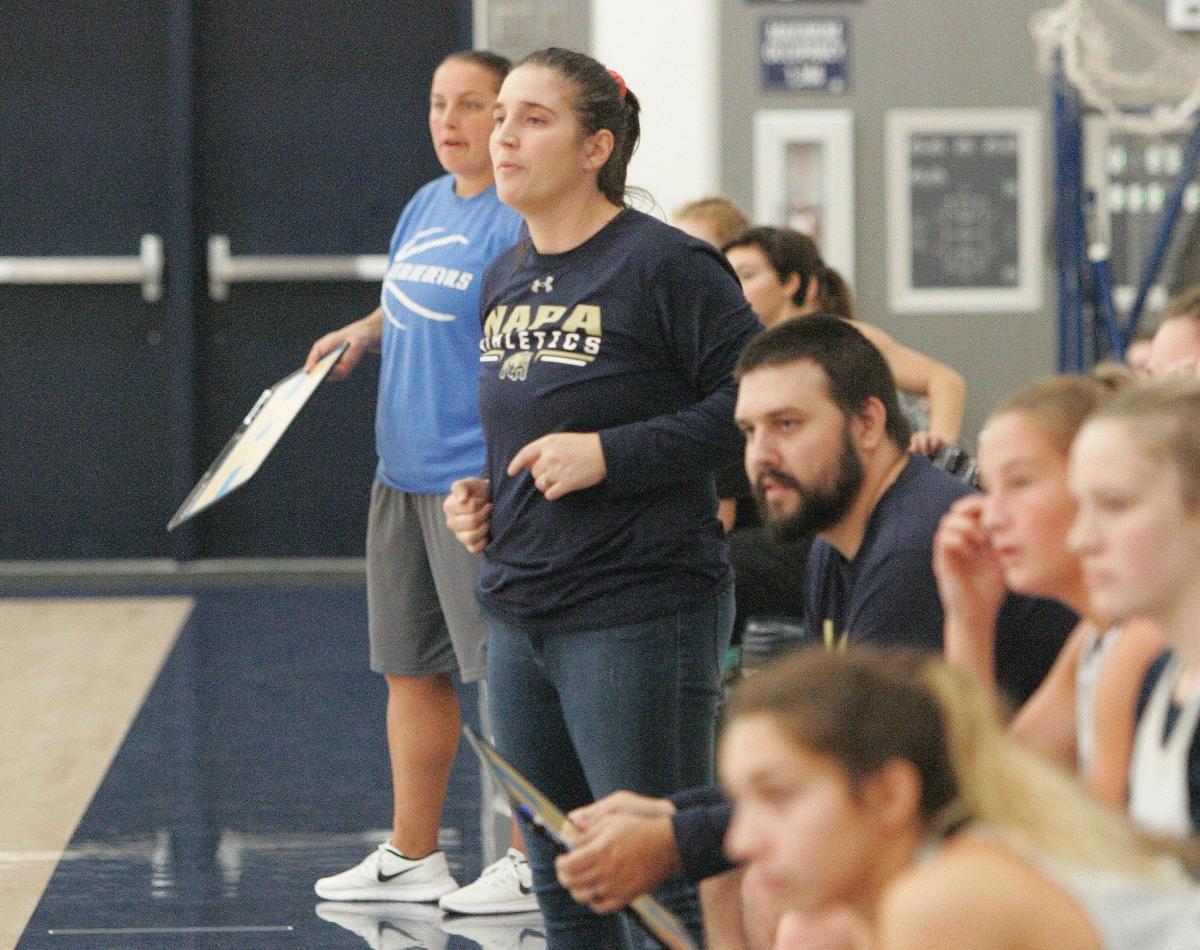 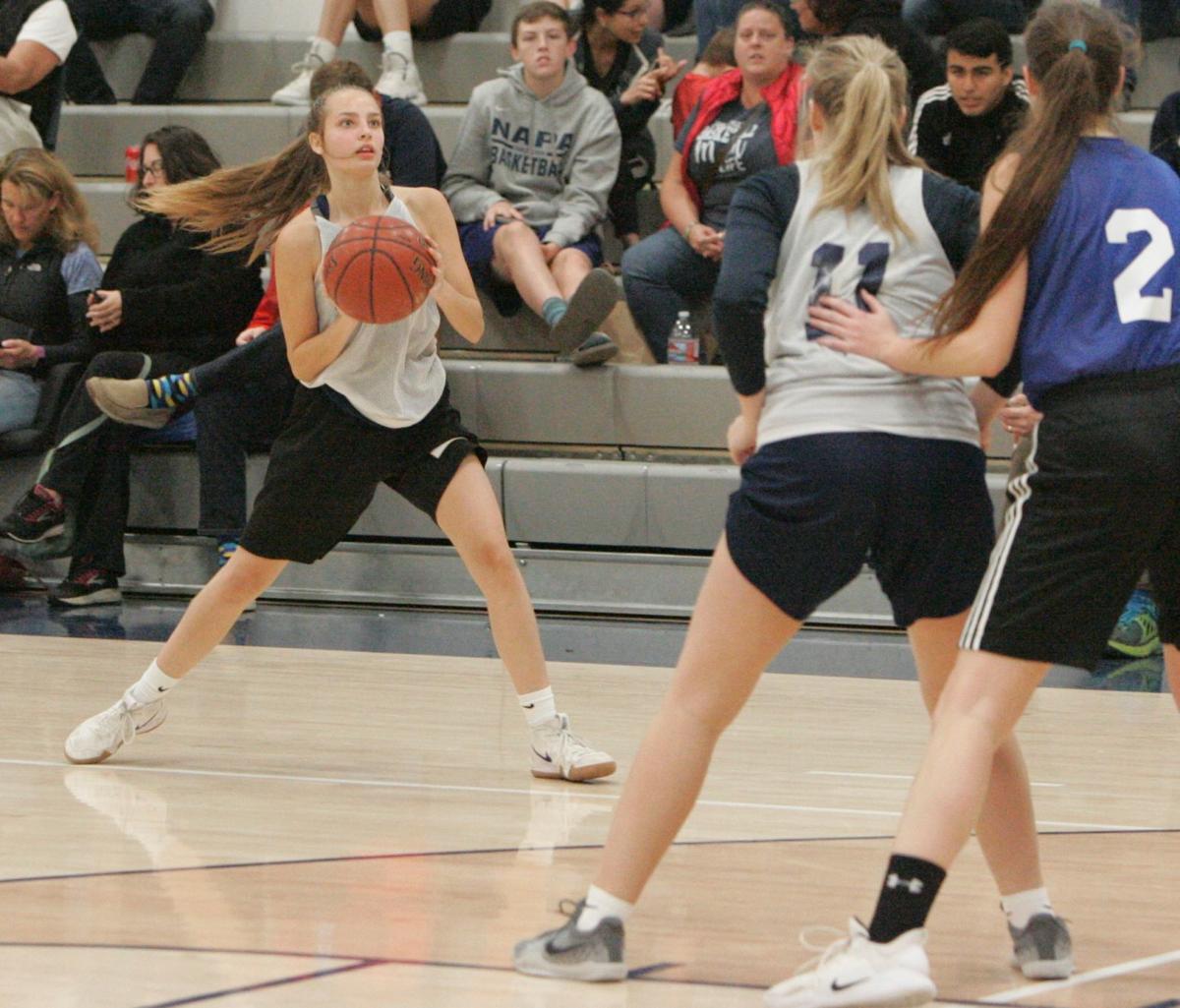 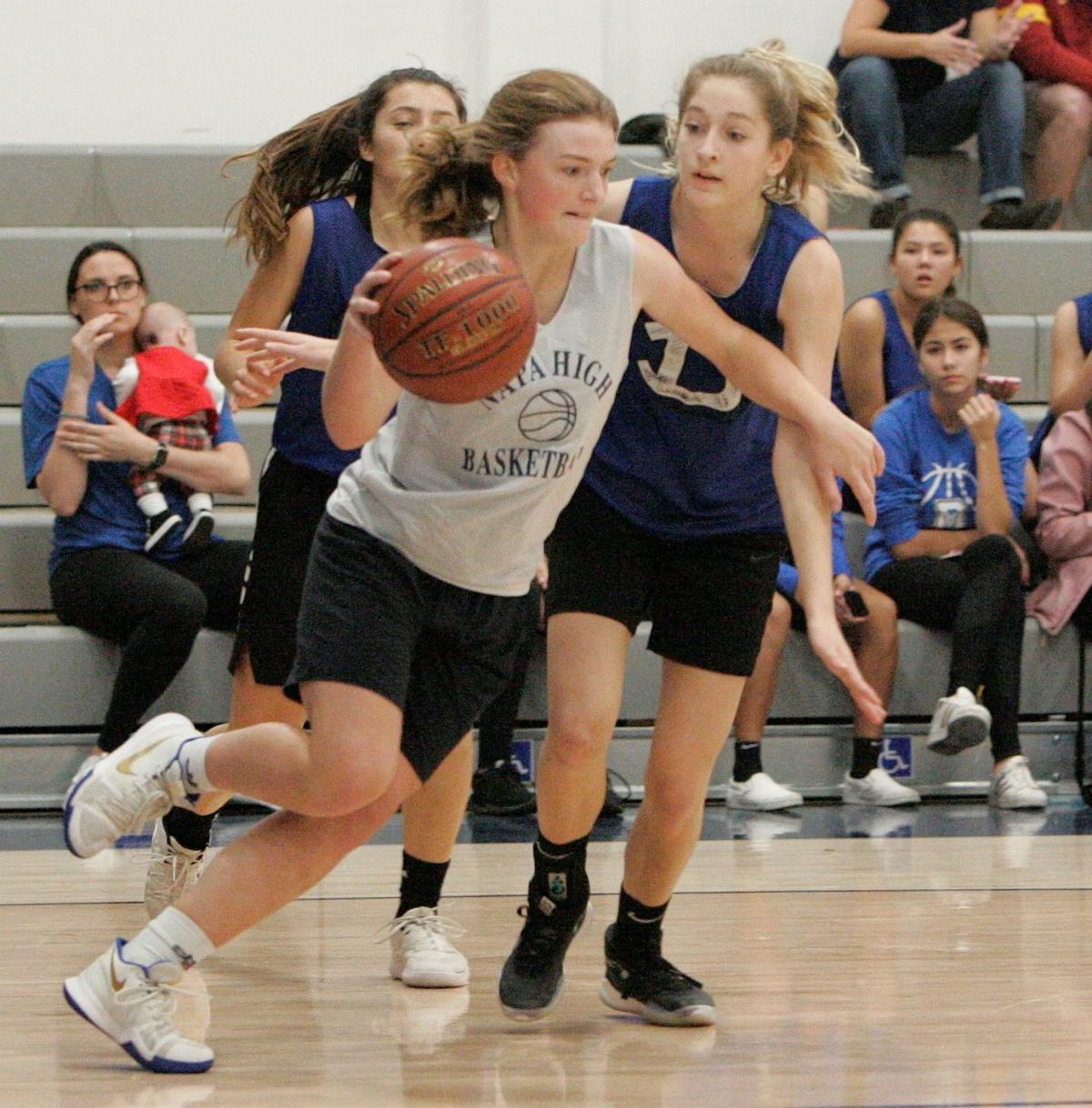 She may be the least experienced girls basketball head coach in the Napa Valley, but Napa High’s Taylor Willis has the most varsity returners and – carrying on the program’s tradition – capable family assistance.

Willis and her husband of seven months, assistant coach Adam Martinez, have taken over for a staff led by Darci Ward and Ward’s sister, Michelle Lewis. Ward, now Napa High’s athletic director, coached Willis for three of her 16 seasons at the helm.

A substitute teacher who is pursuing a state teaching credential from Sonoma State, the 2010 Napa High graduate said she has so far worked only at her alma mater, making her feel almost like an on-campus coach.

“It’s really nice being on campus and a part of the community,” she said. “I have players who come and see me at break and lunch. I hope to teach at NHS eventually.”

Willis is in her fourth year as a coach in the Grizzlies’ program, the first two having been as an assistant varsity coach under Ward and last winter as head coach of a junior varsity team that finished 13-12 overall and 8-3 in the Vine Valley Athletic League.

Four players from that team have come up to the varsity with her to help make the transition more smooth, though Willis has coached the seniors before.

“I started helping Darci as an assistant when the seniors were freshmen, so it’s exciting to see how much they’ve grown and be able to continue to be a part of their growth. I also have a great relationship with my JV group that moved up this year and so having those connections have really helped with the jump,” she said.

“There have been some challenges but for the most part I’m really enjoying myself. Of course, there are going to be bumps when there is a change in leadership and it’s a learning curve moving up to varsity. But I love the speed, intensity and pressure. The hardest part is probably having to not only manage my own team but an entire program, and I’m lucky that I have Darci as the AD supporting me along the way.”

Right by her side is Martinez, a 2010 graduate of Granada High in Livermore who is much more than a yes-man husband for Willis on the bench.

“Adam has played basketball his whole life, just like me,” she said of Martinez, a former Granada player whose father has been a high school basketball coach for over 30 years. “He has been coaching the Granada girls JV for the last 16 years, which Adam has helped with whenever he could.

“Adam has a high basketball IQ and last year he came to almost everyone of our games and took stats, sitting behind the bench and lending his knowledge and then discussing and analyzing after each game. It’s really nice having him by my side because he isn’t afraid to step on my toes. I know he’ll be honest with me no matter what and, in the end, we have fun bouncing ideas off each other. We have a good balance.”

The Grizzlies have seven seniors, five of whom were on the varsity last year; the other two were in the program before skipping last season.

“It’s exciting,” Willis said of having a seasoned lineup. “I’ve known them all since they were freshmen and I think what is most exciting is that we are in a good place right now and they are still nowhere near their potential. All the seniors and juniors have played with each other for years and with that comes great chemistry and trust, and we are just going to continue to build on those foundations.”

Here is a look at this year’s team, with comments from Willis:

Anna Ghisletta, senior captain, shooting guard-point guard: In her fourth varsity season, she joined the team Monday after finishing her cross country season at the North Coast Section Championships on Saturday. “She’s high energy, positive and a great asset on both sides of the ball. She is definitely an anchor for this team.”

Charlotte Gerard: senior captain, shooting guard: “She’s really come out of her shell in just the last few weeks of practice. She’s been a vocal and positive leader and I’ve been really impressed with her transition and on-ball defense.”

Maizy Armstrong-Brown, junior captain, point guard: “Maizy breathes, eats and sleeps basketball. She is constantly asking questions and wanting to approve. Her determination is a huge motivator for her teammates and she has done a great job over the summer improving her on ball defense and developing her finishes.”

Maddie Shipp, senior shooting guard: “Maddie has been really vocal, and she brings a lot of energy on defense. I’m really excited to see her becoming more confident in her offense as well and not being afraid to take shots.”

Hannah Newman, senior power forward-center: “Hannah is long and has really active hands on defense and we will continue to hone those defensive skills, which will be scary for opposing post players.”

Rosie Scaduto, senior power forward: “Rosie is the type of player that comes out of nowhere. She is constantly surprising on offense and defense. We just need to continue to work on consistency.”

Devan Wickersham, senior shooting guard-power forward: The best golfer at the school, having made the NCS Division 1 Tournament the last two falls, she’s back on the basketball court after skipping last season. “It’s like she hasn’t skipped a beat. Devan is fearless and doesn’t shy away from contact, and she never gives up on defense.”

Cali Olmstead, senior small forward-guard: “Cali brings so much energy and she is always hyping her teammates up. She is also making the transition of missing a year but has been working really hard, and improving every day. Plus, she doesn’t play scared.”

Sophia Mostow, junior point guard, shooting guard: The best tennis player at the school, Mostow is coming off her best season in that sport. “Sophia is an impressive finisher, and her shot has really developed. She will have an adjustment this season coming from being a starter on JV, but I’m excited to see her grow as a leader this season and bring energy with her length on defense and skill set on offense.”

Julie Solomon, junior center: “Julie has been working really hard to develop her post moves. Once she gets a little more confident in them, she is going to be scary to defend.”

Grace Sedgley, junior small forward-forward: Sedgley also joined the team this week after finishing cross country on Saturday. “Grace is always in the right spot on offense. We just need her teammates to find her a little bit more. She is also one of the only players I can always count on to box out and lay out for loose balls.”

Maddie Alexander, junior guard: “Maddie brings a lot of energy, even when she isn’t in the game. She is constantly working to improve, often staying after practice. She is another player I can count on to dive for loose balls and give her all.”

Sofia Tinnon, sophomore power forward: The track and field team’s best thrower qualified for the NCS Meet of Champions in the shot put last spring. “Sofia is a beast. She always finds a way to get boards and has an incredible way to finish at the basket. She has been working to adjust to the speed of varsity as a sophomore and has done a great job so far.”

As experienced as the Grizzlies are, they were expected to have two more senior returners. But Carly Johnson – an All-County Player of the Year finalist the last two seasons – and Faith Bartlett opted not to come back for their fourth seasons.

“Both Carly and Faith decided to stop playing this year for their own personal reasons. Both did attend summer conditioning and are still at Napa High,” Willis said. “Of course it’s hard to lose two veteran seniors and it has been an adjustment for myself and for the team. It’s a challenge, but the team has really rallied around each other and it has also allowed for other players who may have not stepped up to become leaders.”

Willis said she and Martinez were still figuring out their starting lineup coming into Tuesday’s 6 p.m. Foundation Game against Vallejo, and Saturday’s 4 p.m. season opener at Amador Valley-Pleasanton. While the cross country runners were expected back, two other players were expected to be gone because of Thanksgiving trips.

“We’re still working on who our starters will be, and it sometimes will depend on matchups as well,” she said. “We’re looking forward to getting the entire team together officially on Dec. 2 and really solidifying our roles. I’m really excited for this season and our potential. They are a fun group that is really coming together and we’re confident in our ability and the opportunity we have this season.”