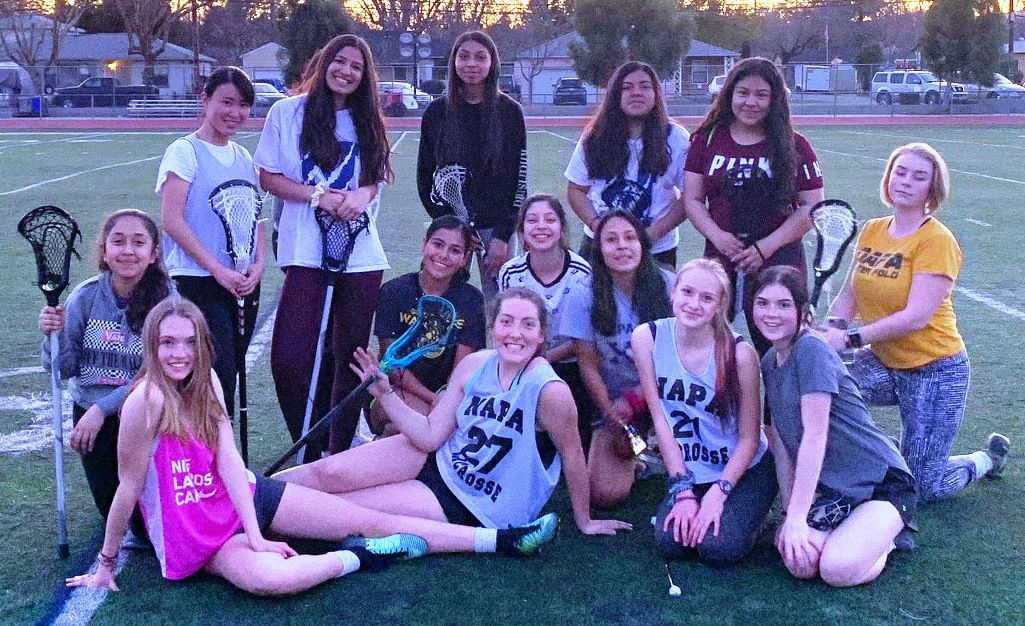 Members of the first-ever Napa High girls lacrosse team pose after a recent practice. The Grizzlies never got to play a game after practicing for a month.

Sean Capiaux was ready to hang up his whistle after coaching girls lacrosse for the last decade.

There were some years when he coached for both the Napa Youth Lacrosse Club Force and Justin-Siena High School – whichever teams for which his daughter, 2019 Justin-Siena graduate Olivia Capiaux, played.

“When I heard that Napa High had no coach and that they would have to abandon the sport if they didn’t find one, I volunteered,” said Capiaux, who never played the sport when he attended Gunn High of Palo Alto because it wasn’t offered there.

He not only helped coached Force girls teams in the under-11 to under-15 age divisions, but was also the girls director and a board member for the club.

“I also organized and coached a travel team of Napa girls for a couple of summers called the Napa Rebels and coached a girls club team, Madlax, for one year,” he added.

The Grizzlies started practicing Feb. 10, a week after he was hired, and trained five days a week –

right up until March 12, when the season was put on hold due to the coronavirus pandemic.

“We had a great turnout of girls wanting to play lacrosse during its inaugural season at NHS – a total of 29, with only four ever having played the game before,” Capiaux said. “Normally I would not have had such a large roster, but I didn’t want to turn anyone away from trying the sport for the first year.

“The first two weeks were a lot of basics – stick work and conditioning – to get them up to a level where we could start to learn the game and how it’s played. We had some really talented girls on the team who had played other sports but never lacrosse. I felt that out of the 29, with our four experienced girls, we could have put together a quality starting lineup as the rest of the girls came up to speed.”

The Grizzlies were scheduled to open the season on March 19, a week after the COVID-19 shutdown, and then play a Big Game on March 26 against crosstown rival Vintage’s own first-year squad at each team’s Harvest Middle School home field.

They did get to scrimmage Justin-Siena, which is in its ninth season of existence.

“That really gave the girls a chance to see how the game was played,” he said. “We made the scrimmage more into a learning session rather than a straight-up game.”

Expected to lead the team was its one captain and only senior, Lainey Laband, who played JV basketball last year.

“Lainey is great,” the coach said. “She is an experienced lacrosse player who grew up on the East Coast, where lacrosse is more common. The girls looked up to her and she was always there for me to either help with practice or communicate with the team. Since I came on so late, I did not have any help (assistant coaches) and keeping 29 girls’ attention can be a challenge, so Lainey was great with keeping things focused.”

“A brave group of sophomores came out to try this new sport and I look forward to seeing them develop their skills in the next few years,” Capiaux said. “Several of them would have been starters for me this year.”

There was also one freshman, Luna Garcia.

The season wasn’t canceled entirely until Friday, when the CIF and North Coast Section announced that there would be no playoffs for any spring sports.

“Up until then, I held out hope that we could resume our season or get a tournament in at the end of the school year,” Capiaux said. “I let the girls know (Friday) and they handled it very well. I think with all that’s happened, they were prepared for bad news.

“Fortunately I hope to have them all back for next season except for Lainey and one foreign exchange student. I feel bad for Lainey as a senior and captain. I’m hoping that we can do something for all the senior players in spring sports.”

Members of the first-ever Napa High girls lacrosse team pose after a recent practice. The Grizzlies never got to play a game after practicing for a month.