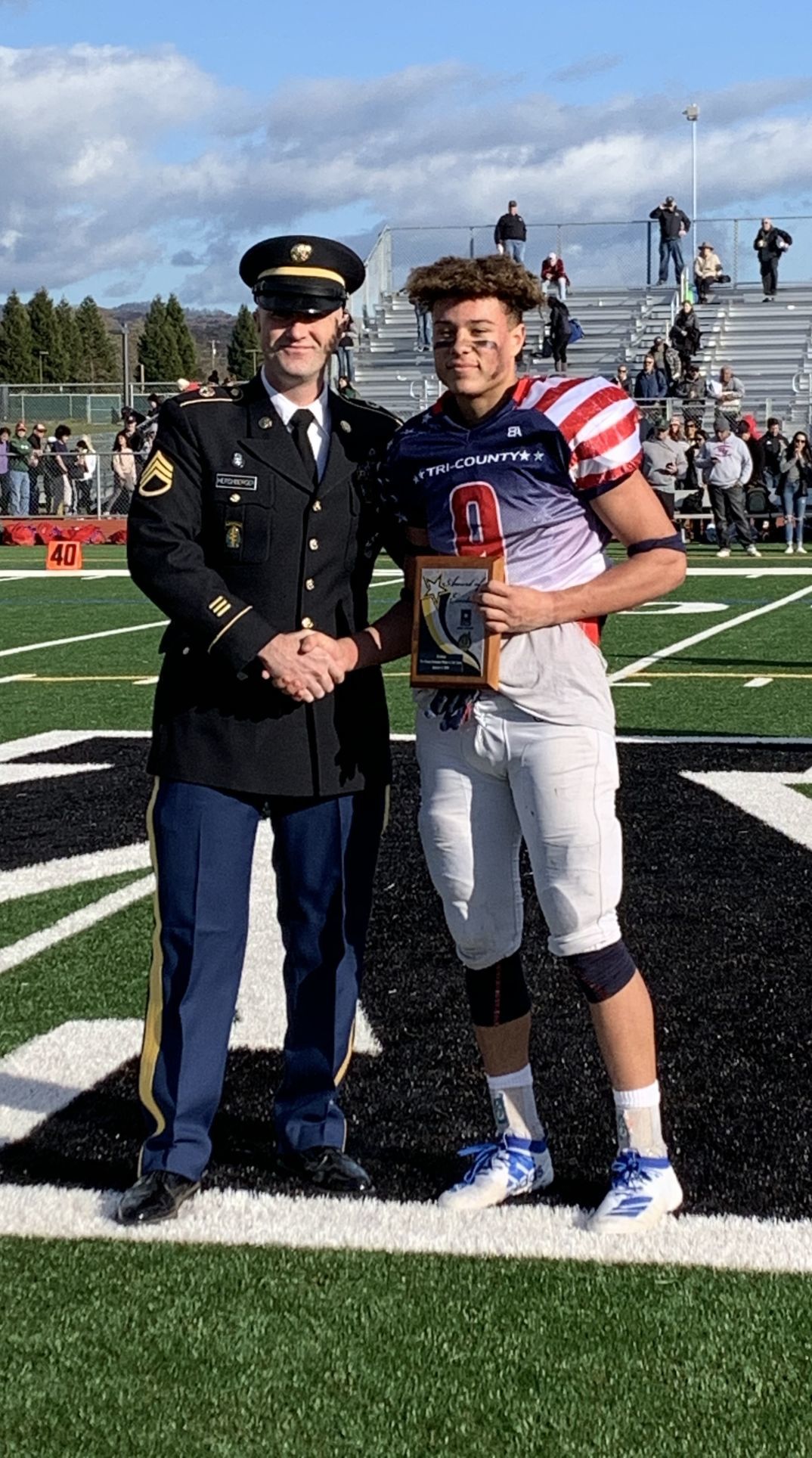 Justin-Siena's Miles Williams was named the game's Defensive Most Valuable Player. The all-league linebacker sealed the 16-8 win for the Blue Team with a 50-yard pick-six in the fourth quarter. 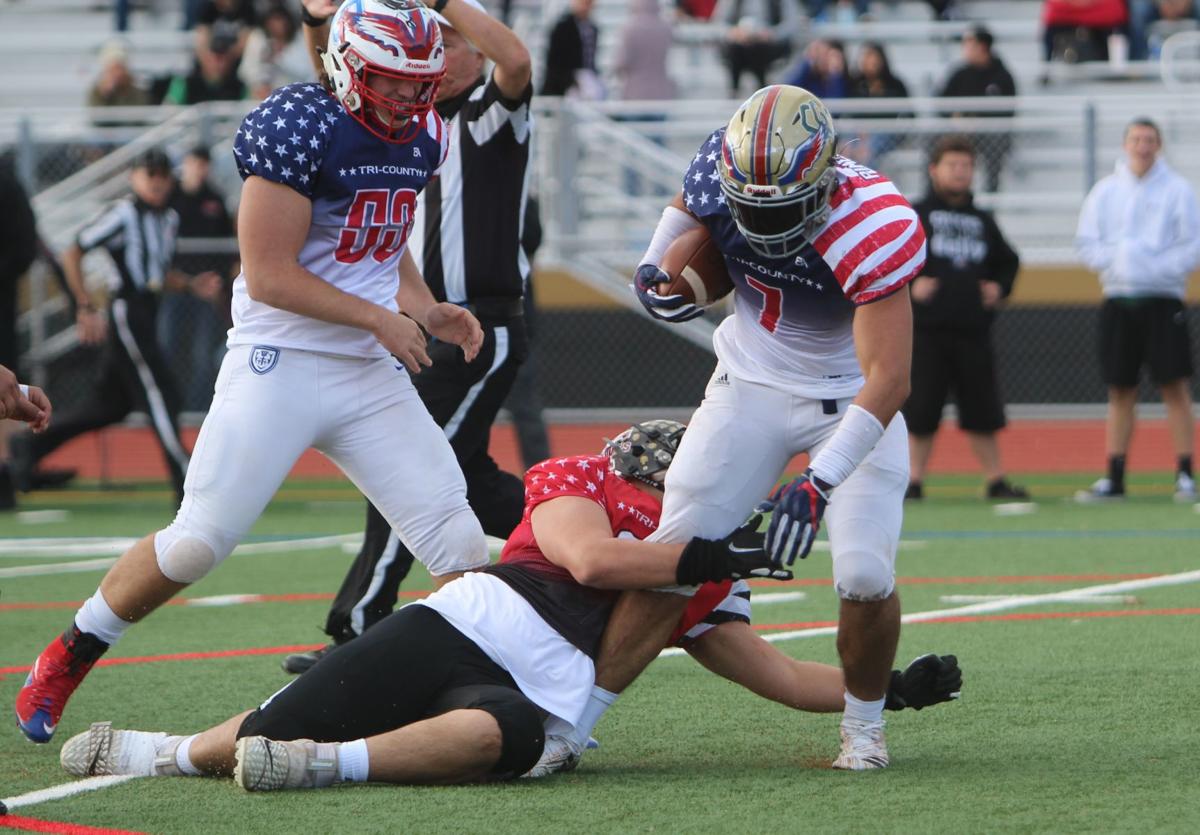 Napa High's Jesus Pimentel (7) works to break a tackle. Usually a defensive player, Pimentel took reps as a running back on Saturday and scored the game's first touchdown on a two-yard run in the second quarter. 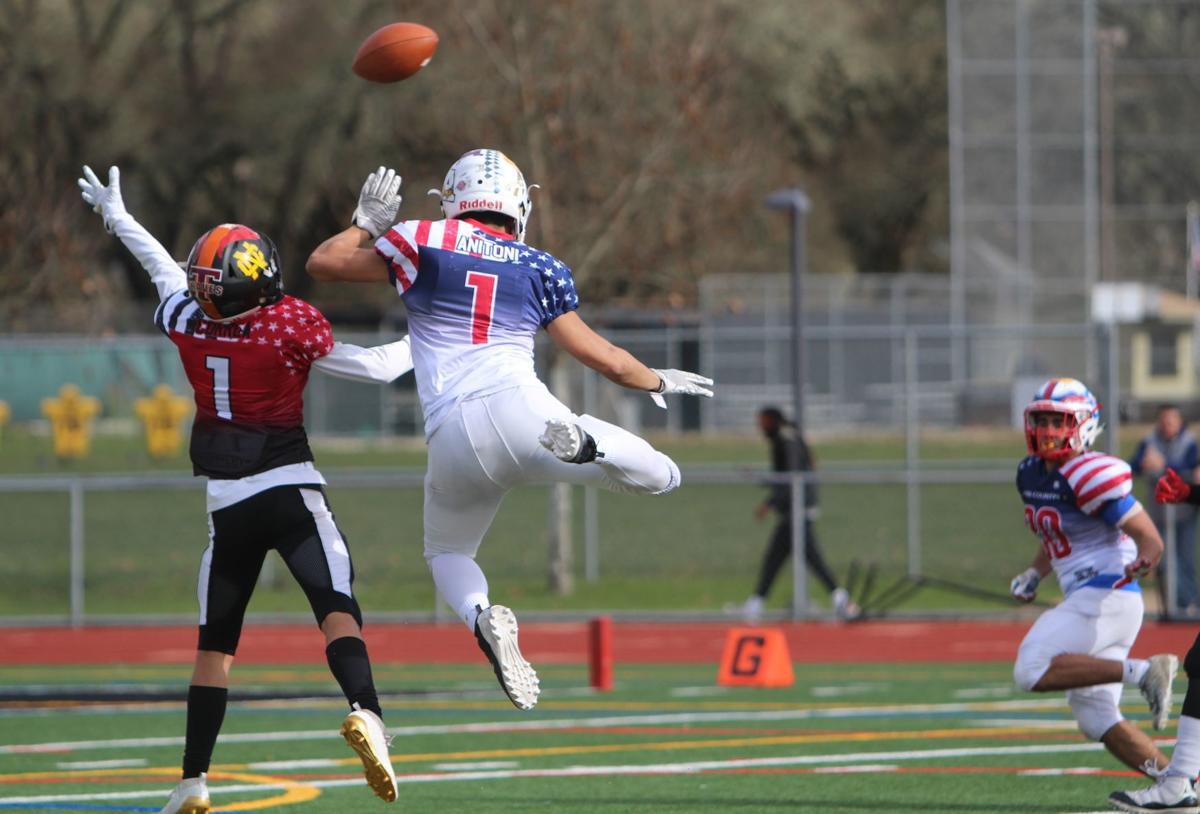 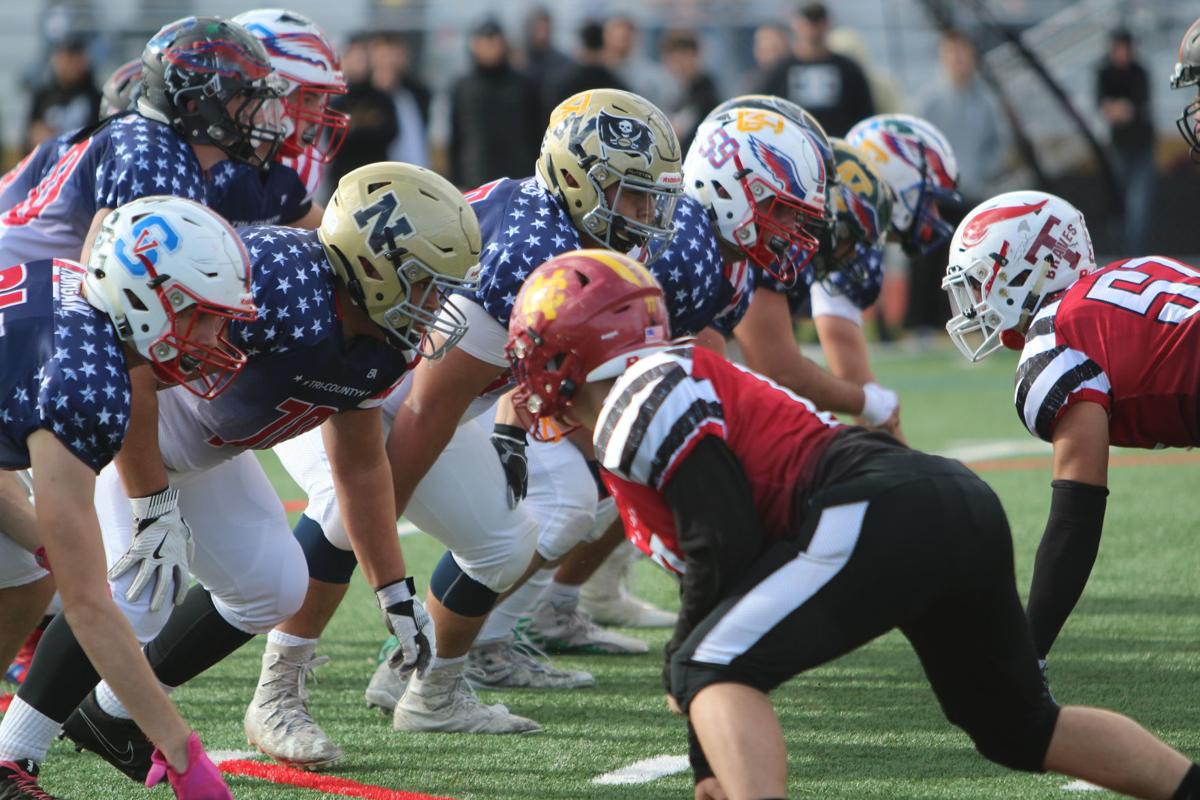 Napa High's Filiberto Chavez (70) and Jose Santos (75) get set before a play. 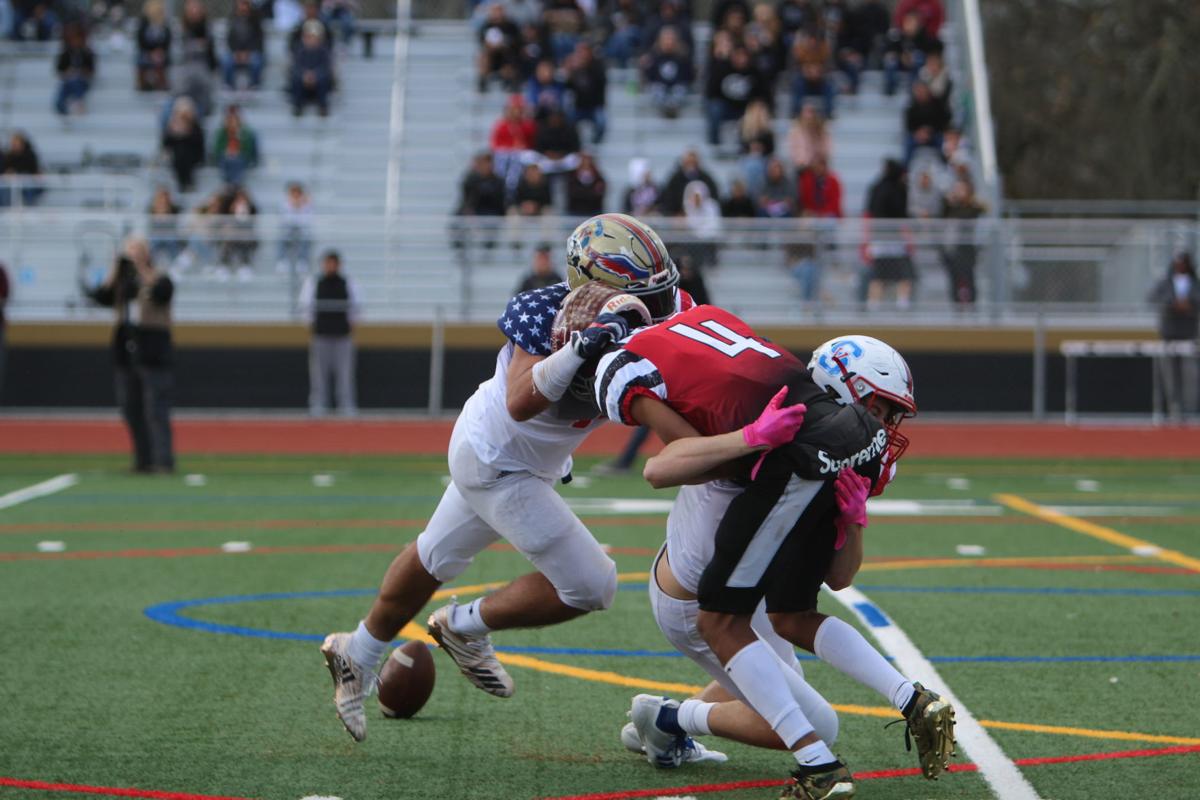 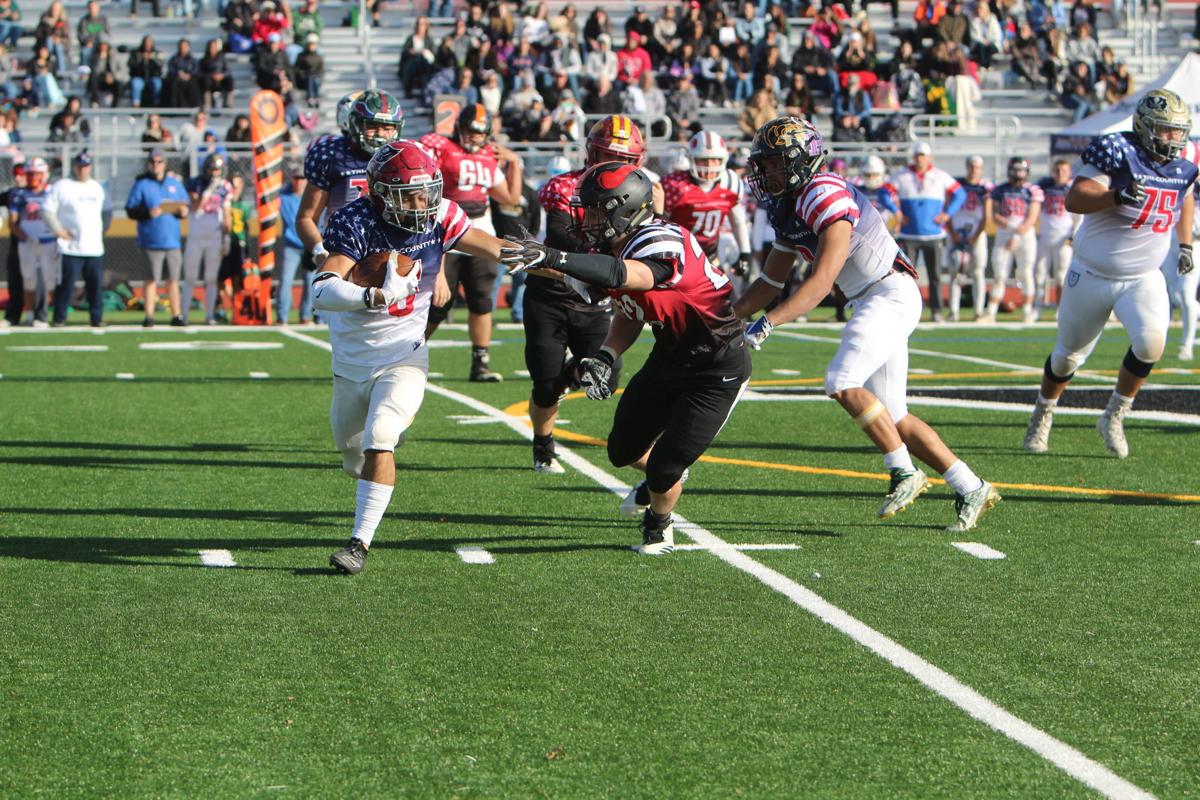 Vintage's Mauricio Castro tries to turn the corner as a defender from the Red Team closes in.

Justin-Siena's Miles Williams was named the game's Defensive Most Valuable Player. The all-league linebacker sealed the 16-8 win for the Blue Team with a 50-yard pick-six in the fourth quarter.

Napa High's Jesus Pimentel (7) works to break a tackle. Usually a defensive player, Pimentel took reps as a running back on Saturday and scored the game's first touchdown on a two-yard run in the second quarter.

Napa High's Filiberto Chavez (70) and Jose Santos (75) get set before a play.

Vintage's Mauricio Castro tries to turn the corner as a defender from the Red Team closes in.

WINDSOR – Napa Valley athletes stole the show on both ends of the field at the seventh annual Tri-County All-Star game on Saturday.

Justin-Siena’s Miles Williams and Napa High’s Jesus Pimentel, two of the 16 seniors from Napa schools selected to the game, scored both touchdowns for the Blue Team to lead them to a 16-8 win over the Red Team at Windsor High.

Pimentel scored a rushing touchdown early in the second quarter while Williams found the endzone on a 50-yard pick-six midway through the fourth quarter that proved to be the game-winning score. Williams also recorded a strip sack in the first half and forced another fumble, which was recovered by Pimentel, on a sack on the last play of the game. For his efforts, Williams was named the game’s Defensive Most Valuable Player.

“I just decided to go out there and give it my all,” said Williams, MVP plaque in hand. “It’s one of my last couple games, I have one more after this, but still it’s ticking down. I’m done with league football so I just thought I’d give it everything I got, go 110 percent all the time. What’s there to lose?”

Williams will also be participating in the Battle of California on Jan. 18 at Laney College in Oakland. The game will pit top players from the Bay Area against some of Southern California’s best. He’ll have a chance at bringing home a third MVP award, having also been named the MVP of the Bay Showcase in December.

The Tri-Valley All-Star game featured the best seniors from Marin, Sonoma and Napa County. One of the main focuses of the event is to bring awareness to the thousands of kids in foster care in Northern California. Organizers, including Valley of the Moon children’s center, held a backpack donation drive where each backpack donated would be given to a foster kid.

Eighty-one seniors from 25 different schools made up the two teams.

“It means a lot,” Williams said of being chosen to represent the Napa Valley. “I just see it as another opportunity for me. I’m just blessed I can come out here and play with these wonderful people again. It’s nothing like a league game, there’s a lot more competition. Everyone out here is a great player and they were selected for this team for a reason.”

Pimentel – a 6-foot, 220-pound linebacker who was fourth on the Grizzlies with 28 tackles and tied for the team lead with four sacks this fall – was selected for the All-Star game because of his defensive prowess but took on a new role on Saturday. He was one of several players that rotated in at running back and the only one that scored a touchdown.

The St. Vincent coaching staff, which led the Blue Team on Saturday and throughout practices this past week, was enamored with Pimentel’s size and strength. So when faced with a potential scoring opportunity in the second half right on the Red Team’s goal line, they decided to run a play for him.

“We watched his highlight reel so we knew what kind of athlete he was,” said St. Vincent assistant coach Casey Aiwohi, who served as the Blue Team’s head coach on Saturday. “That package was actually called ‘Beast’ and we wanted the beast sitting back there with the ball and a bunch of guys leading up for him.”

It was the first touchdown that Pimentel said he’s ever scored.

“I’ve never played running back or had anything to do with running the ball, but I kind of just envisioned in my head, like, you got to punch it in, you got to go full-on beast mode and just run it in,” he said. “That’s the mentality I had – you just got to be a beast.”

“I asked him after he scored that touchdown ‘Was that your first high school touchdown?’” Aiwohi said. “He said ‘That was the first time I’ve ever touched the ball on offense.’”

Aiwohi said that the play of Williams and Pimentel was not surprising. The coaching staff knew pretty early this week what they had in the two.

“Pimentel is amazing and then Miles sealed the game with that pick-six,” he said. “We knew that coming into this game just practicing for a week with them. We knew who the dudes were.”

While Pimentel and Williams got most of the recognition from the win, several other Napa Valley seniors contributed as well.

Vintage running back Mauricio Castro kept the defense honest with the handful of carries he got. American Canyon lineman Jeffery Brown had a big sack of Piner quarterback Yonaton Isack late in the fourth quarter, and two plays later Justin-Siena’s Solome Anitoni had a key tackle on fourth-and-one that kept the Red Team from converting.

The other Napa Valley selections present on Saturday were Kaave Gaviola (American Canyon) and Justin Del Rosario (American Canyon). St. Helena lineman Ryland Campos was selected to the Red Team but was not present.

For the Napa Valley players who suited up, one of the biggest takeaways was simply being able to end their football careers with a win, even if it wasn’t for a section or state title.

“The fact that we won, I mean we lost our playoff game so it’s cool to know that I ended my senior year with a win,” said Low. “But I feel honored to be playing on this team.”