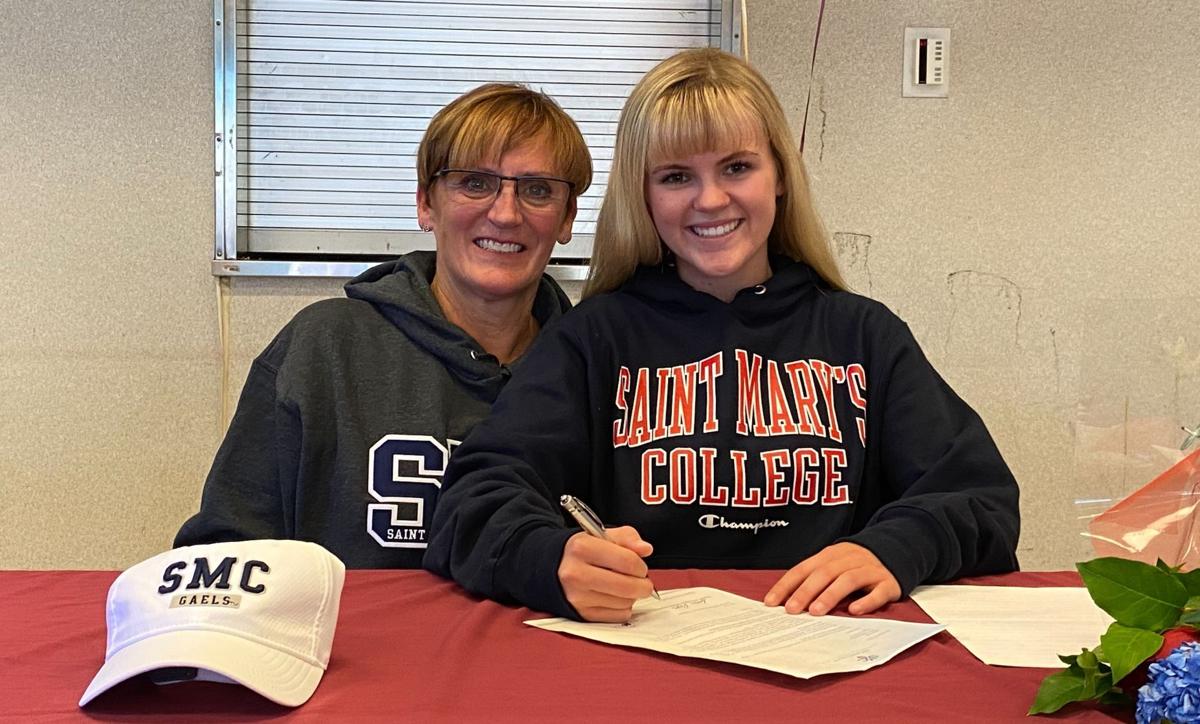 Vintage High senior Jamie Pope, with mom Terri Pope behind her at a Nov. 10 ceremony, looks up after signing her national letter of intent to play tennis for Saint Mary's College of Moraga. 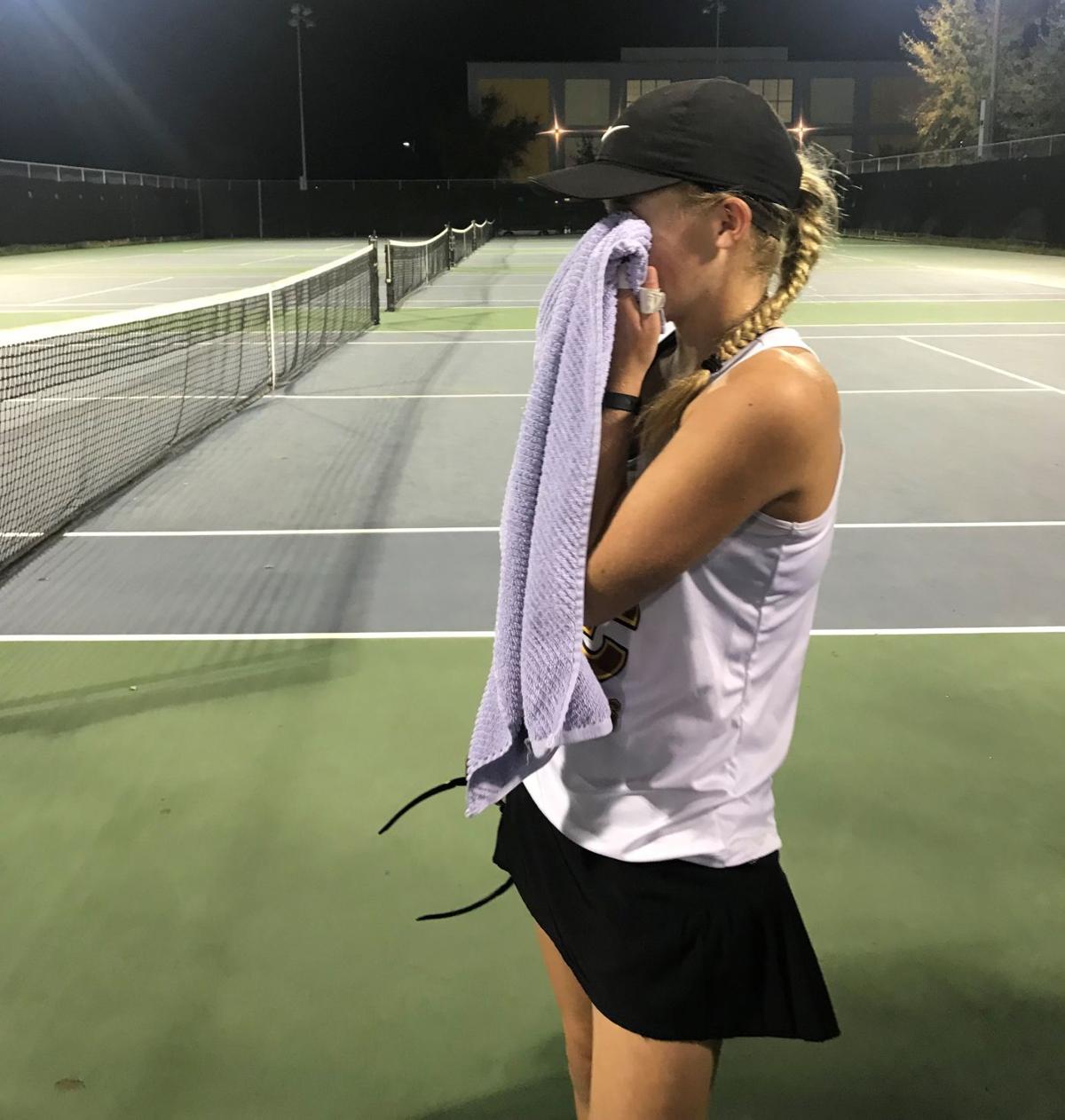 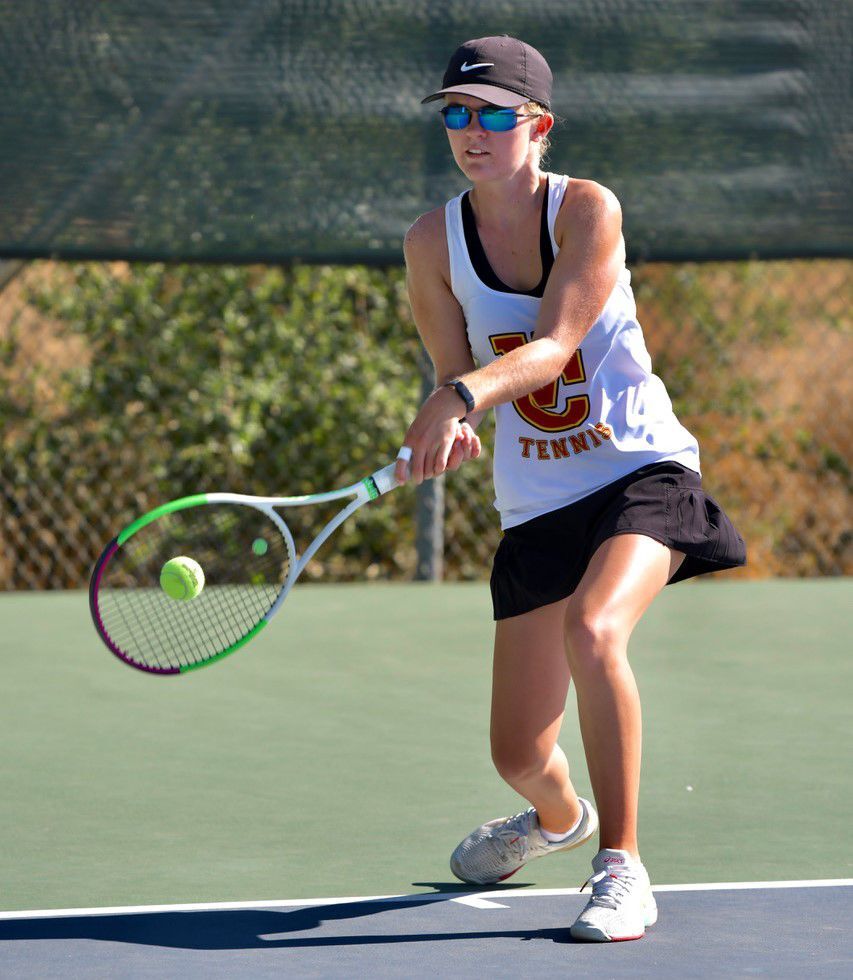 It was Nov. 10, five days before Jamie Pope was to play in the biggest tournament of her Vintage High School tennis career, and she wasn’t very composed.

She had just signed a national letter of intent to continue her tennis career with the NCAA Division I program at Saint Mary’s College. Her mother, Terri, and uncle had also attended the Moraga school, so mother and daughter shed a few tears at the ceremony.

“What I love is she had this dream,” Terri Pope said after the ceremony in the Vintage cafeteria. “She had this vision and she made it happen. She fell in love with the Saint Mary’s campus when we went to a tennis tournament there. It’s hard not to love that school.”

Asked after the ceremony about her upcoming North Coast Section Division I Singles Championships, Jamie Pope said “It will be a good tournament. There’s some good players playing. It’ll be a strong draw. A lot of the girls are girls I play in USTA tournaments, so there’ll be some familiar faces. I’m excited to hopefully make a good run this year, especially since it was canceled last year because of COVID.”

The next day, she advanced to the championship match without having to lift her racket when her semifinal opponent defaulted. But she showed she belonged in the final by winning 6-2, 6-0.

She did it all without having to impress any college scouts, as she was already going to be a Gael, though being a section champion — the first from the Napa Valley in the sport since Phil Holbrook won the Sac-Joaquin Section Division I boys singles crown in 2008-09 — might help her get on SMC’s starting ladder more quickly.

The tournament wasn’t this easy for Pope as a sophomore two years ago.

“The day before the (NCS) tournament, I was in another tournament and winning the finals match and in the middle of it I very badly sprained my ankle,” she recalled. “I was so stubborn, saying ‘I’m not going to withdraw from NCS’ because it was such a big deal.

“I was in extreme pain. I had three braces on and took all this Tylenol. But I got out there and ended up getting fourth place, so that was a huge deal. I later found out that I had a third-degree sprain and a completely torn ligament. It was pretty bad. The doctor was like ‘You would have been on crutches and you would have out for six weeks’ (if he’d had his way).”

Pope had gone into that NCS tournament off a second-place finish at the Vine Valley Athletic League singles tournament. She had lost in the final to Justin-Siena’s Priyanka Shanker, who was also a sophomore at the time. Shanker had lost in the previous year’s VVAL final to her sister, Parvathi Shanker. Like her sister in her 2019 senior season, Priyanka didn’t come back out for Justin-Siena tennis as a senior.

That opened the door wider for Pope to win her first VVAL singles title.

“Parvathi and Priyanka are very strong players — Parvathi is playing for Navy now — part of me was bummed that Priyanka wasn’t playing this year. Each year I was getting closer and closer to beating her, and the last time I played her I lost 9-11 in the third set tiebreaker. I’ve trained hard, so I wanted to see what I could do against her this year. But we’ve become really good friends and we train together often. We still have that Justin-Vintage rivalry, but we’re good friends.”

Her biggest enemy became the temptation to stop working on improvement if her competition wasn’t a threat. But she found a way.

“I always want to push myself to be the best. This senior year I was like, no matter who was playing in the league I wanted that title, but I wasn’t going to get arrogant because oftentimes you get in trouble when you get cocky,” she said. “Sometimes playing players who maybe don’t hit as hard or spin it as much as you do, or can’t last as long as you on a point, is tough because you get anxious and you just want to end the point. I had to really adjust my game to play (in league) because I couldn’t over-hit when there’s not as much pace coming at you.

“I used a lot of the matches as serving practice. I made this goal at the beginning of the season to see how many aces I could get. I set the goal for 100 and I ended up with like 150. That was kind of a fun little accomplishment, just to keep track of. But staying focused is one thing I’m really strong at — my mental game. No matter who I’m playing, I stay focused and stay intense.”

She didn’t want college to be any more intense than it had to be, though, and said she liked the school’s peaceful atmosphere as much as its tennis program and business program.

“It was just voted one of the prettiest schools in the nation. When you see the campus, you can see why,” she said. “It’s just gorgeous. It’s surrounded by the hills, so you just feel enclosed and that was one thing I loved about it. It feels so safe.”

Making her signing ceremony even more special was that her counterpart on the Vintage boys team, Lucas Bollinger, signed the same day with UC Davis.

“We are both really lucky,” Pope said of herself and Bollinger. “We train together almost every day. I’m lucky to call him one of my best friends on and off the court. We both work really hard and we share that common bond of tennis.”

Whereas Bollinger played basketball as a sophomore and is currently again as a senior, Pope has never played another high school sport. If Bollinger plays basketball to take a break from tennis, Pope does that by playing bass guitar in a classic rock cover band.

“I’ve been in bands since I was 5,” she said. “I used to play the electric guitar, and then about four years ago one of the instructors said ‘Hey, we need a bassist. Do you wanna play bass?’ and I was like ‘Sure, OK.’ I love it. It’s through the Napa School of Music’s Garage Band Program. We have probably four shows a year. We used to play at Silos and Blue Note before the COVID shutdown. That was such a great atmosphere. The energy was just phenomenal. We’ve been asked to play at adults’ birthday parties and one time we played a block party. We’re called ‘Almost Done,’ because the majority of us have been together a while and are graduating and are almost done with the Garage Band program.”

Pope, who won 6-0, 6-0 in every regular-season league match of her high school career except one — in which she won one set 6-1 — was asked if she doesn’t like to miss a bass note, either.

“Exactly, no I don’t,” she said. ”I’m very much a perfectionist all around.”

She wants to major in business at SMC.

“I love fashion, and since I was young I’ve always wanted to get involved in the athletic fashion wear industry,” she said. “My dream job would be on the business side of an athletic fashion wear company, like Nike or something. I’m a huge NFL fan and some of those uniforms I’m not such a big fan of. I like the new Miami Dolphins uniforms and I’m a Saints fan and our colors are good.”

"Jamie's determination and focus are off the charts," he said. "She knows exactly what she wants to do and tunes everyone out, including me."

American Canyon High School has had a very competitive boys basketball rivalry with sister school Vintage since 2019-20, when Vintage won its …

Vintage High senior Jamie Pope, with mom Terri Pope behind her at a Nov. 10 ceremony, looks up after signing her national letter of intent to play tennis for Saint Mary's College of Moraga.