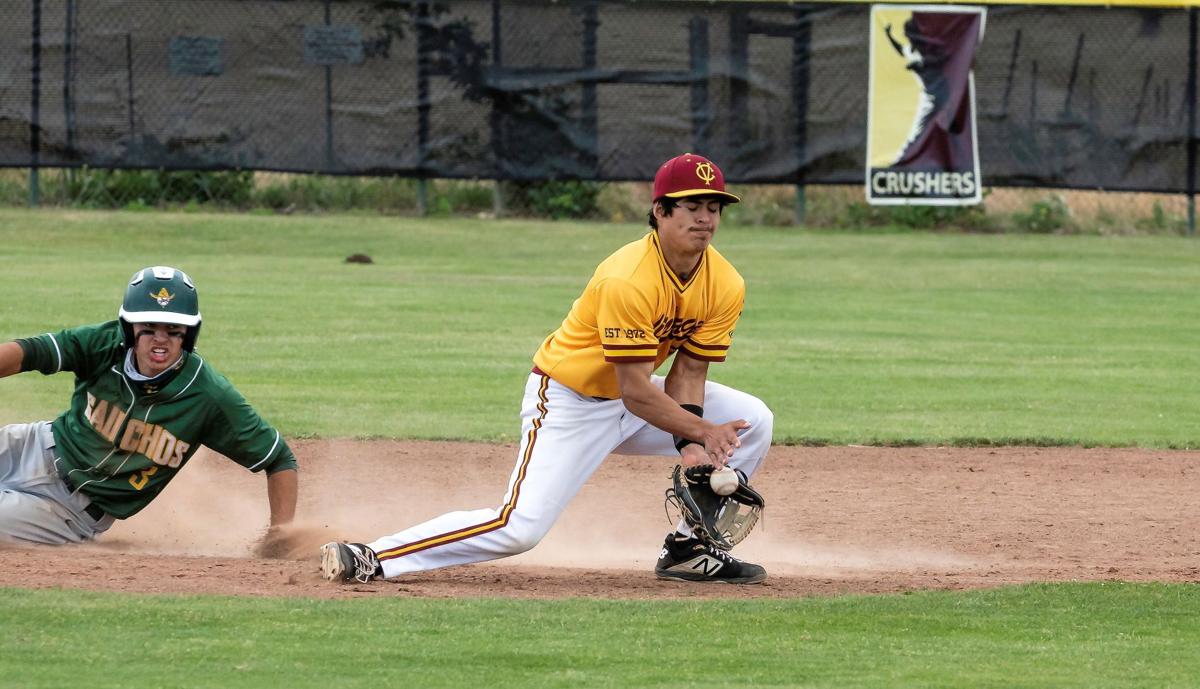 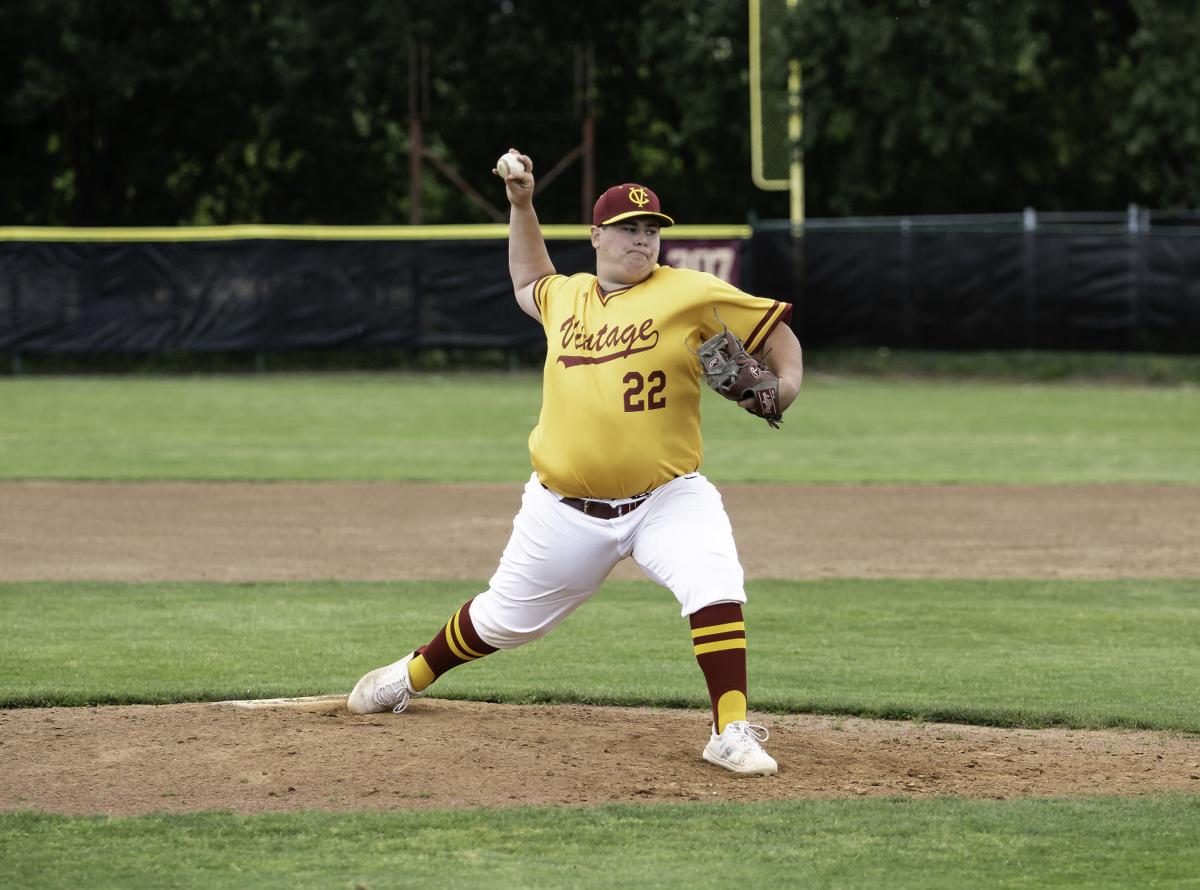 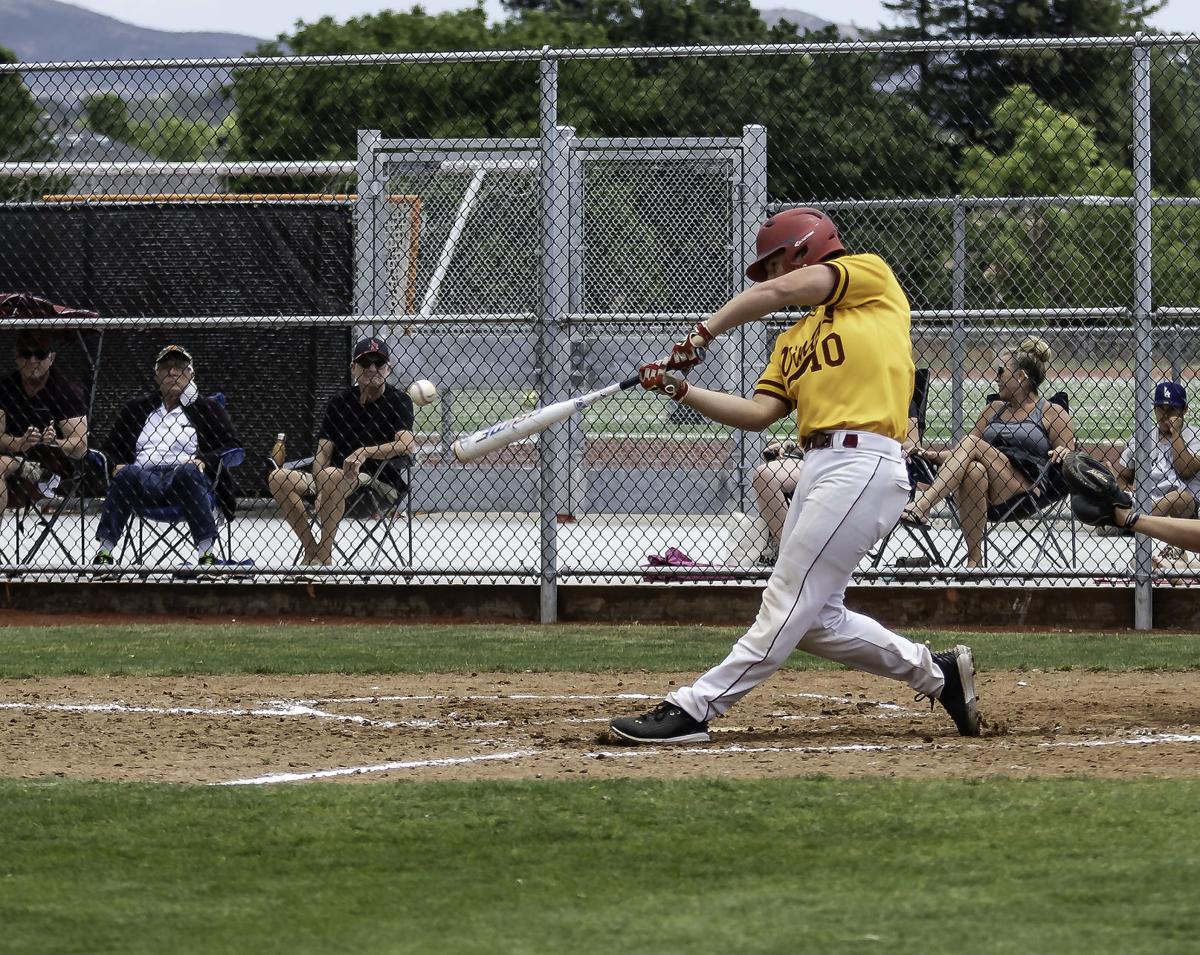 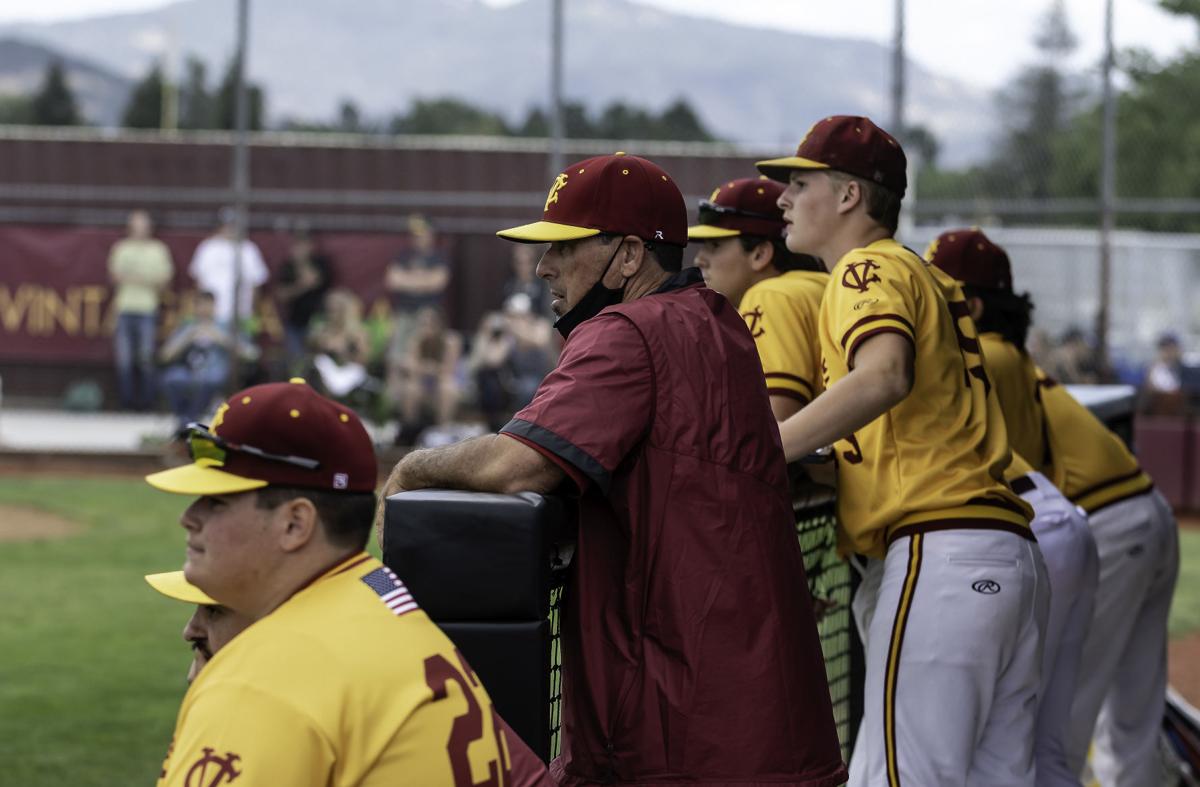 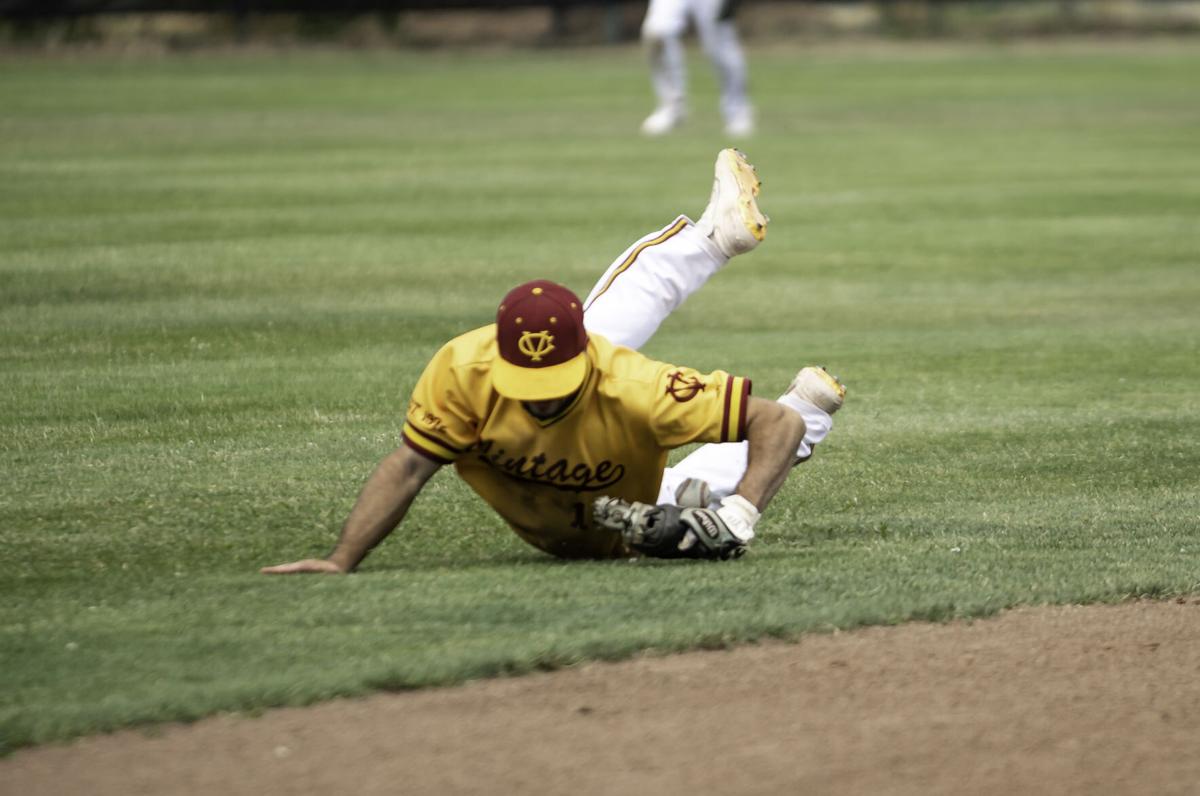 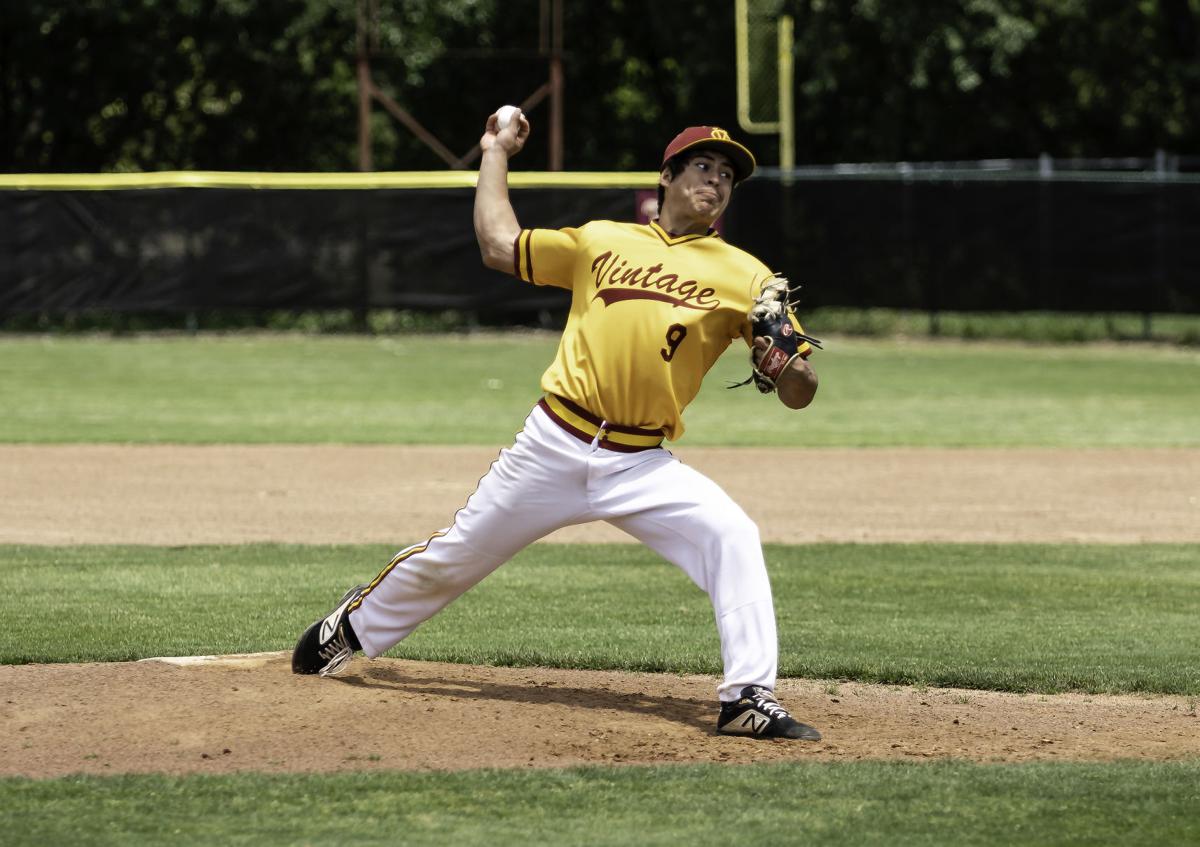 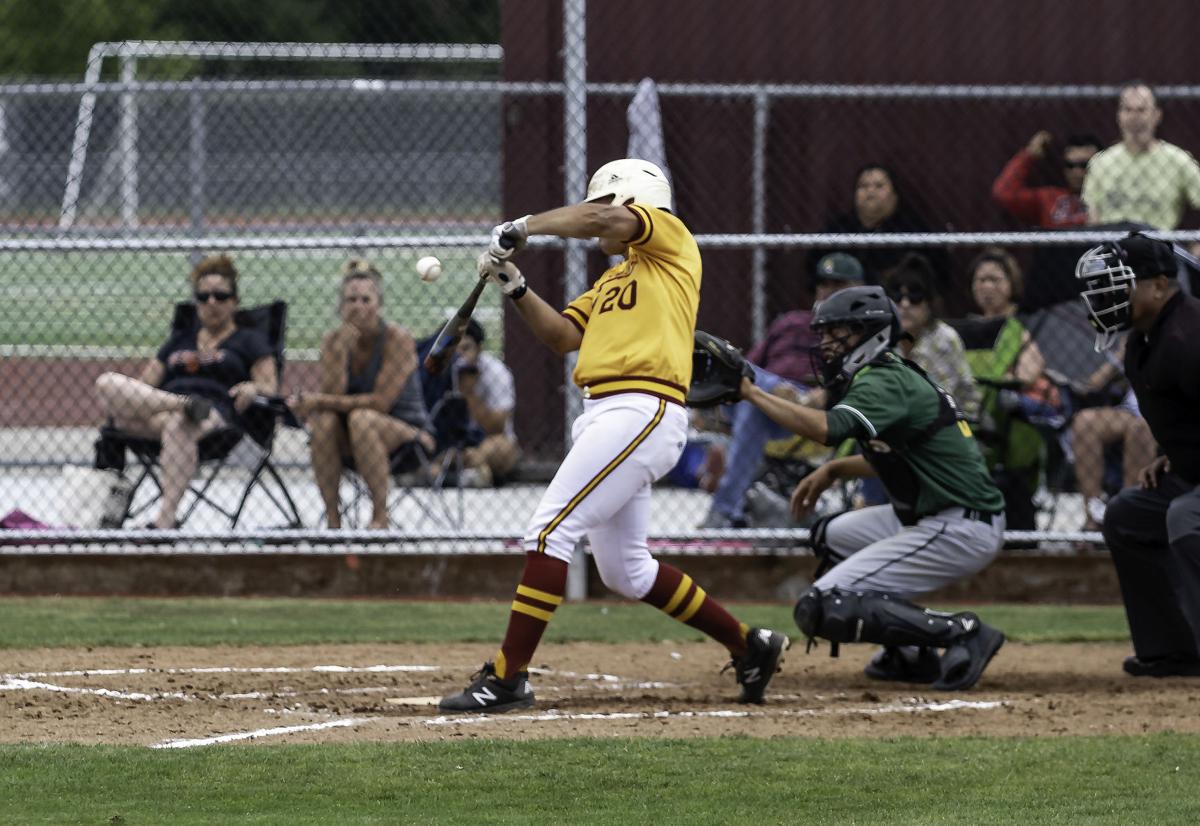 Vintage senior Davide Migotto hits a double before scoring the game's first run in the first inning against visiting Casa Grande on Saturday.

Two of the top teams in the North Bay squared off Saturday afternoon in northeast Napa as Vintage used a three-run fifth inning to push past Casa Grande of Petaluma, 6-3, in a nonleague affair.

“That’s who we want to play,” said Vintage head coach Billy Smith, whose second-place Crushers lost 9-2 at home to the first-place Gauchos last month. “We felt we played a good five innings against them last time and I think it was 5-2 when they opened it up on us. We have been thinking about that loss and we have learned from that loss and we wanted to come out here and establish that we can play with them. So it’ll give us a little something for next Friday, but now we have to go back and think about Napa.”

After hosting Napa High in the second Big Game of the season at 4 p.m. Wednesday, Vintage has its real, Vine Valley Athletic League rematch with Casa Grande in Petaluma at 4 p.m. Friday,

Win or lose Saturday, the Gauchos were guaranteed to still hold a one-game lead on Vintage in the VVAL standings. The league voted in the winter to not award league pennants in any sport, but that doesn’t keep teams from trying to finish with the best record.

“The mindset today was it didn't matter that it wasn't a league game, we were here to win,” Vintage senior Reid McCaffrey said. “We're not here to lose on our home field or lose it all. We're gonna put our best foot forward and do our best and play baseball. We’ve been in a few of these tight games, and we've learned to just keep pushing forward, just keep swinging the bat, don't let the morale change, and just keep pushing on our teammates and keep cheering them on.”

It didn’t take long for Vintage to take the lead. With two outs in the first inning, Davide Migotto (1 for 3, walk, run) hit a double into center field off of Casa Grande starting pitcher Nick Tobin. A hard-hit ball by Ian Avalos (1 for 3, RBI, run) bounced off the shortstop’s glove and went into the outfield to score Migotto from second base.

The Crushers added to their lead in the bottom of the second inning. Jackson Cole (2 for 3, double, 2 runs) started off the rally with a single to left field. Two outs later, with Cole still at first base, Sam Neal (1 for 3, RBI) had a 2-2 count when Cole took off on the pitch. Seeing the hit-and-run signal, Neal hit a line drive that the right fielder misplayed, allowing Cole to score all the way from first.

Jorge Lopez-Rios (4 innings, 7 hits, 1 earned run, 2 strikeouts) cruised on the mound for the Crushers through the first three innings. The senior allowed a few baserunners, but no Gauchos score until the fourth frame. Vincent Glaviano led off the top of the fourth with a single to left that was followed by a single to right by Brice Cox. Dylan Petersen moved the runners over with a groundout and Kaden Ramirez laid down a perfect sacrifice bunt down the first-base line to score Glaviano.

“That's our whole thing, we want to play the game of baseball. We’re not playing the score,” Smith said. “But we both do what good teams are supposed to do. They answer when we answer, and then we answer when they answer, so it's a good battle.”

McCaffrey came in to pitch for the Crushers during the top of the fifth inning and surrendered a walk to Casa Grande leadoff hitter Isaac Sheeks, who stole second and third base. McCaffrey then induced a groundout before hitting Tobin with a pitch.

A few pitches into the next at-bat, Sheeks took off for home in the middle of McCaffrey’s windup. The pitch was outside of the plate and the senior was safe on a steal of home, tying the game. Tobin drew a throwing error advancing to third on the play and scored as the ball rolled into the outfield, giving Casa Grande a 3-2 lead.

“I was talking with the kid who stole home and asked him if we would have caught that pitch cleanly, would he have been out,” recalled Smith. “He said ‘I think I would have been out, but dude, I got to try it.’ That was awesome and that’s another thing about baseball. It can do things that you didn’t think would happen.”

There was a chance this game would turn out similar to the first scrap, as in the first battle Vintage allowed a few errors early which snowballed into a Casa Grande victory. On Saturday, however, the Crushers needed only to wait until the bottom of the fifth to retake the lead.

Alex Dehzad (1 for 3, RBI, sacrifice fly, run) hit a one-out single to center to start the rally for the hosts. After Gavin Rabanal (1 for 2, walk) moved Dehzad to second base with a sacrifice bunt, Jake Lannert entered the game to pitch for the Gauchos.

Migotto was patient at the plate and drew a walk, and Avalos lined a hard-hit ball past the second baseman to score Dehzad. Sam Gomez (1 for 3, 2 RBIs) then gave the Crushers the lead for good. The sophomore roped a double to the left-center gap to score Avalos and Eli Rojas, who was pinch running for Migotto, for a 5-3 lead.

McCaffrey gave up a single in the sixth but stranded the runner, and Cole doubled and scored on a Dehzad sacrifice fly in the bottom half to make it 6-3. Senior closer Connor Smith took over to start the seventh and, after giving up a full-count walk, retired the next three batters to seal the win for Lopez-Rios, who helped his cause by going 1 for 3 at the plate.

“These are the kind of games you want to play, and it just makes kids better for baseball and for life,” said Coach Smith. “You love to see kids competing on both sides of the ball.”

No-Hitters Are Good For The Game: Here Is Why

Rick Horrow joins and explains why no-hitters are important to the game and they are good for baseball.

Vintage senior Davide Migotto hits a double before scoring the game's first run in the first inning against visiting Casa Grande on Saturday.