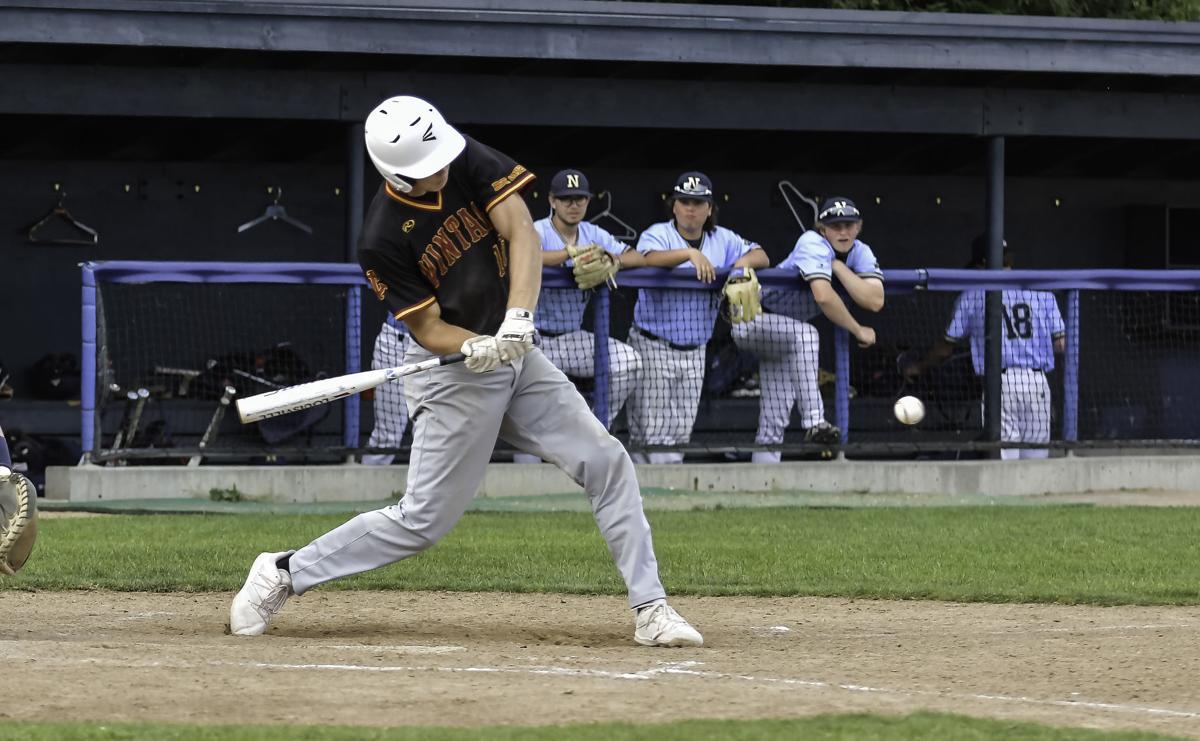 Vintage's Nick Schuttish gets one of his pair of two-RBI hits on Friday. 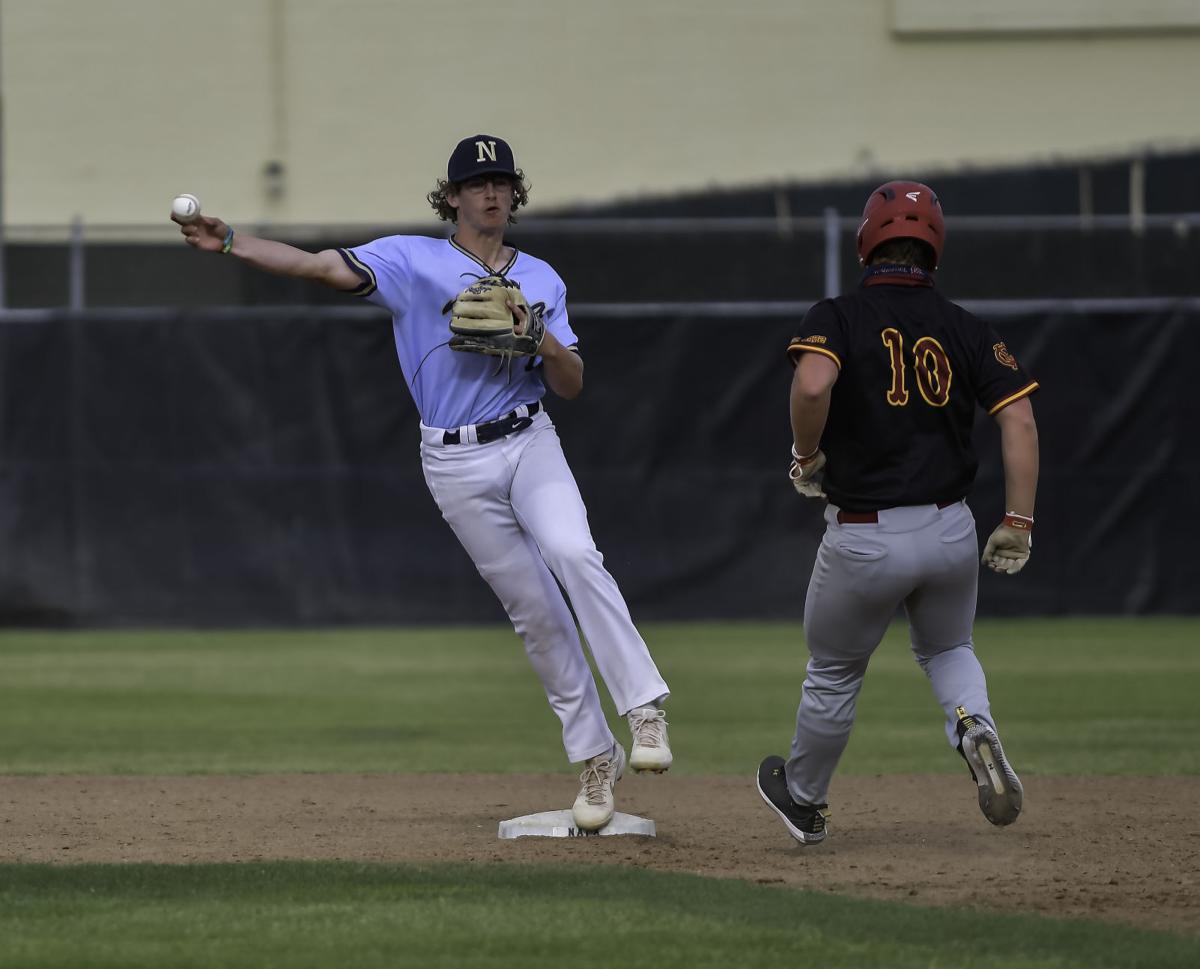 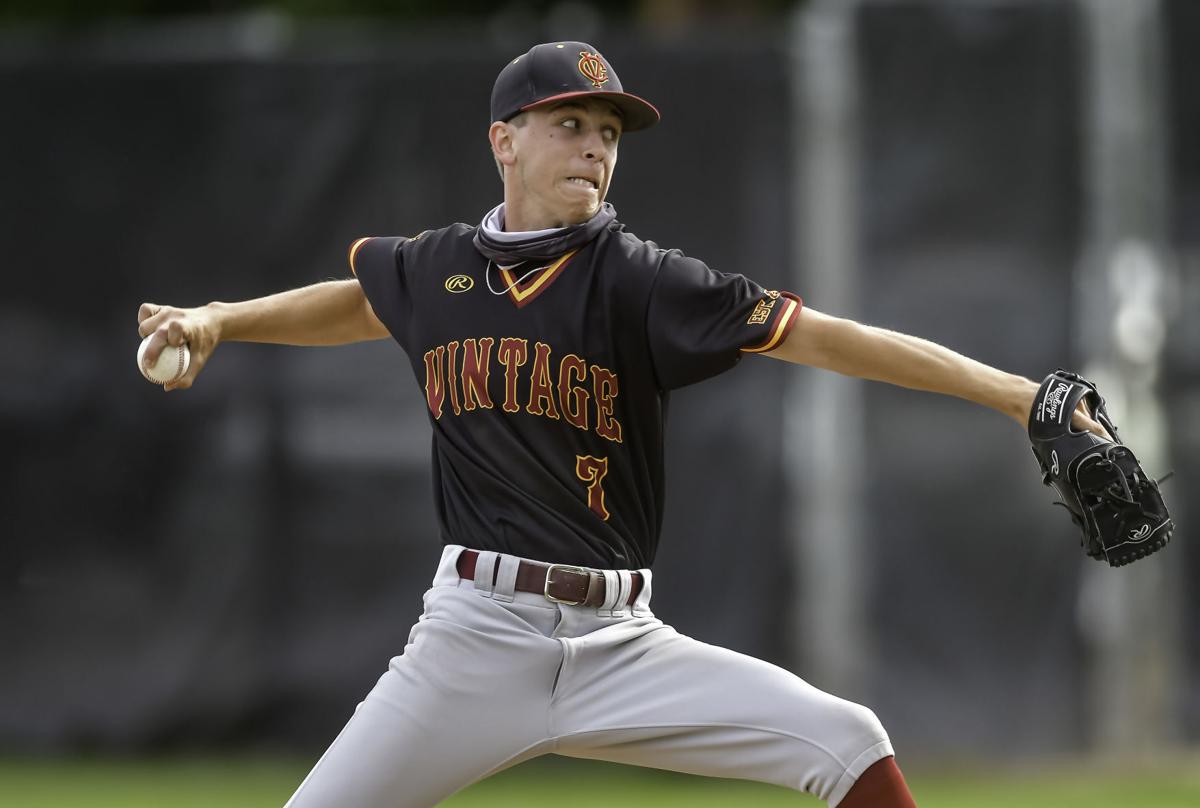 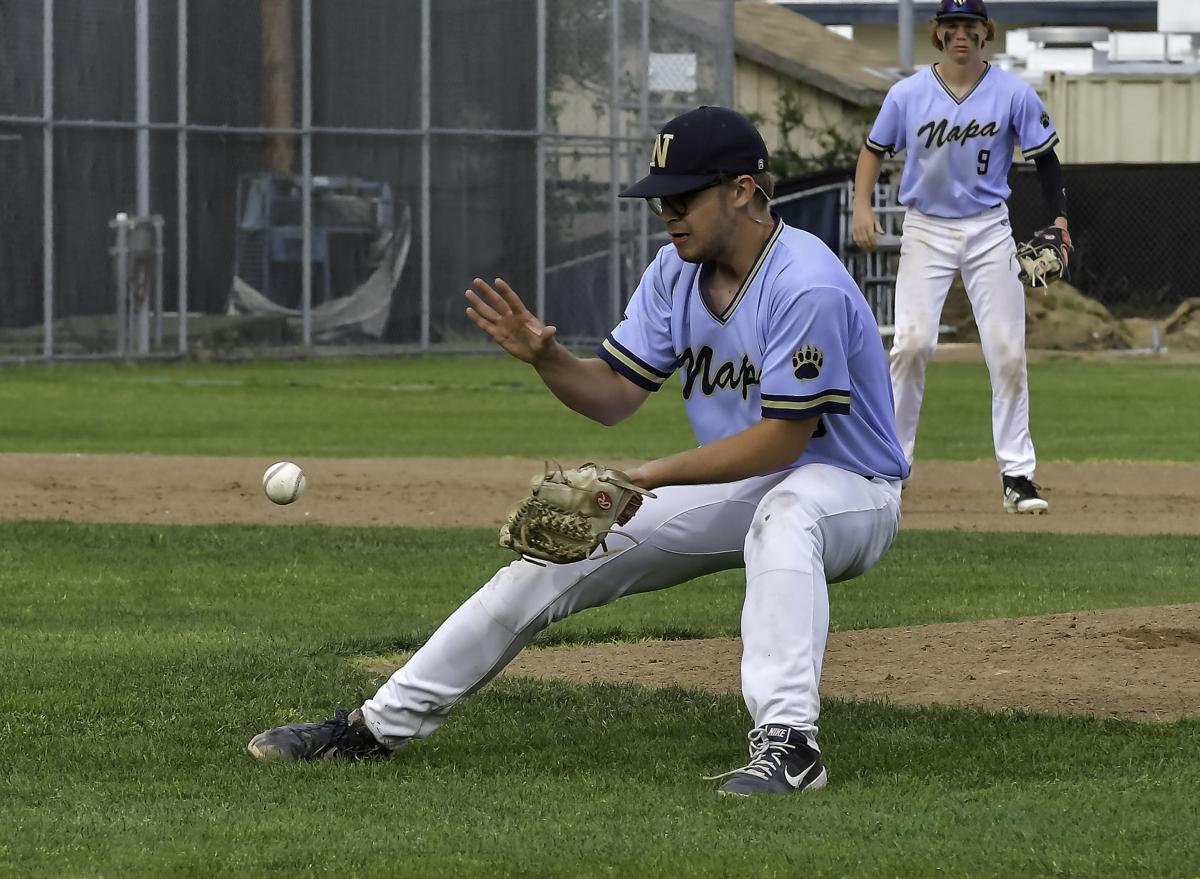 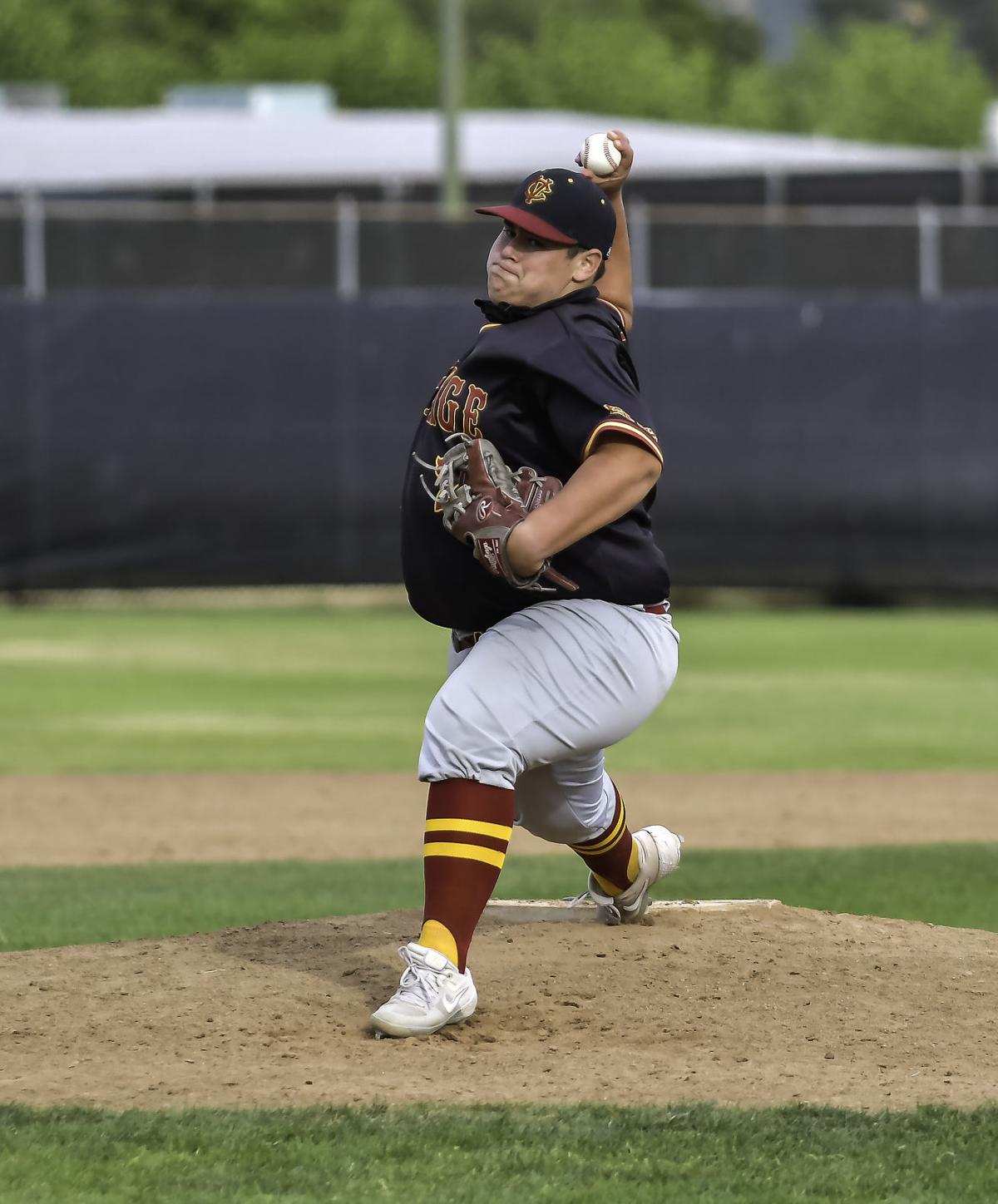 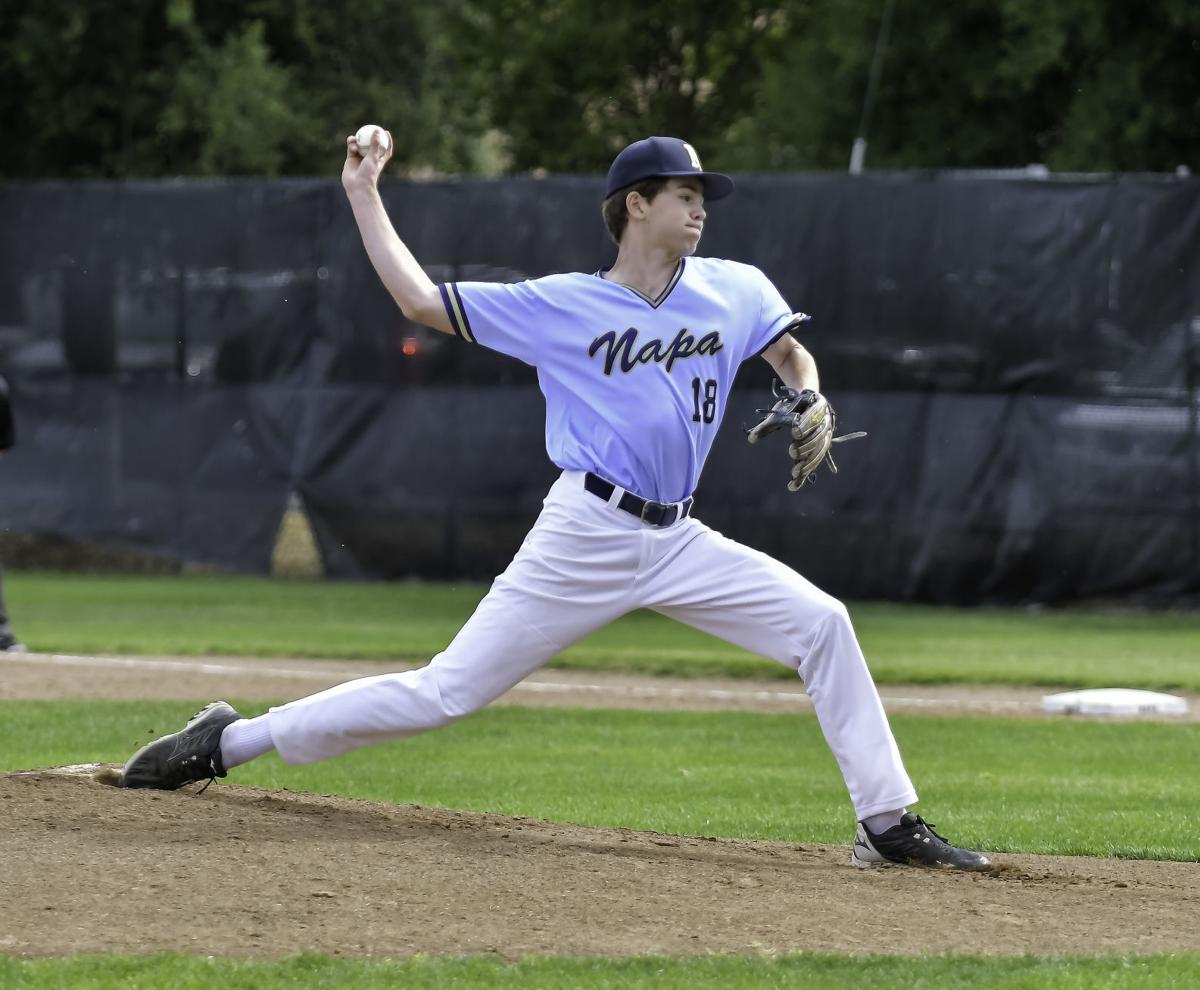 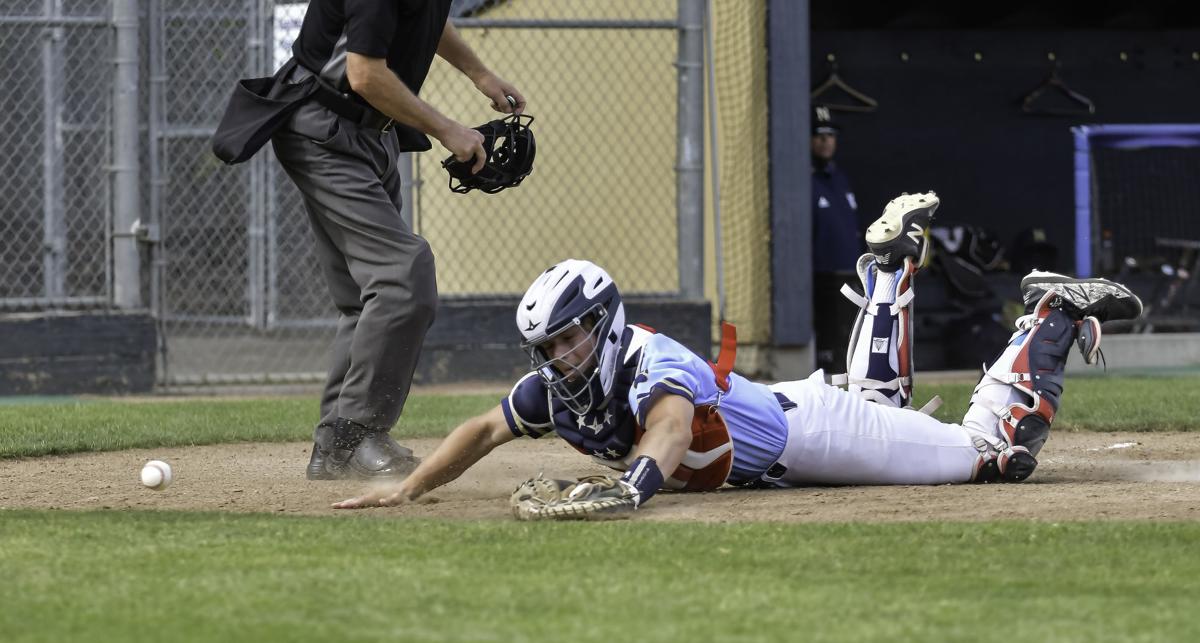 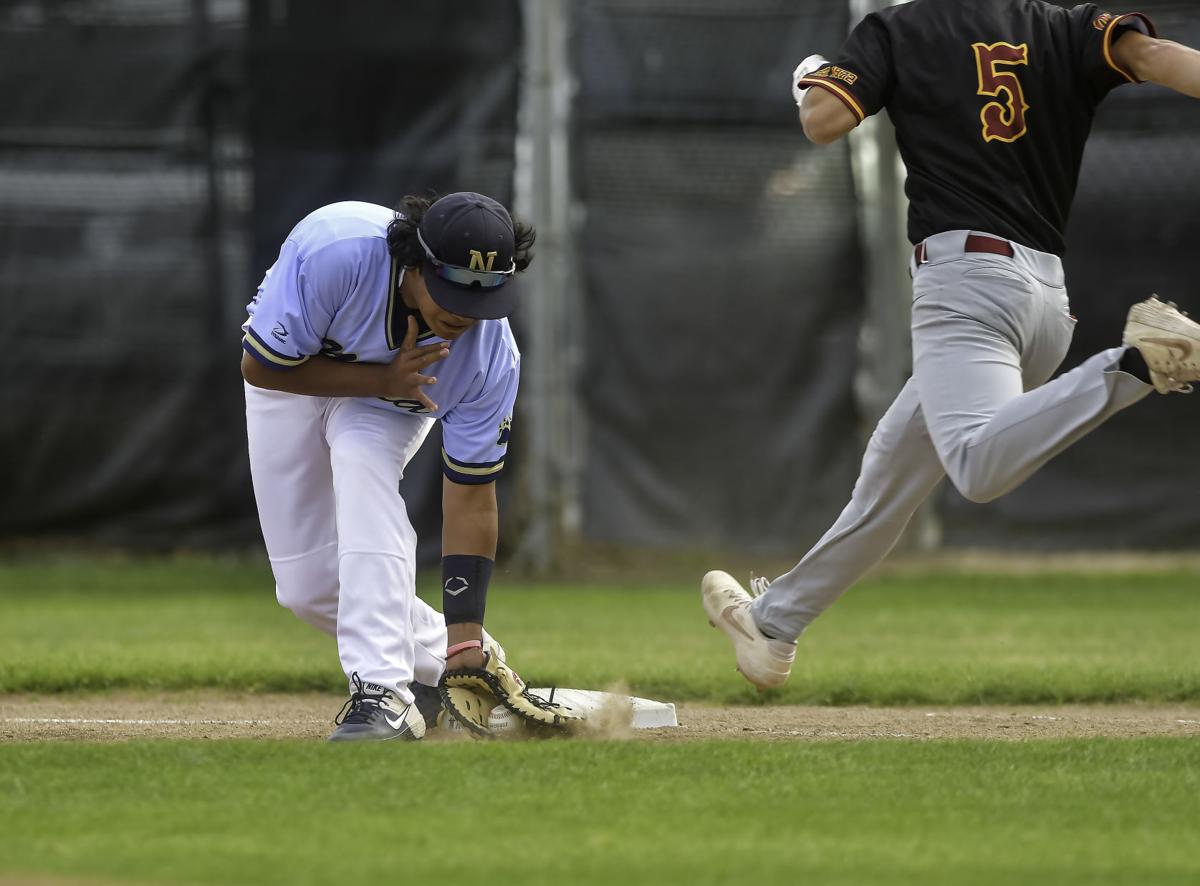 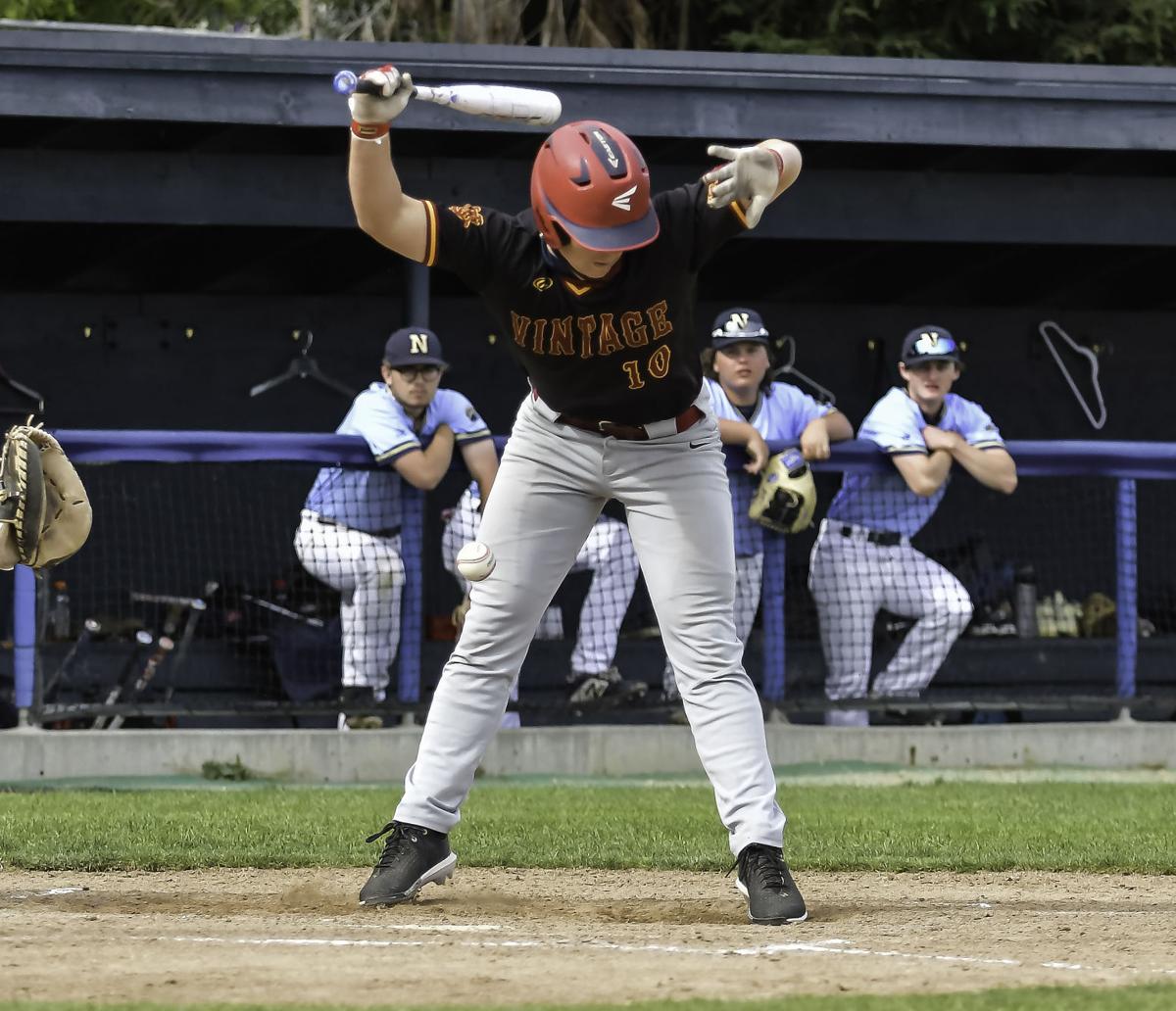 Vintage's Sam Gomez gets hit by a pitch at Napa High on Friday. 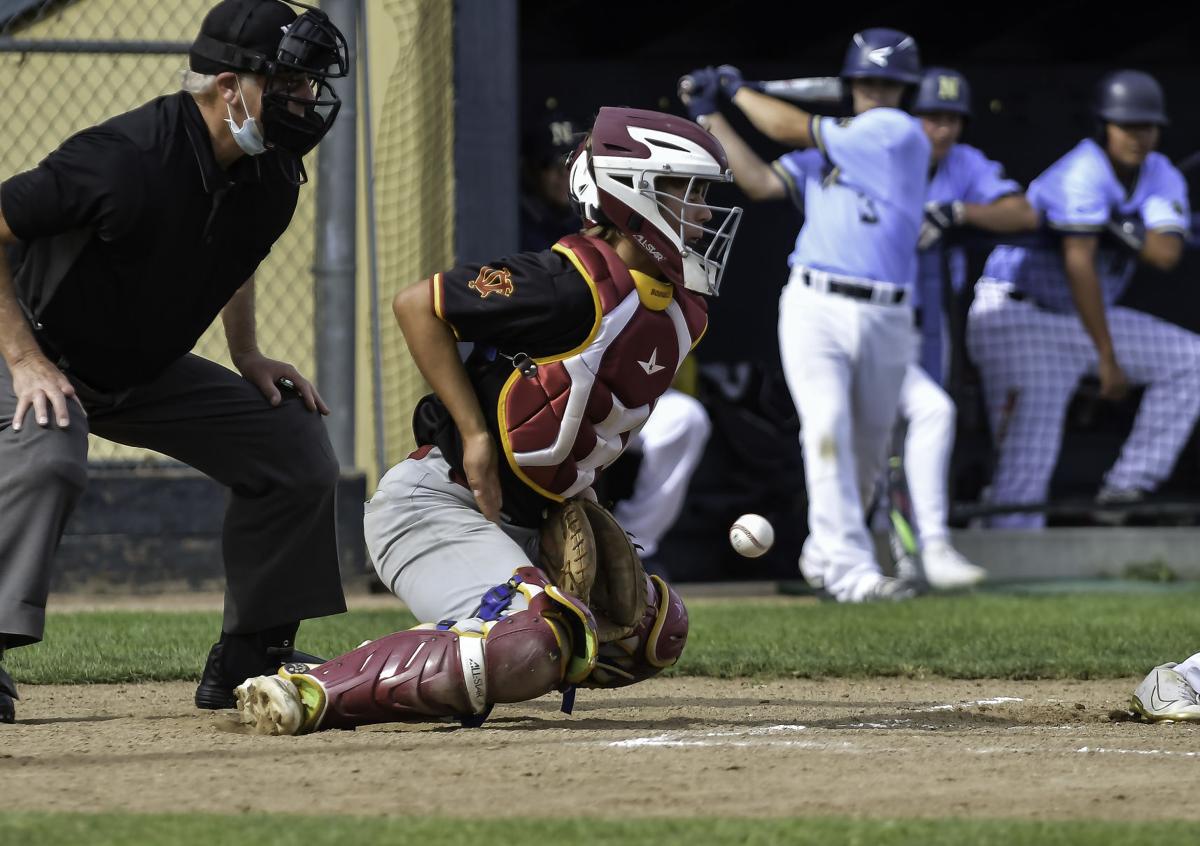 Vintage catcher Boden Cooke blocks a pitch in the first at Napa High on Friday. 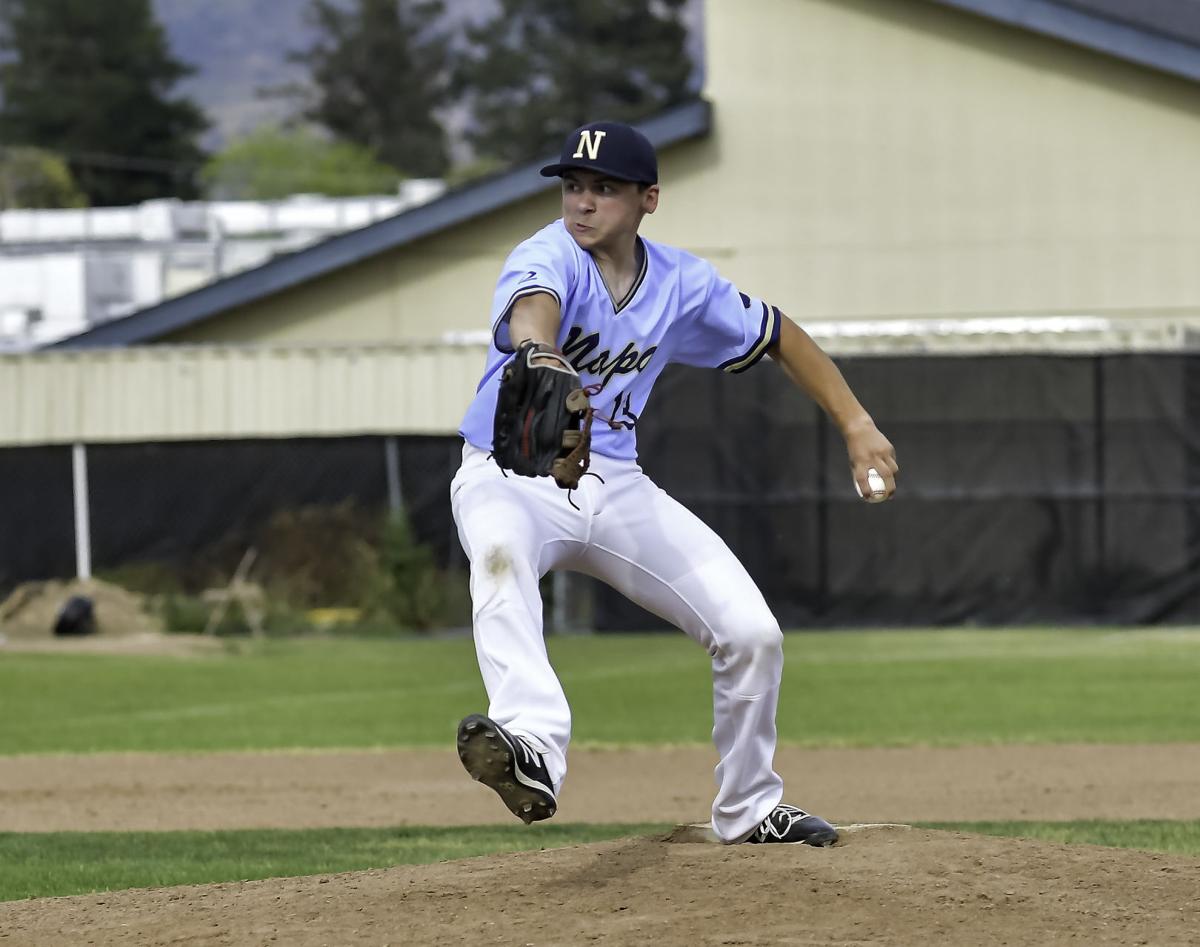 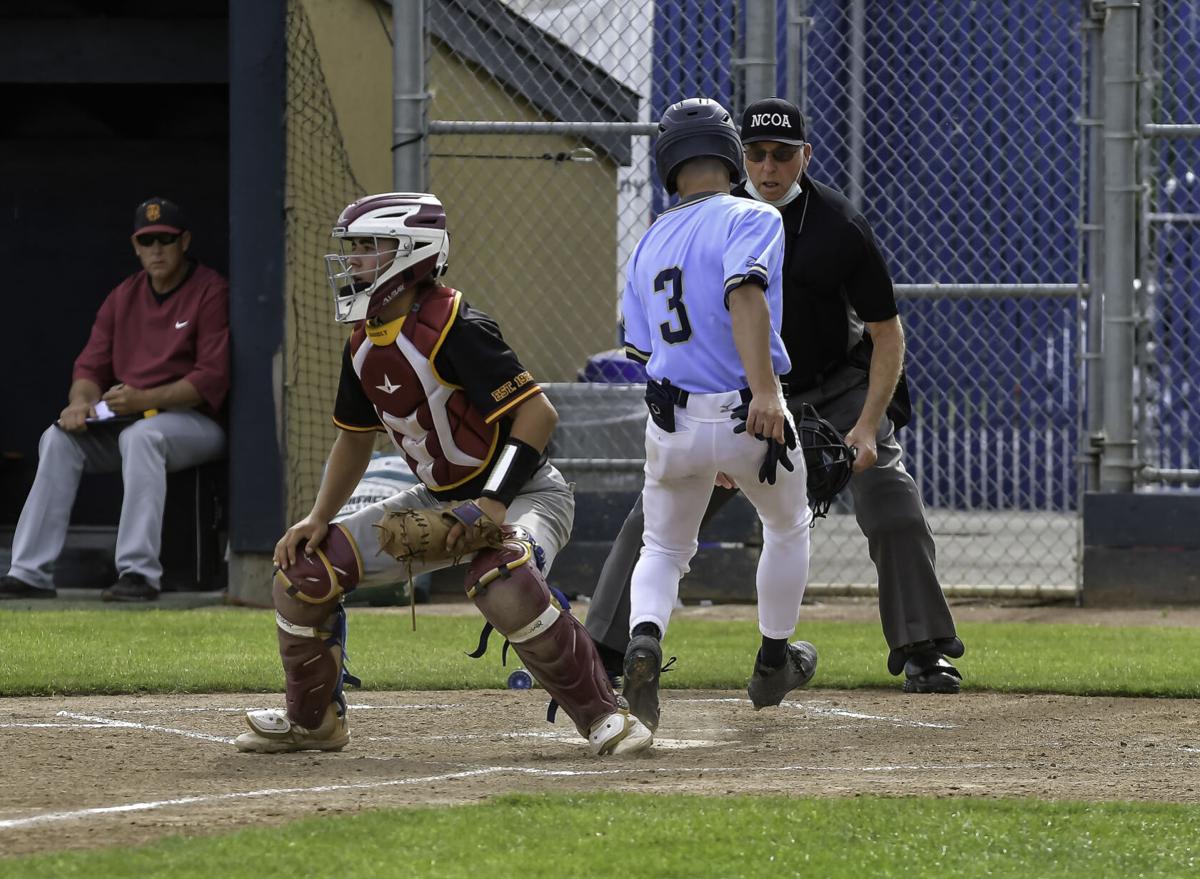 Something must have found its way into the ground water on the campus of Napa High School this week, as there was a major case of deja vu in the first baseball Big Game of the season Friday afternoon.

In the same vein as Big Game softball on Tuesday, the hosting Grizzlies took a one-run lead in the bottom of the first inning — only to have a backbreaking Vintage High rally just around the corner.

The Crushers, who had only four hits in the contest, scored six runs in the top of the third inning to pull away from Napa in a 9-1 Vine Valley Athletic League victory.

“They came out and their pitching and their play calling was good. They kept us off guard and we weren’t balanced up,” Vintage head coach Billy Smith said. “Then we’re just very fortunate they loaded the bases up for us. We took advantage of the situation that they gave us. It is a different ball game if we don’t get that situation.”

The game started out positive for the Grizzlies, as Noah Massey making waves in his first Big Game start on the mound. The sophomore’s first 11 pitches went for strikes as he retired the first six batters from Vintage (3-1, 3-0 VVAL).

Napa (1-4, 1-3 VVAL) gave Massey some run support in the bottom of the first, as Elliott Zuidema (1 for 4) opened with a single to centerfield. After a strikeout by Crushers starter Dylan Rody, Connor Ross (1 for 3) rocketed a line-drive single to right field. Lucas Brandon (2 for 3) then singled to center to drive in Zuidema from second base.

The Grizzlies might have had a large inning if not for a heads-up play by Vintage’s Nick Schuttish. Cameron Taylor (1 for 3) smacked a hard-hit ball at the third baseman. The senior fielded the ball and quickly tagged out Ross rushing towards third base and completed a double play with a throw to first to end the rally.

“First inning was rough a little bit and I gave up a few hits and the run, but I worked through it and my curveball was feeling really good today,” Rody said. “My defense behind me really helped me out and I’ve got to give props to those guys.”

The game turned in the third inning, as something wasn’t quite right with Massey and the Crushers took advantage. The young hurler, after being unhittable through two innings, started off the third by hitting two Vintage batters. After an error at third loaded the bases, the next batter flied out. But the Crushers stayed patient and waited to see if Massey could regain control of his mechanics. He didn’t, as Rody and Davide Migotto drew RBI walks to give Vintage a 2-1 lead.

After sacrifice fly by Ian Avalos scored Sam Neal from third, Sam Gomez was hit by a pitch to once again load the bases. Schuttish then cracked open the game with single to right-center that dropped in front of two Grizzlies who collided. All three base runners scored and Schuttish took second base on the throw home.

Aiden Chatham relieved Massey and induced the final out of the inning on a pop-up in the infield.

Napa head coach Jason Chatham said Massey was surprised that he was brought up to the varsity.

“He thought he was going to be on JV, but he fits exactly the type of system that we want,” the coach said. “He's got a loose arm and, generally speaking, very good mechanics. He's definitely a guy that pounds the zone. He can throw a changeup and curveball for a strike and those are the kinds of guys that I want, because we can mix pitches and keep people off balance.

“He lost something mechanically in the third. We tried to give him a little bit of room and space, because we have a game tomorrow and we had one on Tuesday, so we didn't want to go to the pen too early. He was so good in the first two innings that we wanted to see if he could find it, but he didn’t quite capture it again.”

Rody, meanwhile, found his groove and started to quickly mow through innings. After giving up three hits in the opening frame, the senior allowed only three hits in his remaining five innings, including a Dylan Snider single. Rody was pulled after the sixth and finished with eight strikeouts.

“That is our No. 1 and that is Dylan Rody and that’s why we give him the ball in all of the big games, not just this Big Game. He wants the ball every Friday,” Smith said. “It’s good to go out knowing that he’s gonna throw strikes and compete. He wanted to finish that game, but we didn’t need him to.”

Vintage extended its lead in the top of the fifth inning. Rody walked, Migotto singled up the middle, and Avalos launched a stand-up double that scored Rody from second. After a pop-up to Chatham, Schuttish sent the third pitch and first strike he saw into centerfield, scoring Avalos and Migotto for the 9-1 lead. Schuttish was 2 for 4 while knocking in a game-high four RBIs.

“We really wanted to be patient at the plate,” Rody said. “The games before this, we were really out in front and swinging out of our butts. We were trying to just get bat on the ball a bunch, but our approach today was sitting back and getting pitches, running up the pitch count and getting people on and working through that.”

Napa struggled to put runners in scoring position throughout the game, but not for a lack of contact. The Grizzlies had more hits than Vintage but, more often than not, a well-struck ball found a Crusher’s glove. Especially Gavin Rabanal, a senior who made spectacular play after play while combing centerfield.

“We put the ball in play and we put it right on guys’ gloves and that happens sometimes,” Coach Chatham said. “But to their credit, they had to make the plays and their guys did. At some point, the law of averages says those balls will start to drop and it goes your way. That’s what the baseball gods do. They allow you to have those moments after you’ve had times where you’ve had tough at-bats and where balls find gloves.”

The schedule doesn’t ease up for Vintage. The Crushers head over to Santa Rosa on Monday to take on Maria Carrillo (8-1), the one-time stomping grounds of 2019 No. 3 overall pick and current Chicago White Sox first baseman Andrew Vaughn.

Napa visits Bethel of Vallejo in a nonleague contest on Wednesday before hosting VVAL foe Sonoma Valley on Friday.

Vintage's Nick Schuttish gets one of his pair of two-RBI hits on Friday.

Vintage's Sam Gomez gets hit by a pitch at Napa High on Friday.

Vintage catcher Boden Cooke blocks a pitch in the first at Napa High on Friday.