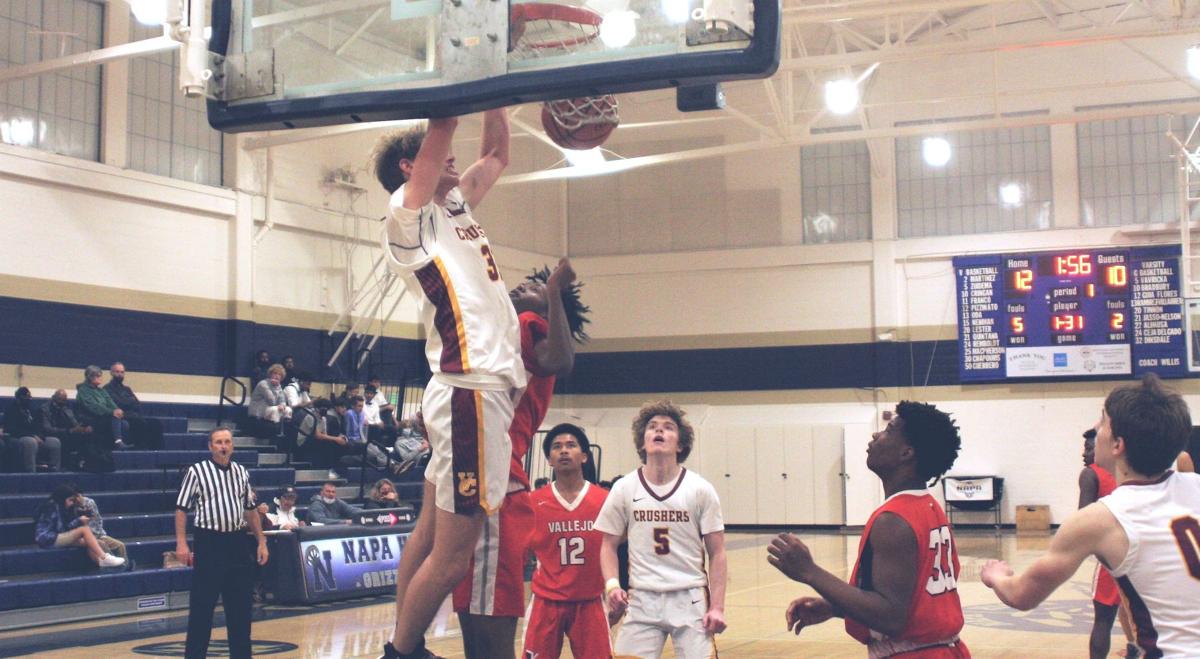 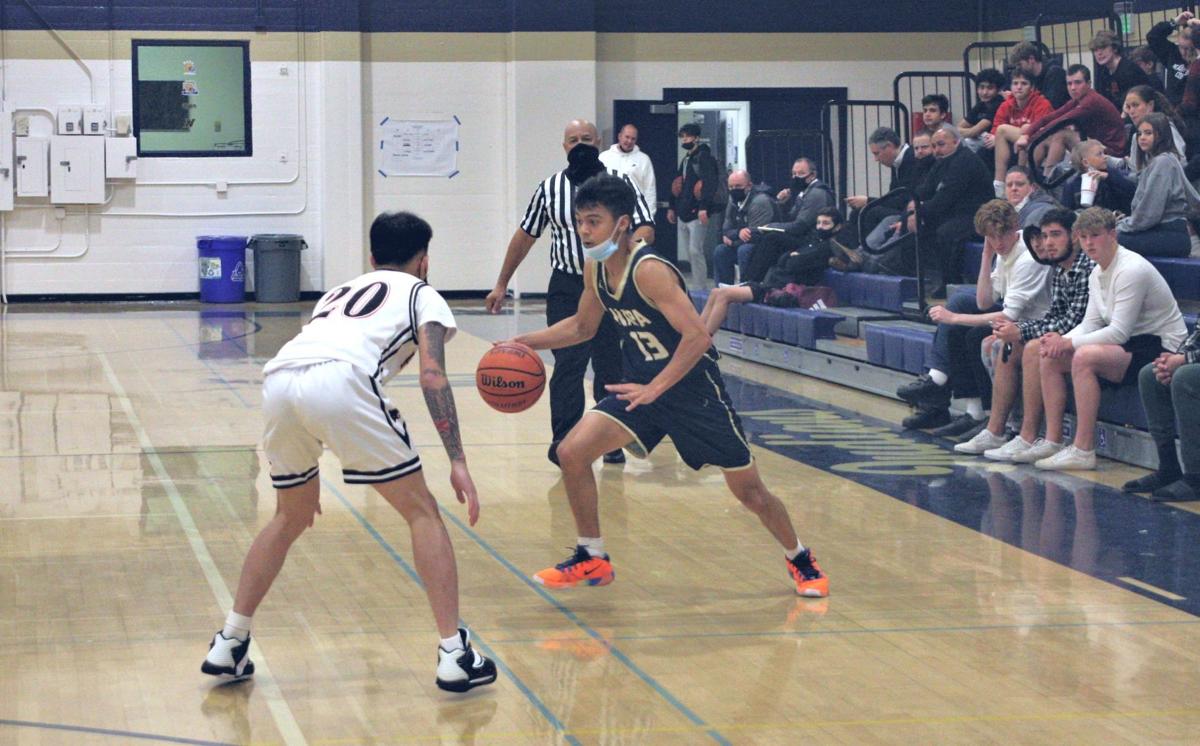 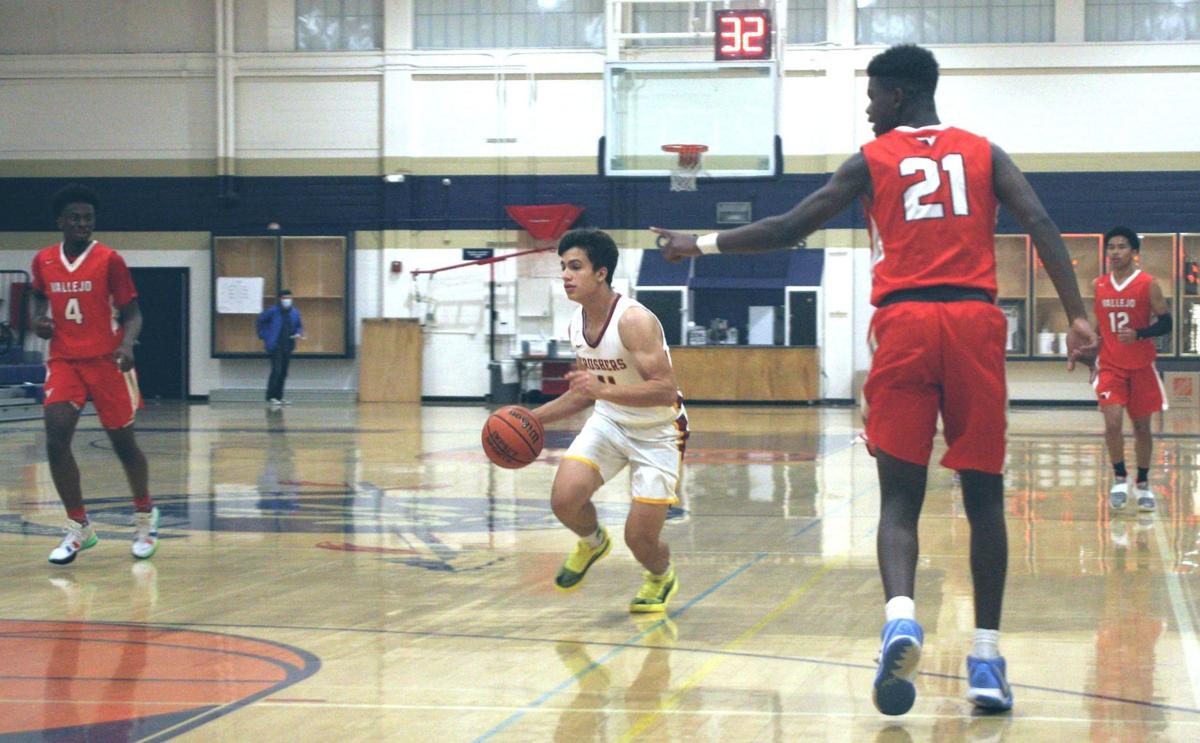 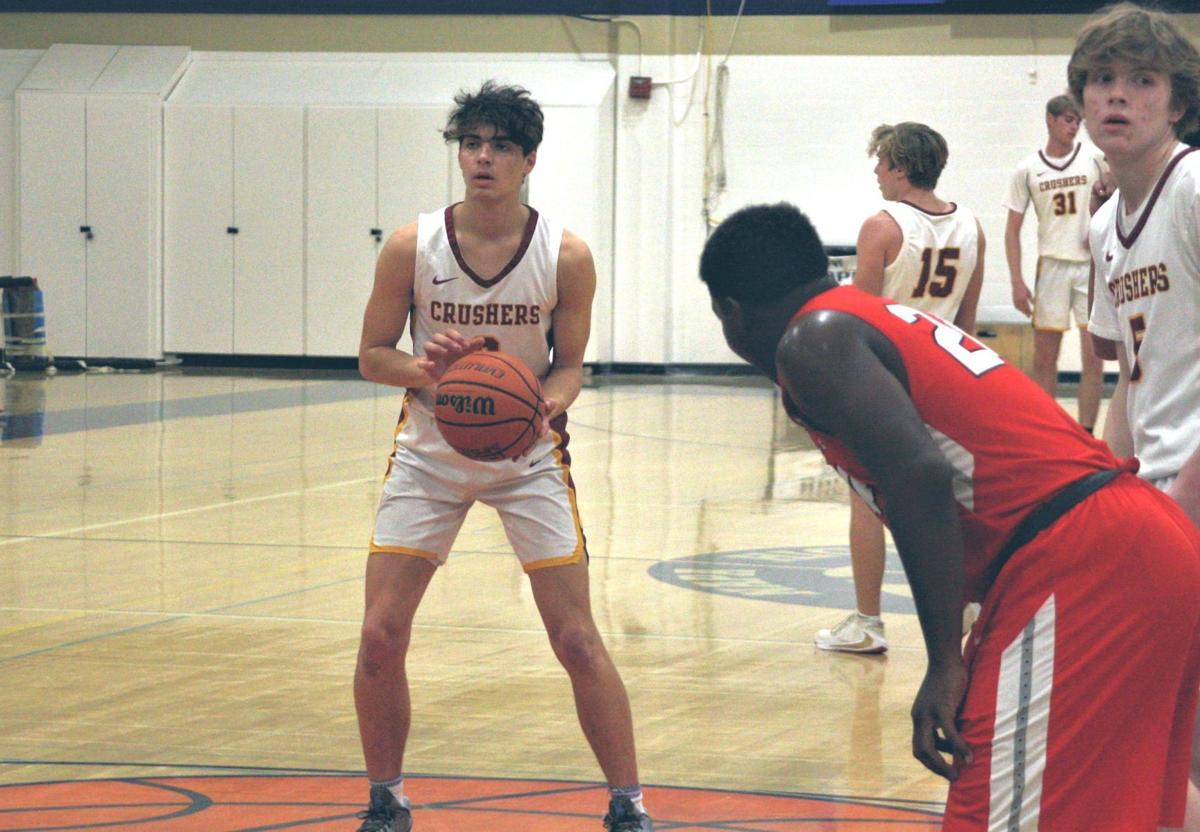 Vintage's Ben Jackson gets ready to shoot a free throw against Vallejo in their Wine Valley Tournament game Friday night at Messner Gym. 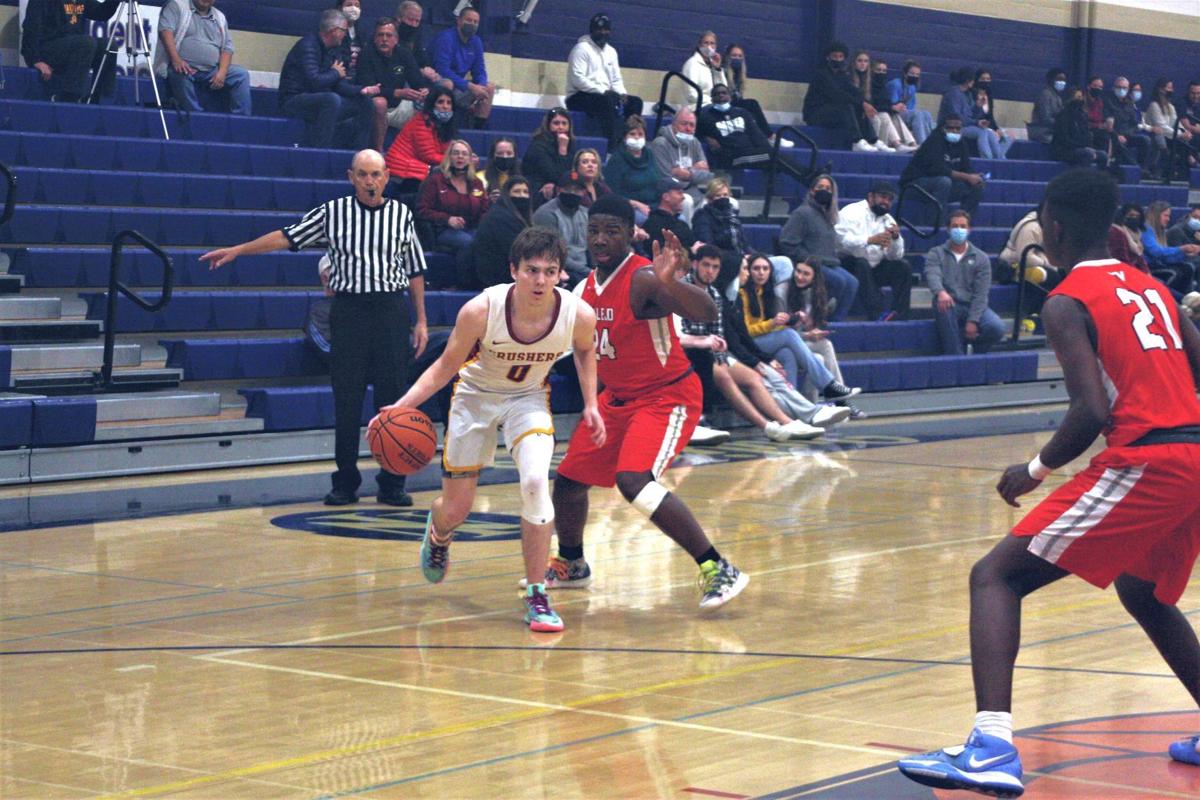 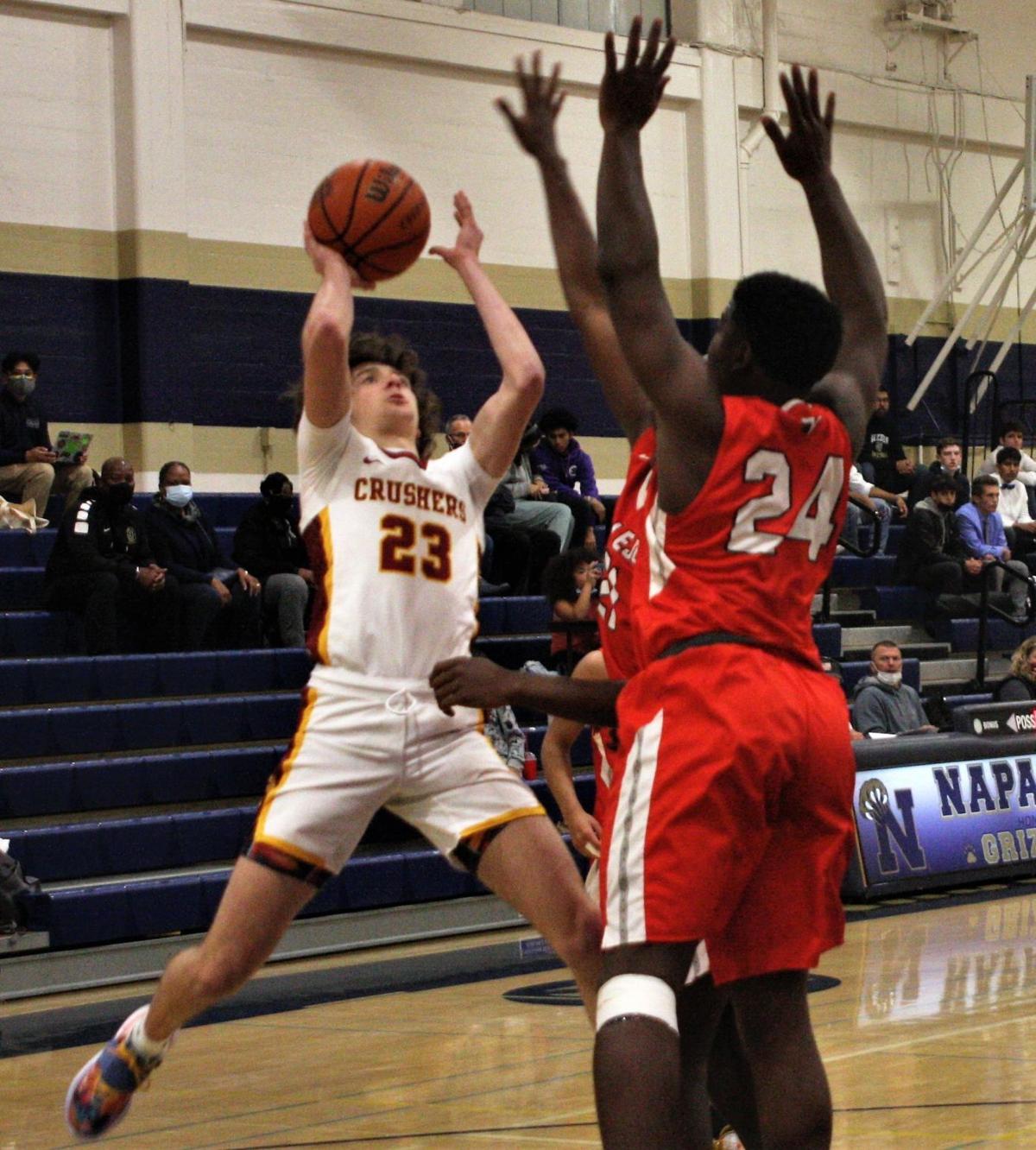 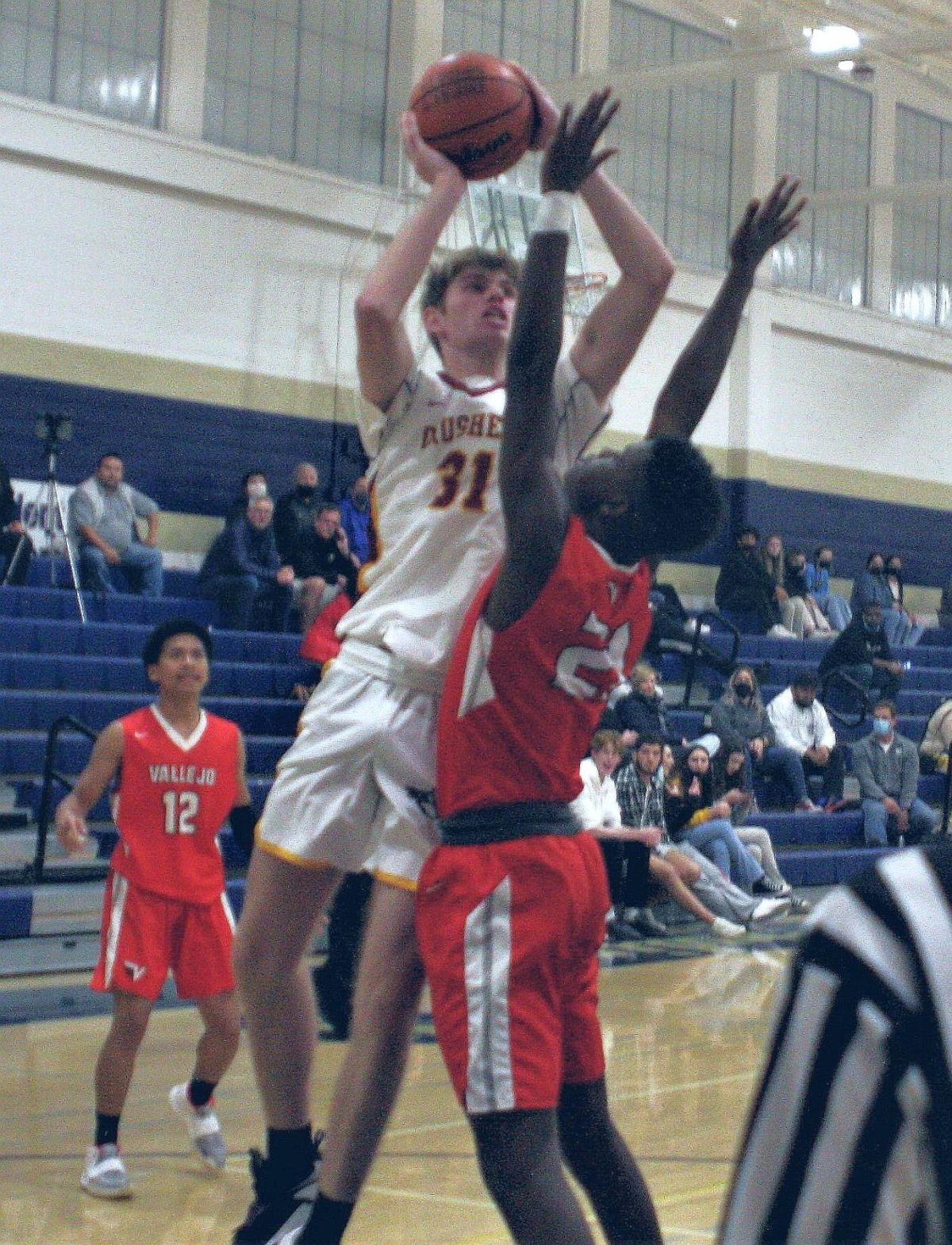 This early in the season, it’s unusual to get another shot at a team you’ve already seen.

It turned out rematches were on the menu for both the Vintage boys basketball team and host Napa High on Friday.

In the middle games on Day 2 of the Wine Valley Tournament at Napa High, Vintage beat Vallejo 57-46 less than two weeks after edging the Red Hawks by a point at home on a last-second layup, and Napa fell just 65-51 in a semifinal to a Santa Rosa High squad that had routed the Grizzlies by 32 points two weeks before in the same gym.

Vintage’s game was tight until the fourth quarter, when the Crushers (4-2) allowed Vallejo (1-3) to score just eight points.

The tournament, which wasn’t held last season because of COVID-19 concerns, has been a time to shine for Vintage center Cole Capitani. On Friday night, he tallied an impressive 27 points and 23 rebounds. The senior also went 3 for 4 from the free-throw line.

“I just feel like it was a really good game,” the 6-foot-7 Capitani said. “The matchups are there for me and the guards getting the ball into me throughout has really been helping the last couple of games.”

Capitani is one of seven seniors who were on JV coach Chuck Johnson’s 18-7 squad as sophomores.

“He’s continued to improve since the first time I met him,” Gongora said. “I've always wanted him to be more physical and more assertive. We really made a concerted effort to take advantage of a mismatch by throwing him a lot more high passes, a lot more lobs, and he's been improving. This is what we expected from him his senior year.”

Also pitching in were Jackson Corley with 12 points and eight rebounds, and Ben Jackson, who went 2 for 3 at the line and finished with 8 points.

The Crushers will meet Bethel for the consolation championship at 10:30 a.m. Saturday after Vallejo faces Rancho Cotate for the seventh place at 9 a.m.

Napa High (1-3) kept its rematch with Santa Rosa close until the fourth quarter, when the Grizzlies’ shots suddenly stopped falling.

“We continue going through our shots — (it’s) just the way of basketball sometimes,” Napa High head coach Joel Garcia explained. “The shots will tend to fall and tend to not, but I’m proud of the way the boys played today.”

Garcia has plenty of reason to be happy with what he saw from his team. After all, they have come a long way since losing 75-43 to the Panthers (5-0) on Nov. 18.

“I saw Napa High have a chip on their shoulder,” the coach said of his team. “They were willing to fight and we had three beautiful quarters, and then we let them slip away in the fourth quarter.”

Putting forth a marvelous performance once again for the Grizzlies was Dylan Newman. The 6-foot-5 senior scored 20 points, grabbed 8 rebounds and blocked 2 shots. He was also a perfect 4 for 4 from the free-throw line.

“He has a whole new mentality,” Garcia said of Newman. “He's driving, he's getting to the bucket, he’s getting boards, he's getting putbacks — it’s a beautiful thing to see.”

Nico Franco added 10 points to the cause and brought down 4 rebounds.

Napa High will follow Vintage on the court once again as it faces Windsor in the third-place game at noon Saturday. Santa Rosa will take on Archie Williams for the title at 1:30 p.m.

Vintage's Ben Jackson gets ready to shoot a free throw against Vallejo in their Wine Valley Tournament game Friday night at Messner Gym.