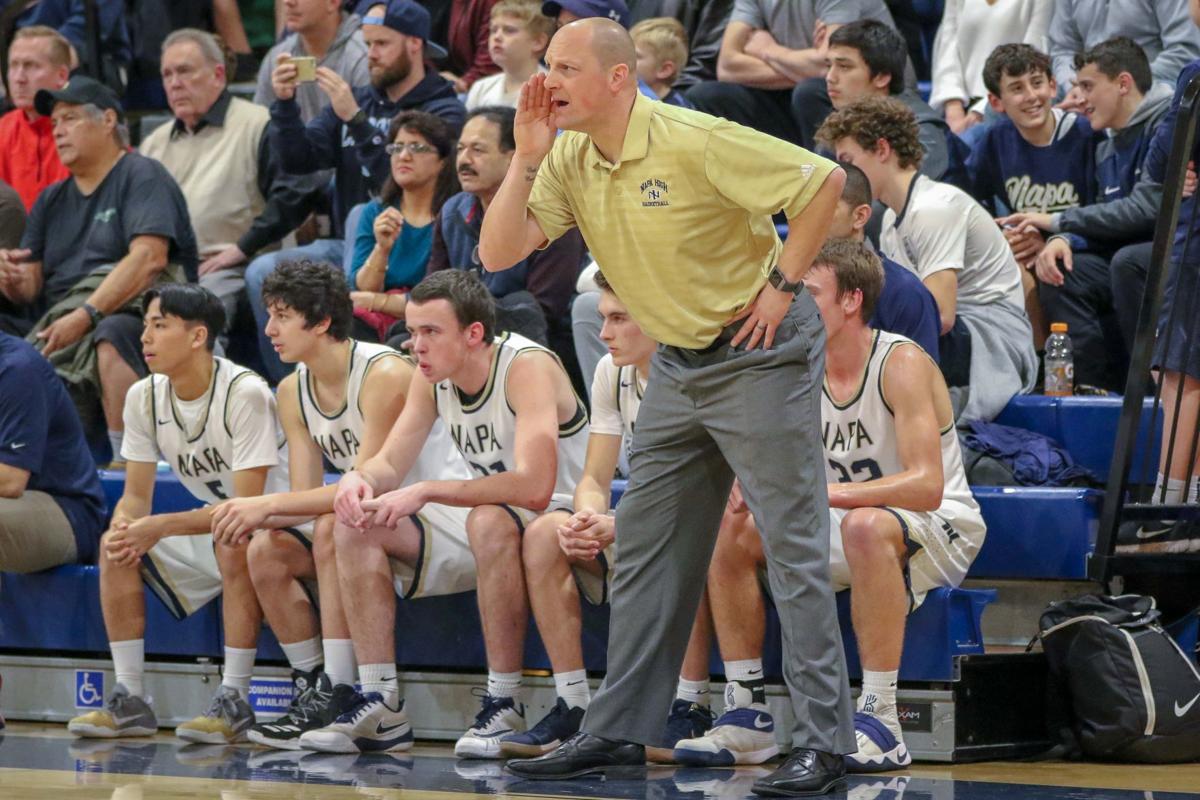 Napa High head coach Zack Cook yells to his players during a Big Game against Vintage in 2018 at Messner Gym. 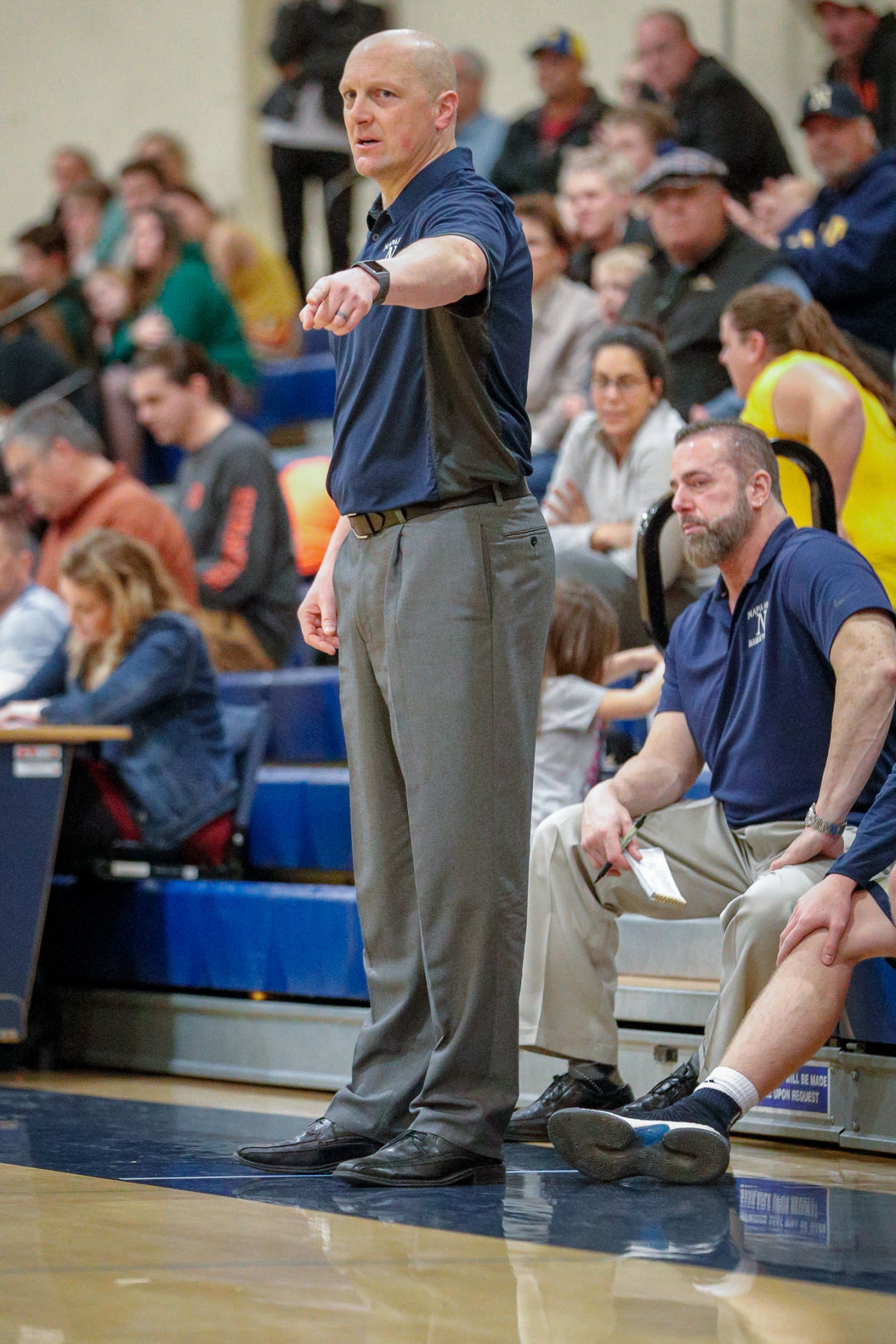 Napa High head coach Zack Cook gestures in front of assistant coach Greg Johnson during the third quarter of Napa's game against Sonoma Valley in January. Cook, the 2018-19 Napa Valley Register's County Coach of the Year for boys basketball, stepped down from his post on Monday after leading Napa for the past four seasons.

Even as the sports world remains on hold as the coronavirus pandemic drags into another week, high school coaching changes are afoot.

On Monday, Napa High entered the market for a new boys basketball head coach after Zack Cook stepped down from his position. He is currently in talks with Napa Valley College to join Paul DeBolt’s staff guiding the women’s basketball program.

Cook said the primary reason for his departure was to spend more time with his family. He and his wife, Jamie, have two young sons. Cade is 8 and Carson is 5.

“It was tough, especially to leave some of the seniors,” the 1996 Napa High graduate told The Register on Tuesday. “It’s always tough to move on from any high school coaching position because you build a strong bond with the players. But, like I said, it’s a lot of work and I look forward to being an assistant again and just having a little less on my plate and trying something new at the college.”

Cook led the program for the past four seasons, compiling an overall record of 50-59 and leading Napa to one playoff appearance. He guided the Grizzlies to a perfect 12-0 record in the Vine Valley Athletic League in the 2018-19 season, which landed them their first league title in 28 years. The Grizzlies went 23-6 overall that season and Cook was named the Napa Valley Register’s 2018-19 Napa County Coach of the Year for boys basketball.

“As a Napa High graduate and coach who has devoted years of service to the Napa High basketball program, Zack Cook’s leadership has been an incredible asset to the success of student athletes in the basketball program,” Napa High Principal Monica Ready told the Register via email on Wednesday. “He understands the importance of developing student athletes who demonstrate strong character, excel academically, and perform at high levels on the court. He serves as a role model for our athletes by demonstrating the key qualities we want Napa High student athletes to obtain and demonstrate on and off the court: trustworthiness, respect, responsibility, fairness, care and citizenship.

“Napa High School will miss his leadership on the basketball court.”

Napa High Athletic Director Darci Ward said on Tuesday that Cook had been weighing for some time whether or not to leave his post. Having been the Napa High varsity girls head coach from 2004-2019, Ward said the time commitment can be difficult when one is raising a family and teaching.

“While it definitely saddens us, especially me at Napa High School – I loved working with Zack in the coaching capacity – it’s the best thing right now for him to have more time with his family,” she said Tuesday. “Being a head coach takes a lot of time and energy and Zack has young kids, and spending more time at home with them is a big priority for him.”

Cook will bring his coaching prowess to a situation in need of some additional assistance. Napa Valley College’s women’s program has struggled to field teams the last several seasons. DeBolt, one of the winningest coaches in state history, was hired as head coach prior to the start of the 2019-20 season, which was cut short in December due to a lack of players. The Storm had played only eight games.

Cook’s hiring has yet to be approved by the NVC Board of Trustees and they next meet May 14, according to their 2020 meeting calendar.

“(Paul) has had a ton of success, coached for 30 years at Contra Costa,” Cook said. “So I’m excited to dig in with him and try to build up the women’s program out there at the college.”

Cook said he informed the Grizzlies’ returning varsity players of his departure in a Zoom video call on Monday. He told the Register he’ll retain his teaching position at Napa High and will also look to potentially teach a class or two or at NVC.

“I’m proud of the work we did,” he added. “I think I did a good job. My assistant coach, Greg Johnson, was amazing. The support we had from Darci and Annie Petrie and Monica was great. I’m proud of my four years there. I wish it could have been longer, but sometimes you’ve got to weigh your options and make decisions based on yourself and your family.”

Ward said she’s already begun searching for Cook’s replacement but added that the process is only just beginning. The school doesn’t have a “strict timeline at the moment.”

“We’ll move as quickly as we’re able to but we also want to make a really good choice, so that’ll take a little more time,” she said. “But we’re on the search.”

Napa High head coach Zack Cook yells to his players during a Big Game against Vintage in 2018 at Messner Gym.

Napa High head coach Zack Cook gestures in front of assistant coach Greg Johnson during the third quarter of Napa's game against Sonoma Valley in January. Cook, the 2018-19 Napa Valley Register's County Coach of the Year for boys basketball, stepped down from his post on Monday after leading Napa for the past four seasons.