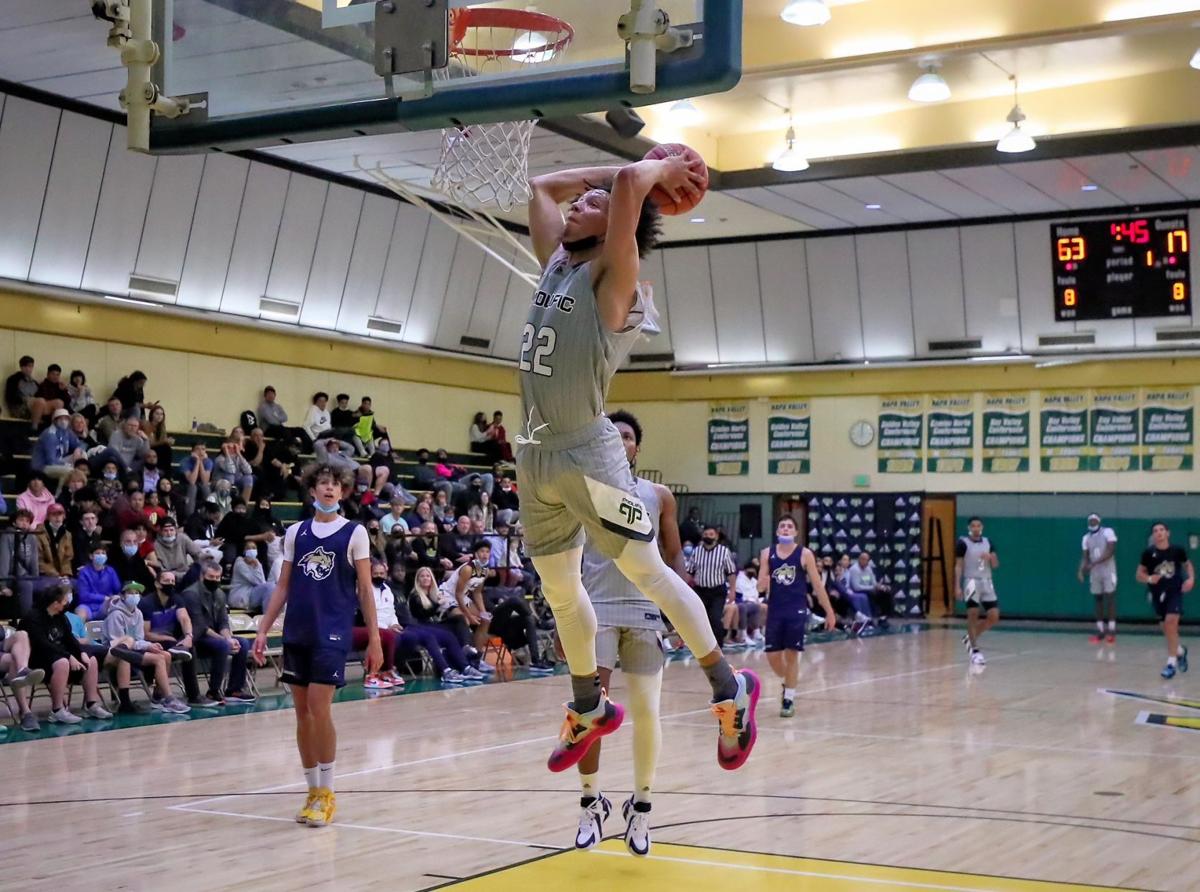 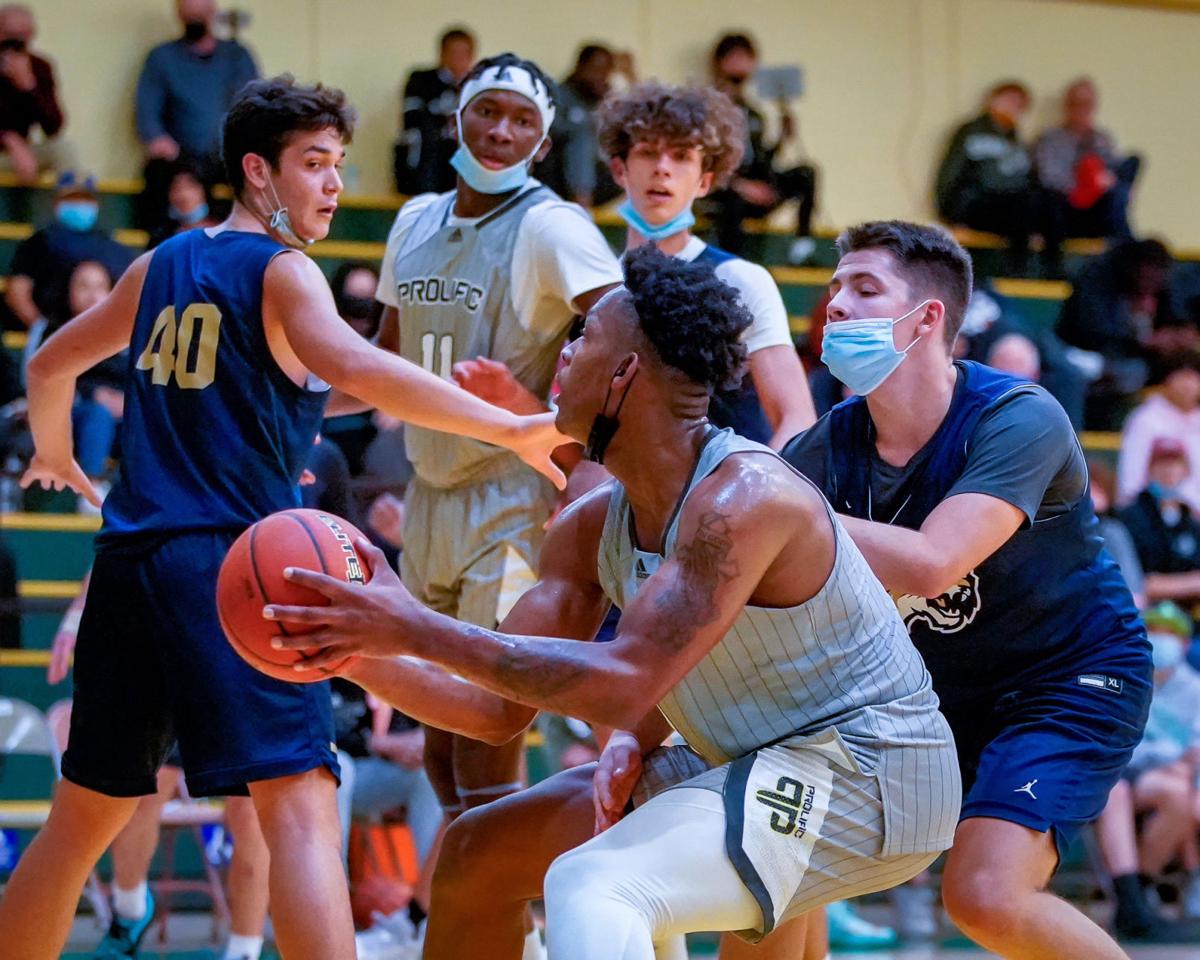 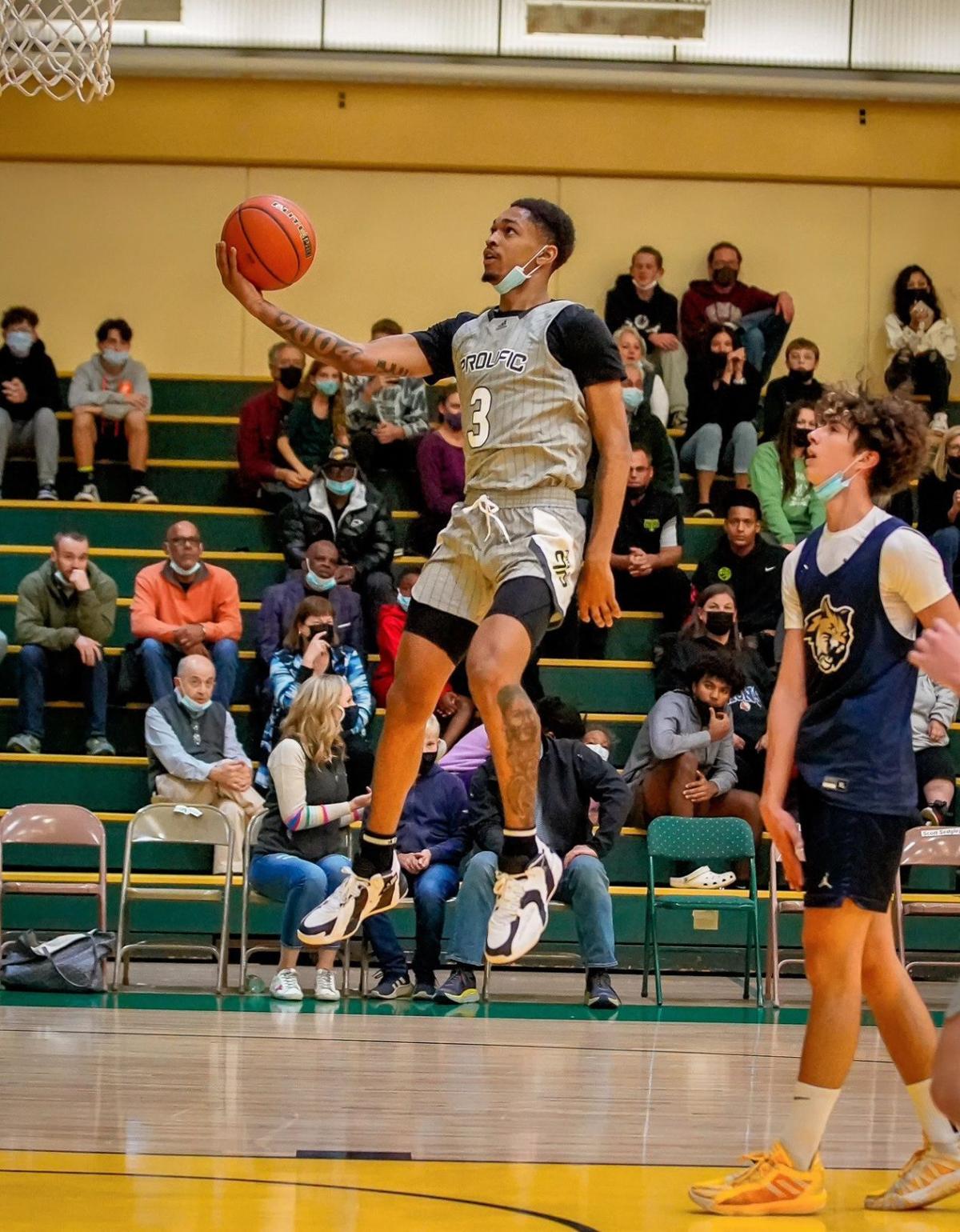 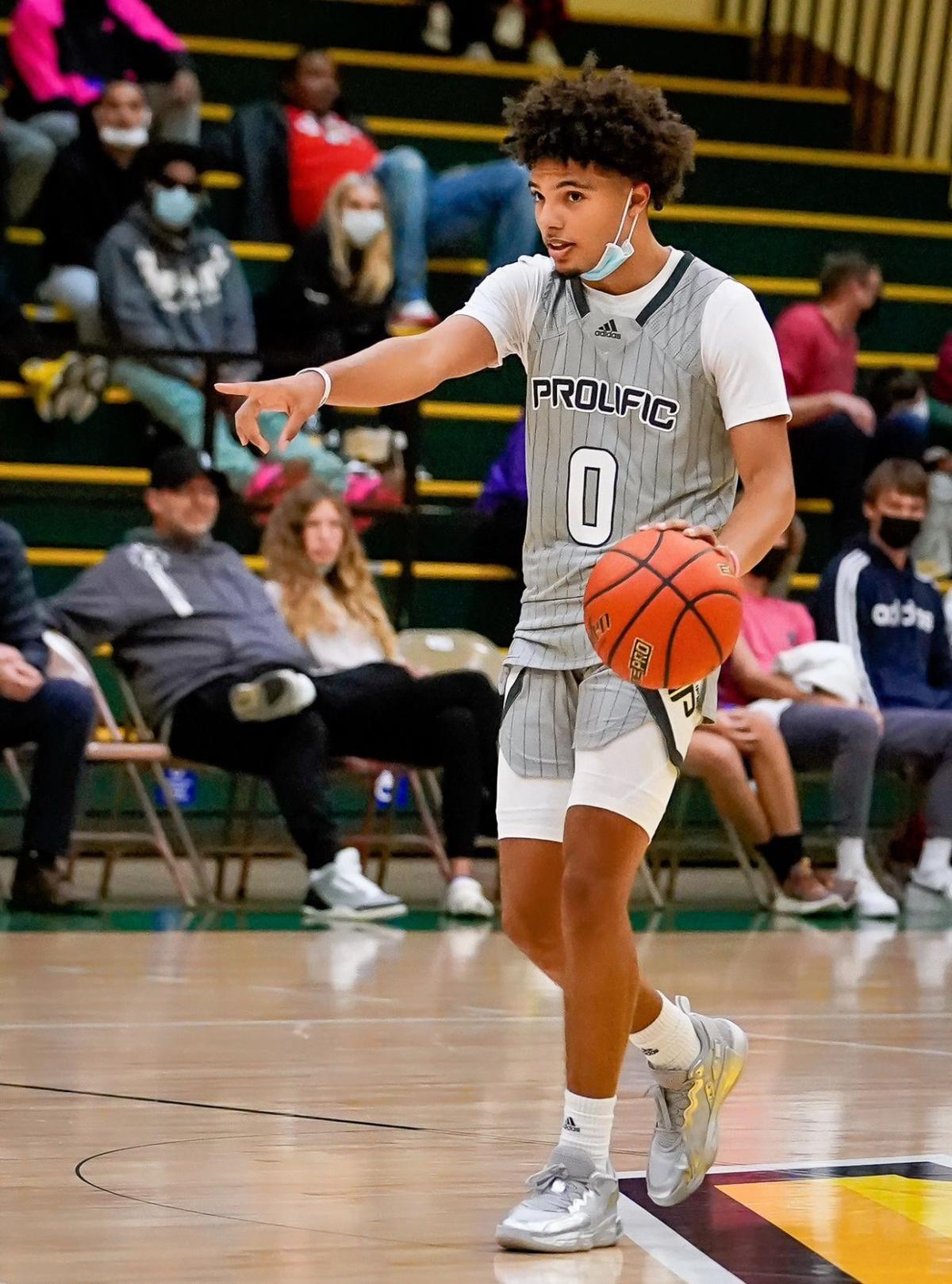 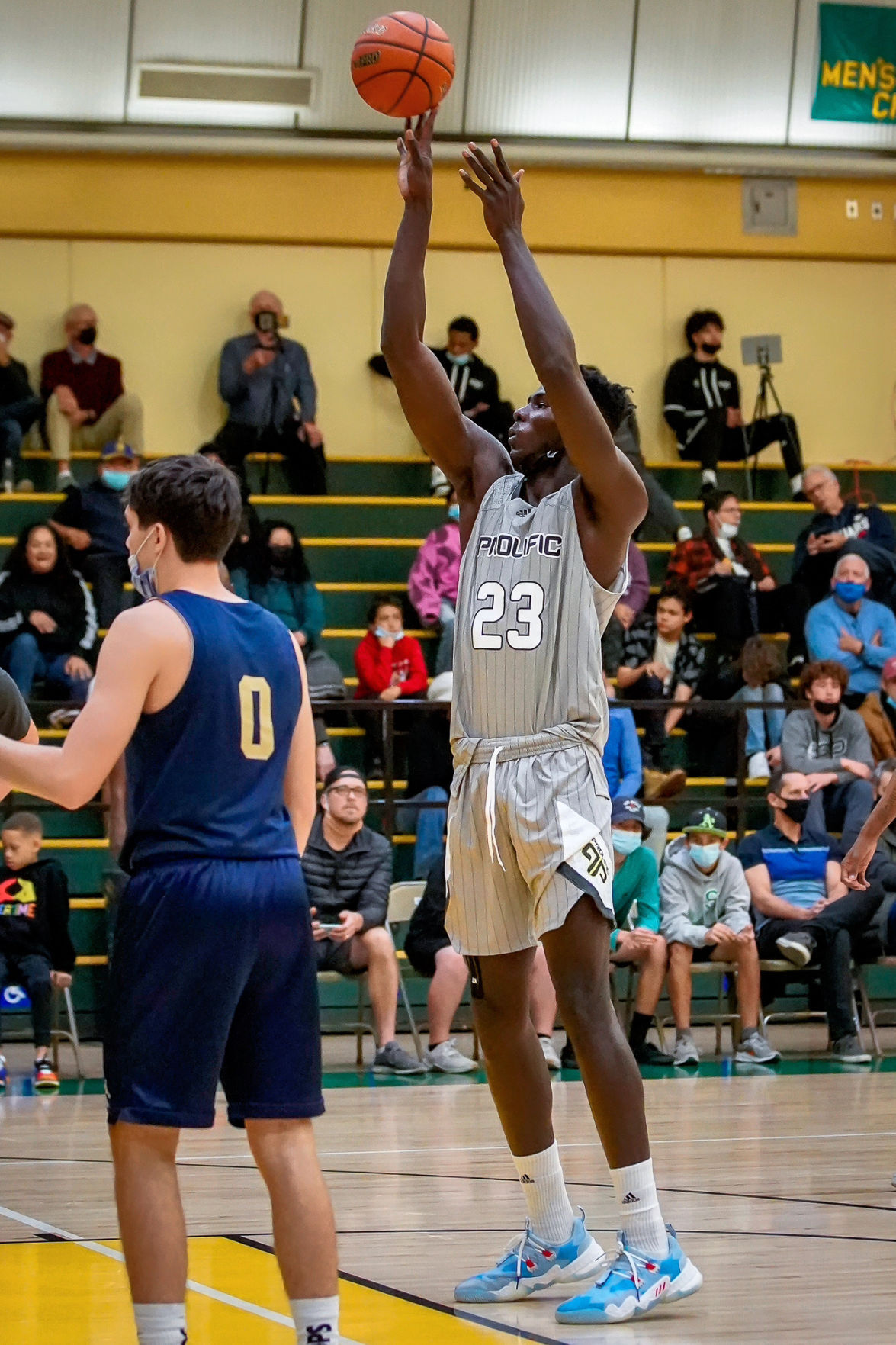 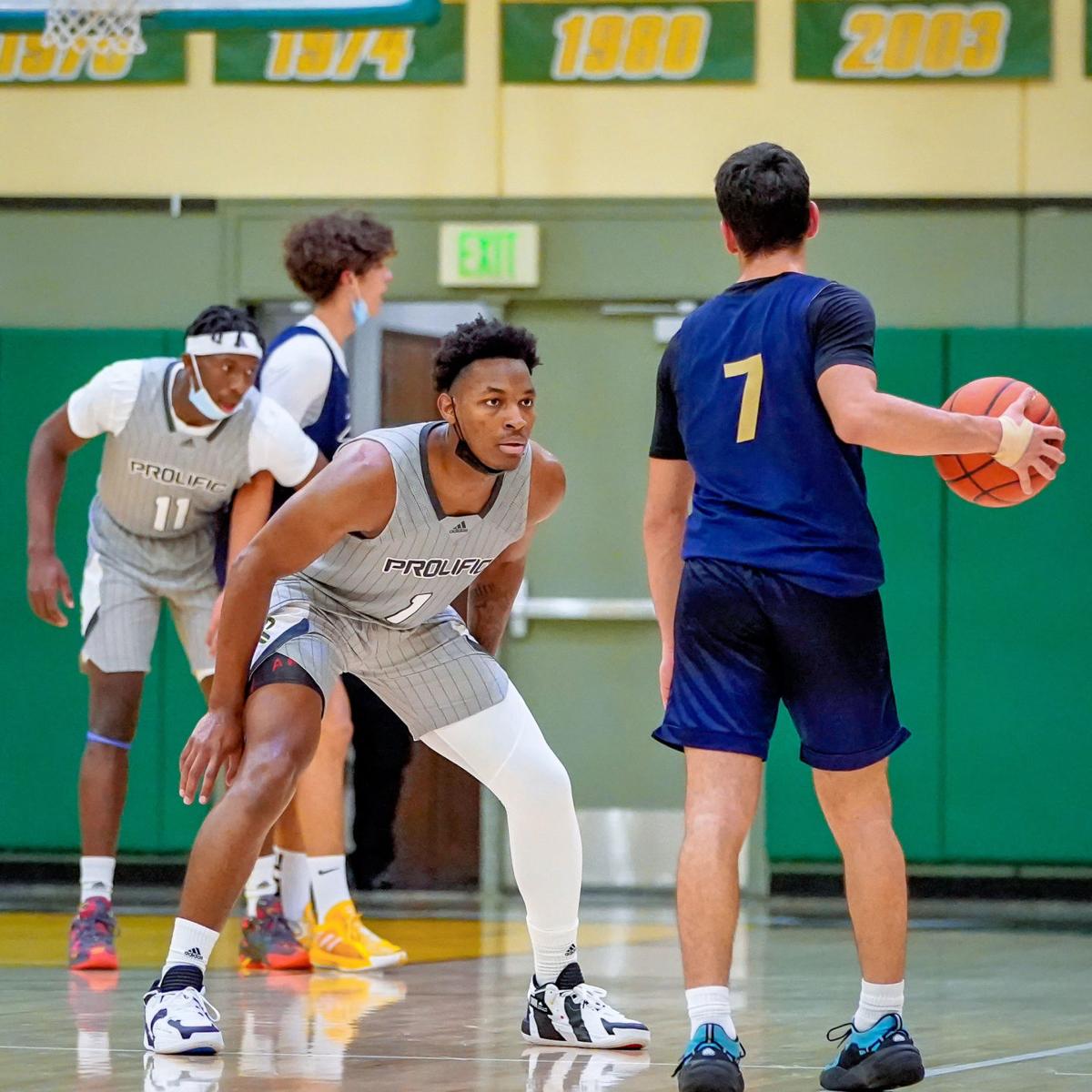 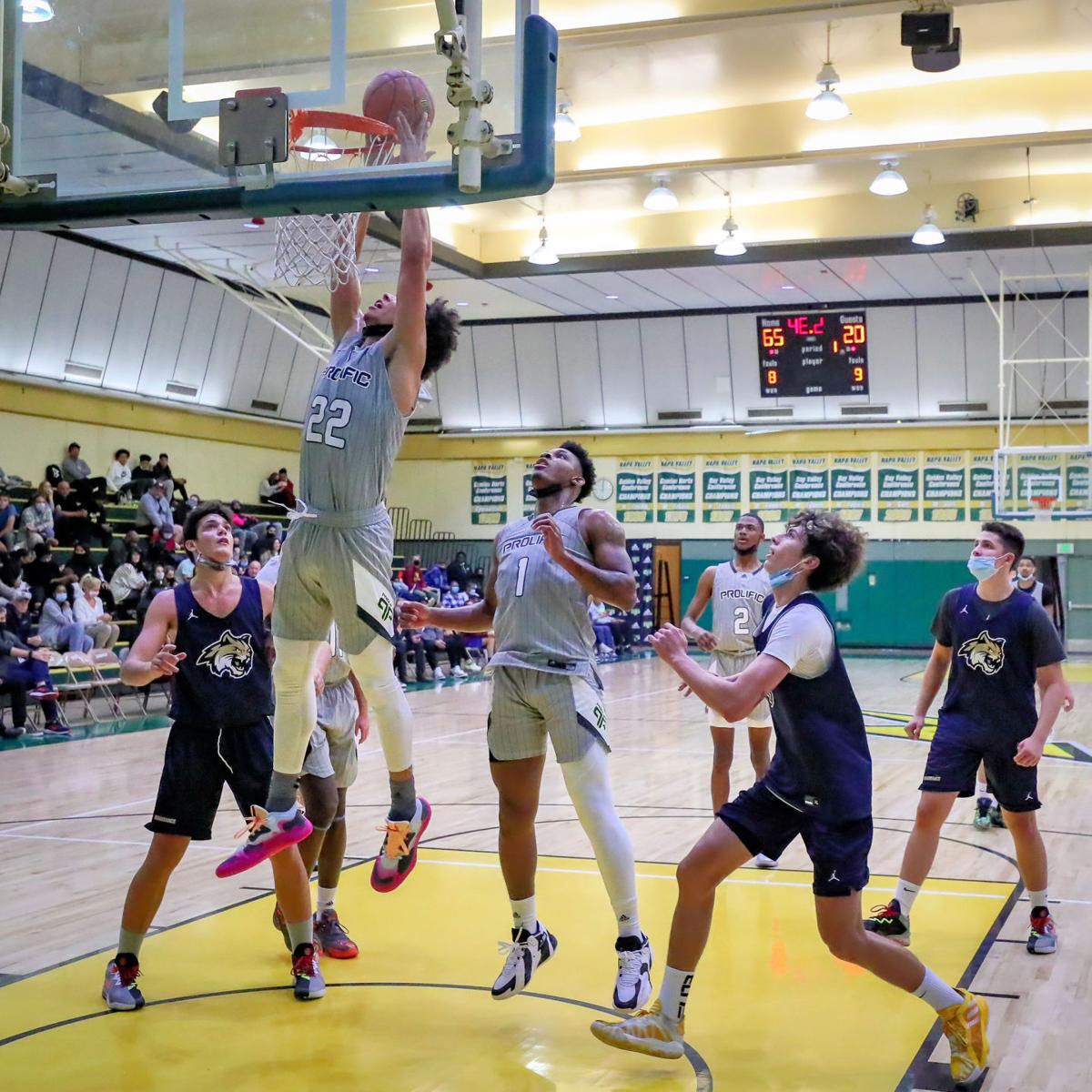 For Prolific Prep of Napa Christian, sometimes the hardest challenge is just playing against its own personnel at practice.

The star-studded boys basketball roster opened its regular season with back-to-back blowout victories this past weekend at Napa Valley College. The Crew defeated Renaissance Academy of Pasadena 132-52 on Saturday evening and ran past TMG Silver of Orange County 114-78 during Sunday afternoon’s action.

“The great thing is we’re just happy to be playing other teams and not ourselves every day in practice. We’re used to playing against really good players every day in practice and that’s the beauty of having this many good players on one team,” Prolific Prep head coach Billy McKnight said. “We’ve been working on some specific things and some of that stuff was coming out this weekend, which is good we’re sharing the ball.”

This past weekend showcased the deep talent on this season's Prolific Prep team before the Crew head out each weekend across the country for grueling Grind Session events. Prolific Prep was the main attraction between eight total games over two days, with each contest featuring one Prolific Prep-associated squad.

Sunday’s game against TMG gave the Crew the larger challenge between the two appearances, but Prolific Prep’s nearly-all-five-star starting lineup is a challenge for any team in the country. The Crew started three 2022 five-star prospects in MJ Rice, Dior Jackson and Adem Bona, while 2022 top 35 athlete and four-star Tre White is pushing close to five-star status. Rounding out the starting five was the lone non-senior in rising 2023 power forward N’Famara Dabo, who was recently offered by Kansas and Stanford.

The Prolific Prep offense has a smorgasbord of options when it comes to how to score, and first up from the buffet was a hearty slice of MJ Rice. The 6-foot-5 athletic wing already has the strength that most college players strive for and the senior used that to his advantage. Rice powered his way for easy looks and quickly filled up the scoring sheet, finishing with a team-high 19 points. Most of the starting lineup didn’t play for most of the second half.

Two members of the starting lineup made their college decisions this week and they both will be staying in California. Bona is a 6-foot-10 power forward who has been described by scouts as one of the fastest and most agile big men in this class. The senior, originally from Nigeria, committed to UCLA over Kentucky or the G League Ignite. The modern post player had highlight dunk after high-flying dunk over the weekend and finished with 14 points and seven rebounds against TMG.

“Playing against Adem each day is such an opportunity for me, because he is one of the top players in the county,” 7-foot senior Mor Seck said. “If I have to go up against him every day, it’s going to make me get better.”

Also committing this week for Prolific Prep was White, as the 6-foot-6 shooting guard selected USC as his future home. White is the third Pac-12 commit this season for Prolific Prep, as top point guard in the country Dior Johnson selected Oregon early this year.

White has thrived for the Crew so far this season, as the senior was freely able to outrun opponents on fast breaks for highlight dunks. White had a breakaway windmill dunk in each game, each one in the conversation for top plays from the weekend. The shooting guard finished with 12 points while grabbing five rebounds and dishing out four assists in the victory.

On most high school teams, Jordan Pope would be a star feature in the starting lineup. Prolific Prep has the luxury of having the senior three-star prospect coming off the bench as the sixth man. Pope finished with 13 points while dishing out six assists and snagging two rebounds on Sunday.

A player who will contribute big this year and likely be a menace next season is sophomore Dink Pate. The transfer from the Dallas, Texas area is regarded as one of the top 30 players in the 2024 class. The 6-6 shooting guard’s body type is reminiscent of Josh Jackson’s when the Michigan native first arrived in Napa over eight years ago. Pate has a quick first step and bounce to match and had 16 points on Saturday evening. The youngster has been accepted by the senior leadership for the Crew.

“MJ has really brought me under his wing. When I first came here, he made me part of his family,” Pate said. “He wants me to go against him and Dior during practice so we all sharpen each other. He has given me the green light during the games to shoot my shots. We are a brotherhood out there.”

As a group the Crew were unselfish with the basketball, as Prolific Prep had 33 total assists for the game. This unselfish tendency also showed itself on defense, as players were diving for loose balls even while up nearly 40 points on Saturday.

“The things we’re trying to execute we’re about to execute for the most part. We just have a lot of talent and everybody was able to get in there and contribute. Proud of them for getting better and they have gotten a lot better over the last few months.”

Another key weapon for Prolific Prep was Seck off the bench. The Archbishop Riordan of San Francisco transfer is the tallest member of the Crew at 7 feet. The senior used his height to be a presence in the paint, as tallying 14 points and a team-high 12 rebounds on Sunday. Seck had 18 points against Renaissance Academy.

“I have certain expectations of the older guys on the team and not just for the starters. We have got guys who normally would be starting on any other high school team in the county,” McKnight said. “Like Jordan, I am bringing him off the bench like our sixth man right now because he can score so well and he can give us a scoring boost when he gets into the game.

“Guys that came in and did really well for us were Mor Seck and Dink Pate and Dink is only a sophomore. Mor showed me a few things this weekend that I really liked. I know the older guys are going to play well. It's just about everyone developing that unselfish mentality and playing defense every time. It’s nice to see some of these guys come in and make really positive contributions.”

The Crew will head out onto the road until they’re back in California in early December to play at the NBA G-League Ignite fieldhouse in Walnut Creek for a showcase event. Prolific Prep will take on Edge School (Canada) and Colorado Prep (Denver) at the Latitude Longitude Classic in Arizona this weekend.

“We love playing in front of these fans here in Napa because they love to see us play and Prolific plays at the next level,” Seck said. “We have a really good team and wherever we’re going to go, we’re going to dominate. We have so many top players in the country and playing each other in practice is going to make this easier for us.”