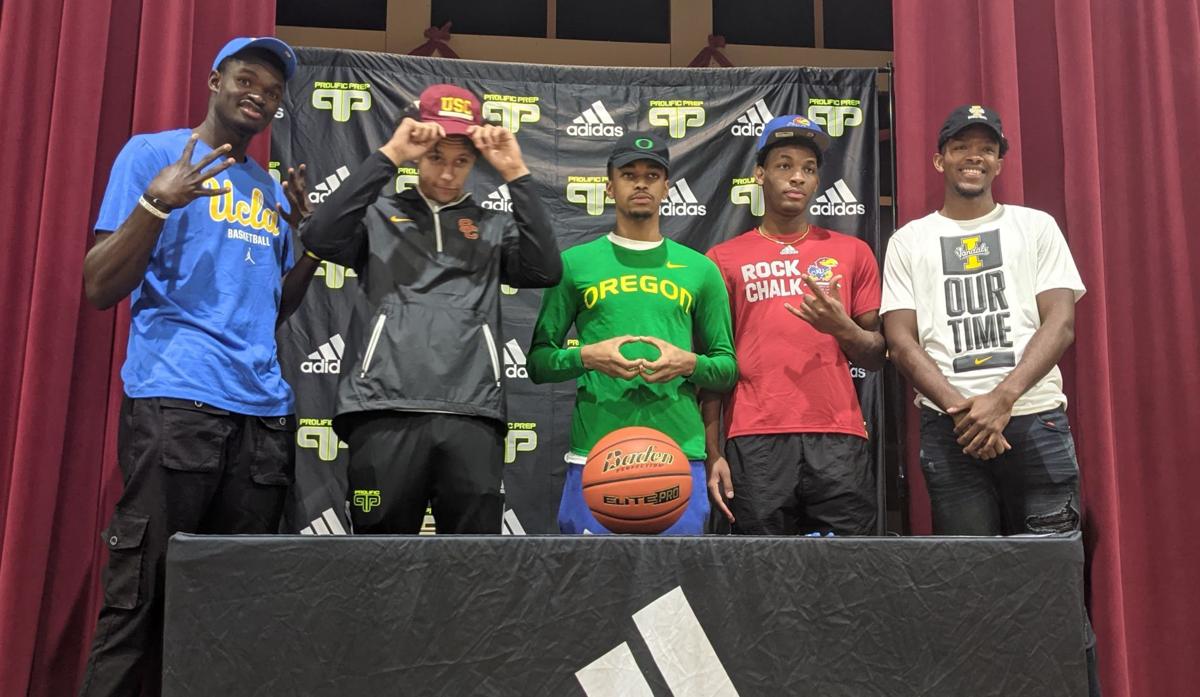 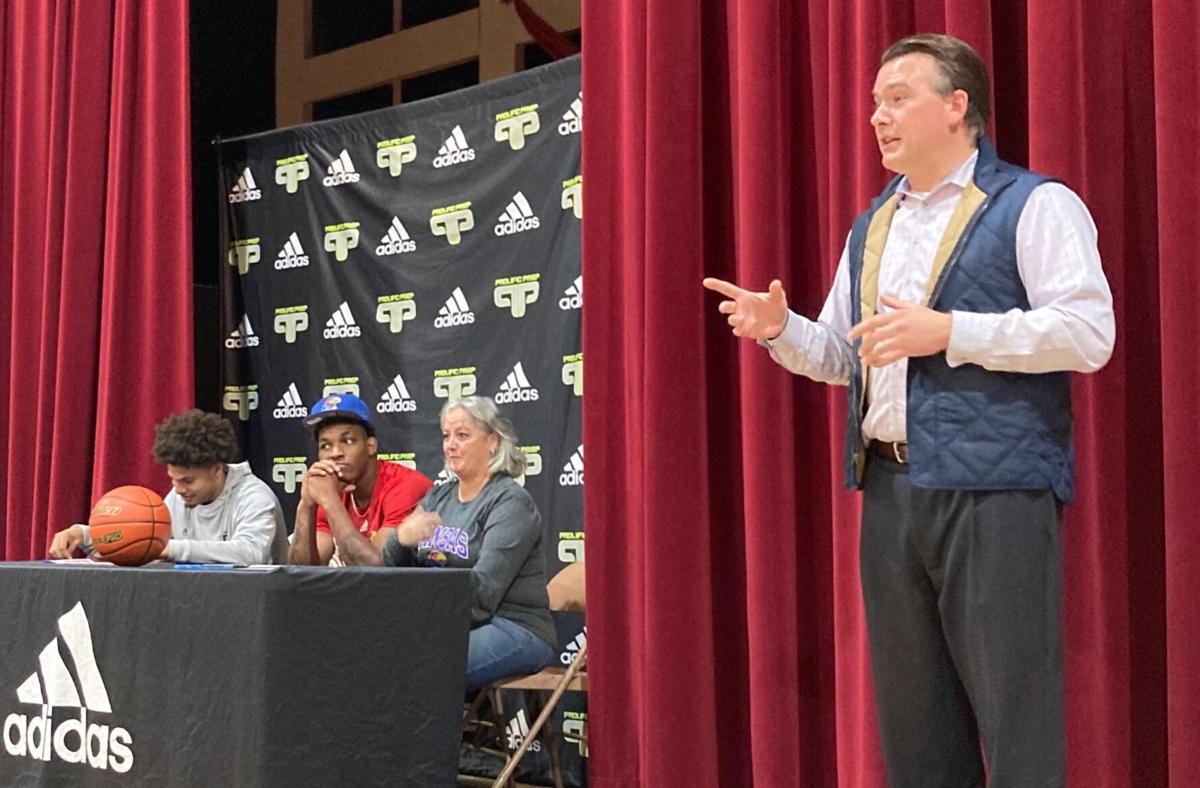 Prolific Prep of Napa Christian co-director Philippe Doherty talks about MJ Rice, who is seated at the table between teammate Jordan Pope and a member of their host family, Rachel Phillips, on Wednesday. 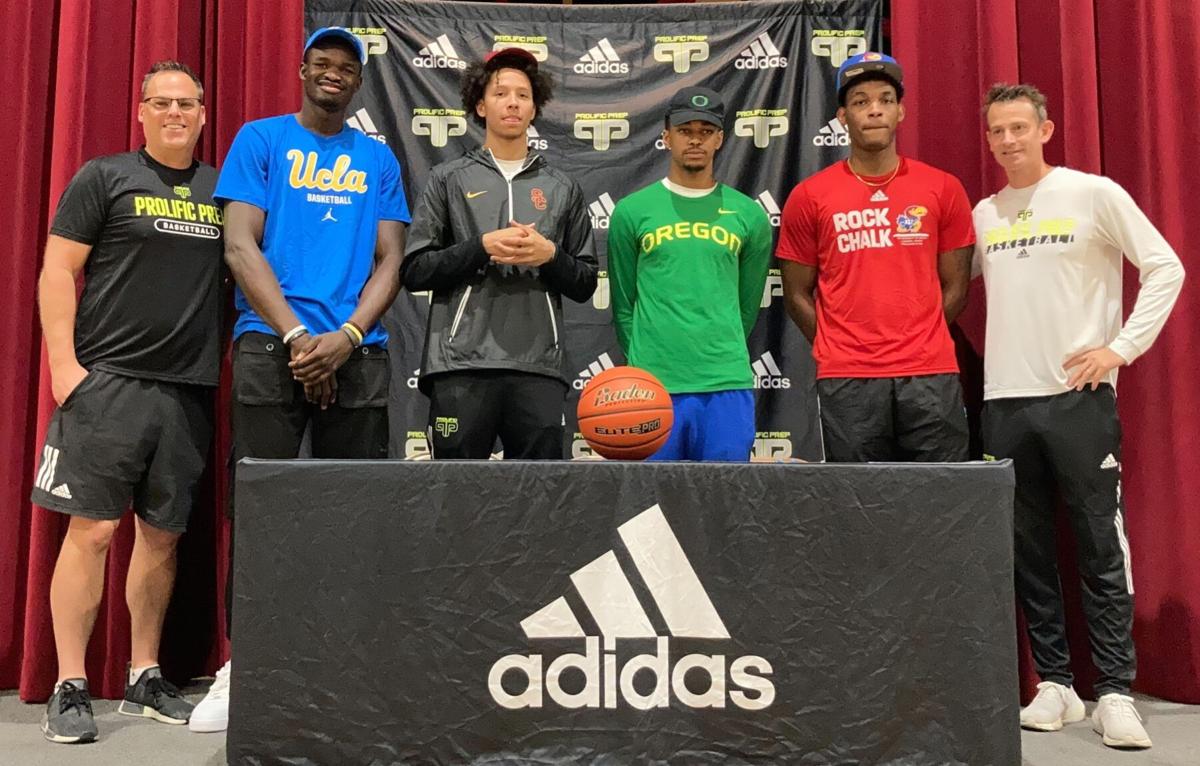 This crop from the early-signing period are some of the highest-rated players Prolific Prep has ever had. From a high-flying big man who has weaponized his motor, to a speedy point guard with NBA size, to a pair of athletes who combine brains and brawn on the court. All four Prolific Prep players are rated as top 35 players in the 2022 class by ESPN.com and three are five-star prospects.

Heading to Westwood to play for UCLA will be the five-star Bona. The 6-foot-10 power forward picked the Bruins over Kentucky and the G-League Ignite.

The term unicorn has quickly become a catch-all cliche in the sports world, but there are few words to describe the uniqueness the Nigerian-born Turkish national brings to a court. Bona is the first Prolific Prep player to select UCLA as his college home and is one of three this year to select a Pac-12 school.

“He's another level when it comes to his athleticism, and his motor is what makes him special,” Prolific Prep head coach Billy McKnight said. “Besides just how great of a guy he is, he brings energy to any room he walks into. He's just always happy, energetic. He's a cornerstone for your culture for any team that would get him and I really believe he's gonna have a ton of success at UCLA next year. And my guess is his stay at UCLA will probably be a short one.”

The second-year Crew player has been described as one of the fastest post players in all of high school basketball and Bona showed that this past weekend at Napa Valley College. The senior threw down a monster dunk and landed hard on his backside and TMG of Southern California attempted a fast break in the other direction. By the time the quick 3-point attempt went into the air, Bona had already sprinted to the other side of the court and was ready for the rebound. Bona would follow up that play with another fast-break dunk on the other end of the court.

The highest rated player in this year’s class is Johnson. The five-star senior is ranked by ESPN at No. 15 overall for the 2022 class. The future Duck is rated as the top point guard in the country and is the third player in Prolific Prep history to sign with Oregon — behind Nathan Bittle last year and Abu Kigab in 2017. Kigab transferred to Boise State in 2019.

Johnson, a 6-foot-3 point guard, has been a menace for defenses during his time playing high school basketball. The first-year Crew member is one of the fastest players in the country regardless of class.

“Oregon is getting a really good passing point guard who can also shoot the ball. People don’t understand how well he can really shoot it from three,” said McKnight. “He is pesky in a one-on-one situation. He is really good in transition and finishing the ball. Oregon isn’t offering just anybody. They have done their homework on anyone they offer.”

The last five-star this season for Prolific Prep is MJ Rice. A native of Henderson, North Carolina, Johnson follows the path of Prolific Prep’s first NBA player, the Detroit Pistons’ Josh Jackson, who was the No. 3 overall pick of the Phoenix Suns after playing one season for Kansas. Rice is in his first year with the Crew and the shooting guard is rated as the 20th overall prospect in the 2022 class by ESPN. The athletic, 6-foot-5 wing can score effortlessly from anywhere on the court and should have the size to give even college defenders issues during his freshman season.

“He can shoot it from the outside and he can drive it to the basket,” McKnight said. “He is physical — I mean, he’s really physical — and people don't understand how well he can actually jump, because he can really jump. Obviously he is going to a great coach in Bill Self and you’d better be strong in that league, because they let a lot of stuff go in that league that they don’t allow in others. I’m excited for him and I think he will do great at Kansas.”

White, a four-star, 6-foot-6 shooting guard who is rated as the No. 35 overall prospect in the 2022 class and is close to five-star status, is the first Prolific Prep player to pick the Trojans.

The Crew usually have one player each season who is known as a high-flying dunker and this year that player is White. The lanky guard has not only performed jaw-dropping slams but is smart on and off the court, sporting a 3.76 core GPA.

“Tre has all the prerequisites,” said McKnight. “He’s got the prototypical size. He's got the athleticism you look for. But what makes him really special is his mentality and his positivity and his ability to take coaching. Obviously he can score, but he also makes his teammates around him better. But it’s the other things that will take him to the next level. He checks a lot of boxes. I think the way (USC head coach) Andy Enfield likes them to play fast and Tre being really, really good in transition, it’s a really good fit.”

Burris was one of the top Bay Area natives over the last few years, the 6-foot-6 power forward having played for Stuart Hall of San Francisco before finishing up his high school career with power program Archbishop Mitty of San Jose. The three-star prospect took a gap year at GSP, so he will still be a freshman next season at Idaho.

“I just thought that Idaho, they just made it home for me,” Burris said. “I was in a good situation with them and they have been recruiting me for a while now. I went on the official visit and it was a program I really could fit in with and just be myself. For the Idaho fans, you’re going to get a lot of excitement. You're going to get some shooting and some athleticism. You’re just going to get a lot of smiles on y’all’s faces.”

The Crew were to play Friday and Saturday night at the Grind Session’s Latitude Longitude Classic in Phoenix.

Players and volunteers get ready for Arab Cup

Tiger Woods Will Not Return To Golf Full-Time

Tiger Woods Will Not Return To Golf Full-Time

Prolific Prep of Napa Christian co-director Philippe Doherty talks about MJ Rice, who is seated at the table between teammate Jordan Pope and a member of their host family, Rachel Phillips, on Wednesday.