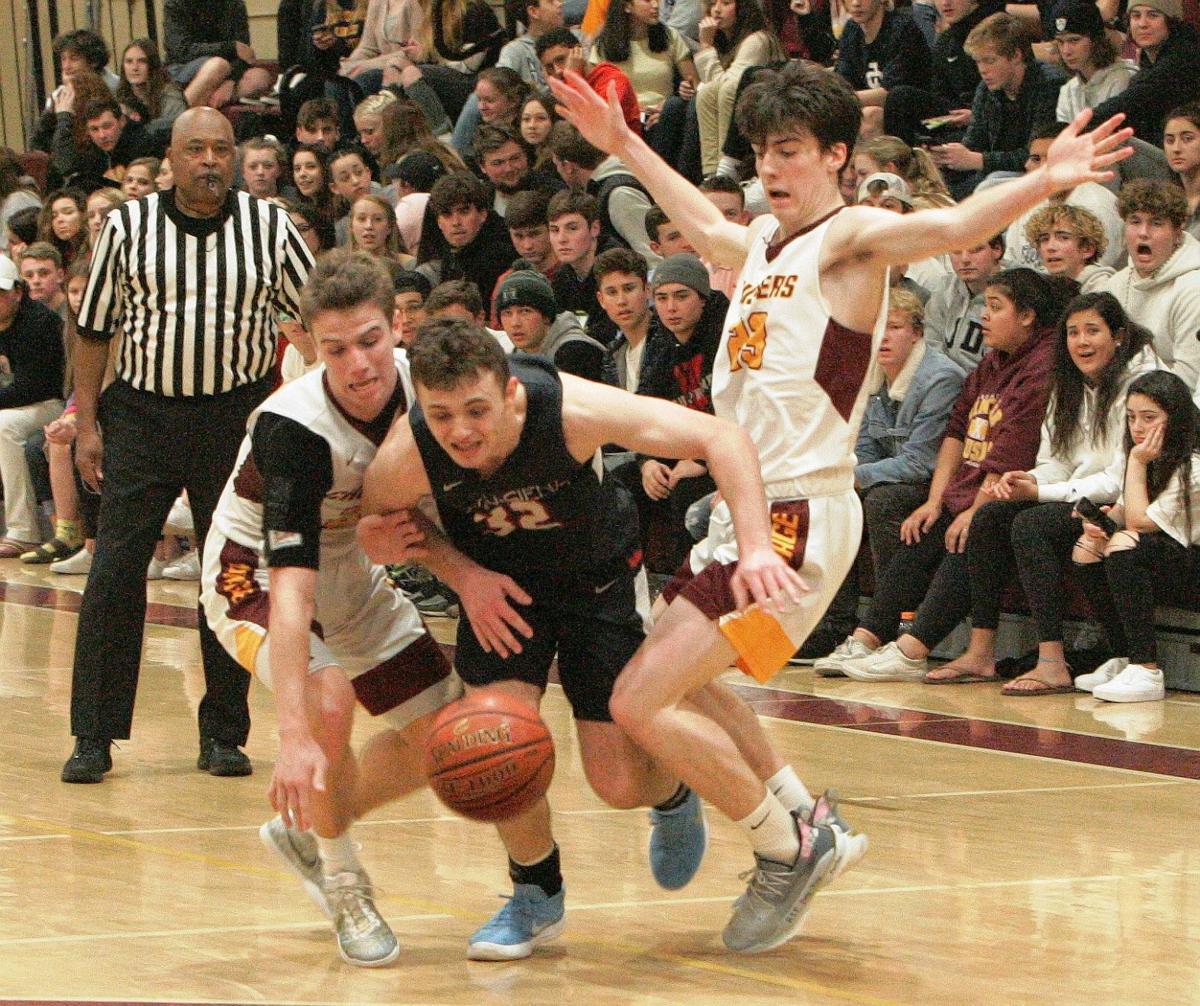 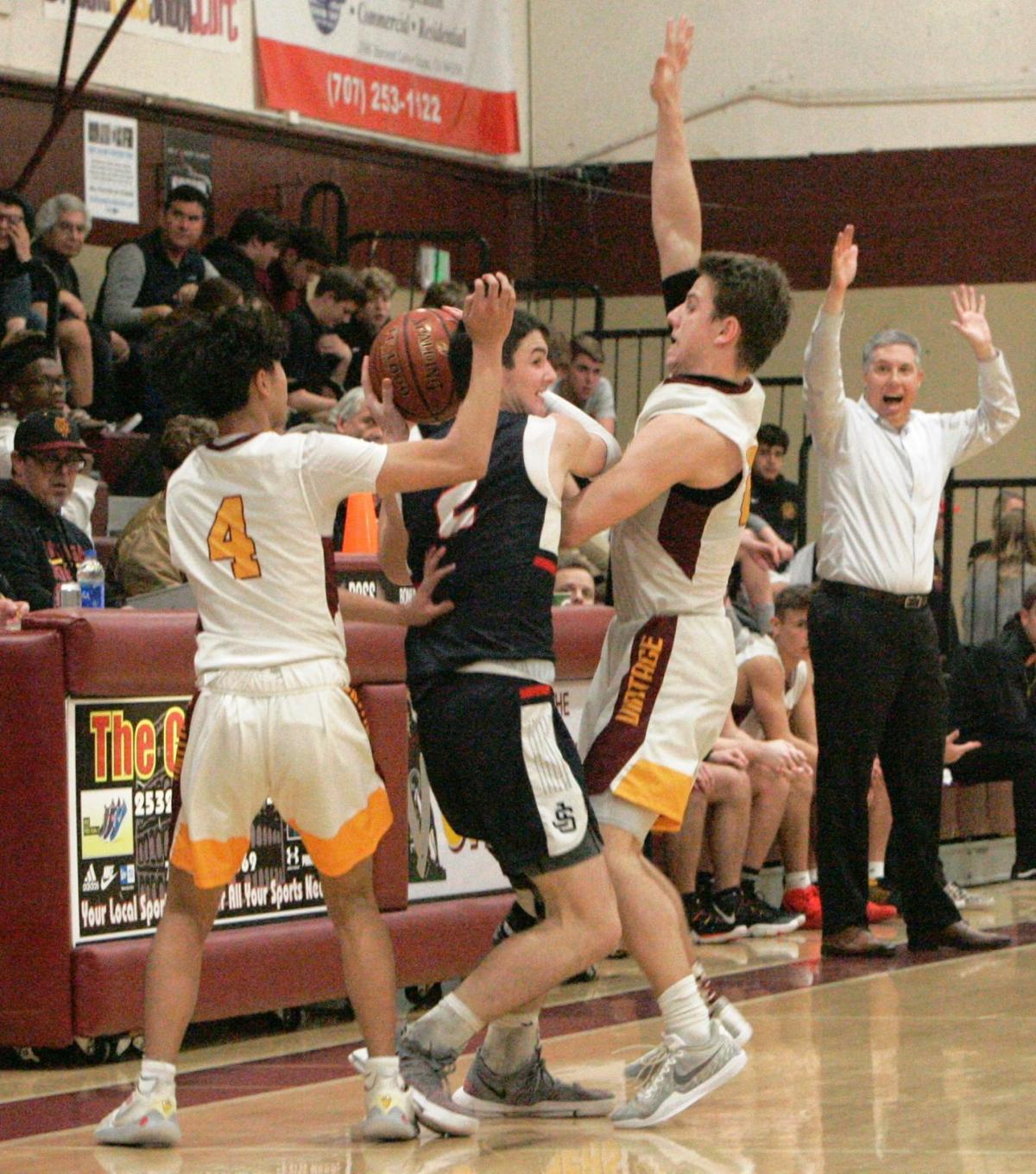 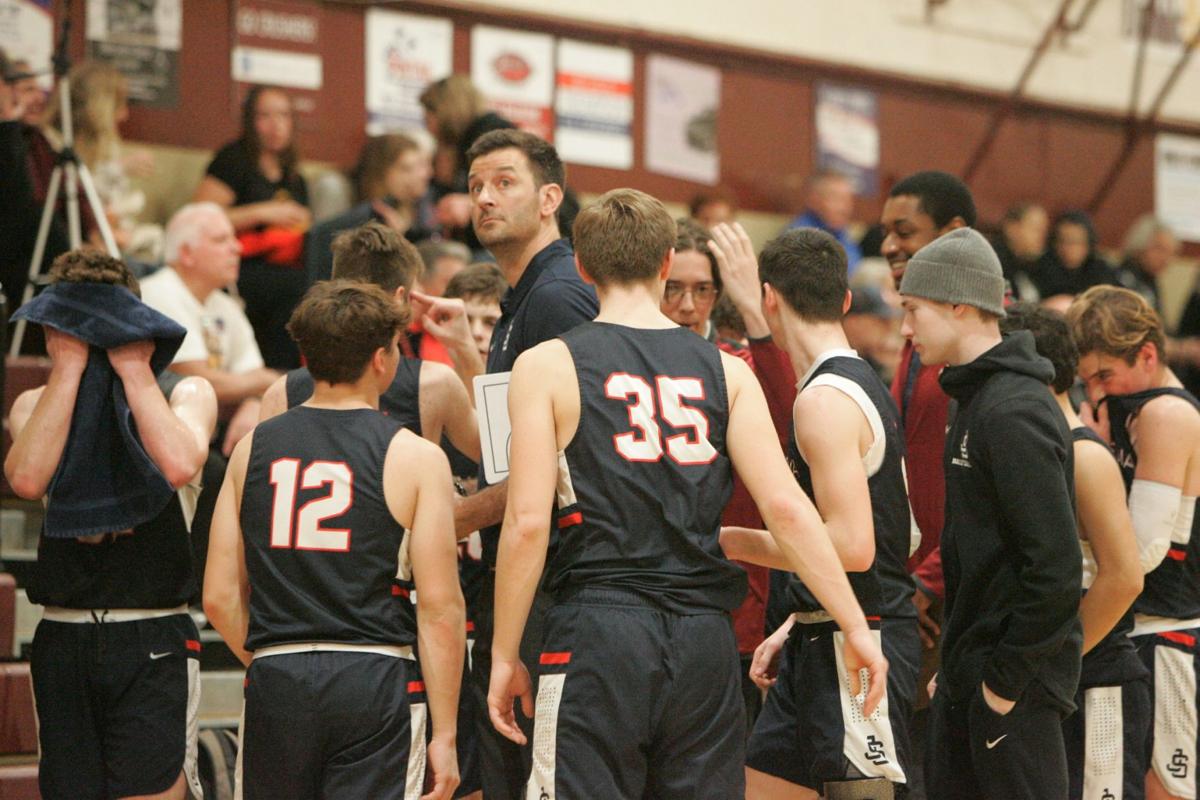 Justin-Siena head coach David Granucci looks at the game clock after calling a timeout at Vintage on Friday night. 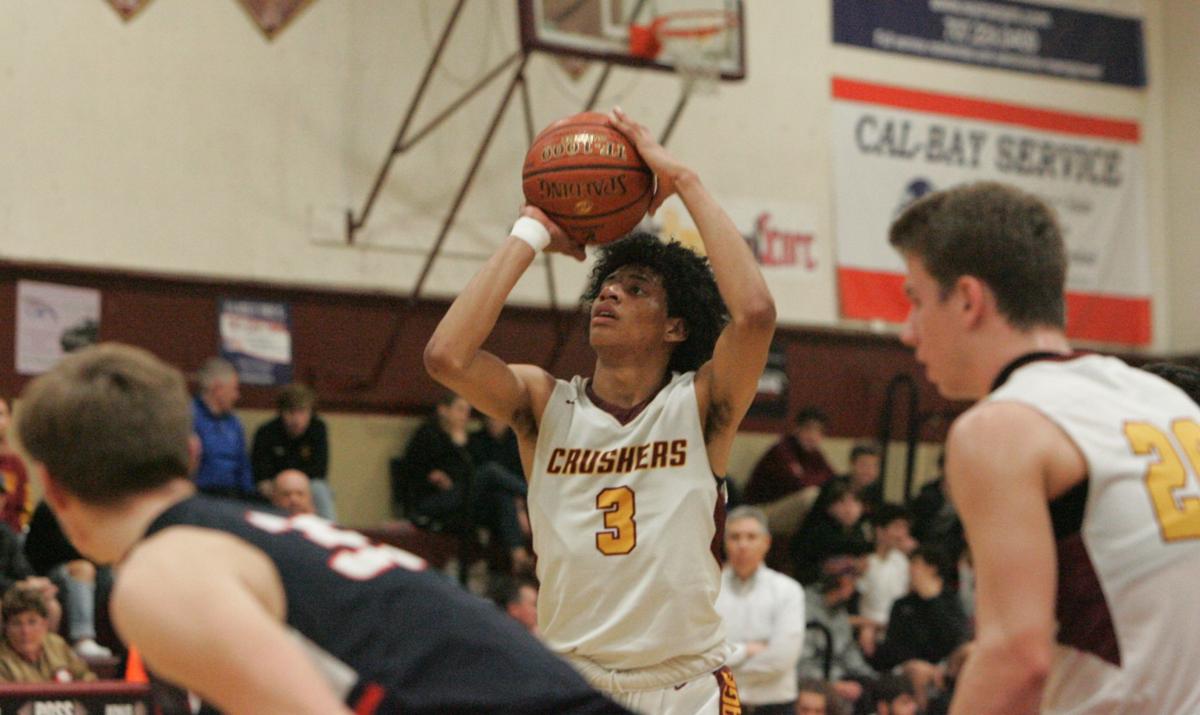 The second-place Crushers improved to 6-2 in Vine Valley Athletic League play, 13-9 overall, and 9-1 at home. All they had to do was come back from being 13 points down midway through the second quarter.

“It’s really been the story of our entire season,” Vintage head coach Ben Gongora said. “We’ve been down by 10 a lot, but we stay calm. We know basketball’s a game of runs.”

“They hit two of them off of offensive rebounds, so that was where our defense was poor,” said Justin-Siena head coach David Granucci. “We talked about that at halftime. We knew exactly what was going to happen. We said ‘We gotta continue to rebound and defend. They’re going to turn up their pressure. There’s going to be bodies flying at you. This is what we need to do to handle it,’ and we didn’t always execute. Our margin of error isn’t always great, so we get exposed when we make mistakes.

“That’s what happens when the game’s not being played at your pace and speeds you up a little bit. We feel more comfortable playing a different style. We got caught up in the game a little bit and because of that, left some guys open for shots. We dropped our hands when we’re usually really good about keeping a high hand on guys. They hit six threes in the second half. That’s the game.”

Justin-Siena never gave up, regaining the lead several times. But the young Braves had won only one close game all season, 51-50 at Napa High three weeks before. They took their last lead on Friday with 6:33 left in the game, 38-37.

“You want to win every game you play and we’ve had a lot of close ones, obviously,” Granucci said. “When you’re building something, it’s going to take time for that to ultimately happen. But our guys are battling. We’re in these games. We just haven’t finished them and that’s partly on me, as well. I’m trying to do my best to help these guys finish these games and make plays down the stretch.

“We’re doing a really good job. We’re getting better every day. That’s all you want to do, and trust that process. Winning solves a lot of problems, and you want to see the fruits of your labor and see yourselves win those games. But our guys are battling, fighting and getting better. We’re young with two seniors and they’re working their tails off.”

Logan Nothmann answered with a 3-pointer that put Vintage up 40-38. McDevitt hit a jumper that tied it 40-40 with 3:34 left, but the Crushers pulled away by forcing turnovers with a fierce trapping defense and by hitting shots.

“In the first half they pulled us out of our game, tried to slow us down,” said Nothmann. “Once we started to pick up the defense and pressure them, we got back into our groove and made them play at our pace.”

Imani Lopez juked his way inside for a layup to make it 42-40. After Justin-Siena freshman Vincent Jackson missed the front end of a one-and-one, the Crushers went on a 9-0 run to put it away. Blake Murray hit two buckets, Josh McCormick had one, and Nothmann sank his third 3-pointer of the quarter.

“How about the gamer in him, coming through in a tense moment like that,” Gongora said of Nothmann. “Justin-Siena did a great job of making a little run and giving us a challenge, and Logan came in, unwavered, and just focused on the moment.

“He was calm, clearly. He didn’t force his shot. He didn’t get desperate. No one on this team when we’re down thinks ‘I gotta win the game on this play’ or ‘I’ve got to win the game and deviate from what we do.’ It’s maturity, and Logan is the ultimate gym rat. His basketball IQ, leadership and grit are off the charts, and big players step up in big moments.”

They were the first treys for Nothmann, a junior team captain, in the three games he’s played since coming back from a broken fibula in his shin that had sidelined him for six weeks.

“This was my first game back with significant minutes,” Nothmann said. “It’s been tough to come back because I don’t have my strength back yet, but I’m starting to come back now. I’ve been at practice every day, trying to do everything I can – in the beginning, just shooting free throws, working back my strength, trying to get confidence, keep my shot. I didn’t force anything. I just did as much as I could tolerate.”

Added Gongora, “He’s a captain; he did not relinquish those duties. He still showed up every day. He was a vocal leader in practice, sometimes too vocal. But it’s a testament to his grit, his resolve, that he didn’t have a pity party. It starts at home with his parents. They were very supportive. If you play sports, things are going to happen. “

After McDevitt helped the Braves to their 13-point lead in the second quarter with a pair of 3-pointers, the only three Justin-Siena hit was one in the third quarter by Humphries. But that wasn’t the problem.

“It wasn’t needing more threes, it was more us giving up threes and turning the ball over, which changed the pace of the play more towards their favor, and us just not being as composed as we could be against their pressure,” Granucci said. “The first person I’m looking at is myself as far as where we went wrong, but even though we allowed them a momentum switch in the third quarter, our guys stayed composed and battled throughout and stayed in the game.”

Justin-Siena was feeling good after beating an American Canyon team on Wednesday that had handed Vintage its first home loss of the season a week ago.

“We’re just trying to win every game,” McDevitt said. “It’s not desperation. We’re doing everything we can to get a win every time we’re on the court.”

Gongora, in his first season back at the Vintage helm since 2003-04 and 2004-05, said the VVAL is starting to remind him of the Monticello Empire League that Vintage and Napa left two years ago.

“I miss the MEL, but it seems in basketball this is a really competitive league,” he said. “It’s like we’re in the right league. Anybody can beat anybody.”

Granucci, in his second year at the Justin-Siena helm, is the fifth head coach the Braves have had since Ray Particelli’s five-year run from 2010 to 2014.

“I hope David sticks around and builds this thing out, because he’s got a lot of young pieces and I know that program has suffered over the years from coach turnover,” Gongora said. “I tip my hat to him. For 1½ quarters, they took us out of our game. They played their game and they dictated what we did. But we turned up the defense and our transition game, because and that’s what we do. Justin got to see what type of team we really are because in the first quarter, that wasn’t really who we are.”

McDevitt said he doesn’t feel he has to carry an inordinate amount of the scoring load.

“I don’t feel pressure like that. I just try to come out here and do my job, and I know my teammates are going to do theirs,” he said. “It’s just a matter of executing and doing what the coaches tell us to do. Of course we wanted to win this game, but we’ll go into our next game thinking the same thing, just doing what we can to win.

“The young guys are really buying in, so it hasn’t really been tough to try to get them to focus and get on board. They’ve done everything they can, so I’m really happy with their effort. We just need to work on handling pressure and rebounding. Those are probably the two biggest things.”

McDevitt is in his fourth varsity season, just like Jackson plans to be in three more years. The only other senior is second-year varsity player Zach Johnson.

“Liam’s really supportive. He picks me up when I’m having a hard game,” Jackson said. “I feel like we definitely can win. It’s just the little things we have to get better at, even though we have only two seniors on the team. It’s usually the third quarter that’s hardest for us. But if we just work on that and get ourselves going, we’ll be fine. It’s just staying calm under pressure. We have to keep our composure and execute. We want to send Liam and Zach off with a good season, so we’re trying our hardest.”

The Crushers were to come back to their gym Saturday night to host first-place Petaluma. The Trojans fell to 6-1 in VVAL play Friday night with a 62-54 loss to Sonoma Valley (6-2 VVAL), the team tied for second place with Vintage. With a chance to climb into first place in the offing, Gongora arranged a Saturday team lunch to keep his players on the same schedule on a day they don’t go to classes.

“We’re back,” Nothmann said, “looking for a chance at first place in league tomorrow if we can beat Petaluma.”

Vintage High senior Dominic Smith will take a 35-10 record to the state meet after placing second at 220 pounds at the NCS Wrestling Championships this weekend.

Four Napa Valley wrestlers are competing in the state meet this weekend.

The Crew honored their seven seniors and two McDonald's All-Americans during Crush in the Valley II over the weekend. They also improved to 26-3 on the season.

Justin-Siena head coach David Granucci looks at the game clock after calling a timeout at Vintage on Friday night.