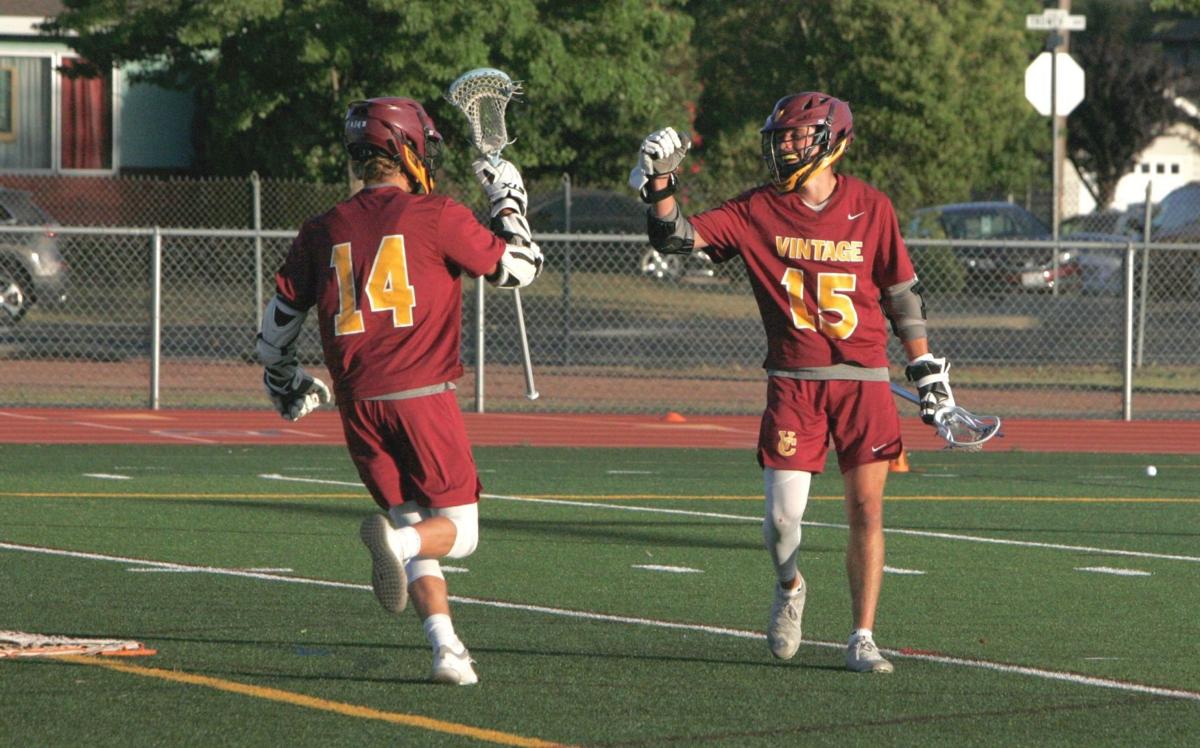 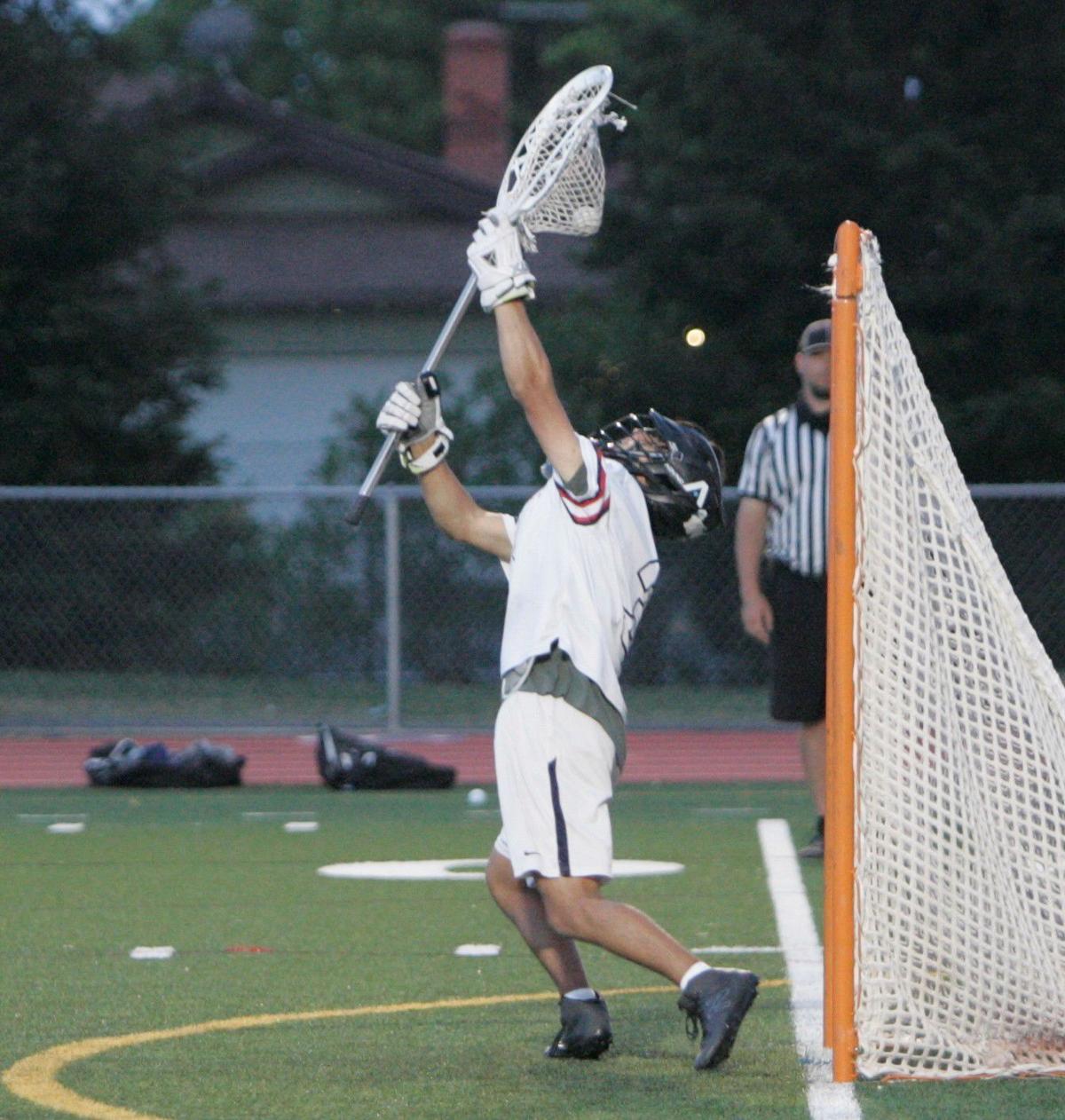 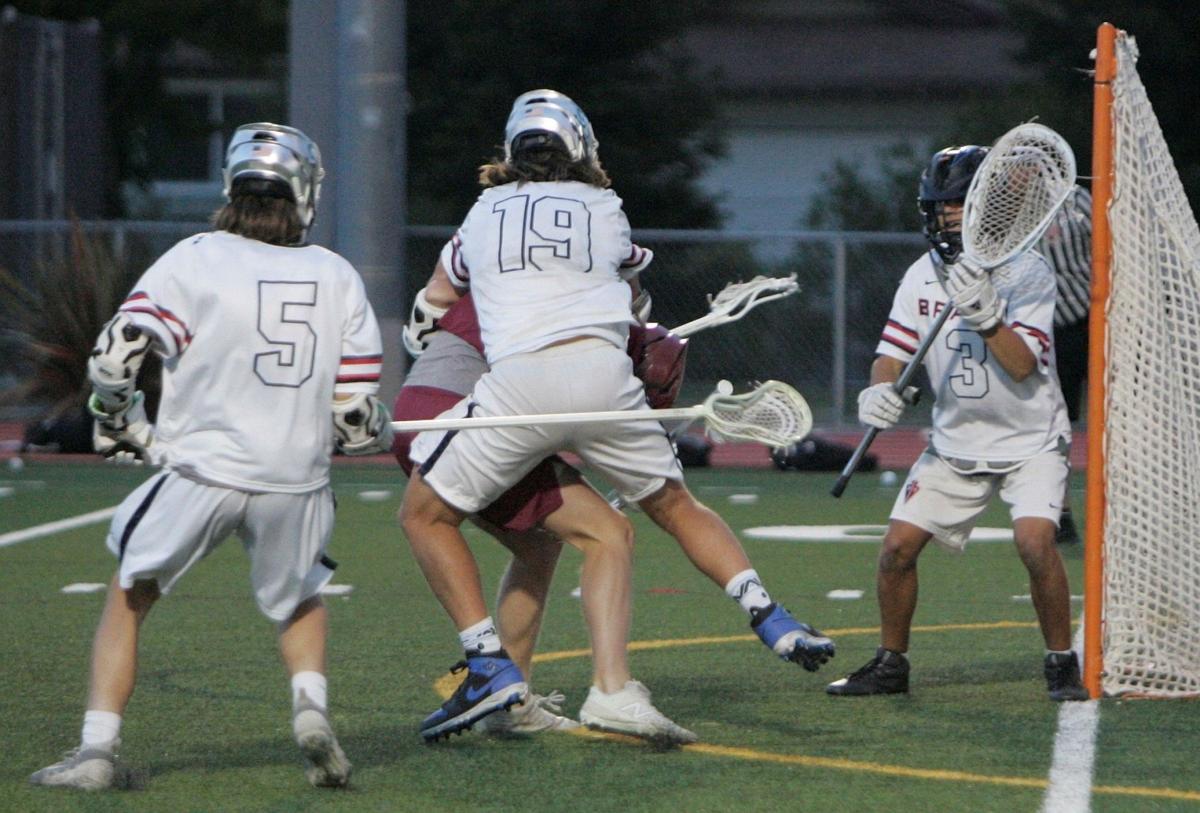 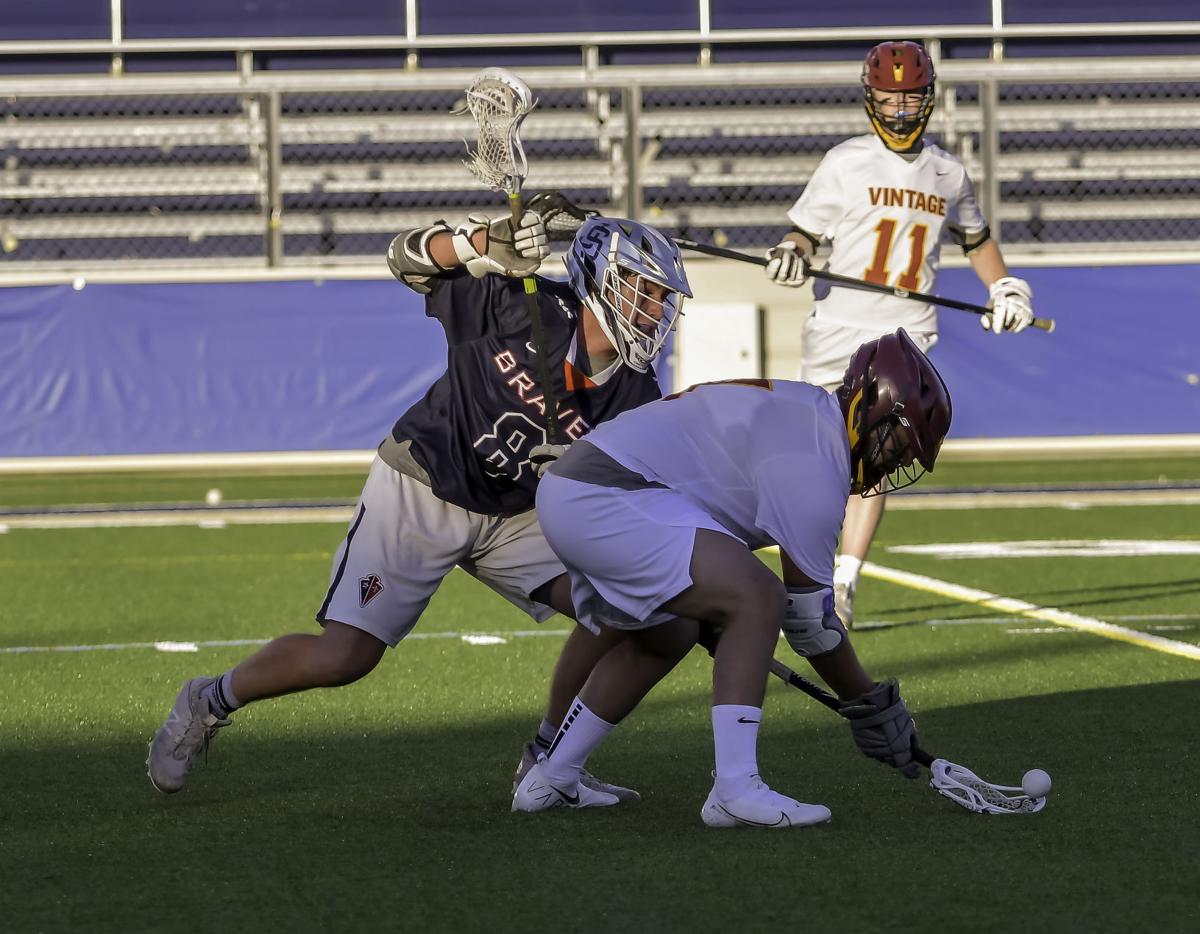 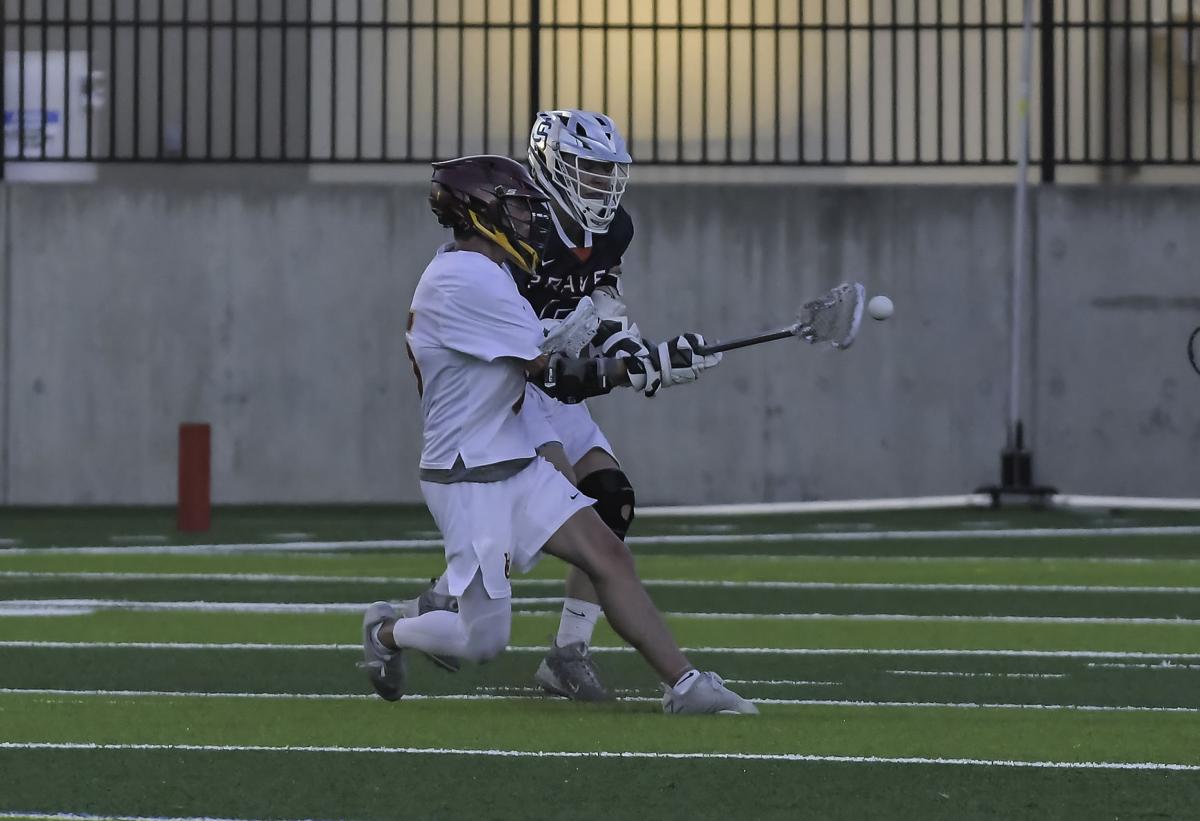 Vintage's Jackson Waters, left, gets a shot on goal against Justin-Siena at Memorial Stadium on April 27. 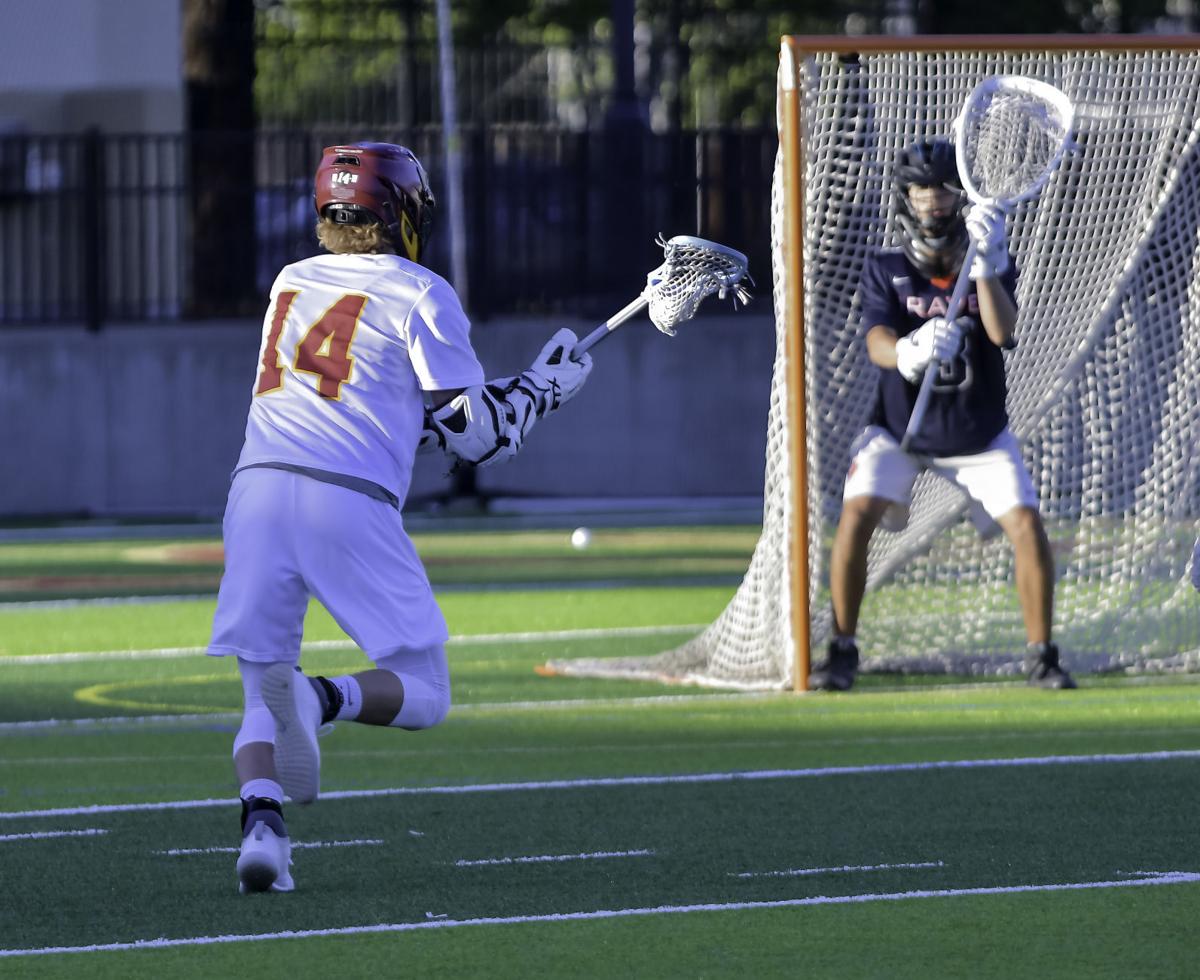 Vintage's Donovan Waters drives in for a shot on goal against Justin-Siena goaltender Jack Duffy at Memorial Stadium on April 27. 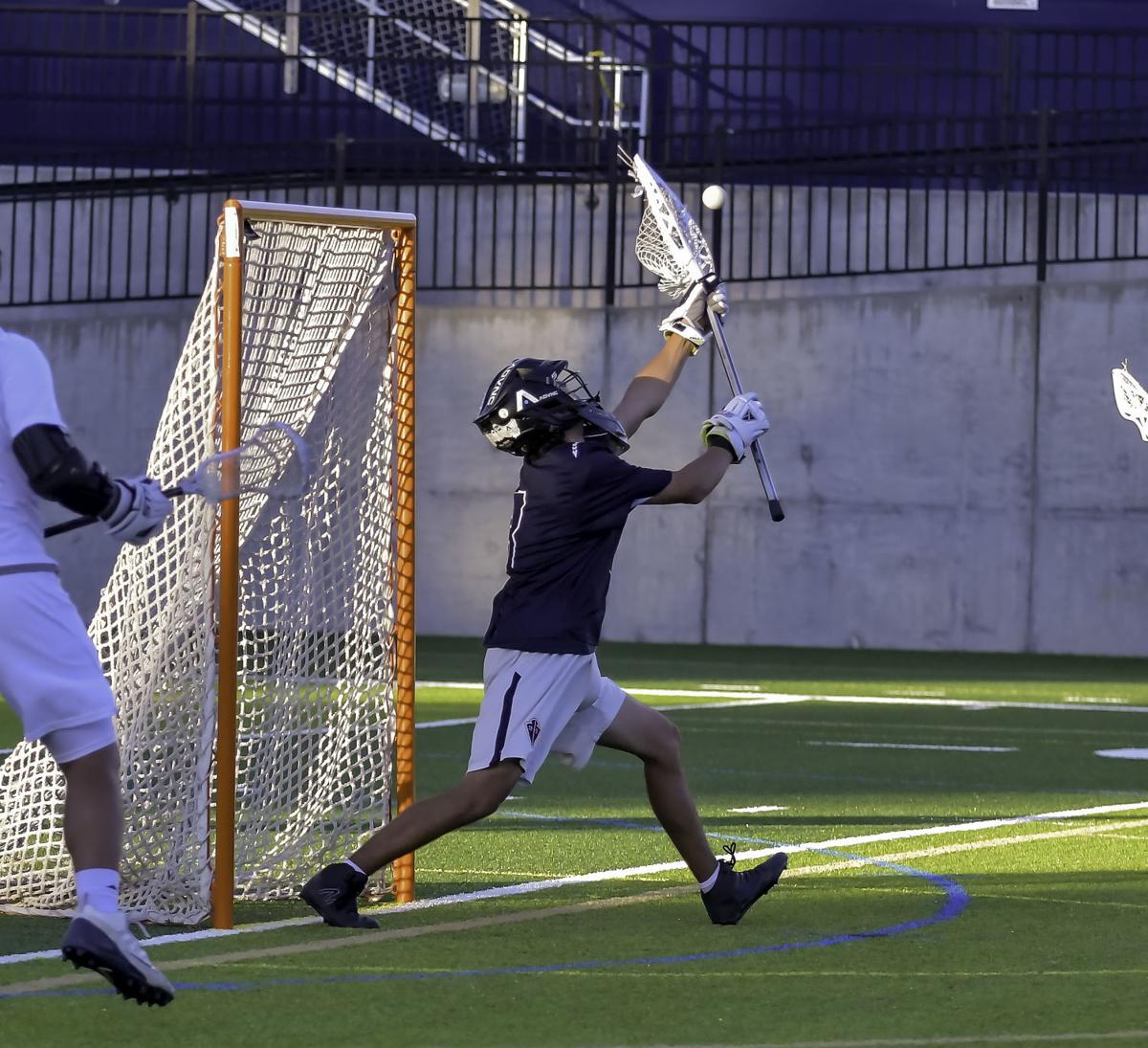 Justin-Siena goaltender Jack Duffy makes a save against Vintage at Memorial Stadium on April 27. 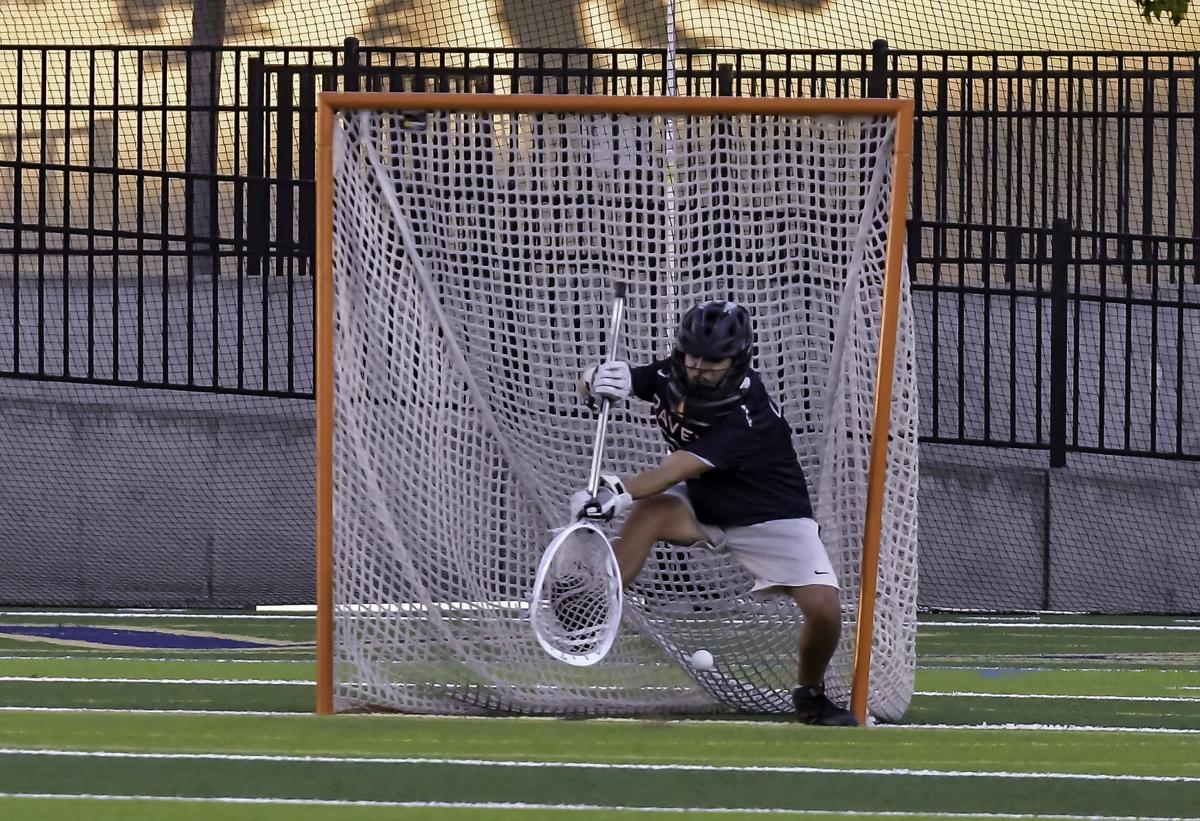 Justin-Siena goaltender Jack Duffy can't stop a Vintage goal late in the first half at Memorial Stadium on April 27. 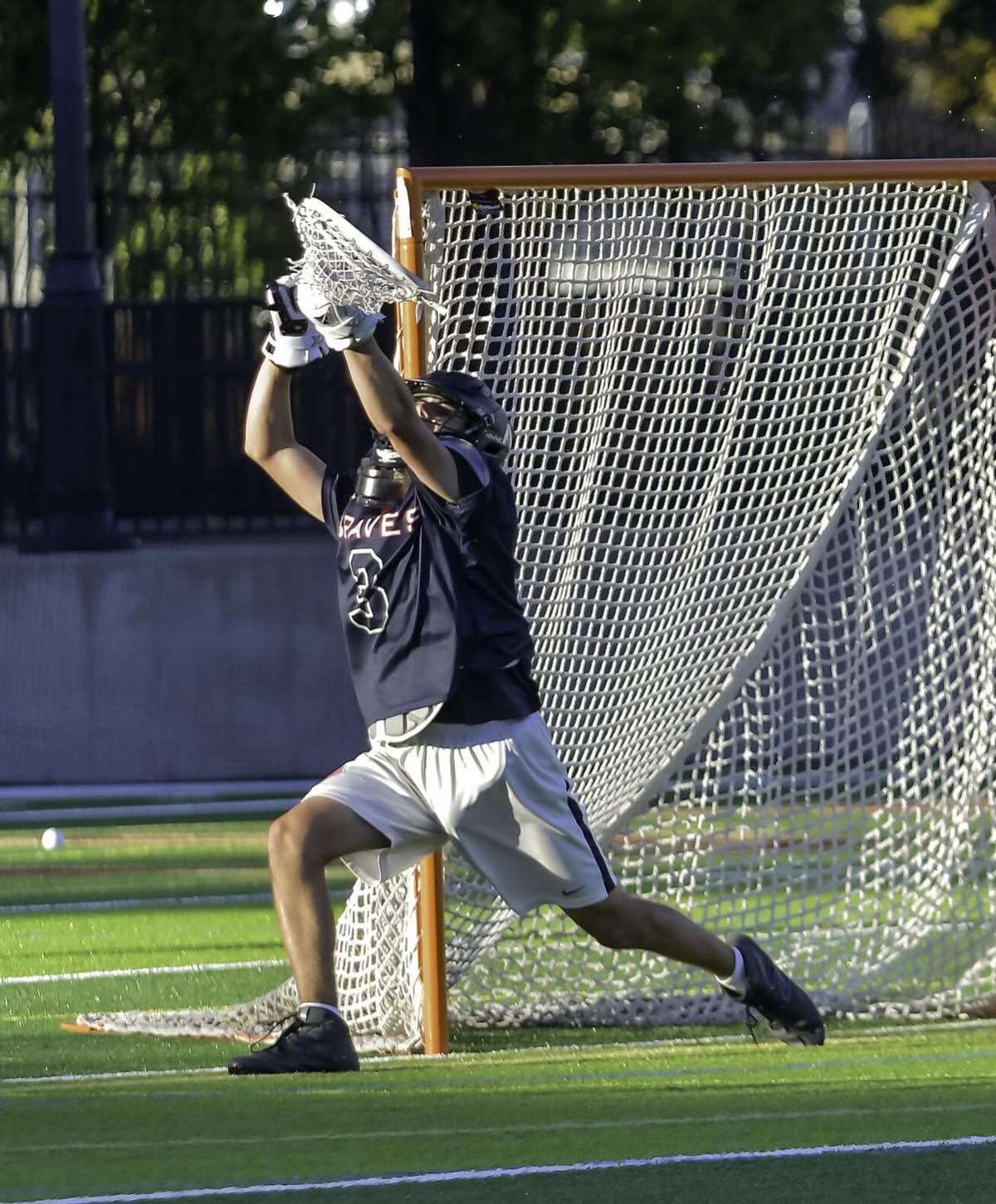 After last year’s 5-1 start became the Crushers’ final record due to the COVID-19 pandemic halting things in early March, Vintage finished a nearly flawless 7-1 in the VVAL and 8-3 overall this year.

Vintage led 5-1 after one quarter and extended to 8-1 in the second stanza before Justin-Siena scored three unanswered goals to make it an 8-4 game at halftime. The Braves had cut it to 10-7 after three quarters, but couldn’t get another goal.

Alec Umutyan, who will continue his lacrosse career at Colorado, had 3 goals and 6 ground balls for the Crushers. Chapman University-bound senior Jackson Waters had 3 goals, 1 assist and 4 ground balls, and his brother, sophomore Donovan Waters 3 goals and 3 ground balls.

Vintage head coach Dr. David Eade said it was the last lacrosse game he’ll coach after 13 years of coaching in Napa, starting with the Napa Force junior lacrosse club in 2008. Eade said he needs to devote more time to the business he’s had in Napa for 23 years, Eade Family Chiropractic.

Eade was instrumental in getting lacrosse approved by the Napa Valley Unified School District, and Vintage and Napa High finally had girls and boys teams in 2020. Vintage couldn’t field a girls team this year, nor could Napa High get together a boys team, due to badminton, baseball, basketball, soccer, softball, track and field, water polo, wrestling and volleyball also needing to fill teams for a “Season 2” that started in mid-April.

“The momentum we had last year really helped us,” Eade said of the 5-1 start. “Although the one thing we found last year that brought unity to the team was weight training, which we couldn’t do (after the March 2020 shutdown) because we didn’t have access to the gym. So I think we lost some of the chemistry and it took a little bit longer to jell. We played (nonleague opponents) Vista del Lago and Marin Catholic and literally 85% of their players play on a travel team, so it was like playing a professional team that plays all year-round. We tried to put up a good fight.

“Our boys did a great job," added Eade, who had 9 seniors this season. "They started to jell 3-4 weeks ago and move the ball around (on offense). One of our seniors, Bill Chaidez, had never touched a lacrosse stick ever until eight weeks ago and he had more ground balls than anybody else on the team. Last year was the first time his (twin) brother, Wyatt, had ever picked up a ‘D’ pole and he played in six games.”

For the Braves, lone 12th-grader Connor Machado had a team-high 4 goals and an assist on his Senior Night. Jack Ryan, Drew Hummer and Dante Leonardi each added a goal, Kane Williams chipped in an assist, and goalkeeper Jack Duffy tallied 14 saves.

“First, congratulations to Vintage on the game on Friday night,” Justin-Siena head coach John Murray said. “I thought their seniors, in particular, stepped up in big moments.

“I’m proud of the effort and determination we showed. We dug ourselves a big hole in the first quarter and it was too much to climb out. Vintage came out blazing in the first quarter and it took us a little bit to adjust. We made some changes to our faceoffs and defense to try and slow down their offense. Our offense finally came alive behind Connor’s effort. He really spearheaded the run we went on.”

The Braves (4-5 VVAL) will close their fifth season with Murray at the helm when they visit first-place Casa Grande (7-0 VVAL) at 7 p.m. Friday.

“It was a tough season at Justin this year,” Murray said. “We were coming off a year in 2020 where we were looking to compete for a Division 2 state championship. We caught the injury bug this year and had some games where we fielded only 13 to 14 healthy players. This forced some inexperienced players to step up big time, and I’m proud of their effort. The leadership on the team really showed when these newer players stepped up in big moments throughout the season.”

Vintage's Jackson Waters, left, gets a shot on goal against Justin-Siena at Memorial Stadium on April 27.

Vintage's Donovan Waters drives in for a shot on goal against Justin-Siena goaltender Jack Duffy at Memorial Stadium on April 27.

Justin-Siena goaltender Jack Duffy makes a save against Vintage at Memorial Stadium on April 27.

Justin-Siena goaltender Jack Duffy can't stop a Vintage goal late in the first half at Memorial Stadium on April 27.