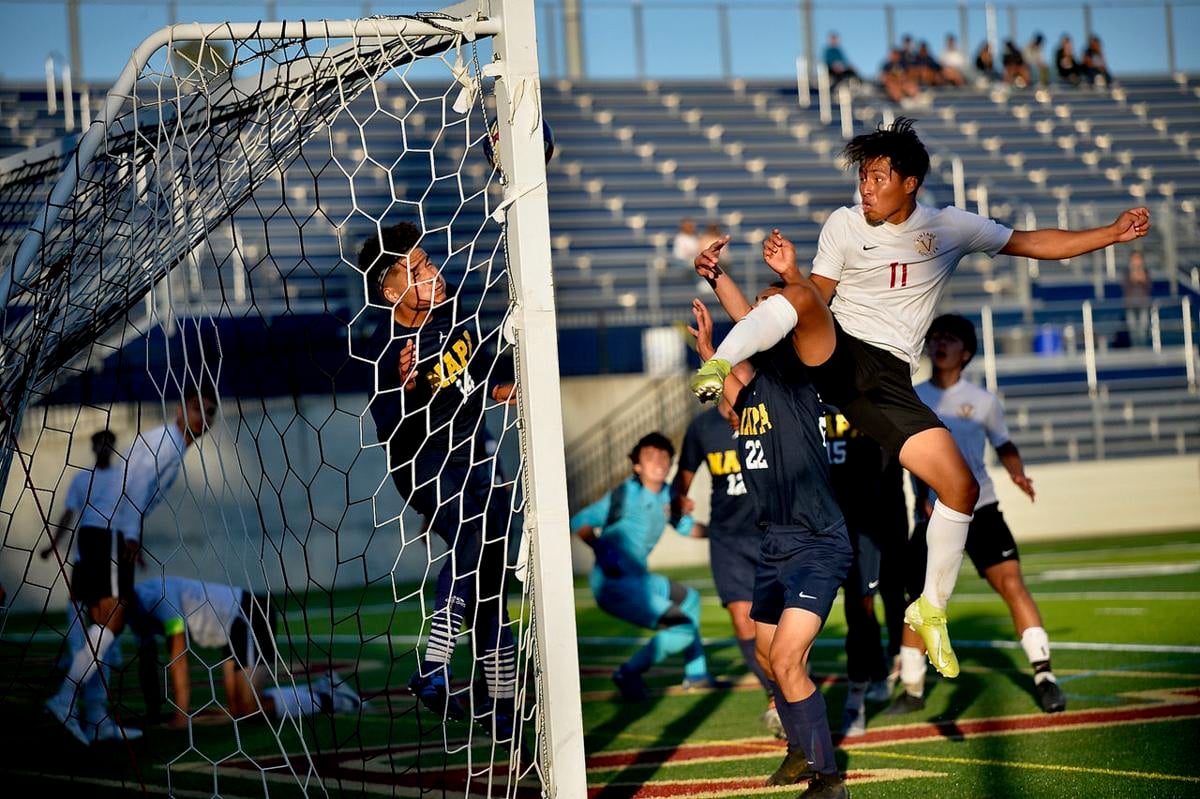 An airborne Yahir Escalona (11) of Vintage and Napa's Ulises Cruz, behind the net, swat at a corner kick headed by Vintage's Jason Fuentes for the winning goal Thursday night. 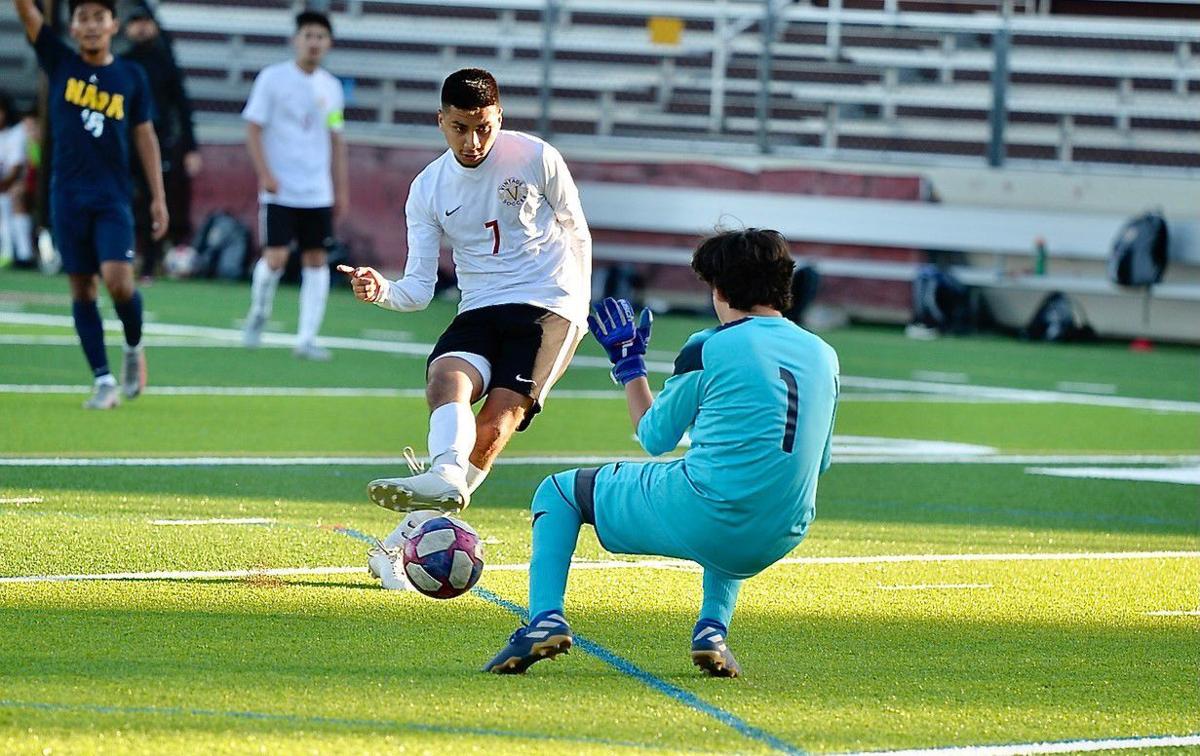 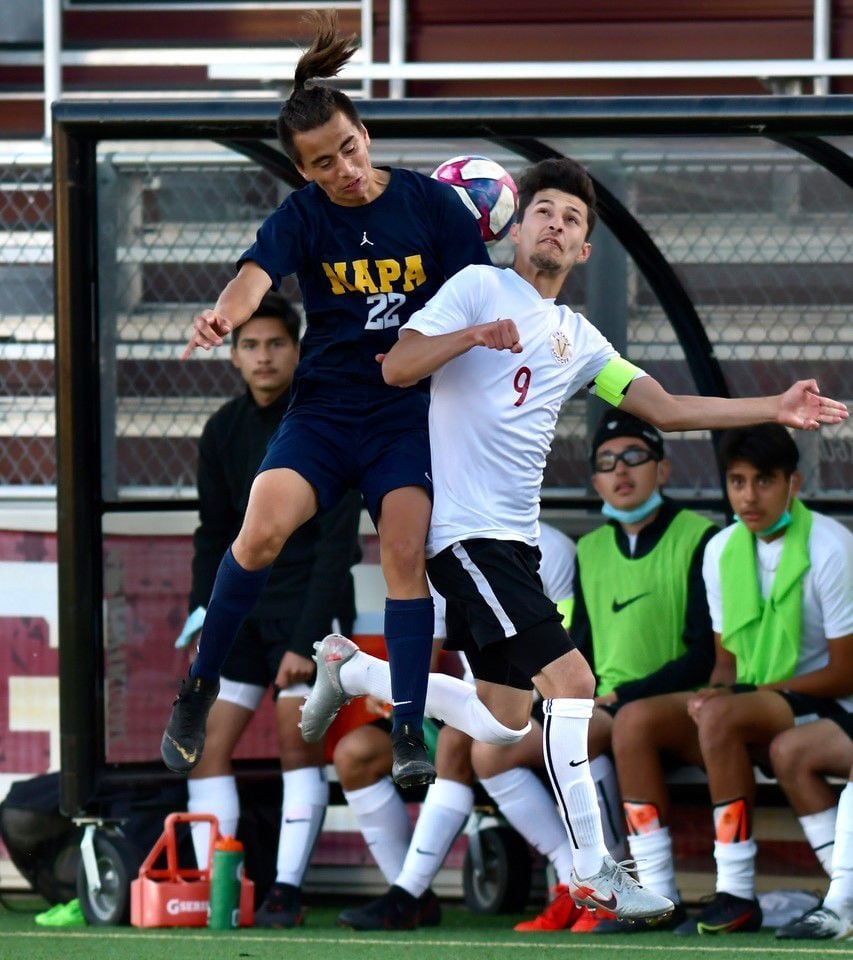 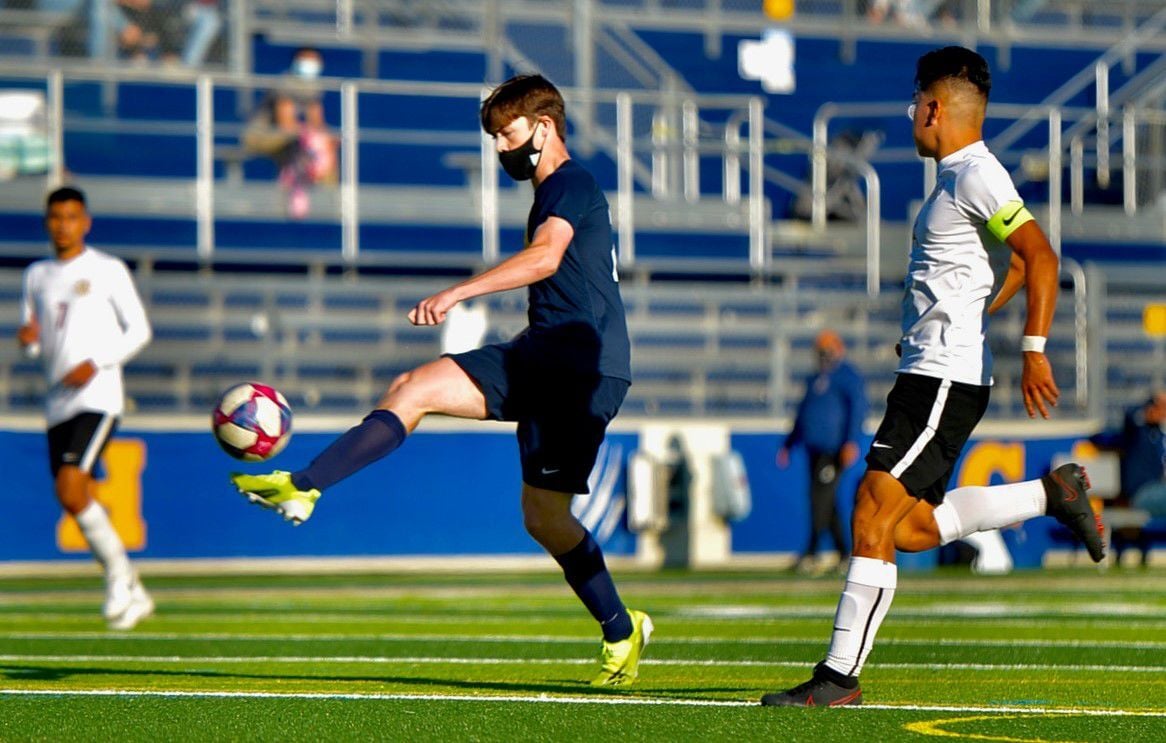 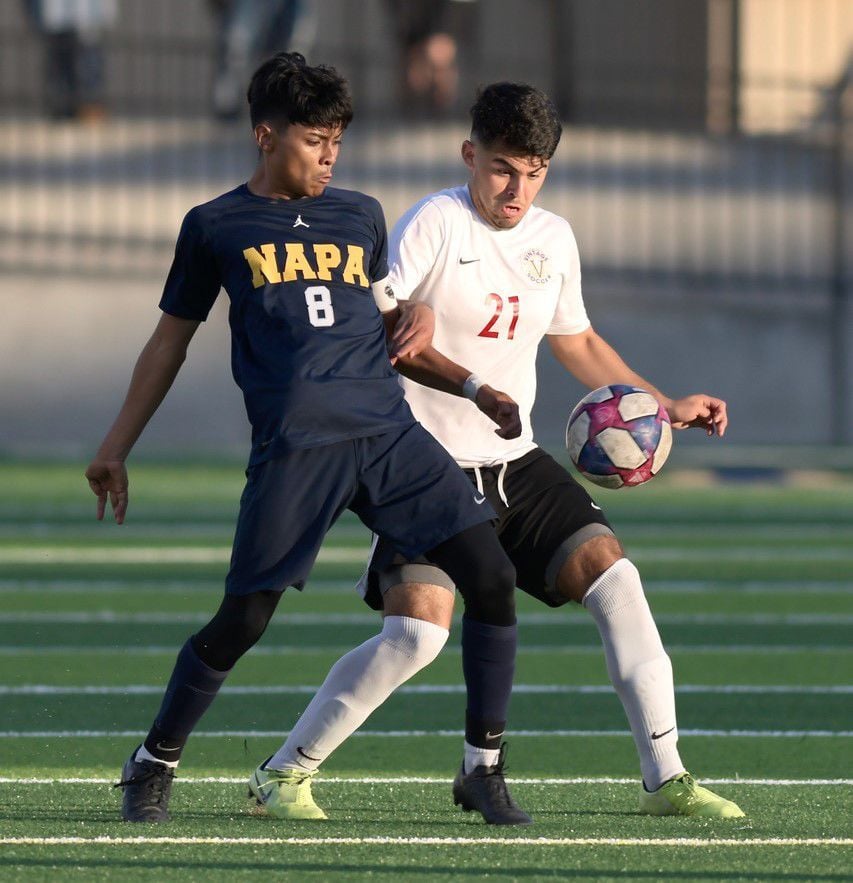 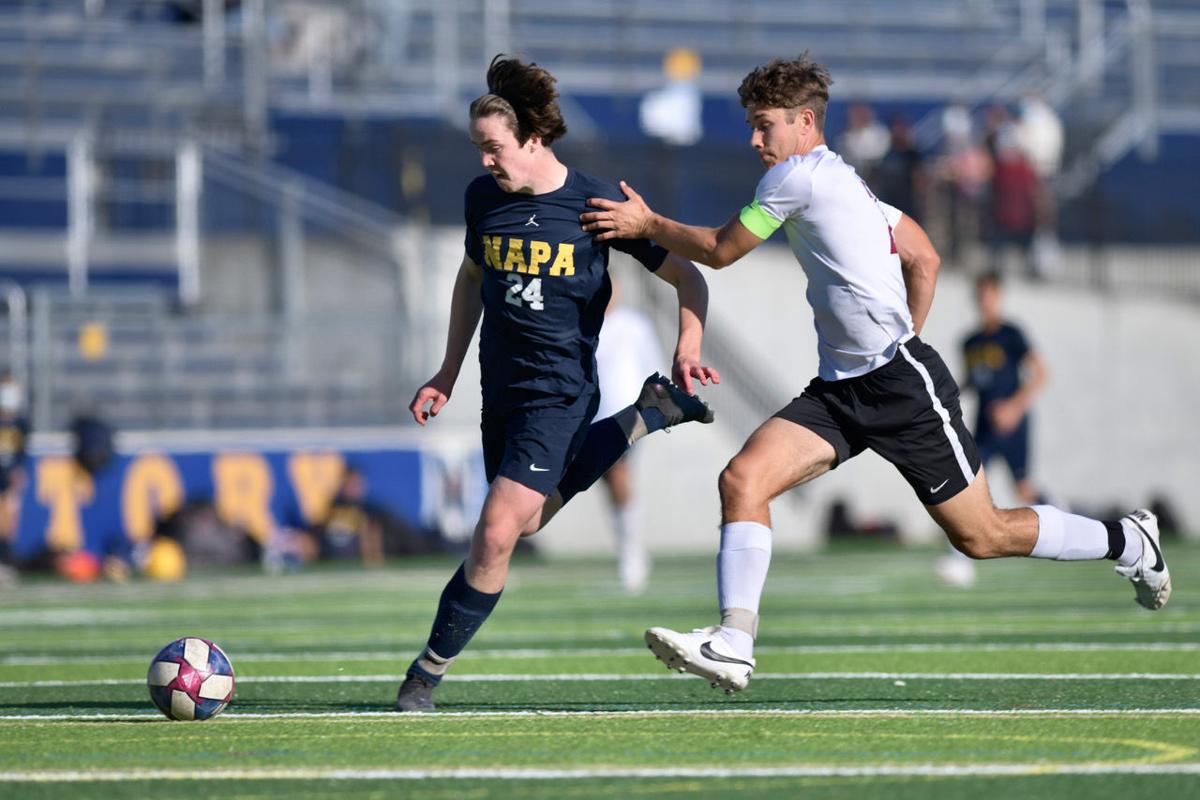 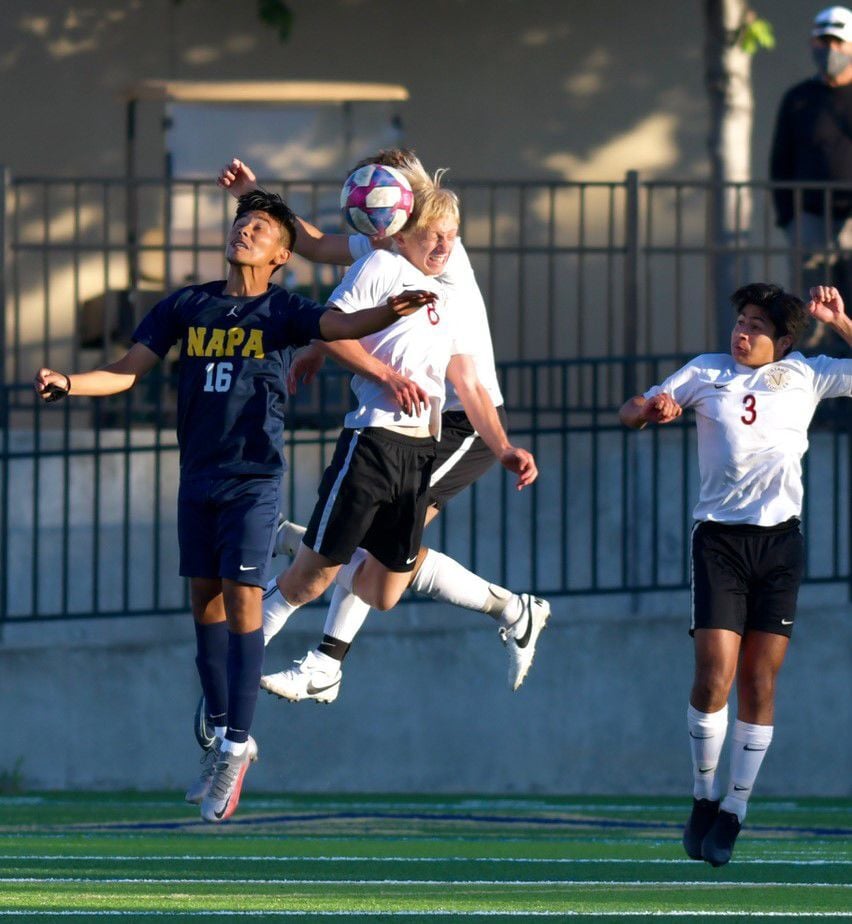 Luke Shea (8) and Gabe Cendejas (3) of Vintage and Napa High's Cesar Guzman (16) go up for a header Thursday night at Memorial Stadium. 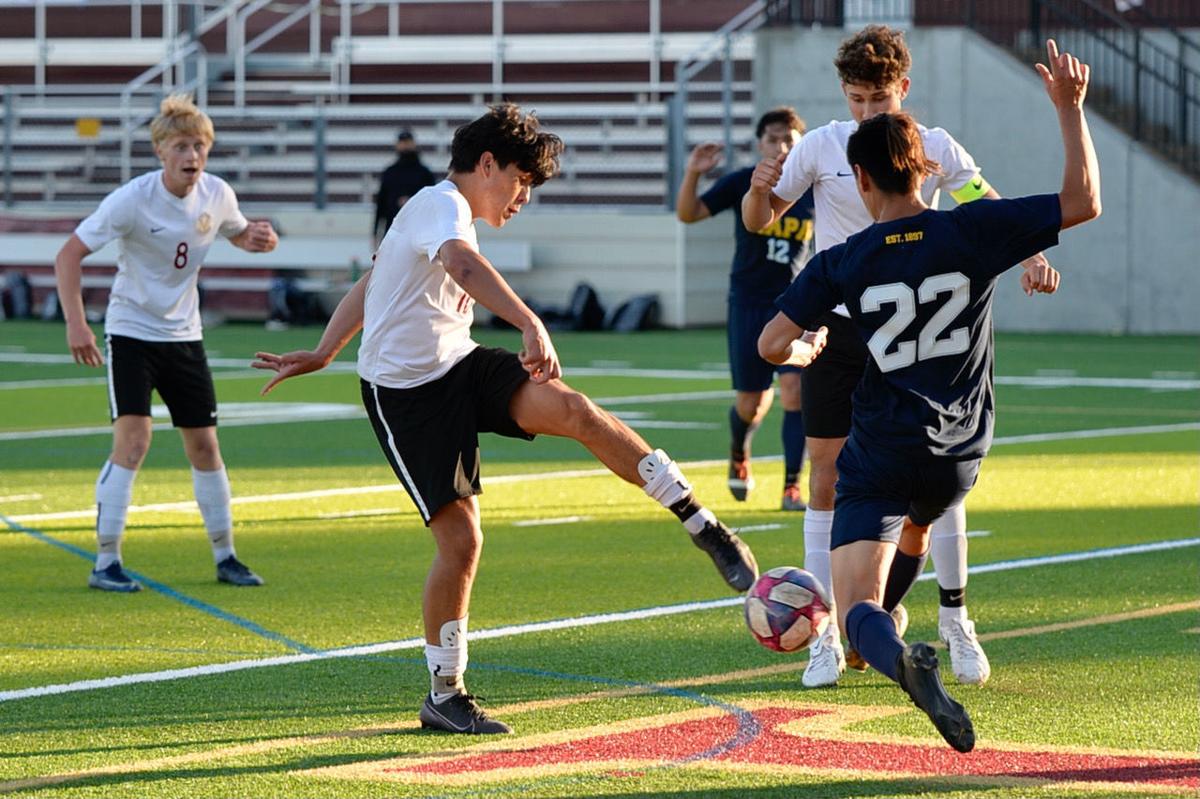 Vintage's Emmanuel Duran kicks the ball past Napa High's Salvador Leon (22) for an apparent goal, which was nullified, Thursday night at Memorial Stadium. 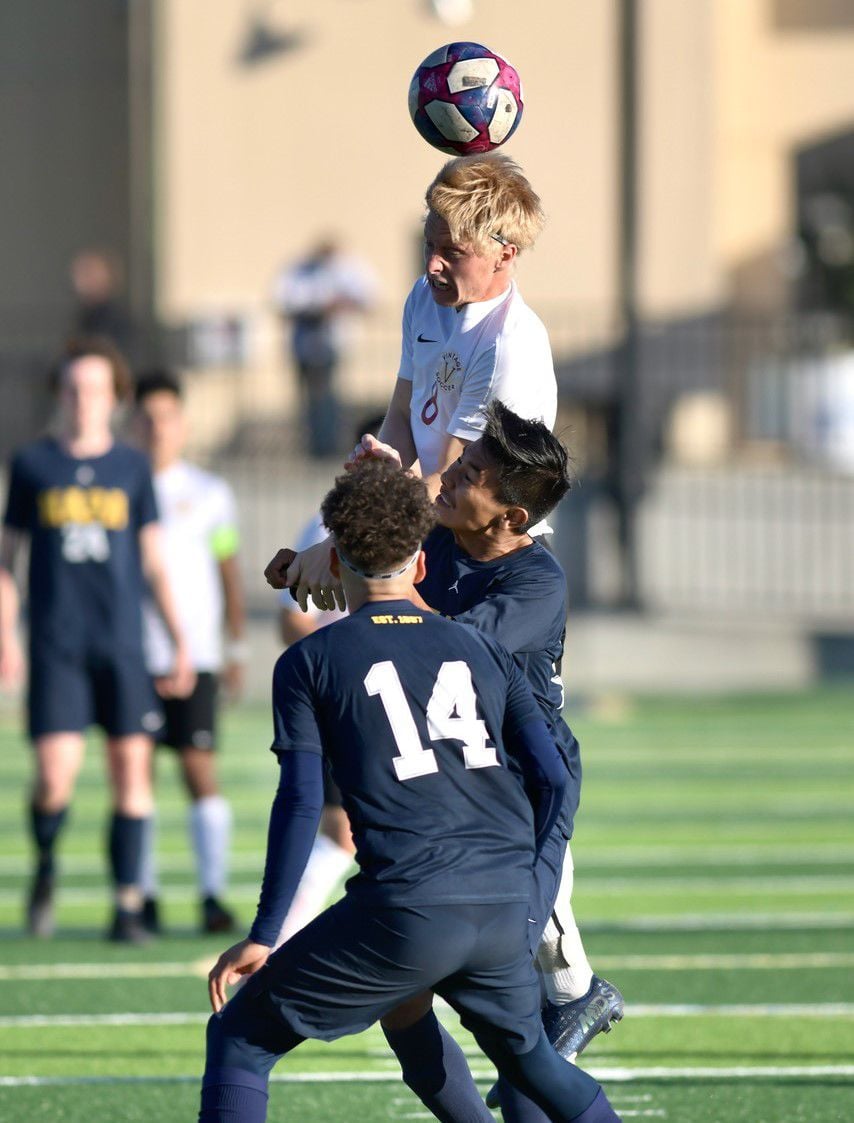 Vintage's Luke Shea goes up for a header over Ulises Cruz (14) and another Napa High player Thursday night at Memorial Stadium. 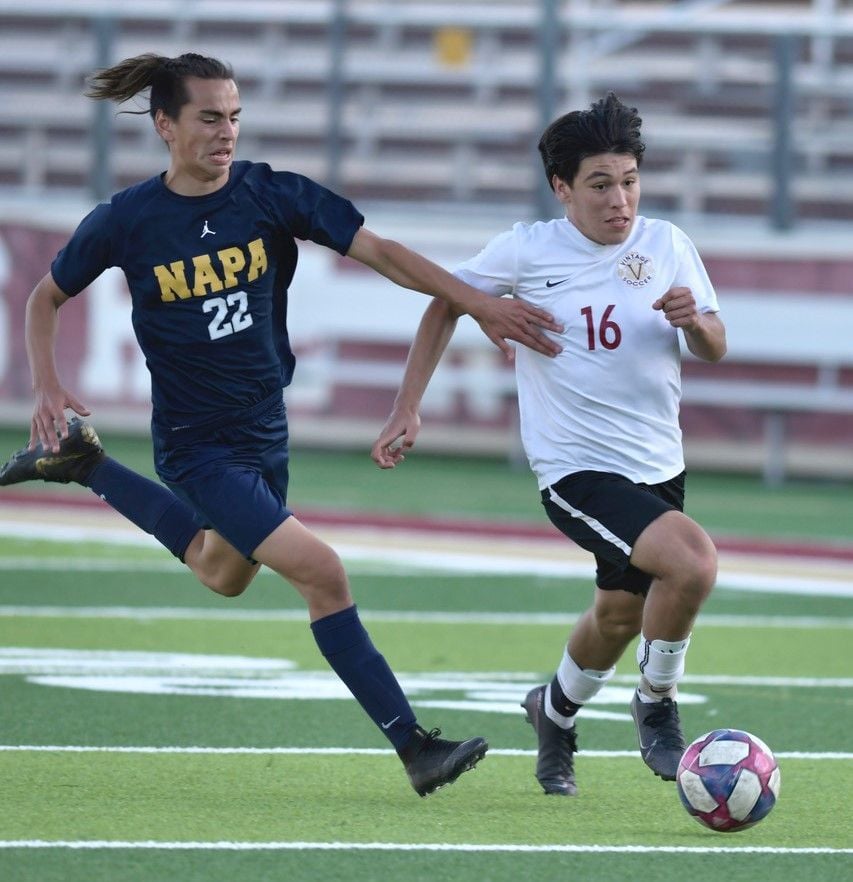 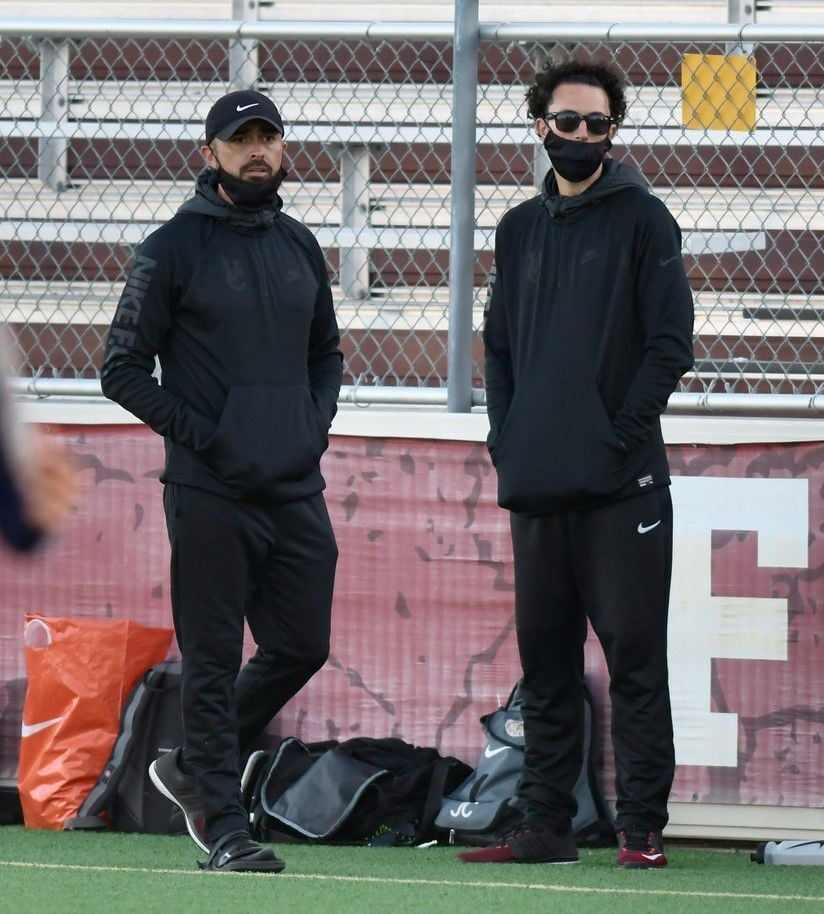 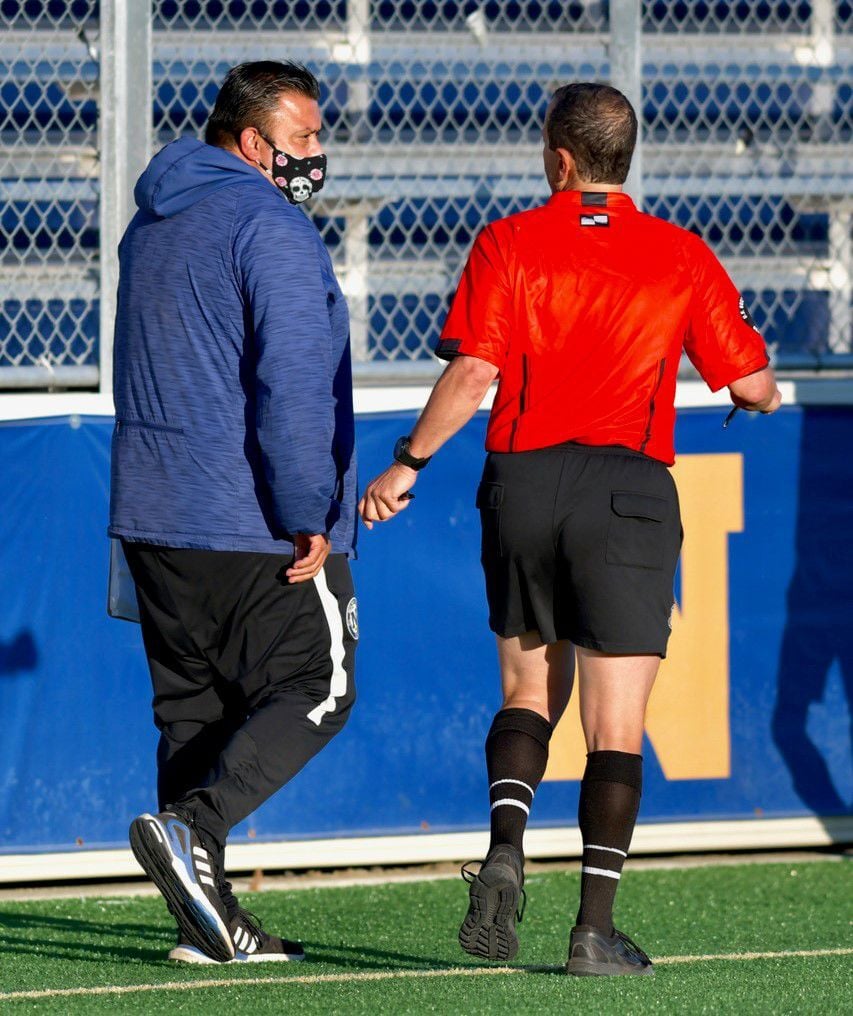 The second meeting of Big Game boys soccer had a little bit of everything at Memorial Stadium on Thursday evening.

In a game that was riveting from start to finish, there was the intensity expected whenever Vine Valley Athletic League rivals Vintage and Napa High meet, there was a high level of overall play, and there was a high-tension goal reversal as Vintage completed a Big Game season sweep with a 2-1 comeback victory.

The Crushers controlled the attacking middle field for most of the contest, with the possession of the ball staying mostly in Napa territory and generally at the feet of Vintage's attackers. This possession control didn’t lead to a plethora of opportunities, however, as the Napa defense — led by senior Salvador Leon, the reigning All-County Defensive Player of the Year — was a tough obstacle to deal with for basically the whole game.

“Their defense is kinda hard because they sit kinda deep,” Vintage’s Emmanuel Duran said. “So, to counter that, we just had to push people forward and touch the ball quicker up front. Then we create opportunities like that to score.”

The Crushers controlled the attack for the first four minutes of the contest while Napa had limited scoring chances, but the Grizzlies were dangerous during those few attacks. The first time this was the case was when, in the fifth minute, Axel Clark was quickly given the ball in open space on a counter attack and the striker drove a hard shot just wide of the right post.

Napa had only eight shots for the game, but four made it on frame.

Even with Vintage’s constant pressure, it was Napa that struck on just the Grizzlies’ second shot on goal. Once again it started with a counter attack as, in the 19th minute, a clearance from Napa’s back line found its way to the feet of Anthony Mora. The team captain raced down the right sideline and was on a fast break, with Clark looking for a cross in the middle. Mora decided to take the shot himself, from just around the right edge of the box, and buried it into the goal past Vintage goalkeeper Tanner Griffin.

The reigning All-County Goalie of the Year said after the game he wasn’t too worried about being behind.

“We always stay pretty composed even when we're down, like we were 1-0 in the beginning,” the senior said. “We always come back and we always have the motivation to keep going and we kept going tonight.”

The Napa lead was short-lived as the Vintage attack finally broke through the Grizzlies’ strong defense in the 39th minute. The Crushers’ Gerardo Perez started a counter attack down the right side of Napa territory and dribbled the ball into the box. The senior sliced through the defense and dropped the ball right to Duran, who punched the ball into the left side of the goal past Castro.

Perez and Duran performed well on both sides of the field through the game, gliding passes back and forth with ease. Vintage had seven shots in the first half, but only two made it near the netminder as the rivals headed into the halftime break tied 1-1.

“I feel a majority of the time we were in their half, but they just capitalized on one of our mistakes,” Perez said. “But I think overall, our team played well and kept the ball under our control.”

The Crushers continued the control of the midfield in the second half and once again put the ball at the feet of Duran and Perez. A clearing ball from the Napa defense was handled by a Vintage midfielder, who quickly launched it across the field to Perez on the left side of the field. Perez’ shot was blocked but not caught by Castro, and Duran pushed the loose ball into the back of the net for the apparent go-ahead goal.

The Crushers celebrated and went back toward midfield for the ensuing kickoff. However, before play resumed, the head referee talked with a linesman and nullified the goal on the count of Vintage being offsides. Vintage players and coaches protested the decision, but after about five minutes of discussion the call stood.

“With our chemistry, we all know how each other plays, so we weren't worried about them calling offsides on the goal because we know we can score another one and just be ahead again,” Griffin said.

Any thought that the frustrating moment would unravel the Crushers was gone 10 minutes later, when Vintage got a go-ahead score that counted.

Having had a lot of set-piece opportunities during the game, the Crushers finally found the back of the net on their eighth corner kick. A corner cross in the 65th minute from the left side crossed over to the far side of the box and found the head of Jason Fuentes. The ball popped into the air and started heading for the back post. As Vintage’s Yahir Escalona tried to kick the ball into the net from mid-air and Napa’s Ulises Cruz attempted to stop it, the ball kept going and crossed the line.

“Everyone was just working tonight, they were working so hard and nothing to take away from Vintage. They did a great job, they always do a good job, Javi does a phenomenal job preparing their students,” Napa coach Rafael Ayala said. “It's an emotional game against Vintage and it can go either way. Again, I appreciate all these kids for giving everything they got to Napa high.”

Napa would have some of its best scoring opportunities in the final 15 minutes of the contest, but the Crushers’ defense held strong and didn’t break under the pressure. Center back Tate Salese made a few heads-up defensive plays in the final five minutes, especially when it came to clearances or passing it back to goalie Griffin.

Vintage improved to 8-0 overall, 7-0 in the VVAL. Napa has lost only to the Crushers this year, including 2-1 on April 22 as well.

Forbes has released its annual ranking of the world’s Top 10 highest-paid athletes. Here’s who made the cut this year. 10. Kevin Durant, Brook…

An airborne Yahir Escalona (11) of Vintage and Napa's Ulises Cruz, behind the net, swat at a corner kick headed by Vintage's Jason Fuentes for the winning goal Thursday night.

Luke Shea (8) and Gabe Cendejas (3) of Vintage and Napa High's Cesar Guzman (16) go up for a header Thursday night at Memorial Stadium.

Vintage's Emmanuel Duran kicks the ball past Napa High's Salvador Leon (22) for an apparent goal, which was nullified, Thursday night at Memorial Stadium.

Vintage's Luke Shea goes up for a header over Ulises Cruz (14) and another Napa High player Thursday night at Memorial Stadium.