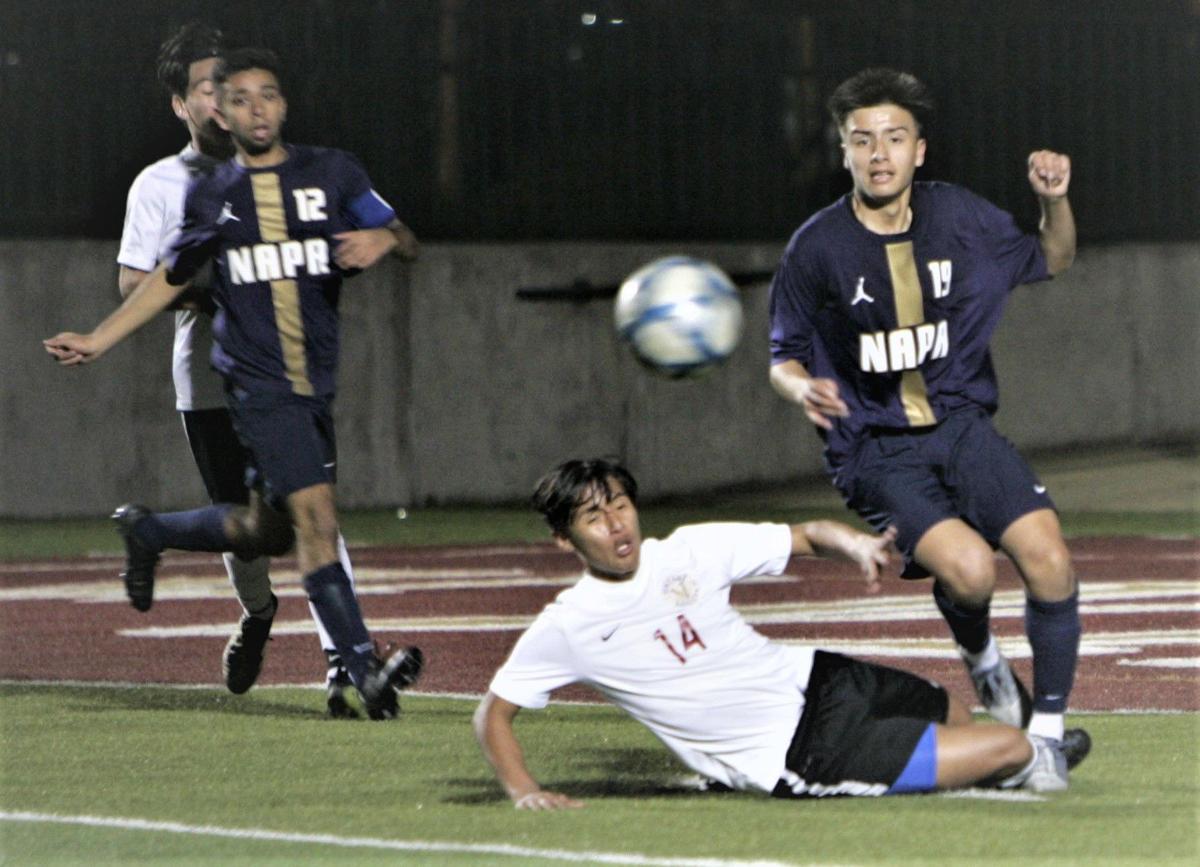 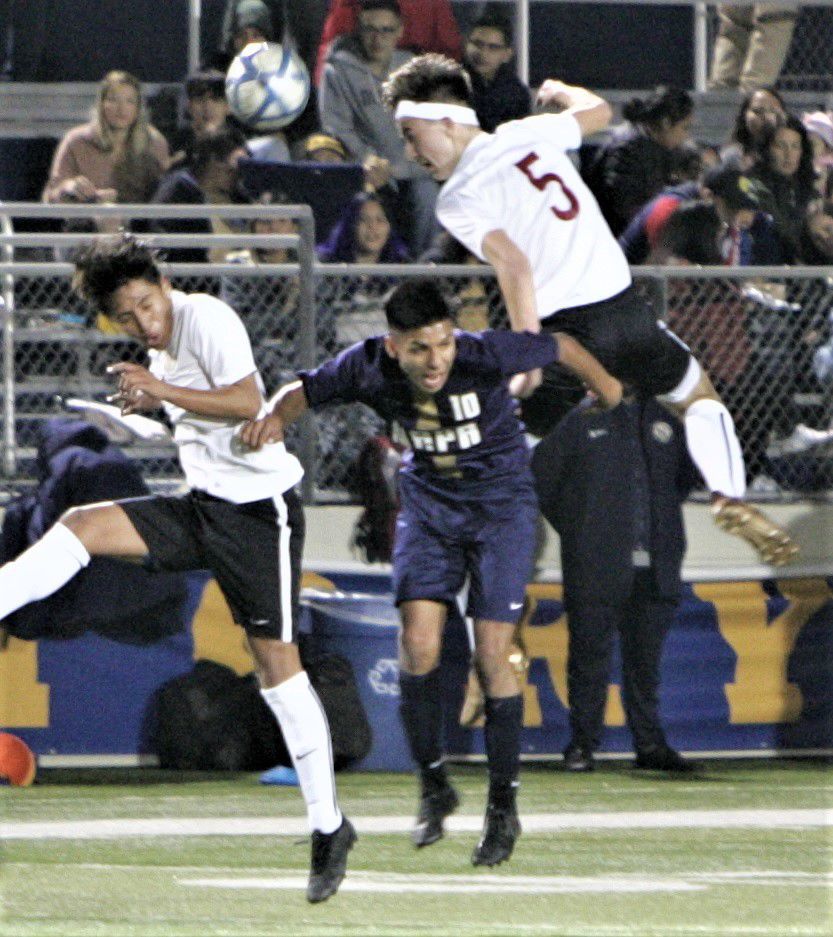 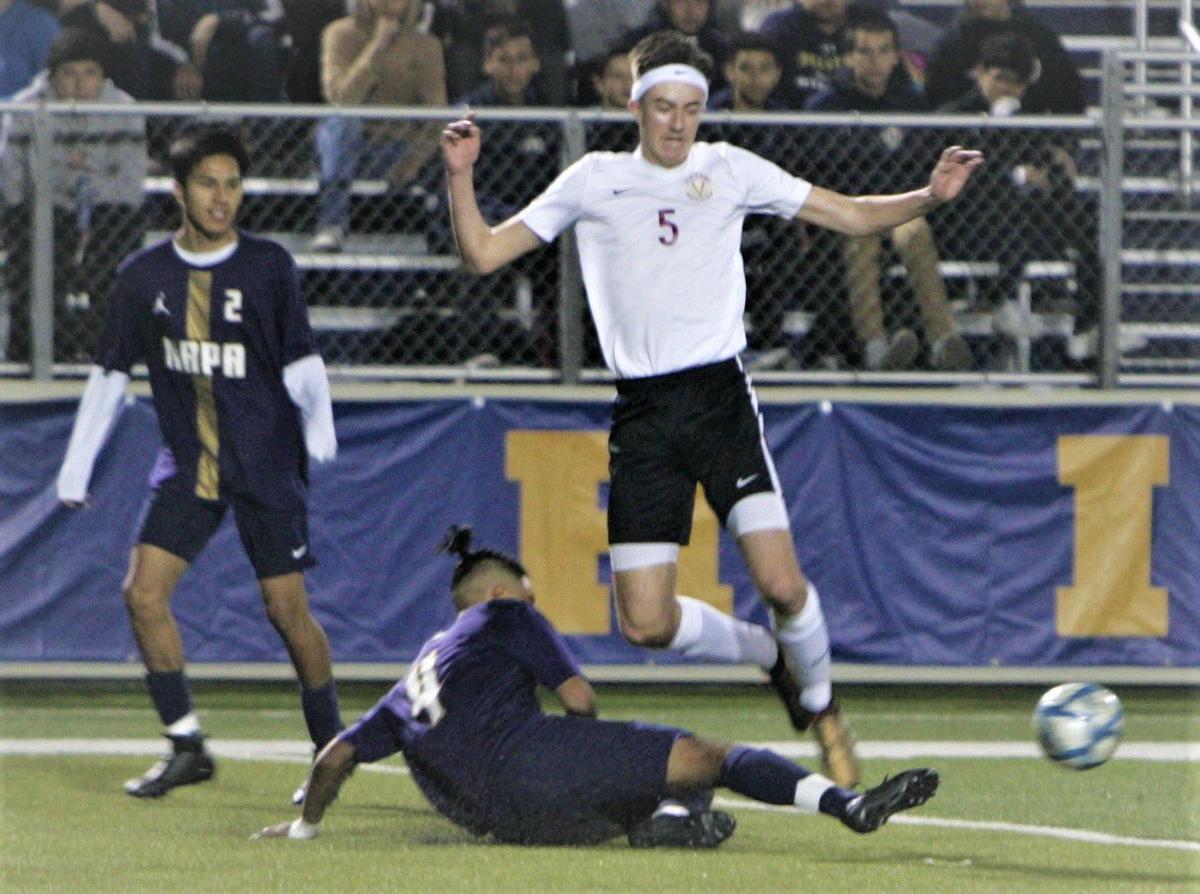 Of all the Vintage High boys soccer players Napa High felt it needed to contain in its second Big Game of the season Thursday night, Ian Reis couldn’t have been one.

The junior is usually a center back, running around in front of his own goalkeeper, not the opposing one. But co-coaches Javier Covarrubias and Alex Feliciano moved him to defensive midfielder, as they sometimes do, and he didn’t have to wait for a set piece to score this time.

He did have to wait until stoppage time, though, after the teams had battled through 40 scoreless minutes in an unusual two-sided Big Game defensive clinic.

On a counter attack, Emmanuel Duran, one of the Crushers’ top scorers, beat his Napa defender in the corner and put a ball into the box. The goalkeeper blocked it, but Reis followed it in.

A few minutes later, after Napa had pummeled junior goalkeeper Tanner Griffin with equalizer shots, a couple he had to save, Vintage had its eighth straight Big Game win, 1-0, at Memorial Stadium.

“Ian was in the right place at the right time and had the composure to finish,” Feliciano said. “He kept it low and kept it down. He was cool as a cucumber.”

It was the first game action in almost two weeks for Reis, whom Feliciano said sustained a “slight concussion” against De La Salle on Jan. 25.

“It’s surprising I scored,” said Reis, who only had a couple goals all season coming in. “But we worked hard and we wanted it better, and things just go your way sometimes. I just got lucky. It hit off a defender and went right to me. I just had to place it.”

But how did he make that look so easy?

“You just can’t think of the fans. You’ve got to play your game and keep your head and that’s it,” he said. “I wanted to make my team proud and win it for the seniors.”

Griffin must have been nervous at the end, after Napa had bounced a shot off his sidepost earlier in the second half.

“He’s amazing, one of the best out here. He deserves all the credit,” Reis said. “He plays amazing every night. He’s a leader for us and we all look up to him.”

It was Griffin’s fifth shutout of the season.

“Any time you can keep a clean sheet and get a shutout is great,” Feliciano said. “He dealt really well with a lot of their services into the box, either coming out to punch them away or grabbing them. He’s not afraid to stick his nose in there and maybe take a hit, and that’s what you love. He’s very, very aggressive and brave. He did his job. He owned his box.

“Credit to our whole team for winning those balls through the air and just scrambling and clearing balls out. It was a total team effort.”

Vintage (14-3, 9-1 VVAL) and Napa (12-7, 8-3 VVAL) are still the class of the league with 18 and 16 points, respectively, and third-place Sonoma Valley with 10. Both should make the playoffs after Vintage visits Sonoma Valley on Tuesday and American Canyon on Thursday, and Napa entertains Petaluma on Tuesday.

“It’s heartbreaking to be on the losing end of a game like that. It’s hanging in the balance and can go either way,” Feliciano said. “You kinda feel for their boys. It’s gut-wrenching. But you could tell at halftime it had the makings of a really tight match. There were a lot of set pieces from both sides, but I feel like they had a few more than we had in the second half.

“Both teams are very skilled. It just comes down to heart and sacrifice and that one chance, who can be the hero and put it away.”

The Crushers improved to 9-0 in the VVAL and 15-0-1 overall with Thursday’s Big Game win.

Sebastian Carbajal assisted on goals by Gustavo Avina and Noel Lopez and Luis Hernandez scored the insurance goal for Vintage.

Vintage answered a late Napa goal to prevail in the first boys soccer Big Game of the season, 2-1, on Thursday night.