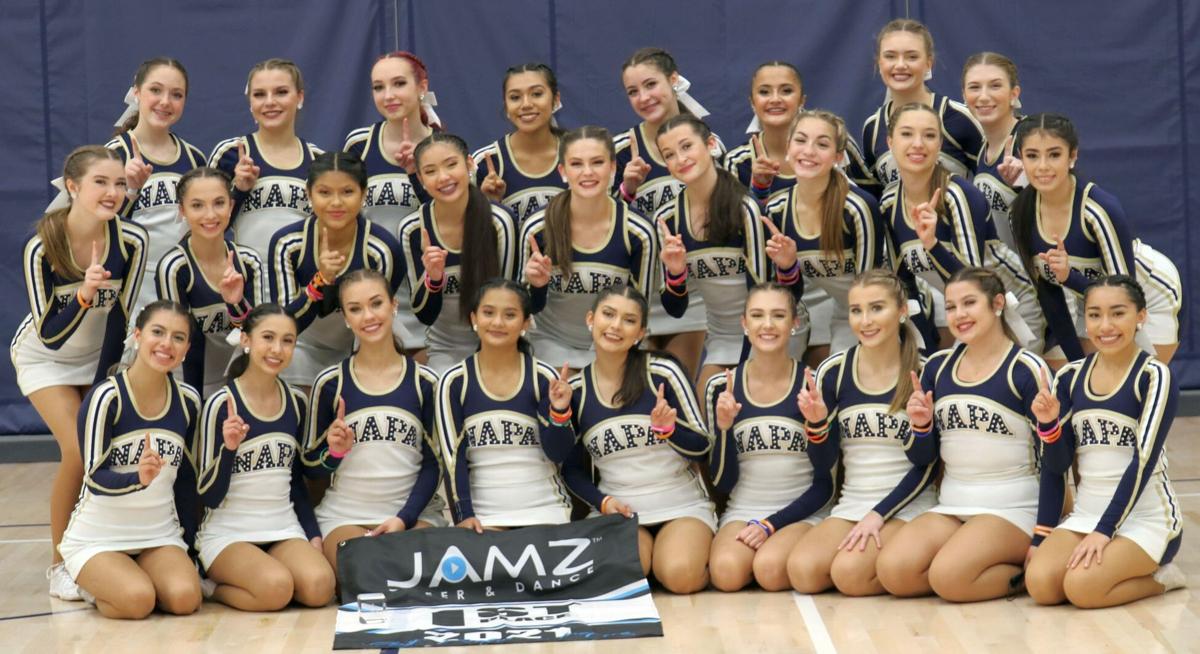 The Napa High School Spiritleaders pose with their first-place banner at the JAMZ “Battle at the Capitol” in Roseville on Saturday. 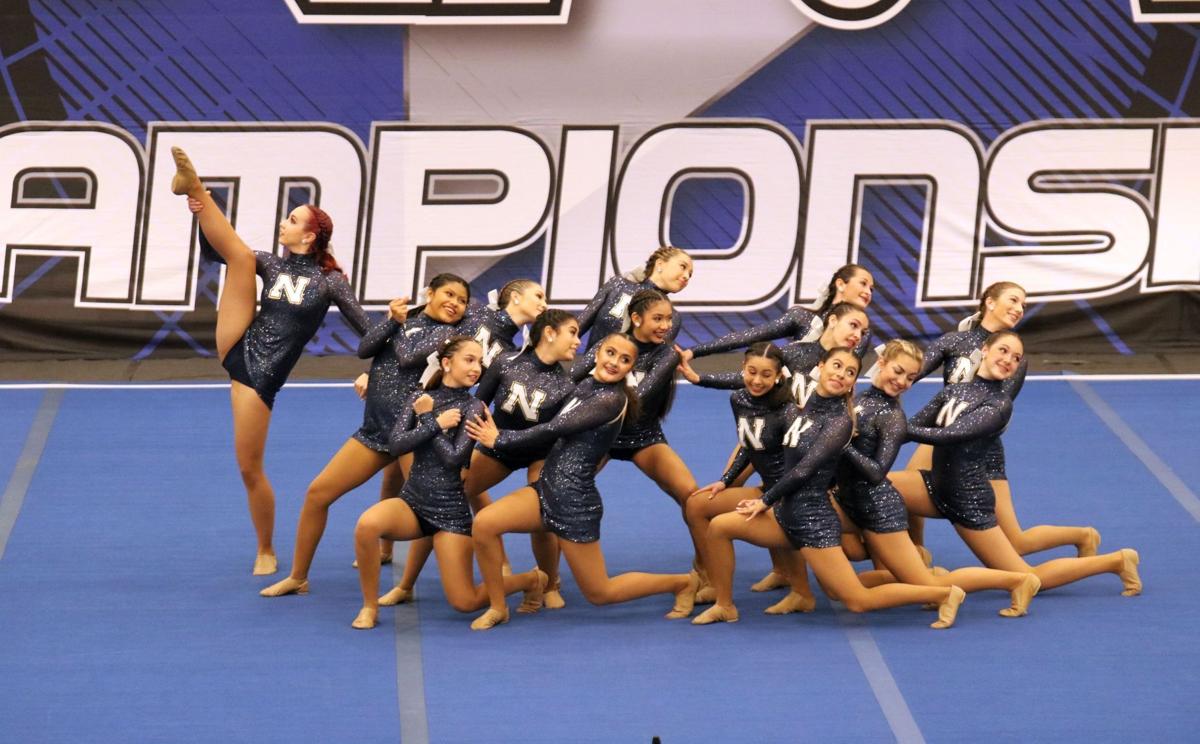 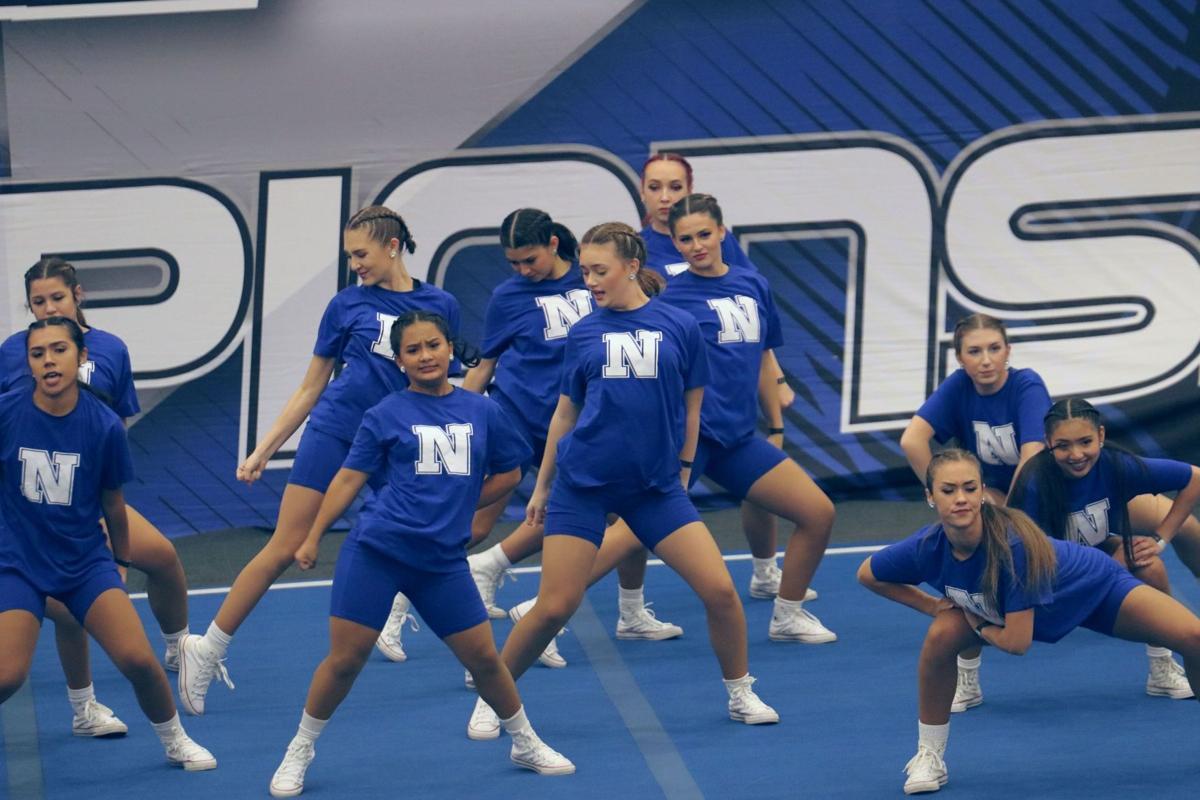 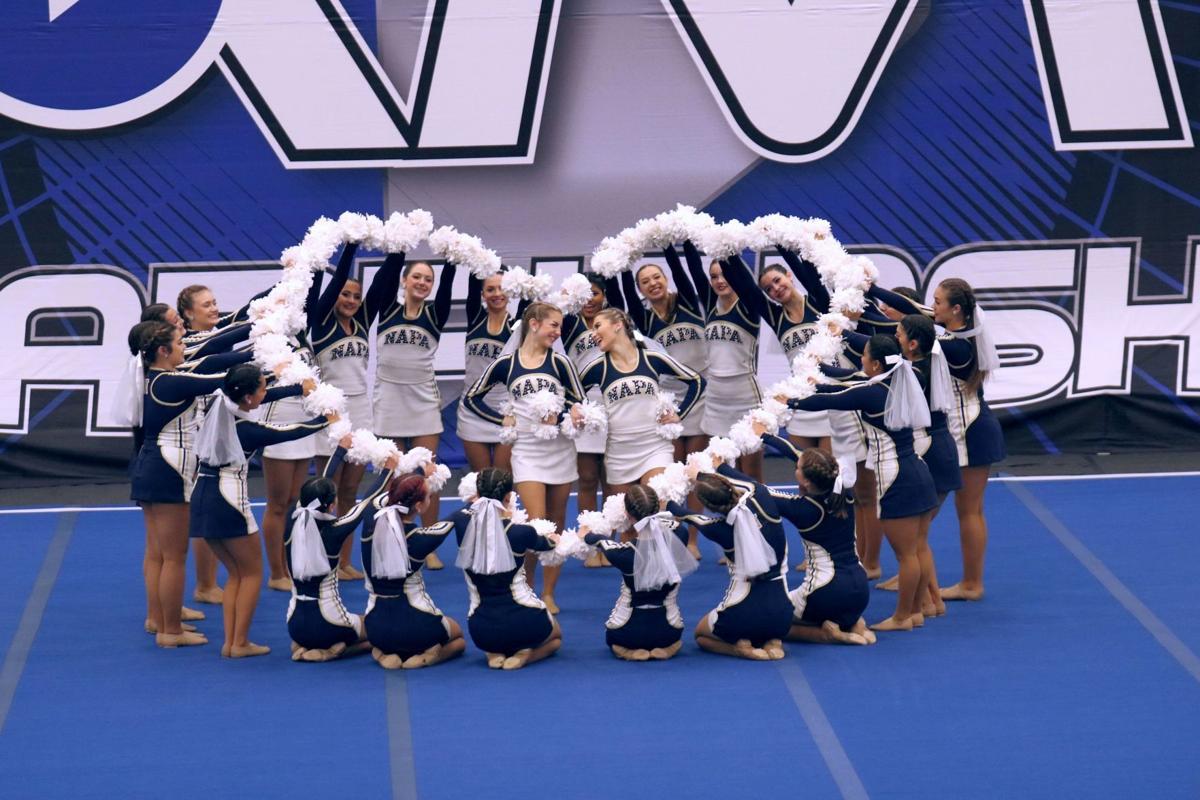 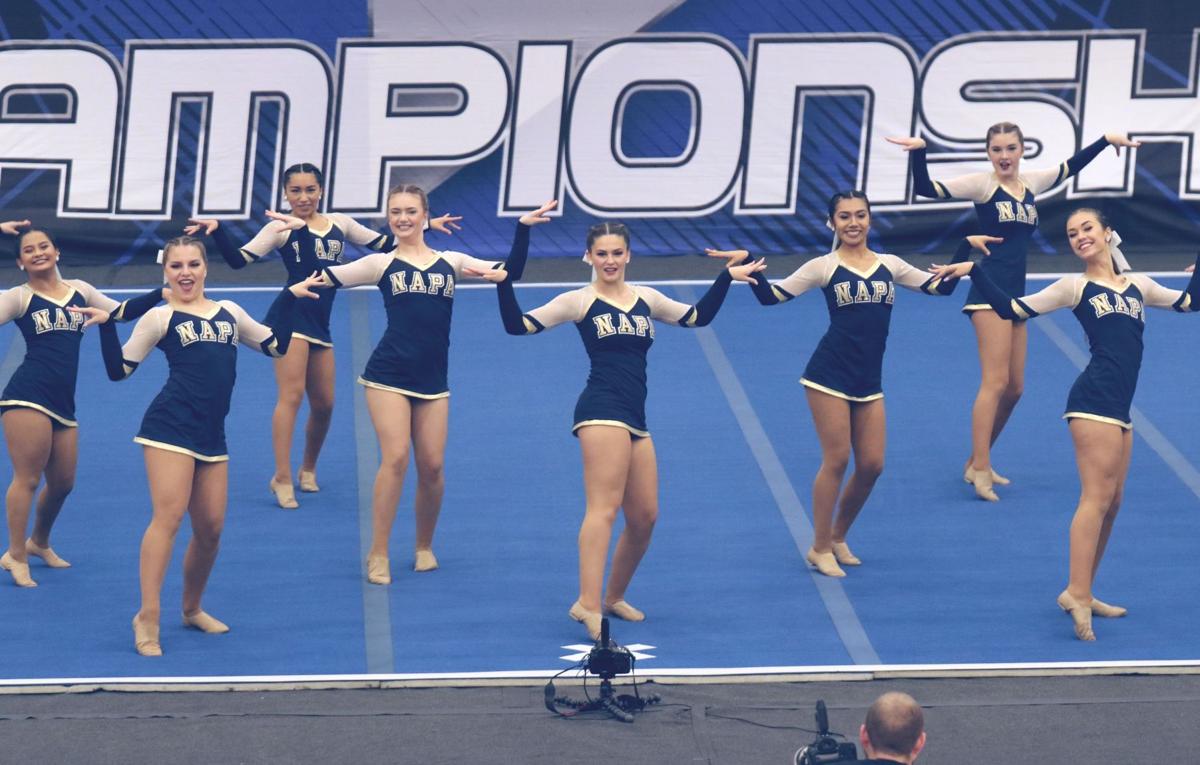 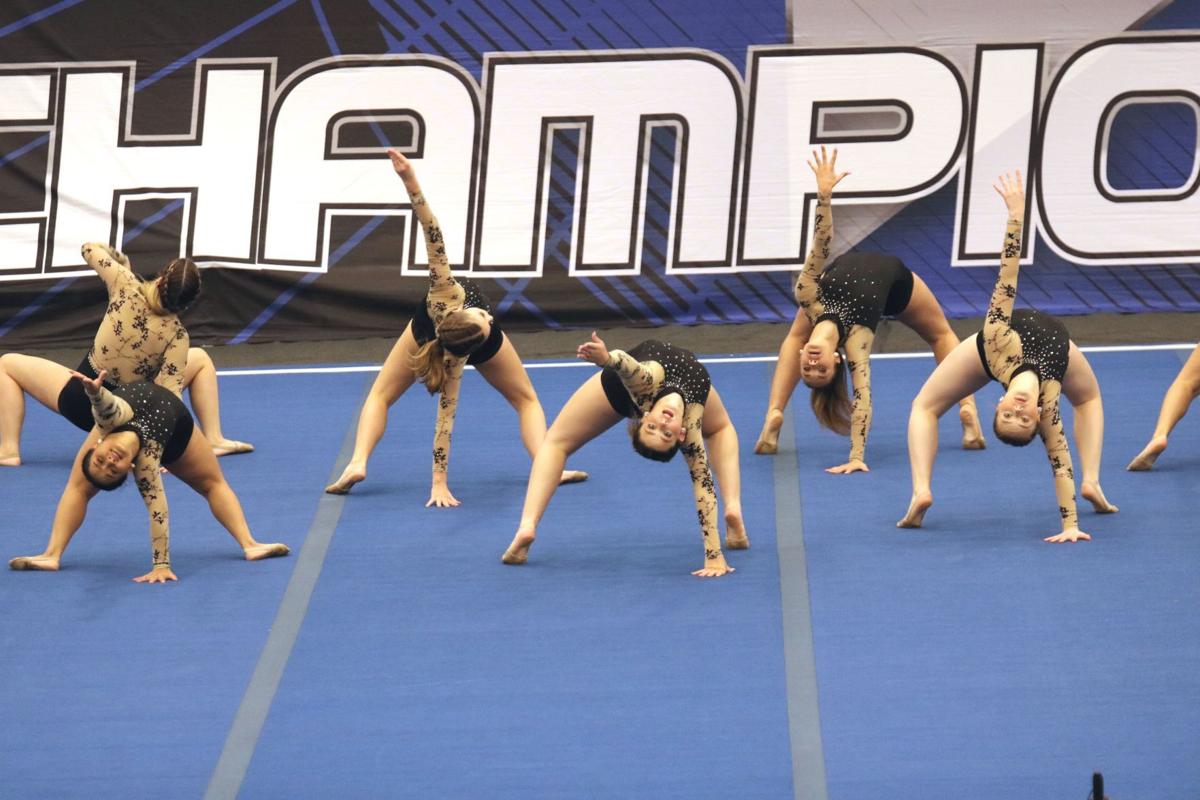 The Napa High School Spiritleaders showed they are among the best cheer and dance squads in Northern California when they participated in the JAMZ “Battle at the Capitol” in Roseville on Saturday.

The Spiritleaders, made up of Blue and Gold teams of ninth- through 12th-graders, provide school spirit at more than 50 games and events per year.

The championship put on by JAMZ Cheer and Dance was held in the Roebbelen Center, which seats 6,000 spectators.

“This huge facility was an exciting venue for my team to perform in,” said Spiritleaders head coach Rylee Pippert, a six-time national dance champion.

The Spiritleaders brought five routines in the advanced varsity divisions — two in jazz, and one each in pom, lyrical, and hip hop.

The team placed first in the pom competition with a wedding-themed routine choreographed by Pippert and performed by both Blue and Gold members, each in a traditional uniform with a wedding veil in her hair.

The Gold team earned second place in the jazz division for its routine set to the song “Proud Mary” by Ike and Tina Turner. It is a fast-paced, upbeat, technical routine choreographed by Alex Blitstein.

The Blue team earned first place in the jazz division with a visual and technical routine choreographed by Pippert and assistant coach Erica Pecho, an instructor at The Dance House Napa Valley.

The Gold team then placed first in the lyrical division with an inspiring “River” routine sung by Bishop Briggs and choreographed by Blitstein. The routine also won the “Most Innovative Choreography” award,

The Blue and Gold teams also placed first in the hip hop division with a school-themed routine choreographed by Pippert and assistant coach Erica Pecho that was a fan favorite.

“It was nice that audience members from other schools and programs enjoyed all of Napa’s routines,” Pecho said.

Both the Blue and Gold teams qualified to attend the JAMZ National Dance Championships in Las Vegas. Napa won the lyrical division the last time it attended that event, bringing its national title total to a staggering 39.

The Spiritleaders have an average team GPA of 3.89, and over half of the team has a 4.0 or above. In addition to competing, they perform at multiple showcases and serve their community. They recently performed at and assisted with the Alzheimer’s Walk in Yountville and are headed next to the Boys and Girls Club of Napa Valley.

Other Spiritleaders assistant coaches are two Spiritleader alumni who are on the San Francisco 49ers dance team, Maddie Spencer and Rachel Remboldt, along with former NDA instructor Lisa Garcia. The director is Hollie Johnson.

The Spiritleaders will perform their award-winning routines during the fifth annual “Day of Dance and Cheer” event, which starts at noon Sunday, Dec. 5, in Napa High’s Messner Gym. Doors open at 11 a.m. Spectators are advised to get there early. Tickets must be purchased online in advance.

Members of high school dance teams and dance studios may attend for free, to help unite the cheer and dance community and kick off the holiday season by spreading joy through dance and cheer. The event is also free to their coaches and teachers, who receive a complimentary lunch.

Admission is $10 for adults, $5 for students, and free for children age 5 and younger. The Spiritleaders always donate a portion of their earnings to a worthy cause such as the North Bay fire victims, Alaina’s Voice Foundation, and the National Down Syndrome Society. This year, they will donate to the Alzheimer’s Association.

The Napa High School Spiritleaders pose with their first-place banner at the JAMZ “Battle at the Capitol” in Roseville on Saturday.