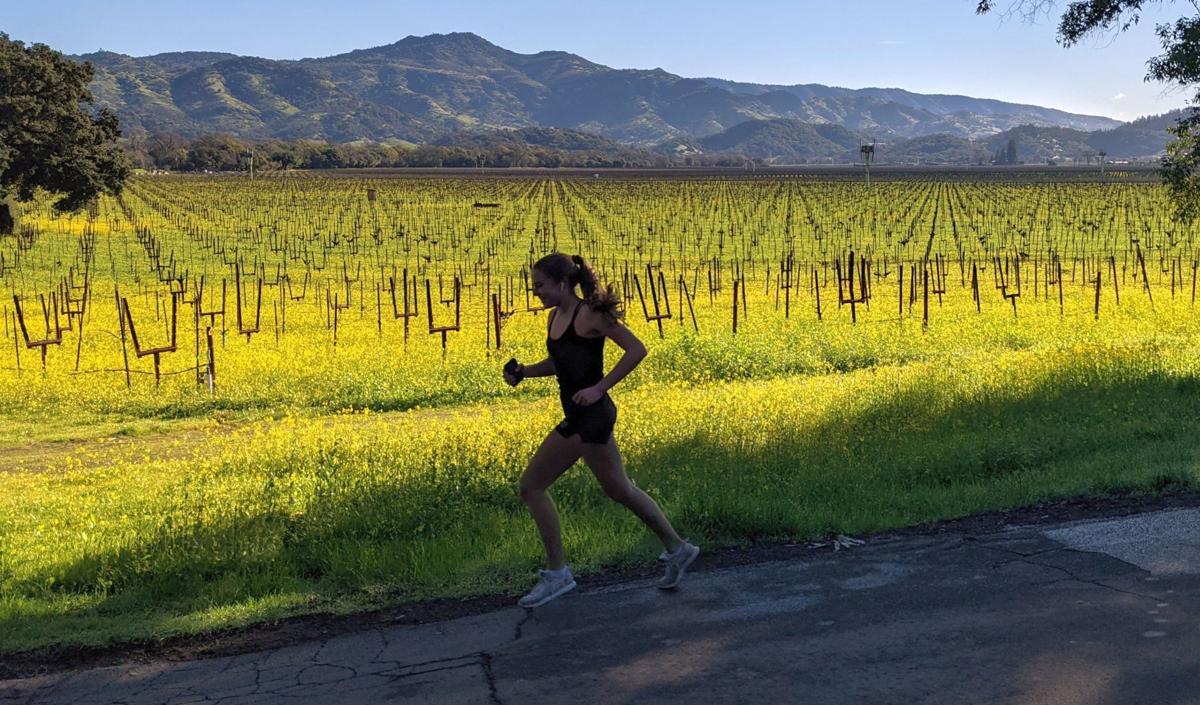 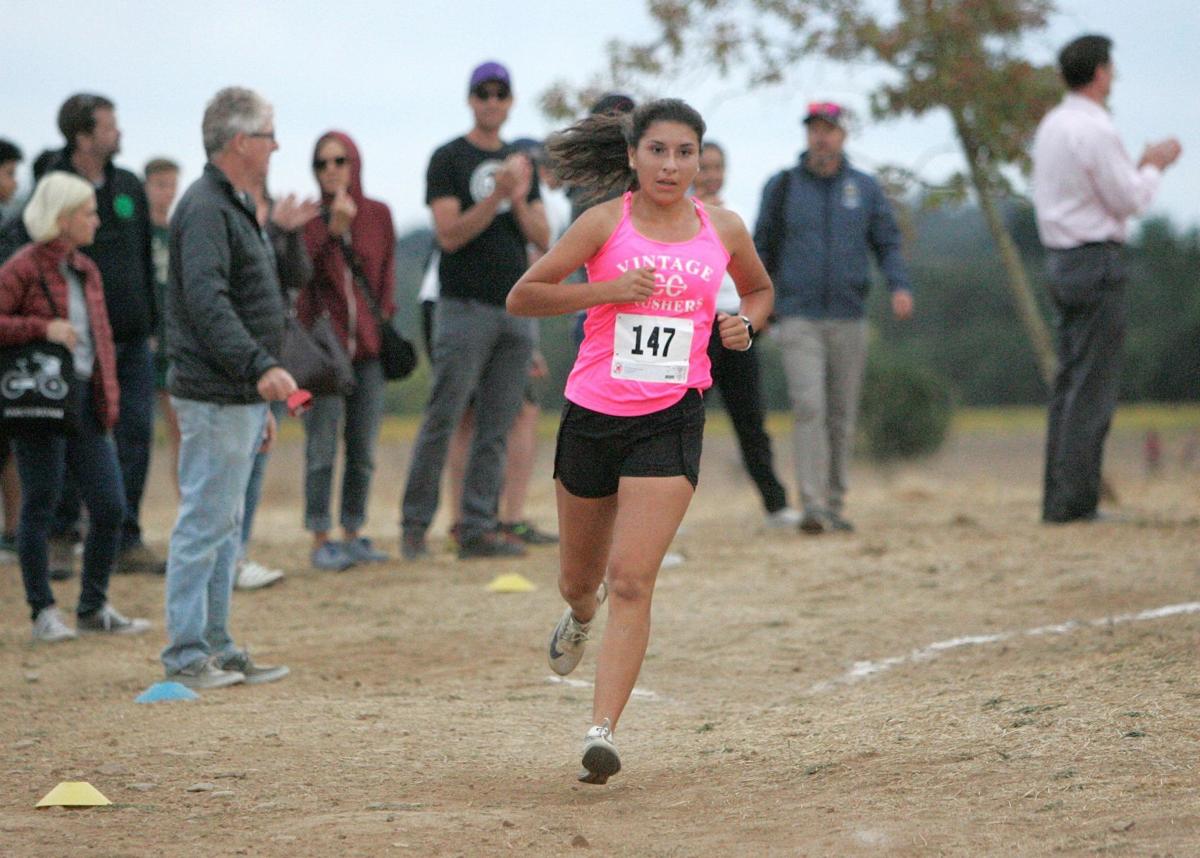 Vintage's Tamara Hernandez competes in a league meet at Alston Park on Oct. 16, 2019.

The Vintage High cross country team has been training since June, grinding out mile after mile in north Napa in hopes of a chance to compete.

The team has handled its fair share of adversity along the way, whether it was rumored starts to the season, virtual training or lagging motivation as the miles clicked away with no formal competition in sight because of the year-long COVID-19 pandemic.

But a late January announcement from the CIF sports medical advisory committee, working with the California Department of Public Health, finally allowed a way for cross country and other low-risk, minimal contact sports to get an early February start to their season. It’s safe to say the 27 Crusher runners and their three coaches smiled a little wider that night.

Coaches Brian Pruyn, Shari Costanzo, and Dave Augustus have 14 girls and 13 boys on the roster for the 2020-21 season, which will feature only Vine Valley Athletic League competition. The CIF and North Coast Section canceled postseason competition for all sports this school year.

The boys finished in the middle of the VVAL pack last season, in the fall of 2019. But they have some very dedicated runners coming back, led by senior Dylan Scott, junior Drew Holloran, and sophomore Collin Durfee.

“The boys team is not short on dedication,” said Augustus. “The 13 of them have been training consistently since last summer. Their attitude has been great. I am very proud of them.”

Liam Alexander, a junior who led the varsity Crushers with an eighth-place finish in last year’s VVAL Championship meet, transferred to Justin-Siena last semester but has transferred back to Vintage. He is currently injured but may join the cross country team later in the season.

“I won’t be surprised if we contend for a top-three finish,” Augustus said. “Running cross country demands a resilient mindset and these boys have proven that they have that. I’m excited to see them compete and get some payoff for their hard work.”

The girls team has a VVAL title to defend and seniors Josephine Borsetto, Mary Deeik and Tamara Hernandez plan to lead the way.

Prior to 2019, the last time the Crushers won a girls cross country league championship was 1977. That fact isn’t lost on Coach Costanzo.

“We had a special group of young ladies that found great joy in distance running,” she said. “I see that same joy in this spring’s group.”

“Cross country is a sport that requires athletes to embrace a certain amount of discomfort and persevere through it,” added Costanzo. “It helps to have team camaraderie and a never-quit culture that permeates throughout the program.”

More than anything, the team is grateful for the opportunity to wear the Vintage uniform this school year. Training and conditioning can start to feel monotonous and lack meaning when there is so much uncertainty about competition. It’s a good bet that same smile that came across their faces back in January will once again be ear to ear when the VVAL dual meets begin.

The Grizzlies are led by the reigning VVAL individual boys champion, David Acuna. The senior was hoping to reach the state meet for the second season in a row, but the CIF and NCS canceled postseason competition for all sports due to the COVID-19 pandemic.

“We are disappointed for David Acuna. He had a real shot at making the state competition again this year,” head coach Derek Moore said. “It’s a real testament to his character that he has been working just as hard during conditioning as he would have under normal circumstances. So while this is a setback for him, his future is still very bright.”

Acuna is the only Napa High runner in the top six at the end of last season who didn’t graduate or opt to not come out for the sport. Also not back are the top four of the five runners who won the VVAL junior varsity boys title in 2019.

“We lost some kids to attrition due to the uncertainty of getting a season in and the length of time we spent conditioning,” Moore said. “A few others left us after CIF ruled that high school athletes in California could not condition for more than one sport at a time.

“Several who remained with us have really improved. Senior Sam Williamson broke the six-minute-mile barrier for the first time a few weeks ago, running a 5:50. We also have several promising freshmen, including Finn McGrath and Sonya Mitchell, who have made the varsity teams.”

“It’s been a long journey to reach the point of having a season,” Moore said. “We have been conditioning three days a week for eight months, with brief interruptions due to Napa County’s COVID orders. Through it all our athletes persevered. We are so proud of them.

“Because of the pandemic, our main focus this year has been on providing a safe environment for our athletes to train. We decided months ago to move our practices to Century Oaks Park and run in Browns Valley so our kids would have an easier time spreading out. We have really enjoyed discovering new running routes. All of that hard work will pay off now that we are starting competition. We think it will be fun to go head-to-head with our league opponents, versus our usual center meets and all of the teams in our league running together.

“We are especially excited for our seniors. They have been deprived of so much because of the pandemic. After graduating, they can carry the memory of running one last season in the Grizzly uniform and making history as the only — and hopefully last — cross country team in school history to compete in spring.”

“We are a small team,” said first-year head coach Clare Graham. “It’s understandable that kids moved on to other sports or just had had enough — we started preseason seven months ago. However those that are still here have shown the grit and perseverance that makes cross country runners a breed of their own. They’ve shown up to Zoom conditioning sessions, stuck with it throughout a long fire season, and turned up for freezing early morning time trials at Alston Park.”

Graham was an assistant under Belinda Halloran, who stepped down after last season.

“It’s been quite the year for Justin-Siena cross country,” Graham said. “I’ll be honest — I really didn’t think we would have any sort of a season, let alone a competitive one, and even though this looks a little different, we are all really excited to get to race this week.

“I have seen our three seniors grow since I started as an assistant coach three years ago. Their work ethic is outstanding and I’m excited to see what the future holds for these talented students. No matter how we perform, I am beyond proud of this team.”

At the 2019 VVAL Championship meet at Spring Lake Park in Santa Rosa, Madrigal placed 18th out of 44 runners in 17:47.44 to lead the Wolves. Hernandez, Loo, Patocchi and McCoy also finished in under 20 minutes.

It’s hard to say that’s how they’ll finish this year considering their finishes in the NCS Division III race at Hayward High that year, when Madrigal (82nd out of 157 runners in 17:30.19) was followed in order by McCoy, Loo, Hernandez and Patocchi, all in under 18:50.

The Justin-Siena girls soccer team snapped a 19-game winless streak in the Vine Valley Athletic League with a 6-1 win over visiting American Canyon.

The county expects to gear up vaccinations starting Thursday after weather-related supply delay.

Vintage's Tamara Hernandez competes in a league meet at Alston Park on Oct. 16, 2019. 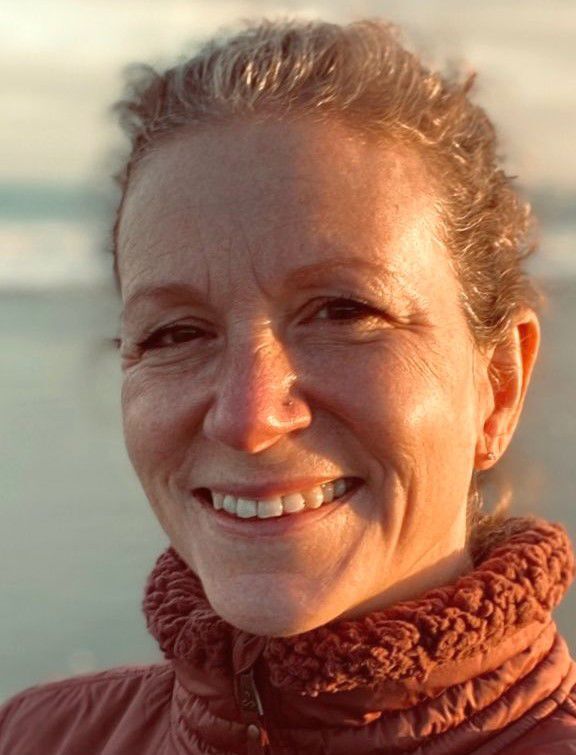