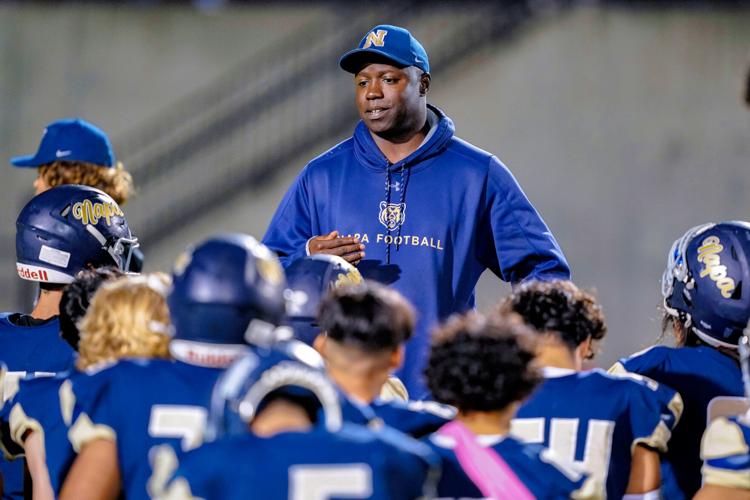 Napa High head coach Askari Adams talks to his team after its loss to Petaluma at Memorial Stadium on Oct. 21. 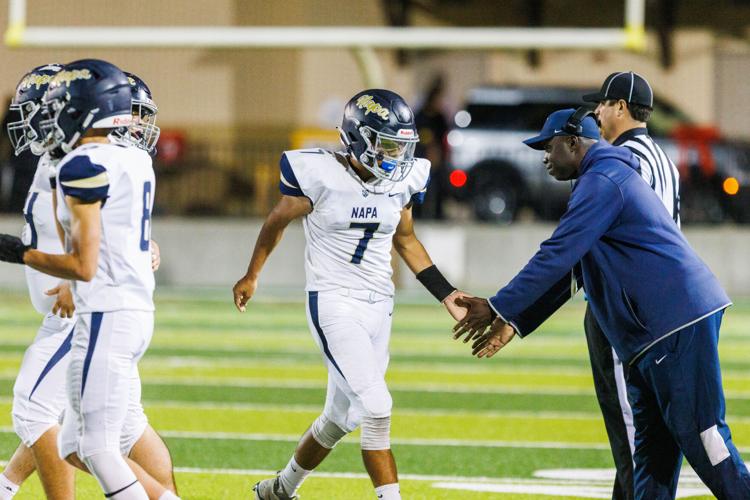 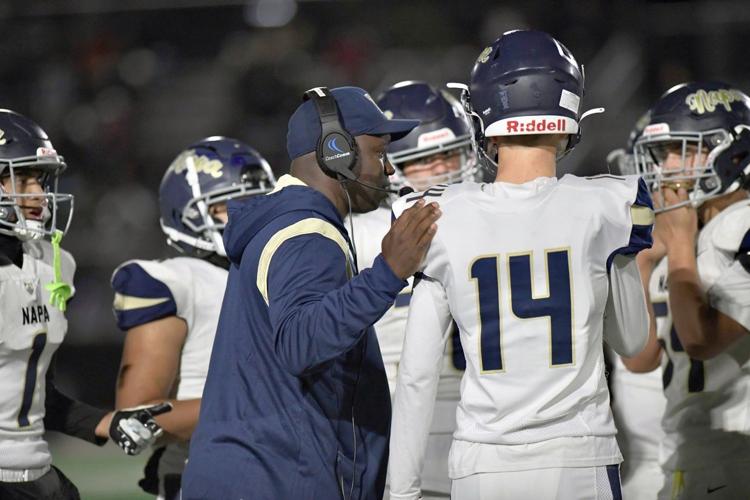 Napa High head coach Askari Adams talks to Graham Smith (14) and other Grizzlies during their season finale at Sonoma Valley on Nov. 4.

The Grizzlies were 7-4 overall and 4-2 in the Vine Valley Athletic League in 2019, when Adams ran the defense under then-head coach Richie Wessman.

Wessman stepped down in spring 2020, during the early months of the COVID-19 pandemic, amid uncertainty over what would happen with the 2020-21 season. Adams took over as interim head coach for the league-only, five-game season that spring, guiding Napa to a 2-3 record.

The Grizzlies went 1-9 last year, winning their season finale over Sonoma Valley to go 1-5 in the VVAL, and were 2-8 this year with two preseason wins.

Athletic Director Darci Ward emailed the following statement to the Register last week after being asked for comment:

“On, November 16, 2022, Coach Askari Adams stepped down from his position as the Napa High School Varsity Head Football Coach. I would like to thank Coach Adams for his contributions to the Napa High School Football Program. He stepped in as the interim head coach in the middle of COVID and continued to lead this program, creating stability during a time of tremendous uncertainty. We are grateful for all of Coach Adam’s contributions to our program.

“Effective immediately, Napa High School will engage in an extensive recruitment process that includes input from our student-athletes, families, and staff.”

“Me and the administration saw the program going in different directions,” he said. “My plan is to stay here (at Napa High) and continue teaching. Depending on if I decide to coach again next year, I’ll be going to the school I coach at (to also teach).”

His career began as a defensive position coach at two NCAA Division II colleges in Pennsylvania. After that he coached at eight high schools — one in Maryland, two in Florida, one in his native New Jersey, one in Pennsylvania, another two in Florida — one of which made him head coach for the first time — before coaching in Denver for two years.

Adams was moved by the large turnout of football players who showed up to hear him announce his resignation.

“The kids have worked their asses off,” he said. “They were eager to learn, and I thought they improved every year. I’m going to miss being around them. Hopefully whoever they bring in, the community will welcome them like they did me.

“I might not be moving out of the community, but the kids and the friendships I’ve made and the way this community accepted me as been unbelievable.”

He was asked what the biggest challenge was of his four years with the program.

“I don’t know if it was a challenge, but we had to get the excitement back in the program,” he said. “That’s happened every year since I took over. We had more and more kids each year. This year we had teams at all three levels for the first time (including freshmen for the first time since 2017). We had less than 50 kids in the whole program when I got here, and we had 80 this year.

“It’s like I told everyone when I got the job: it’s not going to happen overnight. It might not happen in two or three years, or four years. When it’s gonna happen, it’s gonna happen. The first part is getting kids (to come) out and we did at all three levels. We also went from having seven coaches to having 15 coaches. The program was getting known. There were a lot of things I didn’t like about it, but there were a lot of things I did like.”

Adams said he and his staff didn’t need to motivate this year’s team, which played with passion and always tried to make plays whether the game was close or not.

“That’s one of the things you can tell about the growth of a program, having kids like that,” Adams said. “You look at the Rodriguez game (a 53-0 loss in Fairfield). We had a running clock and our kids played their butts off and never quit. When you get to that point, they’re going to start playing (hard) all four quarters instead of two. But we had some young kids in some key spots, some of them first-year players, and they were going to get it eventually.

“It hurts not to be able to watch their growth next year. They’re definitely headed in an upward direction as a program.”

In 1981, Alabama’s Paul “Bear” Bryant becomes the winningest coach in college football history when the Tide beats Auburn 28-17 in the Iron Bo…

Napa High head coach Askari Adams talks to his team after its loss to Petaluma at Memorial Stadium on Oct. 21.

Napa High head coach Askari Adams talks to Graham Smith (14) and other Grizzlies during their season finale at Sonoma Valley on Nov. 4.