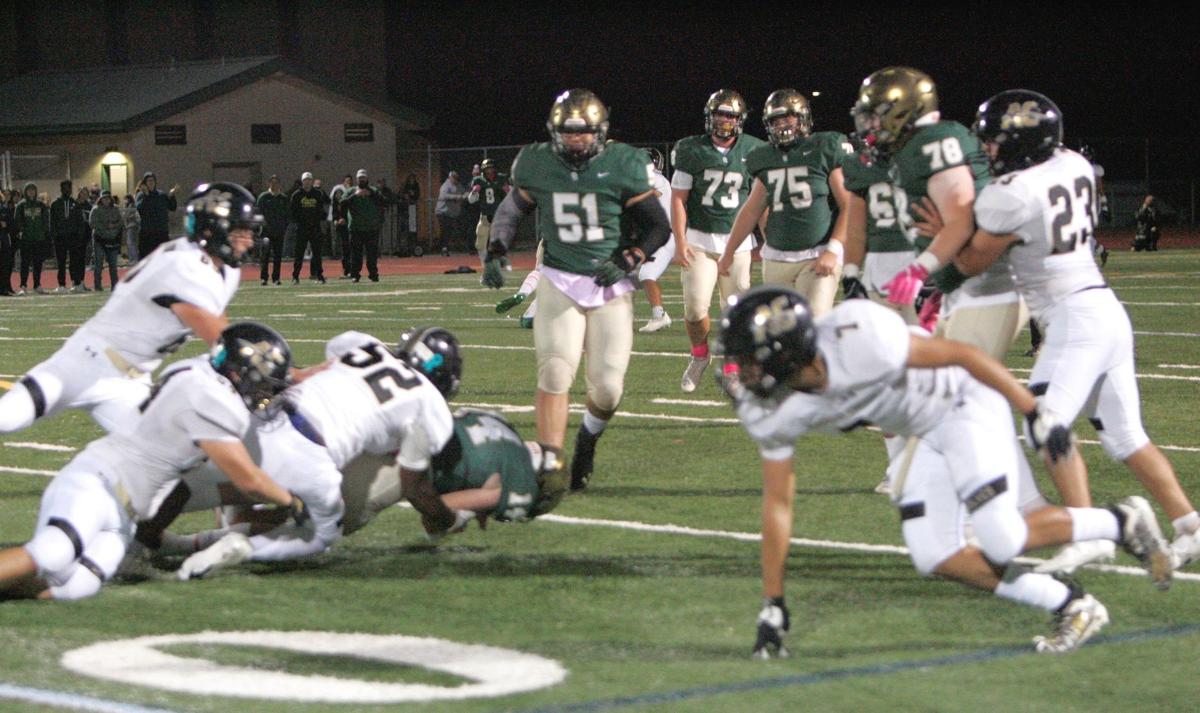 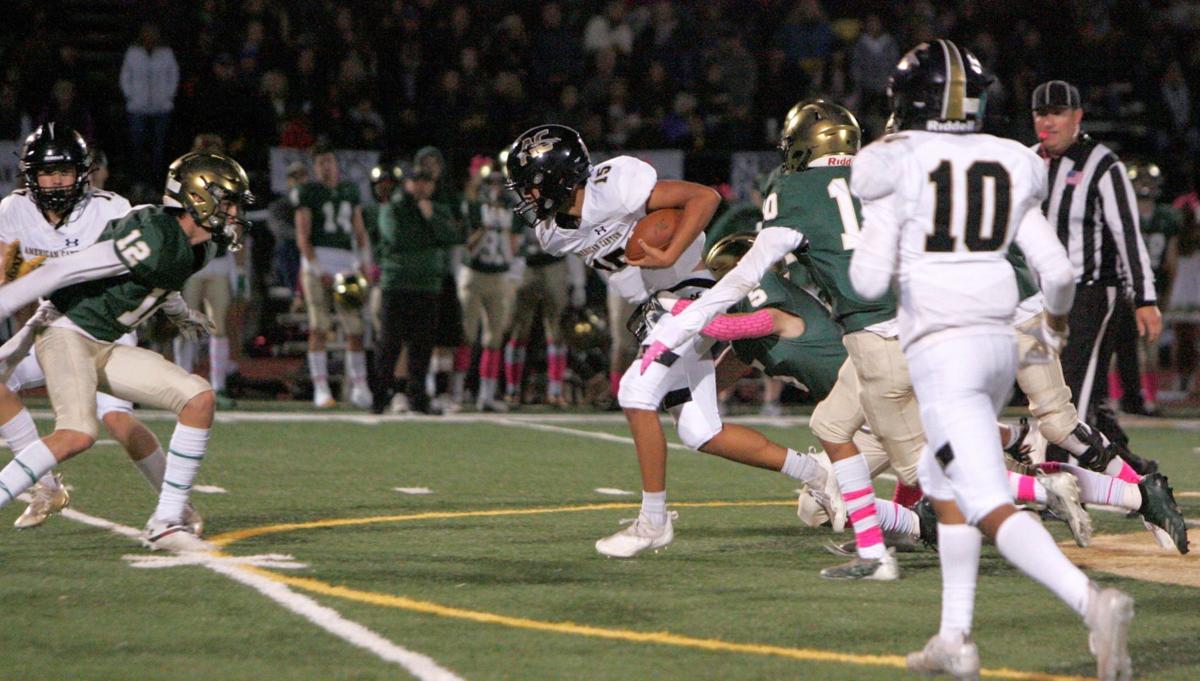 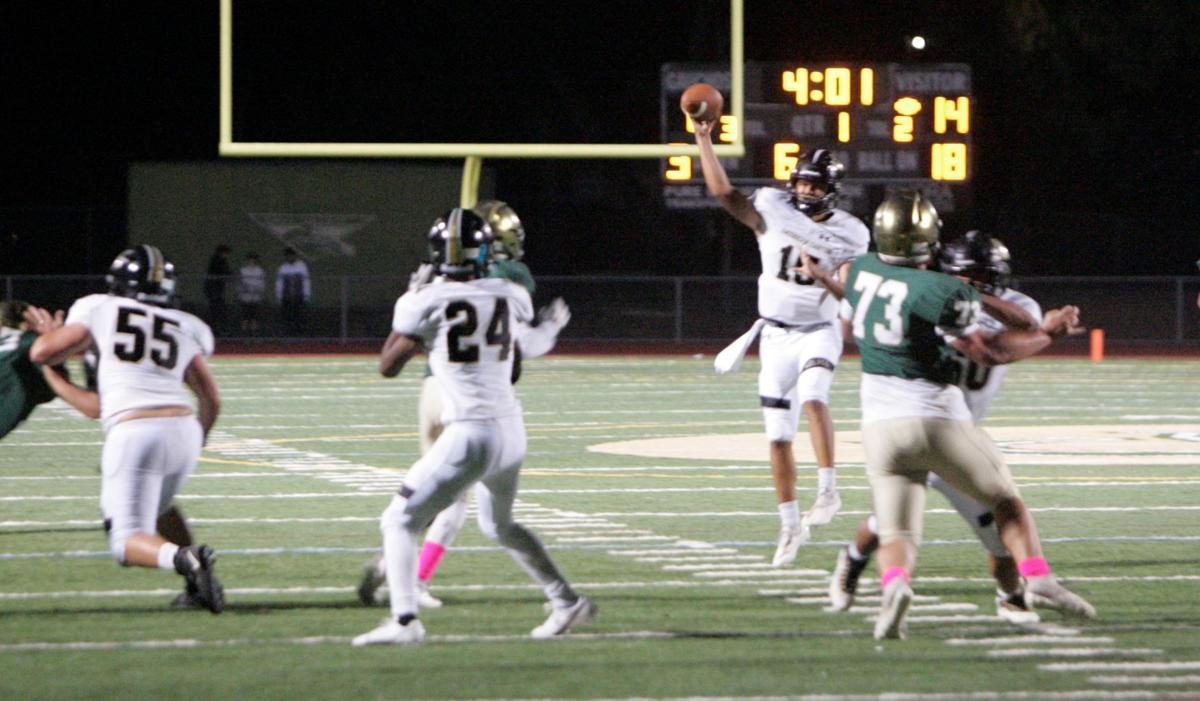 But on the field Friday night, Team A did what Team C was supposed to do.

Wolves head coach John Montante got a water cooler dumped on him after the victory — an early present for the coach, whose birthday is on Sunday.

"I'm so proud of them," he said. "They've gotten better every single week. There were some distractions on campus this week, so this was such a great experience for them. I'm speechless. Everybody had a hand in it, every facet played well when they needed to. The offensive line really stepped up."

"We knew they could score. John (Antonio, Gauchos head coach) is a good coach and they've got a good staff. They've been building a good thing here. But our kids came and played really, really hard and executed when they needed to."

The win vaulted the Wolves (5-3 overall) into a first-place tie atop the league with Vintage, Casa Grande and Petaluma. All are now 3-1 in the VVAL except Vintage, which is 4-1 but has a bye after next week’s Big Game 50 against Napa.

The game began as perhaps expected with the Gauchos (5-3 overall) getting the opening kickoff and scoring three plays later on a 57-yard pass from Jacob Porteous to the most athletic of his many talented targets, Marcus Scott. The 6-foot-4 Porteous, the returning starter who transferred from St. Vincent de Paul after two years as its starter, has been petrifying opponents since throwing for a North Coast Section-record 647 yards in the Gauchos’ season-opening win over Maria Carrillo.

What would have been demoralizing for so many of Casa Grande’s opponents this season was nothing of the sort for American Canyon.

Ryan Landaverde sacked Porteous on the conversion-pass attempt, Sean Yumang returned the ensuing kickoff 85 yards for a touchdown, and Noel Angel threaded the extra point for a 7-6 Wolves lead just 80 seconds into the contest.

The first thing Yumang yelled when he came to the sideline was "Great blocking!"

Asked about it afterward, he said "I can't do nothing without my blockers. I love them boys. If I could, I'd treat them to a steak dinner."

Yumang said it helped that the Wolves had two weeks to prepare because of last week's bye.

"We knew what we could do, we knew what they could do. We just had to step up and keep fighting," he said. "We definitely played together tonight, everybody. That's what we were saying in the locker room (before the game), 'We need all hands on deck tonight,' and everybody came to play. This is what happens when everybody comes to play."

American Canyon’s next hero was Elijah de Vera. Four plays after the Gauchos started their next possession at the Wolves’ 49-yard line, the junior picked off a Porteous pass and returned the interception to the Gauchos’ 46.

Then it was the offense’s turn.

After juking runs of 12 and 6 yards by Kamel Jones, Anderson made a vexing fake and scampered to the 8 to set up lineman-turned running back James Aken’s 1-yard scoring burst for a 14-6 lead.

The American Canyon defense forced a three-and-out, as David Garcia and other pass rushers continued to hurry Porteous, and punted to midfield.

"Coach Rick is just a really smart guy," he said. "He just knows football and he always comes up with a good plan every week. He's a great defensive coordinator."

Garcia said it still took some guts to battle the Gauchos' massive linemen.

"I'm only 180 (pounds) and those guys are 230-plus," he said. "But honestly, I'm surprised because we didn't have enough (players) show up in our bye week. The coaches were mad at us because we were slacking, but we all showed up tonight, did our thing and look where we're at now. We won. It was hard work."

Aided by a roughing-the-passer penalty tacked onto a 19-yard catch by Kamel Jones, the Wolves scored in seven plays as quarterback Kaleb Anderson completed a screen pass that D’Juan Seymore turned into a 22-yard touchdown and 20-6 lead.

Casa Grande took up most of rest of the quarter with a 10-play series that ended with Porteous throwing three straight incompletions, with Jelani Jones making a good play on one and another getting tipped at the line.

After both teams punted, American Canyon overcame a holding penalty on a nine-play, 58-yard scoring drive fueled by Trenton Angold’s two catches for 29 yards. Aken iced it with another 1-yard scoring plunge, this time on fourth down. Angel, who had opened the drive with a 5-yard catch, hit his third extra point for 27-6 lead.

Casa Grande capitalized on a third-down defensive holding penalty on its next series. Porteous completed four passes for 46 yards, including a 10-yard scoring strike to Scott that made it 27-14 with 2:17 left in the half.

After a Gauchos interception was nullified by a personal foul and Anderson found Yumang on a 35-yard pass to the 27, a 32-yard Angel field goal attempt with 1.2 seconds left was deflected and fell short.

Casa Grande grabbed the second-half momentum by getting a touchback on the kickoff, recovering a fumble at the Wolves’ 16 on the first play from scrimmage, and getting a 16-yard touchdown catch from Scott on fourth down.

Its lead trimmed to 27-22, American Canyon fed the trusty Kamel Jones four straight times and he broke a tackle for a 29-yard gain to the 10. That set up Anderson’s 3-yard touchdown keeper for a 34-22 lead.

A three-and-out kept the Gauchos from responding, as Garcia sacked Porteous on first down and his tallest receiver, 6-foot-4 Shane Runyeon, was hit hard and well short on a third-down catch.

Three plays later, Anderson found the speedy Yumang for a 60-yard touchdown pass and 41-22 lead late in the third quarter.

"It was honestly a broken play," Yumang said. "I just sat down in the middle, he found me and I just took off. Me and Kaleb have been playing since we were 5, 6 years old, so we've got that connection. We're on the same page.

"We always meant to (pass more), but the games went how they went. We've still got running backs like DJ (Seymore) and Mel (Kamel Jones) and they went crazy tonight."

Porteous took matters into his own hands on Casa Grande’s next drive, diving over the goal line at the end of an 11-yard keeper to make it 41-30.

Hungry to get back into first place, the Wolves devoured 10½ minutes of clock with a marathon, 17-play, 85-yard scoring march that ended with Kamel Jones taking the snap in a Wildcat formation and following pulling left tackle Nicholas Mitchell and Aken into the end zone with 2:35 left.

Tobyn Bunch, Orin Stockford-Reid, Felix Llamas, Ren Ducut, George Konoval and Landaverde handled most of the offensive line work and did so impeccably.

Casa Grande put in backup junior quarterback Wyatt Abramson, who bounced back from a loss on a mishandled snap to complete a 64-yard pass to Robert Almond III to the American Canyon 10. After a defensive pass interference call moved the ball to the 5, Runyeon was hit hard on a catch and coughed up the ball. American Canyon recovered it at the 2 and ran out the clock.

The Wolves host Justin-Siena, which had a bye this week, this Friday before welcoming Petaluma the follow week.

"Justin's no slouch and Petaluma's doing a good job this year," Montante said. "But this is a great win and we're going to enjoy it for now."