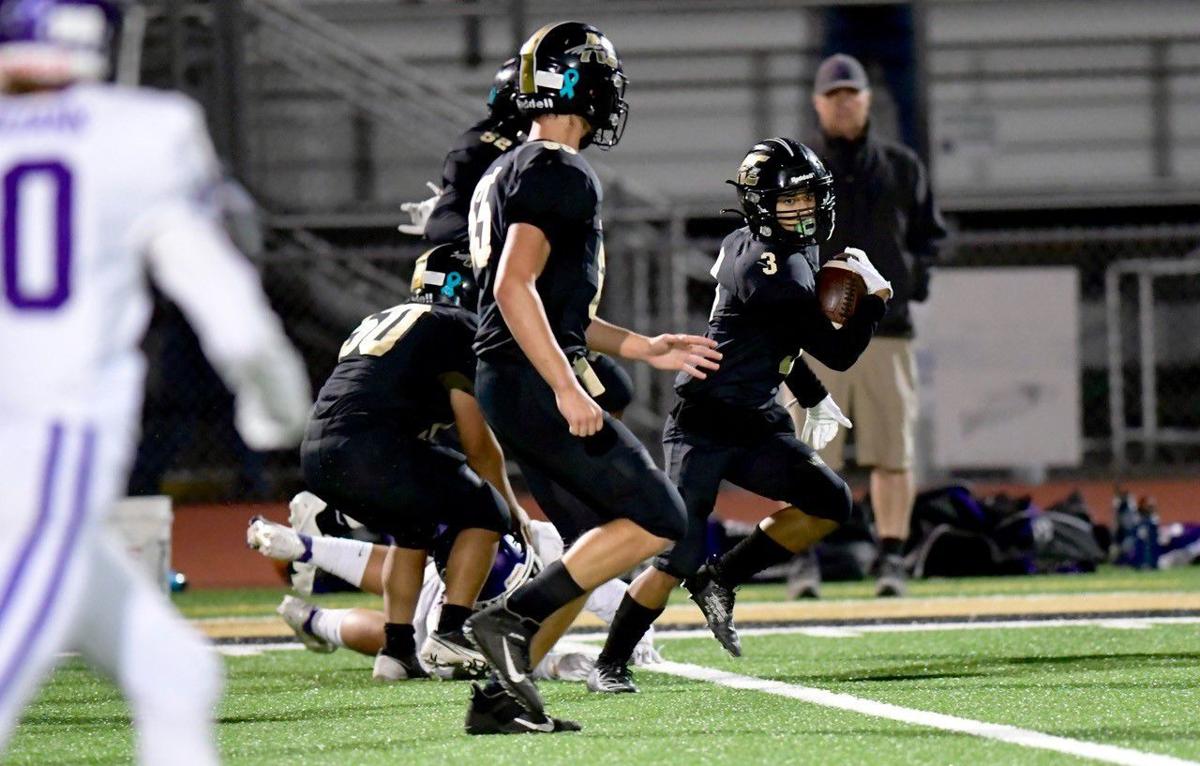 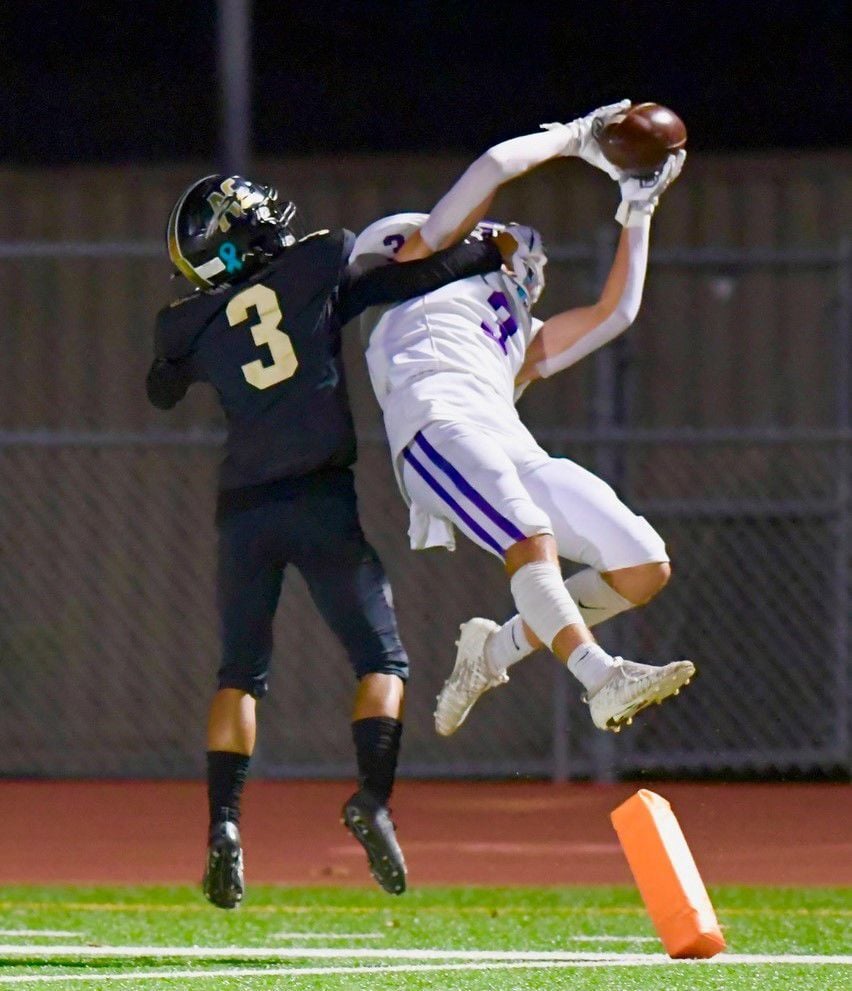 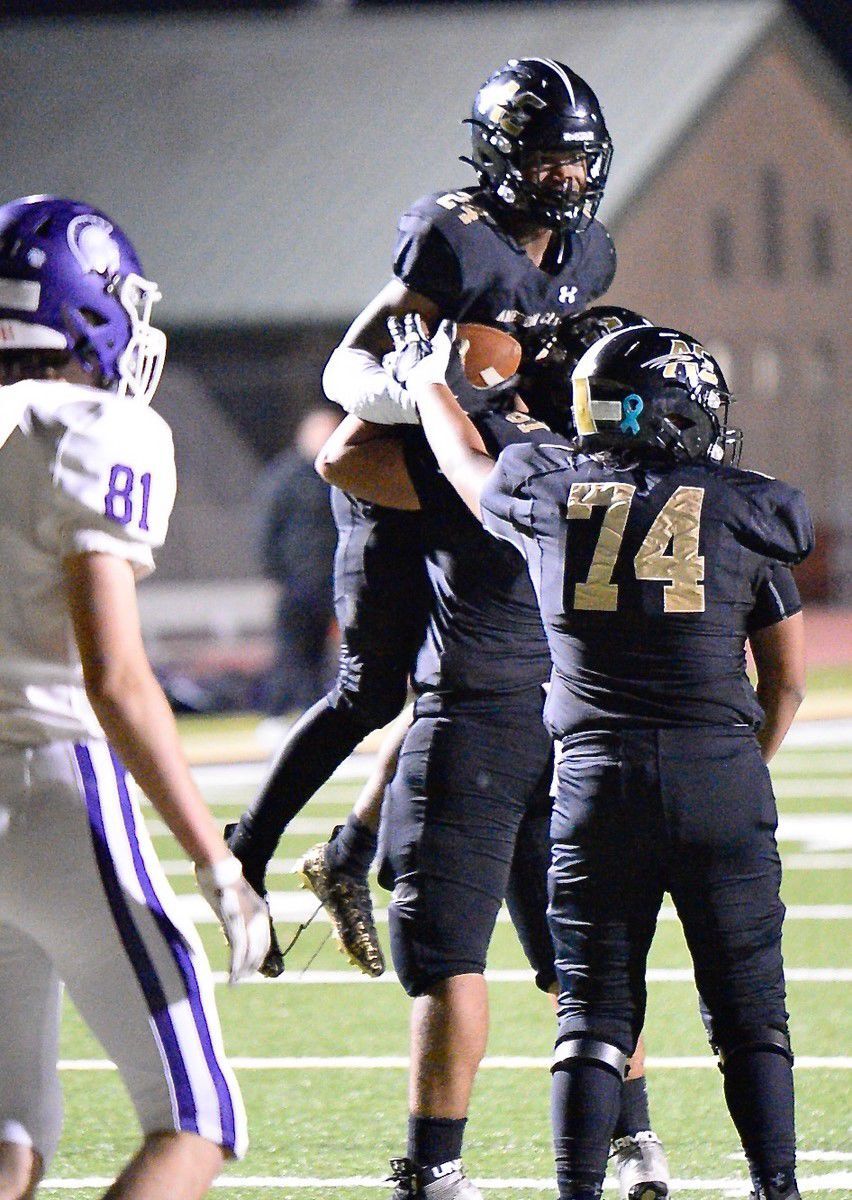 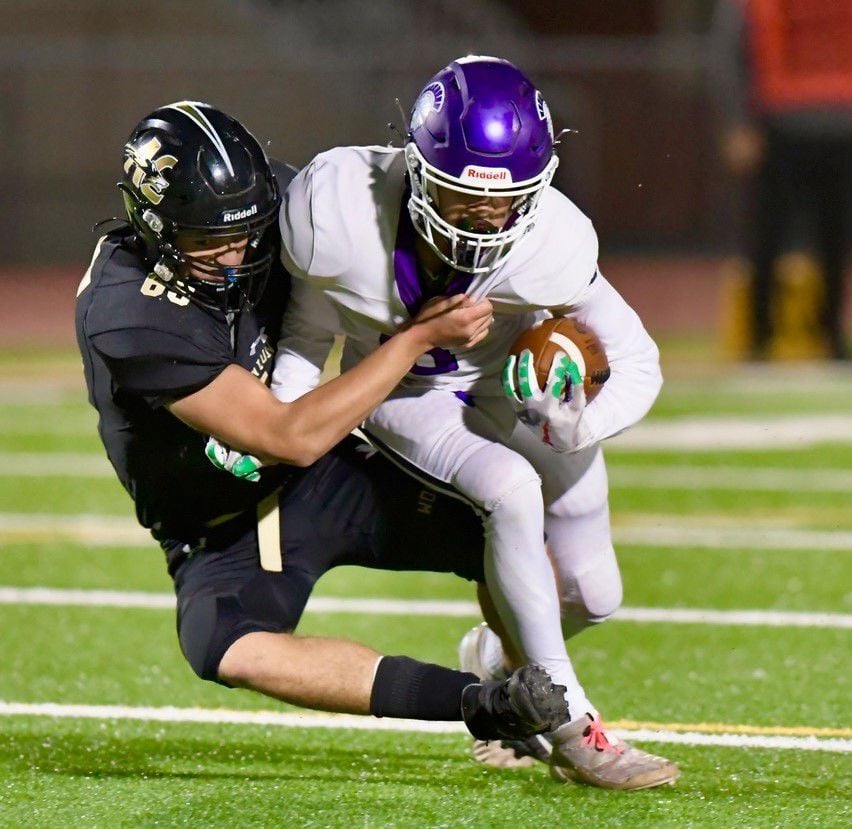 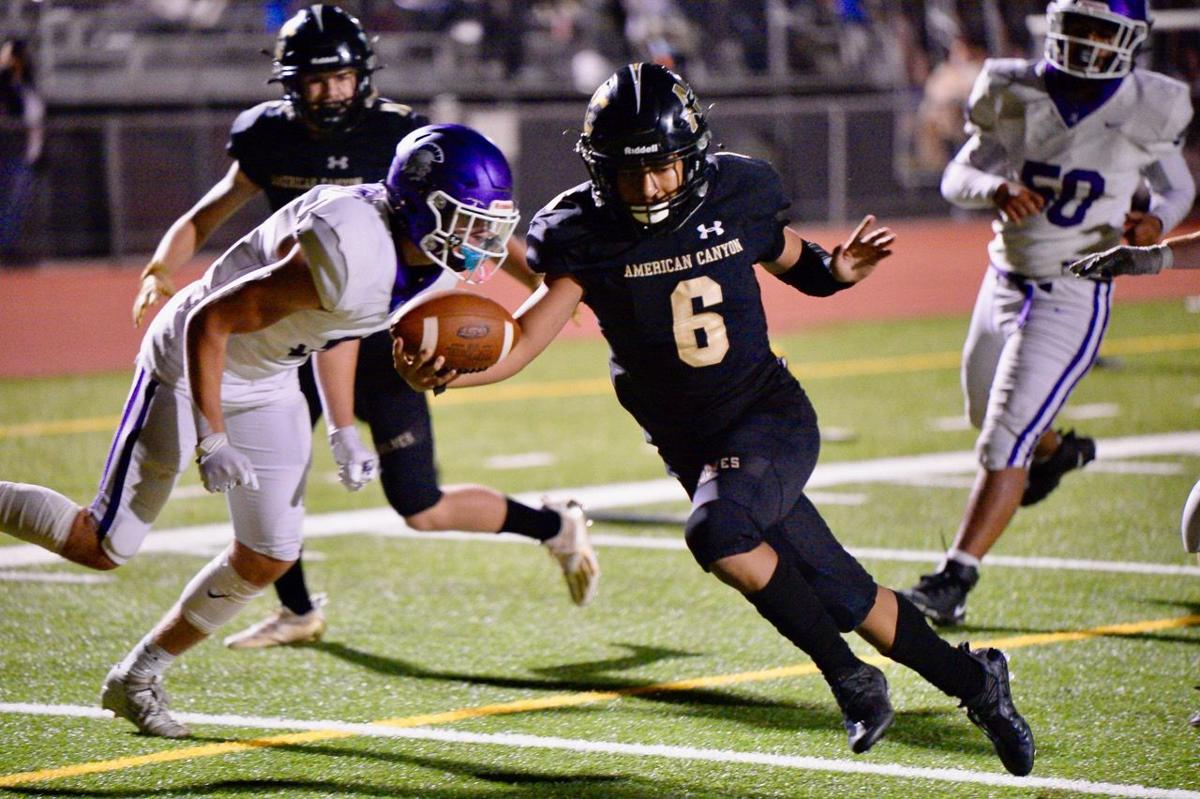 Sean Yumang keeps for an 11-yard touchdown in the final seconds as American Canyon grabs a 21-20 halftime lead over Petaluma on Friday night. 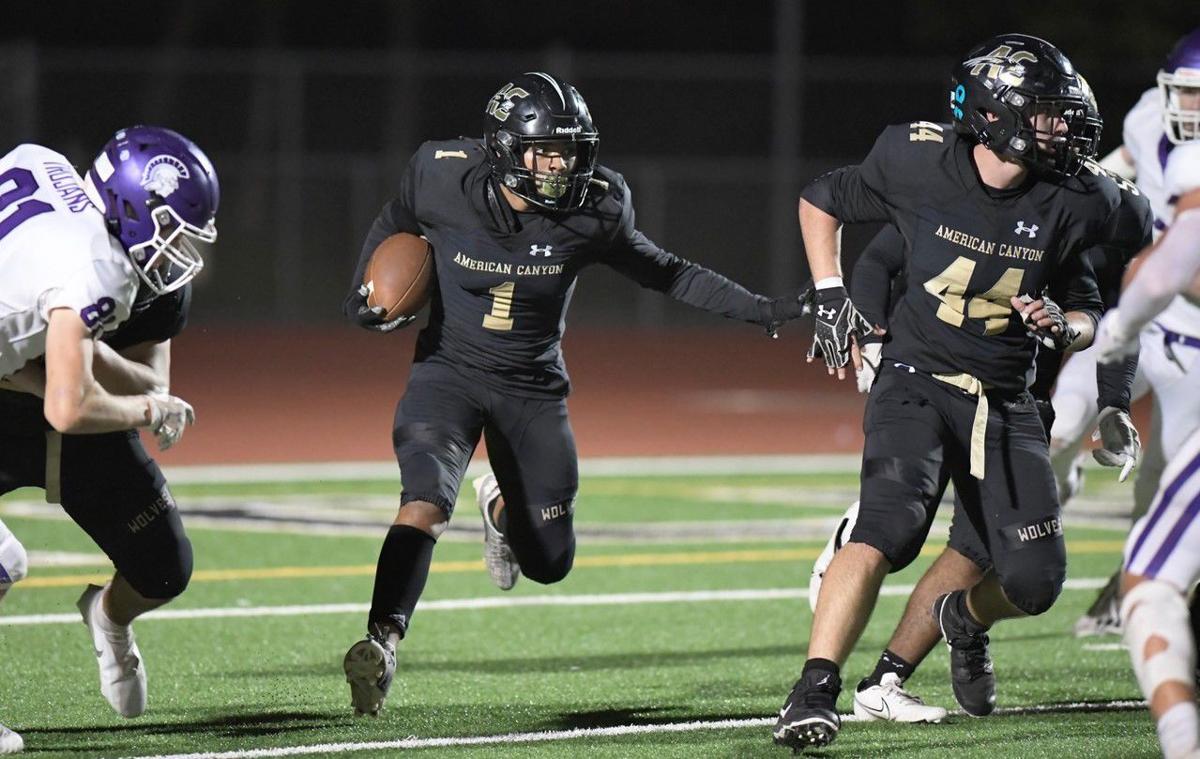 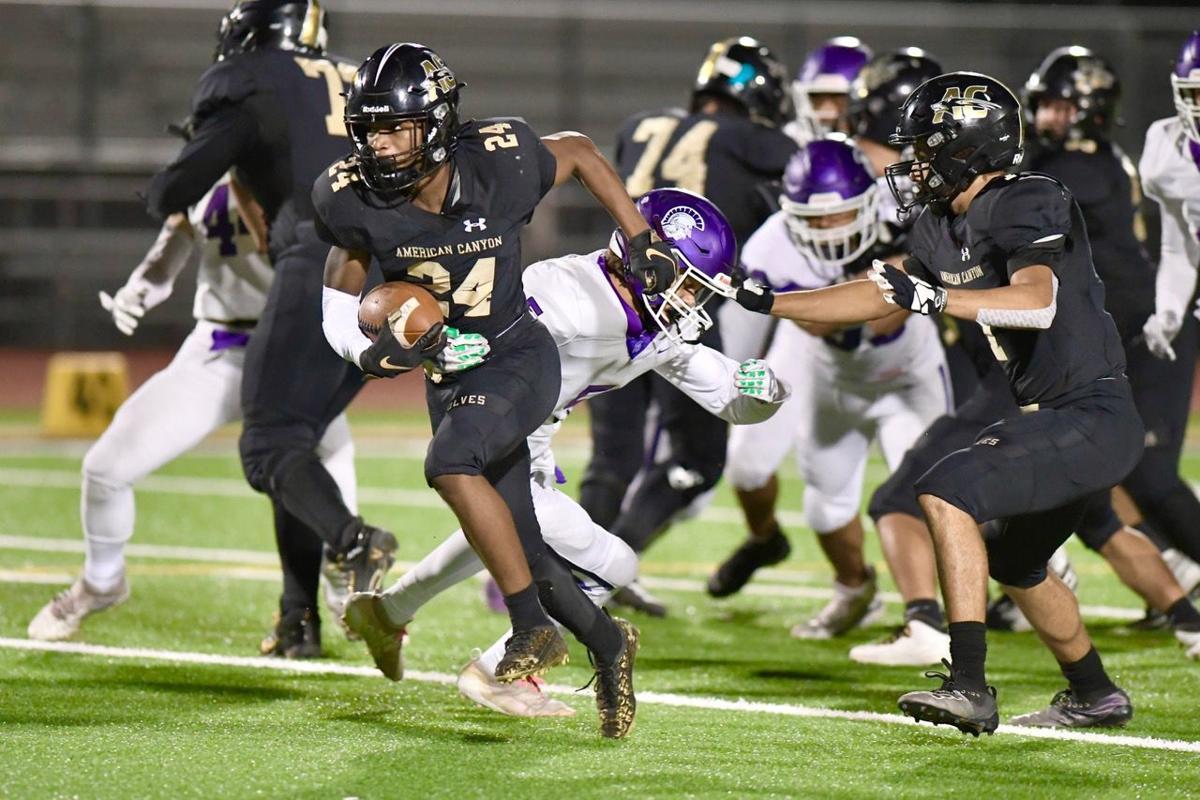 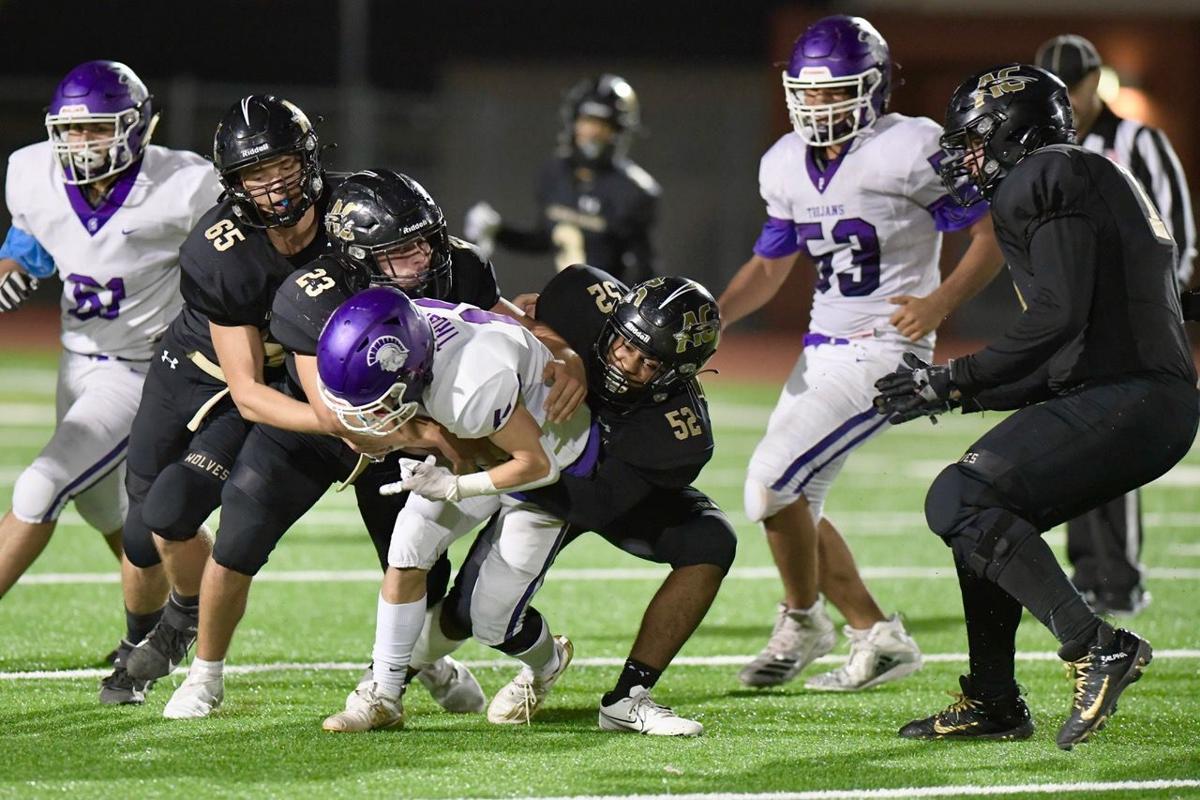 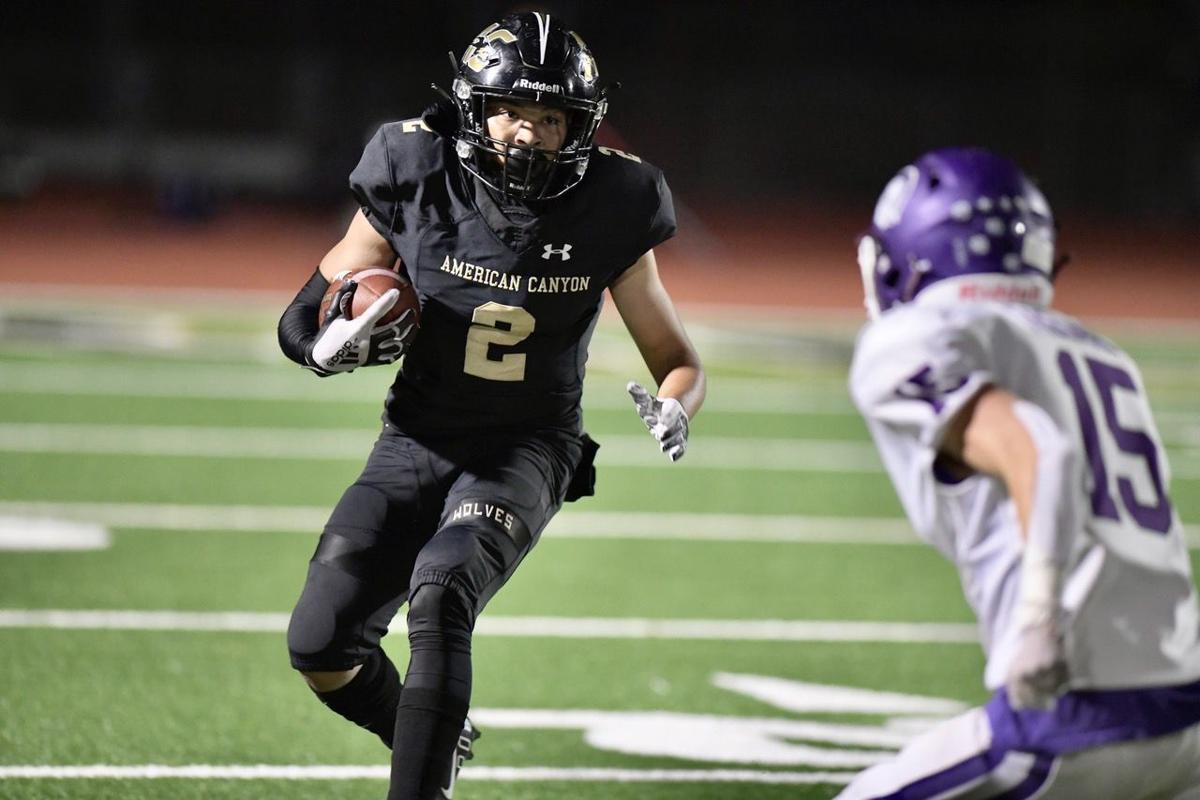 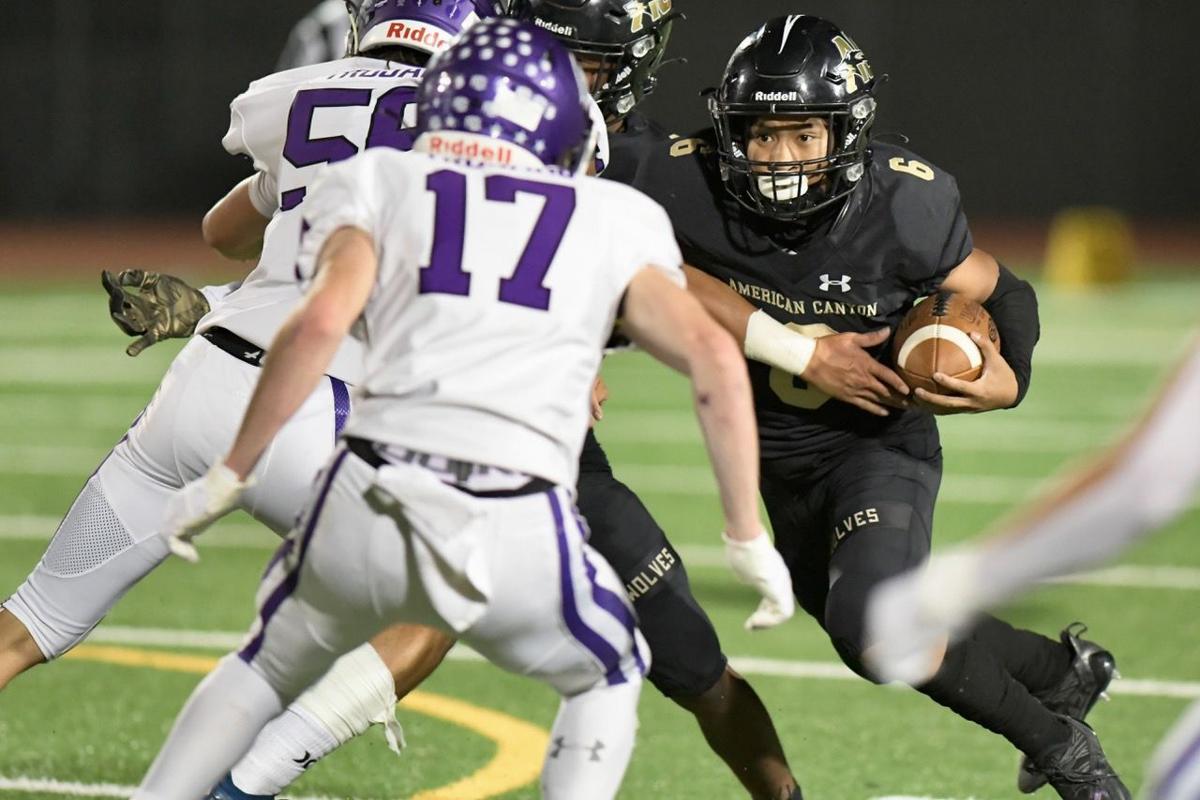 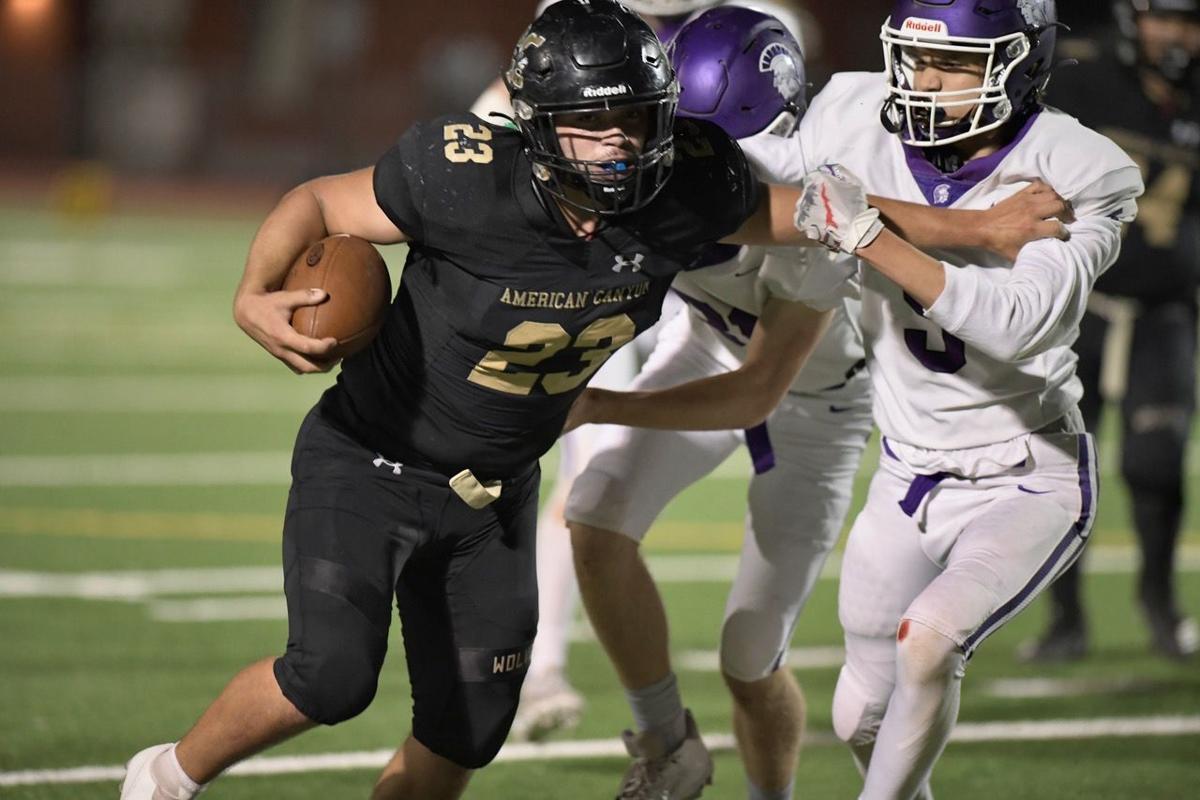 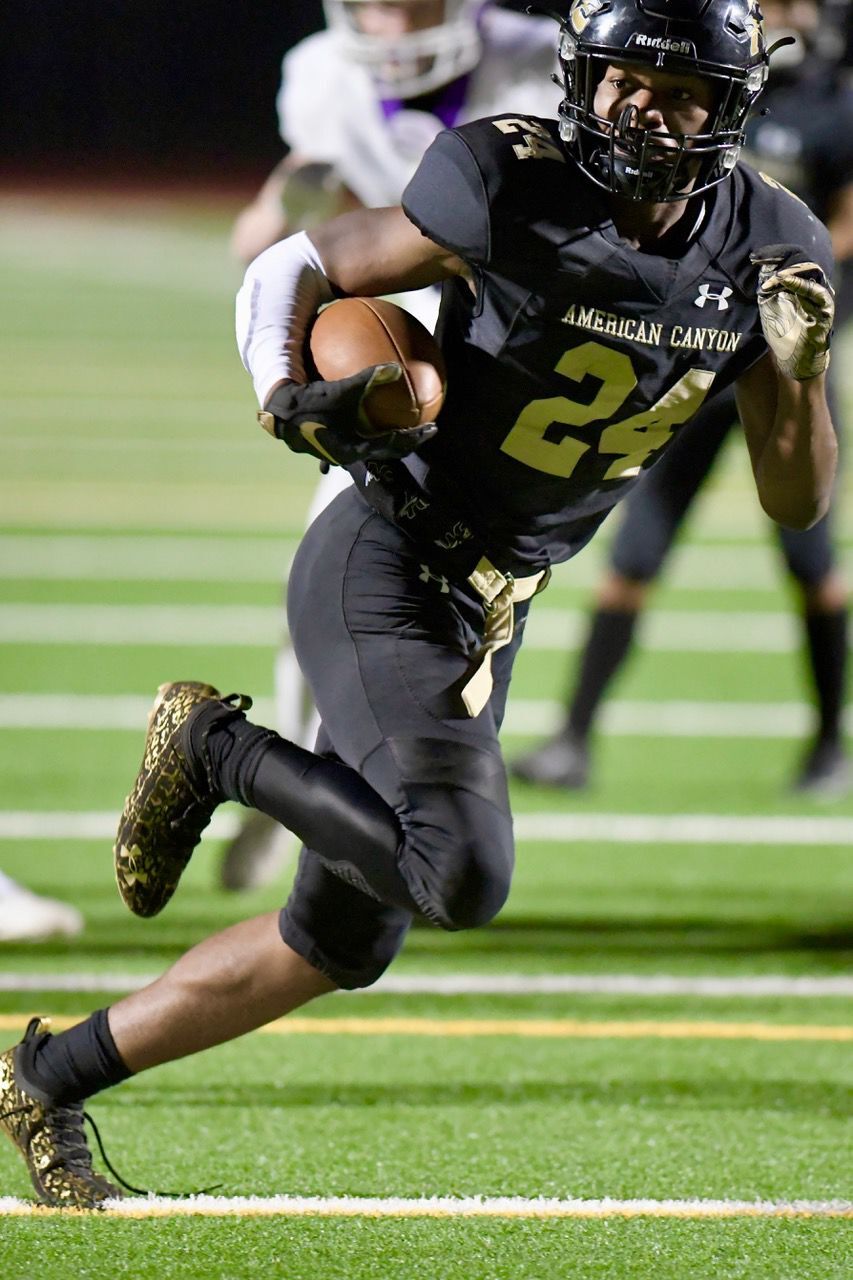 AMERICAN CANYON — The last time Sean Yumang started at quarterback for the American Canyon High football team, he just handed off the ball to Kapono Liu and watched his fellow junior set school records with 369 yards on 51 carries in a win at Berkeley.

With first-string quarterback Kaleb Anderson sidelined again, this time due to injury instead of COVID-19 protocol, Yumang didn’t have Liu to make his job easier.

But he did have another junior, James Aken, an offensive lineman who would moved into the backfield when American Canyon needed 3 yards and a cloud of dust.

With Yumang throwing for 139 yards and a touchdown and Aken rushing for 107 yards and two late scores, the Wolves prevailed 35-28 over a Petaluma squad they had been tied with for first place two weeks before.

The game was tied at 28 after each team scored on its first series of the second half. Each then went three-and-out. On the first play of the fourth quarter, Petaluma quarterback Henry Ellis threw incomplete on fourth and 2 after failing to get American Canyon to jump offside with a long count.

The Wolves took over at the Petaluma 42-yard line and handed the ball off to Aken in a Wildcats formation, where he would take a direct snap. On the fifth handoff, he scored from 9 yards out and Noel Angel capped a 5-for-5 night on extra points for a 35-28 lead with 10:28 left.

In a frenzied span of six plays midway through the quarter, the teams each turned the ball over twice. But the last of those was crucial, a Trojans fumble at the Wolves’ 1 that Tobyn Bunch recovered with about two minutes left.

With senior Kamel Jones and Aken carrying the ball on Wildcats plays, the Wolves hammered out three first downs and ran out the clock.

It was quintessential smash-mouth football for Bunch and the offensive line, though two or three running backs helped block a few times.

“Oh yeah, that was awesome,” said a teary-eyed Bunch, a third-year varsity starter, after what was probably his last American Canyon game. “It’s amazing to play with my team and to see them go through the same adversity that I do and to see them have the same feelings that I do. All the hard work I put in in the last year through COVID and making the team a team and making it a family, it’s all come true. It just means a lot to be a team captain and earn their respect and have their respect. We love each other as a family.”

Asked how the Wolves were able to overcome so many injuries, he said “it’s the bond we have, the fact that we’re a family and we fight for each other, that helps us keep pushing through adversity. That’s why we kept coming back tonight after they scored, over and over again. (On the last series), we knew we had to block for our brothers out there.

“It sucks that we have less of a chance to go to playoffs. But I don’t think it was ever about that. We’ve had a fun time playing together and coming together as a team. That’s why I play football. The sport of football is amazing, but it was the people who made me come back year after year and play harder and harder and play better and better. I believe our juniors will have a good team next year.”

The 5-foot-7 Yumang returned the opening kickoff to the Trojans’ 47-yard line to help American Canyon (6-4, 4-2 VVAL) get on the board first. His other backfield mate, senior D’Juan Seymore, ran the ball all four times during the drive, scoring on a 16-yard scamper.

Petaluma (7-3, 3-3 VVAL) tied it right up with a 15-yard TD pass from Ellis to fellow senior captain Neill Crudo. But Yumang showed his touch with a screen pass that Jelani Johnson caught in stride and turned into a 93-yard touchdown for a 14-7 lead.

“Sean’s got a chip on his shoulder because he knows he’s not the biggest guy, and he really stepped up and did a great job tonight,” American Canyon head coach John Montante said,” and I call James (Aken) ‘Wolverine’ because he just keeps going and doesn’t get hurt or complain.”

The Trojans tied it back up with a 9-yard run by junior captain Silas Pologeorgis, set up by speedy senior Anthony Drolet’s kickoff return to the 9.

The first of Yumang’s two interceptions on the night led to a missed 27-yard field goal by Petaluma. The Trojans forced a three-and-out and appeared to have the halftime momentum when Dawson Shaw made an acrobatic catch just inbounds in the end zone with 52 seconds left.

But Kamel Jones blocked the extra point, and Yumang capped a six-play, 68-yard, 46-second drive with an 11-yard scoring keeper with 6.7 seconds left to give the hosts a 21-20 lead going into the locker room.

“These kids have been through a lot — the pandemic, a natural disaster (a recent wildfire near the campus), coming back to school (on campus), readapting,” Montante said. “I’m just so proud of them. This is a good way to culminate a senior year. Now we see what happens with playoffs, but the program needed this win, these kids needed this, this school needed it.”

Sean Yumang keeps for an 11-yard touchdown in the final seconds as American Canyon grabs a 21-20 halftime lead over Petaluma on Friday night.