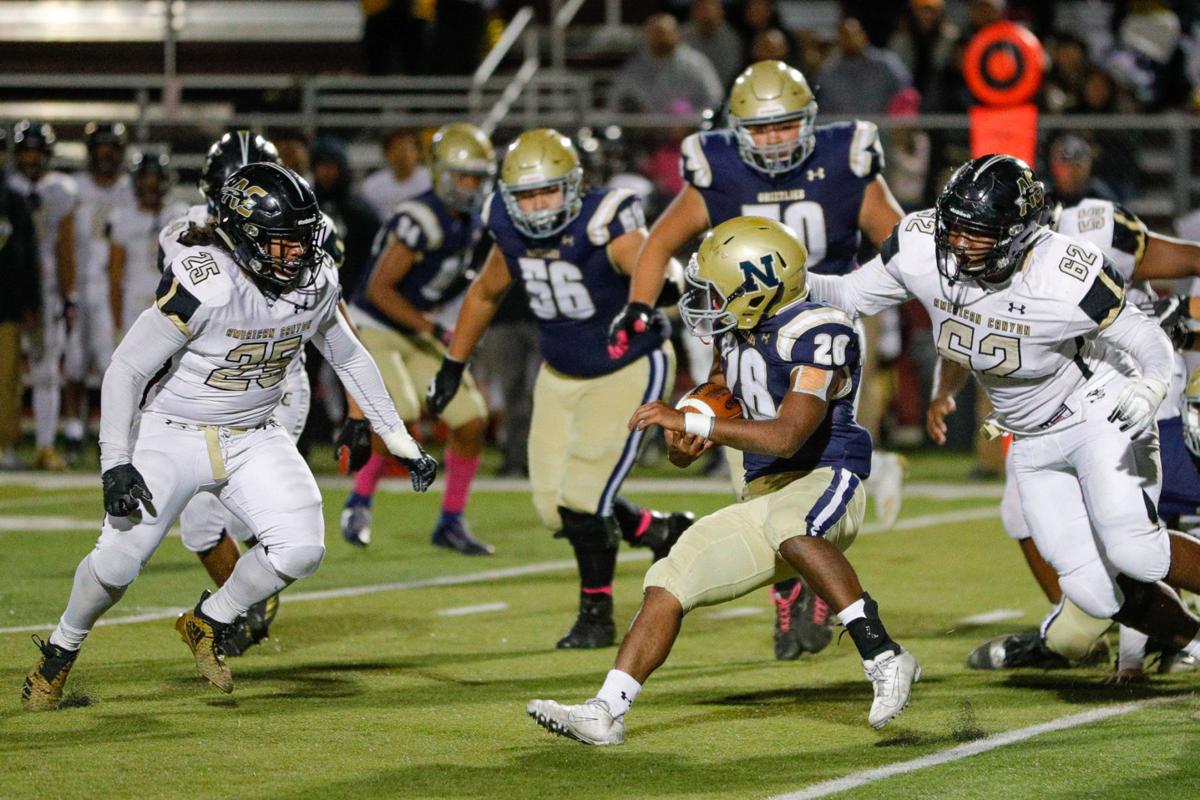 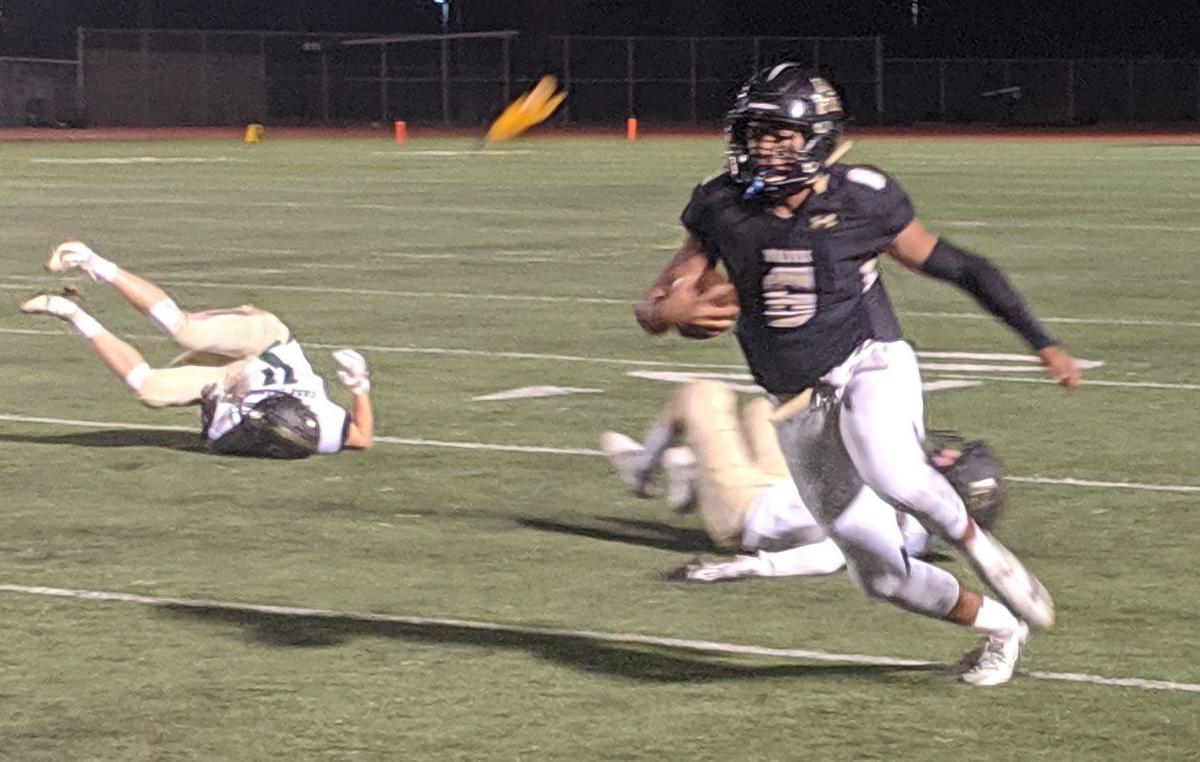 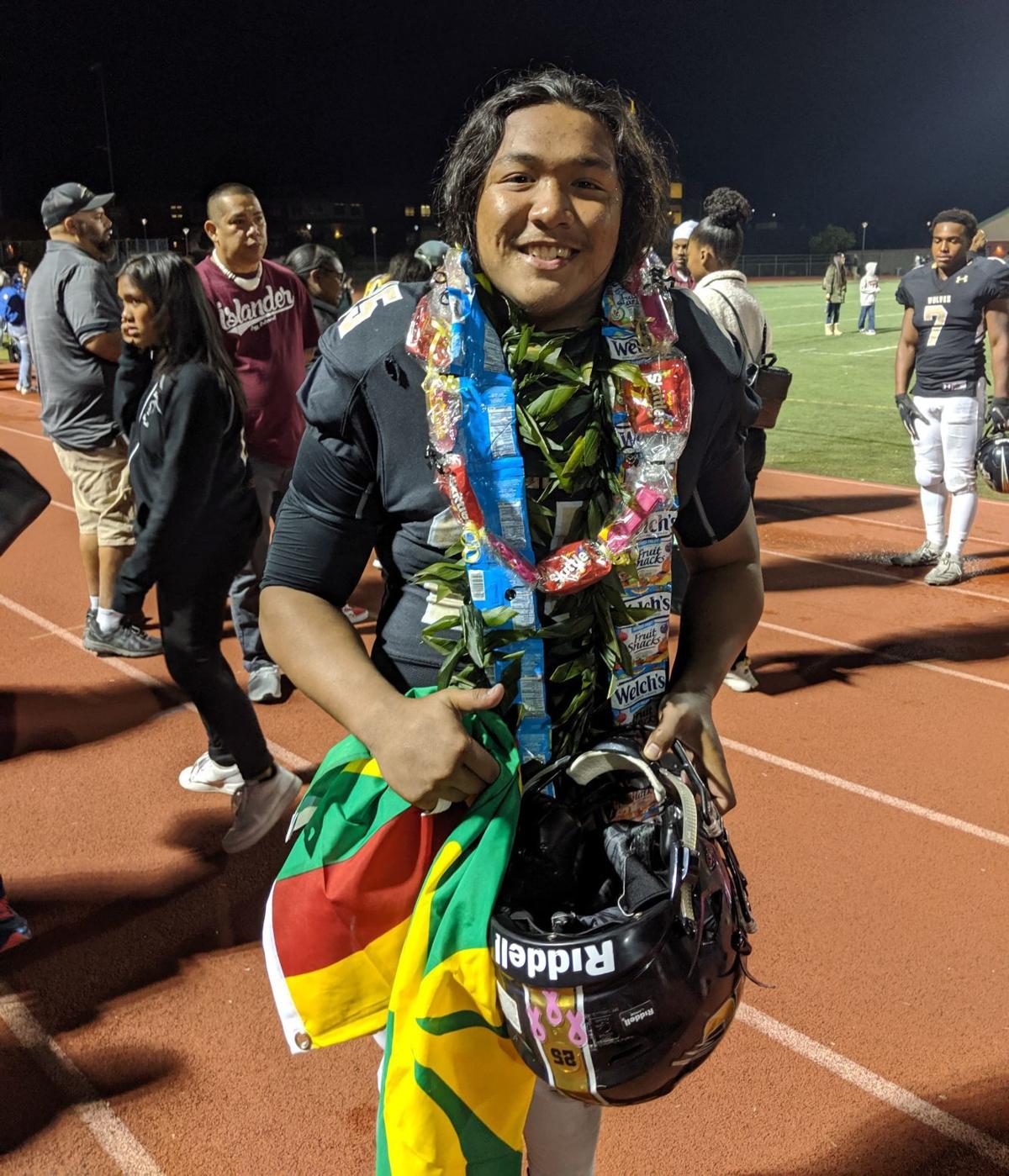 AMERICAN CANYON — It was Senior Night for the American Canyon High football program and its 12th-graders put in a hard-fought effort in a 13-6 victory over Casa Grande at the Wolf Den Stadium on Friday.

Casa Grande had lost 41-18 to Napa High, a team American Canyon beat 14-7, and so the Gauchos were expected to suffer a similar defeat against the Wolves. But Casa Grande was fighting for a playoff spot this time, and gave the Wolves all they could handle.

“Getting experience with these close games is something we’re gonna need for playoffs,” American Canyon senior captain Kekoa Wilson said. “We aren’t a team that blows out people, but we can’t let up. We can’t let people come back into games. We just gotta keep it going.”

American Canyon defense, which has become the heart of the Wolves this season, took center stage most of the game. The unit forced a quick punt and quarterback Vance Eschenburg quickly moved the Wolves down the field, with Kaave Gaviola and James Larson also having big roles on the evening. But on the 13th play of a long opening drive, an Eschenburg pass found its way into the hands of Casa Grande’s Antonio Bernardini for an interception in the red zone.

The American Canyon defense’s front seven continued to overwhelm the visitors’ running game, however, and the Gauchos were forced to punt again.

American Canyon (8-1, 4-1 VVAL) had better success on its second possession, as Larson did most of the heavy lifting with powerful runs in between the tackles for large yardage. Wilson finished off the 10-plus-play drive with what would be his lone carry of the game, a touchdown from 4 yards out. The point after was blocked, keeping it 6-0.

Casa Grande (3-6, 2-3 VVAL) grabbed a couple of first downs on its following drive, but got nowhere near the Wolves’ end zone until just before the halftime break.

With less than two minutes left in the first half, another Eschenburg pass was snatched out of the air by the Gauchos – this time by Nick Markovich, in American Canyon territory. Senior wide receiver Rashad Nixon ran a fade route to the corner of the end zone and tipped a pass from junior quarterback Miguel Robertson off a Wolves defender before catching it for a 13-yard touchdown. The extra point missed low, however, and the teams went into the break tied 6-6.

“Great teams win in close games. But when you make the games close because you’re screwed up and you make mistakes, that’s a problem,” American Canyon head coach John Montante said. “I would have liked for us to hit our stride by now, but we keep making boneheaded mistakes. I will give our guys credit; they responded well in the second half. Our offensive line stepped up big time and ran like we haven’t run so far this year. So that is a big positive, and we just need to build on that.”

The American Canyon offense looked determined coming out of the locker room and quickly raced down the field. The Wolves stalled in the red zone, however, when Eschenburg was tackled from behind on fourth down.

But the defense held Casa Grande to only 11 total yards of offense in the second half.

“We were watching film and we noticed that they were unconditioned and we knew if we kept pounding them, they’ll get tired and eventually we’ll get downfield,” Wilson said. “We weren’t able to capitalize on our strong offensive line play, but we got it done in the end.”

The breakthrough for the Wolves came in the fourth quarter, when they converted on fourth down with an Eschenburg keeper at their own 40-yard line. After the gutsy call the senior found a hole up the middle for a 22-yard burst, and the Wolves were in business.

Two plays later, Eschenburg connected with Gaviola on a quick pass to the right side of the field. Gaviola was pushed out of bounds at the 1-yard line, but the senior ran in the winning score on the next play and Justin Del Rosario split the uprights with the extra point to make it 13-6.

The Gauchos had two drives to answer. But on the first one, they were stopped cold on fourth down by a blitzing Wilson from the middle linebacker position. On the final drive of the game, American Canyon’s Jordan Fisher picked off a Robertson pass to seal the win.

“This was a huge game for us. We all knew if we lost this game, they would be taking our spot in playoffs,” Wilson said. “We didn’t play like it, but we ended up wanting it enough to get to the point where we want it to be. It wasn’t pretty, but we just got to keep working.”

American Canyon will travel to Napa next Friday to take on Justin-Siena (6-3, 2-3 VVAL) in each team’s regular-season finale.

“We can’t take Justin-Siena lightly next week,” Wilson added. “Everything from now on is basically a playoff game for us. We just got to keep playing hard.”

Roman Webb completed 12 passes for 180 yards and two touchdowns, one to Sean Yumang and another to Kaleb Anderson, and ran 12 times for 89 yards and another score. But the Wolves (7-2, 2-2 VVAL) still dropped their second straight VVAL game.

James Aken, who had four carries for 14 yards, also scored a touchdown.

Kapono Liu had 10 carries for 27 yards. Yumang rushed for just 11 yards on two carries but had seven catches for 115 yards, along with an interception on defense.

Mario Juarez had three rushes for 5 yards and Anderson one for 16 yards. Anderson had two catches for 50 yards, Trenton Angold two for 16 yards, and Juarez one for 43 yards.

Dalano Murray’s two sacks was a highlight for American Canyon on defense.