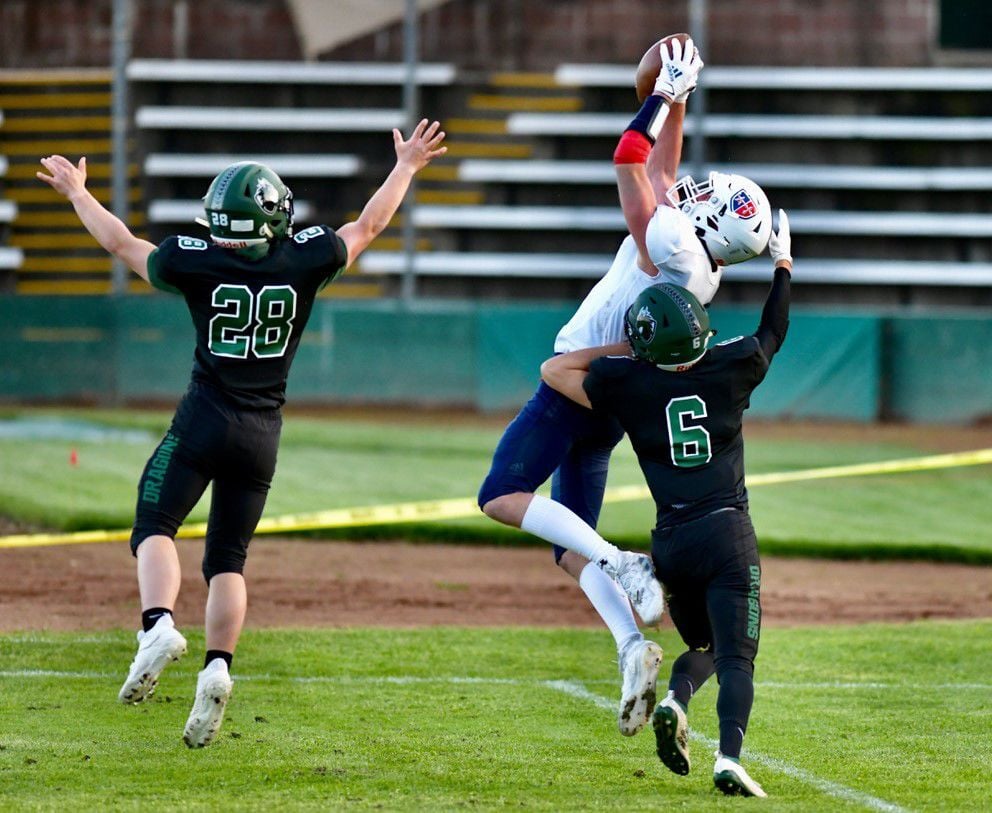 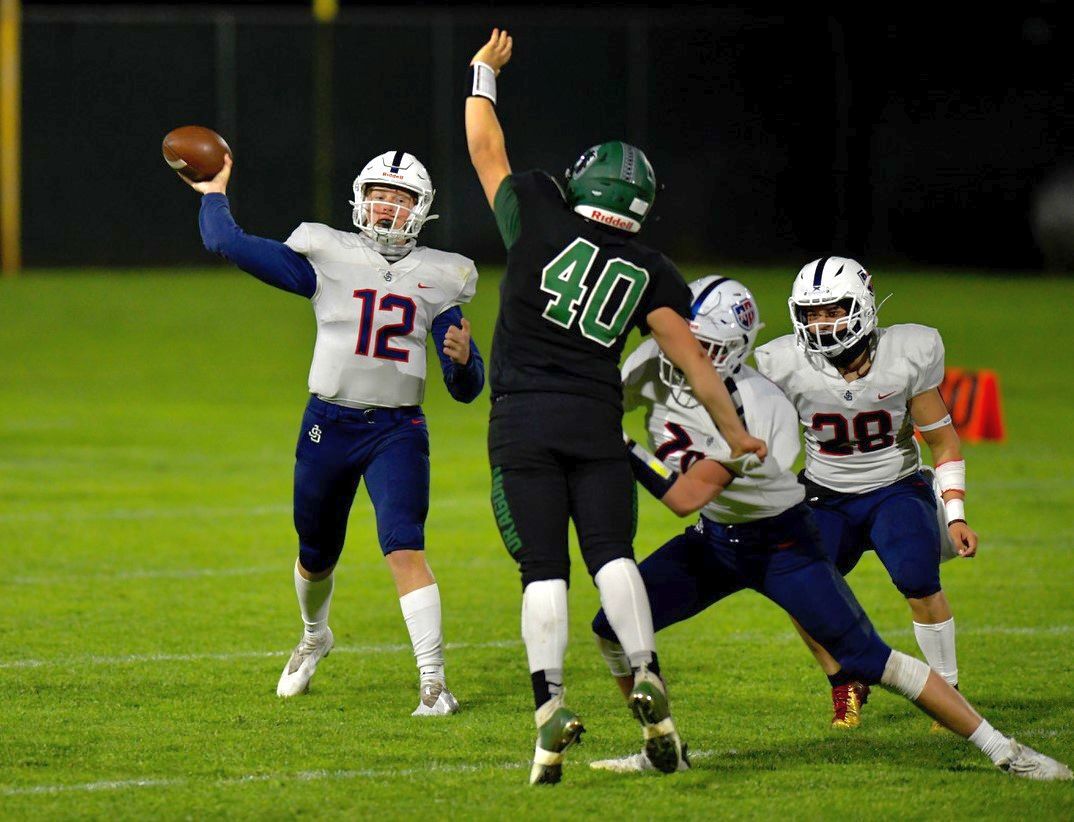 Justin-Siena's Hudson Beers gets his pass off under pressure while Tommy Crist and Roman Topete 28 fend off Sonoma Valley's Jonathan Alva. 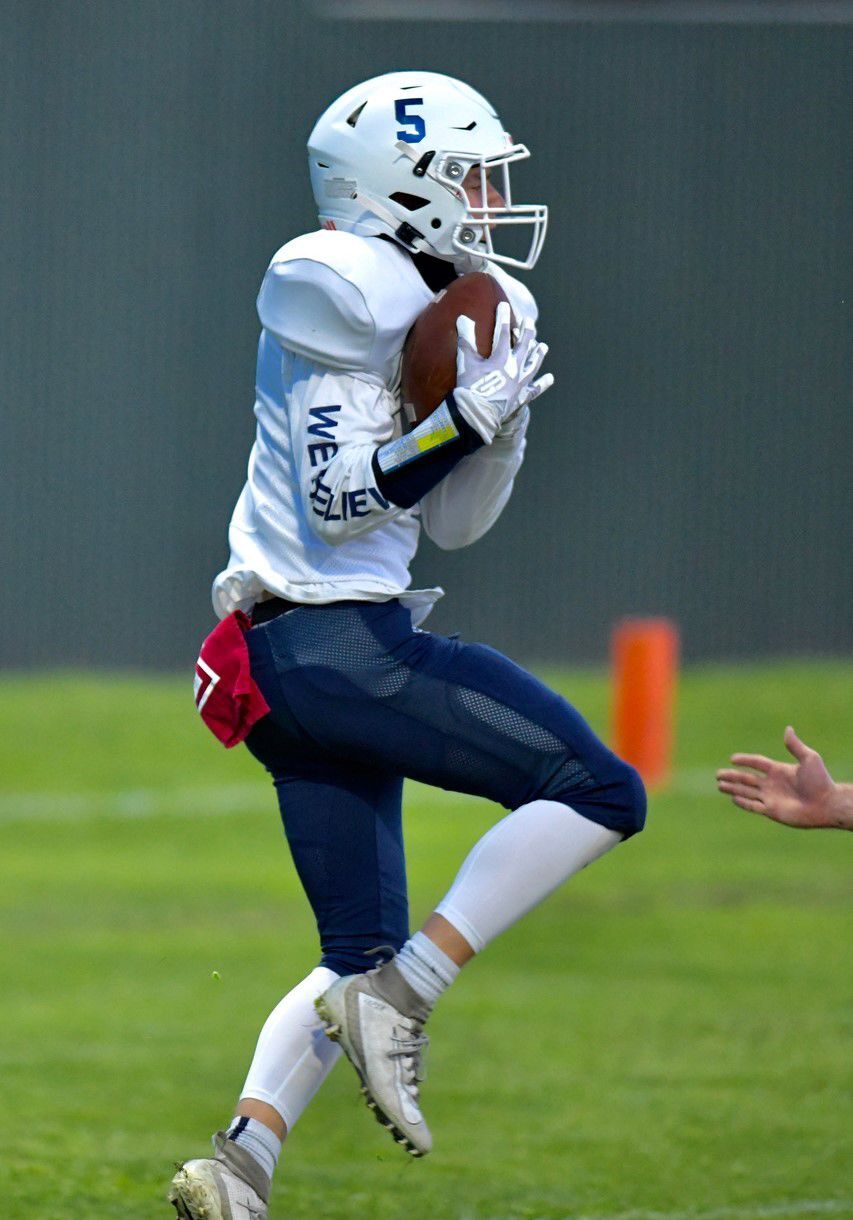 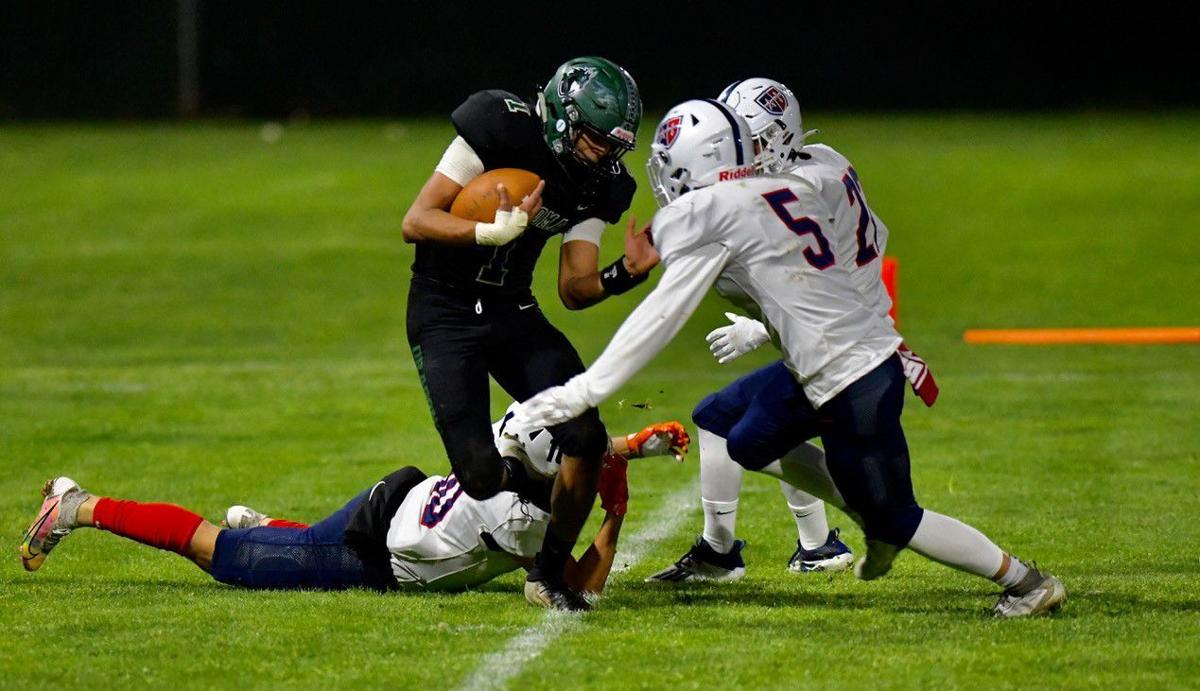 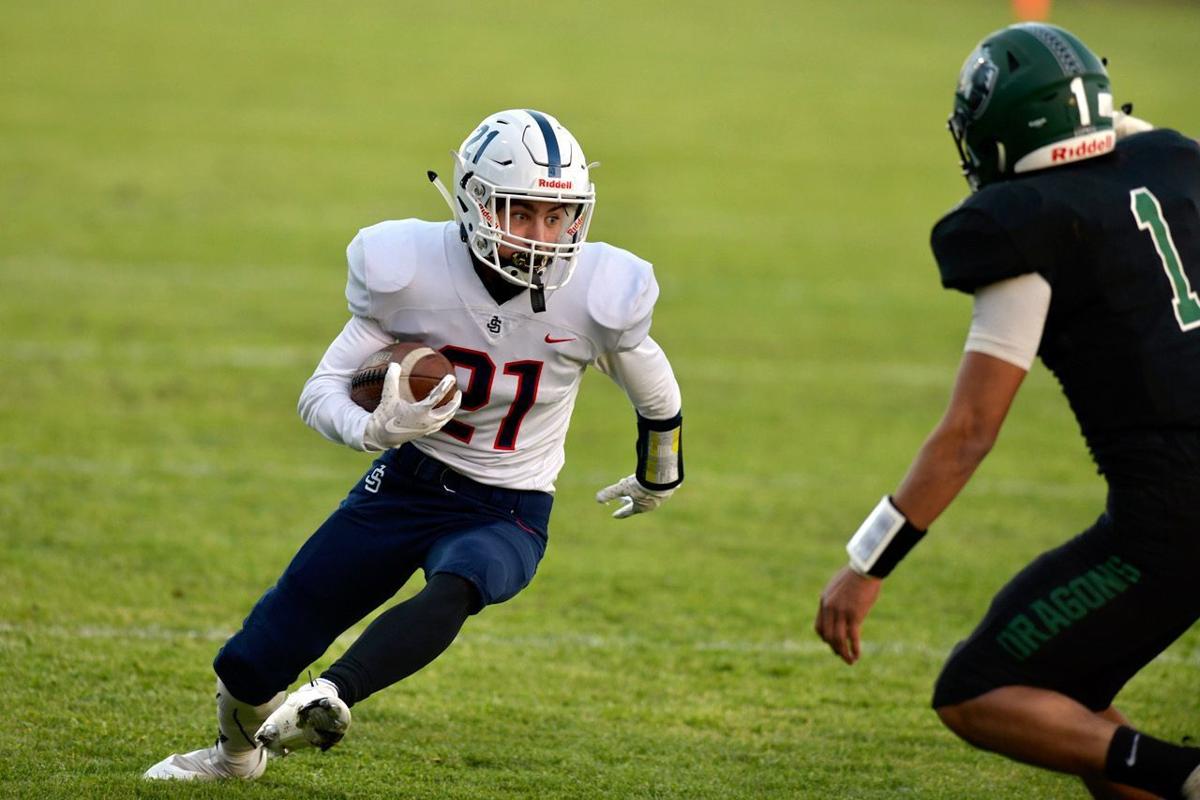 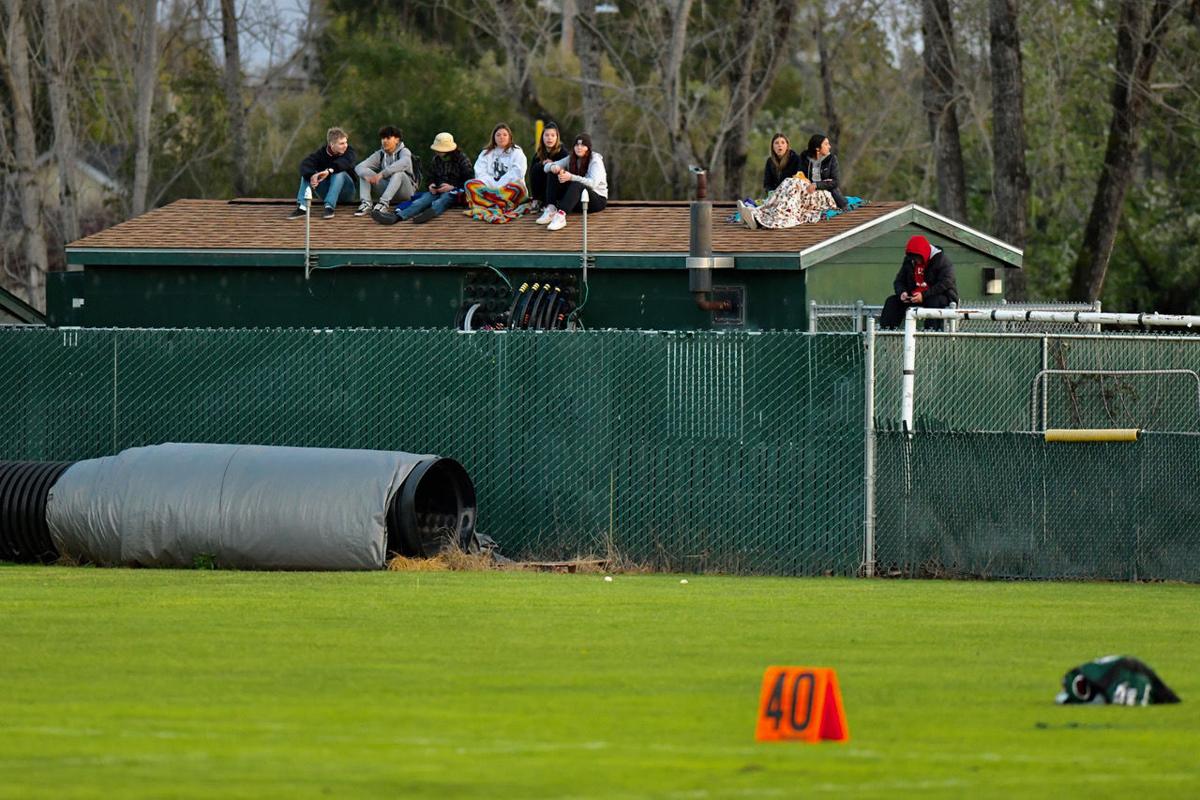 Young fans, not allowed inside Arnold Field during Sonoma Valley's home game against Justin-Siena on Friday, find a nice vantage point beyond the fence. 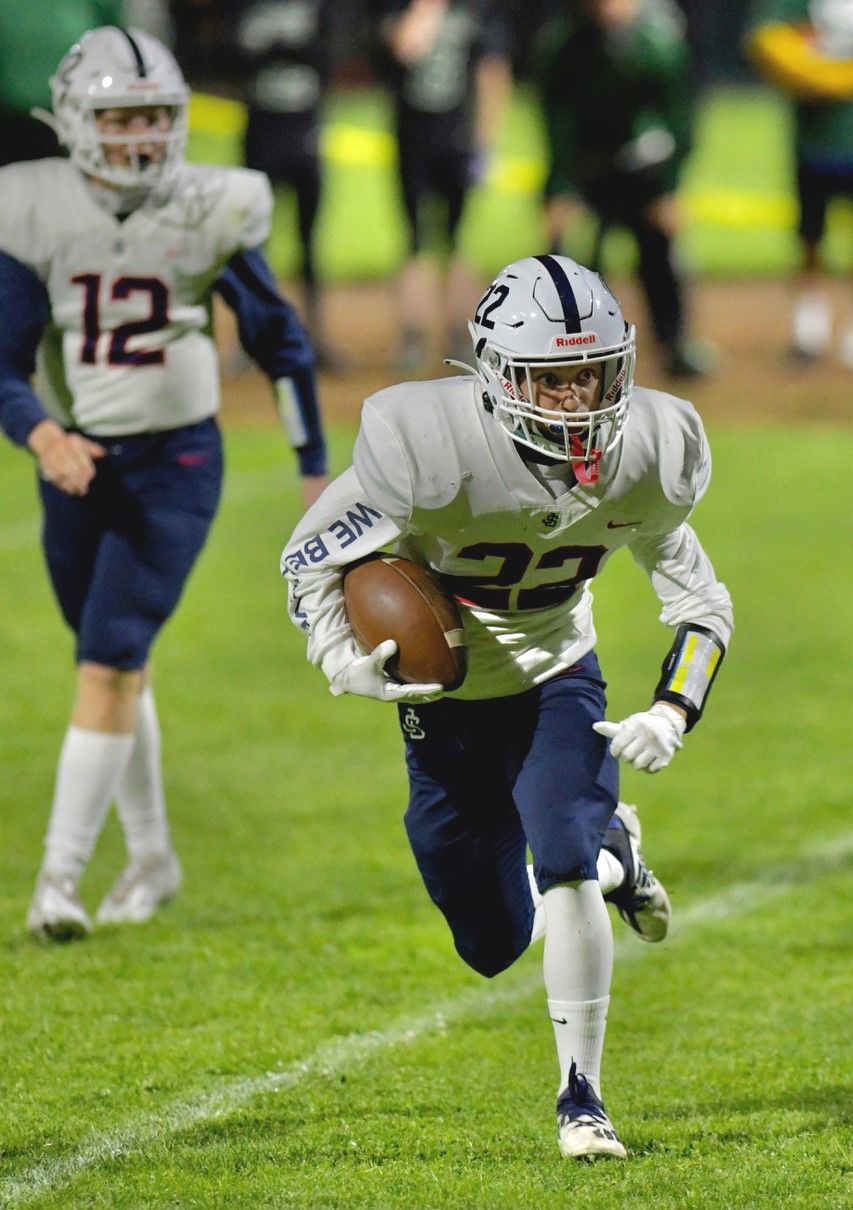 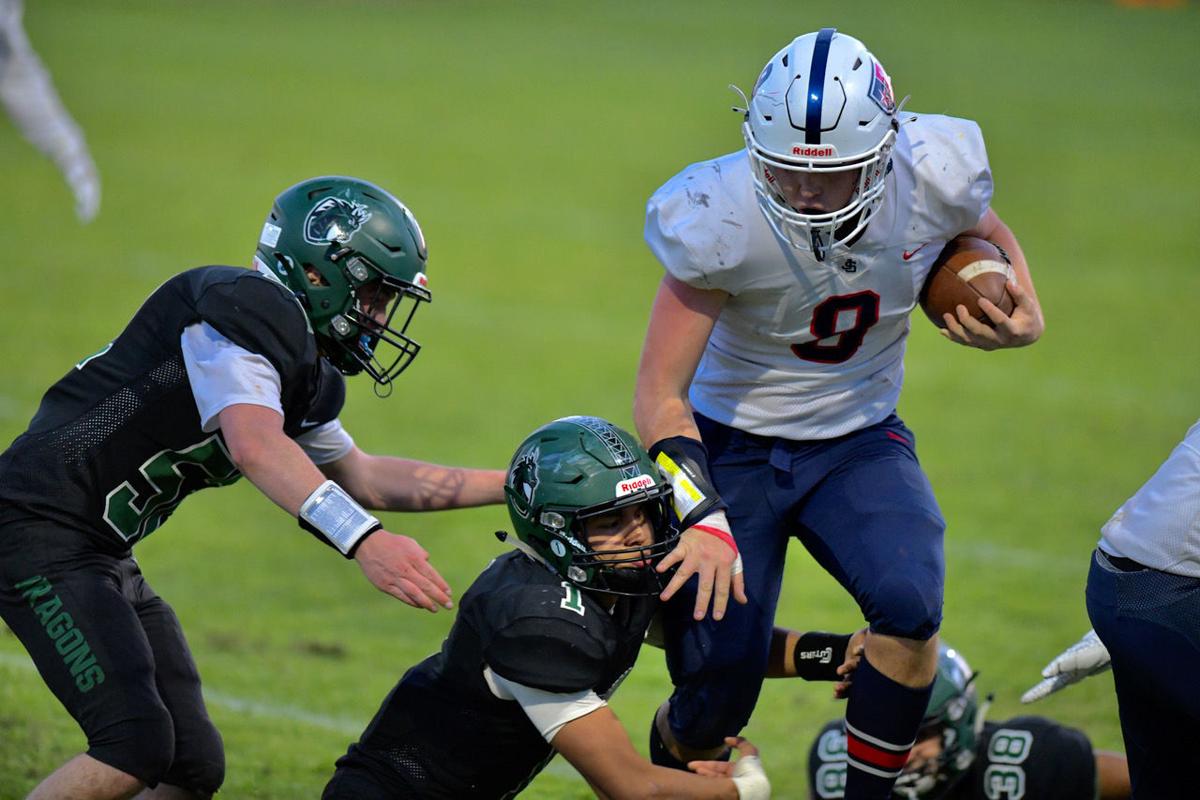 Justin-Siena's Noah Young runs it up the gut against Sonoma Valley on Friday night. 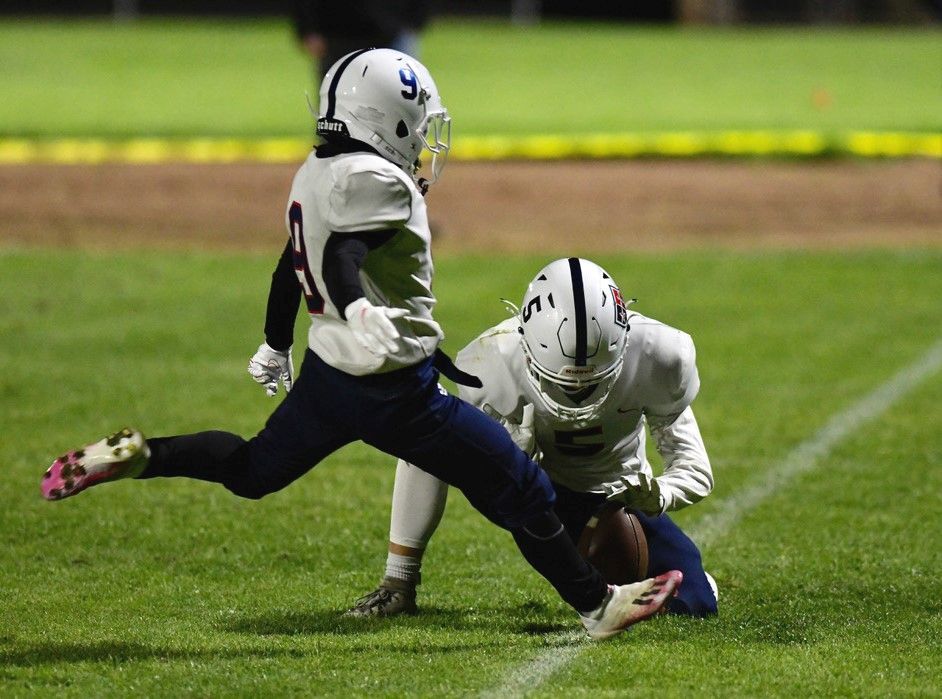 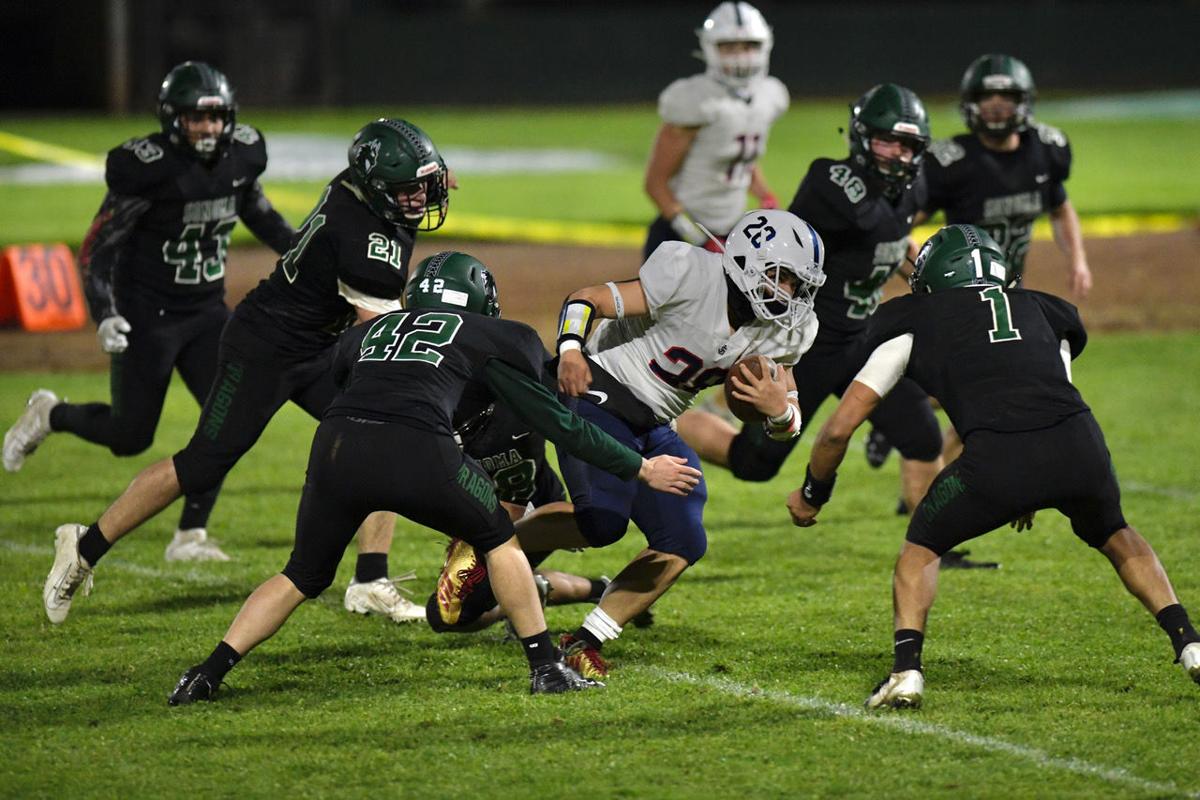 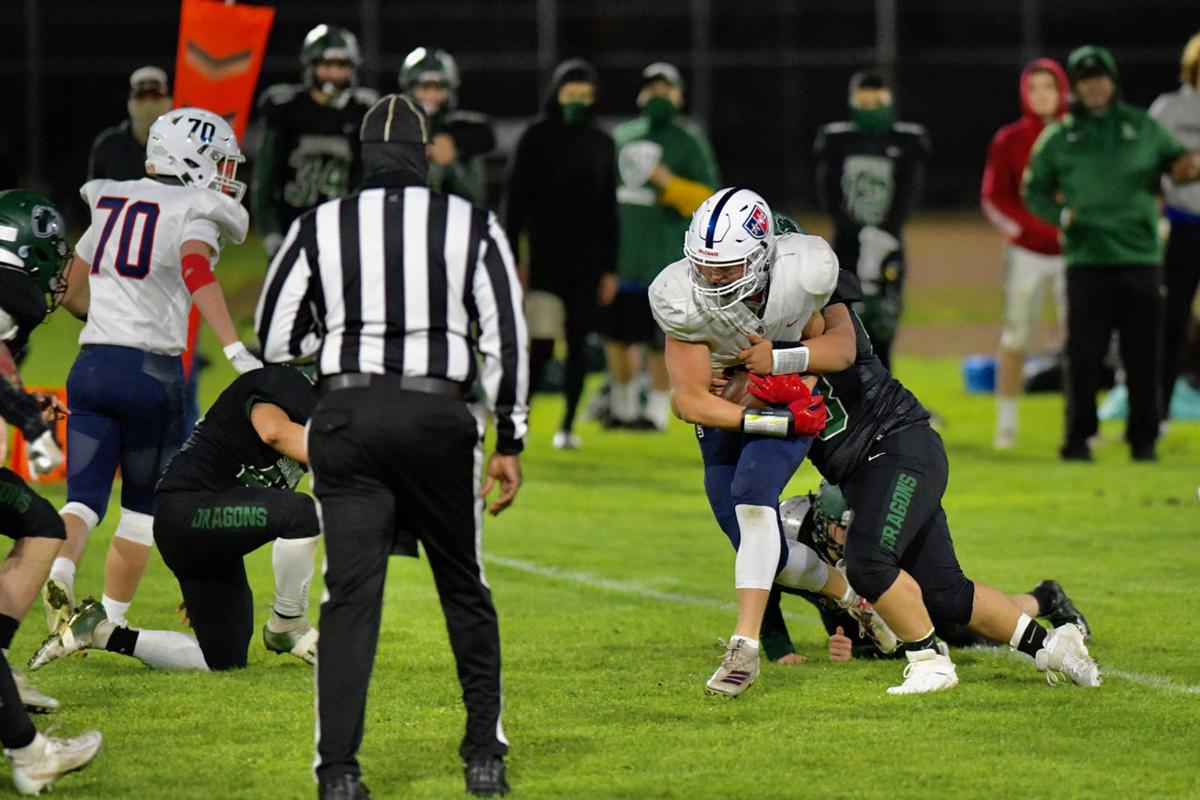 Justin-Siena's Miles Martin drags a Sonoma Valley defender with him on a carry Friday night.

SONOMA — As the International Space Station swept across the Northern California sky at a breakneck speed Friday evening, equally as fast was Justin-Siena’s high-octane offense in the second quarter.

The Braves used their wide array of weapons during the backbreaking outburst to breeze past Sonoma Valley, 38-14, in the penultimate game at storied Arnold Field.

Justin-Siena quarterback Hudson Beers was highly efficient, completing his first seven passes en route to the blowout victory. The senior put up 221 passing yards for the game, completing 15 of 20 throws to six different targets for five touchdowns and no picks.

“Having so many weapons is one of the things that makes us so hard to deal with. If you focus on one guy, we’re set up that we have other dudes that can make plays. So you can’t really give too much attention to one guy without opening somebody else up,” Justin-Siena head coach Brandon LaRocco said.

In a 7-0 win over Petaluma the previous week, Beers was just 11 of 26 for 155 yards with no touchdowns and one interception.

“I think one of the things Hudson did really well tonight was being able to distribute the ball to the open receiver and not just trying to force it to a specific target. He did a much better job of reading the field,” LaRocco added. “In a lot of ways that first game had a lot of mistakes you might see in the scrimmage. We were able to work through some of those tonight, which was good to see.”

After forcing a turnover on downs to start the game, the Braves (2-0) quickly went to work on their first drive. Beers connected with quick passes to Miles Martin, Caden Parlett and Josh Tichy. On fourth down from the 1-yard line, the signal caller located Tichy on a slant pass for the first score. The extra point was missed just slightly to the right.

“People now know that we have so many weapons on offense,” Tichy said. “The offense has really meshed together and everyone is playing awesome right now. When Hudson hits his shots and gets everyone passes, there isn’t much anyone can do.”

The Dragons (0-2) answered back with their best weapon, power back Adrian Alvarez. The 5-foot-7, 235-pound bowling ball of pain was trouble all evening for the Braves, as the senior collected 125 rushing yards on 21 carries and had both Sonoma Valley scores.

Alvarez’s first score was similar to how he did most of his damage on the night, with the running back picking up 4-yard bursts and grabbing his first touchdown in the second quarter to tie the score 6-6.

“It was crazy,” said Braves defensive back Seth Morrison. “I tried to bring him down and I threw my body at his legs and he’s just a big ole’ beast of a runner and really there’s nothing really stopping him.”

Added Tichy of Alvarez, “Oh yeah, all the credit to him. I got pretty low a couple of plays and I hit his hip with my shoulder and I was like, ‘Damn, this is going to be rough to tackle him tonight.’”

It appeared early in the first quarter that, for the second week in a row, the Braves would have a close, low-scoring battle on their hands. But the Justin-Siena offense went into overdrive for the rest of the first half.

Beers opened the Braves’ second drive with three quick passes, the last one finding the end zone by way of Morrison. The quarterback found a tiny window between two colliding Dragon defenders for the 26-yard touchdown.

The Braves quickly gave the ball back to their red-hot offense, as their defensive line jumped on a fumbled Sonoma Valley snap. It took Beers one play to find the end zone through the air again, as he deposited a perfect pass to Parlett down the left sideline for a 39-yard touchdown.

“We did struggle a little bit last game (against Petaluma) and it showed,” Morrison said. “But with this game, I know people around the league are going to see that we are the real deal.”

The Dragons’ offense continued to struggle in the quarter, as they turned the ball over on downs with the blink of an eye. Only a few minutes before the halftime break, the Braves added their third score of the frame. Beers once again found Parlett, this time on a 2-yard quick pass. Justin-Siena went into the break up 24-6 after rattling off 18 unanswered points. Beers was a near perfect 11-for-12 passing in the first half for 164 yards.

“It’s so great playing with a quarterback of Hudson’s level,” Morrison said. “Seeing it in practice — nobody sees what he does in practice and it is just impressive. He is one of the top quarterbacks in NorCal and it really shows. When he gets into a flow and into a hot streak, all of us get on hot streaks and we get big wins.”

Each team traded quick drives to open the third quarter, but the Braves were the first to strike after the halftime break. Beers completed a deep 40-yard pass to Tichy that put the Braves in the Dragons’ red zone, before finding Parlett with a 5-yard pass for their third touchdown connection of the night. Kevin Sosa lined up and blasted the extra point through the uprights for Justin-Siena, the first for either team during the contest.

The Braves picked up their lone rushing touchdown of the game last in the third quarter as running back Sophomore Roman Topete pulled off his best imitation of Justin-Siena defensive coach Diano Pachote, a former star running back for the Braves, by bashing his way in for the 2-yard score. Sosa found his second extra point of the game, as the junior placekicker used the right upright as a pinball bumper to knock the ball through.

The Justin-Siena defense kept the Dragons in check for most of the evening and were able to match their physicality.

“I was really proud of the way our defense played tonight. We gave up a couple of series, but on the following drive we came back and always got the stop,” LaRocco said.

“We have high standards on defense, but we know that we aren’t going to shut everyone out and how you respond to bad drives is important. In particular (it takes) the leadership of Noah Young, with his ability to just get in there and lay down the wood. He sets the tone for us on defense.”

Why is there still so much doubt surrounding the Atlanta Hawks?

Justin-Siena's Hudson Beers gets his pass off under pressure while Tommy Crist and Roman Topete 28 fend off Sonoma Valley's Jonathan Alva.

Young fans, not allowed inside Arnold Field during Sonoma Valley's home game against Justin-Siena on Friday, find a nice vantage point beyond the fence.

Justin-Siena's Noah Young runs it up the gut against Sonoma Valley on Friday night.

Justin-Siena's Miles Martin drags a Sonoma Valley defender with him on a carry Friday night.