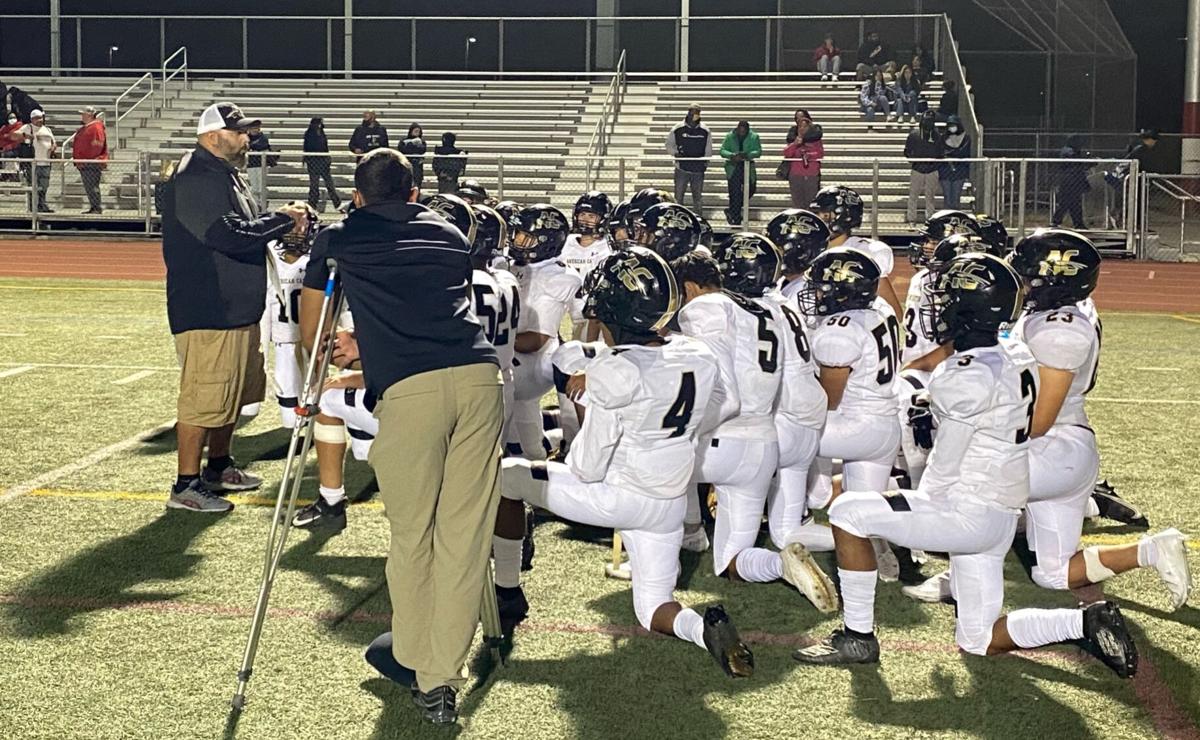 American Canyon gets ready to run a play during Friday night's game at Burlingame.

BURLINGAME — With a young team on the football field for the second time in five days and a lengthy road trip to face an unfamiliar opponent, perhaps it’s not too surprising that Friday’s trip to Burlingame was a difficult one for American Canyon.

How it started for the Wolves, though, was certainly cause for concern.

They committed four turnovers in the first 14 minutes, found themselves in a quick three-score hole, and ultimately fell 31-6 to the host Panthers.

“It was probably a confluence of events,” American Canyon head coach John Montante said. “Short week and Burlingame’s a good team. Give them a lot of credit.”

Two of the Wolves' first five snaps resulted in turnovers as junior quarterback Kaleb Anderson was picked off and junior tight end James Aken fumbled at the end of a reception.

Burlingame’s Greyson Bosshard both recovered the fumble and picked off the pass. He lost the ball at the 2 on the interception return, but teammate Davis Grundmann recovered it in the end zone for the game’s opening score. Bosshard found redemption just a minute later while Aken was stripped by Will Uhrich, who has accepted a preferred walk-on offer to Arizona.

The Wolves (0-2) forced a turnover of their own while down 14-0, when Kapono Liu penetrated the backfield for a strip sack of Panthers quarterback Ryan Kall, both forcing and recovering the fumble. Three plays later, it was back in Burlingame’s hands as Anderson was intercepted by safety Liam Friedman. Again, Burlingame (2-0) nearly gave the ball back at the end of the interception return but managed to pounce on it.

Fumbles were a theme throughout the opening half, with the teams having to salvage a combined three mishandled snaps. Burlingame went up 14-0 late in the first quarter when Kall hit Charlie Koch for a 72-yard completion, then punctuated the drive by racing to the pylon from a yard out.

The Wolves reached the red zone early in the second quarter after a Noel Angel 29-yard run and Anderson’s 14-yard screen to Liu to convert a fourth-and-11, but Uhrich’s diving interception at the 3 ended any hopes of getting on the scoreboard.

A Lukas Habelt 42-yard touchdown run put Burlingame up 21-0 just over two minutes later. Kall converted a 22-yard field goal and fired a 36-yard touchdown pass to Uhrich in the third before the Wolves broke the shutout with a 1-yard touchdown run from Liu, who took a direct snap in a Wildcat formation and ran over the middle. The score ended Burlingame’s season-opening shutout streak at 83 minutes and 35 seconds.

“We’ve known Kapono’s been a good player since he’s been at our school,” Montante said.

As difficult as it was for the visitors to find early bright spots, they developed a bend-but-don’t-break mentality in the second half. The Panthers entered the red zone three times in the final two quarters and came away with just three points.

“When we decide to do stuff and we settle down, we can be OK. They’re learning, and we’re growing, and we’re going through some growing pains right now,” Montante said. “They’ll get through it, but you’ve gotta take your bumps.”

Those bumps were more metaphorical than physical, as neither team suffered any significant injuries. Trainers didn’t have to step on the field once to attend to an injured player all night.

The junior varsity game was called off due to positive COVID-19 tests within the American Canyon JV roster.

The American Canyon High football team had just rallied from a 12-0 deficit to take the lead when visiting Rodriguez answered with the winning field goal for a 15-13 nonleague win Monday night.

American Canyon gets ready to run a play during Friday night's game at Burlingame.