Vance Eschenburg has thrown for 1,093 yards and eight touchdowns with just three interceptions, and is the Wolves’ second-leading rusher with 600 yards and four touchdowns on 110 carries. 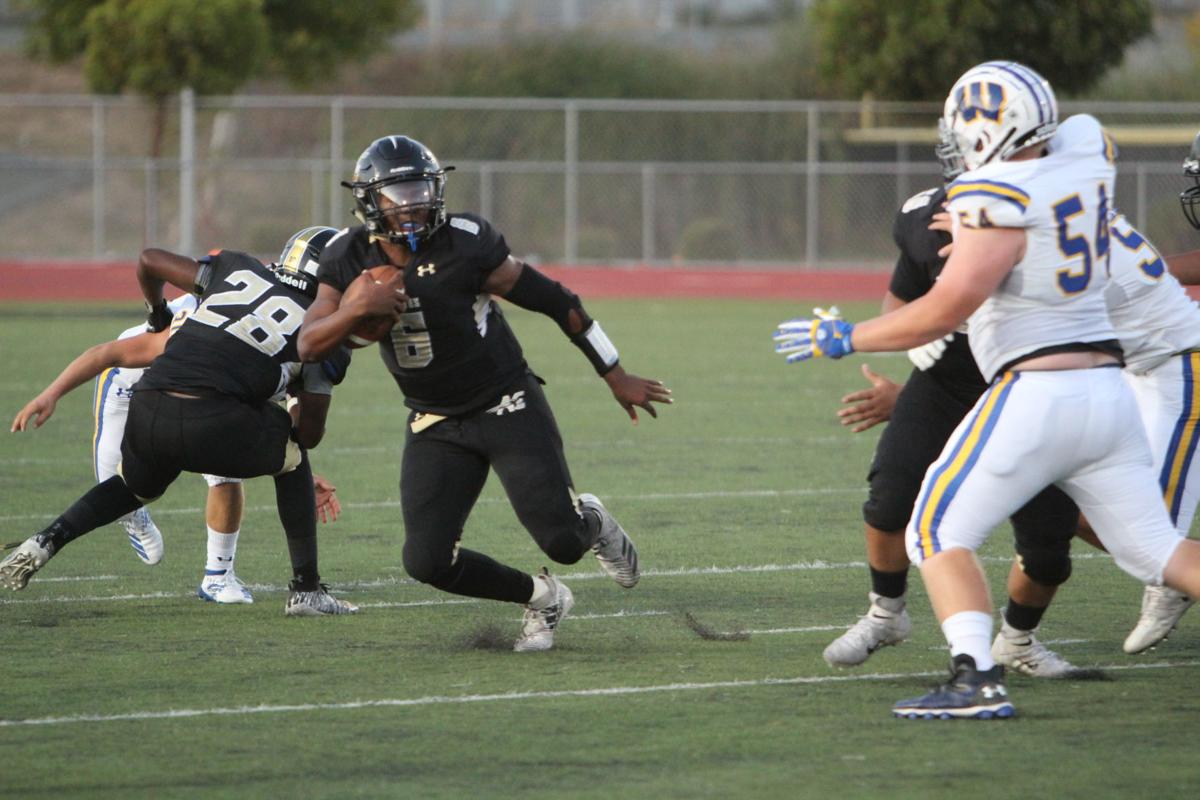 American Canyon's Vance Eschenburg looks for a seam during the Wolves' 29-12 win over Wood at Wolf Den Stadium on Sept. 13.

AMERICAN CANYON — The competitiveness and popularity of high school football on a Friday night is what American Canyon quarterback Vance Eschenburg lives for.

“I really enjoy the support we get from the town and our classmates,” the senior said after a recent practice. “The pressure is something that gives me pleasure every week. It’s very fun.”

Eschenburg and the Wolves had a hot start to the season, winning their first seven games before finishing the regular season 8-2 with a 4-2 Vine Valley Athletic League record.

He has completed 45% of his passes for 1,093 yards and eight touchdowns with just three interceptions, and is the Wolves’ second-leading rusher with 600 yards and four touchdowns on 110 carries. He’s more than doubled his passing yards of last season, when he threw for 479 yards with six TDs and no picks.

Eschenburg said he enjoys passing and running the ball equally.

“Leading the team in both is a pretty cool stat,” he said.

“He’s the kind of kid everyone wants to coach and have on their team,” Montante said. “I love having him. He’s a great kid. He’s always in the weight room working hard and never misses practices. He’s everything you want. He sets a good strong example for everyone.”

But it’s not all about individual accomplishments for Eschenburg, the lanky leader of the Wolves’ vaunted attack.

“I think we’ve had a pretty good season so far,” he said. “We’re not surprised to be looking at the playoffs.”

American Canyon is seeded fifth in the North Coast Section Division 3 playoffs and will open by visiting No. 4 Hayward (9-1) at 7 p.m. Friday.

The Farmers, who are ranked No. 6 among NCS Division 3 teams by MaxPreps.com, are on a six-game win streak after going 6-0 in the West Alameda County League’s Shoreline division.

American Canyon is ranked No. 7 in the same poll after a rocky finish to its regular season.

After outscoring their first six opponents by a combined 211-36, including Vine Valley Athletic League shutouts of Petaluma and Sonoma Valley, the Wolves squeaked past Napa, lost to Vintage, edged Casa Grande and lost to Justin-Siena.

Eschenburg, who threw for more than 100 yards in five of the first six games, had no more than 84 in three of the last four contests. But he showed toughness during that final stretch.

In the 14-7 win over Napa, which was scoreless at halftime, he was sidelined for the night after getting tackled hard at the end of an 11-yard keeper late in the first half. Held out in the second half as a precautionary measure, helmet off, Eschenburg showed he was OK by throwing the ball with a teammate. He happily watched backup Vinnie Espejo guide American Canyon to two scoring drives, including the winning seven-play, 92-yard march.

Knowing he had that kind of talent backing him up, Eschenburg came back to start at Vintage in the following week’s first-place battle at Memorial Stadium. Despite Eschenburg’s 16 of 32 passing for 225 yards – all season highs – and a touchdown, the Wolves fell 28-14.

After a 13-6 win over playoff-hungry Casa Grande in which Eschenburg threw only his second and third interceptions of the season, American Canyon closed VVAL play with a 17-10 loss at Justin-Siena. Despite trailing 17-0 after one quarter and not scoring until three minutes into the second half, the Wolves outgained the Braves 288-271.

Eschenburg is eager to help the Wolves get back on track after they finished second in the VVAL for the second year in a row, this time in a tie with Napa.

“We definitely plan to make up for regular-season losses in the playoffs,” he said.

Whenever the season ends, Montante is sure to miss the cerebral Eschenburg.

“Vance is an awesome kid,” Montante said. “He is mellow, but a goofball at the same time. I have him in my psychology class as well. He adds to the discussion and is very thoughtful.”

Sunday was a good day for high school football teams in the Napa Valley.

The Justin-Siena football team delivered some early haymakers that allowed the Braves to prevail over visiting American Canyon, 17-10, on Frid…

Vance Eschenburg has thrown for 1,093 yards and eight touchdowns with just three interceptions, and is the Wolves’ second-leading rusher with 600 yards and four touchdowns on 110 carries.

American Canyon's Vance Eschenburg looks for a seam during the Wolves' 29-12 win over Wood at Wolf Den Stadium on Sept. 13.