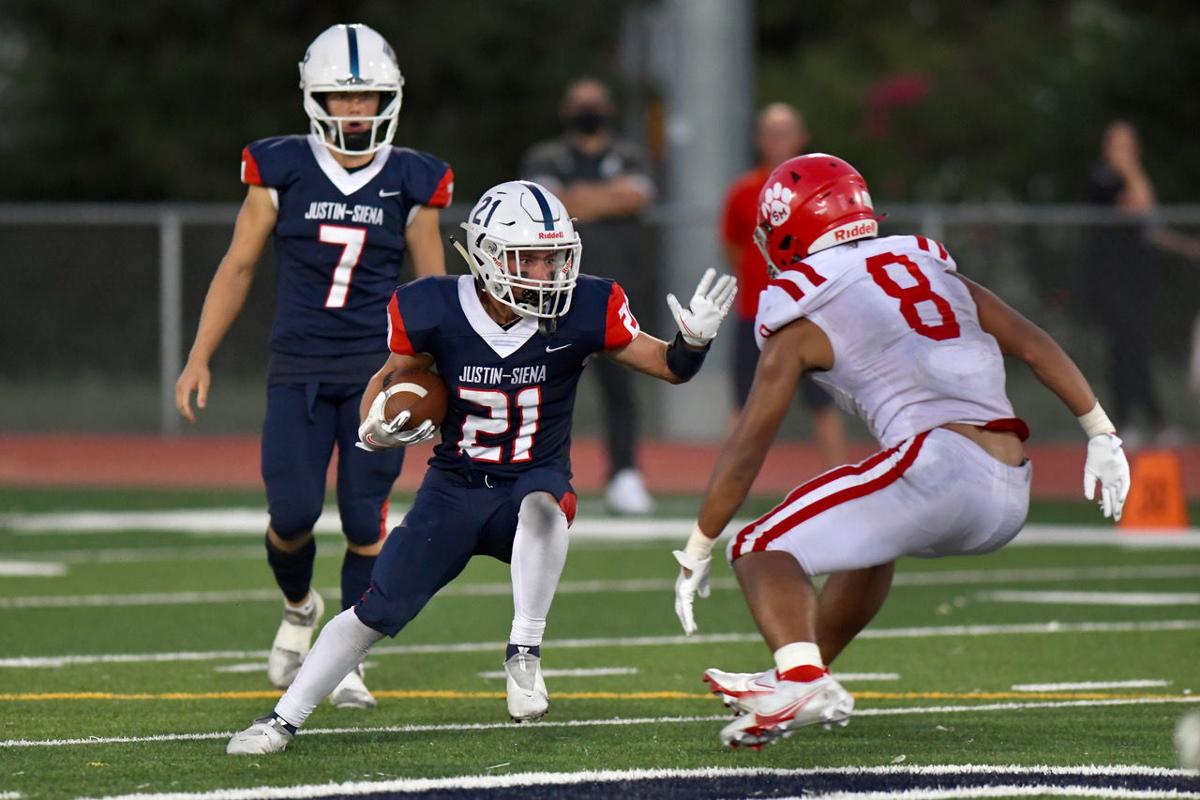 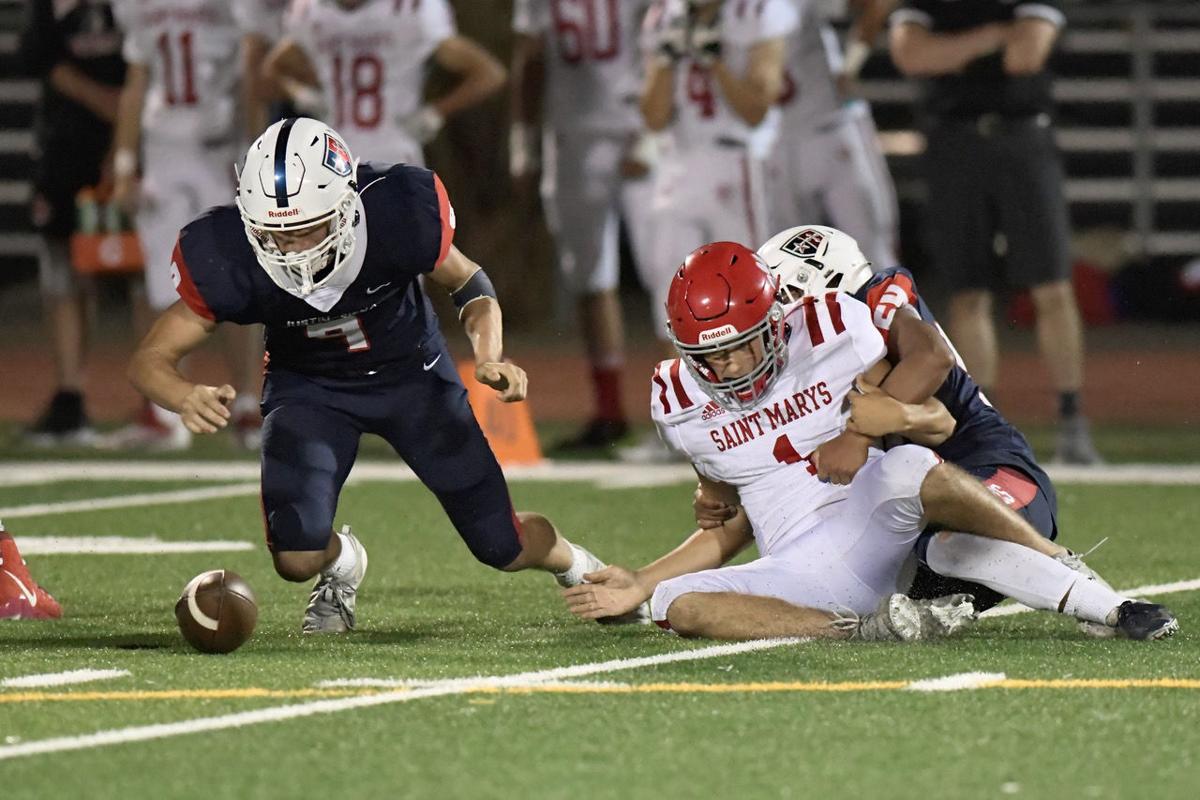 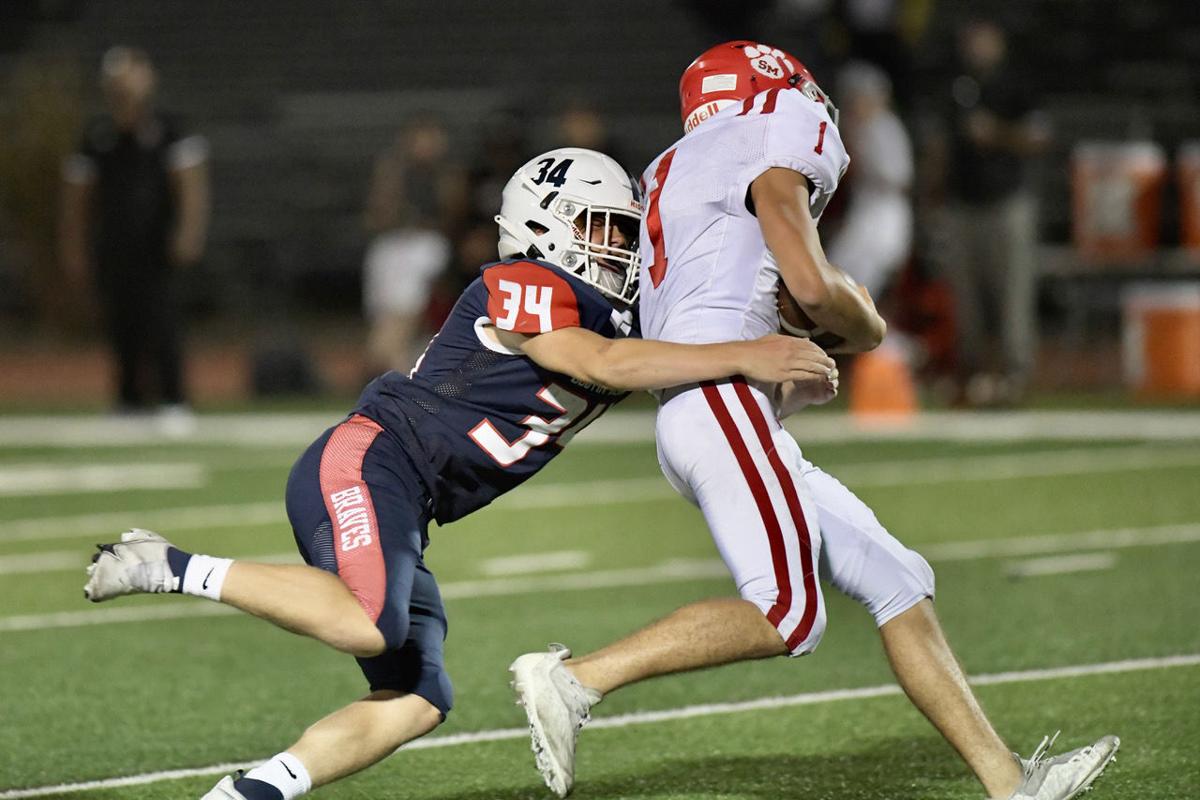 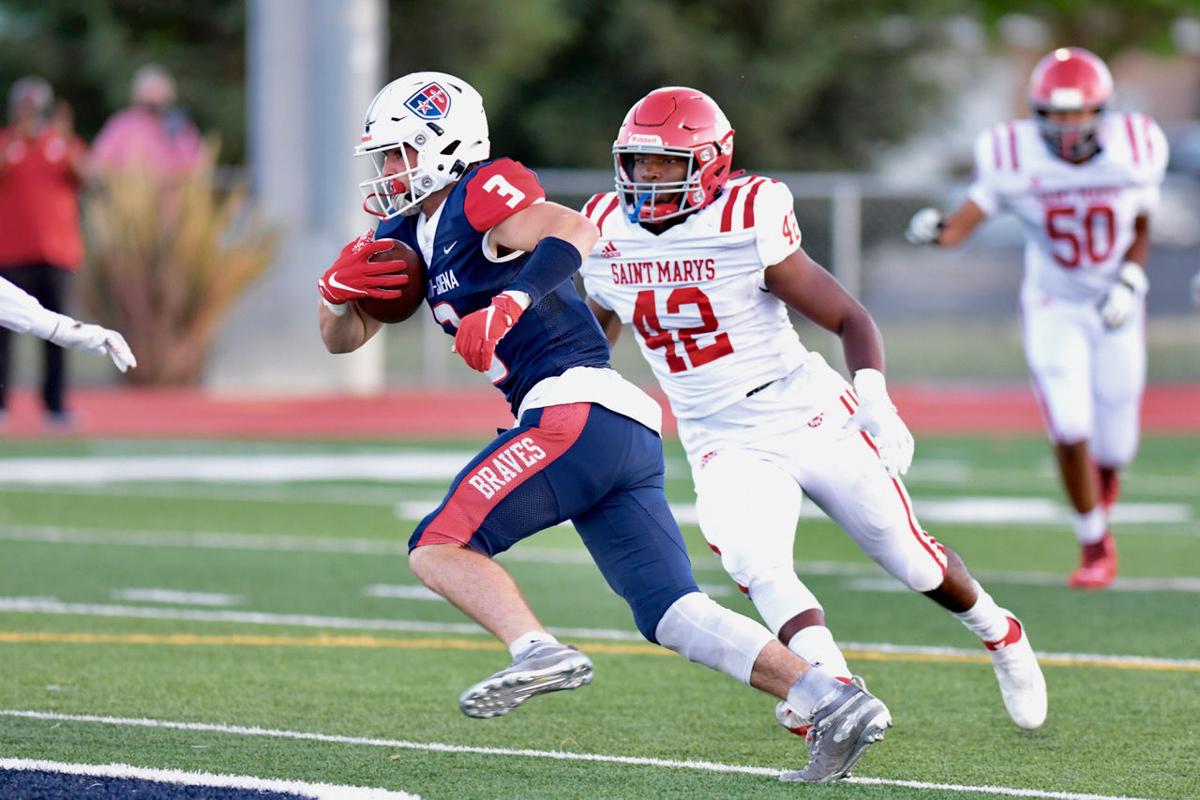 Justin-Siena's Robby Sangiacomo turns a short pass into a big gain against Saint Mary's on Friday night at Dodd Stadium. 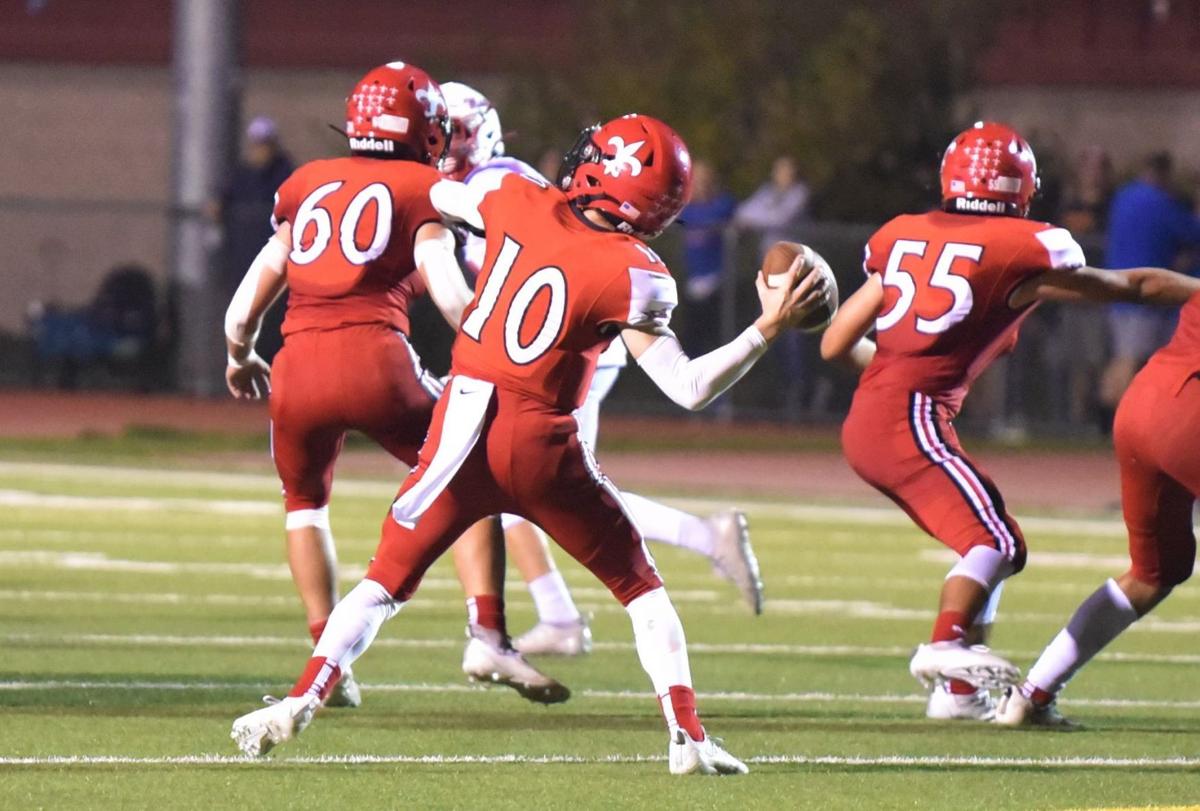 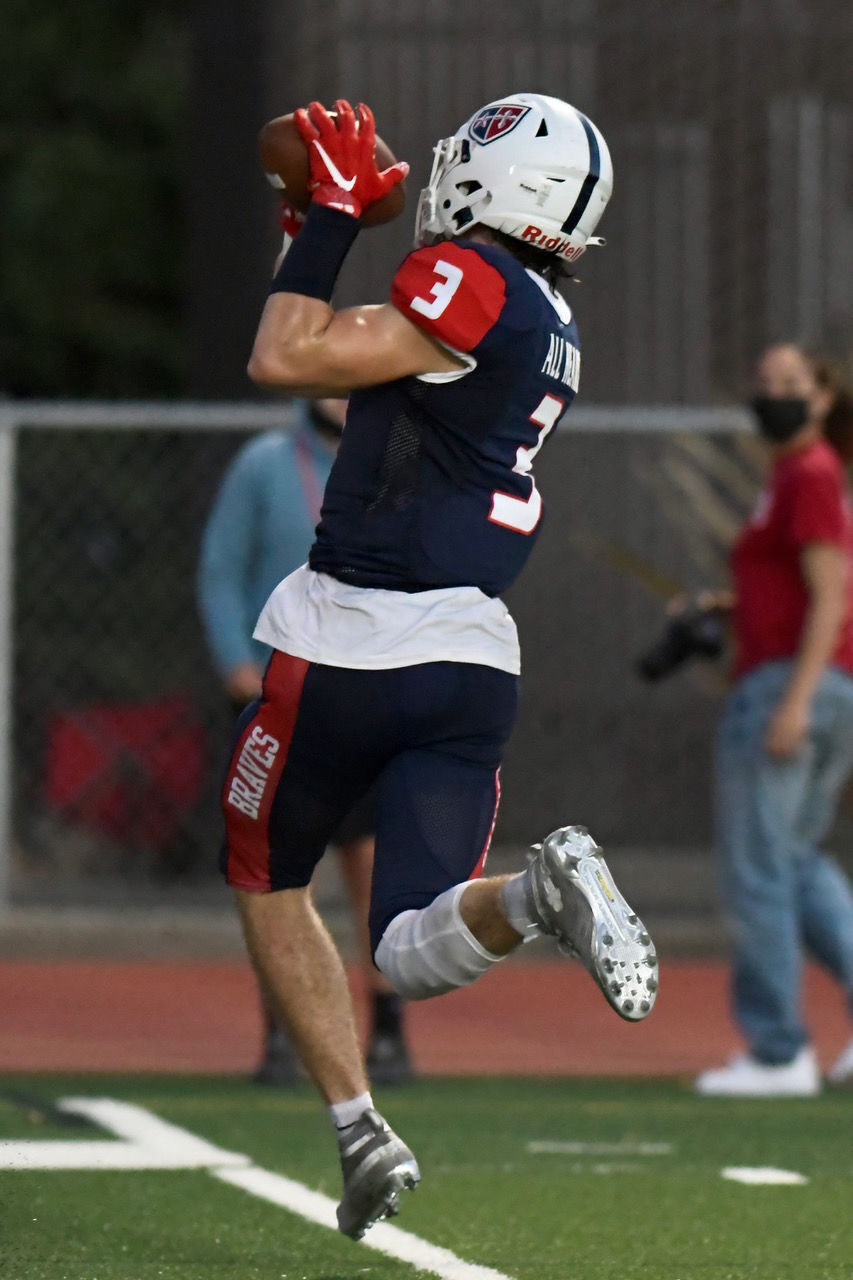 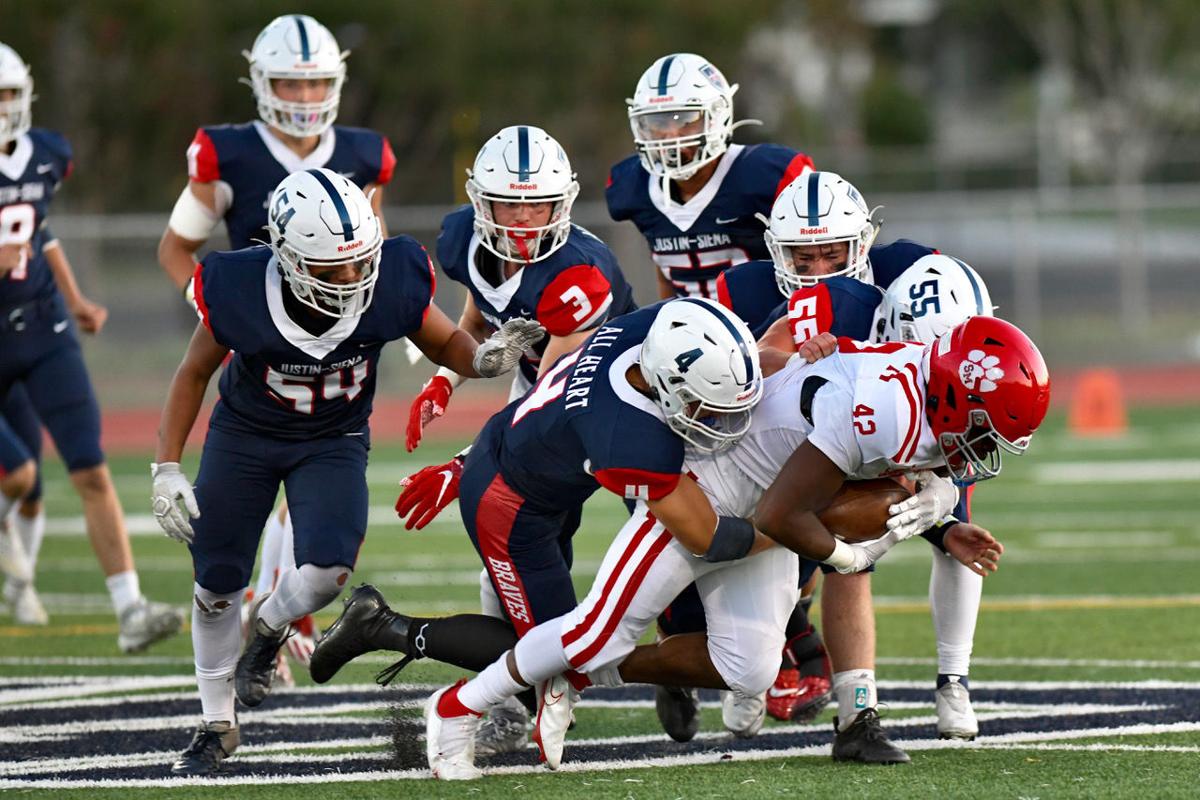 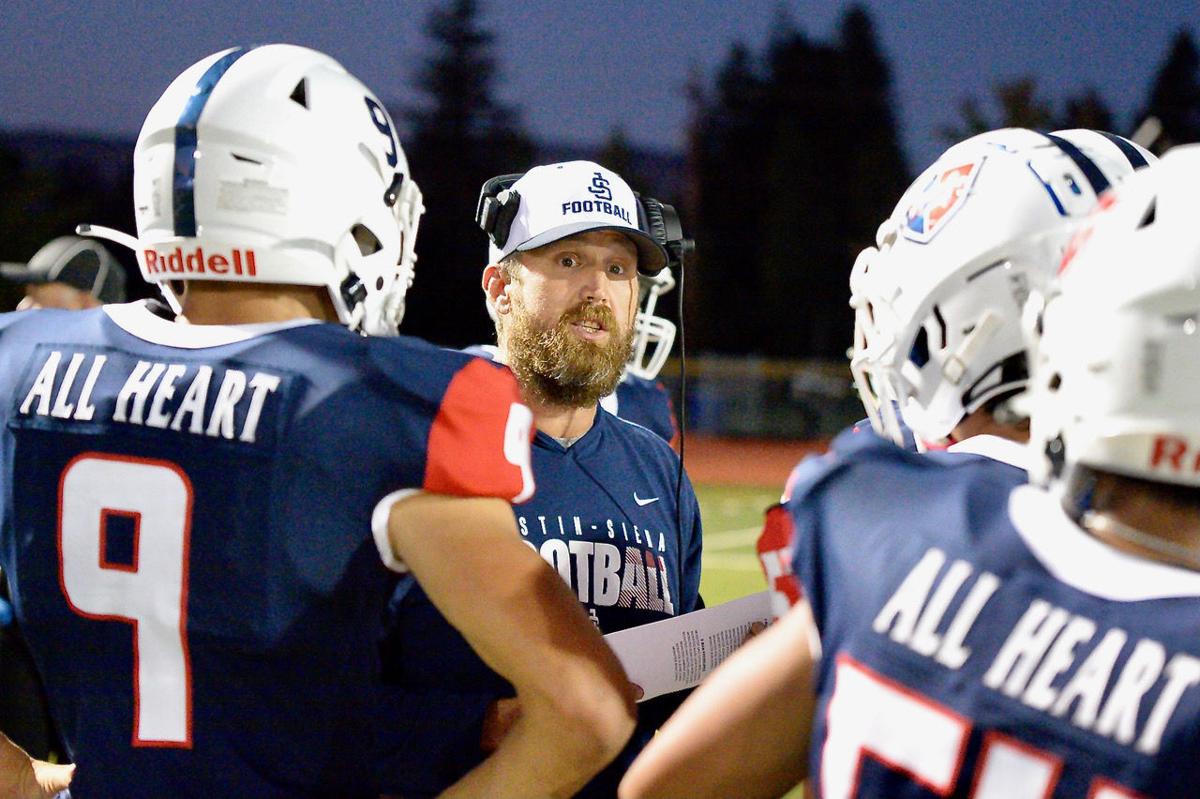 Justin-Siena head coach Brandon LaRocco talks to his team as it hosts Saint Mary's on Friday night at Dodd Stadium. 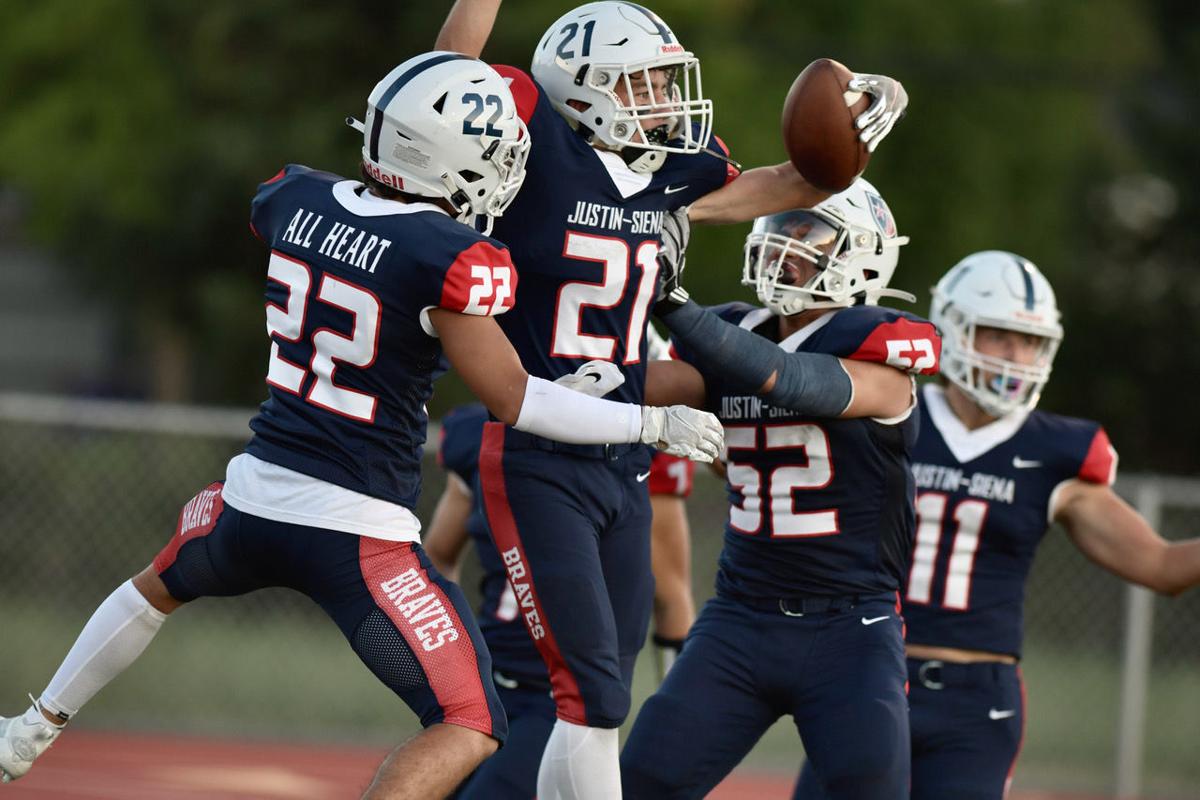 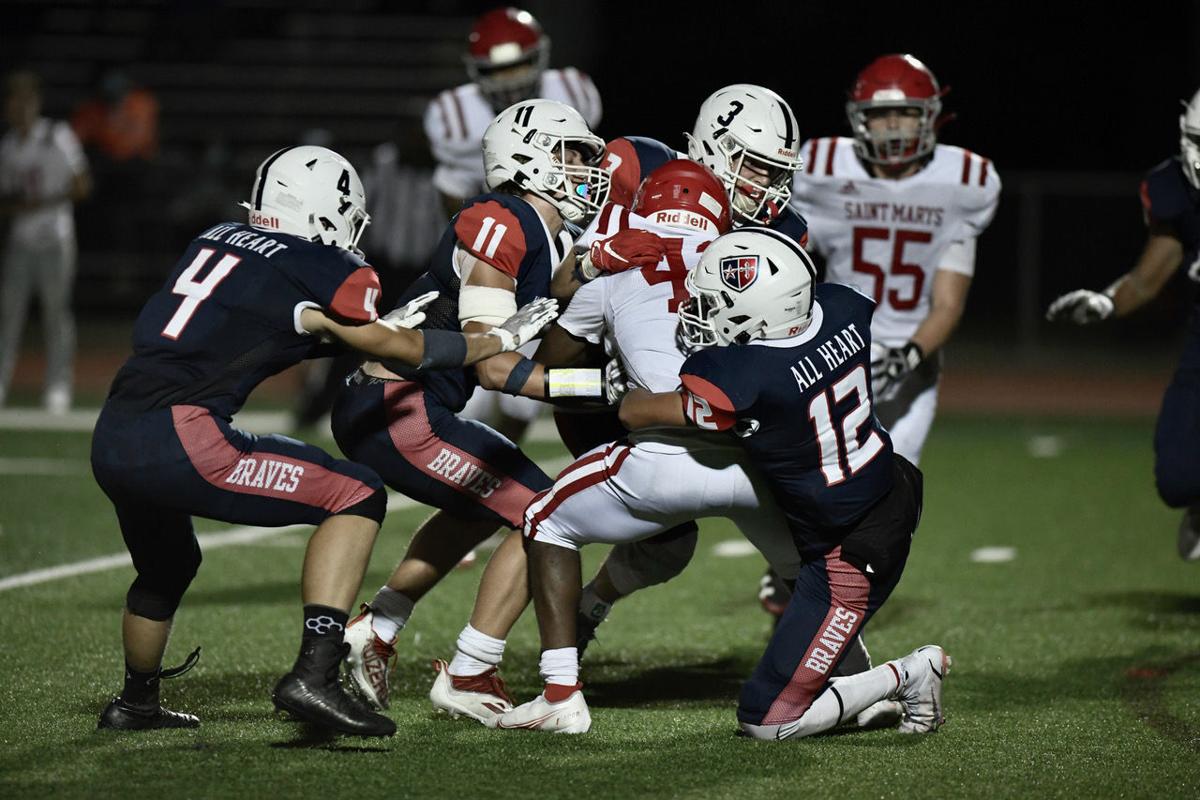 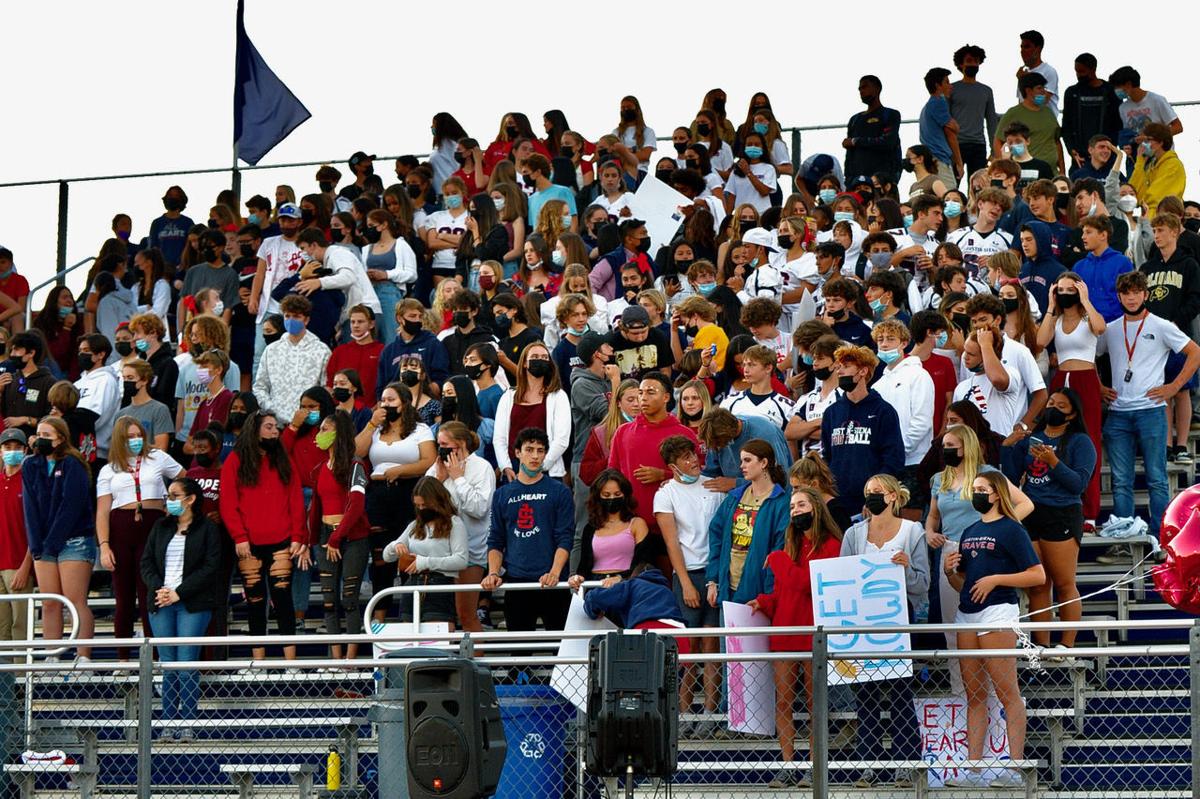 The stands at Justin-Siena's Dodd Stadium were packed for Friday night's game against Saint Mary's.

Getting that first win can be hard at times, but the Justin-Siena football team made it look pretty easy with a 34-0 victory over visiting Saint Mary’s of Albany on Friday night.

A big reason the Braves (1-2) were able to get their first victory of the season was their defense was all over the field at Dodd Stadium.

“I think we had a pretty good game plan in place,” Justin-Siena head coach Brandon LaRocco said. “I think we executed it pretty well. The kids played hard. This defense has a lot of upside. We’re not the biggest group, but we’re pretty athletic and we don’t mind getting physical, which is nice to see.”

They were also able to hold the Panthers (2-1) to just 25 yards on the ground. Through the air, they held them to 77 total yards. Justin-Siena collected four sacks on the night.

“We always like big plays in the backfield — tackles for losses, sacks and takeaways,” LaRocco said. “I don’t think we had a ton of takeaways tonight, but we forced a couple of fourth-down losses.”

For Justin-Siena, it was also nice to get an offensive breakthrough after being staggered in the previous Saturday’s 36-16 loss at Archbishop Riordan in San Francisco.

“Something was holding us back and this week we got past that,” Justin-Siena senior running back Caden Parlett explained. “So now, it’s only up from here.”

The first score of the game came with 8:03 left in the first quarter, when Parlett found the end zone on a 22-yard run. He scored once more in the game on a 12-yard run at the 5:37 mark of the fourth quarter.

“I was just having fun,” he added. “I’ve got to give props to my line. Can’t do it without them. I just seen the field well. I had a fun night.”

“Caden is a hell of a football player,” LaRocco said. “The kid is a competitor. He slips and avoids collisions really, really well, and I think that gives him an advantage. He's deceptively hard to bring down. People see how big he is, but he doesn’t go down. He just kind of finds a way to kind of keep strumming and keep fighting.”

Also adding to the scoring was dual-threat signal-caller Zach Zurowski. With 6:42 left in the first half, he found fellow senior Robby Sangiacomo for a 21-yard connection. Then, with 1:11 left in the game, he scampered into the end zone on a 9-yard touchdown run.

Zurowski ended the evening completing 9 of 14 passes and overcame two interceptions. Rushing-wise, he carried the ball four times for 29 yards and was sacked once.

The Braves also broke out some trickery in the game. After taking the handoff from Zurowski, Josiyah Maddalone found Eric Gutierrez along the sideline for a 63-yard touchdown pass.

The Braves were able to pick up their first win in their only home nonleague game. It was the first time they had played a game with a good-sized crowd in the stands since the fall of 2019.

“We had a great turnout tonight,” LaRocco said of playing in front of the home crowd. “The students were enthused. We haven’t played a home game with students at it since 2019. It was great energy tonight. The boys responded really well.”

The home cooking is short-lived for Justin-Siena. Next week, they’ll take a long trek to Grass Valley for a meeting with Bear River.

The 49ers' Biggest Matchup Disadvantage Against the Lions

Analyzing what the San Francisco 49ers' biggest matchup disadvantage will be against the Detroit Lions.

Justin-Siena's Robby Sangiacomo turns a short pass into a big gain against Saint Mary's on Friday night at Dodd Stadium.

Justin-Siena head coach Brandon LaRocco talks to his team as it hosts Saint Mary's on Friday night at Dodd Stadium.

The stands at Justin-Siena's Dodd Stadium were packed for Friday night's game against Saint Mary's.