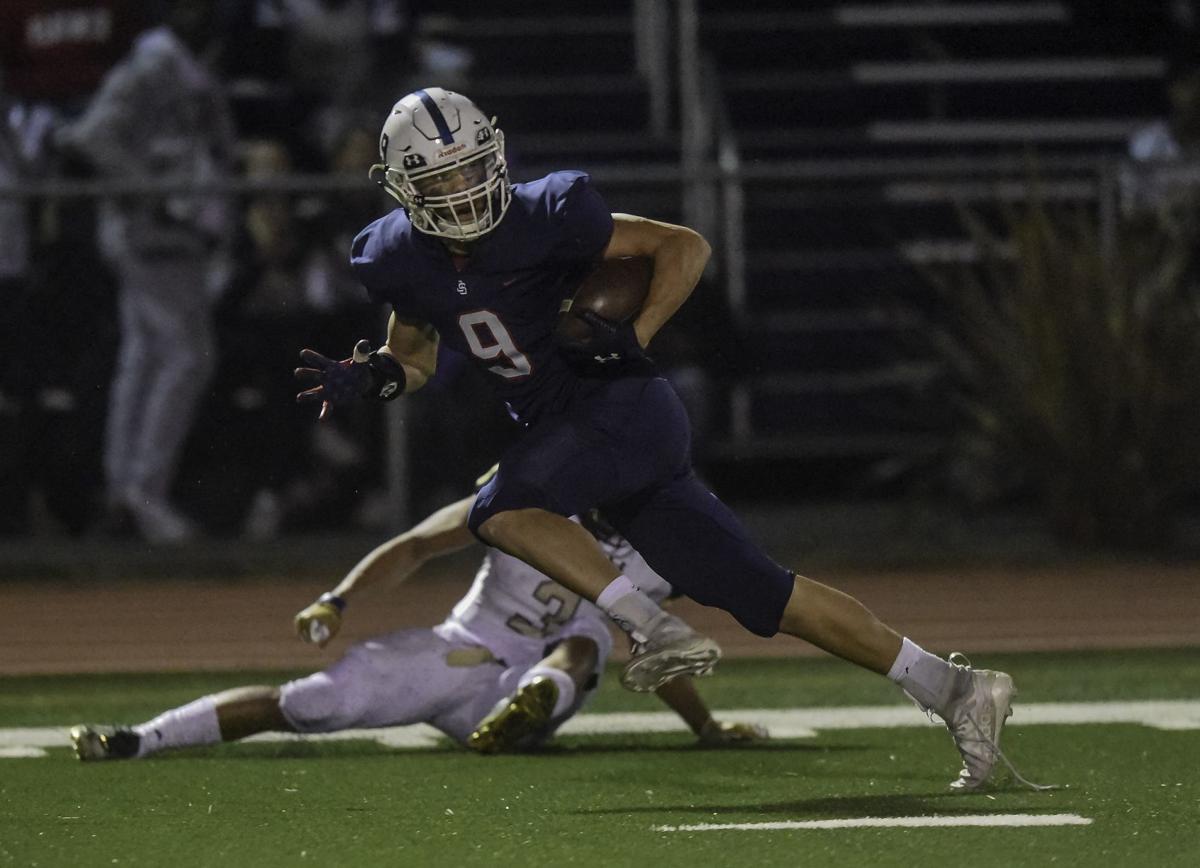 Justin-Siena wide receiver Miles Williams (9) breaks away from American Canyon's Kaave Gaviola (3) miss before taking it in for a touchdown Friday night. 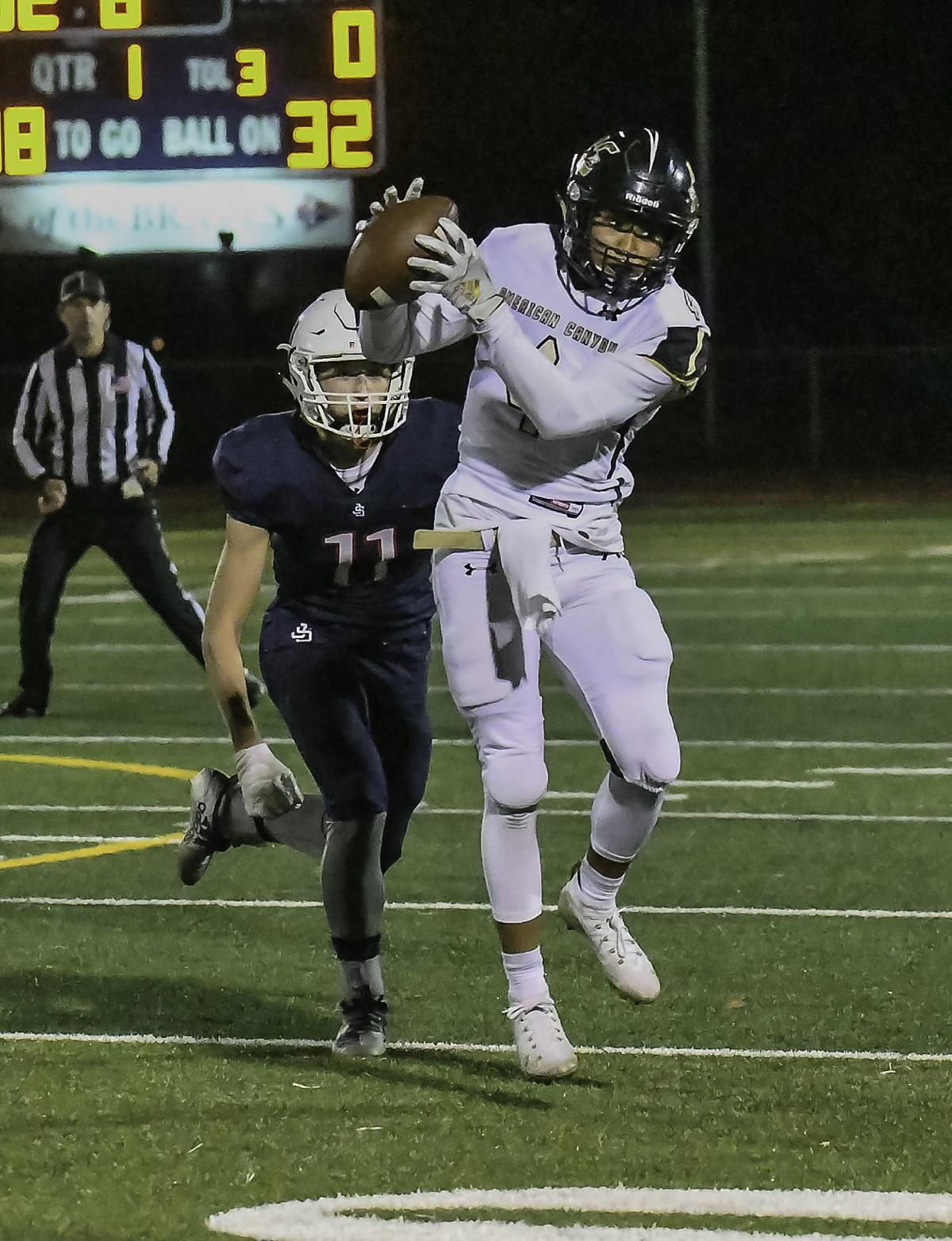 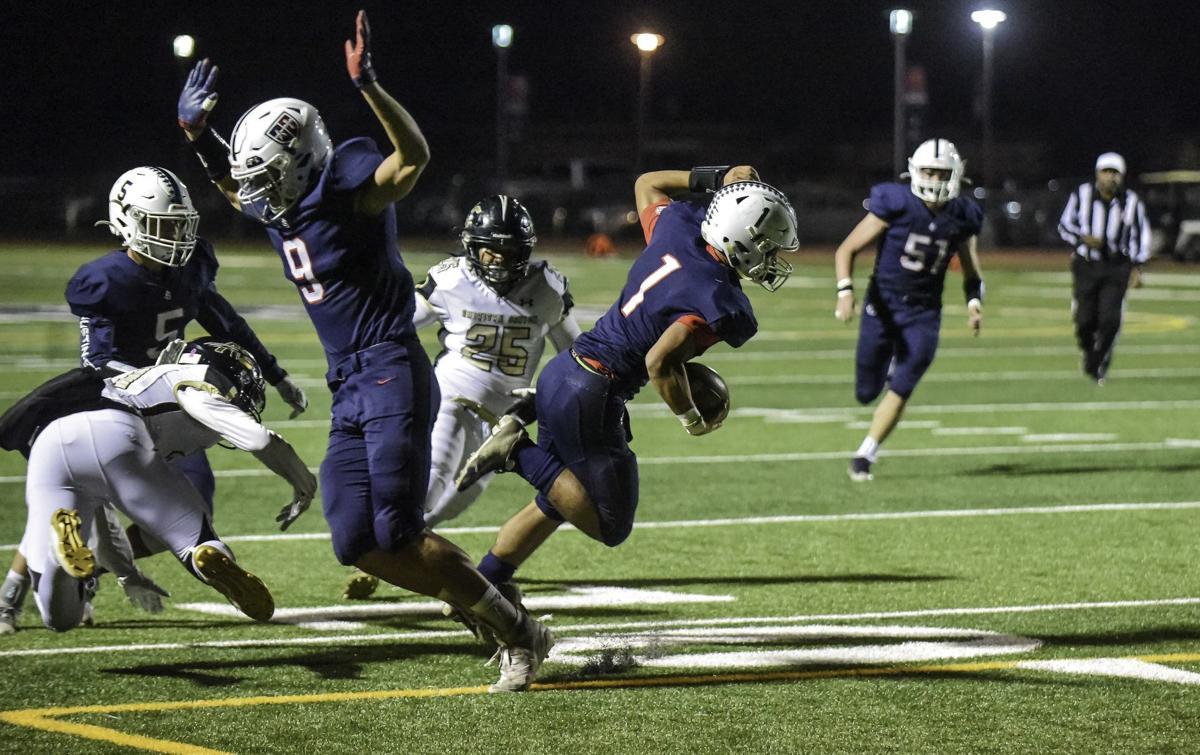 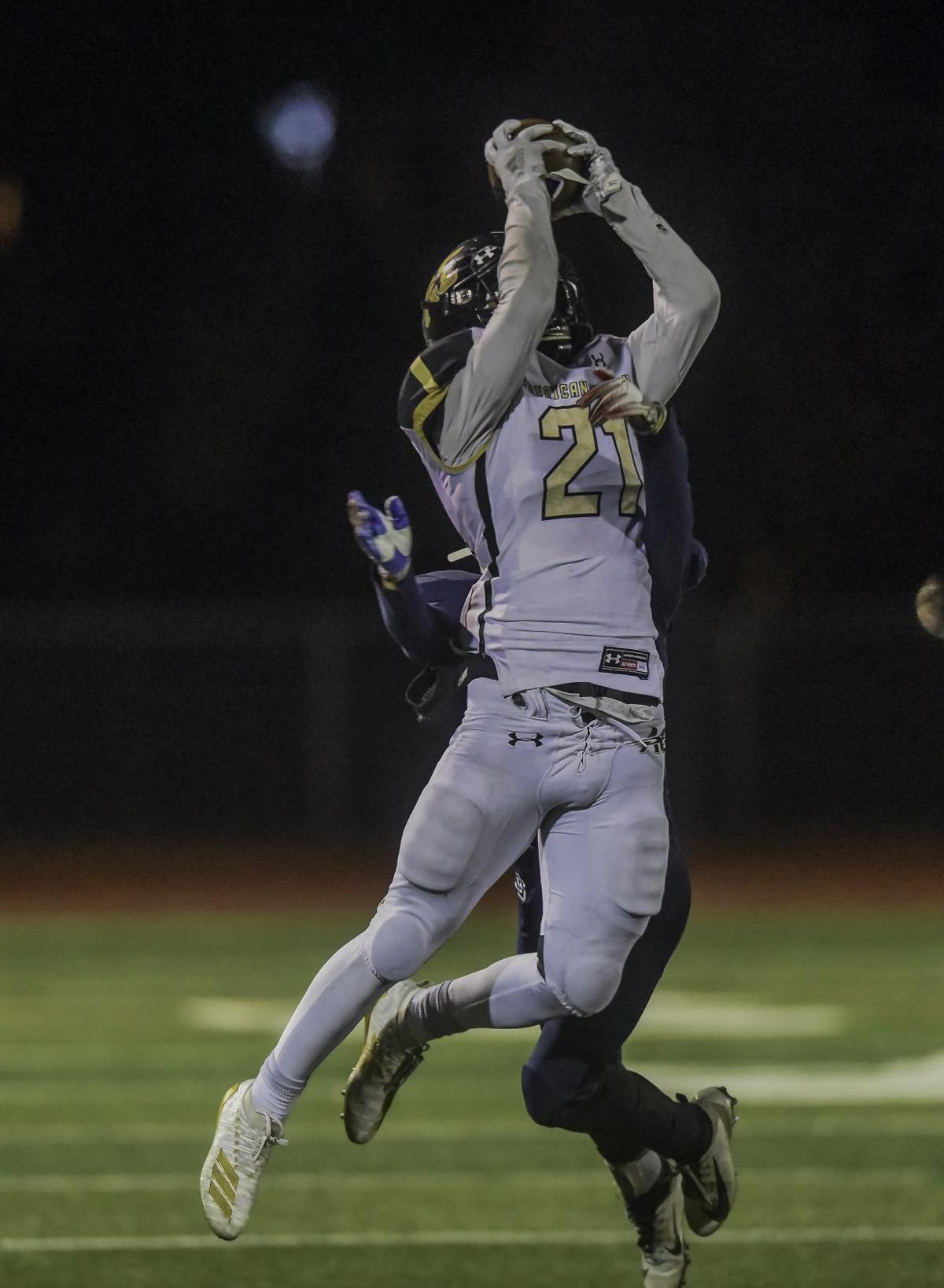 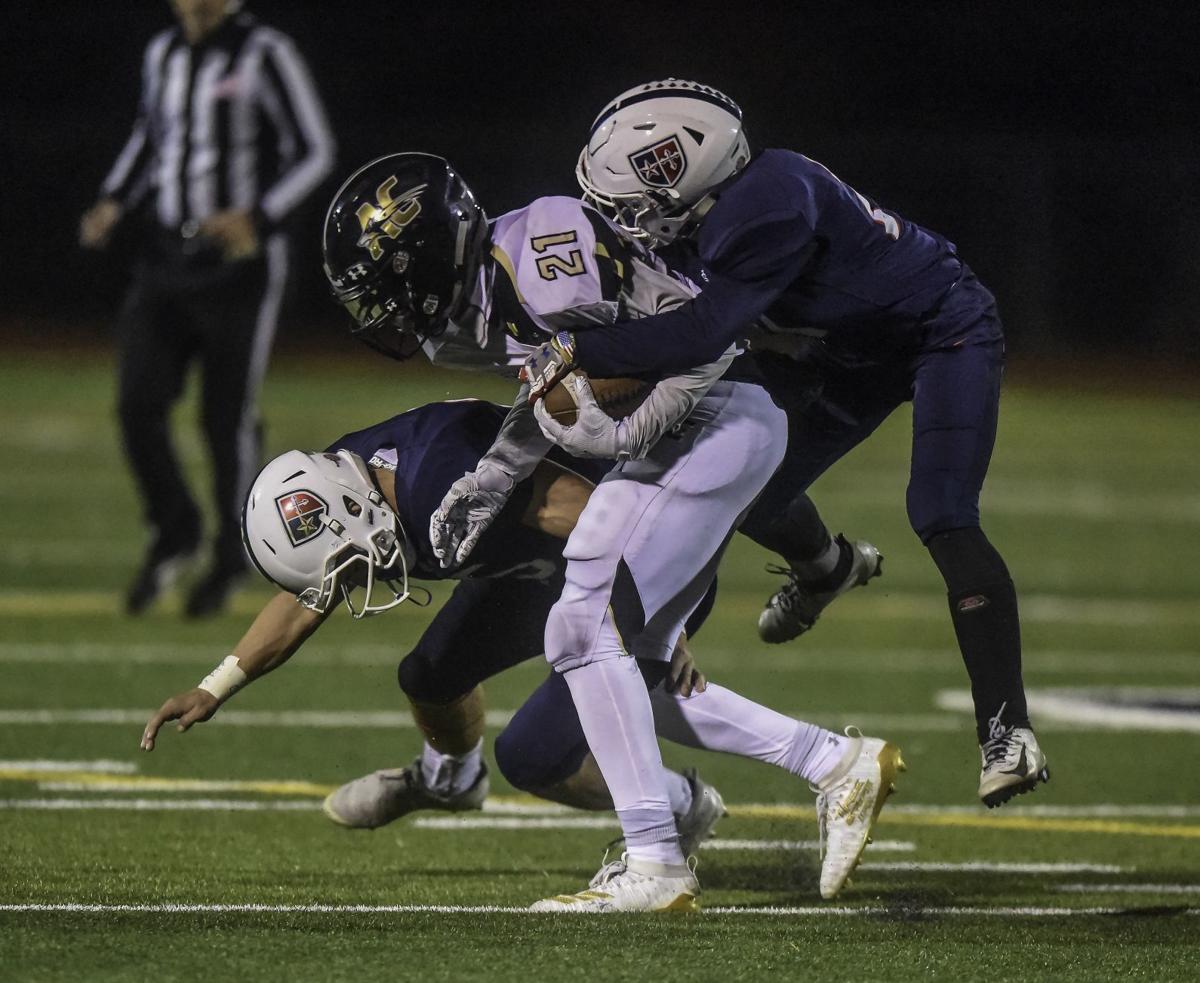 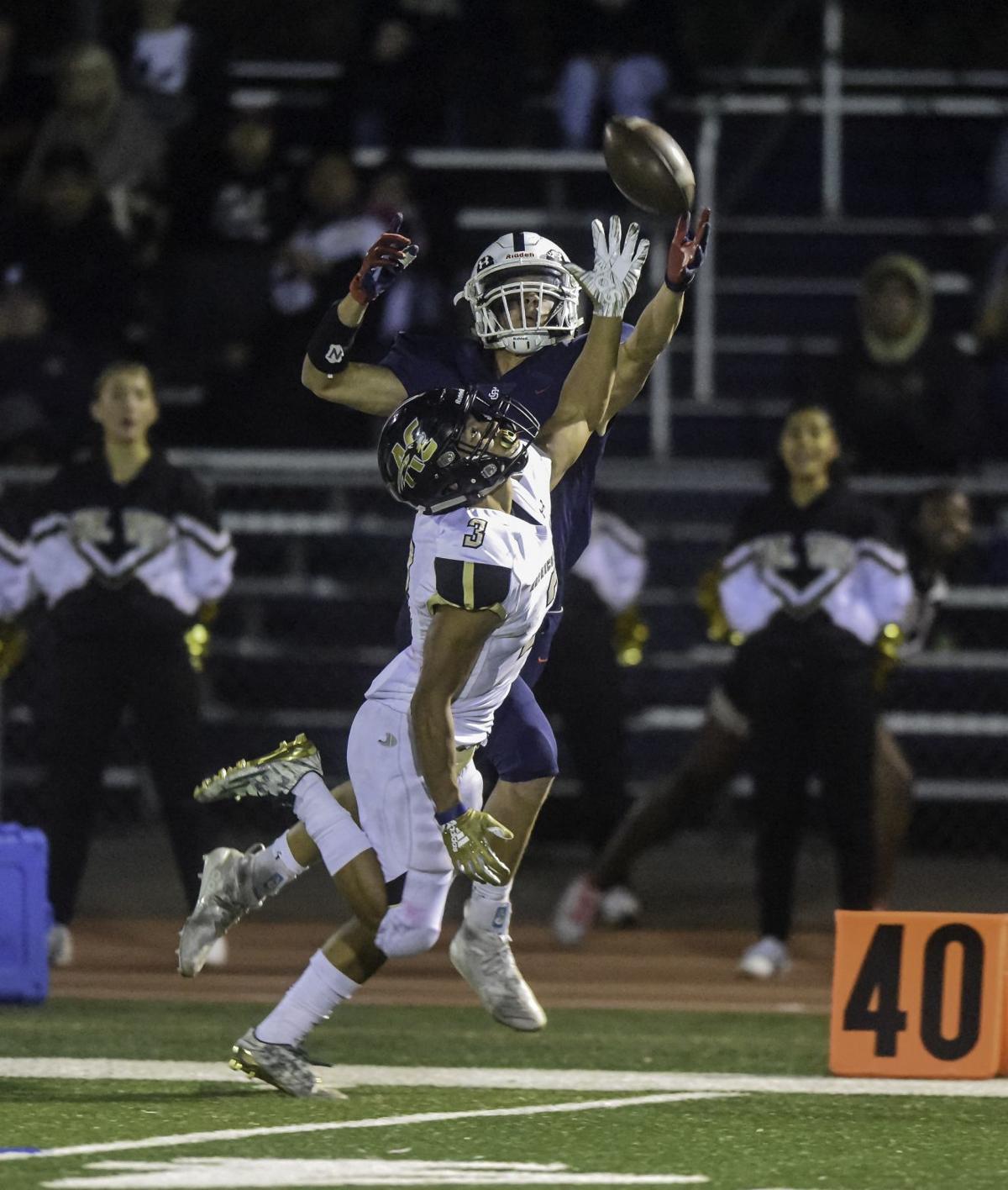 Justin-Siena's Miles Williams makes a one-handed catch over American Canyon's Kaave Gaviola near the sideline late in the first half Friday night. 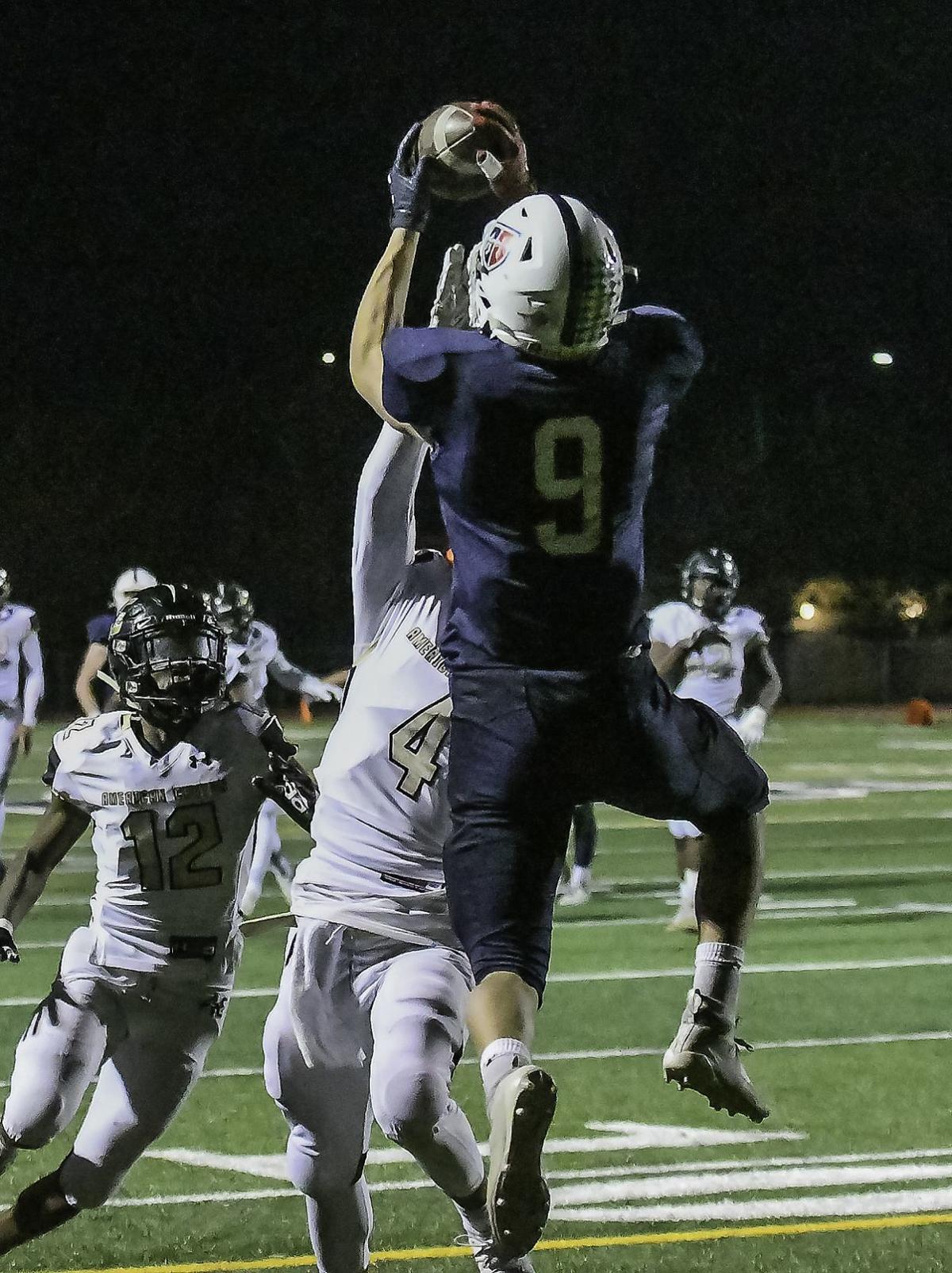 Justin-Siena wide receiver Miles Williams (9) breaks away from American Canyon's Kaave Gaviola (3) miss before taking it in for a touchdown Friday night.

Justin-Siena's Miles Williams makes a one-handed catch over American Canyon's Kaave Gaviola near the sideline late in the first half Friday night.

The Justin-Siena football team delivered some early haymakers that allowed the Braves to prevail over visiting American Canyon, 17-10, on Friday night at Dodd Stadium.

Justin-Siena finished 3-3 in Vine Valley Athletic League play and, at 7-3 overall, seriously bolstered its cause in getting at least one home game for the North Coast Section Division 4 playoffs.

American Canyon (8-2, 4-2 VVAL) is vying for a spot in the NCS Division 3 playoffs, but the thought of having a home game took a hit. The teams must wait until next weekend to learn of their fates after several regular-season games were rescheduled for next week due to school closures, evacuations, power outages and unhealthy air caused by the Kincade Fire in northern Sonoma County.

Justin led 17-0 after one quarter as quarterback Hudson Beers fired two touchdown passes – one from 19 yards away to Solomone Anitoni and another that covered 76 yards of real estate to Miles Williams – and Fabio Marx connected on a 21-yard field goal in between.

“When you are playing teams that are physically larger than us, it’s important to get points on the board early,” Braves head coach Brandon LaRocco said. “That way they can’t just hammer the ball down our throats the whole ballgame. We wanted to throw the first punch and I think we did a good job of that.”

“You have to do your job and play your techniques, but that first half is when the ‘my bad’ in practice showed,” Wolves head coach John Montante said. “You don’t rise to the occasion, you fall to the level of your preparation.”

At various times, it looked like Justin would turn the game into a laugher. But the Wolves’ defense rose to the occasion with two first-half takeaways – a Derrick Conner fumble recovery and a Kekoa Wilson interception. Kaave Gaviola later joined Wilson on the interception front.

American Canyon did not turn those thefts into points, however, staying remotely in the game as a result. Still down 17-0 at halftime, the Wolves had what appeared to be a ready-made order to start the second half. Ezekiel Anderson, who led the Wolves with 81 yards on six carries, raced 58 yards to paydirt to cut the lead to 17-7 with 9:00 left in the third quarter.

Appearing re-energized, American Canyon’s defense forced a punt after three downs on the next series. But its offense managed only a 32-yard Alex Llamas field goal, which doinked the crossbar and went over to make it 17-10 with 1:28 left in the game. It proved to be too little, too late.

LaRocco spoke glowingly about his defense’s discipline against an athletic Wolves offense. Although American Canyon gained 288 yards of offense, it took the Wolves 61 plays to get there.

“When you play a quarterback with the option-run game, being assignment sound is the only way you can be successful,” LaRocco said of American Canyon signal-caller Vance Eschenburg. “I’m very proud of them, especially on fourth down. We had a couple big stops.”

On the other sideline, Montante was as mystified with his team as LaRocco was proud of his.

“I think for some reason our guys thought they were going to run over this team,” he said. “Justin is a well-prepared team. They execute well. We decided to play in spurts and it bit us tonight.”

On the American Canyon side, Ronald Hamilton had a quarterback sack. Croix Stewart, Wilson, Jordan Fisher, Devin Davis, and Jeffery Brown each had a stuff. Conner had two impact tackles, and Wilson, Stewart and Hamilton each had one.

Though the loss was a disappointment for the Wolves, Montante added that the team would need to hit the reset button immediately.

“We have business to take care of,” Montante said. “We have a bye week that will be good for us. We have to learn because life is a very hard teacher.”

For LaRocco, the win was satisfying because it came on Senior Night. LaRocco is in his fourth season at the helm after replacing the extraordinarily successful Rich Cotruvo. For these seniors, LaRocco is the only Braves head coach they have known.

“I’m really excited for them,” LaRocco said. “The seniors have really established who we are. I’m really proud of the way they committed to this team and the endeavor we are embarking on. We told them we are fighting for another home game. We feel pretty confident now that we could get a home game in the first round and maybe even the second round.”

James Aken scored the Wolves’ touchdown from 10 yards out, but the two-point conversion pass from Roman Webb to Trenton Angold that followed proved to be the winning points. That was because the Braves, after scoring on a 7-yard pass from Zachary Zurowski to Timothy Walsh, came up short on their own two-point conversion.

The Wolves dominated the game statistically, outgaining Justin 289-68 in total yardage. But three Braves takeaways kept the game close, as Aidan Cushing and Robert Sangiacomo each recovered a fumble and Isen Emana intercepted a pass.

Defensively for the Wolves, Dalano Murray had a sack and a stuff, and Ren Ducut added a stuff. Ryan Landaverde had two impact tackles, and Ducut, Murray and Aken each had one.

For Justin, Nicholas Andrews had a sack, and Braden Snoke had three stuffs. Sangiacomo and Cushing each had three impact tackles, Bryce Laukert, Cole Chatagnier, Andrews and Snoke each had two, and Gianni Natuzzi and Emana had one apiece.