Become a Member
Read Today's E-edition
Share This
Napa Valley Prep Football: Justin-Siena runs out of gas in 53-27 loss at Casa Grande
Share this
1 of 3 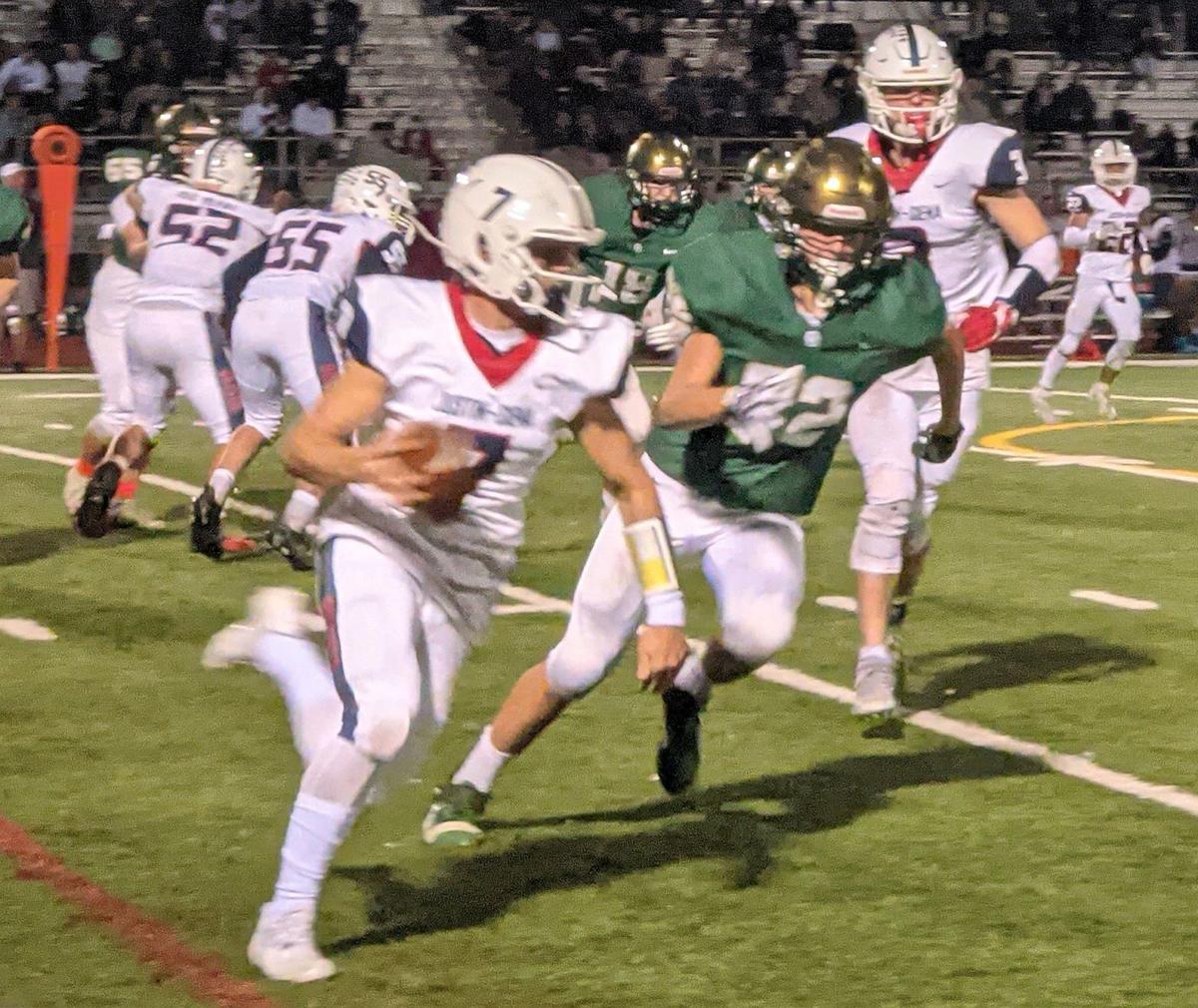 Justin-Siena quarterback Zach Zurowski (7) sprints around the right side against Casa Grande on Friday night in Petaluma. 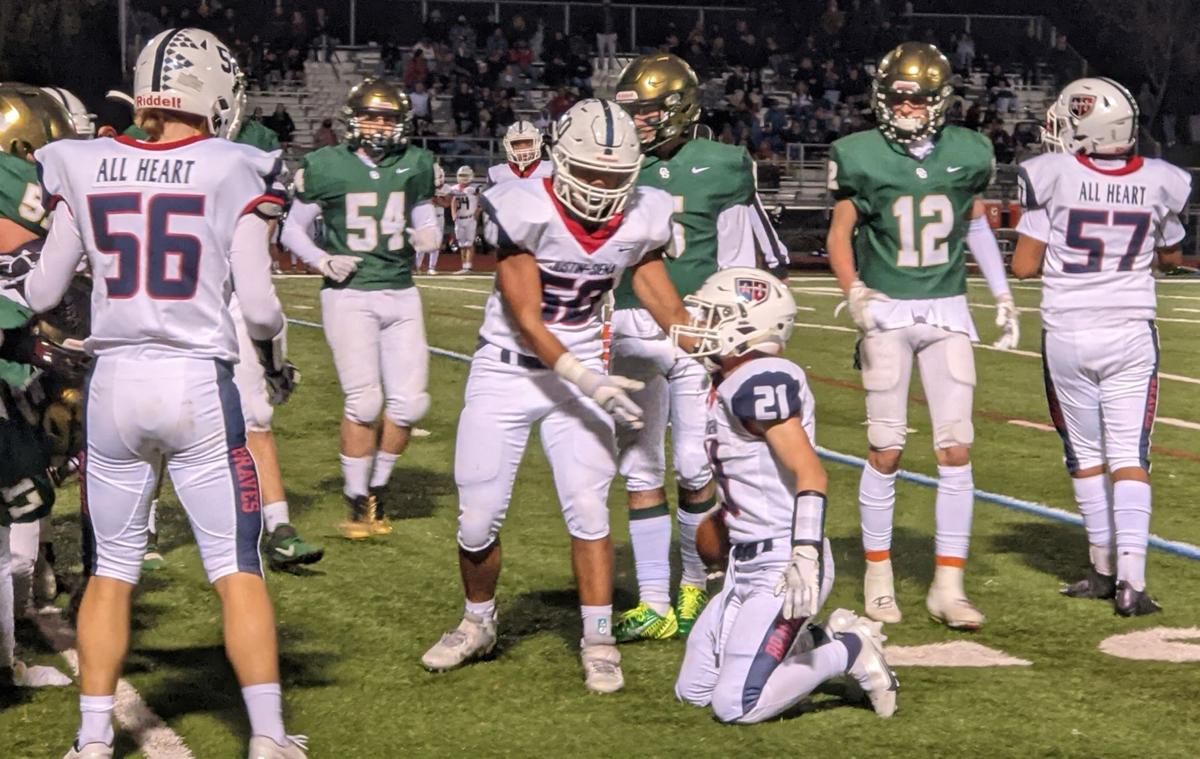 Justin-Siena running back Caden Parlett (21) is helped up by tackle Sam Gomez (50) during the Braves' league finale at Casa Grande on Nov. 5. 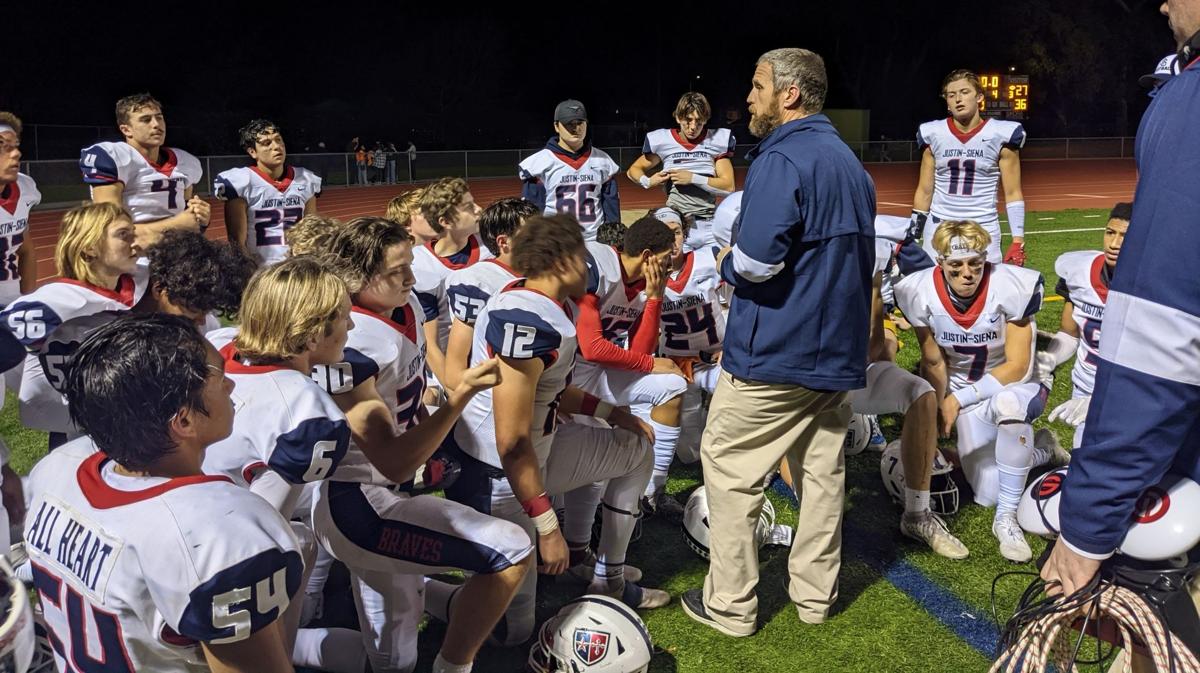 PETALUMA — Justin-Siena came into Friday evening’s football clash at Casa Grande in a spoiler role, trying to keep the Gauchos from sharing the Vine Valley Athletic League title with Vintage.

The Braves went toe-to-toe with one of the most prolific offenses in the North Bay for nearly two full quarters, but Casa Grande shut them out in the second half of a 53-27 victory on its Senior Night.

The opening quarter set a pace that would have set school records if it had continued, as the sides combined for 46 points in the frame.

Gauchos quarterback Jack Porteous has been one of the top signal callers in the North Bay this season, having set the greater Bay Area single-game passing record with more than 700 yards at Maria Carrillo in their opener. The senior was on pace to break that record after connecting with Shane Runyeon for a 58-yard touchdown pass on the second play of the game.

But Casa Grande failed on the two-point-conversion — as it also would after its next two scores — and Justin-Siena countered with some trickery. After quarterback Zach Zurowski handed off a couple of times, he gave the ball to tight end Robert Sangiacomo to heave downfield to a wide-open Miles Martin for a 69-yard scoring strike. A blocked extra point kept the score tied at 6-6.

“I’m really proud of the way our offense played tonight. Zach had a really great game and we used a little bit of trickery to get some stuff done,” Justin-Siena coach Brandon LaRocco said. “We try to be creative because we know (most opponents) are going to be bigger than us and have more players than us. I am really proud of how our offense played in the first quarter. It was just spectacular.”

Each offense seemed determined to score quicker than the other, as Porteous then found Caden Cramer down the left sideline for a 61-yard touchdown pass and 12-6 lead. Justin-Siena took its first lead of the contest on the following drive, as Caden Parlett took a jet sweep around the left side of the offensive line and found a hole. The senior burst his way for a 71-yard touchdown rush and Sangiacomo hit the extra point just a little to make it 13-12 just over four minutes into the game.

The Gauchos regained the lead on a 13-yard Porteous touchdown pass to Marcus Scott, 18-13, and had a chance to keep Justin-Siena from responding when it faced fourth down and 9 at the Casa Grande 40-yard line. But Zurowski rolled out to his right and connected with Martin on a a 40-yard touchdown strike to regain the lead, 20-18.

It would be short lived, as Porteous notched his fourth touchdown pass to favorite receiver Runyeon on a 29-yard pass with just 6.7 seconds remaining in the quarter. Porteous took a quarterback keeper up the middle for two on the conversion for a 26-20 advantage. Porteous was on pace for a 1,000-yard passing night after racking up 248 yards in the opening quarter. But the Braves slowed him down after that as he finished with 489 yards and six touchdown passes.

The second quarter started strong for the Braves, as Zurowski connected with Parlett on a 71-yard touchdown pass for a 27-26 lead a minute into the frame.

The way each team was scoring, it seemed only defense would turn the momentum. That’s what Casa Grande got the rest of the night.

One play after Ryder Jacobson put the Gauchos up 33-27 on a 11-yard rushing touchdown, they sacked Zurowski. A bad snap then put the ball on the ground and the Gauchos jumped on the loose ball. Porteous wasted no time capitalizing on the fumble, connecting with Scott on a 9-yard touchdown pass to push the hosts’ advantage to 40-27.

“I think when you get in a shootout like that, it is apparent that whoever gets the first stop or whoever gets the most stops is going to end up being on top. When they did stop us, it did deflate us a little bit,” LaRocco said. “I will say for giving up 40 points in the first half, we only gave up two touchdowns in the second half. They have a lot of firepower over there and it’s about not letting the last drive affect you.”

After the fumble and getting stopped on the following drive, the Braves offense was never able to regain that full-throttle energy.

Parlett still finished with 120 rushing yards on 15 carries in defeat.

The regular season is complete for the Braves, but the postseason will be next. LaRocco’s side is projected as a top-three seed in the North Coast Section Division VI playoffs.

“It’s just good to be in the playoffs again after having no playoffs and a six-game season in the spring,” the coach said. “We play for the postseason and that’s a tradition here. We’re a postseason team. So it will be nice to get into our division to play schools that are our size, but there's some good schools there, too, so we don't take anything for granted.

“We know that we can play with some really good football teams, so we just have to continue to work and execute our scheme and our technique and keep getting better.”

Justin-Siena’s offensive highlights included quarterback Drew Sangiacomo’s 16-of-31 passing for 206 yards and a touchdown. He also threw three interceptions, but spread to ball to five different targets. His longest completion was 38 yards to Bene Sebastiani, who led the Braves with six catches for 87 yards and a touchdown and a two-point conversion catch. Jason Gray had five catches for 65 yards, Marco Barbosa two catches for 40 yards, and Gino Wood two catches for 17 yards. Dallas Logwood added 47 hard-earned yards and two touchdowns on 14 carries.

Justin-Siena quarterback Zach Zurowski (7) sprints around the right side against Casa Grande on Friday night in Petaluma.

Justin-Siena running back Caden Parlett (21) is helped up by tackle Sam Gomez (50) during the Braves' league finale at Casa Grande on Nov. 5.