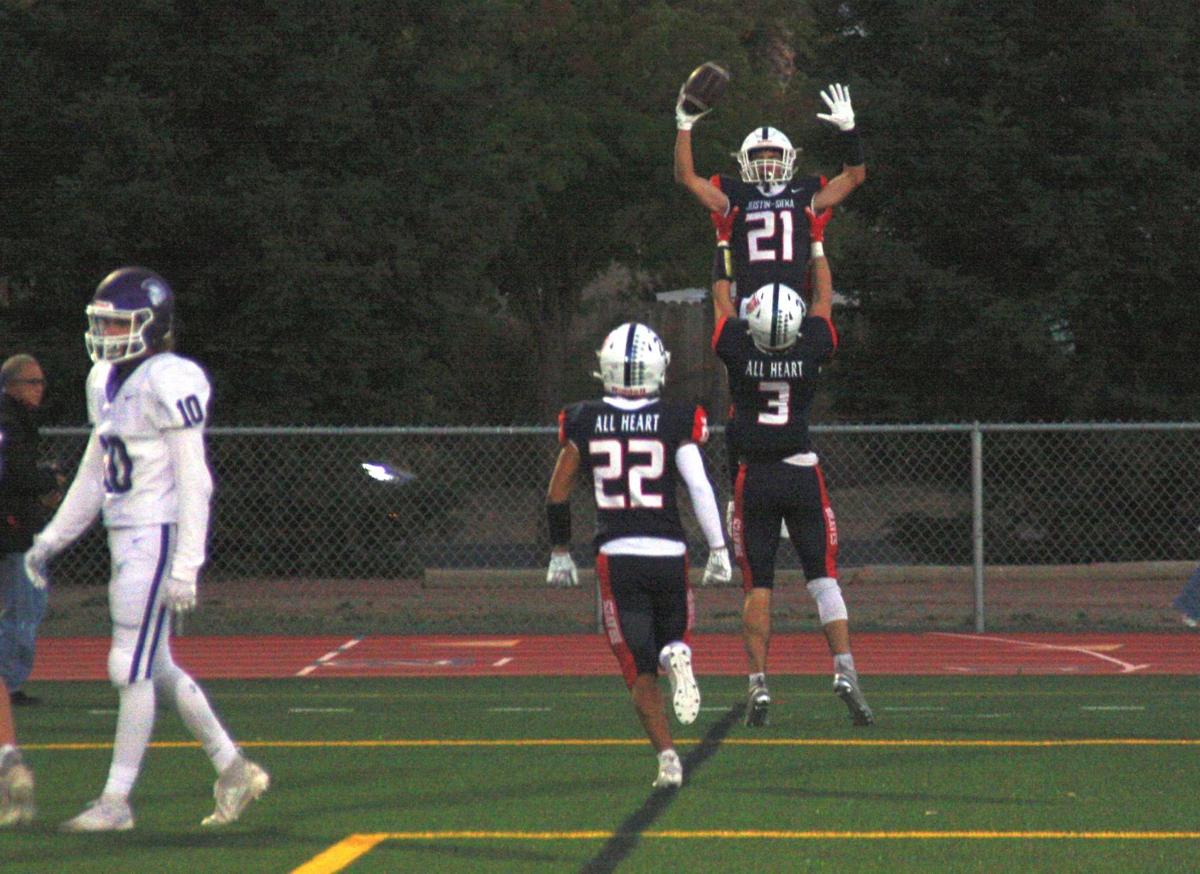 Justin-Siena's Caden Parlett is lifted by Robby Sangiacomo after scoring as Eric Gutierrez (22) joins them and Petaluma's Doren Shaw walks away Friday night. 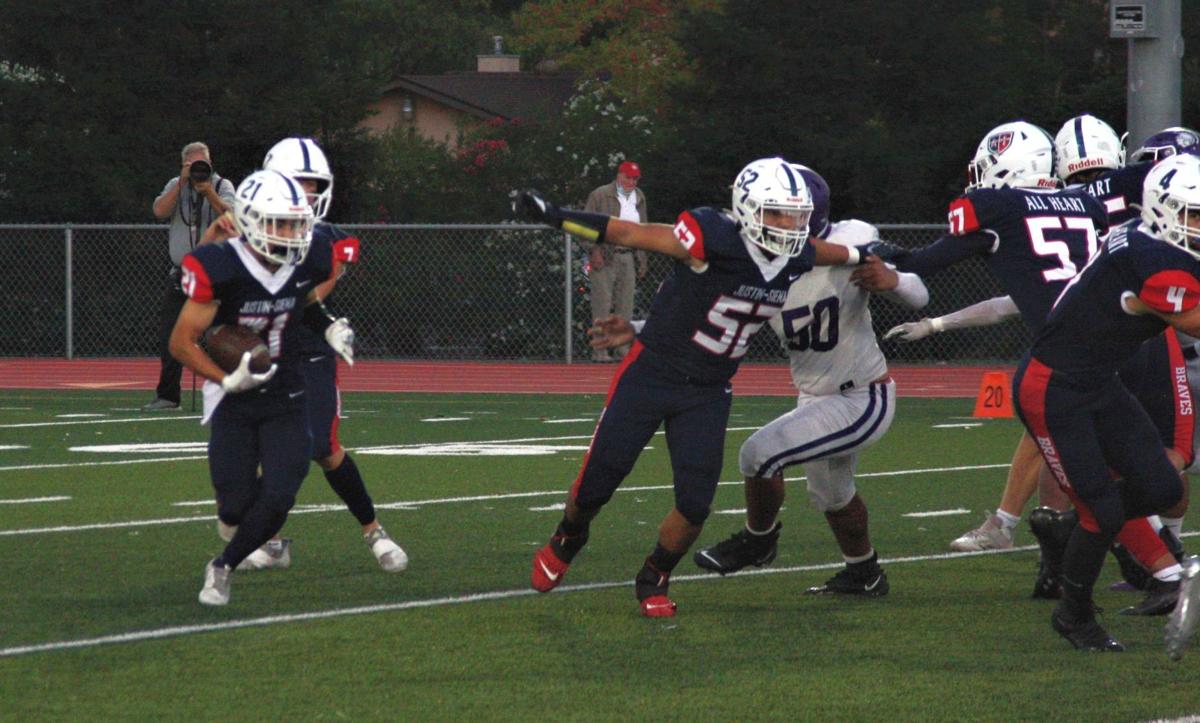 Justin-Siena's Caden Parlett takes a handoff as Giancarlo Guerrero (52) blocks for him against Petaluma on Friday night. 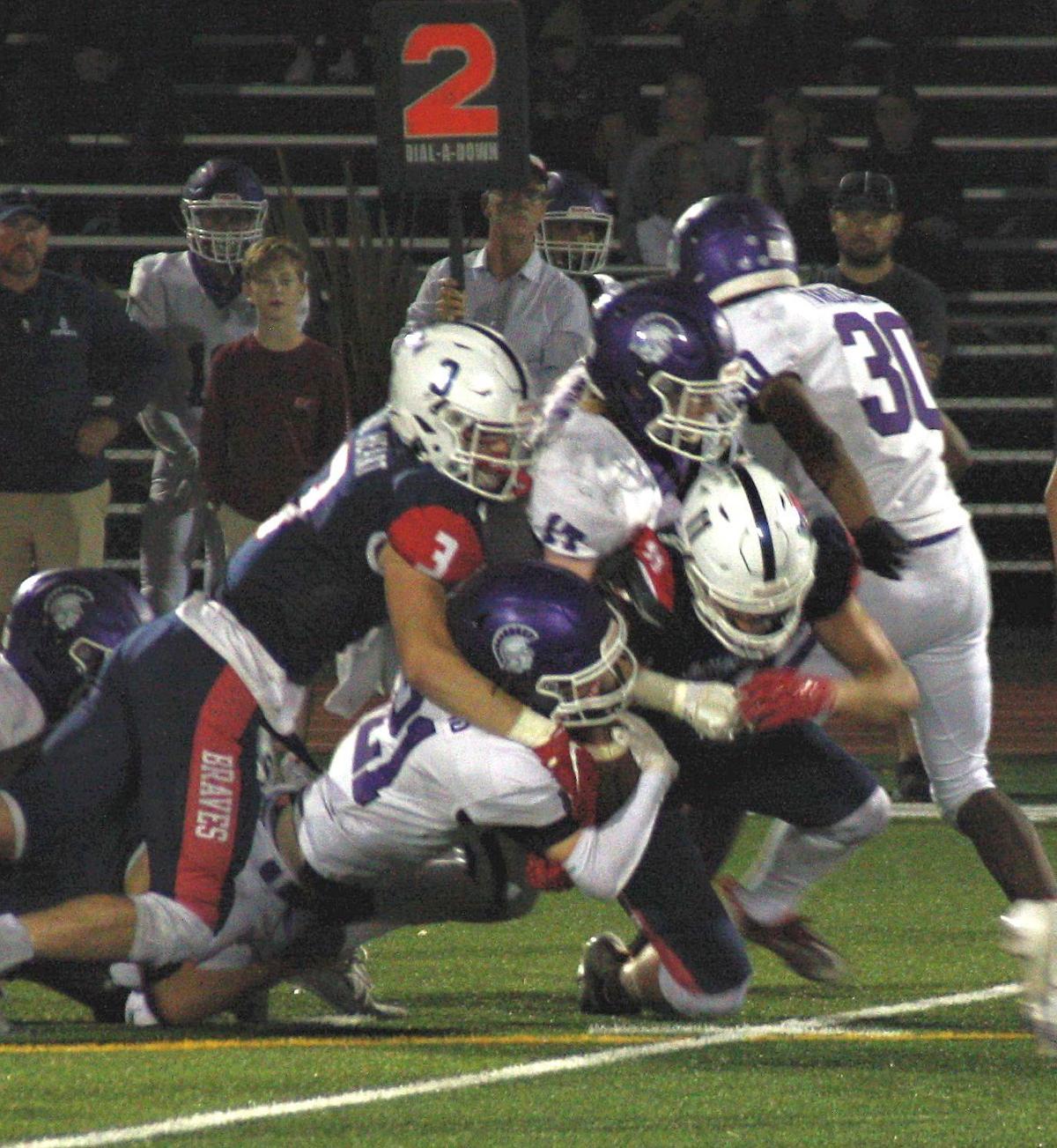 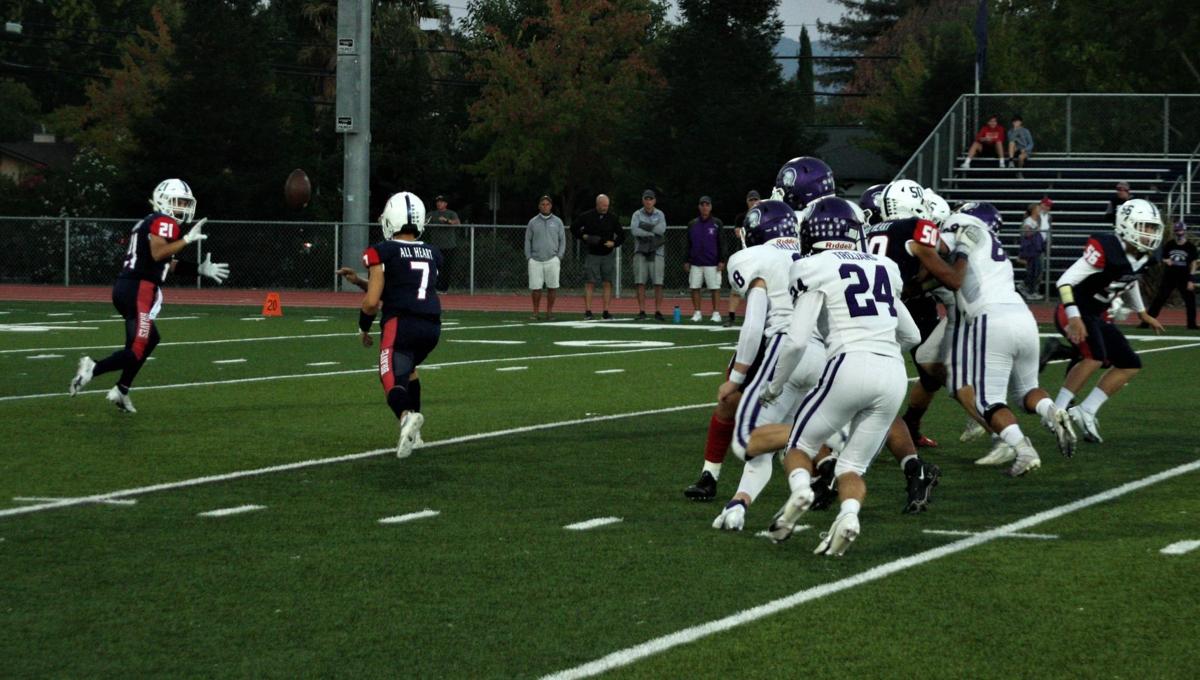 It hurts when you lose at the end of a football game.

Justin-Siena found that out Friday night when Petaluma sophomore kicker Asher Levy sent a 24-yard field goal through the uprights as time expired to lock up a 24-21 victory in each team’s Vine Valley Athletic League opener.

Petaluma (5-0 overall) just turned in a cleaner performance than the Braves (2-3 overall) did in their homecoming game at Dodd Stadium.

Before it came down to the final-second field goal, the Braves had their own chance to win after recovering a fumble. On that drive, however, they lost 26 yards due to penalties and a bad snap.

“We got a lot of penalties,” LaRocco said of the potential game-winning drive. “I think we got that penalty and that hurt us. We put ourselves in a hole and then we had that fumbled snap. You can’t have a game-winning drive doing that type of stuff.”

Another thing that gave the Braves trouble was Petaluma’s veer running game. The Trojans ended up running for 159 yards, most of which came in the first half.

“I think we did more guessing than reading,” LaRocco said of the run defense. “When you guess instead of read, you miss, and when you miss, you give up big runs. Kudos to them for running hard, but we’ve got to do a better job of bringing people down. We were there and then we missed a lot of tackles.”

The first score of the game came when Justin-Siena’s Caden Parlett scored from 5 yards out at the 7:48 mark of the first quarter. Parlett would also score from 10 yards out with 9:35 remaining in the game, ending the night with 25 rushes for 169 yards.

“He’s an absolute stud, and the kid he plays his heart out,” LaRocco said of his senior running back. “He pushes everything he has in every game to the point where sometimes he’s throwing up on the field.”

Heading into halftime, it looked like the Trojans had the momentum. But on the last play of the half, Zach Zurowski found Robby Sangiacomo for a 21-yard score as the clock expired.

“I was happy with the way we went into halftime,” LaRocco said of the score before the break. “That was a big play by Robby with no time left on the clock. I thought that was a momentum-swinger. But then we come out and give up a touchdown on the first series, and that’s how you lose momentum.”

The Trojans’ lone touchdown of the second half came on a 6-yard run by Ellis with 8:07 left in the third quarter.

Both teams will continue VVAL play next Friday night on the road, Justin-Siena at Sonoma Valley and Petaluma at Vintage.

Drew Sangiacomo put on a homecoming passing clinic at quarterback for the Braves (3-2) in their VVAL opener Friday night, completing 23 of 28 passes for 280 yards and five touchdowns.

“I was very happy with our passing game tonight,” said Justin-Siena head coach Spencer Joske. “I was especially impressed with our offensive line.”

“We don’t pass for 280 yards if our line is not giving us time to read the coverage and make the completions,” said Joske. “We threw 28 times and Sangiacomo was never even hurried by a Petaluma defender.

After forcing Petaluma (0-3 overall) to punt on the game’s opening series, the Braves faced third-and-long at their own 35-yard line. Sangiacomo tossed a shallow screen to Logwood, who appeared to be hemmed in by Petaluma defenders and going nowhere when pulling right tackle Meyers pancaked the defensive back, clearing a lane for Logwood. Meyers continued downfield and pancaked the final defender as Logwood scampered 73 yards for Justin-Siena’s first touchdown of the contest.

“Petaluma has a strong running game that takes a lot of discipline for our defense to contain,” Joske added. “Our guys made the correct reads and it paid off for our team.”

Justin-Siena's Caden Parlett is lifted by Robby Sangiacomo after scoring as Eric Gutierrez (22) joins them and Petaluma's Doren Shaw walks away Friday night.

Justin-Siena's Caden Parlett takes a handoff as Giancarlo Guerrero (52) blocks for him against Petaluma on Friday night.