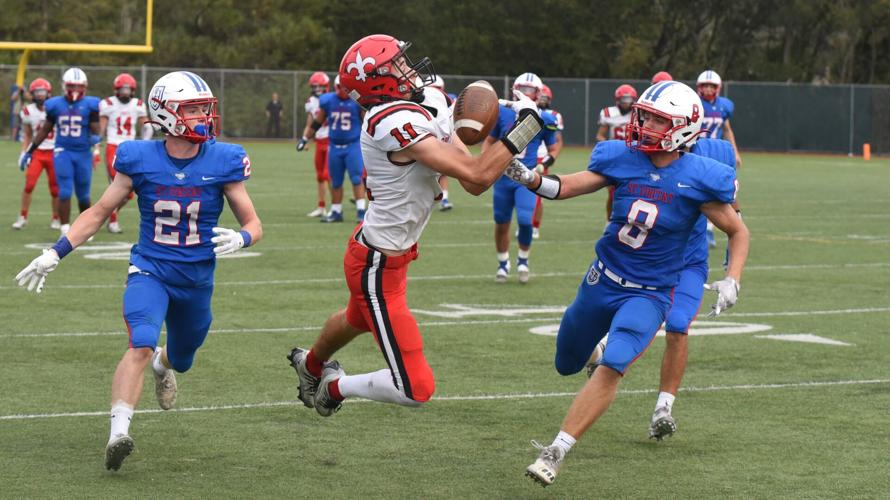 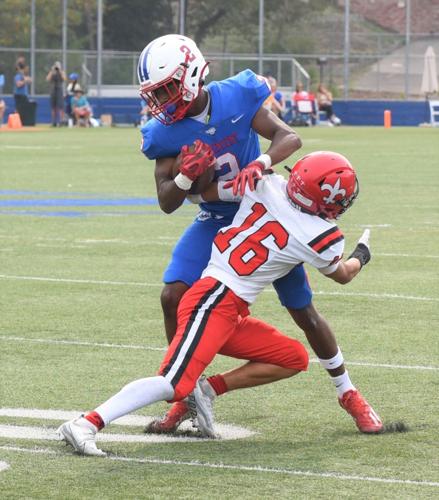 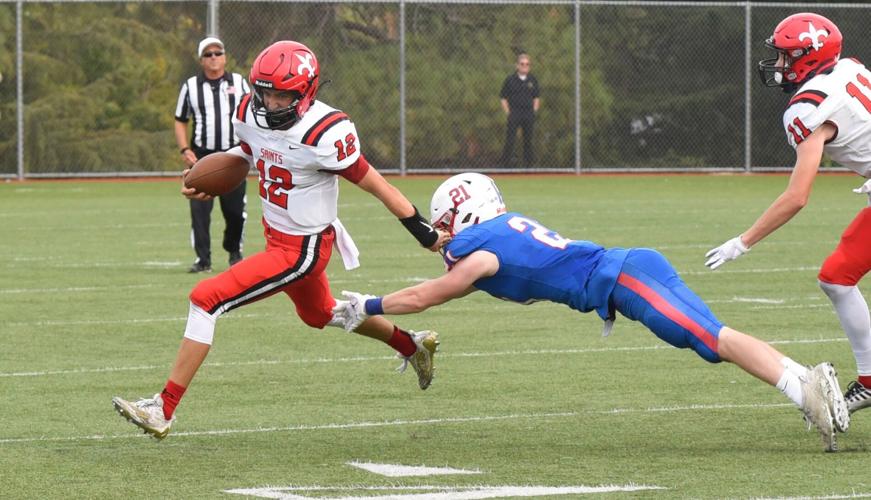 St. Helena quarterback Wynton Meyer (12) outruns St. Vincent's Tobias Klein to the corner after getting a block from Charlie Knight (11) on Saturday in Petaluma. 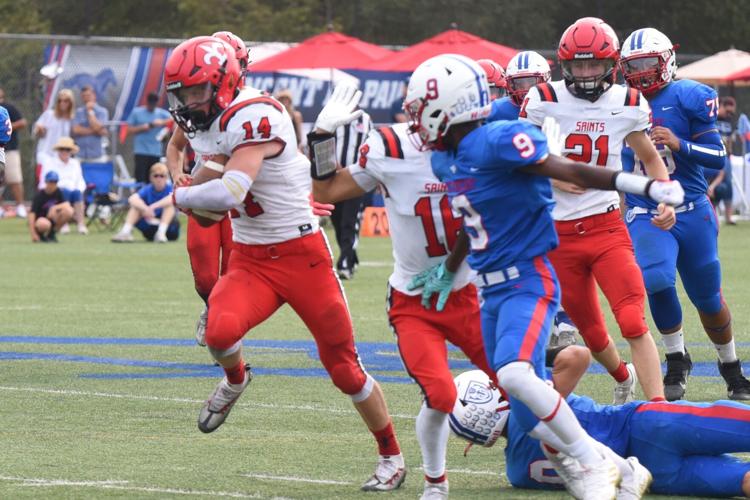 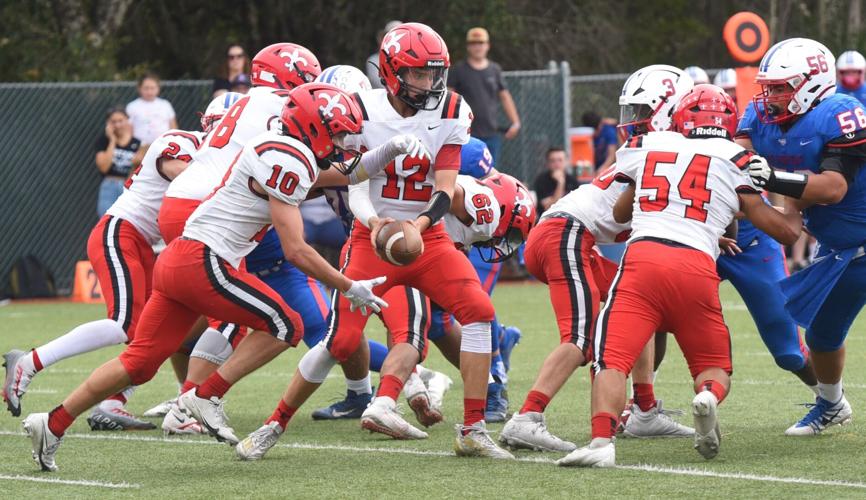 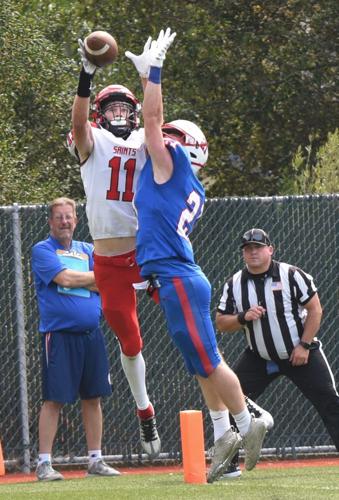 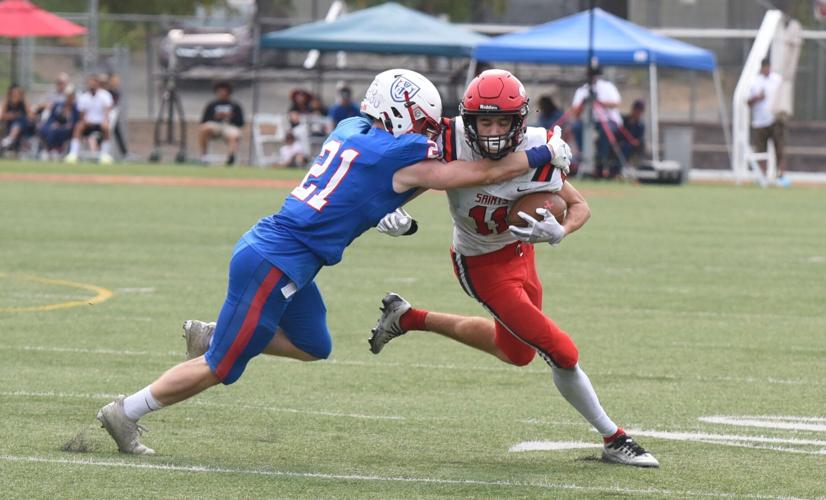 St. Helena wide receiver Charlie Knight (11) runs with the ball after a catch as St. Vincent's Tobias Klein meets him Saturday in Petaluma. 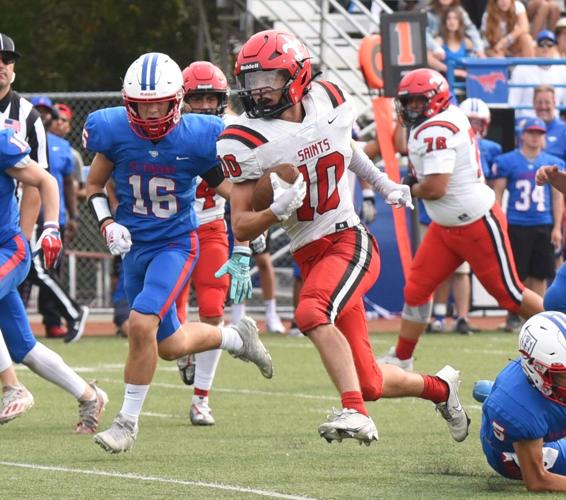 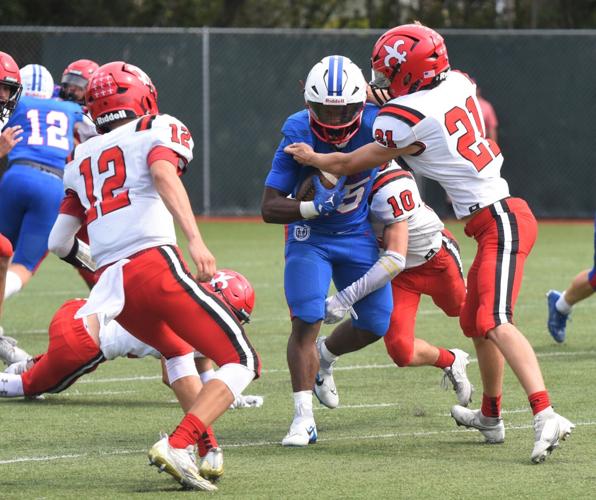 After breaking off one big play after another in routs of Justin-Siena and Winters, the St. Helena High football team met its match Saturday afternoon in a 28-7 loss at St. Vincent de Paul in Petaluma.

Just like the Saints did twice last year, when they lost 14-13 to the Mustangs in the preseason and 54-32 in the North Coast Section Division 7 championship game.

St. Helena didn’t help its cause when it went for it on fourth and 10 from its own 15-yard line and came up short on a fake punt. St. Vincent ran it in shortly after and added a two-point conversion run.

The Saints had their first chance to score when they took over at the Mustangs’ 18 and soon had first and goal from the 6. Clayton Crean got to the 2 on third down, but quarterback Wynton Meyer threw incomplete on fourth down.

St. Vincent drove 98 yards the other way and scored on a keeper by returning quarterback Jaret Bosarge for a 14-0 lead. It stayed that way into halftime after Meyer coughed up a fumble on a sack, got the ball back with an interception on defense, then gave it back to the Mustangs with an interception.

“Not scoring right before half, that was my fault,” St. Helena head coach Ian MacMillan said. “I called a play that was not something we worked on. I just thought maybe it would work and it didn’t, and that hurt. I thought we had a couple of opportunities. We’ve just got to be able to capitalize on a couple of things here and there.”

St. Helena tried to a pooch kickoff to open the third quarter but couldn’t get a fumble recovery, and St. Vincent drove for a 21-0 lead with a drive keyed by returning running back Kai Hall.

The Mustangs made it 28-0 with a long touchdown pass and the Saints nixed the shutout bid with a 37-yard scoring scamper by Crean in the final minutes.

Suddenly, St. Helena is no lonqer undefeated. The Saints have a bye this week, an extra week to prepare for their next opponent. But their next opponent, undefeated Willits (3-0), also has a bye before hosting the Saints on Sept. 23 in each team’s North Central League I opener. The Wolverines beat Piner 29-0 at home in their opener, then Berean Christian 22-0 in Walnut Creek, and McKinleyville 3-0 at home this past Friday night.

“Willits is really good,” MacMillan said. “They’re 3-0 and haven’t given up a point yet, so it’s going to be a challenge up at their place.”

The coach seemed more worried about his own team, how it will respond to its first loss.

“Everything’s ahead of us,” he said. “We lost to St. Vincent last year, so it’s just a question of what we’re going to do as a team, whether we’re going to come together or point fingers. It can go one way or the other.

“We talk about failing. That’s life. People fail a lot. You always make mistakes. You’ve got to be able to own them. Once you start blaming other people, that’s when you become a failure. Failures are a part of life and you’ve got to be able to deal with them. We’ve got to tweak a few things in terms of our passing game. That’s on me. I’ve got to develop that a little bit more through practice.”

“Our offense started off slow and that was kind of a problem for us getting momentum, and our defense gave away some big plays,” the team captain said. “We’ve just got to make less mistakes mentally. Now we’ll prepare for Willits, take it one day at a time, forget about today, and move on.”

McMillan said he was proud of St. Helena’s defense, which held the Mustangs well below their 39-points-per-game average.

“I thought our defense played really well,” he said. “I’ve got 19 kids and they out-weighed us across the board. “I’m proud of the kids. They fought. Now we’ve got things to work on.”

Dave Mosher contributed to this report.

The Vintage High football team avenged its only Vine Valley Athletic League loss of 2021, one that cost the Crushers a playoff berth, with a 41-19 rout of visiting Casa Grande on Friday night at Memorial Stadium.

The Justin-Siena volleyball team looked dead in the water after falling behind visiting Vintage two games to one with a decisive 25-13 loss in Game 3 on Thursday night.

The Napa High volleyball team is working on fundamentals and consistency as it goes for its first win Wednesday night at American Canyon.

Junior quarterback Yovanni Palma and senior running back Carlos Mata put the Napa High football team’s offensive load on their backs, accounting for 277 of its 279 yards rushing as the Grizzlies evened their record to 2-2 on the season with a 27-13 win over Novato on Friday night at Memorial Stadium.

The Justin-Siena High football team notched its third consecutive shutout in a 20-0 whitewash of Bear River at Dodd Stadium on Friday night, a year after blanking the Bruins 25-0 in Lake of the Pines.

Madelyn (Densberger) Levesque, the Napa County Player of the Year in both volleyball and girls basketball as a senior in 2010-11, will be inducted into the St. Helena High School Athletic Hall of Fame on Oct. 29.

Who can afford to buy the Phoenix Suns?

St. Helena quarterback Wynton Meyer (12) outruns St. Vincent's Tobias Klein to the corner after getting a block from Charlie Knight (11) on Saturday in Petaluma.

St. Helena wide receiver Charlie Knight (11) runs with the ball after a catch as St. Vincent's Tobias Klein meets him Saturday in Petaluma.