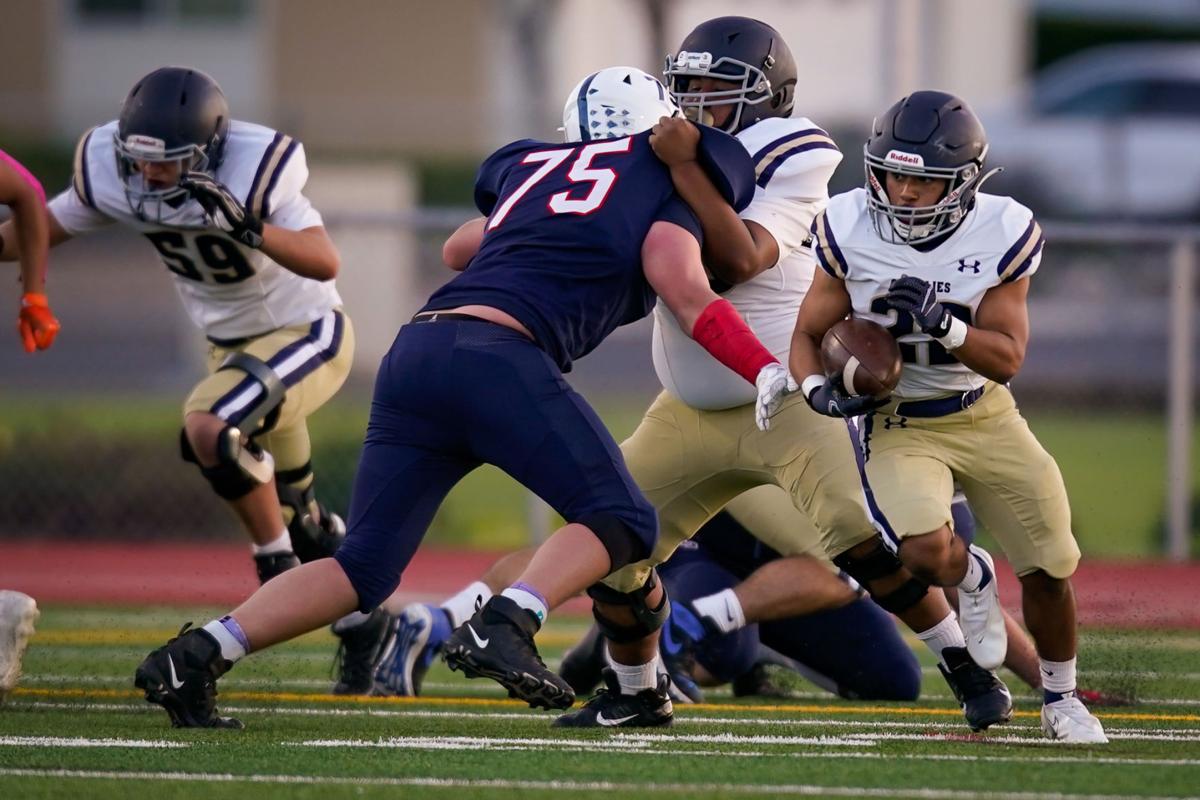 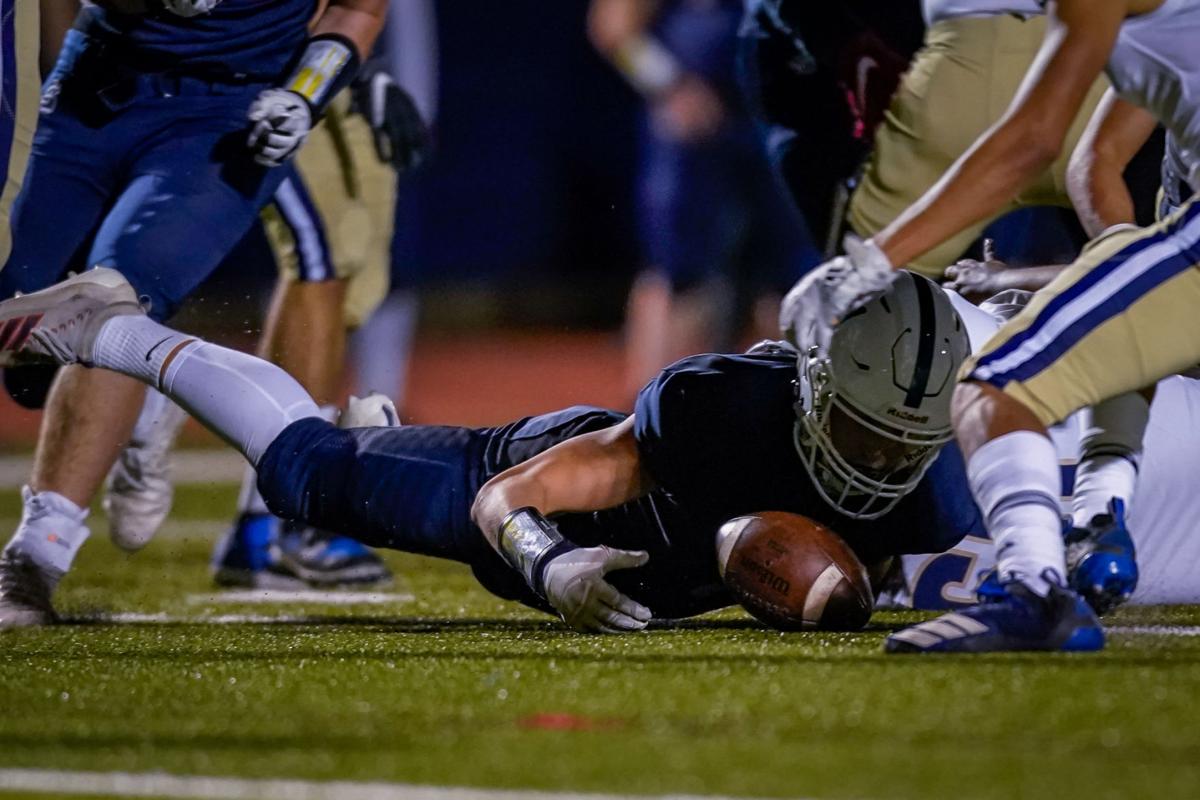 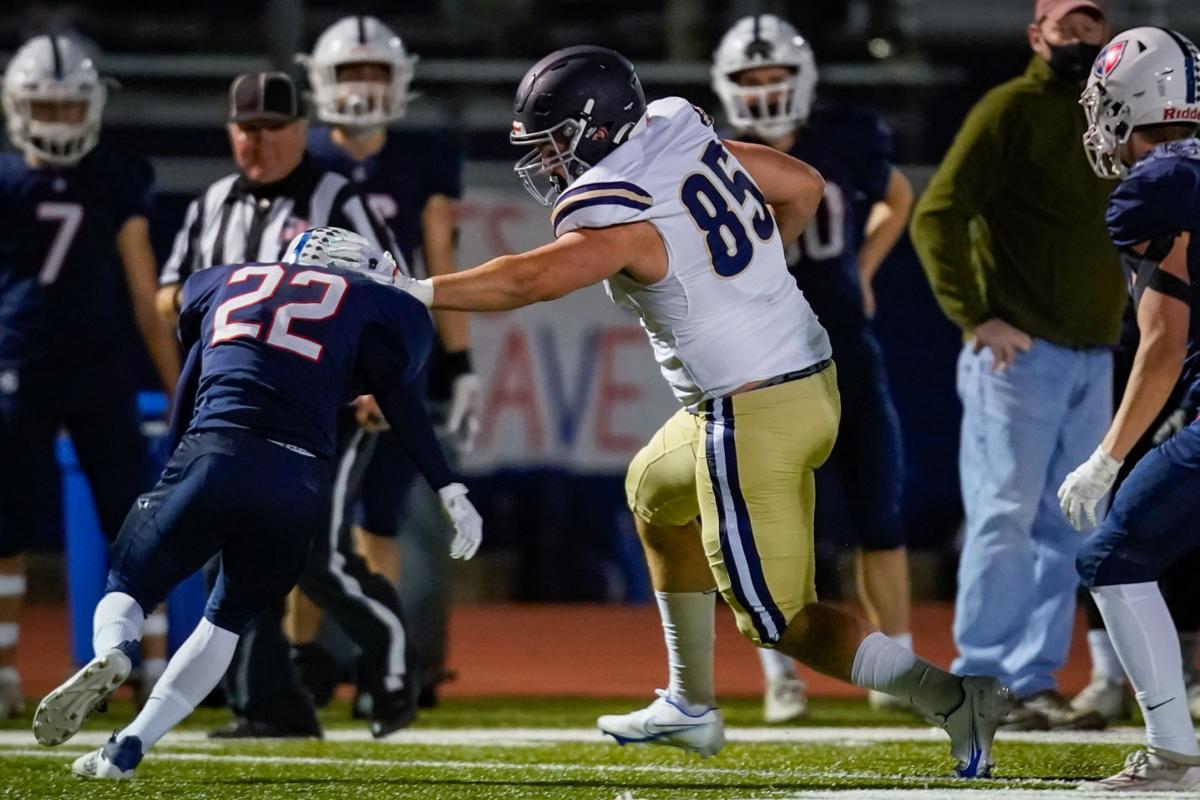 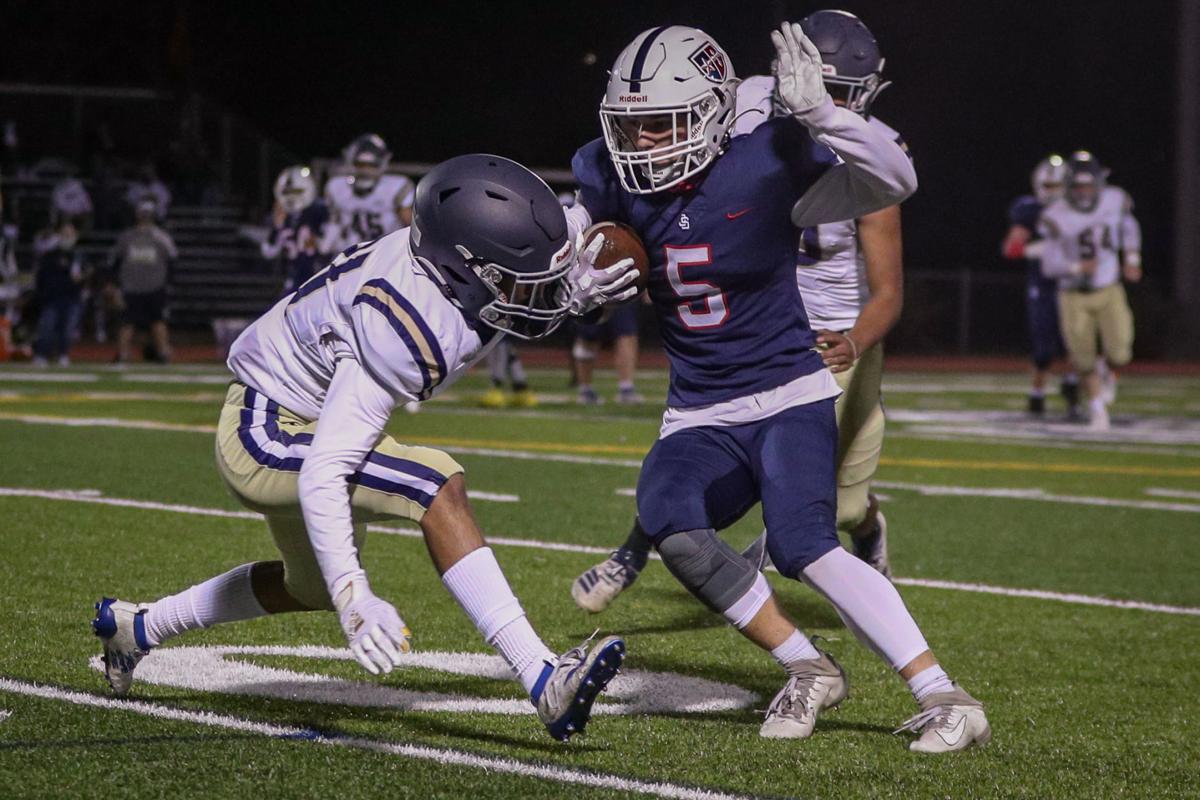 Justin-Siena wide receiver Seth Morrison (5) gets a first down on a catch before Napa High's Raul Castellanos (21), left, and Rudy Hernandez stop his progress Friday night. 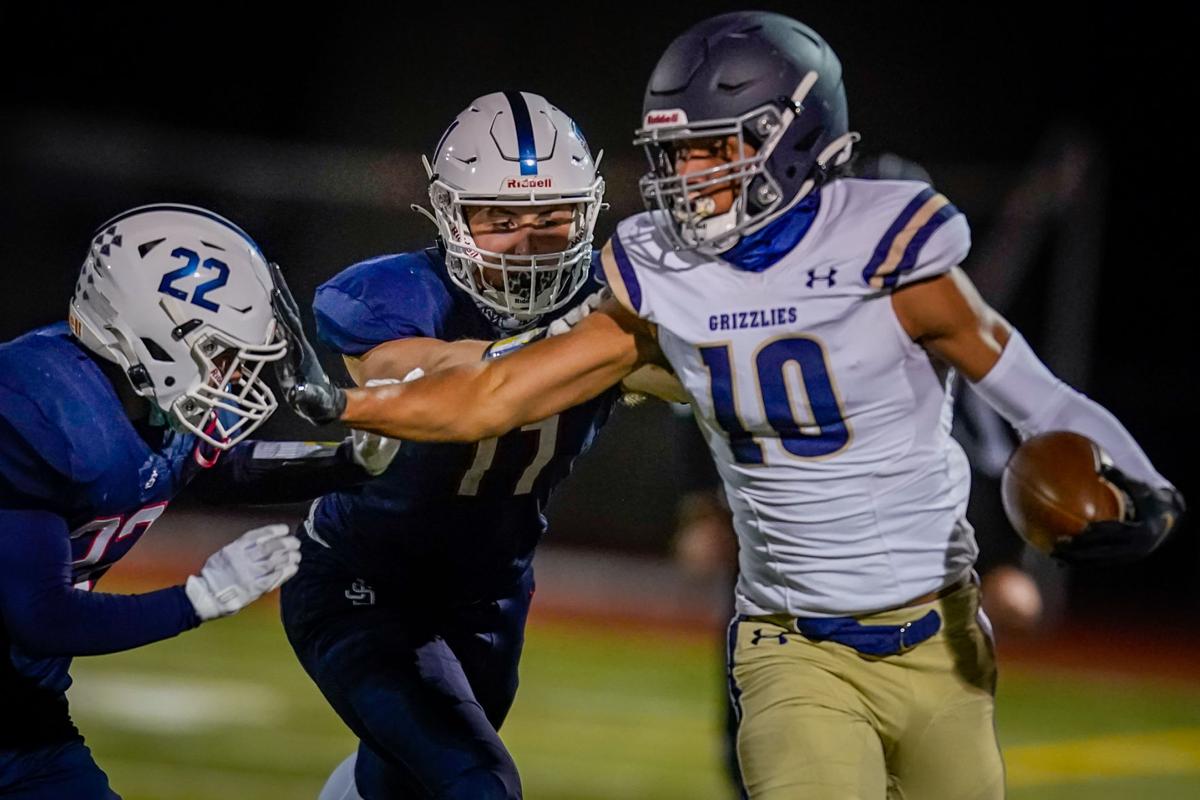 Napa High's Christoph Horton (10) returns a kick to the 50-yard line before Justin-Siena's Eric Gutierrez (22) and Miles Martin bring him down Friday night. 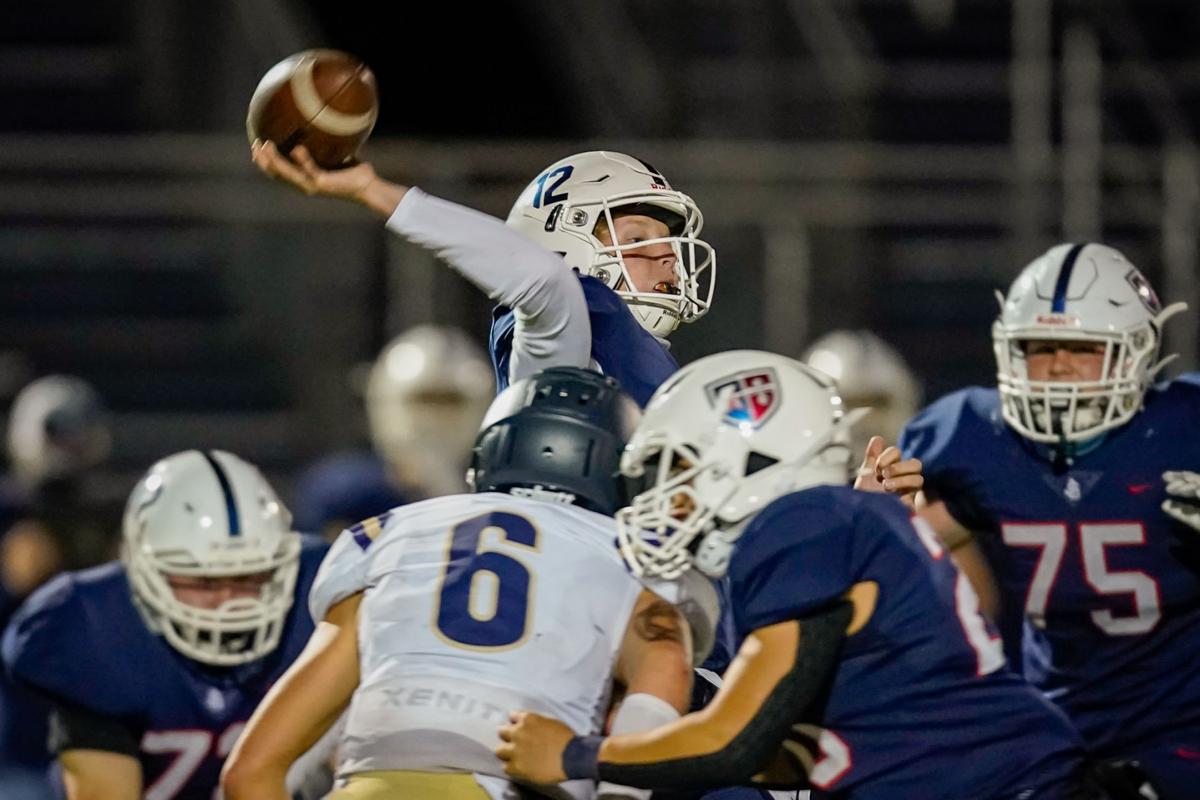 Justin-Siena quarterback Hudson Beers passes as the pocket collapses around him against visiting Napa High on Friday night. 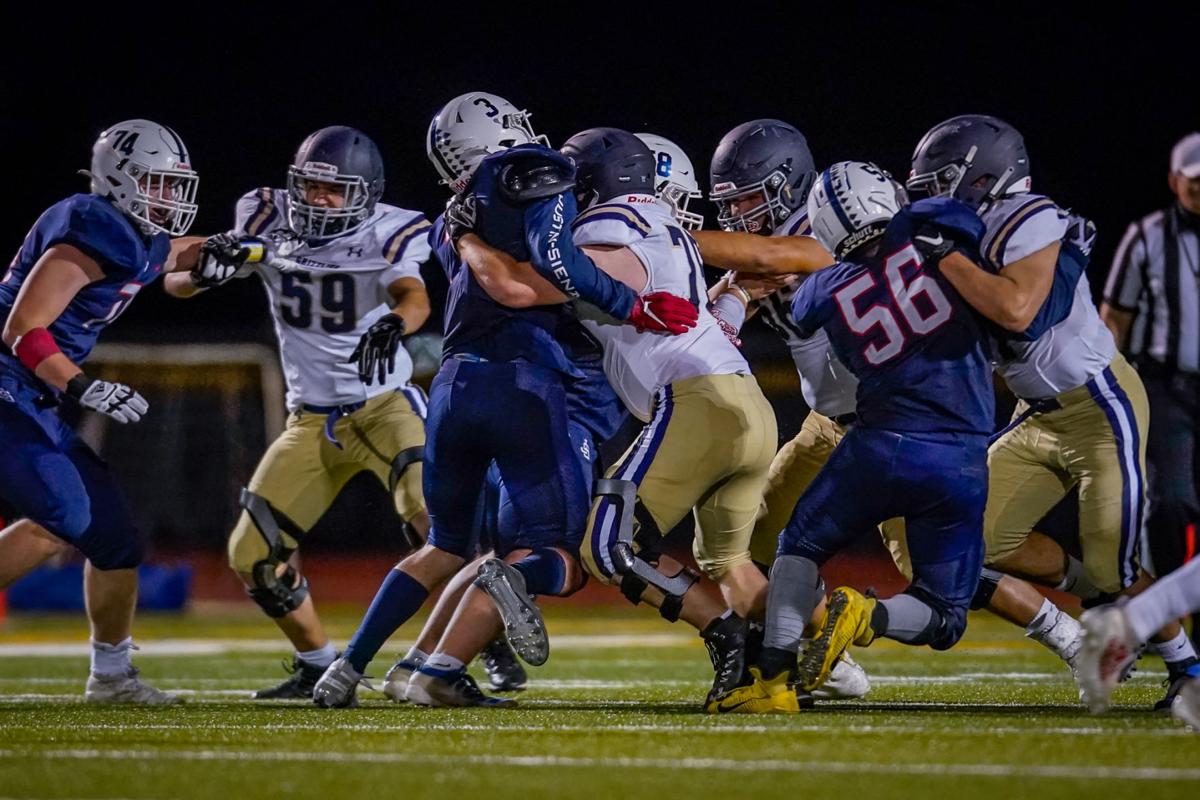 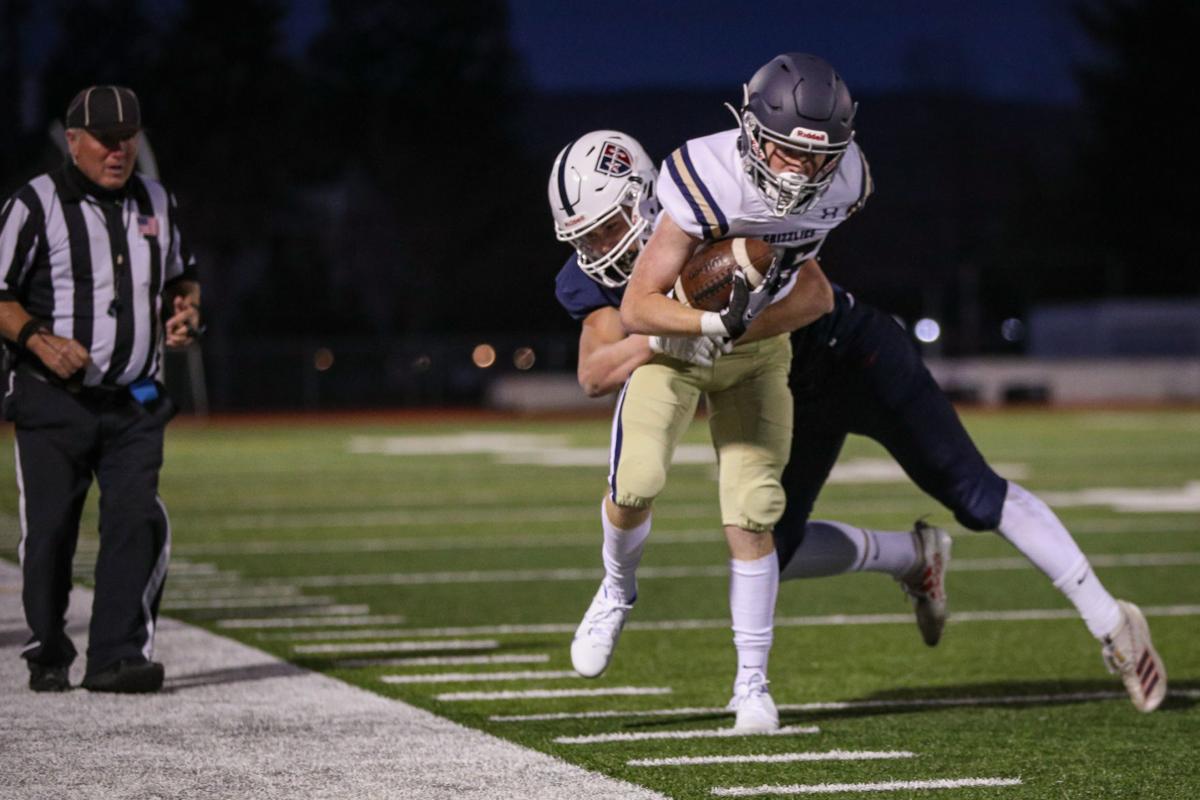 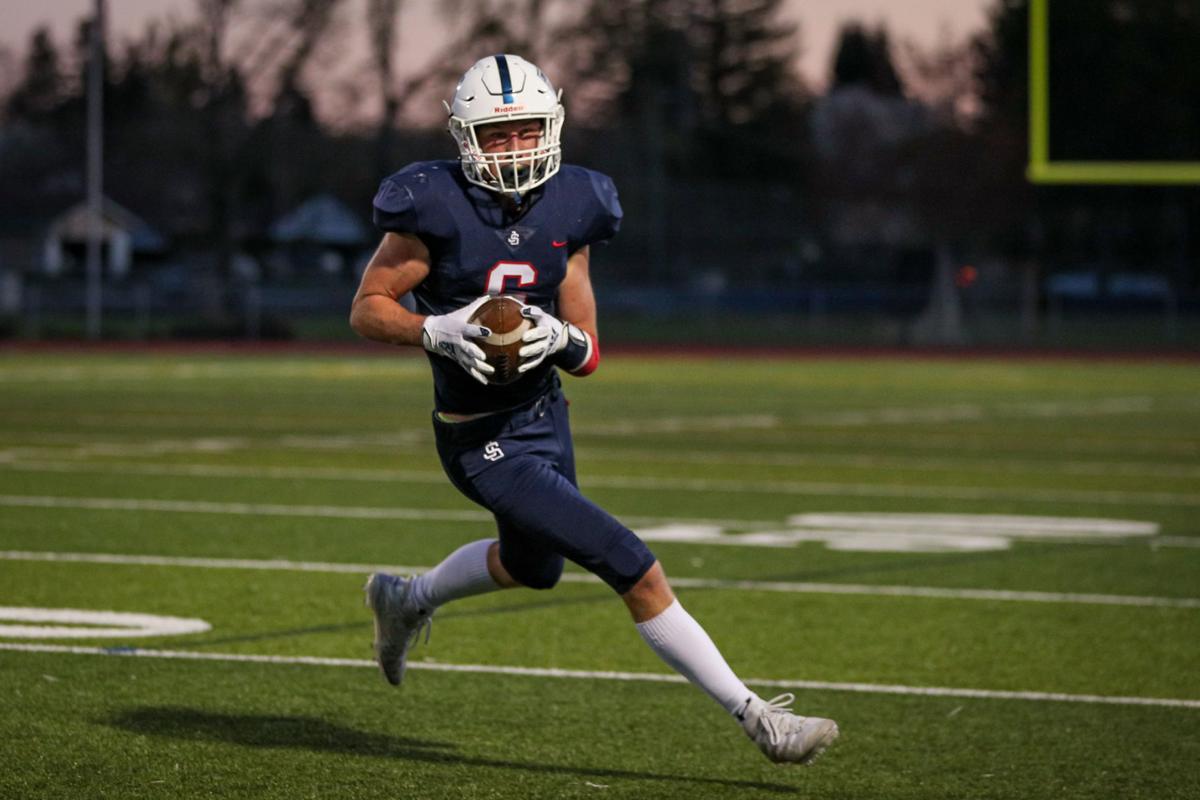 In a contest that would give some clarity to the Vine Valley Athletic League pecking order this football season, the Napa High defense shined brighter and hit harder.

The Grizzlies harassed Justin-Siena quarterback Hudson Beers all evening, using six sacks and three interceptions to pull off a 27-14 victory over the Braves at Dodd Stadium. It was the first win for Napa High (1-1 VVAL) and first loss for Justin-Siena (2-1 VVAL).

As the Grizzlies congregated for a postgame breakdown, Issac Rojas screamed out “Now that’s Napa defense,” drawing many cheers from his teammates. The defensive unit allowed Beers to complete only 16 of 37 passes for 165 yards and held the Braves’ high-powered attack to 152 yards of total offense. It was the first win for Askari Adams as a head coach and as Napa’s second-year defensive coordinator, following the previous week’s 13-3 loss at American Canyon.

“It’s a great win for the program, and after last week you know we wanted to come out and play Napa Football — play as one, play physical, and I thought tonight every play was physical on both sides of the ball,” Adams said. “The coaches did a good job all week preparing the kids mentally and physically and they came out tonight and they put all three factors of the game together.”

The key for the Grizzlies was the second quarter. Justin-Siena had just jumped into the lead, 14-7, after Beers found Seth Morrison for a 24-yard touchdown pass. It was the second time the seniors had connected on the night, the first being for a 14-yard score in the opening frame for the first touchdown of the game.

The Justin-Siena offense was looking to go up by two scores before the halftime break, but was pinned deep in its own territory after a solid punt by Napa. A bad snap forced the ball into the end zone and Beers picked up the ball and rolled to his left. The signal caller was instantly pressured by the Grizzlies’ defense and heaved the ball into tight coverage. Senior middle linebacker Rudy Hernandez tracked the panic, snapped the ball out of mid-air, and cruised into the end zone for the score for a pick-six that tied the game.

The momentum continued to flow for the crosstown visitors.

“All night we were getting pressure on the quarterback and, on that play, we were able to get three or four guys in his face and he just threw it up,” Adams said. “We try to thrive off of mistakes and we knew we had to hold them down there to get our offense the ball in a good position. Luckily we scored ourselves, so it was all good.”

Justin-Siena had to punt on its ensuing drive, and Napa took over at the Braves’ 37-yard line. Napa quarterback Mal Turner completed passes of 6 yards to Liam Jezycki and 6 yards to Manuel Infante before putting the Grizzlies up for good with a 25-yard touchdown pass to Rojas. The senior athlete found his way around one Braves defender and then tiptoed down the line with athletic grace for the score.

“I think we made a lot of mental mistakes,” Justin-Siena head coach Brandon LaRocco said. “We got a couple of guys get dinged up and we are not very deep right now. So anytime somebody goes out, it’s like three or four position switches to replace one dude. I think that caught up with us tonight, especially on defense.”

The Napa defense grabbed five of its six sacks in the first half and never let Beers have an open pocket, as the Grizzlies were able to handle an inexperienced offensive line. Some Braves linemen were making only their second varsity starts and a few had to play new positions on the fly during the second half.

“They did a good job bringing pressure from different spots and they were aggressive. They’re big upfront and physical,” LaRocco said of the Grizzlies. “I thought in spots we did well picking it up. In other spots, not so much.”

Napa’s offense picked up only 98 yards of total offense in the first half, but was able to use a consistent rushing attack to eat up the clock after the halftime break. Benito Saldivar and Infante, who aren’t very big but are wrestlers with good balance, carried the load in the second half. Saldivar had a team-high 148 rushing yards on 26 carries and had the first score for Napa in the contest. Infante, nicknamed “Rabbit,” added 75 yards on 10 carries.

The rushing pair were looking to score Napa’s fourth touchdown of the game on the first drive of the second half, but were faced with a fourth and 5. Turner, however, took a quarterback keeper through the offensive line while avoiding would-be tacklers and scampered 13 yards for the first down. That set up a 29-yard field goal by Oscar Sotelo that put the visitors up by 10 points.

The injury bug continued to pester the Braves for most of the second half, when it seemed a Justin-Siena player was being treated for leg cramps on every other play. The Braves players never quit, but couldn’t overcome a strong showing by the Grizzlies.

Napa added its last points deep in the fourth quarter, chewing up the clock and getting a 24-yard field goal from Sotelo.

“The kids fought all the way to the end of the game and they never gave up,” said LaRocco, whose 2019 squad lost 42-14 to Napa. “I thought last year’s game was more of a tidal wave and it wasn’t as close as the final score, but this year was a lot closer to what the game actually was like. We were in this game the entire time. They fought all the way to the end, and that’s all you can ask for.”

Napa visits Petaluma next Friday night. Justin-Siena, with a league bye, will visit St. Vincent de Paul in Petaluma for a nonleague game next Saturday afternoon.

Roman Williams rushed for 157 yards in 13 carries, including scoring scampers of 11 yards in the first quarter and 23 yards in the fourth, as the Braves (2-0-1 VVAL) stayed undefeated.

Emrys Davies added second-quarter scoring plunges from 1 and 2 yards out, and a pair of two-point conversion runs. Holden Beers passed to Nathan Spare for the last conversion.

Beers was 5 of 11 passing for 81 yards, finding Orlando Martinez twice for 48 yards and Spare three times for 33.

St. John's Lutheran back on track with annual meet

Why is there still so much doubt surrounding the Atlanta Hawks?

Justin-Siena wide receiver Seth Morrison (5) gets a first down on a catch before Napa High's Raul Castellanos (21), left, and Rudy Hernandez stop his progress Friday night.

Napa High's Christoph Horton (10) returns a kick to the 50-yard line before Justin-Siena's Eric Gutierrez (22) and Miles Martin bring him down Friday night.

Justin-Siena quarterback Hudson Beers passes as the pocket collapses around him against visiting Napa High on Friday night.