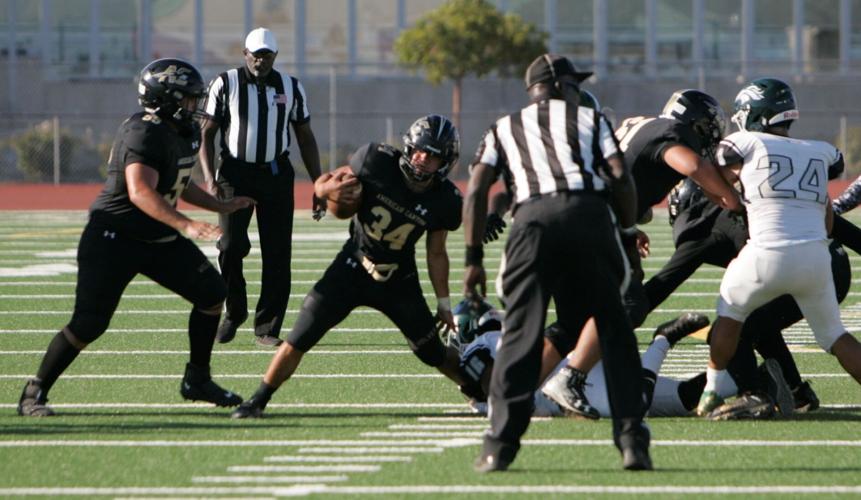 -American Canyon High junior running back Kapono Liu tries to free himself from the grasp of visiting Rodriguez's Mekhi Johnson on Monday night. 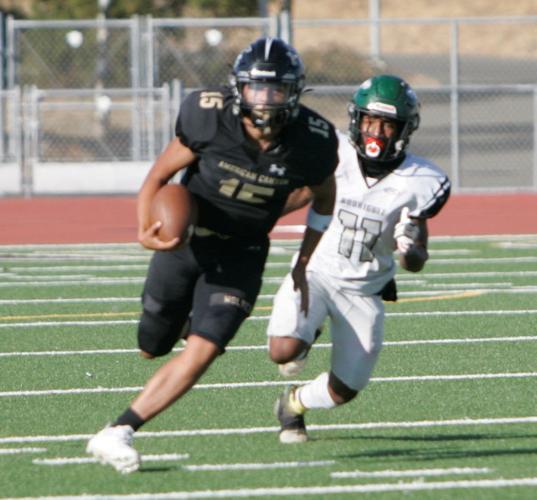 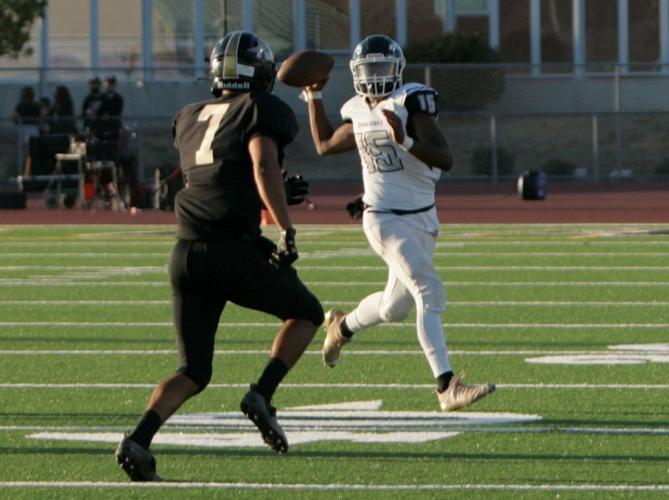 AMERICAN CANYON — The only extra point of the game had American Canyon leading late in a two-touchdowns-apiece thriller Monday night.

But Rodriguez’s Malik Dawson made up for missing an early extra point attempt by kicking the winning 37-yard field goal with 36 seconds left as the Mustangs won 15-13 in a game postponed from Friday because of unhealthy air from wildfire smoke.

The game was far from over after Dawson’s field goal. American Canyon junior quarterback Kaleb Anderson, making his first varsity start by running a no-huddle offense from start to finish, completed a 29-yard pass to Sean Yumang at the Wolves’ 49, then found Noel Angel for a 33-yard hookup at the Rodriguez 18-yard line with just a few seconds left.

Angel, a sophomore who is also the Wolves’ kicker, was 1 for 1 on 20-yard extra points for the night. Head coach John Montante said he considered having Angel attempt a 35-yard field goal on the last play.

“When the moment came to decide, I looked into his eyes and it wasn’t the right moment for it,” Montante said. “He’s a young kicker. But we’re going to have a (kicking game). He’s a tremendous kicker.”

Instead, the Wolves went with a pass play. Anderson’s pass went off the receiver’s hands and the clock ran out.

“It was a split-field read. He took it where he was supposed to take it,” Montante said of Anderson. “He got flushed a little bit, but he put the ball only where our guy could catch it. He put one hand on the ball and just couldn’t really put two. What are you going to do?

“I’ve got a lot of faith in Kaleb. He’s got a really good head on his shoulders. I’m really excited to see what the future holds for him.”

The Wolves came out with either first-game jitters or Monday blahs, giving up a 71-yard Rodriguez touchdown pass from Miles Meadows to Jamoryon Johnson on the second play from scrimmage. Dawson’s PAT sailed wide to keep it at 6-0 a minute into the game.

Anderson was then intercepted. But it wasn’t until after each team coughed up a fumble that Keith Gallon bulled in from the 1 to put the Mustangs up 12-0. When Rodriguez went for two points after the score, with Gallon getting stopped on a run, no one except perhaps Mustangs head coach Myles King could have known his kicker wasn’t done for the night.

American Canyon got on the board with an eight-play, 66-yard scoring drive sparked by a 22-yard keeper by Anderson and a 5-yard catch by Trenton Angold with a Rodriguez personal foul that put the ball at the 8. Liu scored from the 5 and sophomore kicker Noel Angel made the extra point to cut the Mustangs’ lead to 12-7.

Liu carried 23 times for 121 yards while wearing the No. 34 of last year’s leader and brother of Kaleb Anderson, Zeke Anderson, now playing for Benedictine College. Liu said he actually chose it out of respect for the brothers’ dad, assistant coach Ian Anderson, who coached him and many other Wolves in youth football.

Liu looked like Zeke Anderson at times, especially when he ran for 73 yards in the second half, but said game was mostly a learning experience.

“We could have had a lot more points. We definitely could have won this game. We’ve just got to stop doing those little things that hold us down,” he said. “Our team is definitely one that can pick up the pace. Our (offensive) line made mistakes here and there; their defensive line came through on a couple of plays. They just need to keep their heads in the game. We don’t have a lot of linemen, so they’ve got to play their best.”

The Wolves got the ball back when Ray Vaughan recovered an onside kick at the Rodriguez 49-yard line.

Angel, a wide receiver, then made 10- and 11-yard catches to the Rodriguez 30. But Anderson lost a fumble, and each team managed only one first down the rest of the half.

“It was weird (playing on a Monday), but I didn’t think we were going to play at all,” Liu said. “I’m really grateful that we got to play.”

Anderson and Liu swapped carries to open the third quarter before American Canyon punted. Rodriguez tried to break the ice by attempting a fake punt, but Sean Yumang stopped Da'Maynie Nelson-Wilson well short of the first down.

The Wolves then marched 60 yards in 12 plays for the go-ahead touchdown, by Liu from 2 yards out as time expired at the end of the third quarter. A two-point conversion run came up short, leaving the Wolves ahead just 13-12.

Midway through the fourth quarter, it appeared Rodriguez would go three-and-out for the second time of the quarter when Jamoryon Johnson made a key play. Well covered as he sprinted toward the south end zone, he saw Meadows’ pass get hung up in the wind and came back to make the catch at the Wolves 25.

Two plays later, Johnson made an apparent 25-yard scoring catch, but an illegal-man-downfield penalty nullified the score. After converting on their next fourth down, the Mustangs got to the 7 on a defensive pass interference call. But Meadows was then sacked at the 20 with 36.7 seconds left to bring up another fourth down, forcing Rodriguez to kick. Dawson made the field goal twice, his first attempt being wiped out when American Canyon called a timeout just before the snap.

Montante said his offense’s success passing the ball late in the game wasn’t something they wanted to do earlier in the game against the athletic Mustangs (2-0), who were coming off a 45-0 home shutout of Bear Creek-Stockton.

“Throwing the ball is something we want to do more. But you have to hold up in protection and you have to catch the ball,” he said. “They were beating us on the perimeter because their DB’s are faster than our receivers, so we were having trouble getting space. So we decided to go vertical and just bludgeon them, and we were close. We were able to move the ball on the ground almost at will, and the drive would stall or we’d get a holding penalty or a fumble, and you cannot do that. We’ll learn from it and get better.”

“They did a good job. They were really getting after it. I’m really proud of them,” he said. “It’s just the fundamentals and we have to get better at them. The good thing is we’re going to. But I give Rodriguez all the credit. They kept playing and got one more bounce than we did, the kicker made a hell of a kick there at the end, twice.”

American Canyon had just three practices this week to prepare for Friday’s trip to Burlingame for the Wolves’ first-ever meeting with the Panthers (1-0) and their wing-T offense. Burlingame was able to play its opener on Friday, blanking Capuchino 35-0 at home.

“They’re going to be really disciplined, they play in a really good league,” Montante said of the Panthers. “They’re no pushovers, so we told our guys there’s going to be nowhere to hide. They have to step up.”

The American Canyon High football team committed four turnovers in the first 14 minutes, falling into a quick three-score hole in a 31-6 loss at Burlingame on Friday night.

-American Canyon High junior running back Kapono Liu tries to free himself from the grasp of visiting Rodriguez's Mekhi Johnson on Monday night.