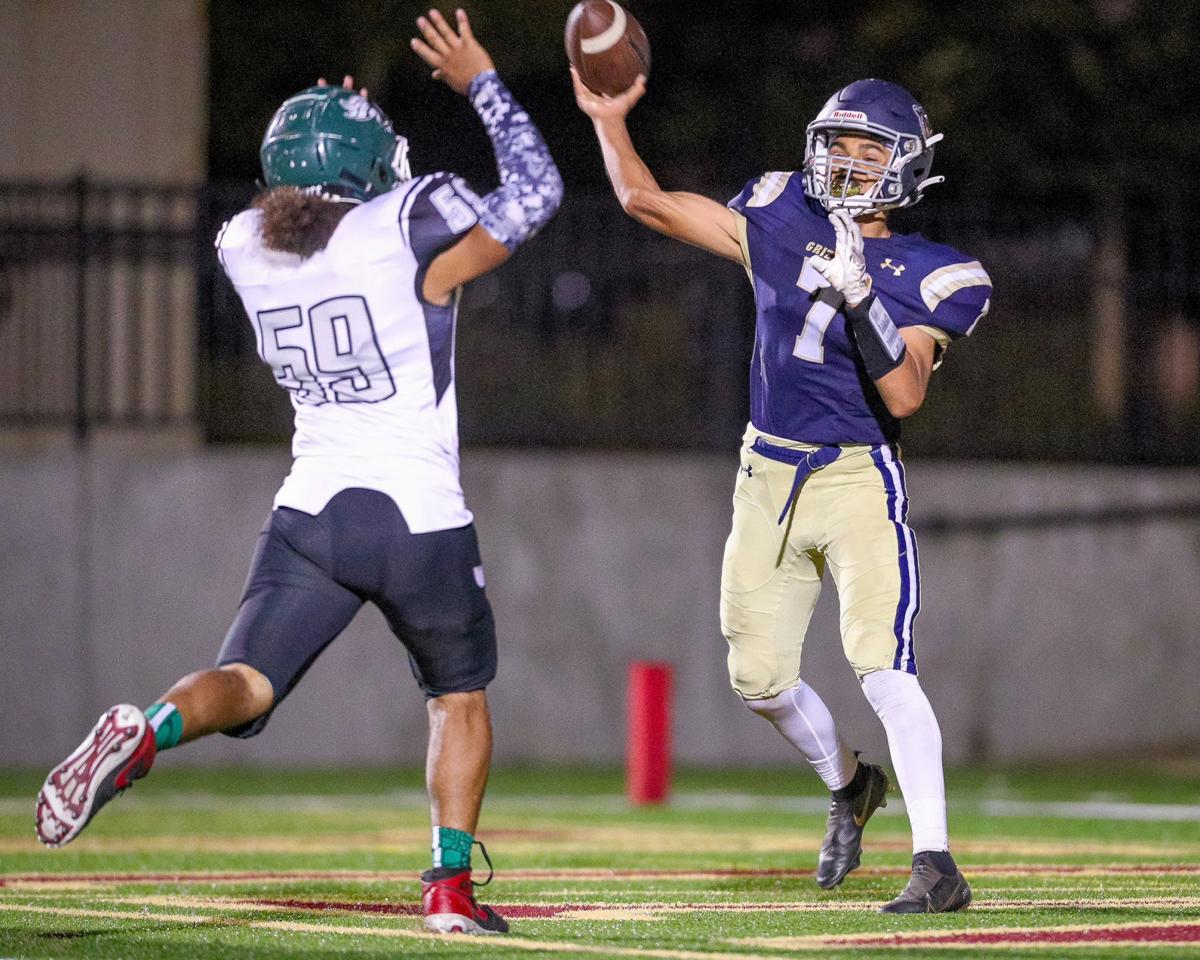 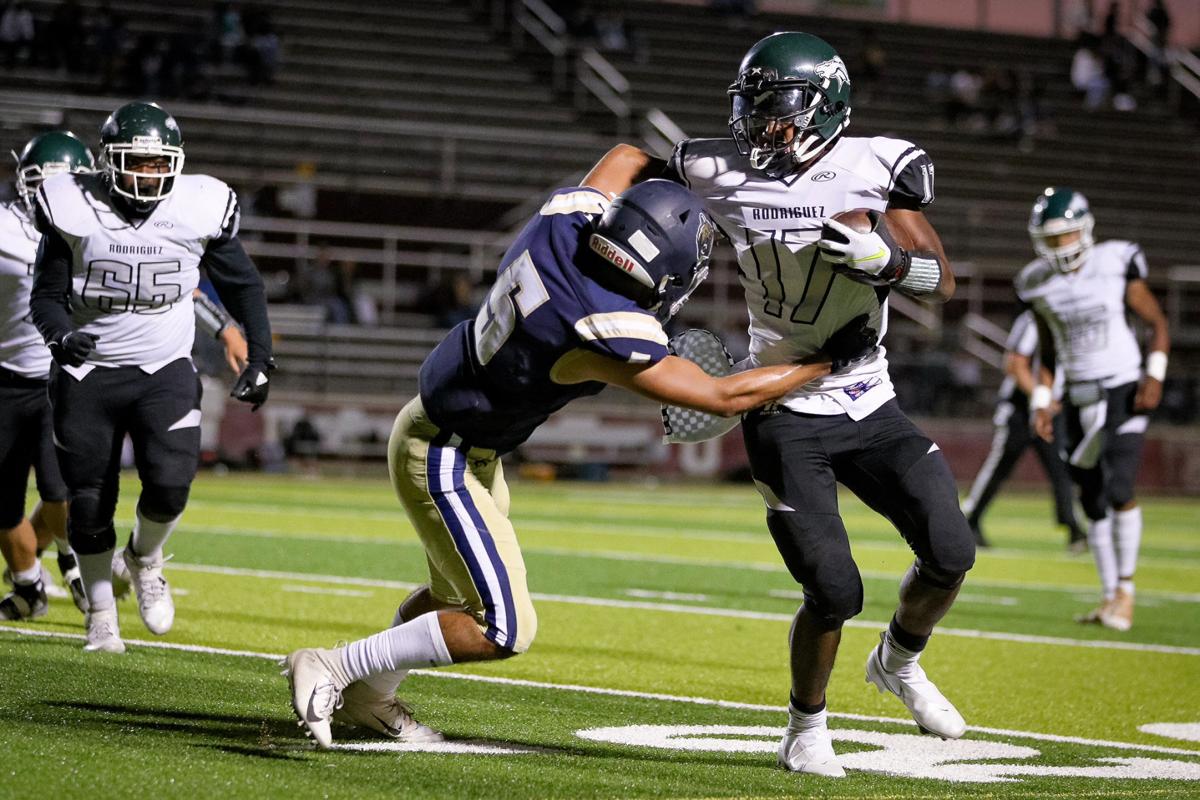 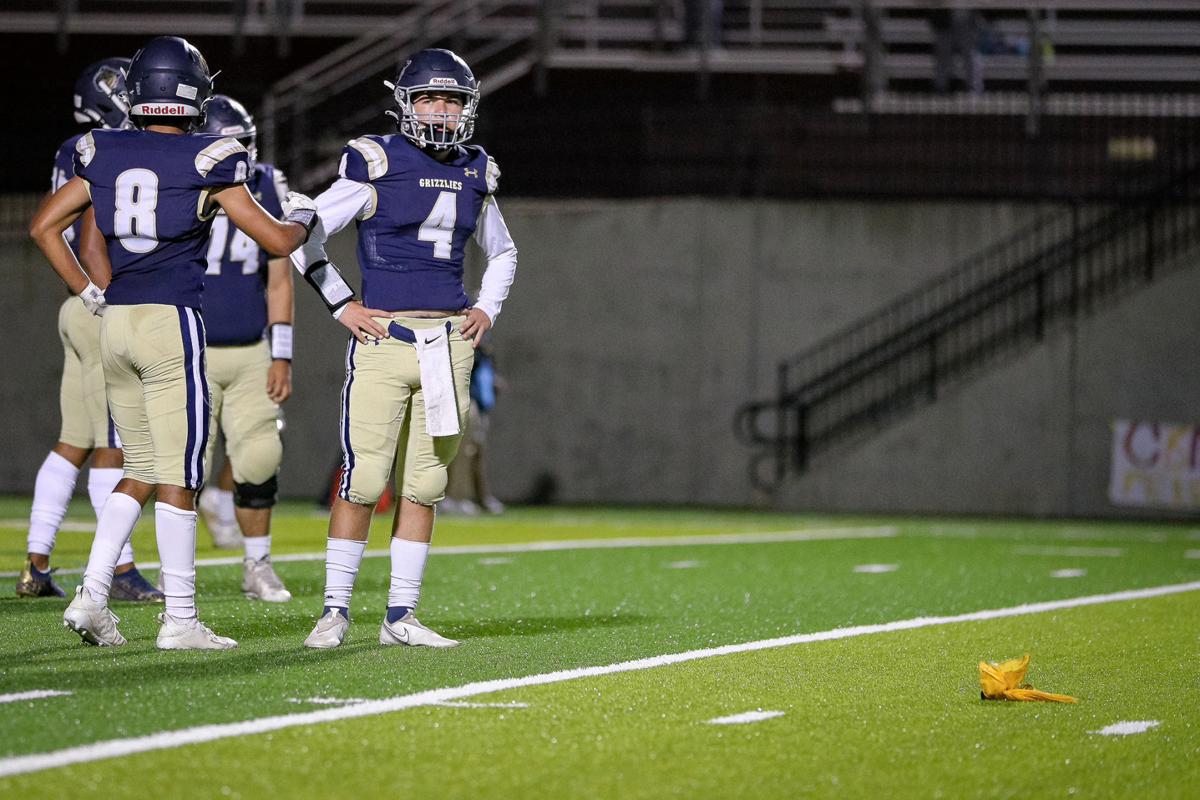 Napa High quarterback Anthony Tubridy (4) watches the signal from the sidelines as the referees discuss a roughing-the-passer penalty Friday night at Memorial Stadium. 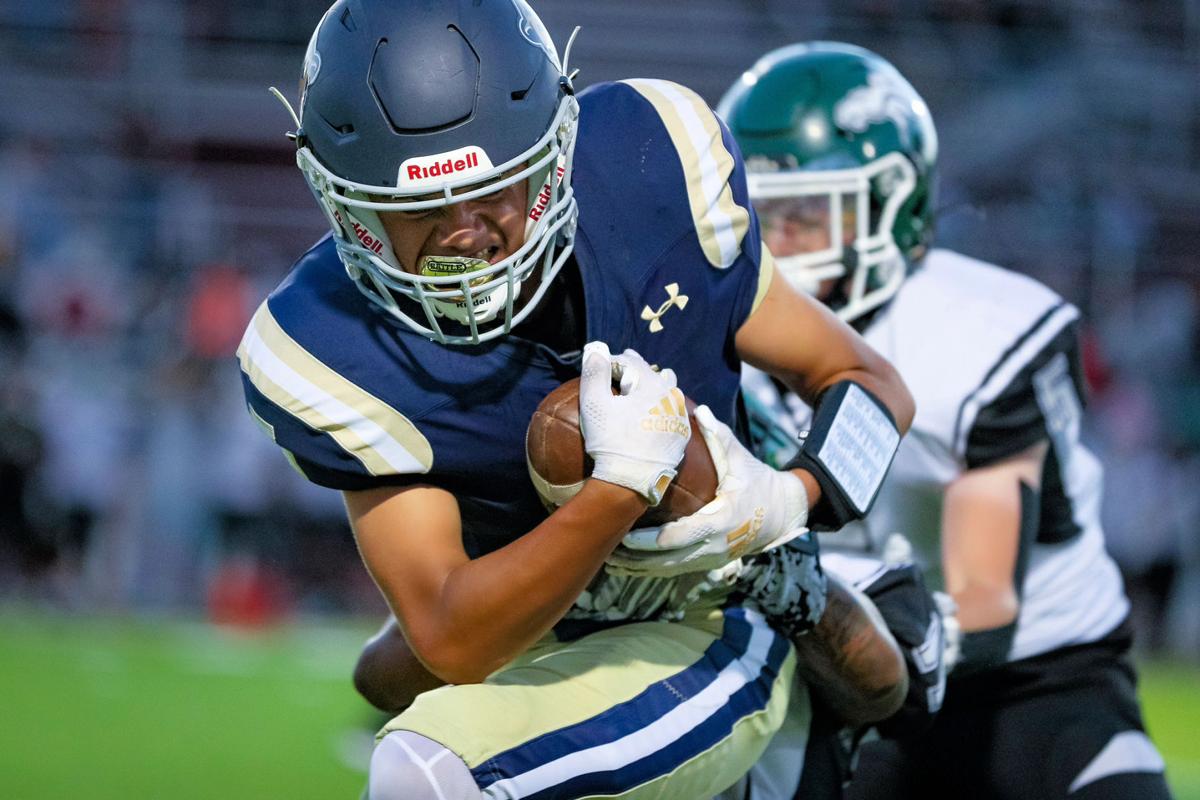 Napa High wide receiver Yovanni Palma (7) takes off after catching a pass against Rodriguez on Friday night at Memorial Stadium. 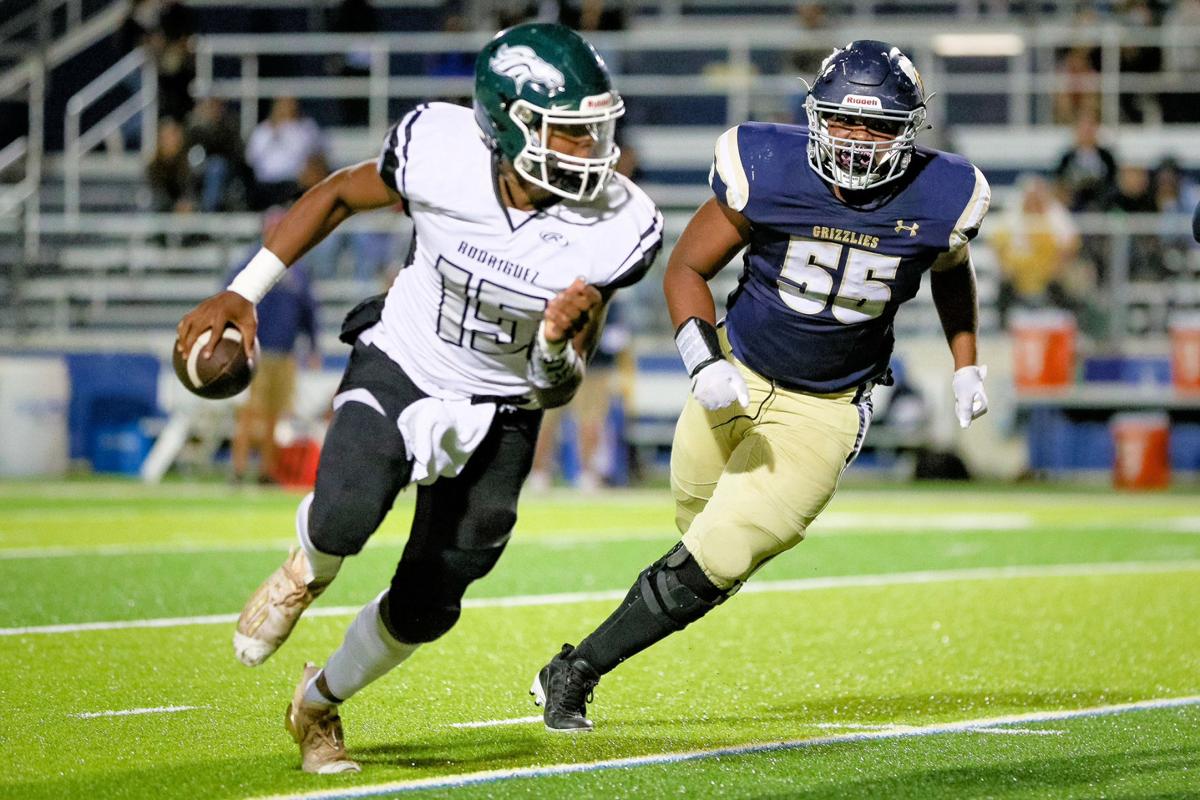 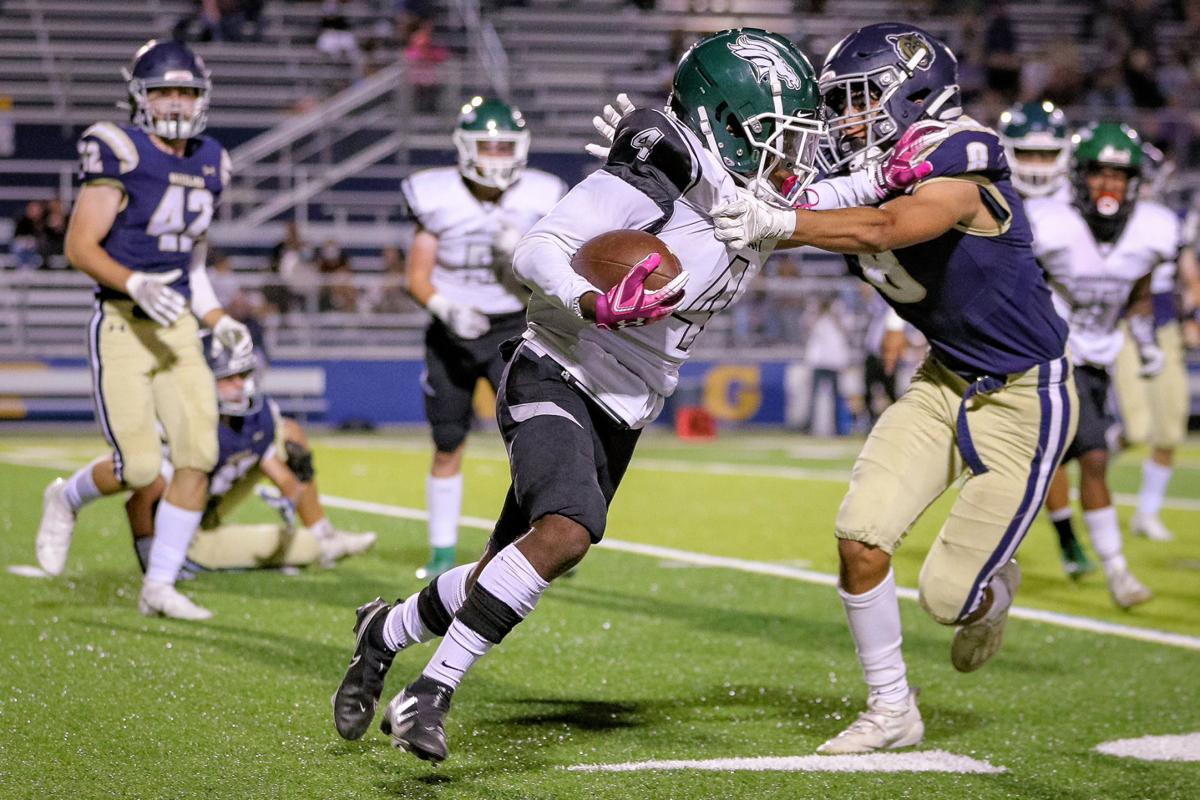 Junior quarterback Anthony Tubridy, after making his fifth straight start of the calendar year Friday night at Memorial Stadium, left the game with an injury after getting sacked in the second quarter. While walking to the sideline, Turbidy clutched at his upper body while grimacing in pain.

Grizzlies head coach Askari Adams did not have specific details on Tubridy’s injury after the game. But he deemed it serious enough to speak of the need for sophomore Yovani Palma, who had replaced Tubridy, to start next week’s game at Windsor. The Jaguars (2-0) blasted Montgomery 50-20 on Friday night.

For the Mustangs (3-0), off their best start in at least 18 years, the win over Napa (0-2) marked the first in seven matchups dating back to when they were Monticello Empire League combatants through the 2000s and into the 2010s.

Rodriguez led 14-3 with 7:18 left in the game, but scored two touchdowns in seven seconds to put the game away for good. Quarterback Miles Meadows (18-of-26, 262 yards, three touchdowns, one interception) connected with Jeremiah Hill for a 23-yard touchdown. On the first play after the ensuing kickoff, Daniel Childs returned a fumble 8 yards for a score. Meadows’ other two scoring strikes were to Leroy Bryant and Jamoryon Johnson, each from 19 yards away. Napa’s lone score was a 32-yard Oscar Sotelo field goal.

Napa fell to 0-2, having been outscored 62-17, but Adams saw progress that was not readily discernible on the scoreboard.

“You make the biggest gains from the first game to the second game,” the coach said. “I thought we improved with our aggressiveness. I was really happy with the defense. We had an unfortunate injury to our quarterback. The kids still hung in there, made plays, and played their hearts out.”

Adams was particularly pleased with his defense’s performance considering it faced a field-position disadvantage throughout the night. The Grizzlies’ average drive started at their own 28.4 while Rodriguez’s own drive start was their own 48. The Mustangs gained 420 yards, but also had 18 penalties for 166 yards.

“They came out in the second half and we gave them two touchdowns,” Adams said. “They did a pretty good job. We just couldn’t move the ball on offense and they got tired. That’s what happens when you’ve got only 30 kids, many going both ways.”

On an individual basis, Napa had numerous standouts. Palma had a fumble recovery and interception, while Thomas Hatton had two quarterback sacks. Jose Martinez had two tackles for losses. Jose Padilla, Carlo Deianni, Zack Allen and Sotelo each had a tackle for a loss. Robert Perry and Hatton led the team with two impact tackles (gains resulting in 1-3 yards) each, while Aidan Jobe, Sotelo, Deianni, Padilla and Martinez each had one.

The offensive performance, however, was stuck in neutral. Napa gained just 79 yards on 40 plays. Excluding quarterbacks running the ball on designed runs or scrambles, Napa gained just 22 yards on 16 carries in the conventional running game that involved handoffs to running backs.

“They just need to believe in themselves,” Adams said. “We’ve got a lot of young kids on the front line. Now we’re going to have a young guy at quarterback. I know they can do it and so do the rest of the coaches.”

The road gets no easier. In fact, it gets much harder. The Grizzlies travel to face a highly regarded Windsor team guided by head coach Paul Cronin, who left the Cardinal Newman helm this summer after winning a state title and several section crowns in 18 seasons there.

“We just need to get the quarterback ready,” Adams said. “We need to keep improving and play Napa football by being aggressive and be the hammer. At times we’re the hammer, but we need to be that way more consistently.”

The Grizzlies averted the shutout with 54 seconds left in the game when Aaron Medrano scored on a 1-yard run, which was followed by a failed two-point conversion. The score was set up by an Anthony Santos 34-yard interception return to the 1.

The Grizzlies had three other scoring opportunities go inside the Rodriguez 20, only to turn over the ball on downs.

Napa High quarterback Anthony Tubridy (4) watches the signal from the sidelines as the referees discuss a roughing-the-passer penalty Friday night at Memorial Stadium.

Napa High wide receiver Yovanni Palma (7) takes off after catching a pass against Rodriguez on Friday night at Memorial Stadium.