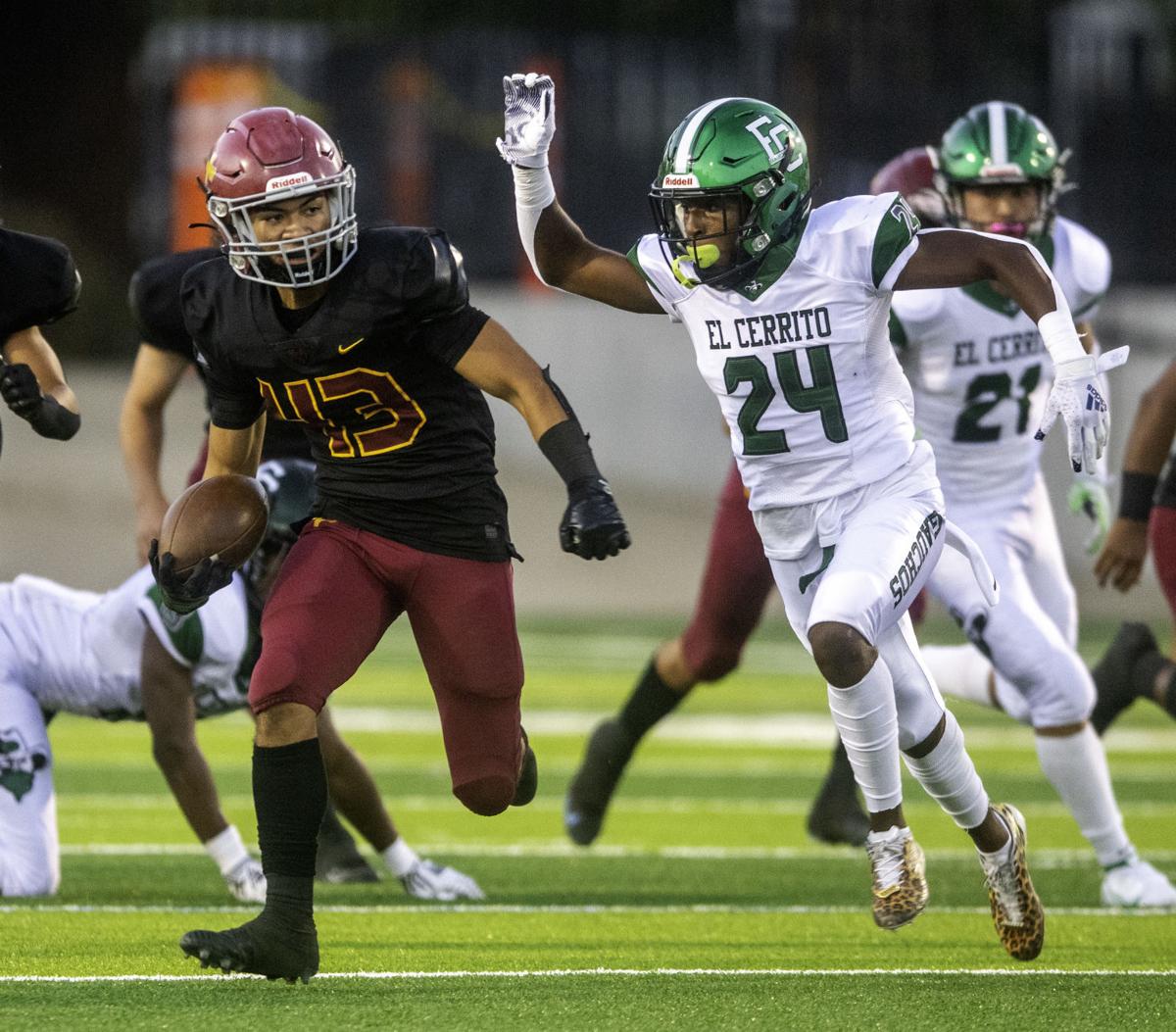 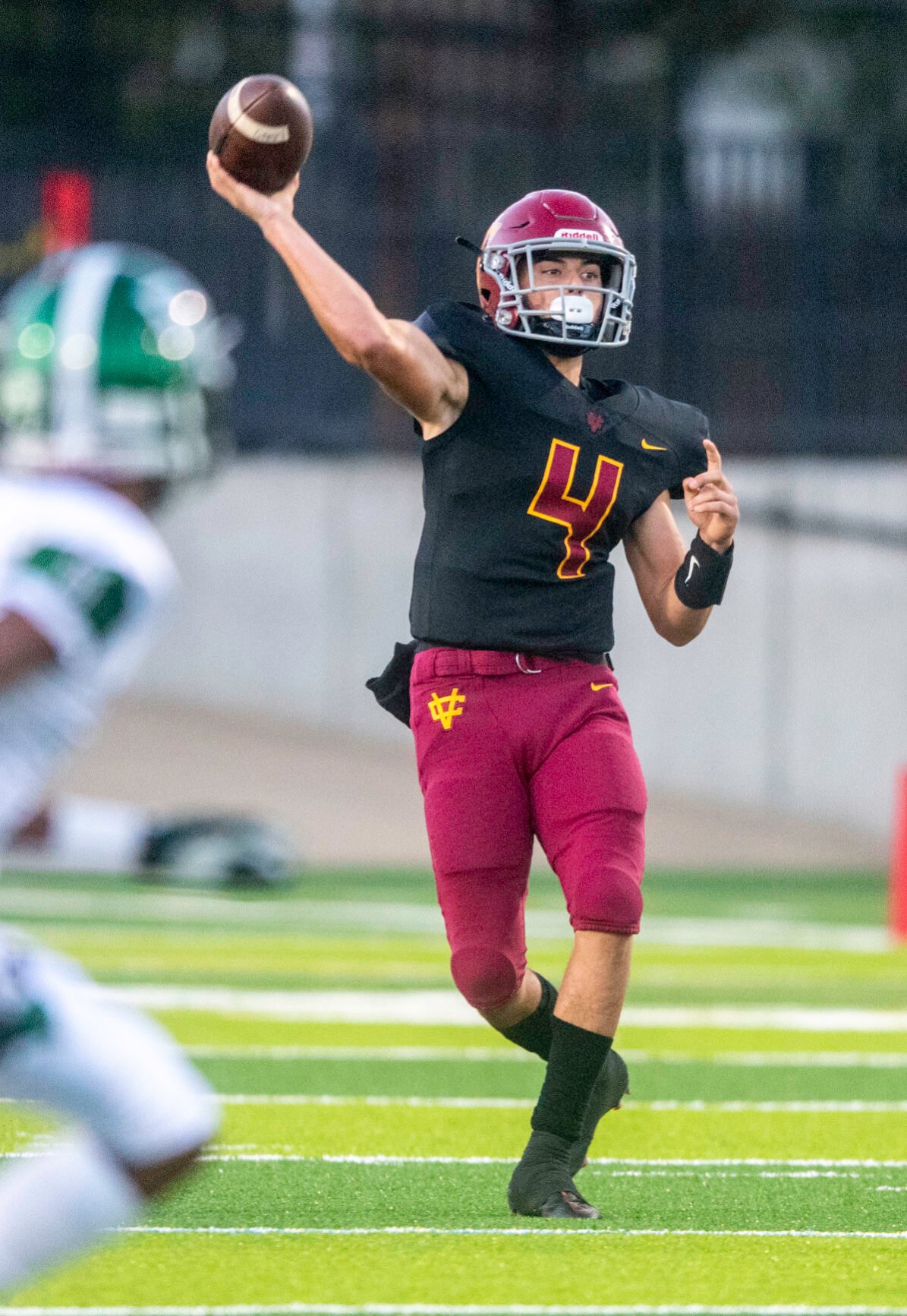 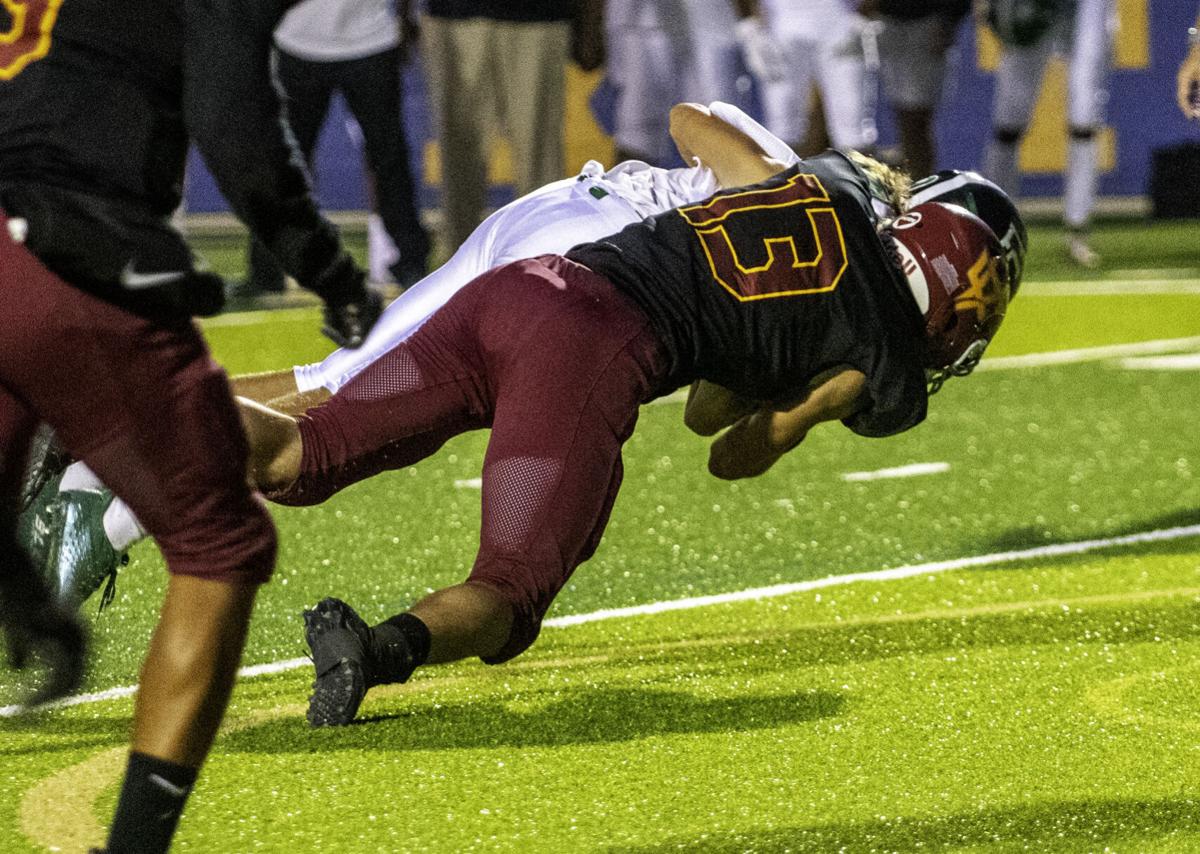 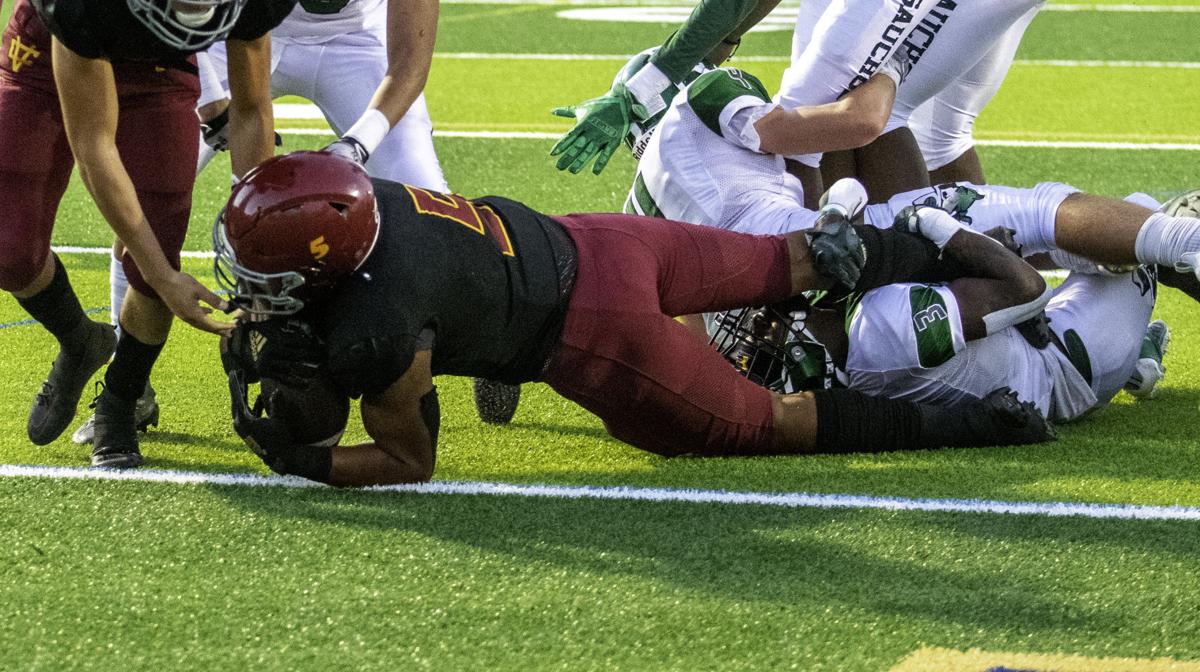 Diego Davis scores Vintage's first points of the season from 5 yards out, tying the game early in the first quarter Friday night. 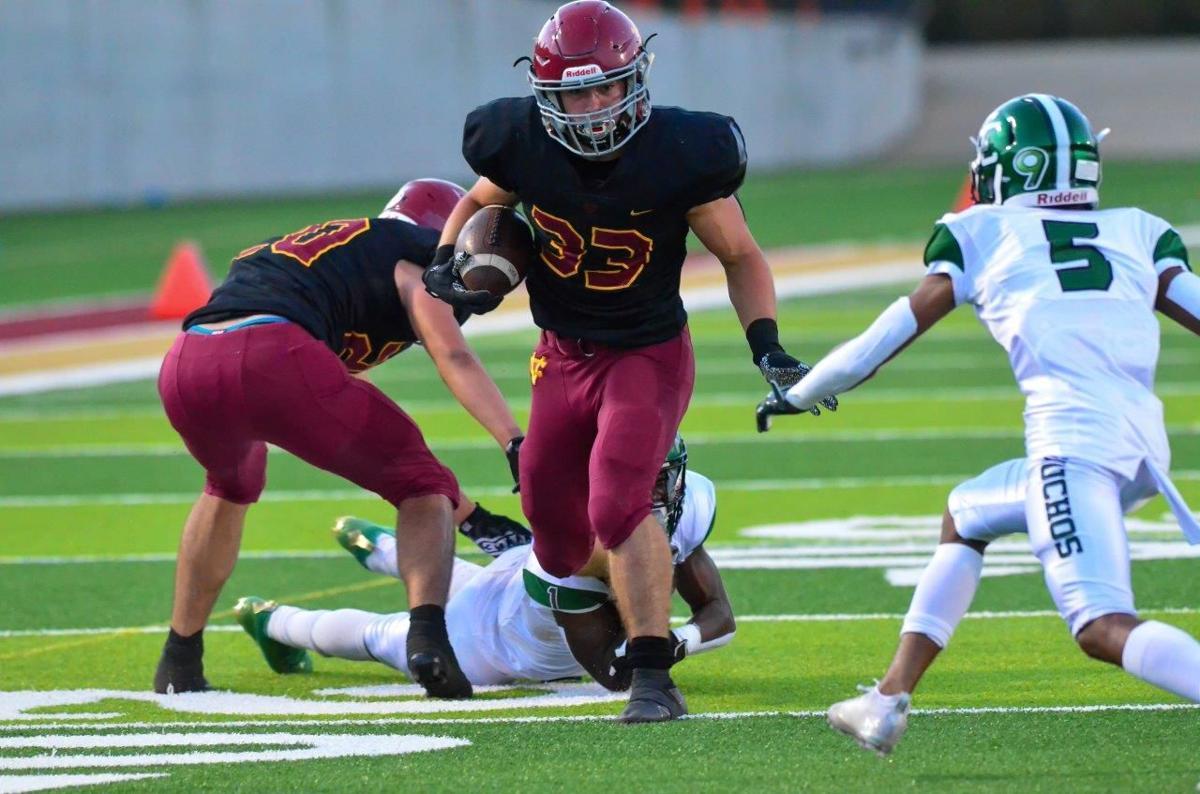 Vintage senior Dylan Smith, hobbled by a leg injury in the second half, finished with just nine carries for 27 yards El Cerrito on Friday night at Memorial Stadium. 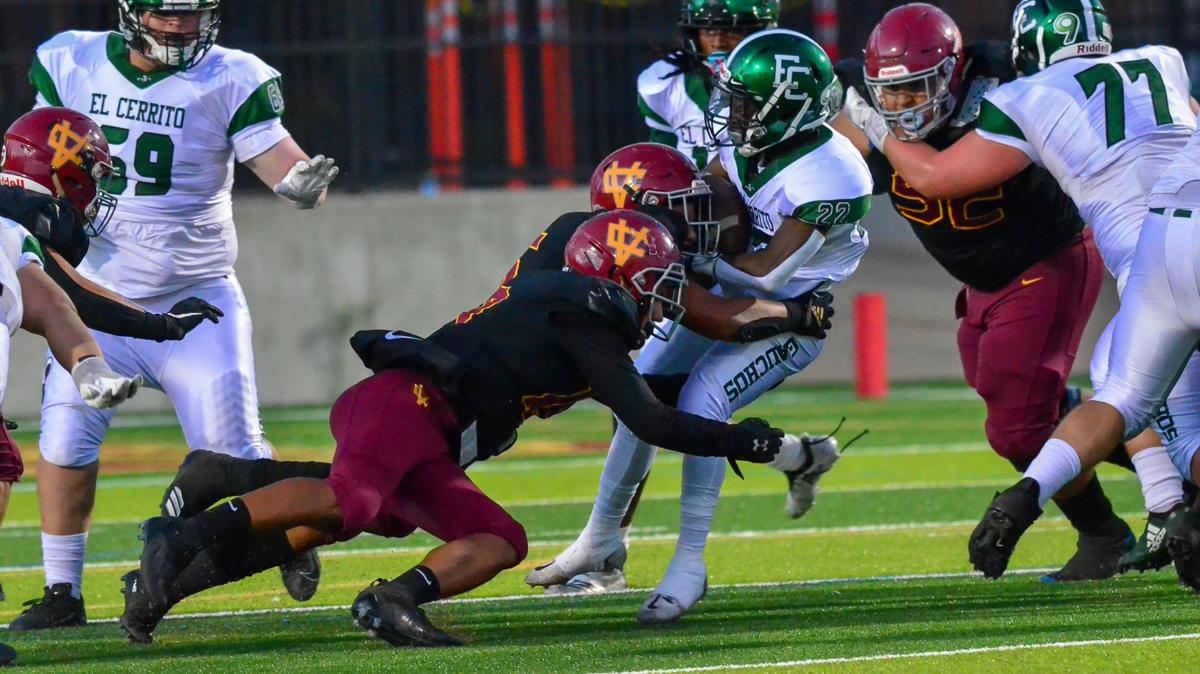 The Vintage defense gave up just 198 yards on 40 plays against El Cerrito on Friday night at Memorial Stadium. 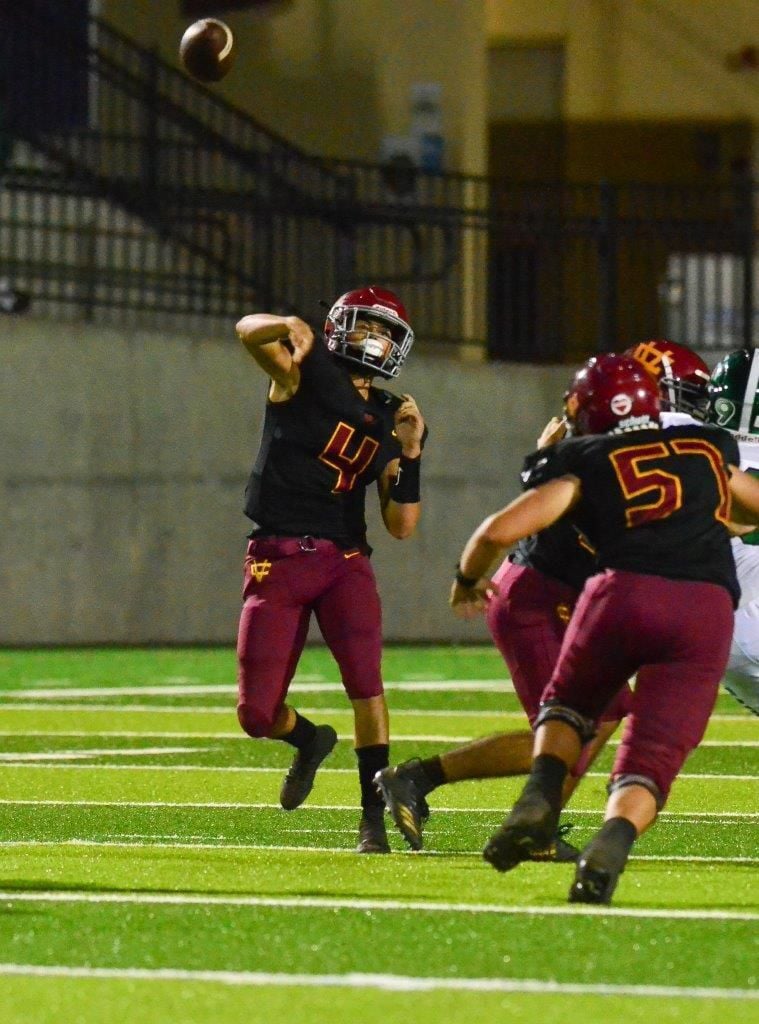 Vintage quarterback Tytan Bradley gets blocking from Owen Trethewey while passing against El Cerrito on Friday night at Memorial Stadium. 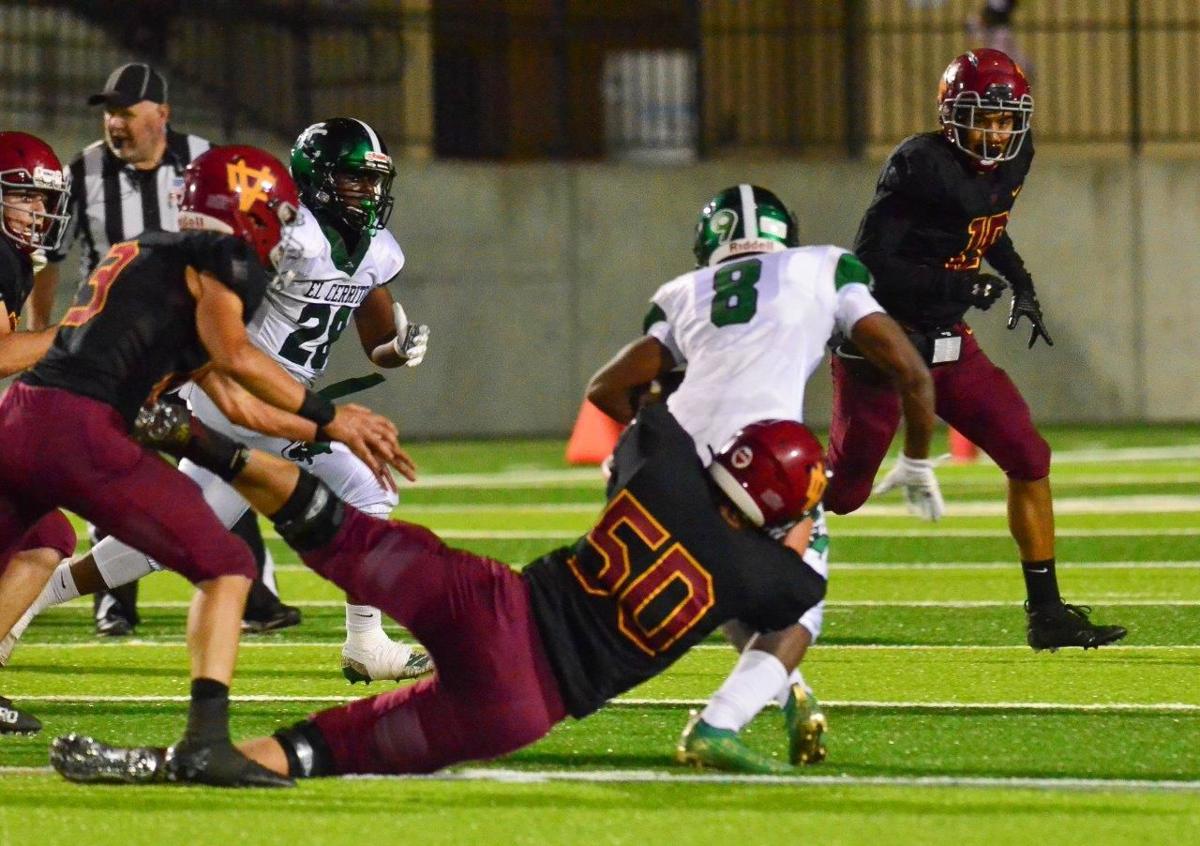 Trying to win a football game with only one of three phases playing well would be akin to trying to drink coffee with a fork.

For the Crushers, who have achieved tremendous success since head coach Dylan Leach took over in 2016, the game represented a dose of humble pie.

Leach hopes the defeat inspires his team like a season-opening 35-7 loss to Wood did for the 2018 Crushers, who reeled off 10 wins in a row after an 0-2 start — including its first playoff wins since 1986.

Vintage had not played its originally scheduled season opener at San Ramon Valley a week before due to poor air quality from Northern California wildfires and, because of the COVID-19 pandemic, the 2020-21 Crushers had played only Vine Valley Athletic League opponents in the spring and were seldom tested in going 6-0.

“This game had a lot to do with our team in general not respecting the game of football and the opponent and thinking they are better than they are,” Leach said. “They were resting on the shoulders of giants that played here the last three years. Let’s just be frank: This is on us and starts with me as the head coach, goes to my staff, and is ultimately on these kids. As a program, we didn’t execute or play hard. We thought this game was in the bag about a week ago.”

As a team, the Crushers yielded four touchdowns but only two at the expense of the defense, which was put in a compromised position throughout the night. El Cerrito’s Robert Freeman scored in a 66-yard punt return and a 41-yard interception return, and returned another punt 44 yards to Vintage 28 to set up another touchdown.

“They played well enough for us to win,” Leach said of the Crushers’ defense. “We can obviously make some changes and fixtures, but this game is not on them.”

Vintage was in it for the first 7½ minutes, blocking the Gauchos’ first extra point and getting a 5-yard touchdown run from Davis to tie it 6-6. But they came up short on the two-point conversion run and gave up the first of two short scoring runs by Antonio Hines to fall behind 12-6 at halftime.

Though the Crushers’ defense did not record any takeaways, the tale of the tape revealed El Cerrito (1-1) — which had been blanked 6-0 by Marin Catholic it its opener a week before — gaining just 198 yards on 40 plays.

On offense, the Crushers’ patented downhill, option-based running game was like a sputtering engine. Smith and Schaumkel having to exit the game with leg injuries did not help. Neither did errant shotgun snaps nor on-target shotgun snaps that were not corraled. Vintage faced unfavorable down-and-distance situations throughout the evening.

“It shakes your belief system as a play caller,” Leach said. “We had a drive with two false starts; now we’re at first and 20 for no reason. They simply out executed and outplayed us.”

The Crushers have dominated the VVAL since its inception in 2018 but have openly hunted bigger game. Vintage will face another stringent test this Friday when it visits Cardinal Newman in Santa Rosa, the same Cardinals who upended Vacaville 20-13 on Friday.

Leach is eager to find out how his team responds to adversity.

“In the third quarter, our captains and stars were on the sideline,” he said. “Any time that happens and they don’t have the wherewithal to take care of their bodies and end up cramping is unacceptable — unless you are playing full out and you’re sick, but that’s not the case. These guys are dehydrated. That takes its toll. It’s the small details that we missed. We’re going to find out next week when we play a tough Cardinal Newman team.”

The game was scoreless until the final 8:27, when the Gauchos scored two touchdowns — with failed two-point conversion tries — and a safety. The Crushers had a prime opportunity to break the scoreless tie themselves when they reached the El Cerrito 9-yard line, but an interception curtailed that threat and the Gauchos turned the miscue into their first touchdown.

Vintage Football Preview: Crushers eager to show might in playoffs

The Vintage High football team is ready to show what it can do with a strong preseason and postseason, after getting to experience neither during a COVID-shortened, 6-0 spring campaign.

Diego Davis scores Vintage's first points of the season from 5 yards out, tying the game early in the first quarter Friday night.

Vintage senior Dylan Smith, hobbled by a leg injury in the second half, finished with just nine carries for 27 yards El Cerrito on Friday night at Memorial Stadium.

The Vintage defense gave up just 198 yards on 40 plays against El Cerrito on Friday night at Memorial Stadium.

Vintage quarterback Tytan Bradley gets blocking from Owen Trethewey while passing against El Cerrito on Friday night at Memorial Stadium.