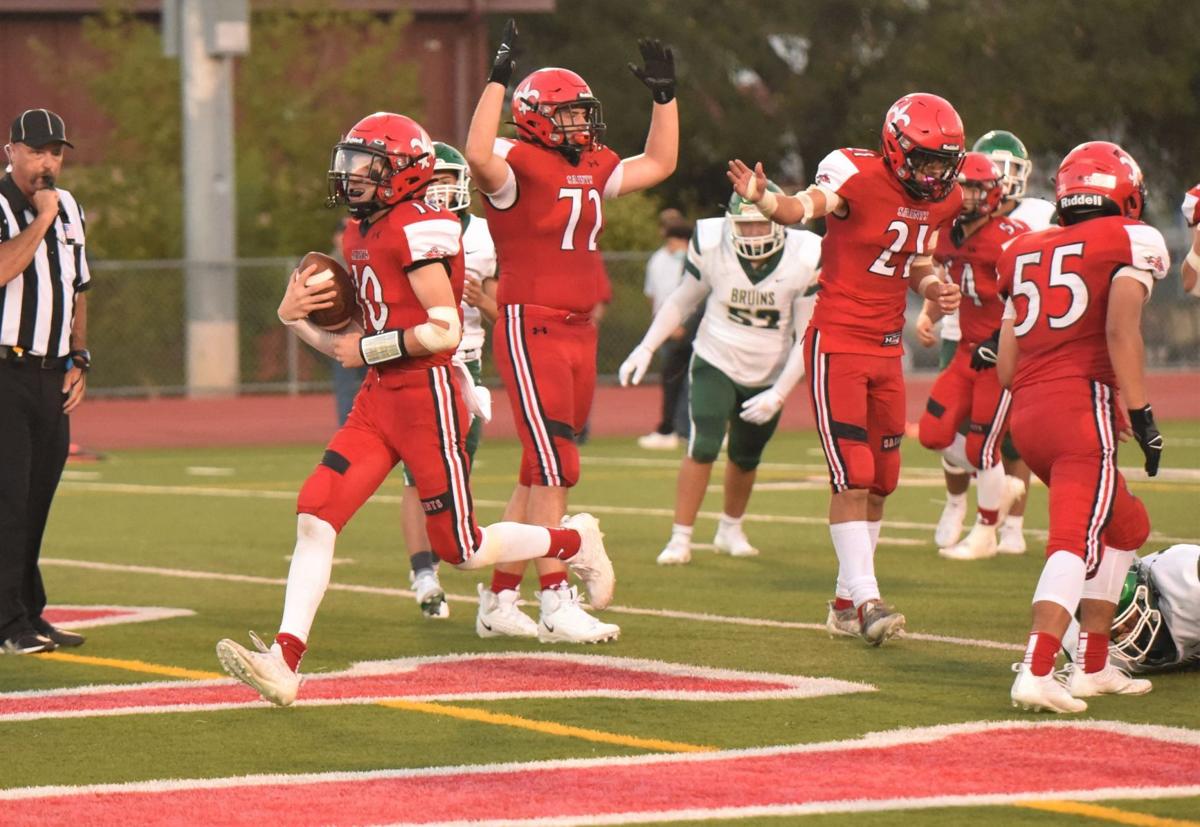 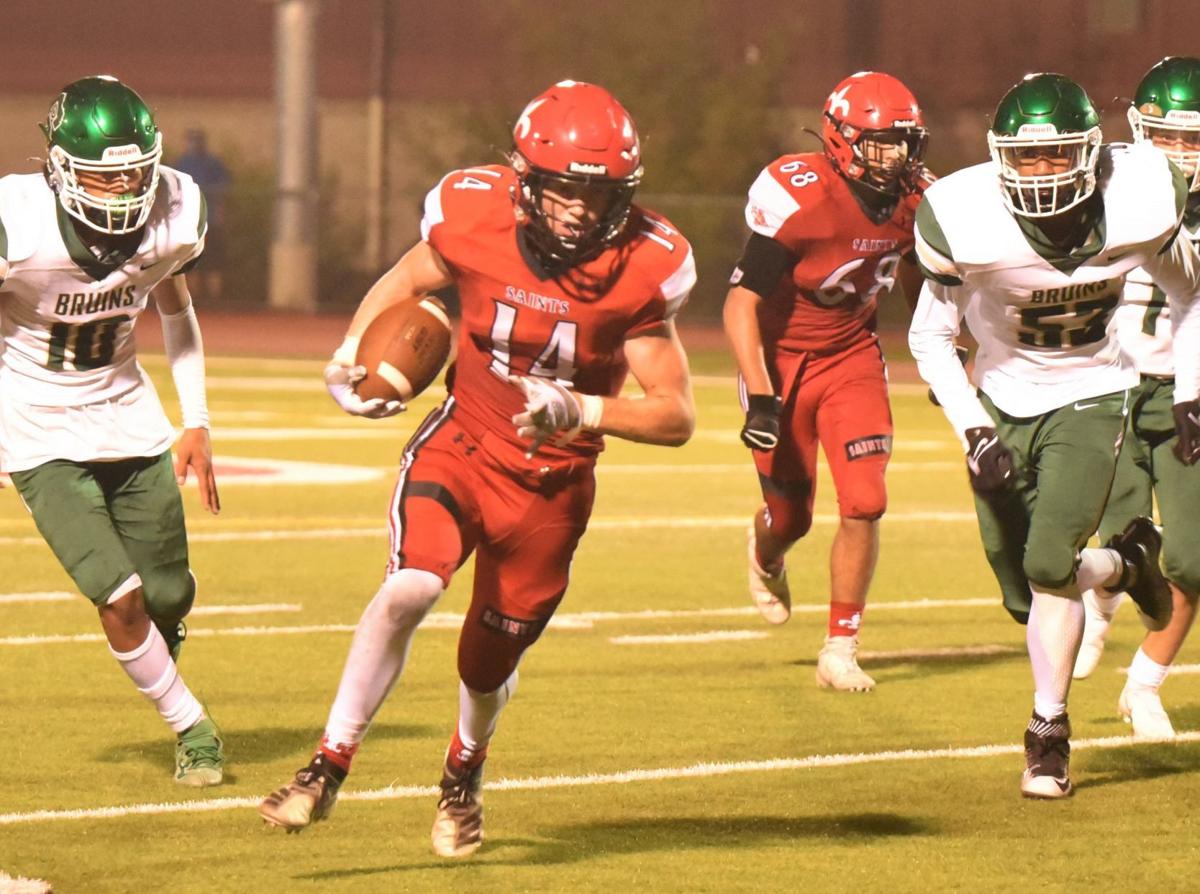 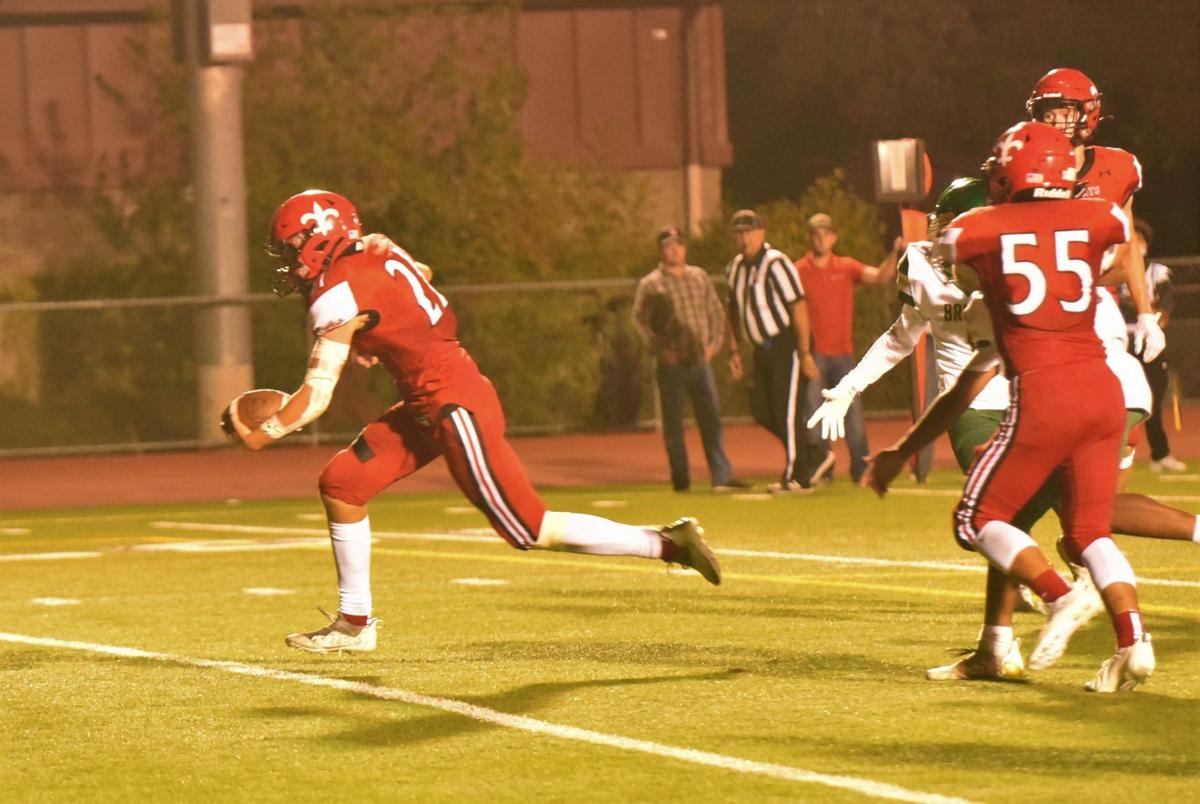 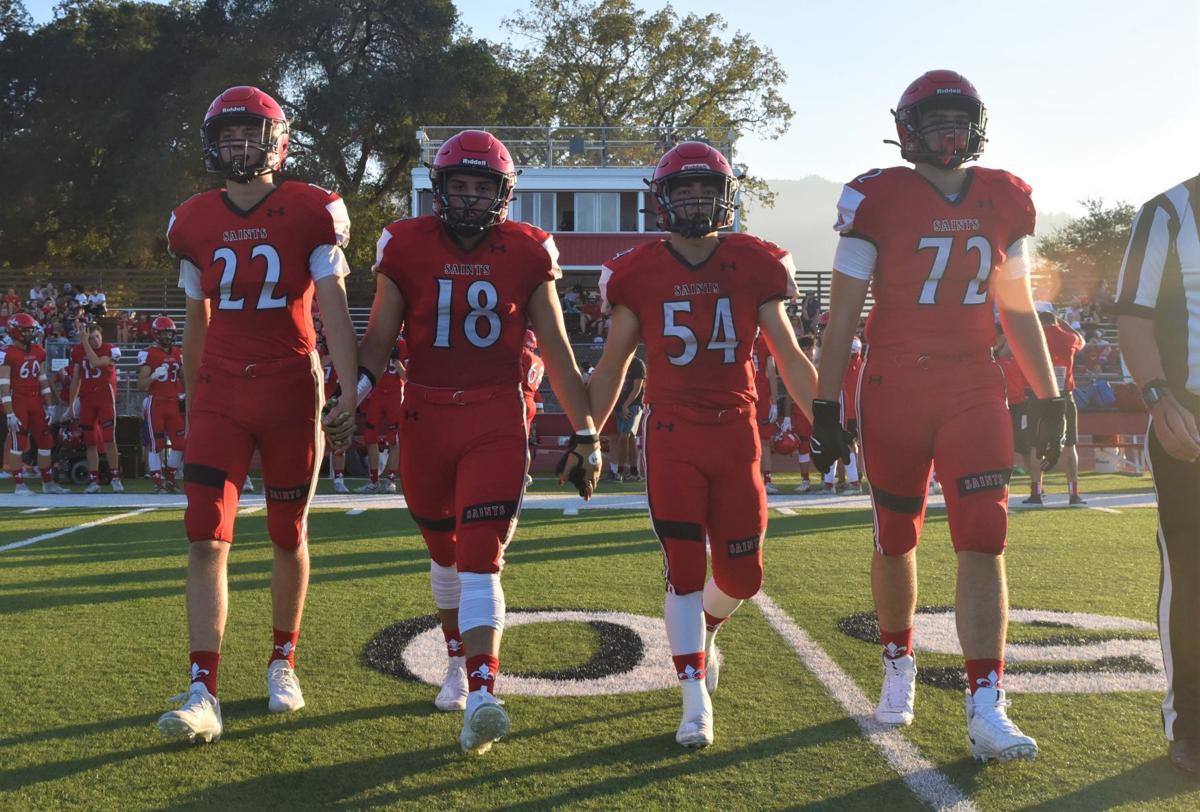 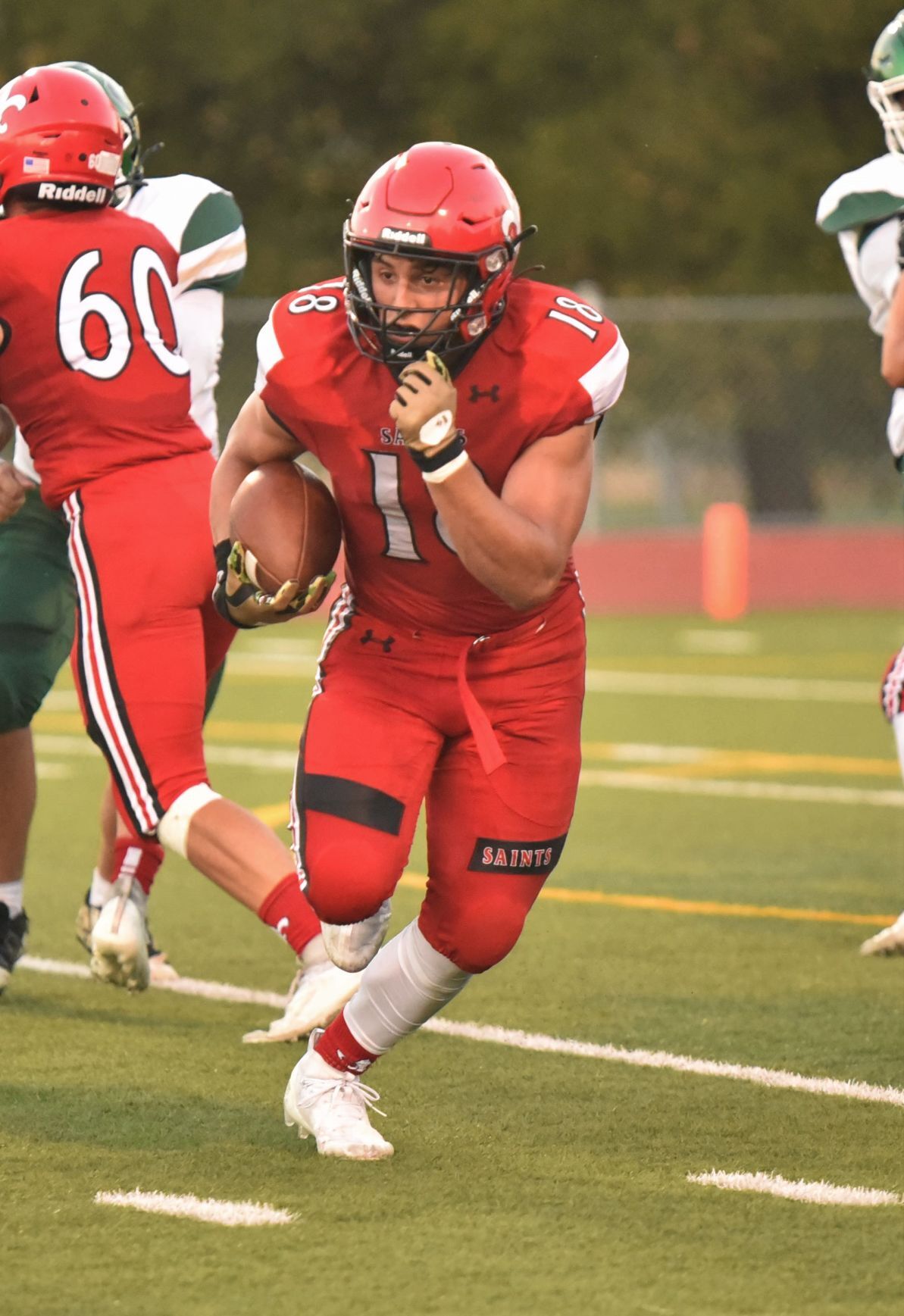 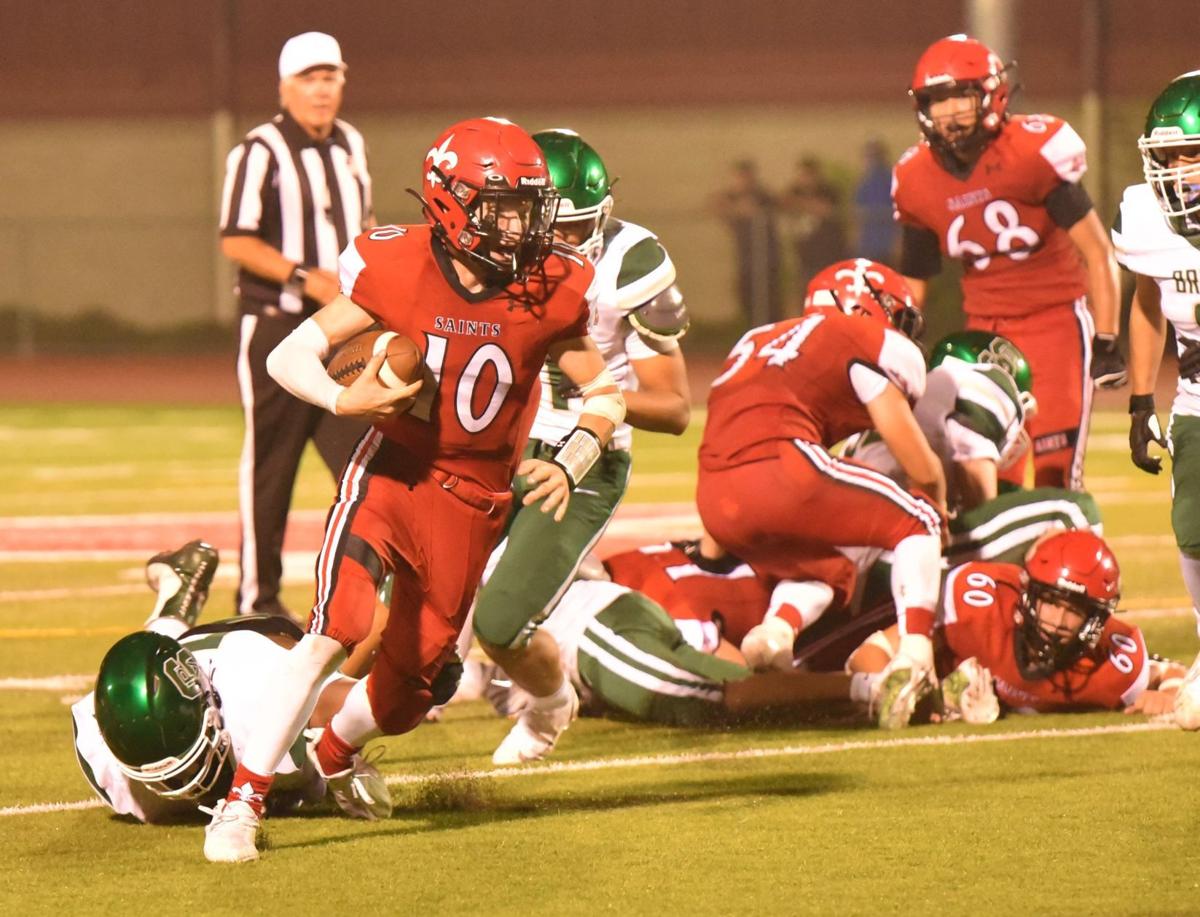 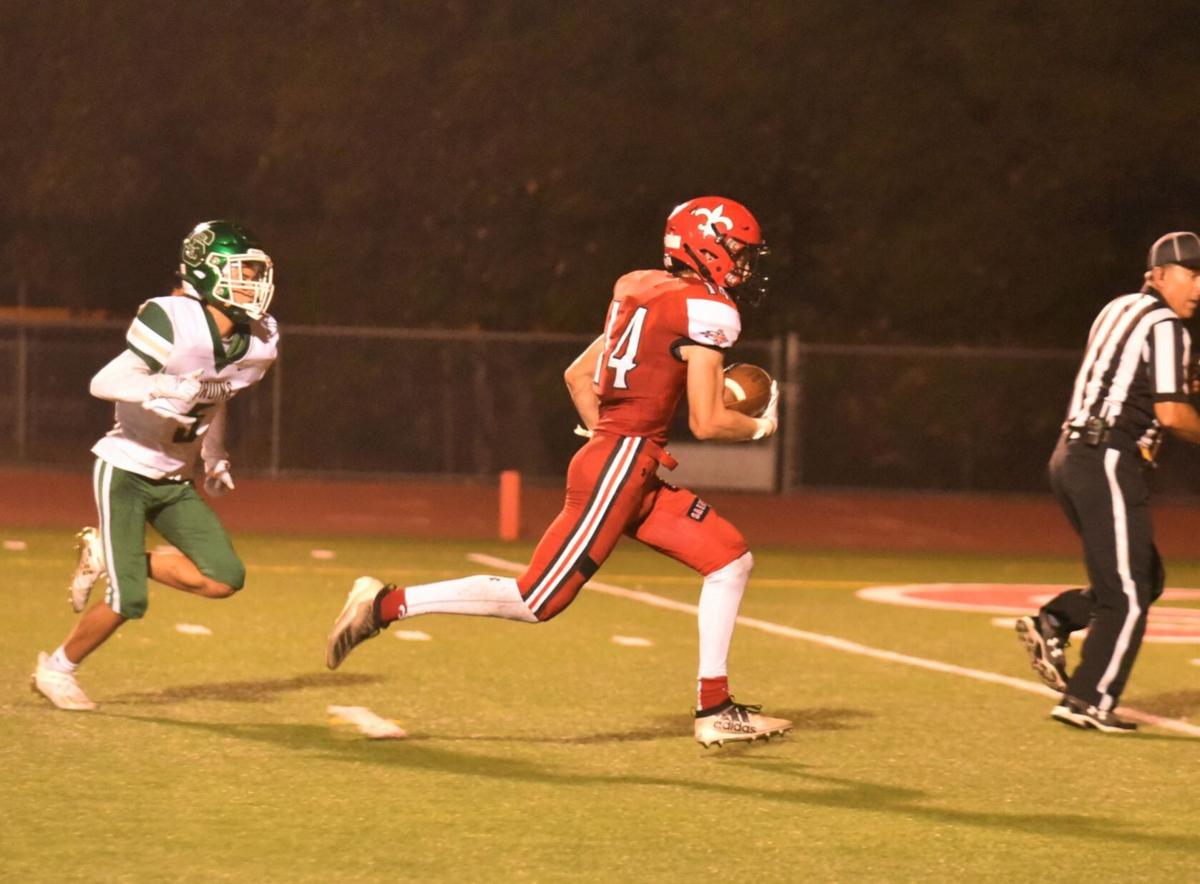 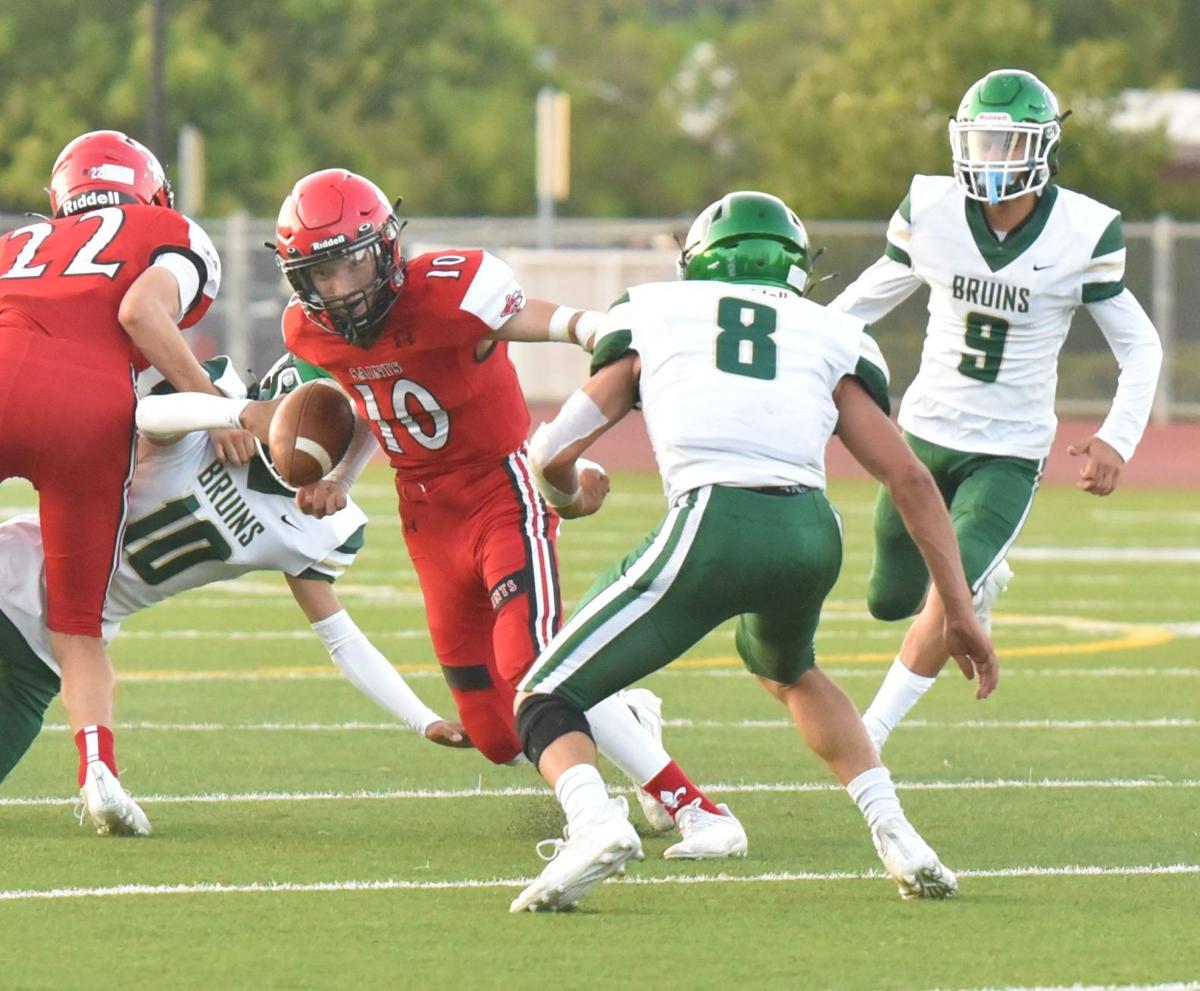 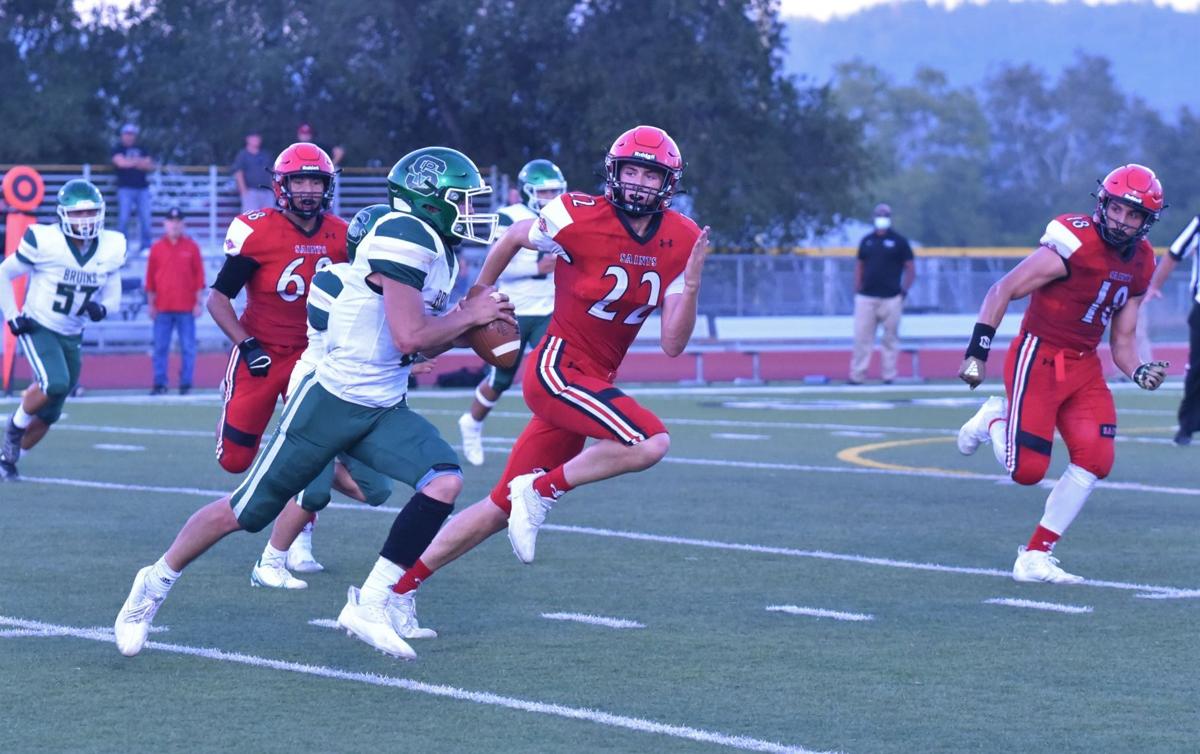 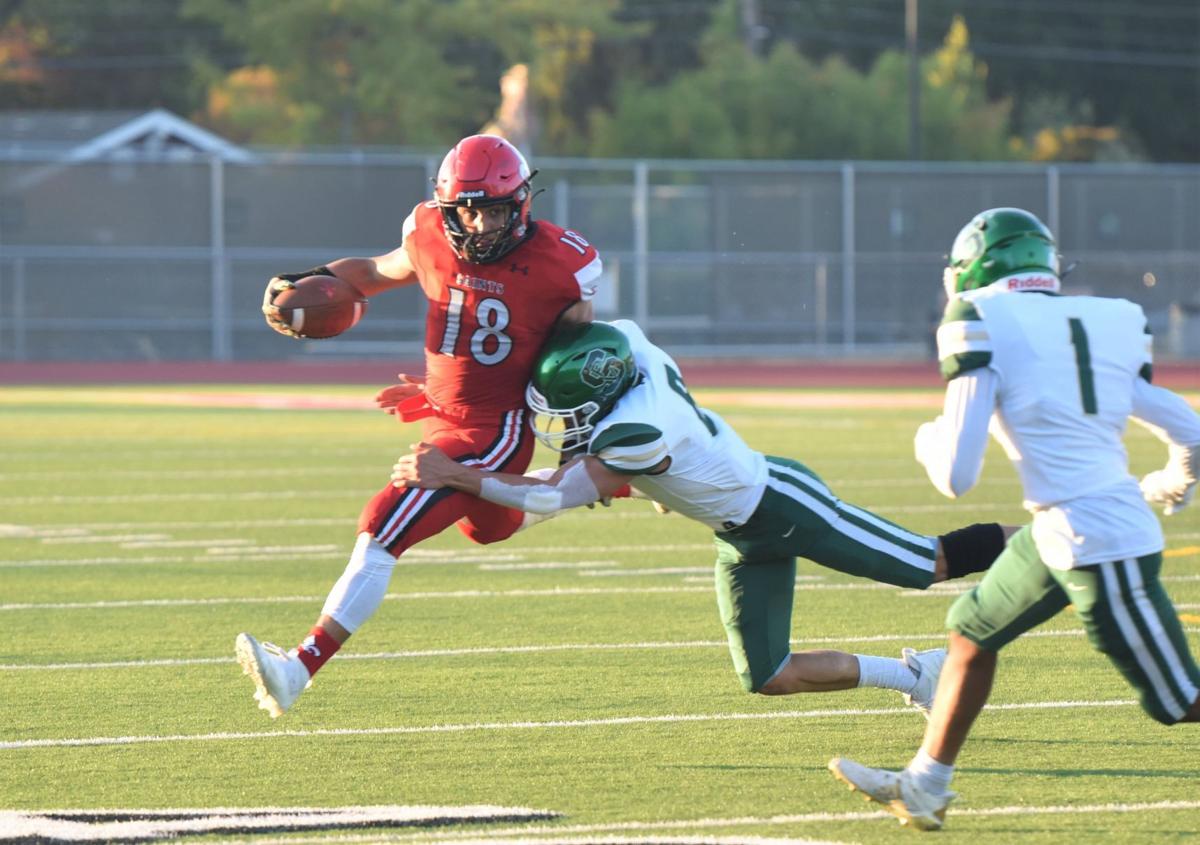 ST. HELENA — It may have been nearly two years since St. Helena last hit the field, but the Saints started right where they’d left off — even without the energy of a Friday night.

“It felt like a little unnatural at first playing on a Monday, but we've put in the work at practice and we've kind of just been prepared for this moment,” St. Helena cornerback Rehn Bothof said. “We really showed out tonight against St. Patrick-St. Vincent and I was really proud of the outcome.”

The defense was the star of the evening for the Saints, as the unit held the Bruins’ ground-based offense to only 52 rushing yards on 31 carries and intercepted St. Pat’s quarterback Wyatt Smith three times on the night.

Brandon Farrell, in his first year as St. Helena athletic director after coaching at the football helm for 12 seasons, managed to set up an action-packed tripleheader starting with girls and boys soccer games against Credo.

“What a great night, with Coach Farrell putting this together and just being able to have a Monday game. It’s a pretty cool thing for the kids,” Saints head coach Ian MacMillan said. “To have three sporting events back-to-back-to-back that was cool to see.”

St. Pat’s moved away from its triple-option style running game after having little success against the Saints’ defensive line early in the contest.

“Yeah, it was really nice to shut them down on defense,” Bothof said. “We’ve always been pretty good at defending the run, since we are mostly a running team. So we learned how to defend that pretty well. We have a really good defensive backs coach and he really gets on us on mirror press and all that stuff. There were a couple PI’s (pass interference penalties) that we could have definitely avoided, but overall I think we did a pretty good job when they started passing it a lot and we stayed focused on defense.”

St. Helena defensive coordinator Steve Vargus has had a running tradition for each defense he has coached at many stops during his prolific coaching career. Keep a zero up on the scoreboard and he will reward you with sweet and doughy zeros of his own. The Saints defense earned their sticky doughnuts and the remainder after the game had one of the loudest cheers for the players in the postgame huddle.

“Unfortunately we didn't get any shutouts two years ago when I was on JV,” Bothof said. “I got brought up for playoffs and we still didn't get any shutouts. But I’ve heard that it's pretty nice and rewarding. Especially so because I also got an interception, so I get a milkshake as well, so I’m looking forward to it.”

Head coach Ian MacMillan talked before the season about the depth the Saints would have in the backfield and it was on full display Monday evening. Star running back Ivan Robledo racked up 88 yards and two rushing touchdowns in the first half on 10 carries, but didn’t see a touch past the break. Harrison Ronayne and Keaton Smith filled the void perfectly and kept the offense moving forward. Ronayne had a team-high 128 rushing yards while grabbing a score. Smith wasn’t far behind with 98 rushing yards on 9 carries, finding the end zone twice in the fourth quarter.

“I thought Keaton ran hard and it took him a couple snaps to kinda figure it out. This is his first time playing running back, but you know he got going. We just have to speed him up a little bit,” MacMillan said. “With running backs, it's just the idea of trusting each other and understanding that you know somebody's always got to fill in when needed and it’s next man up. That is the way it is and we’re going to run and we’re going to run it right at you. It's up to you whether or not you're willing to stop us or not.”

Even while forcing a running clock early in the fourth quarter and outgaining the Bruins by a 3-to-1 margin in total yardage, MacMillan feels his offense is still in first gear and has a ways to go. Multiple penalties erased a few big gains by the unit, which is still greasing up the gears of the veer offense.

“I think defensively we looked good,” he said. “Offensively I thought we looked slow and we were unaggressive. We got going a little bit better at the end, but that isn’t who we are. So there are things we have to clean up offensively.”

It may just be one night, but the Saints appear to have a capable quarterback under center in Spencer Printz. The senior fooled a number of defenders while making decisions in the high-IQ veer. Even at just 5-foot-11 and 165 pounds, he wasn’t afraid to crash into would-be tacklers and fight for extra yardage.

St. Helena led by only six points after the first quarter, but took an 18-0 advantage into the halftime break. The Saints never seemed endangered by a Bruins offense that managed to break into the St. Helena red zone only once — with a drive that ended with an interception by Bothof.

“It’s the kind of thing we've just strived for all year long, the idea that defense wins championships. So we’ve got to be aggressive out there and I think we were, which was super impressive,” MacMillan said. “We’ve just got to get that same mentality now back on the offensive side of the ball, something I gotta fix.”

The Saints have little time to prepare for their next opponent, as they travel to Winters this Friday night.

“I’m really thankful for everyone coming out,” Bothof said. “It's our first time coming back for football and it's been two years, and yeah I’m really looking forward to seeing how the season goes with my teammates. We’re like family and I really appreciate everyone.”

St. Helena High football players are optimistic after losing a season to the COVID-19 pandemic and their head coach after 12 seasons. Ian MacMillan returns to the Saints' varsity helm for the first time in 15 years with a mission to get them to the third round of the playoffs with staunch defense.

With only three days of practice since its season opener, the St. Helena High football team continued to show finesse, power and strength as it downed Winters on the road Friday, 35-21.