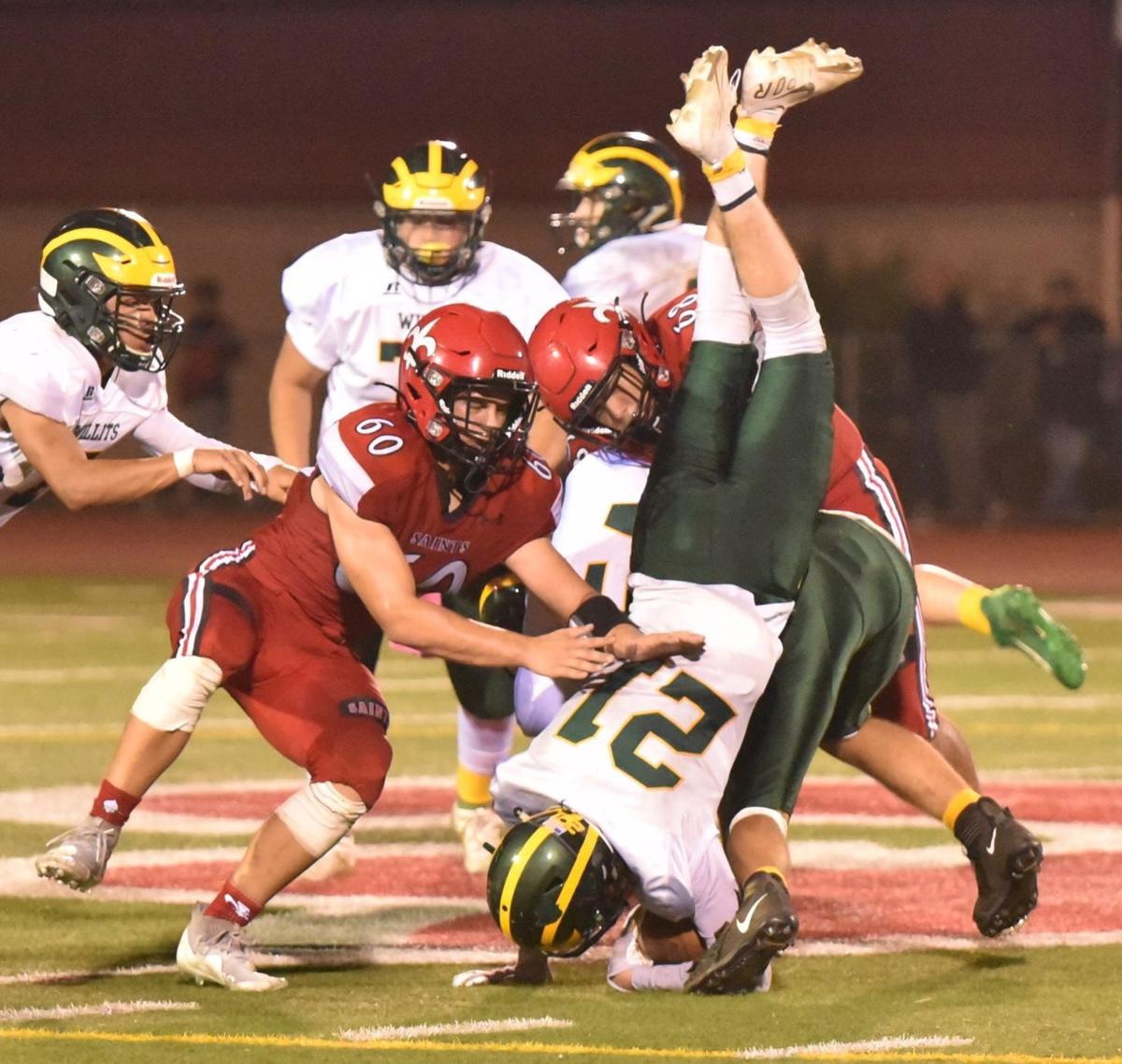 St. Helena's Jadon Meyer (60) and Alexzander Svenningsen upend a Willits running back with the help of his teammate Friday night. 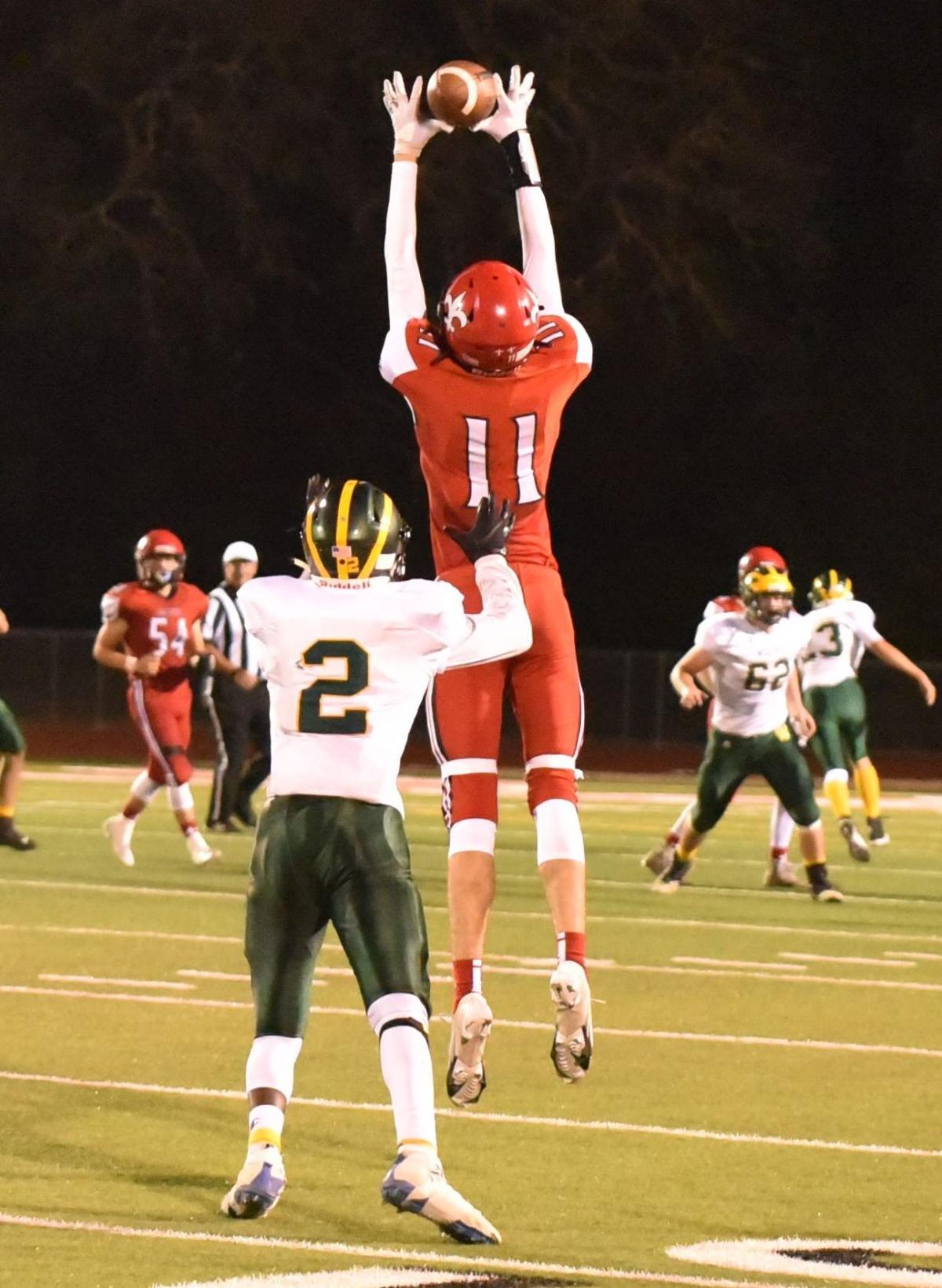 St. Helena's Charlie Knight extends his frame, but the pass goes through his fingertips Friday night.

ST. HELENA — Head coach Ian MacMillan wants his St. Helena High football team to be self-motivated and consistent, not wait for the opponent to back the Saints into a corner first.

Winless Willits did that Friday night, recovering a fumble on St. Helena’s game-opening possession, moving the ball downfield and grabbing a quick lead.

The Saints responded by scoring on their next two drives and cruising to a 28-6 victory in their North Central League I opener at Bob Patterson Memorial Field.

Right now we’re kinda like a wave,” MacMillan said after the Saints improved to 3-1 overall. “We play well and then we don’t play well. We’re just kinda sporadic right now. We’ve got to figure out how to maintain the effort on the field not for spurts but the whole game.”

Both teams were called for being offsides several times.

“We started changing up the snap count because obviously they were jumping more than us, but it’s a work in progress,” MacMillan said.

After the Wolverines (0-4 overall) missed their point-after-touchdown attempt, St. Helena took the ensuing kickoff, held onto the ball, marched down the field, and took a 7-6 lead on a 1-yard touchdown run by Ivan Robledo and first of four PATs by Rehn Bothof.

On their next possession, the Saints drove 47 yards down the field with Spencer Printz scoring on a quarterback keeper from 18 yards out to make it 14-6 with 1:33 left in the first quarter.

Late in the second quarter, a Cal Lehman interception gave the Saints great field position. Harrison Ronayne ran it in from 32 yards out, and St. Helena went into the halftime locker room with a 21-6 lead.

In the third quarter, the Saints put together a long drive fueled by a 15-yard run and a 20-yard reception by Robledo. Quarterback Spencer Printz capped it off by finding Vincent Altemus with a 20-yard scoring strike and 28-6 lead.

Willits tried to end the game with a touchdown to make its long drive back feel a little shorter. But St. Helena stopped the Wolverines at its 9-yard line on fourth down with 3:16 to go.

“I thought Spencer played a good game throwing the ball. I thought he did a really good job coming back from St. Vincent’s week,” he said of Printz throwing his first two interceptions of the season in a 14-13 home loss to the Mustangs the previous week. “We worked on that.”

“Our running back group got to rotate in, but you’ve got to hold onto the ball. I thought Charlie Knight played really well. Defensively, I thought our corners did a good job.”

The Saints travel to Lower Lake next Friday and to Cloverdale on Oct. 8, the Saints return to Patterson Field on Oct. 15 to host Clear Lake.

“Lower Lake is big and fast,” McMillan said. “We’ve just got to focus on ourselves. We’ve got a lot of improving to do, in our opinion. We hold ourselves to a high standard. I don’t think we played as fast as we could tonight. We played kinda slow. So those are things we’ve got to figure out this week and fix.”

Ivan Robledo ran for 160 yards and three touchdowns in just nine carries as the St. Helena High football team shut out Lower Lake on the road Friday night in a North Central League I contest.

The St. Helena High football team took care of business Friday night as its 49-6 win at Cloverdale set up next week's visit from Clear Lake, the winner of which should be in the driver's seat for the North Central League I title.

St. Helena's Jadon Meyer (60) and Alexzander Svenningsen upend a Willits running back with the help of his teammate Friday night.

St. Helena's Charlie Knight extends his frame, but the pass goes through his fingertips Friday night.