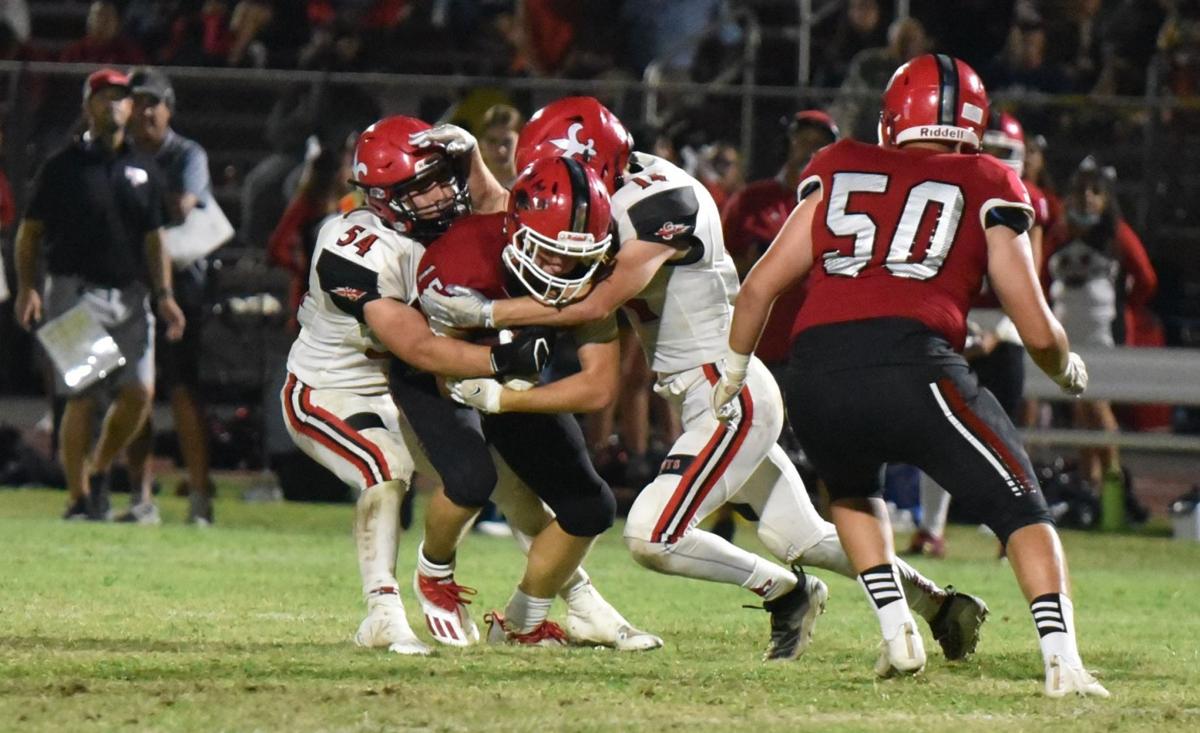 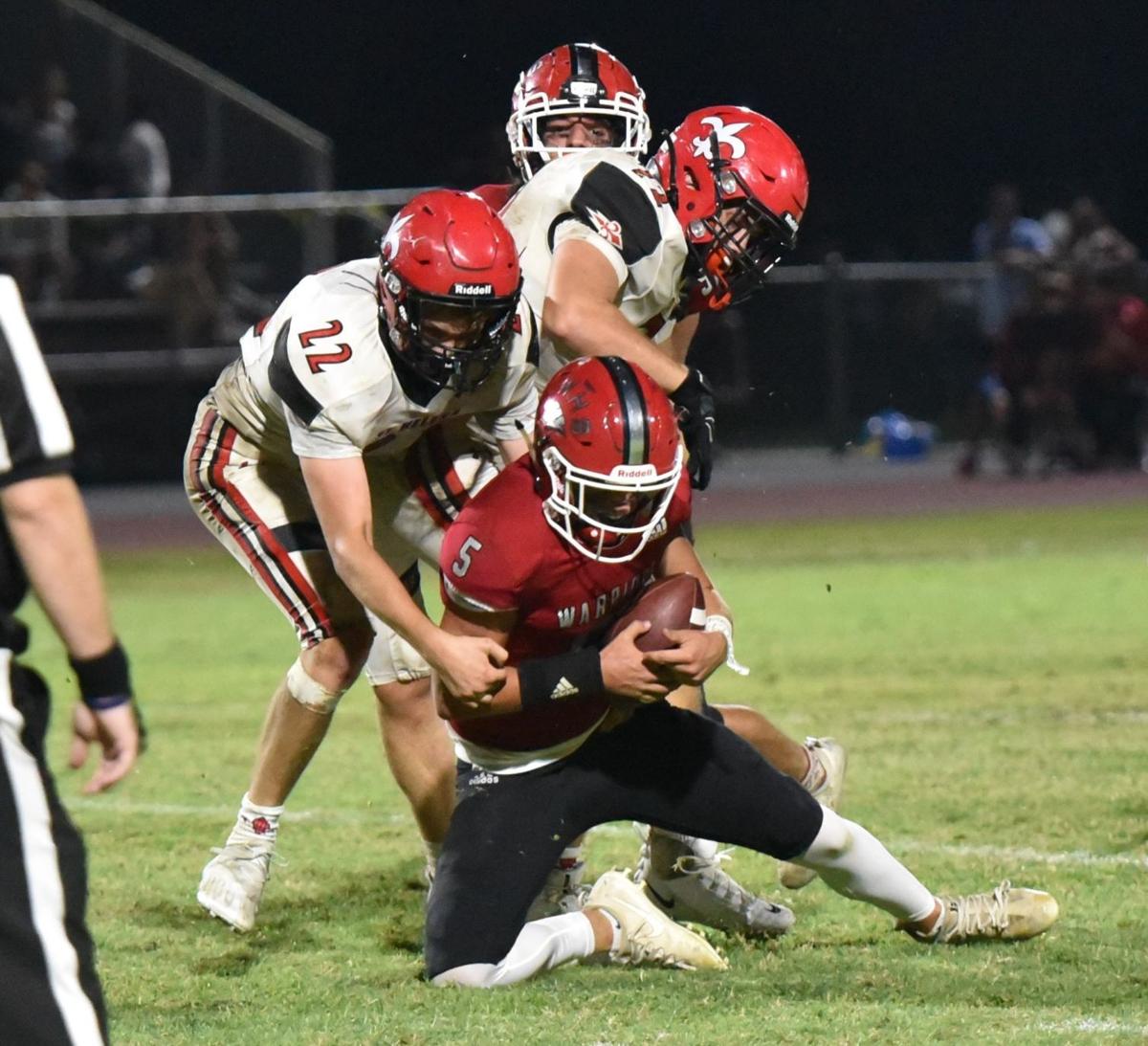 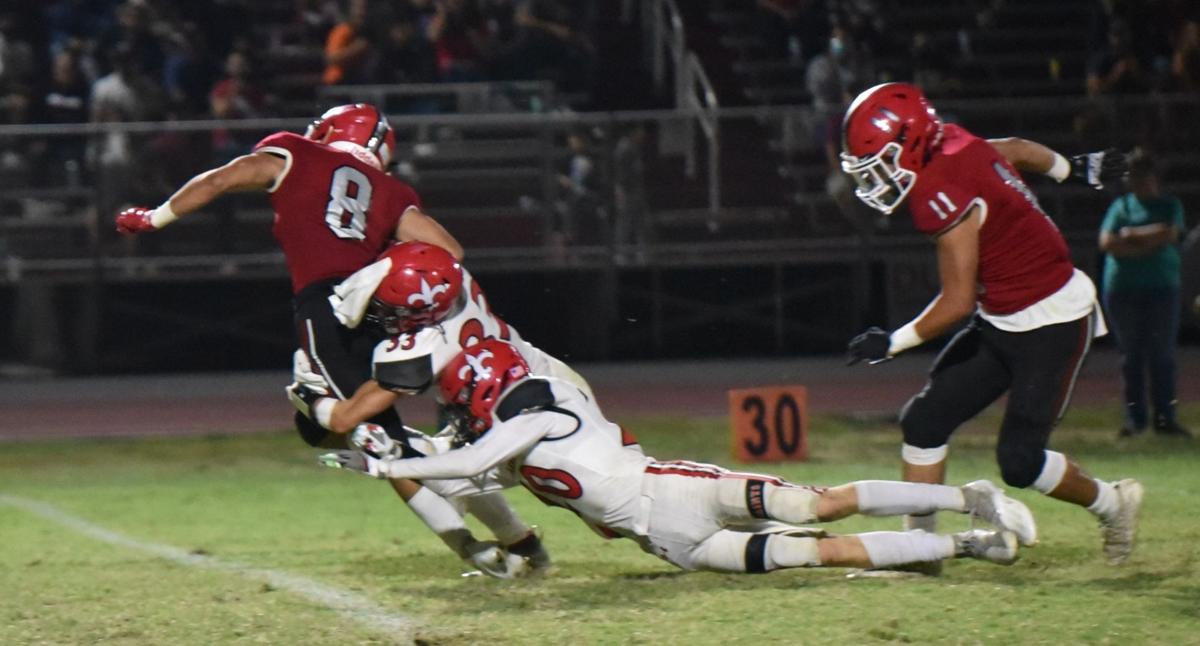 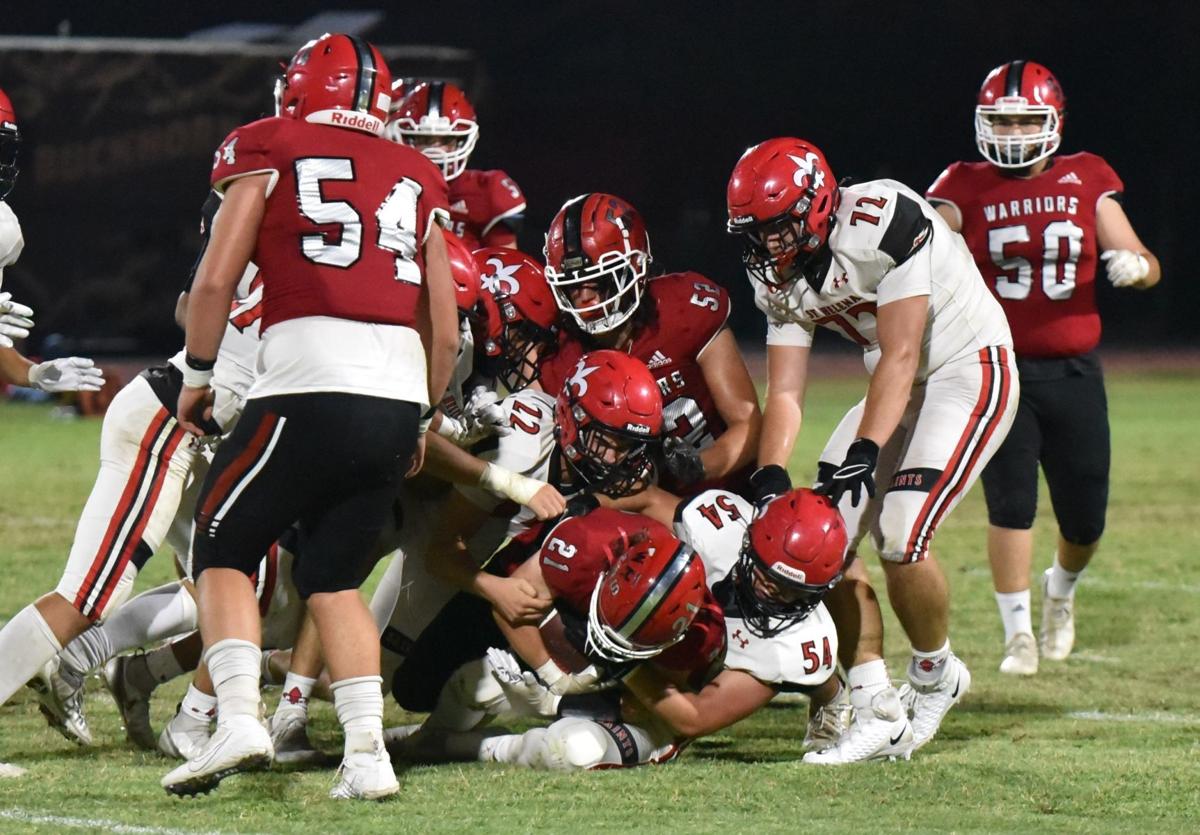 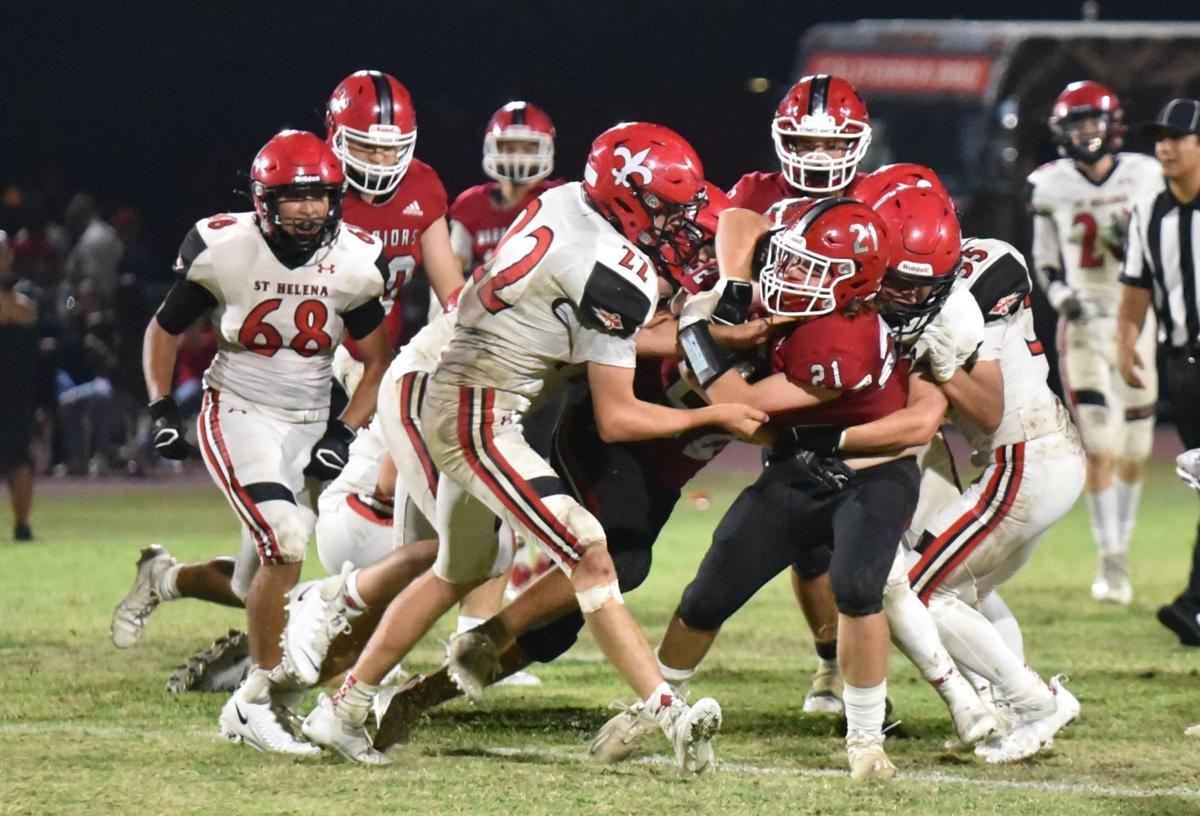 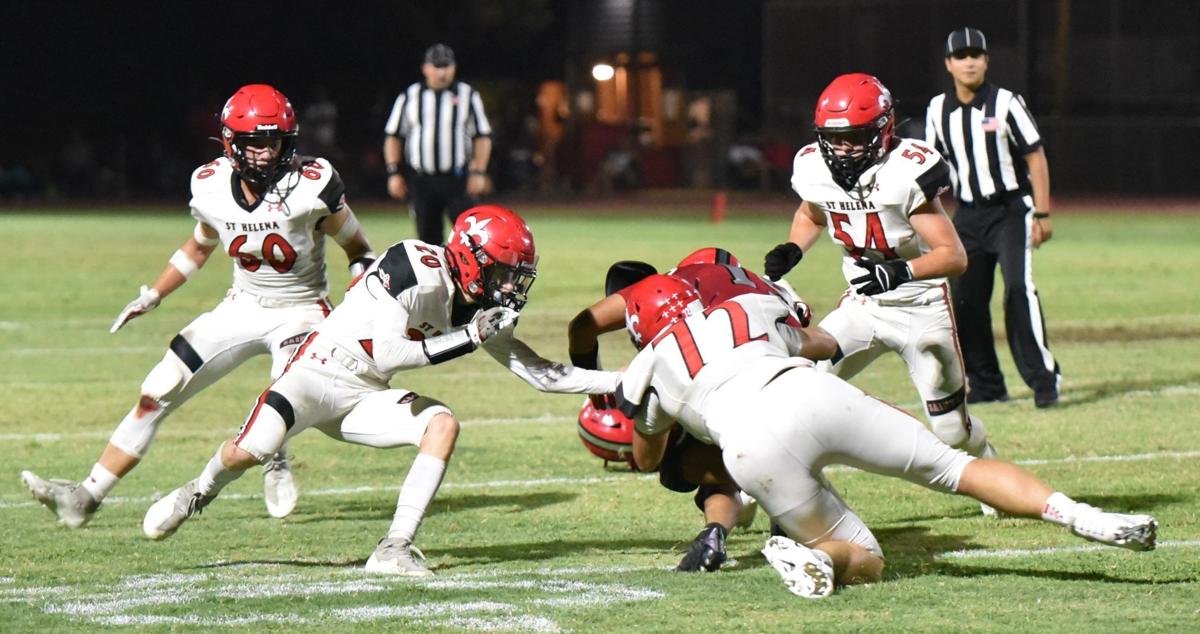 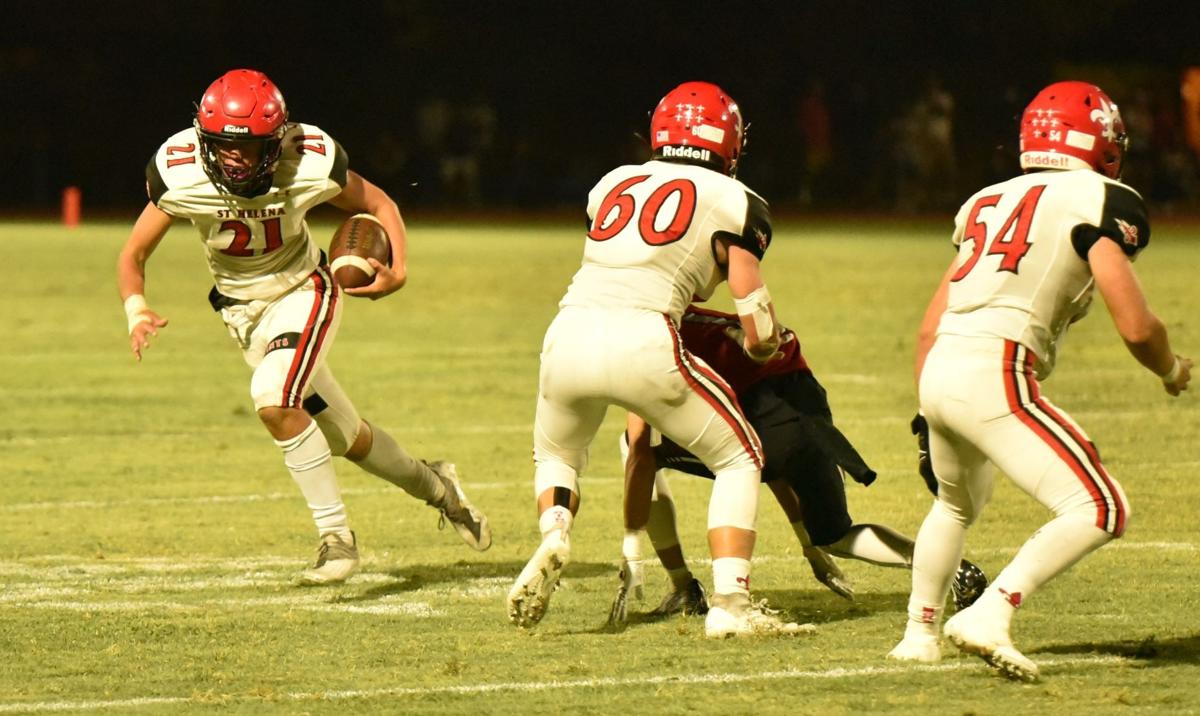 St. Helena's Harrison Ronayne gets blocking from Jadon Meyer (60) and Orlando Segura (54) on a run Friday night in Winters. 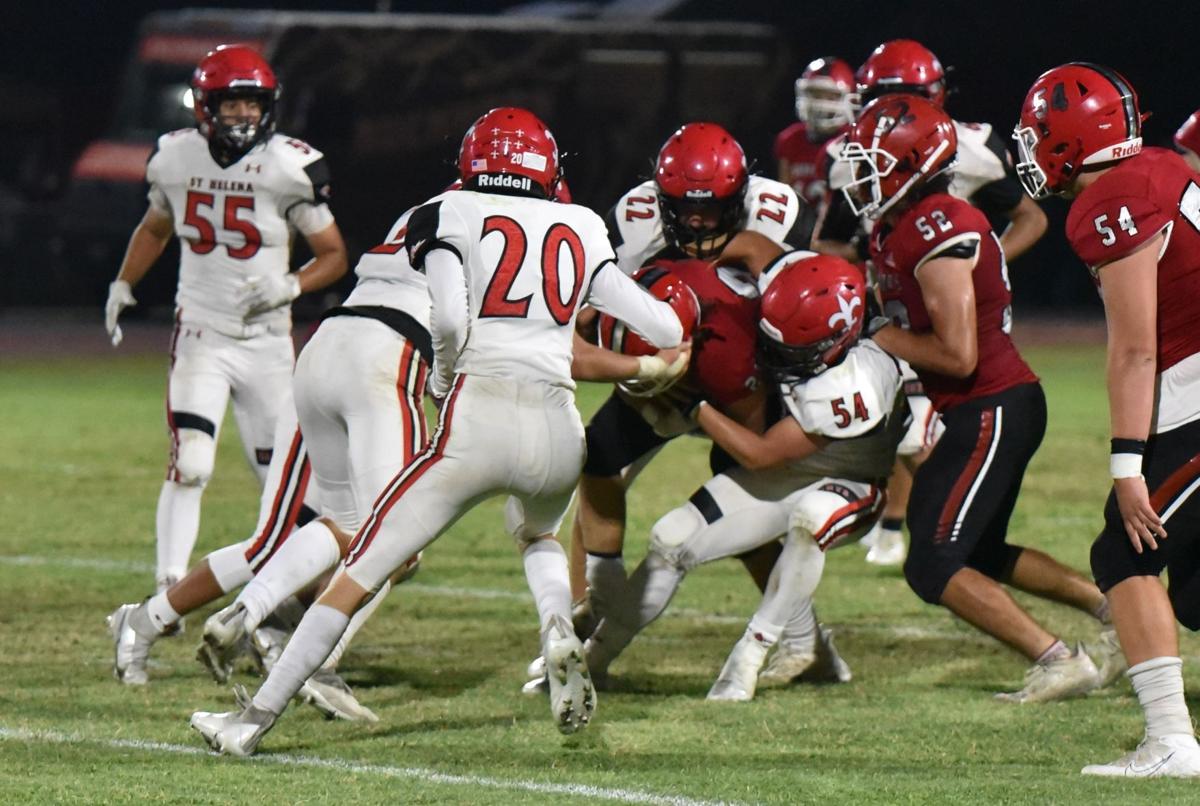 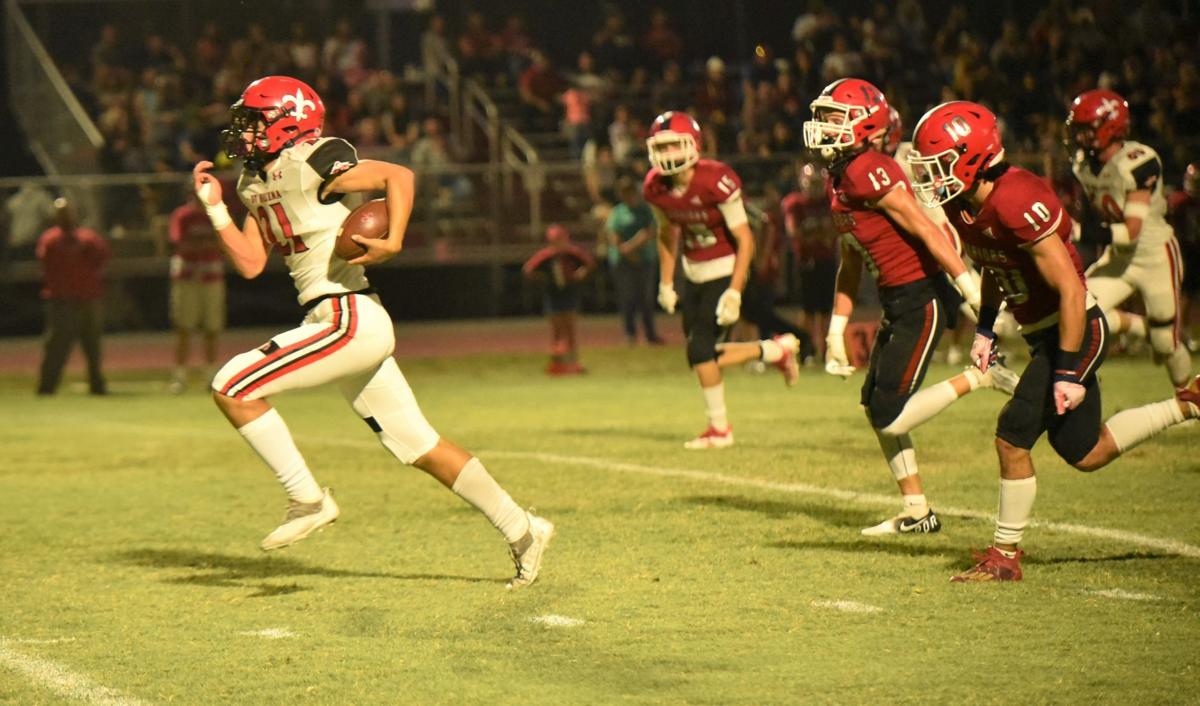 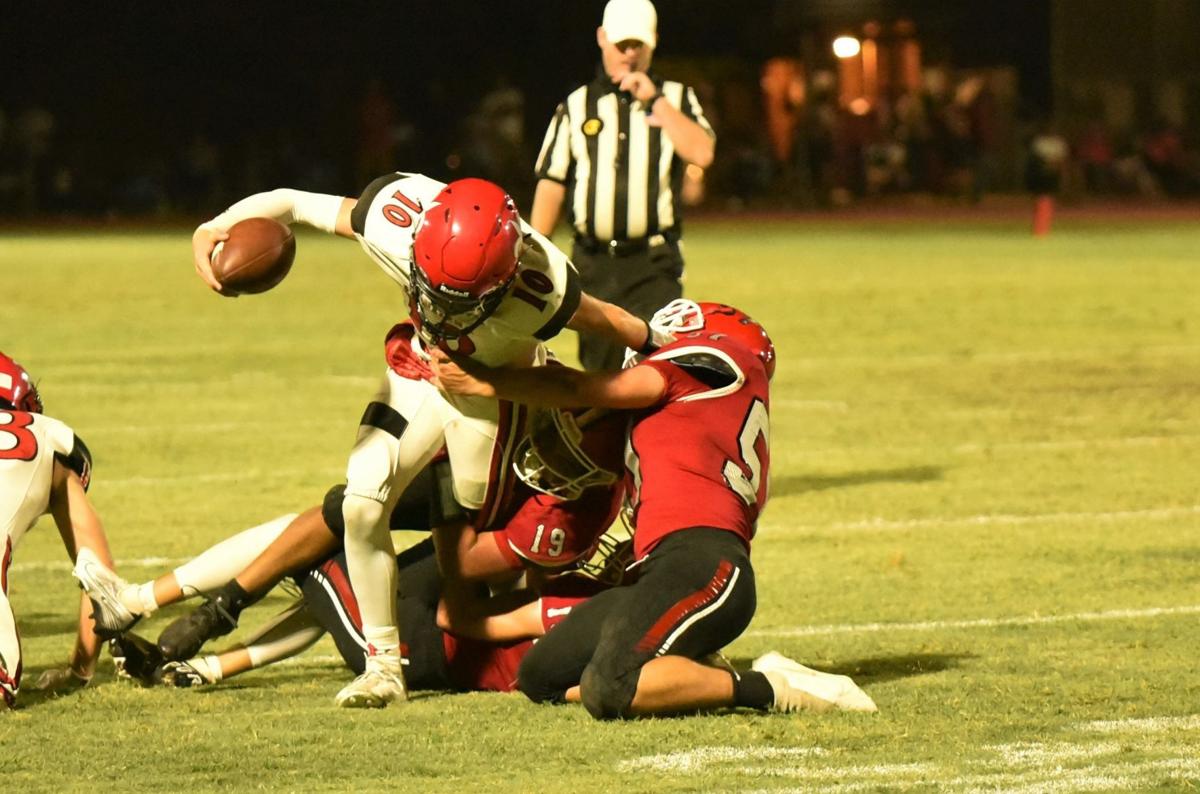 St. Helena quarterback Spencer Printz is wrapped up by Justice Madsen (19) and other two other Warriors on Friday night in Winters.

WINTERS — With only three days of practice since its season opener, the St. Helena High football team continued to show finesse, power and strength as it downed Winters on the road Friday, 35-21.

Saints head coach Ian MacMillan thought it was a quality win over a strong and very physical Warriors squad (1-1) that had won its season opener the previous Friday over Dixon, 37-24.

The Saints (2-0) were coming off Monday’s 38-0 home shutout of St. Patrick-St. Vincent, which had originally been scheduled to be played the previous Friday in Vallejo but was postponed and moved due to unhealthy air from Northern California wildfires.

"It was a quality win," MacMillan said. "Winters is a great team, very physical, and it was a long drive. We had to go a different way, through Napa instead of over the hill, because of the buses. So we had to go through BottleRock traffic and all that stuff, and we played a game on Monday and then had three days to prepare for this one. It was a challenge, but the kids definitely played really well."

Senior Harrison Ronayne finessed his way past the Winters defense for the game’s first touchdown, which Rehn Bothof followed with the first of five extra points for a quick 7-0 lead. Winters quarterback Matt Moore threw for two touchdowns in the first half, but the Saints’ Keaton Smith had a key interception at the end of the second quarter that allowed the Saints to take a 21-14 lead into the locker room.

St. Helena defensive coordinator Steve Vargus made some key changes at halftime that allowed the Saints to pretty much control the second half.

"Coach Varg made some adjustments on defense in terms of what they were doing and in the second half we gave up one score, and that was towards the end," MacMillan noted. "I thought Cal Lehman and Henry Dixon on the defensive line played really, really well, making some big, key sacks, and Vinnie (Altemus) at DB and receiver had a good game."

Senior quarterback Spencer Printz was a perfect 6 of 6 passing.

St. Helena's Harrison Ronayne gets blocking from Jadon Meyer (60) and Orlando Segura (54) on a run Friday night in Winters.

St. Helena quarterback Spencer Printz is wrapped up by Justice Madsen (19) and other two other Warriors on Friday night in Winters.