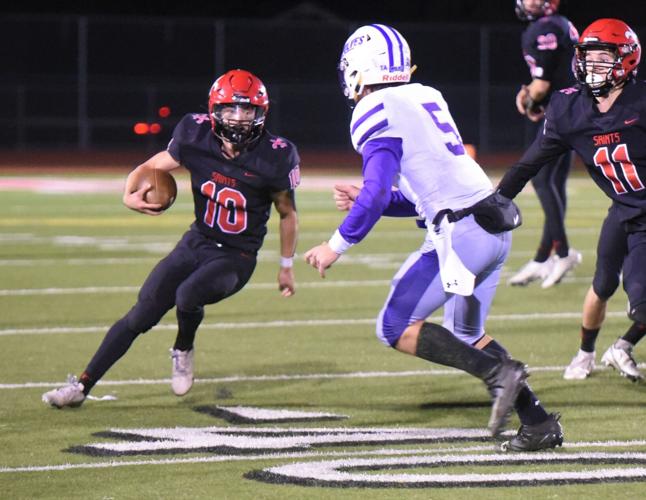 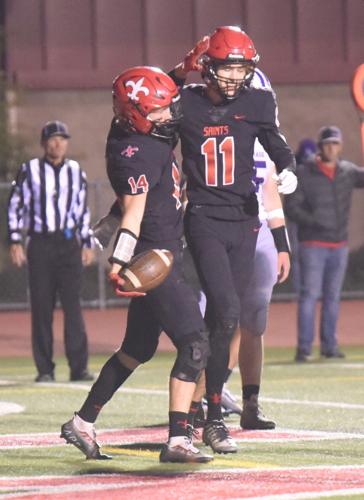 St. Helena's Charlie Knight (11), shown congratulating Keaton Smith (14) on his touchdown run against Fort Bragg on Oct. 28, caught a pass for the Saints' only touchdown against Middletown on Friday night. 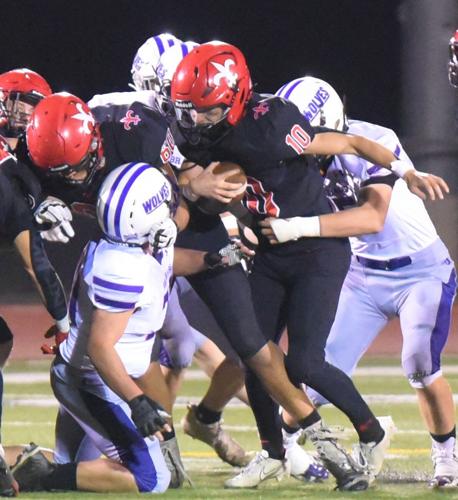 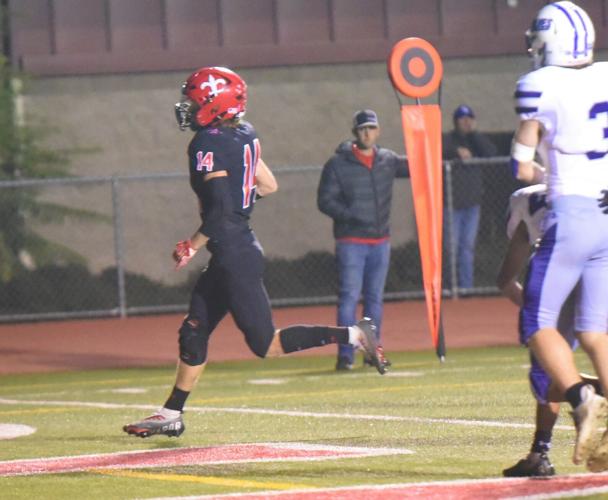 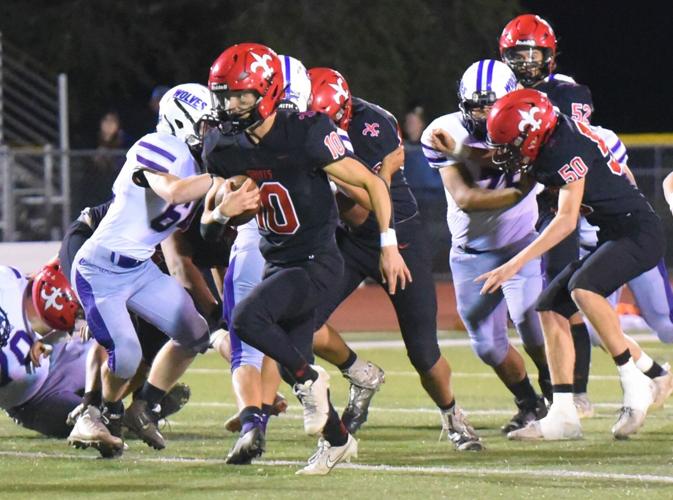 St. Helena's Clayton Crean (10) gets running room thanks to blocks from Jake Salling (50) and others against Fort Bragg on Friday night. 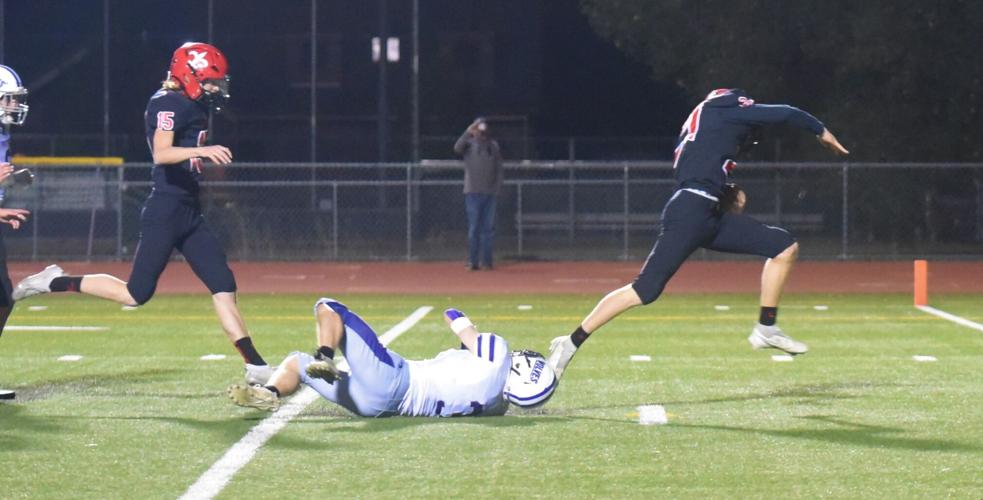 St. Helena's Sam Raunegger, right, gets past Fort Bragg's Brady Pyorre, on ground, at the end of a 26-yard touchdown run before Tom Woods (15) kicks the extra point for a 14-6 lead.

ST. HELENA — On a brisk night, the St. Helena football team pulled a game out of the fire in time to live to fight another day in a 21-20 North Central League I win over the Fort Bragg Timberwolves on Friday night.

The Saints (4-5, 2-4 NCL I) kept their North Coast Section Division 7 playoff hopes alive and now need to win next Friday night at Middletown, which lost 14-6 to red-hot Kelseyville, to have a chance at qualifying for the postseason.

“It was nice to pull one of those out,” St. Helena head coach Ian MacMillan said matter-of-factly after the game at Bob Patterson Memorial Field.

St. Helena achieved the crucial win thanks to a sturdy second-half defense that allowed nary a point and three pivotal plays encompassing both sides of the line of scrimmage.

After giving up 20 points in the first half, defensive coordinator Steve Vargus and the Saints bowed their necks and got enough stops to allow a mistake-prone offense to get the go-ahead score. Thomas Herdell’s 6-yard touchdown run followed by one of Tom Woods’ three extra points put St. Helena in front 21-20 with 7:07 remaining in the game.

“We started making tackles,” MacMillan said. “In the first half, we missed a lot of tackles and took bad angles. On pass plays, we had times where we would have eyes in the backfield and not cover the right guys. Coach Varg talked about those things at halftime.”

No sooner did the Saints recapture the lead, the Timberwolves threatened to spoil St. Helena’s season.

Fort Bragg moved the ball from its 40-yard line to the Saints’ 18, where it faced fourth down and 7 to go. St. Helena sophomore linebacker Sam Beck, called up from the JV team earlier this season, blitzed through the Timberwolves’ line and sacked Chance Tager for a 5-yard loss with just north of three minutes left in the game, giving the Saints possession at their own 23. Moments later, Herdell ripped off a 53-yard run to the Fort Bragg 26.

Though St. Helena eventually had to turn the ball over on downs at the Fort Bragg 14 with 43 seconds left in the game, it was able to flip the field position to its advantage.

“That was a big play in terms of being able to read the veer,” MacMillan said. “Nobody knew he had it and it was nice that we didn’t have an inadvertent whistle. That was a good way to put some yardage behind us. That way, they had to go the length of the field with 43 seconds left.”

With no timeouts and 43 seconds remaining, Fort Bragg was 86 yards from the goal line. But a Micah Marquez interception put a bow on the Saints’ season-saving win.

St. Helena allowed just 267 yards on 48 plays. Clayton Crean had another active game defensively with a tackle for a loss and four impact tackles (gains resulting in 1-3 yards). Charlie Maldonado, Isaiah Williams and Jadon Meyer each had two impact tackles, and Jake Salling, Marquez, Bryan Alfaro and Marquez each had one. Salling also had a blocked extra point.

Like they did on defense, the Saints had a tale of two halves on offense. Their opening drive was smooth sailing, capped off by a Keaton Smith 14-yard touchdown run. Sam Raunegger later added a 26-yard scoring run. In between, Fort Bragg’s three scores were courtesy of Alex Nicholson’s runs of 2 yards and 1 yard and his 41-yard touchdown pass to Tager.

Much to MacMillan’s chagrin, however, were too many mistakes — most specifically six fumbles in the first half. Though St. Helena managed to lose only one of those fumbles, MacMillan made it abundantly clear to his team that such mistakes could be much more costly at Middletown next week.

“We have to cut down on the mistakes and own them,” MacMillan said. “That’s the idea of learning how to become a man. That’s the idea of the program, teaching people to understand that none of us are perfect but you try to be perfect, whether it’s as a husband or father. It’s the same thing in the game. You make mistakes, own them. How are you going to fix it? Don’t just say ‘I made a mistake.’ It’s all about what you are going to do next time so you don’t make that mistake.”

St. Helena’s seniors and their parents were honored in a pregame ceremony.

“It’s great for them to finish on this field with a win,” MacMillan said. “This is a special place for all of us. It’s a small town and everyone knows each other. It’s a memory that, when you come back to your high school reunion, you remember it.”

Fort Bragg led 7-3 after one quarter, but the Saints (6-3, 4-2 NCL I) scored 34 unanswered points on the way to thumping the Timberwolves. Quarterback Jhony Covarrubias ran for two touchdowns, covering 2 and 68 yards, and threw for another from 12 yards away to Dean Sommer. Russell Wilms added a 2-yard scoring run.

As a team, the Saints rushed for 178 yards on 18 attempts. Eric Torres was the leading ground-gainer with 72 yards on seven carries. Covarrubias added 71 yards on six carries. Sommer caught two passes for 48 yards. Adam Herdell added two grabs for 35 yards.

The Saints scored twice on defense. Sommer and Wilms returned interceptions for touchdowns that covered 49 and 96 yards, respectively, with the latter coming on the game’s final play. St. Helena yielded just 130 yards on 43 plays. Justin Sanchez recovered a fumble. Torres added a sack. Ben Brakesman, Torres, Herdell and Wilms each had a tackle for lost yardage. Nicholas Groth, Wilms and Covarrubias each had two impact tackles. Matthew Larrabee, Sanchez, Brakesman and Herdell each had one impact tackle.

The North Coast Section has named Maika Watanabe, head coach of the Vintage High School wrestling program, as it 2021-22 Coach of the Year.

Askari Adams, head coach of the Napa High football program the last three seasons and defensive coordinator since 2019, parted ways with the program on Nov. 16 after posting a 5-20 record at the helm.

The American Canyon High boys basketball team defeated El Cerrito on the road Wednesday night by a score of 65-33, one night after surging pas…

Justin-Siena senior Ashlyn Parlett parlayed four years of gymnastics, a year of wrestling and a year of cheer into a full-ride scholarship to the University of Oregon, where she'll be a member of acrobatics and tumbling team.

Football can be all about momentum, especially for a team that’s way behind but scores just before halftime and rides that confidence right ba…

70% of Portugal fans say Ronaldo should be dropped

70% of Portugal fans say Ronaldo should be dropped

St. Helena's Charlie Knight (11), shown congratulating Keaton Smith (14) on his touchdown run against Fort Bragg on Oct. 28, caught a pass for the Saints' only touchdown against Middletown on Friday night.

St. Helena's Clayton Crean (10) gets running room thanks to blocks from Jake Salling (50) and others against Fort Bragg on Friday night.

St. Helena's Sam Raunegger, right, gets past Fort Bragg's Brady Pyorre, on ground, at the end of a 26-yard touchdown run before Tom Woods (15) kicks the extra point for a 14-6 lead.