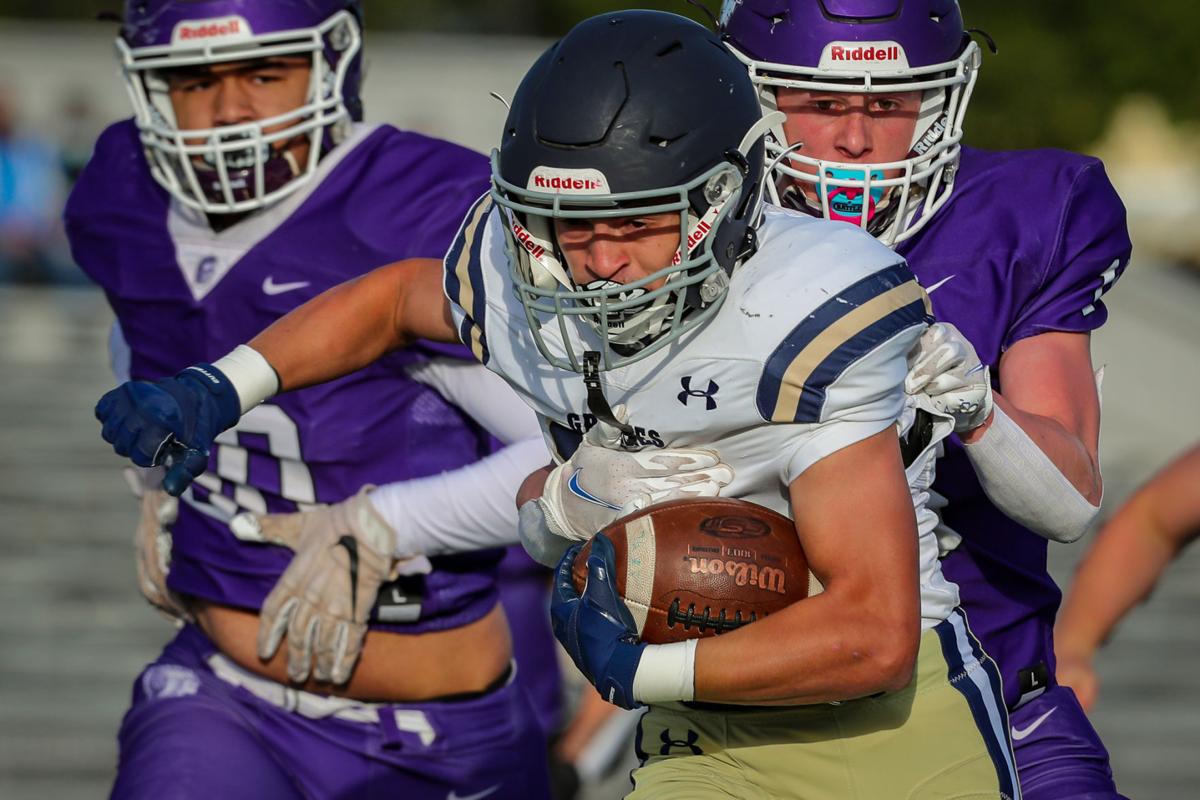 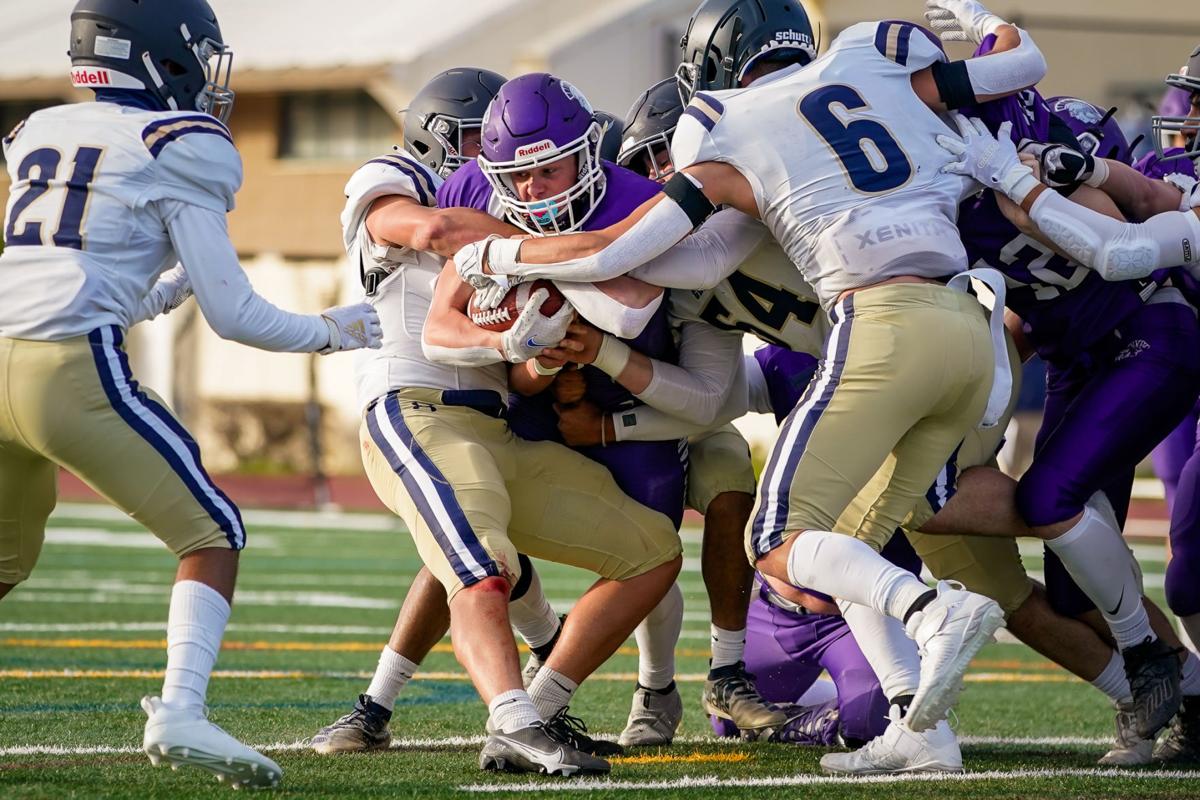 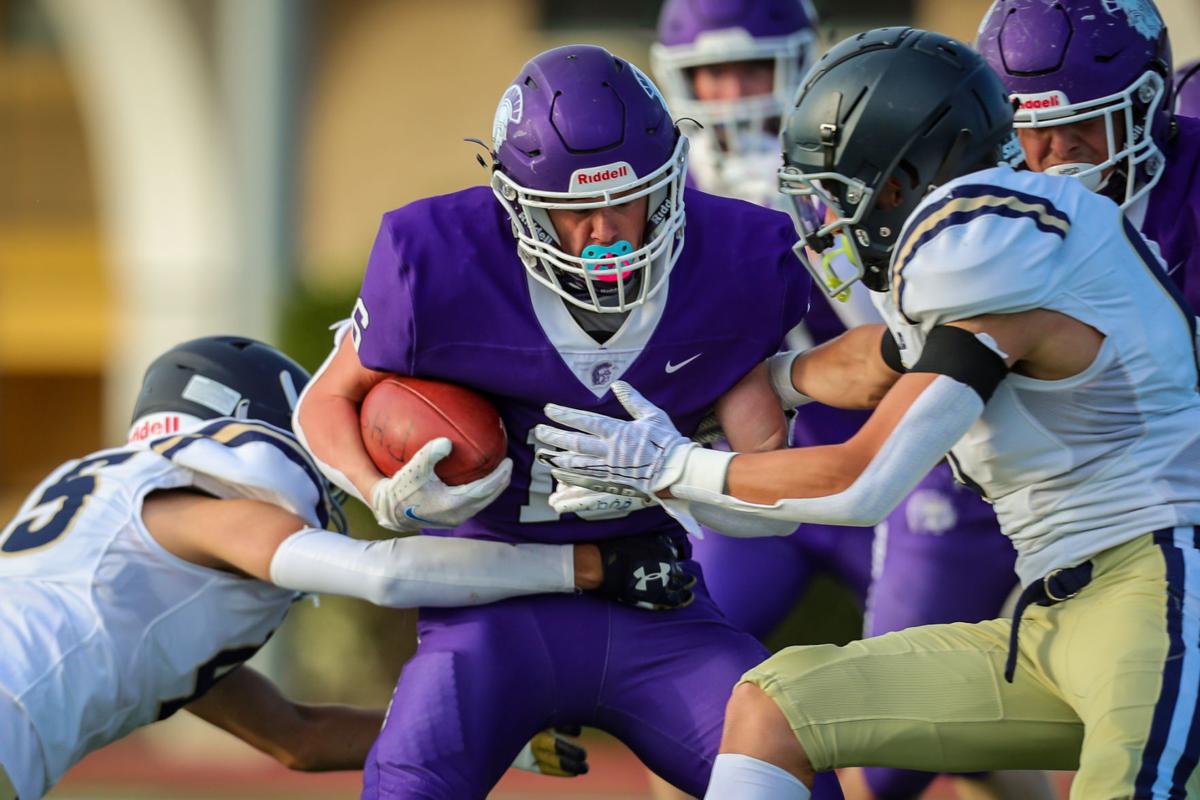 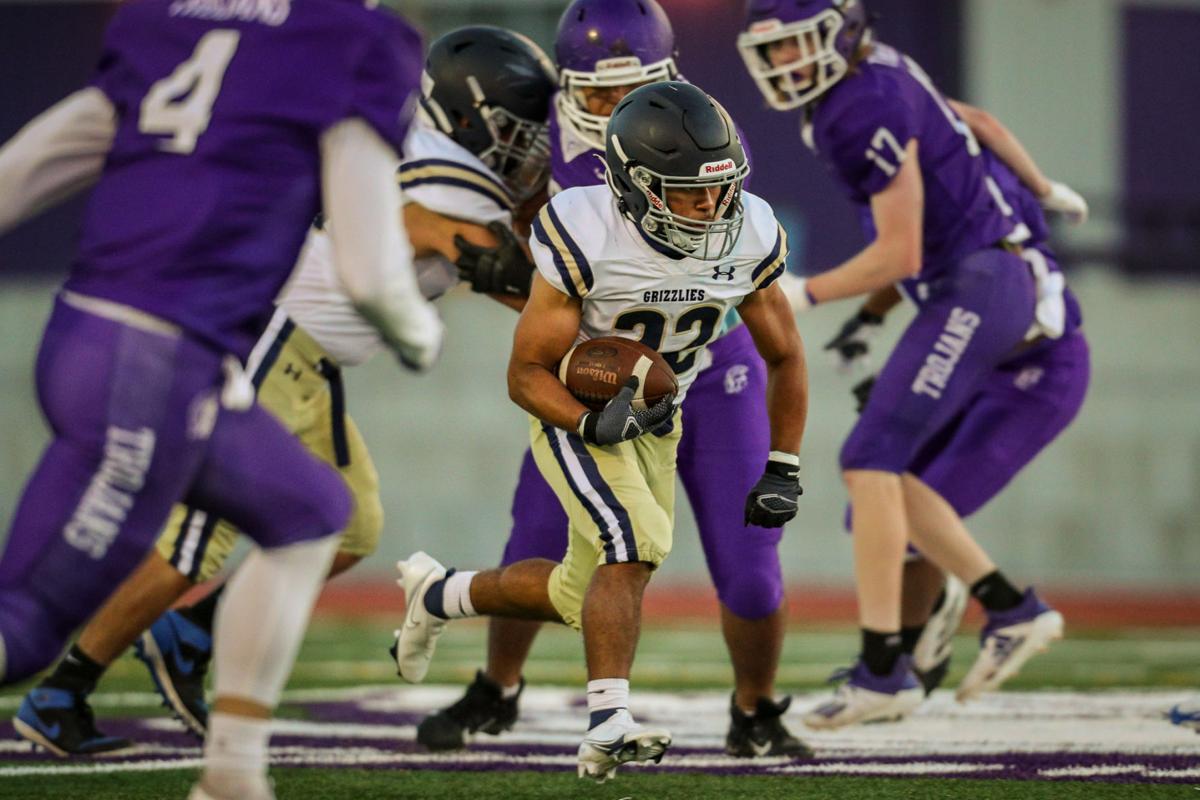 Napa High's Manuel Infante (22) rushes up the middle for a first down at Petaluma High on Friday night. 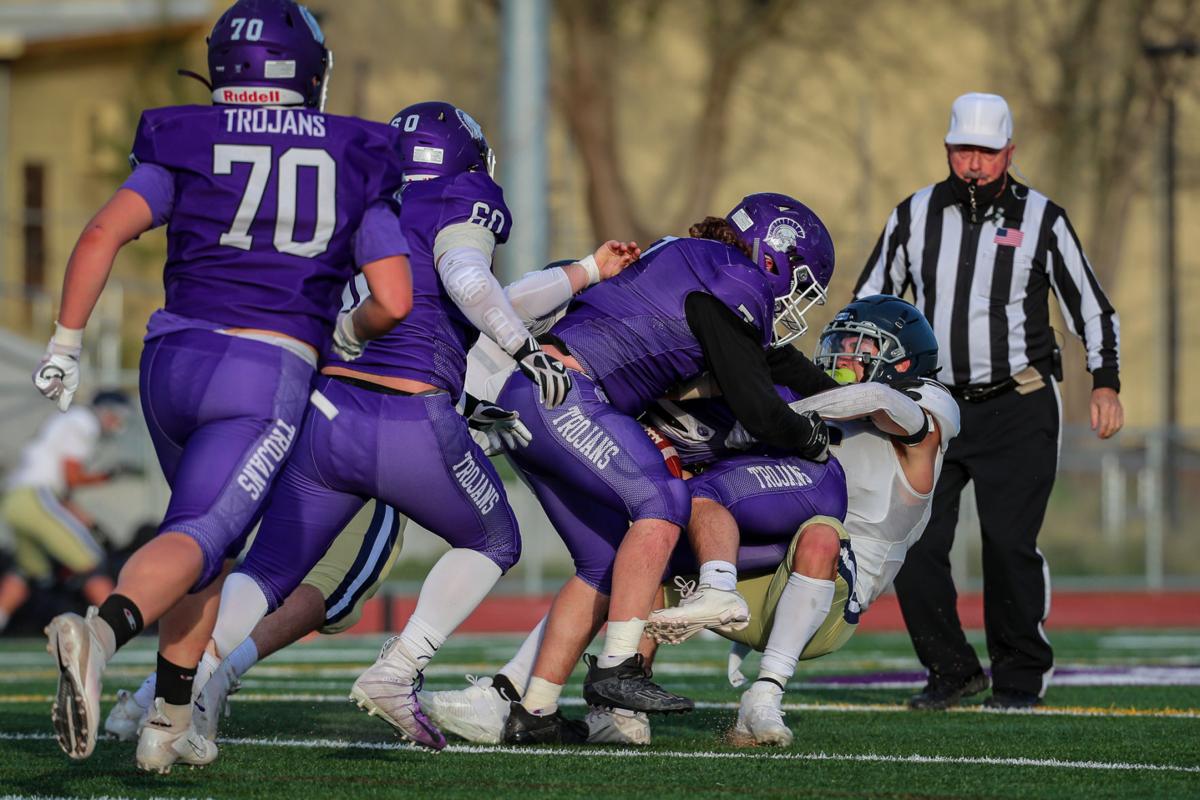 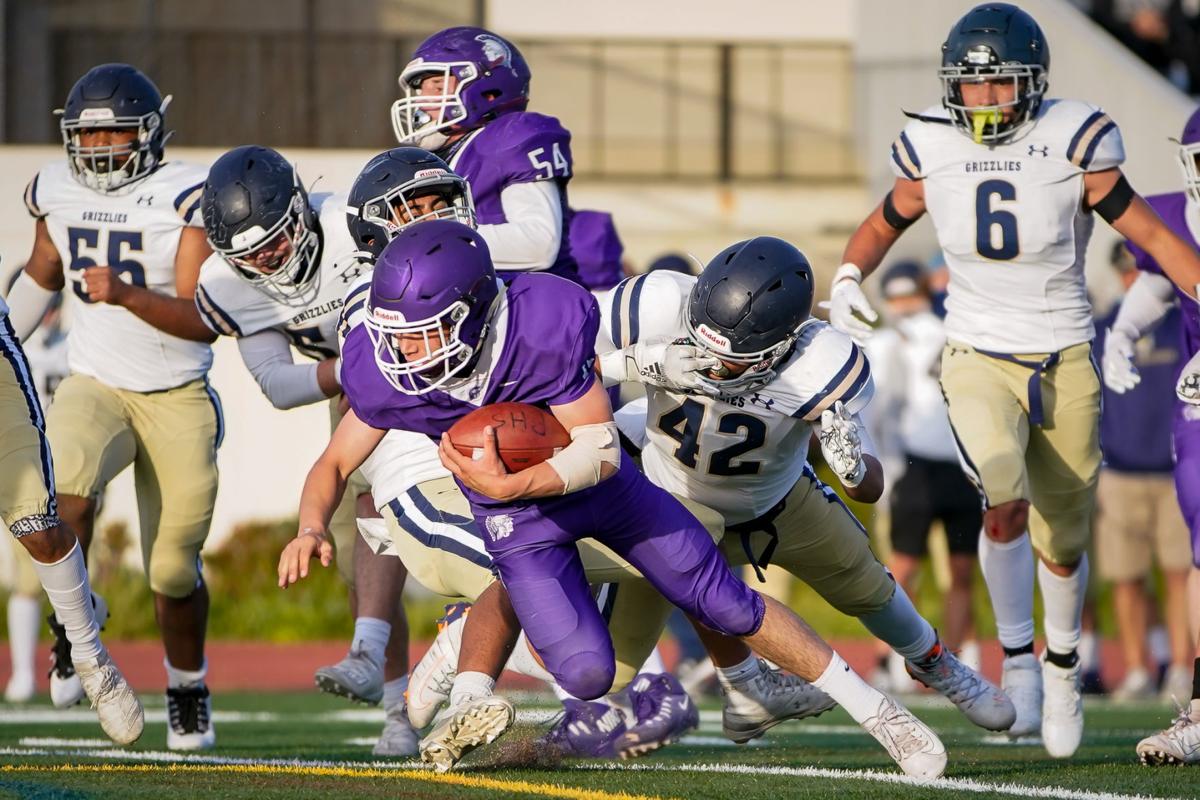 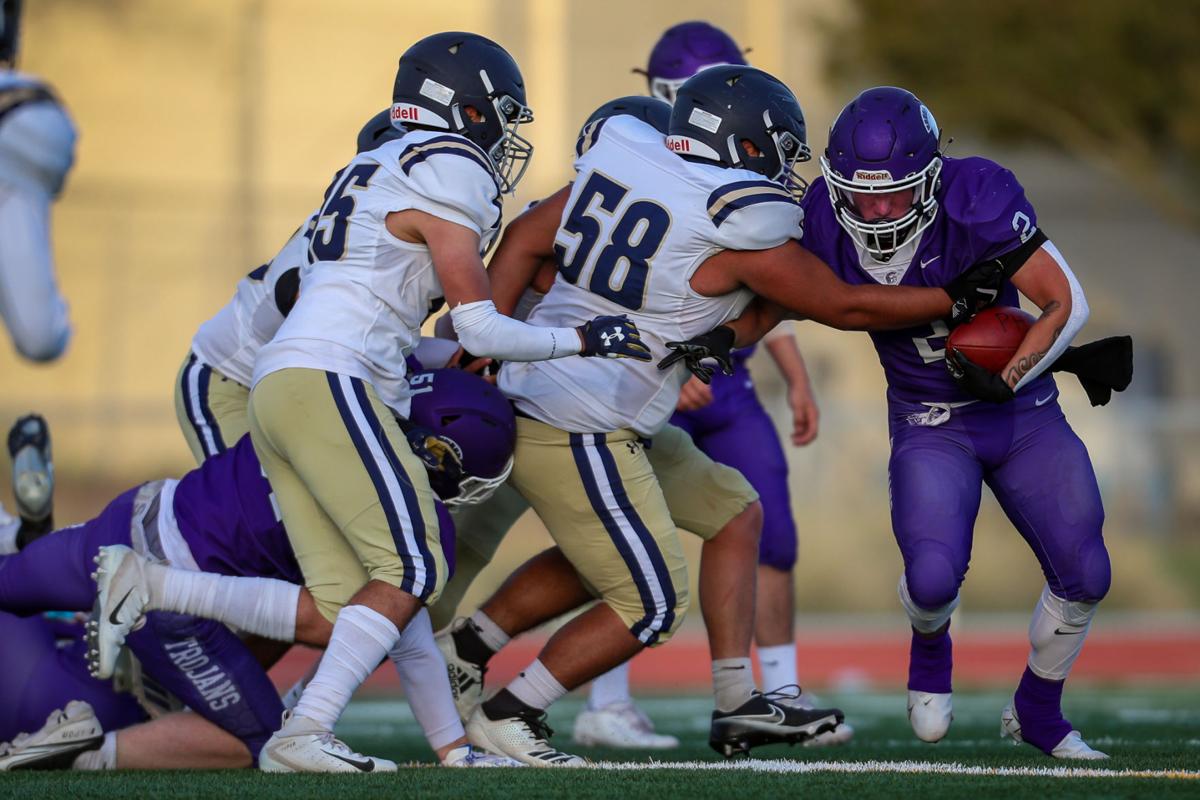 Petaluma High running back Francisco Perez RB (2) is stopped behind the line of scrimmage by Napa High's Berna Leon (58) near the end of the first half Friday night. 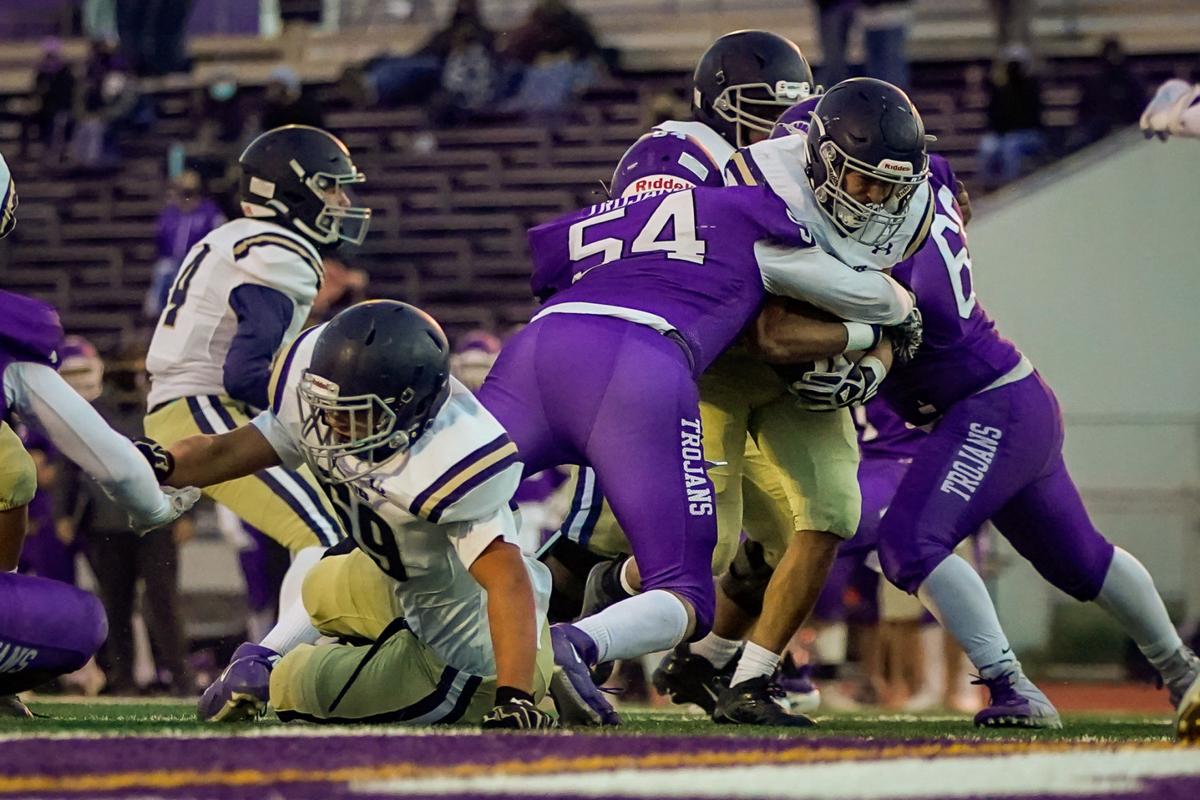 Napa High's Benito Saldivar rushes up the middle for a touchdown Friday night at Petaluma High. 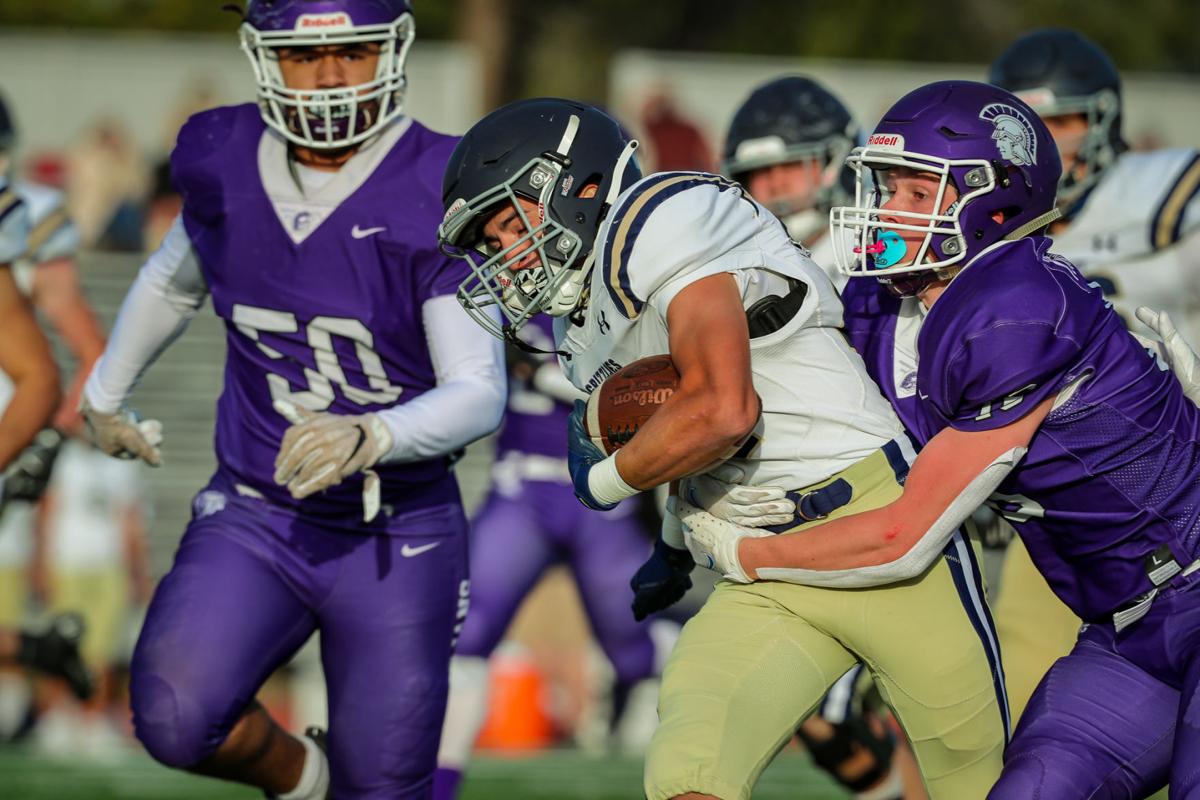 PETALUMA — With 6:51 remaining in the fourth quarter, Napa High running back Benito Saldivar punched in his second score of the night to put the Grizzlies up by two touchdowns against a Petaluma High side that hadn’t scored a single point all season.

It appeared Napa, which didn’t score until the fourth, would hold on for a hard-fought victory behind its workhorse running back. But the hosts had different plans.

In a game played on a chilly and wild night on the west side of Petaluma that showcased a little bit of everything, Petaluma used a spur-of-the-moment play and roared back for a 14-13 victory.

“Hey, Petaluma came out and had more energy than we did and had a good game plan,” Napa head coach Askari Adams said. “We did not come out and play Napa Football. When you have a team down and have opportunities to put your foot on the gas and you don’t do that and let them hang around — they caught that wave and just kept on going.”

The Trojans were banged up at the quarterback position. Senior starter Jack Hartman heavily dislocated his thumb against Vintage two weeks ago and his sophomore backup broke his hand in practice this week. With Hartman’s injured hand wrapped up, forcing him to play mostly defense, Petaluma called up Eli Galaudet-Freeman from the junior varsity to make his first-ever varsity appearance.

But the Trojans turned to their senior leader to attempt their comeback in the final frame.

To say Petaluma (1-2) is a running first team would be an understatement. Its triple-option offense had completed only two passes for 13 yards heading into the final seven minutes. Down by two scores, they decided to send Hartman back under center. He had already made his presence known on defense, with an interception of Napa starting quarterback Mal Turner in the second quarter.

The Petaluma offense came alive in the fourth quarter, as Hartman and CJ Powers traded 10-plus-yard gains back and forth. In just over two minutes, the Trojans found the back of the end zone on a 4-yard carry by Powers. The junior running back went toe-to-toe with Saldivar, each tallying more than 150 rushing yards for the night.

Napa (1-2) looked to bleed out the clock and avoid the upset, but its follow-up drive quickly turned into a three-and-out after a couple of short runs and an overthrown pass.

The Grizzlies were still in great position to hold off the Hartman-led offense on the following drive, after Jose Padilla sacked Hartman deep in the backfield, but Petaluma head coach Rich Krist drew up the perfect play for the moment.

In a throwback to 1972, or maybe the 2007 Fiesta Bowl, Hartman found senior Tanner Starrett near the right sideline. As the wide receiver was about to be tackled, he flipped the ball to Powers. Running in full stride, Powers took the hook and ladder play 35 yards. Ten more yards were tacked after a late hit by a Napa safety.

“They were playing off of the line of scrimmage and I just, I made it up in the huddle,” Krist said. “We’ve never practiced it. We got in and I had the right kids to run it. Our receiver did a great job of timing the play, he caught the ball, and really waited to draw people to them and to allow CJ to get to the outside of him. He waited until a corner came up and he just, he couldn’t have done it better. If we were to have practiced it, it would have never worked that well.”

The Trojans found themselves at the 10-yard line, but it wasn’t a foregone conclusion. Red-zone scores had been hard to accomplish all evening, as both defenses held strong deep in their own territory. In fact, each side opened the game by stopping the other team inside of the 10-yard line on fourth down.

But Powers continued to find sneaky yardage against the Grizzlies and grinded his way to the 3-yard line. The Napa defense had stopped fullback Mario Zarco for most of the game, but the junior had his best run when it counted. Zarco grabbed three of his six total yards going through the heart of the Petaluma line and crossed the goal line with 28.7 seconds remaining.

Mackenzie Soper lined up for the go-ahead kick. The junior had missed her earlier attempt at a 21-yard field goal, as high winds were a nightmare to kick into at Ellison Field. But the place kicker blasted a picture-perfect extra point for the go-ahead score.

“She has been biting at the bit to get out there, to get a chance, and I am so proud,” Krist said. “I am so happy for her. I mean she nailed that thing right down the middle. So proud of her.”

Napa attempted a last-ditch attempt to regain the lead, but a deep throw by Turner was intercepted for the third time overall and second time by Powers.

Even in defeat, Saldivar continued to be a massive bright spot for Napa this season. The running back had a game- and season-high 194 yards on 24 carries, including both scores.

“He has been a bright spot on offense and he has been running the ball hard,” Adams said. “The O-line is getting better and they opened up holes for him last week and this week.”

Napa will play its first home game of the season next Friday against a Casa Grande side that held on to defeat American Canyon 49-46.

Napa High's Manuel Infante (22) rushes up the middle for a first down at Petaluma High on Friday night.

Petaluma High running back Francisco Perez RB (2) is stopped behind the line of scrimmage by Napa High's Berna Leon (58) near the end of the first half Friday night.

Napa High's Benito Saldivar rushes up the middle for a touchdown Friday night at Petaluma High.