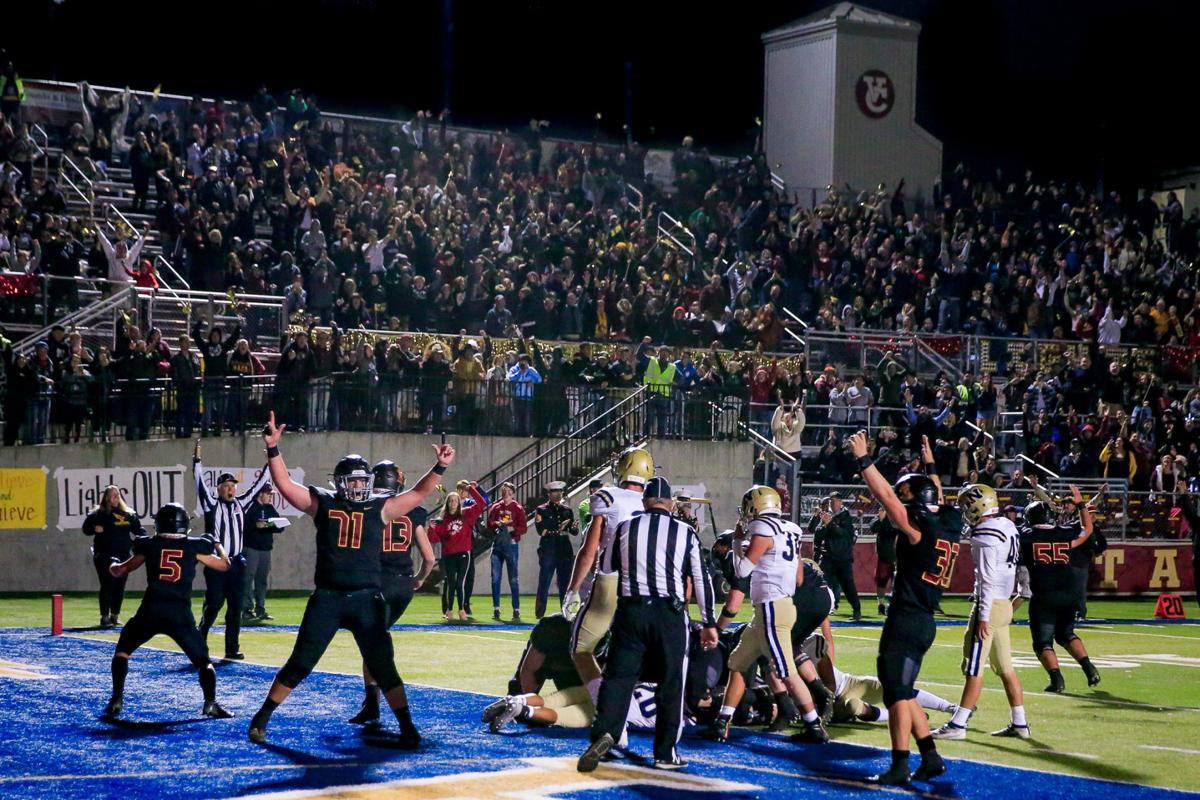 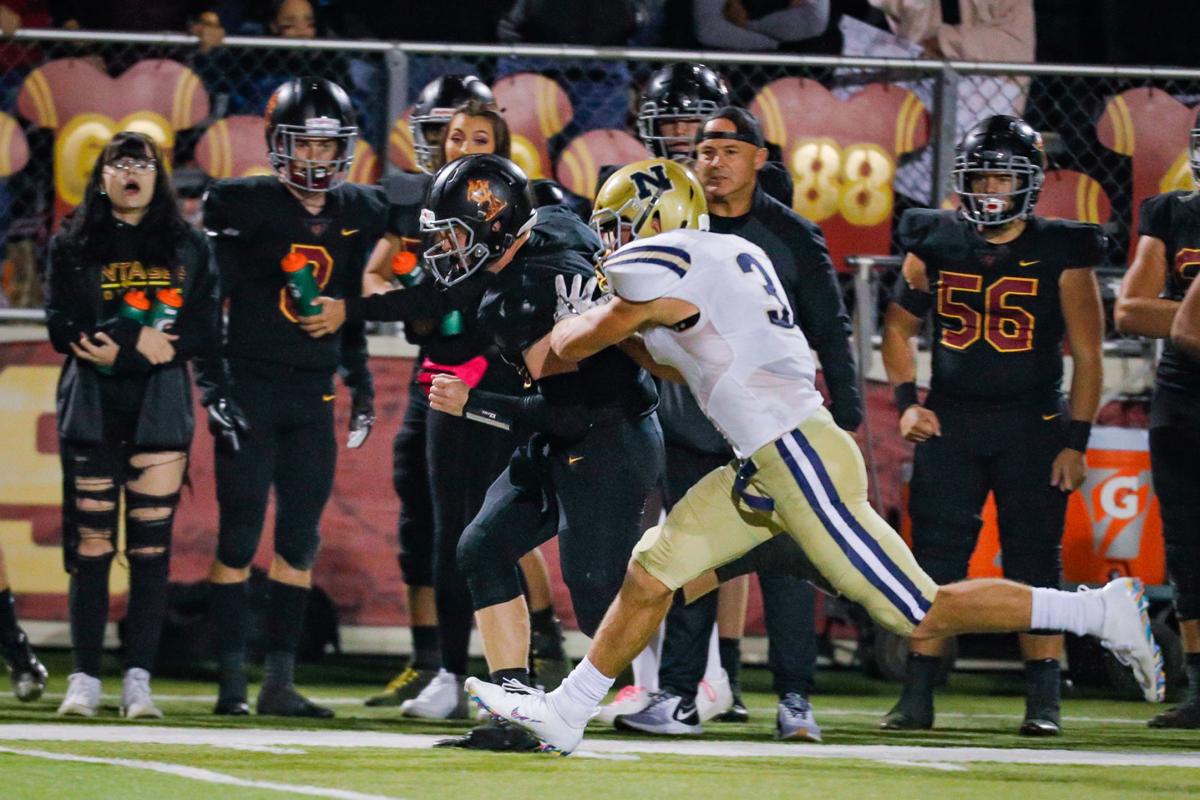 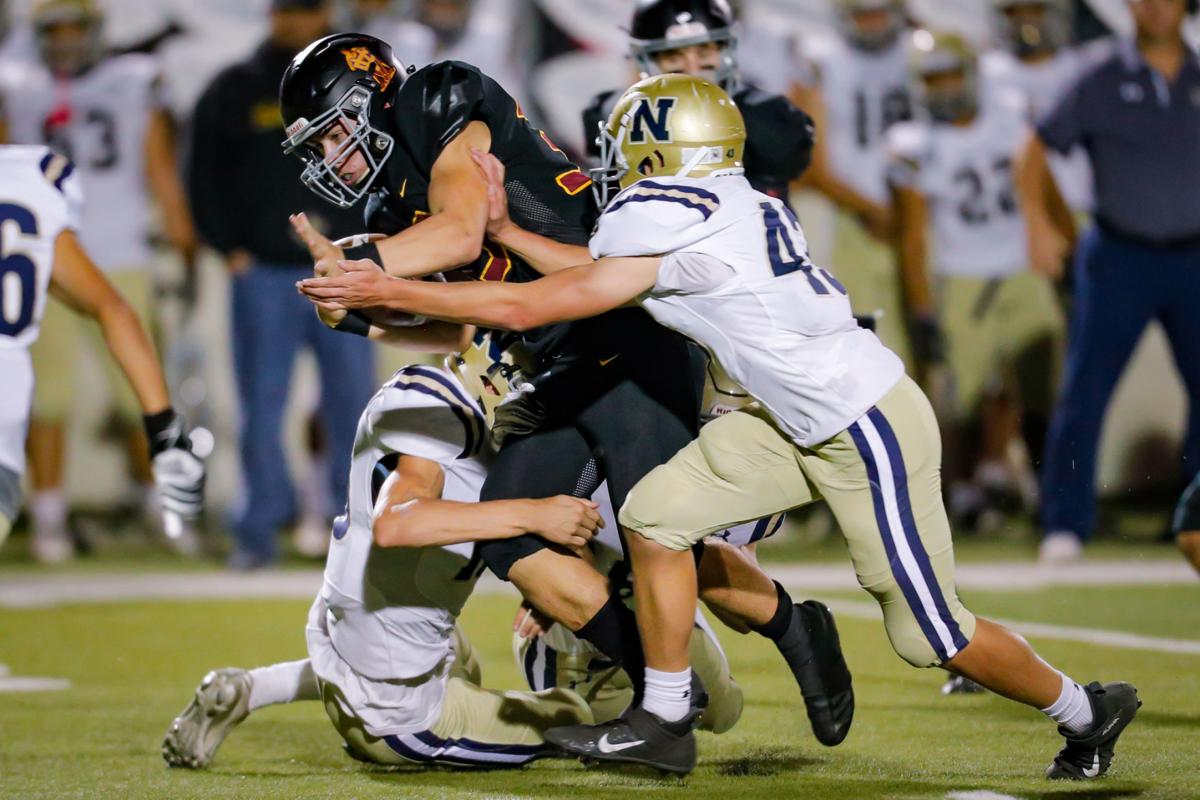 Vintage's Dylan Smith is brought down by Napa High's Kyle Jezycki, left, and Andrew Daniel during this season Big Game XLVIII at Memorial Stadium. Both Vintage and Napa are heading to the North Coast Section playoffs, along with Justin-Siena, American Canyon, St. Helena and Calistoga. 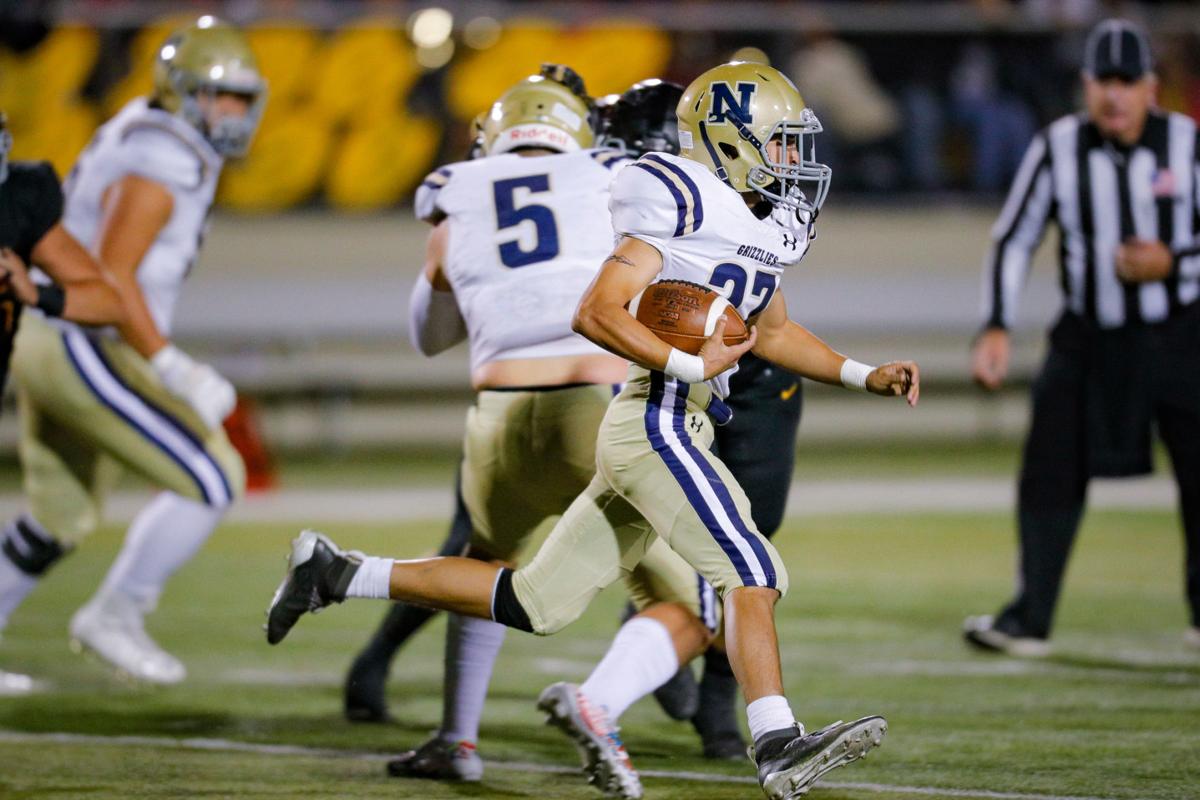 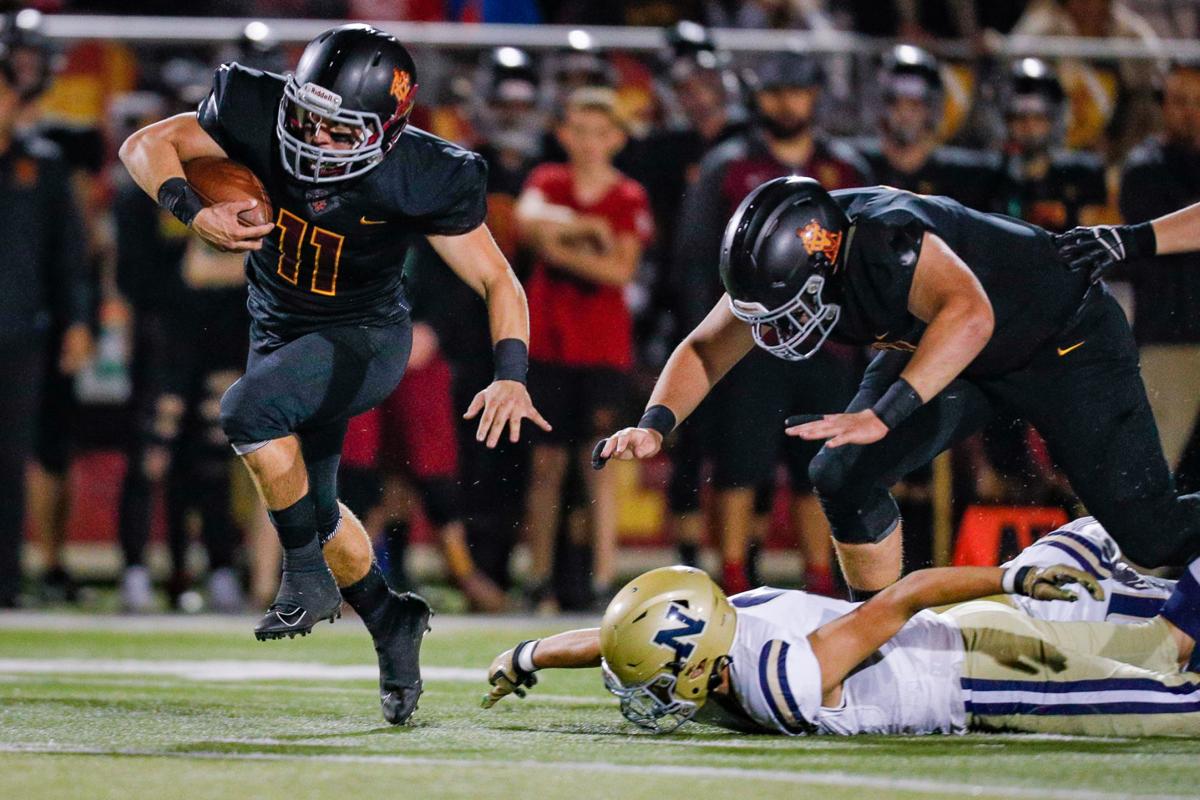 It wasn’t a Big Game for the record books, but definitely one for the storybooks.

The Vintage High football team crushed Napa High’s hopes of a miraculous comeback win with a 10-play, 64-yard scoring drive that lasted less than two minutes, as quarterback Jacob Aaron bulled across the goal line from 4 yards out with 23 seconds left to secure a 26-20 victory in Big Game XLVIII at a chock-full Memorial Stadium on Friday night.

It was a far cry from Vintage’s 69-14 Big Game victory last season.

“Every year’s a new year, and we knew they were a good team,” Aaron said. “I’m so proud of our team for pulling through.”

Vintage (9-1) finished 6-0 in the Vine Valley Athletic League for the second year in a row, and should get another home opener when the North Coast Section Division 1 playoffs start Nov. 15. They will find out their opponent next weekend.

“We have a will about us, a heart about us. We play a game called ‘follow the leader’ and I’m that guy and I’m not going to panic,” Crushers head coach Dylan Leach said. “I’m going to put us in positions that we can go down and score and the kids believe that.”

Aaron was named the game’s Great American Rivalry Series MVP and Napa Valley Register Vintage MVP. Along with playing safety on defense, the junior finished with a team-high 97 yards on nine carries. He was just 3 of 9 passing for 36 yards, but his 21-yard scoring strike to Sam Neal capped a 12-play, 80-yard drive just before halftime, with Tate Salese nailing the PAT to make it 19-7.

“Jacob is gritty,” Leach said. “He’s a competitor and he just does everything we ask him to do. Hopefully he can do that for us in the playoffs.”

It was the first time in 15 years the crosstown rivals met with a league title on the line, and the Grizzlies (7-3, 4-2 VVAL) did their best to share the title with the Crushers.

Senior quarterback Isaiah Newton capped an eight-play, 61-yard drive with a twisting, 5-yard scoring run with 58 seconds left in the third quarter. The march was set up by Jesus Pimentel’s recovery of a Vintage fumble, the only turnover of the game, and Erik Vargas threaded his second extra point to make it 19-14.

Newton, the Register’s Napa High Big Game MVP, said he had to pick up his teammates at halftime.

“A lot of the team was looking real down, like they weren’t ready,” he said. “I just wanted to lift everybody’s spirits up, and that’s how we came out in the second half.”

Said Napa head coach Richie Wessman, “We really didn’t have to change a whole lot at halftime. We just had to not play timid. When we started playing the Grizzly football we’d been playing all season, the game turned around pretty quick for us.”

With the Grizzlies’ platooning system of having only two players on double duty, they seemed to be wearing down the Crushers like they had so many other teams this season.

Vintage was forced to punt seven plays into its ensuing possession, and Napa came back with yet another scoring drive – against a Crusher defense that was giving up just 10 points a game. This one covered a whopping 94 yards in 16 plays, with five first downs.

Newton, who finished with a team-high 84 rushing yards on 16 carries, made a nice fake to rumble 22 yards to the 50-yard line. Later, after getting sacked for the third time of the night, he bounced back with a 19-yard tiptoe down the Vintage sideline to the 20. Finally, he scored with another nice fake from 6 yards out for a 20-19 lead with just 2:17 left.

“Isaiah’s a great quarterback,” he said. “I respect Isaiah a lot. He’s going to go play in college somewhere.”

The Grizzlies tried to make it a three-point game with a two-point conversion run, but Trey Dennis came up a yard short.

But Vintage, despite trailing for the first time in six games, went back to work at its own 36. A defensive pass interference penalty on the first play put the Crushers at the Napa 49. From there, two carries apiece from Aaron, Mauricio Castro and Dylan Smith got them in the end zone.

“We always talk about not panicking,” Leach said. “I’m not going to panic and the staff doesn’t panic, and we don’t get too high or too low throughout games. Obviously that was a low point when they took the lead, but we didn’t change our offense. We just lined up in the same things all night long and ran the same exact plays with two minutes to go and we ended up scoring.”

Napa tried to respond after getting the ball at its own 25. On the last play, Newton completed an 11-yard pass to Brock Bowers, who pitched it back to him. As Newton doubled back the other way and found running room, the referees ruled that Bowers had been down.

A river of Vintage fans poured onto the field from the north end zone in celebration.

“Our defense did good, but Vintage’s played better,” Newton said. “Their linemen went down in the hole. They were just playing tough. They wanted it. If we’d come out in the first half like we did in the second, I believe the game would have had a different outcome, but you can’t start off slow in a Big Game like this.”

Both teams punted on their first series, before Castro put Vintage on the board with a 36-yard scoring scamper through a huge hole in the right side of the line. The extra point was side, keeping it 6-0 with 4:31 left in the first quarter. After Napa punted again, despite an 11-yard catch by Logan Van Zandt, Aaron used a nice fake to break off an 83-yard touchdown run down the Napa sideline – his longest of the season.

Smith lined up against the highly recruited Bowers and held him to four catches for 37 yards four carries for 17. The sophomore said the Crushers brought up freshman speedster Mo Schaumkel from the JV team to simulate Bowers on scout offense in practice.

“He’s hard to deal with, for sure, so we practiced for Brock all week long,” Smith said, adding that strength and conditioning coach Chris Yepson helped his team keep up with the platooning Grizzlies. “Coach Yepson does a great job. We were ready for this game.”

Added Aaron of Smith, “He’s an animal. I can’t wait to see him these next couple of years. He’s going to be an absolute beast. I’m really proud of him.”

“For a sophomore giving up 40 pounds and 6 or 7 inches, I thought he played very well,” the coach said. “And I thought our other sophomores, (linemen) Louie Canepa and Preston Gullum, played very well and we’re excited about that.”

Wessman said Vintage didn’t give Bowers a chance to get a head of steam.

“They tackled really well,” he said. “You’ve got to give them credit for that.”

“I’m proud of our kids. They fought hard, they did an incredible job,” he said. “They’ve grown all season and gotten better and better. They were 0-10 last year and now we’re 7-3, and if you change one play in three games we’re 10-0. It’s an incredible thing that these young men are developing and growing into.”

Leach was happy with the win, but looks forward to another two straight weeks of practice.

“The turnovers in the second half were turnovers that we caused ourselves, so that’s gotta get fixed or we’re going to lose games like this,” he said. “We’ll just get back to fundamentals and try to learn how to be better football players.”

The Crushers led 28-0 at halftime after touchdown runs by Noah Tanpoco (2 yards), quarterback Justin Ray (25 yards), Jaycob Gualberto (63 yards) and Mo Schaumkel (2 yards). In the second half, Ray added scoring keepers from 14 and 26 yards out, and Riley Anderson added a 25-yard TD run.

Aaron Ballines and Landon Leal combined to kick four extra points. Schaumkel also had the only takeaway by either team, an interception he returned 75 yards to set up the final score.

Napa nixed the shutout bid when Jack O’Donnell tackled Ray in the end zone for a safety.

After year after Vintage had an undefeated season blemished by a 14-14 tie against Napa, the Crushers finished 9-1 with a 43-12 loss on Sept. 6 to an Acalanes squad that finished 9-0.

“We learned a lot from that loss as a team, as a coaching staff, and everything from then on just clicked,” Vintage head coach Kyle Schuh said. “Looking back, we would definitely do things differently, but they were ahead of where we were. I hope (we play Acalanes again). It’s a great matchup, both varsity and JV.”

The Big Game Car Raffle did more than raise $165,000 for the Napa High and Vintage High athletic programs.

Brock Bowers has been named 2019 All-Napa County Football Player of the Year.

Vintage's Dylan Smith is brought down by Napa High's Kyle Jezycki, left, and Andrew Daniel during this season Big Game XLVIII at Memorial Stadium. Both Vintage and Napa are heading to the North Coast Section playoffs, along with Justin-Siena, American Canyon, St. Helena and Calistoga.