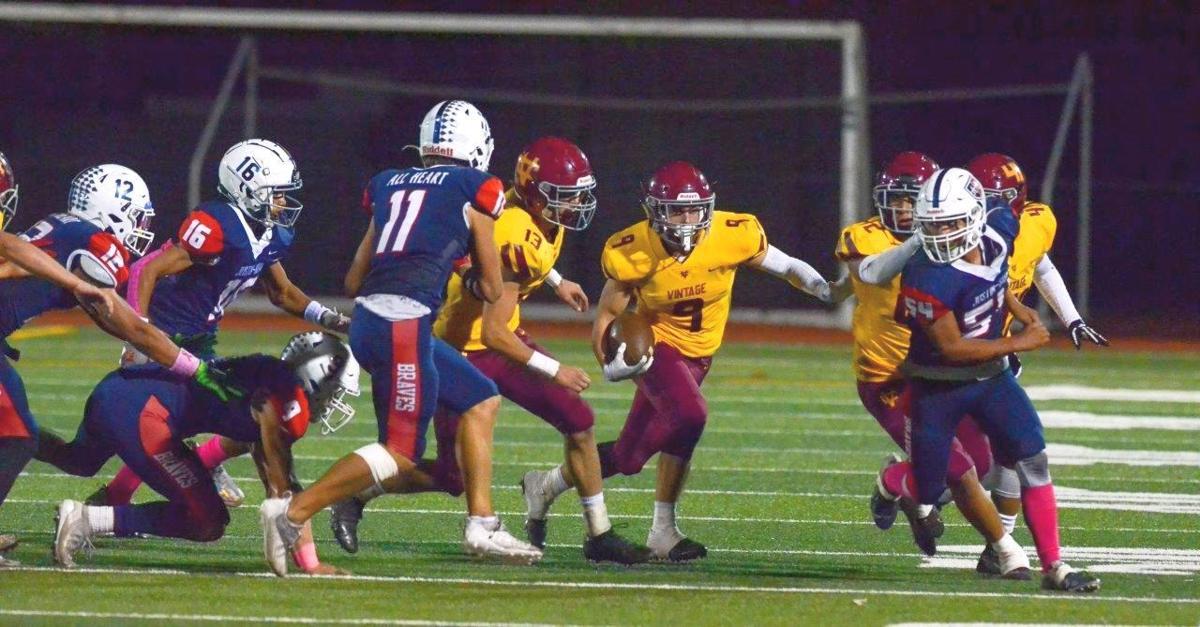 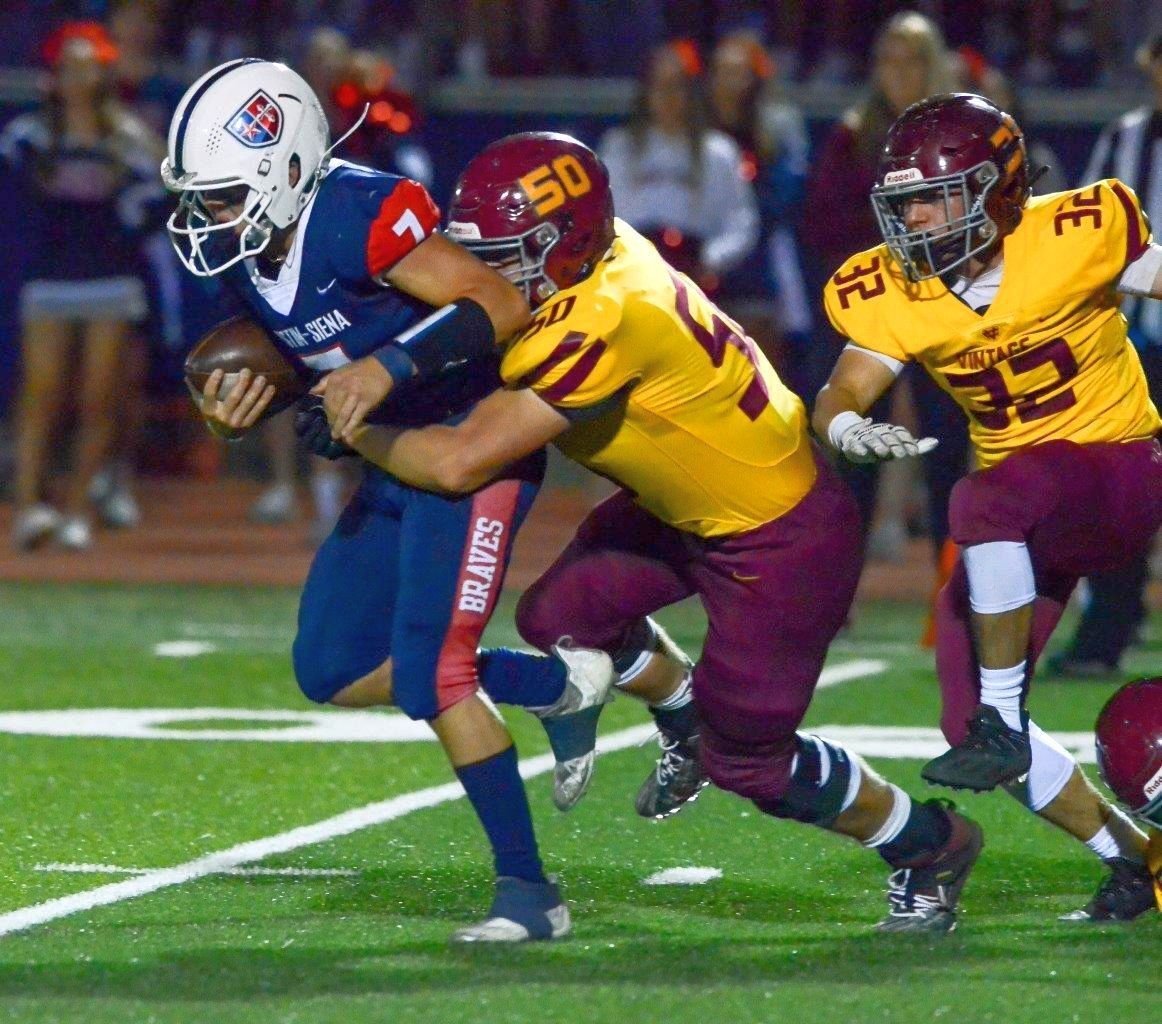 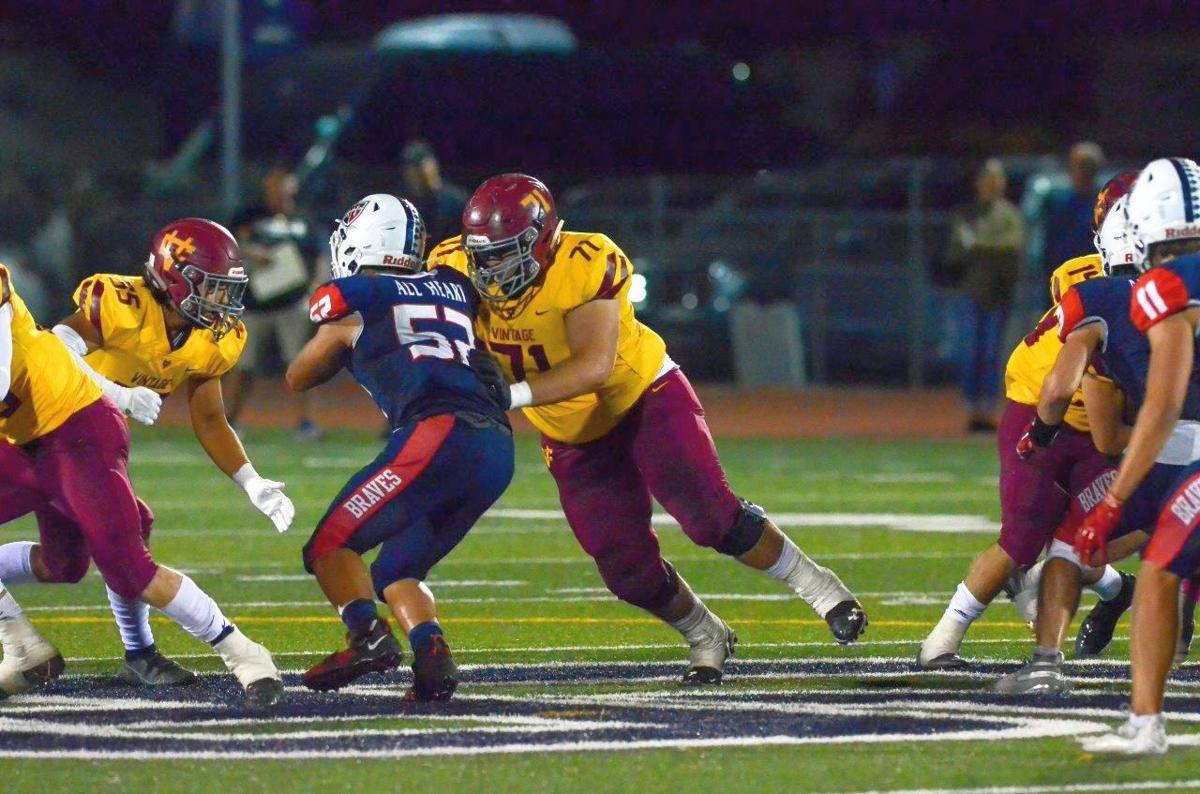 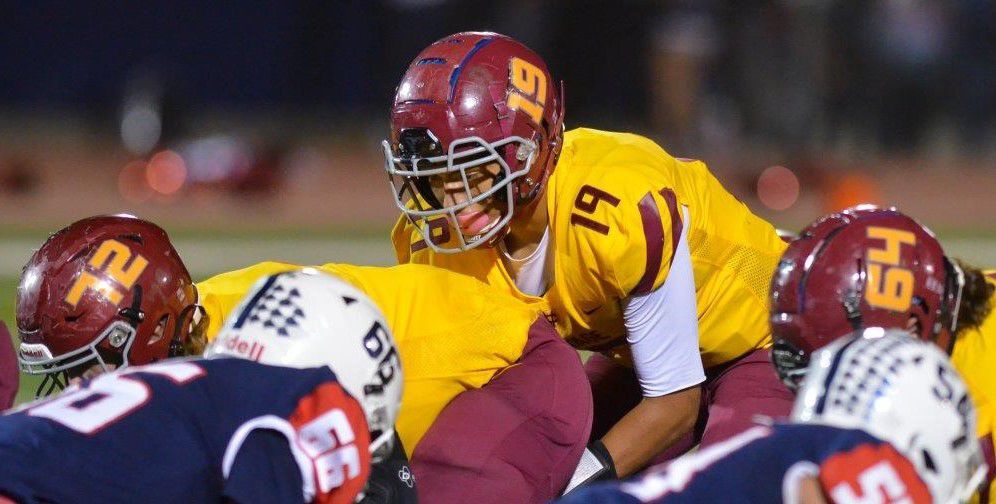 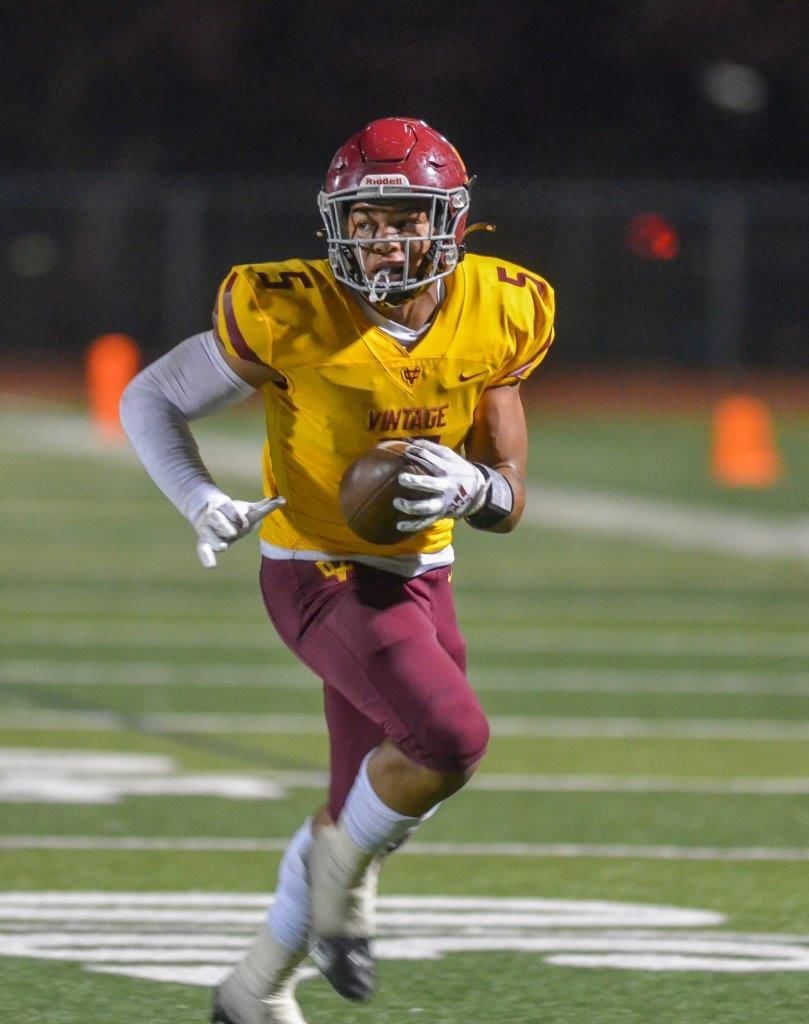 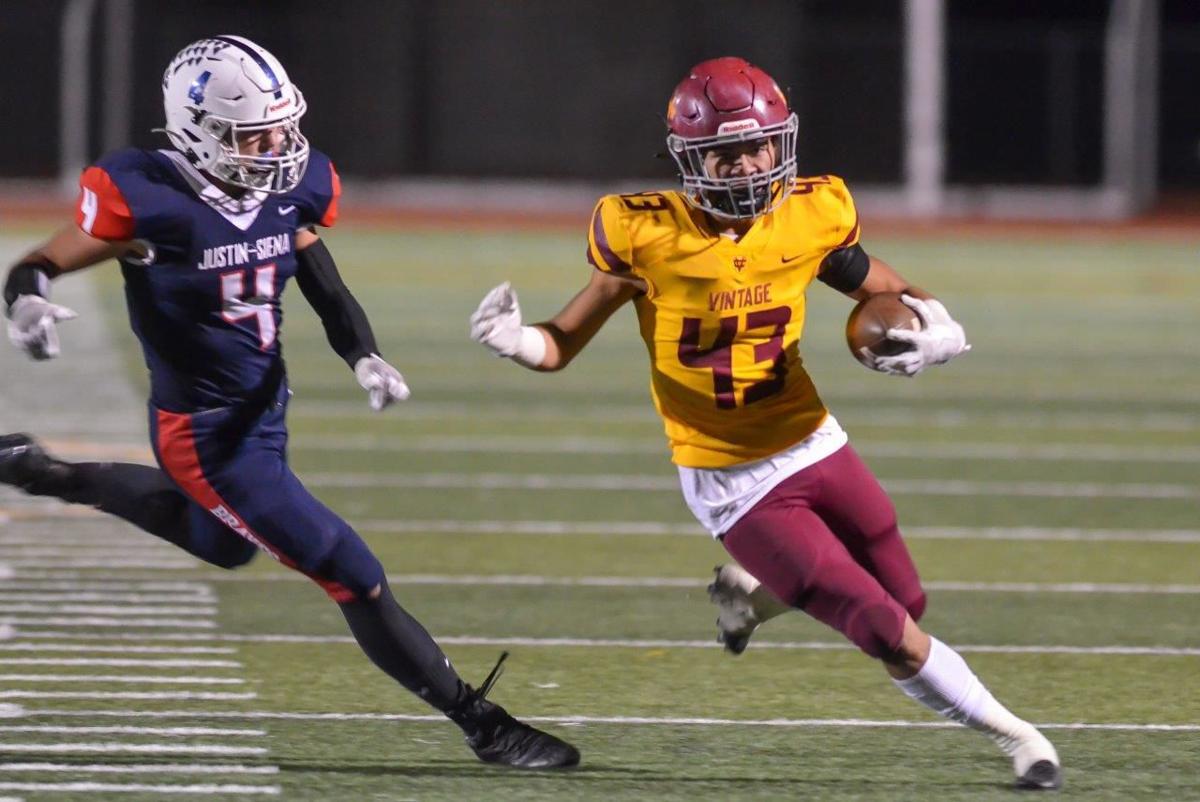 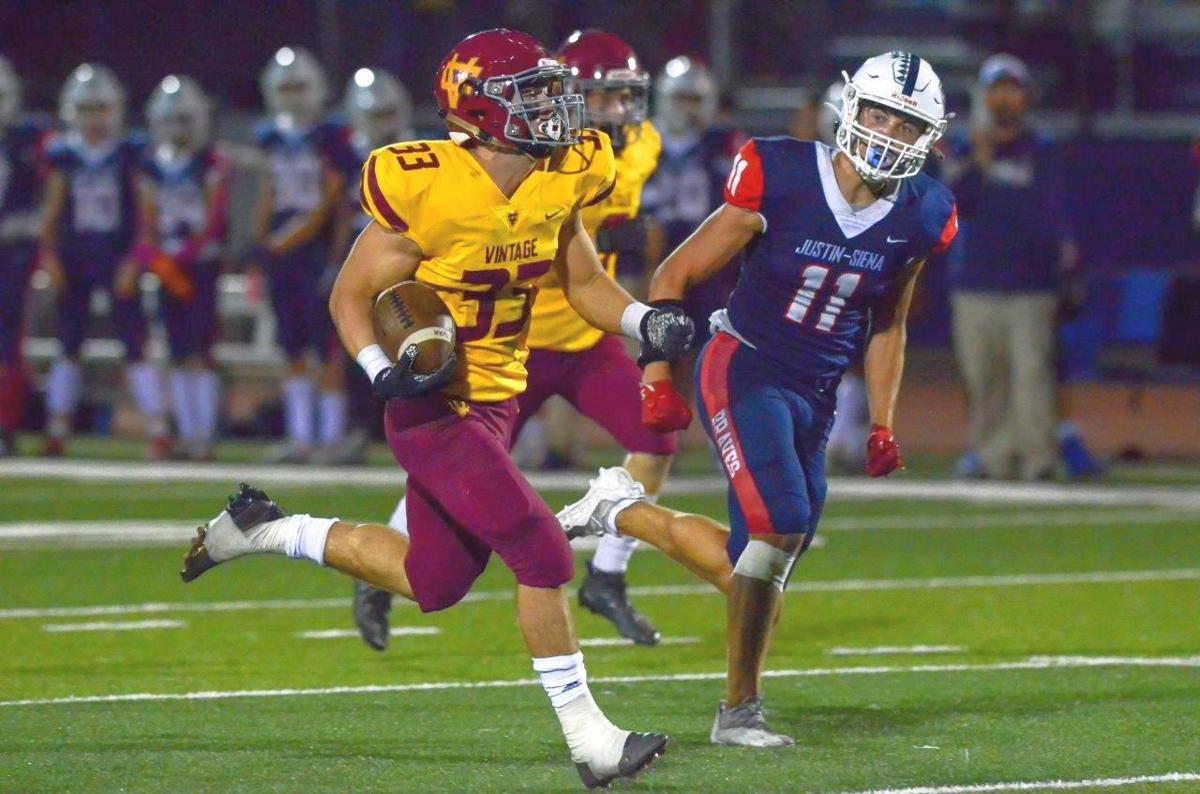 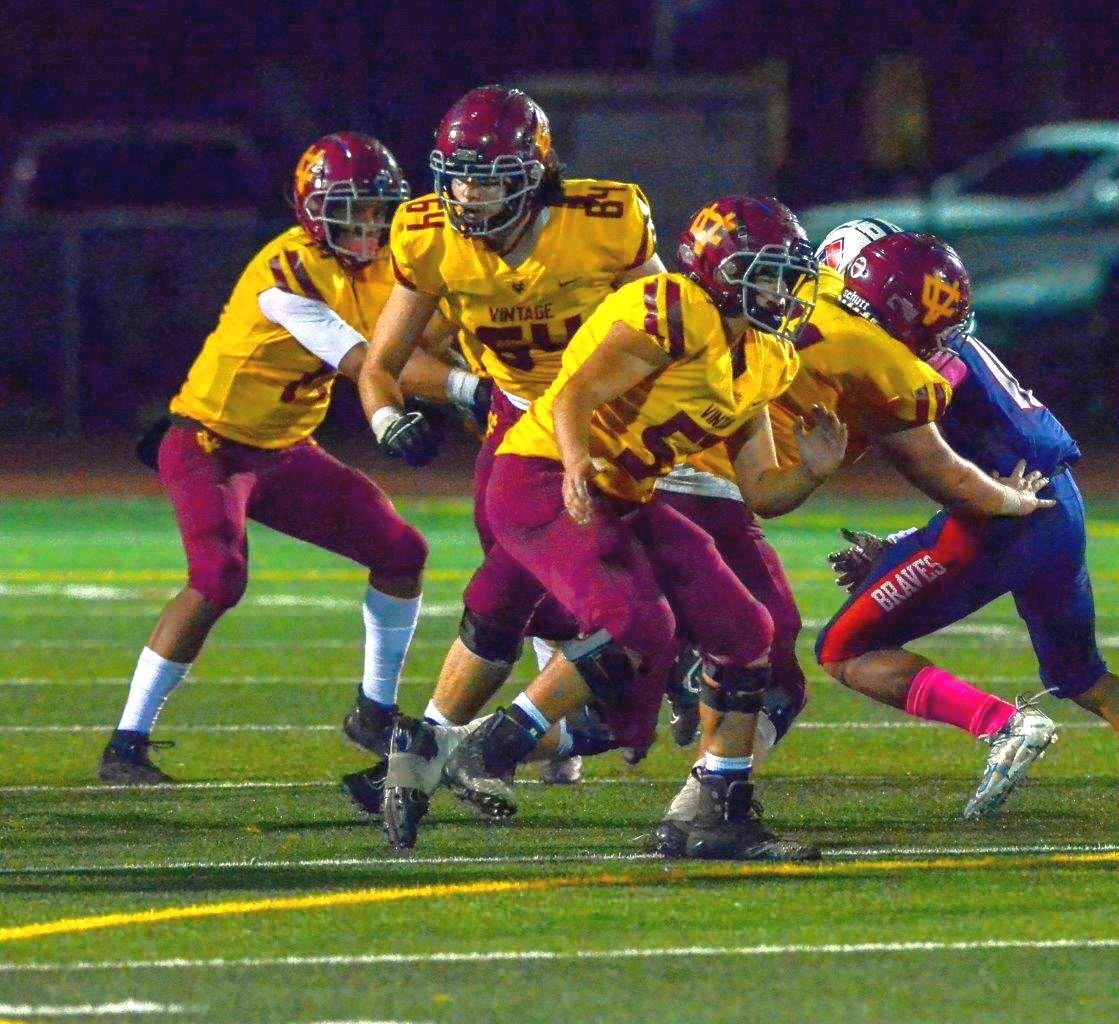 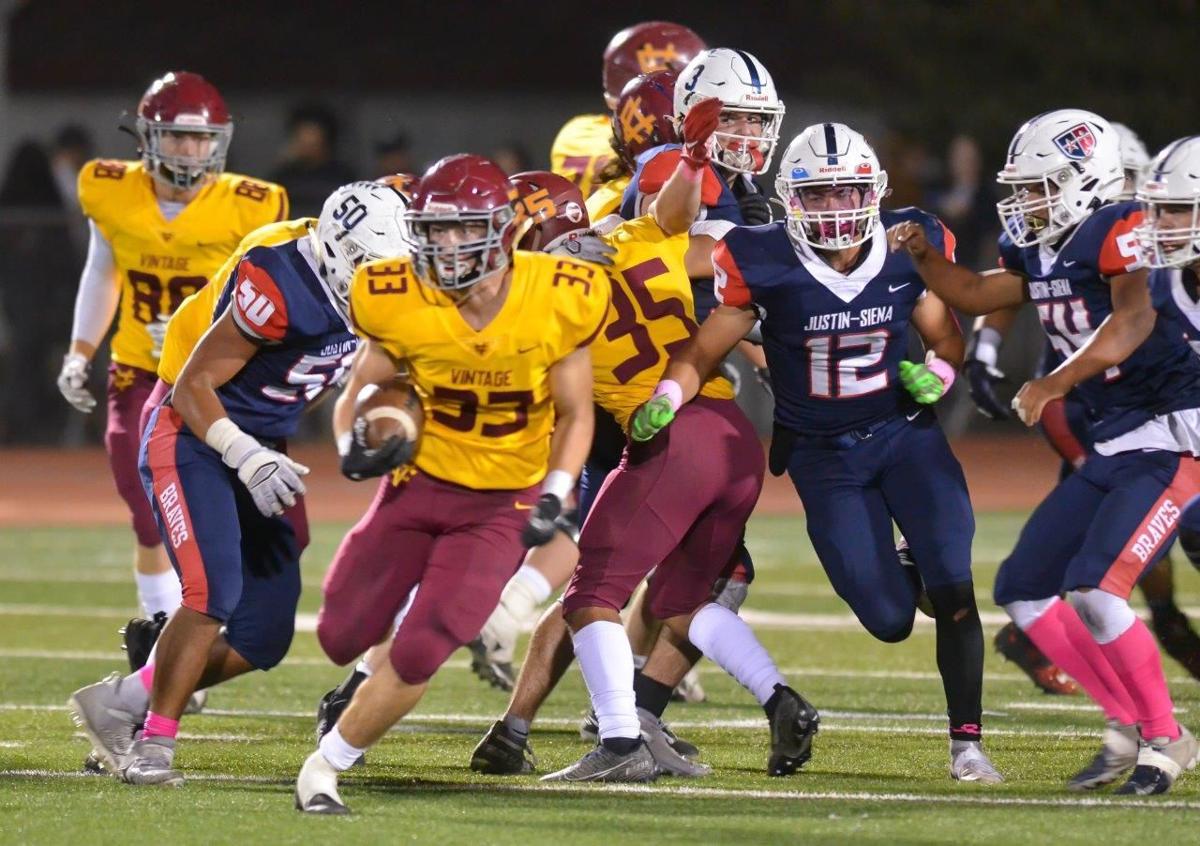 That was the case Friday night when visiting Vintage rolled past Justin-Siena in a Vine Valley Athletic League game, 40-7, to continue its quest to make the playoffs.

“It’s a really dynamic backfield that we’ve built and when everyone’s healthy, I feel like we’re a force to be reckoned with,” Crushers running back Dylan Smith said after scoring three touchdowns.

The game was scoreless at Dodd Stadium until Smith found the end zone from a yard out for Vintage (4-3, 3-1 VVAL) with 2:09 left in the first quarter.

“Two personal fouls, I mean — that’s it, plain and simple,” Crushers head coach Dylan Leach said of why it took so long for the Crushers to get on the board. “We drove down. I don't think they stopped us really. We stopped ourselves with the two personal fouls.”

Smith’s second score came from 5 yards away with 1:04 left in the third quarter. Lastly, he found the end zone from 48 yards out with 9:20 left in the game. He finished with 170 yards rushing on just 13 carries.

Diego Davis had two touchdown runs for the Crushers, both in the second quarter. The senior found the end zone from 9 yards away with 9:43 left before breaking off a 33-yard scoring run with 1:45 remaining. Davis ended the night with 93 yards on nine carries.

The last part of the three-headed monster for the Crushers was senior Mo Schaumkel, who has been battling injuries but ran four times for 19 yards.

Performing well in his first varsity start at quarterback was Elias Alvarez. The junior ran nine times for 69 yards and also scored a touchdown.

“His thing is all about confidence,” Leach said of Alvarez, the nephew of 2017 Vintage High Athletic Hall of Fame inductee and 1997 Napa County Football Player of the Year Conrad Alvarez.

“He’s a big, strong kid. He made a great play in the 14 GT to score. He's gaining more experience every time, so it's very important obviously being a junior, and him being kind of the guy that we need to count on next year. So excited about his progress. He’s a consummate leader. He works harder than anyone on the team, so we’re very excited about him moving forward.”

Justin-Siena (4-4, 2-2 VVAL) got its lone score of the game when Robby Sangiacomo picked up a fumble and rumbled to the end zone from 52 yards out on the first play of the fourth quarter.

“I’m gonna put that on me,” Leach said of the scoop-and-score. “We tried to run a naked bootleg and I looked up saw the outside backer. I probably should’ve called timeout or called it off. Obviously, the player needs to execute and not fumble. But at the same time, I'll put that on me. I told the team that was on me. That was a bad call.”

Justin-Siena head coach Brandon LaRocco, who is also the defensive coordinator, said the score was on a play the Braves work on in practice.

“I just called a good stunt to the play they had called,” the coach said. “I think they were doing a play-action pass throwing out to the strong side. I brought some pressure on the strong side on the edge. So we got there before the quarterback saw us, caused the fumble, and then Robby just scooped and scored like we practice all the time. It’s good to see that pay off.”

Vintage returns to Memorial Stadium to face Sonoma Valley next Friday at 7 p.m. Justin-Siena has its bye next week before finishing VVAL play with back-to-back road contests against American Canyon and Casa Grande.

Justin-Siena and Vintage held a fundraiser, “2 Schools, 1 Voice,” to honor 2018 Vintage graduate Alaina Housley, who died in the Thousand Oaks mass shooting on Nov. 7, 2018, and Addie Dominici, a 6-year-old Browns Valley Elementary student who died when a pallet of folding chairs fell on her on Sept. 21, 2019. “2 Schools, 1 Voice” T-shirts were sold and fans of both teams were encouraged to wear them, with the proceeds going to Alaina's Voice Foundation to raise mental health awareness, and spectators were asked to wear camouflage in honor of Dominici.

The Crushers (6-1 VVAL, 4-0 VVAL) ended the Braves’ home win streak. The Braves (4-4, 2-2 VVAL) took a 7-0 lead in the first quarter with a precision drive capped by a 14-yard scoring strike from quarterback Drew Sangiacomo to wide receiver Stevie Todd and an extra point by Parker Schuemann.

“We came out fired up and ready to play tonight,” Justin-Siena head coach Spencer Joske said.

But Vintage scored on its subsequent drive and never looked back.

“Losses are tough and 42-7 is a decisive loss, but I was very proud of our team,” Joske said. “It is easy for a group of young men to get down during a game like tonight. But from the first whistle to the final ticks of the clock, our young men played their hearts out. We played with the intensity, passion and the All Heart spirit that we instill at Justin-Siena.”

Sangiacomo completed 17 of 24 passes for 72 yards, 1 touchdown and 1 interception. He spread to ball to eight different targets, his longest completion going to Dallas Logwood for 17 yards.

Justin-Siena’s defense was led by Henry Meyers with 5 solo tackles, and Austin Dragoo, Todd and Logwood with 3 solo tackles each. Logwood added an interception late in the game.

Vintage Football Preview: Crushers eager to show might in playoffs

The Vintage High football team is ready to show what it can do with a strong preseason and postseason, after getting to experience neither during a COVID-shortened, 6-0 spring campaign.