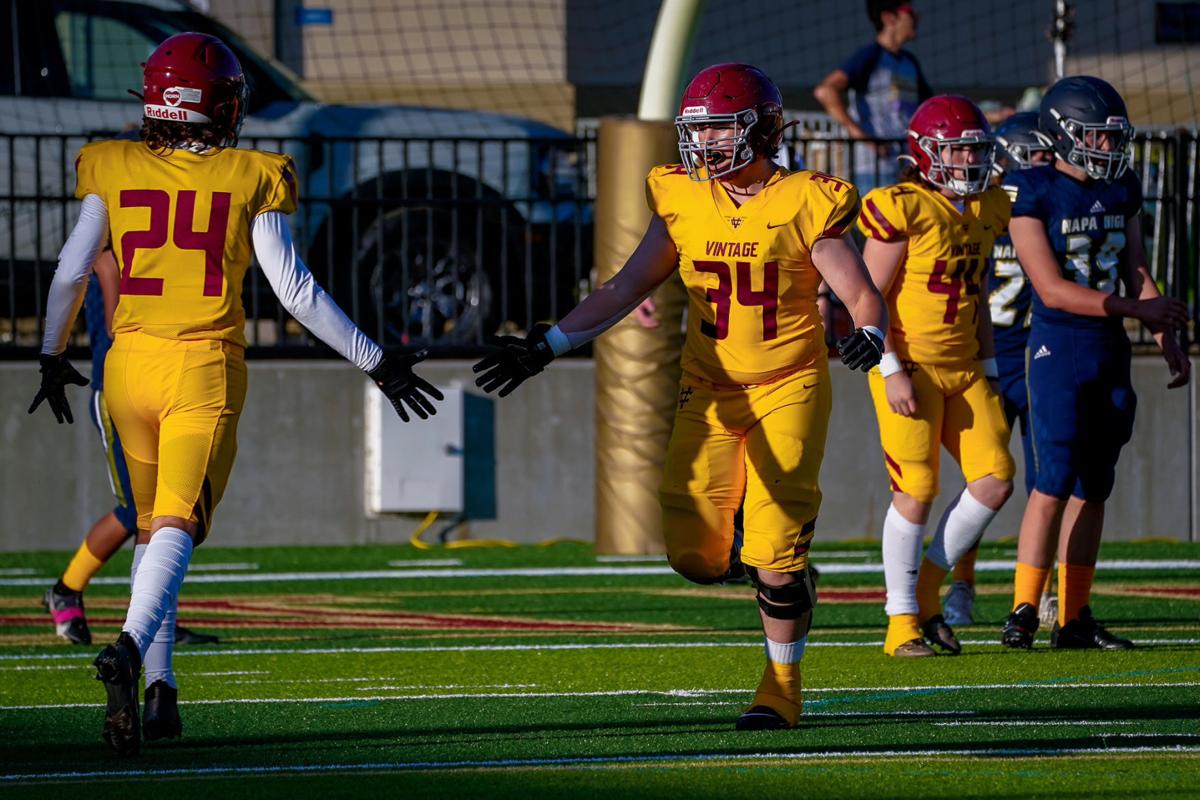 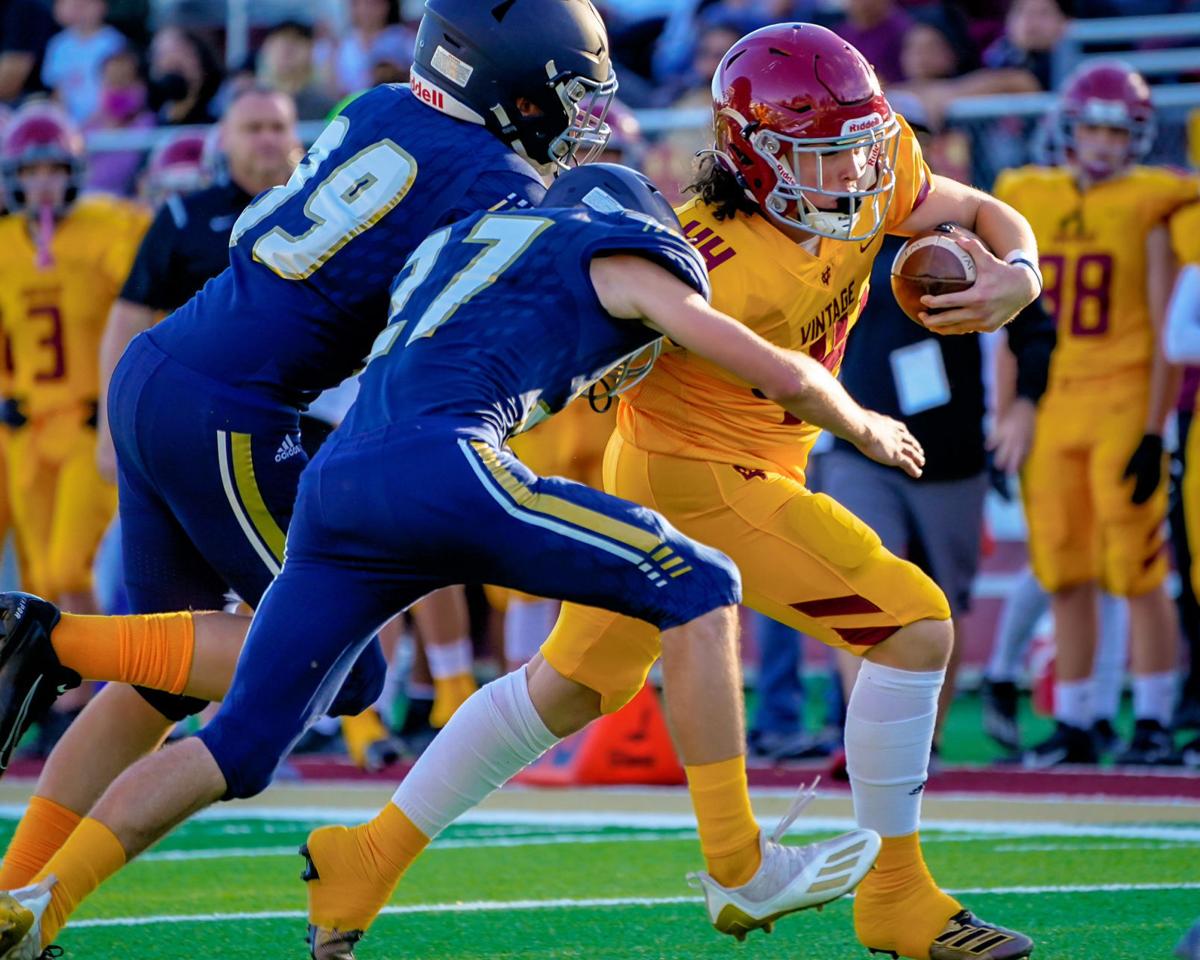 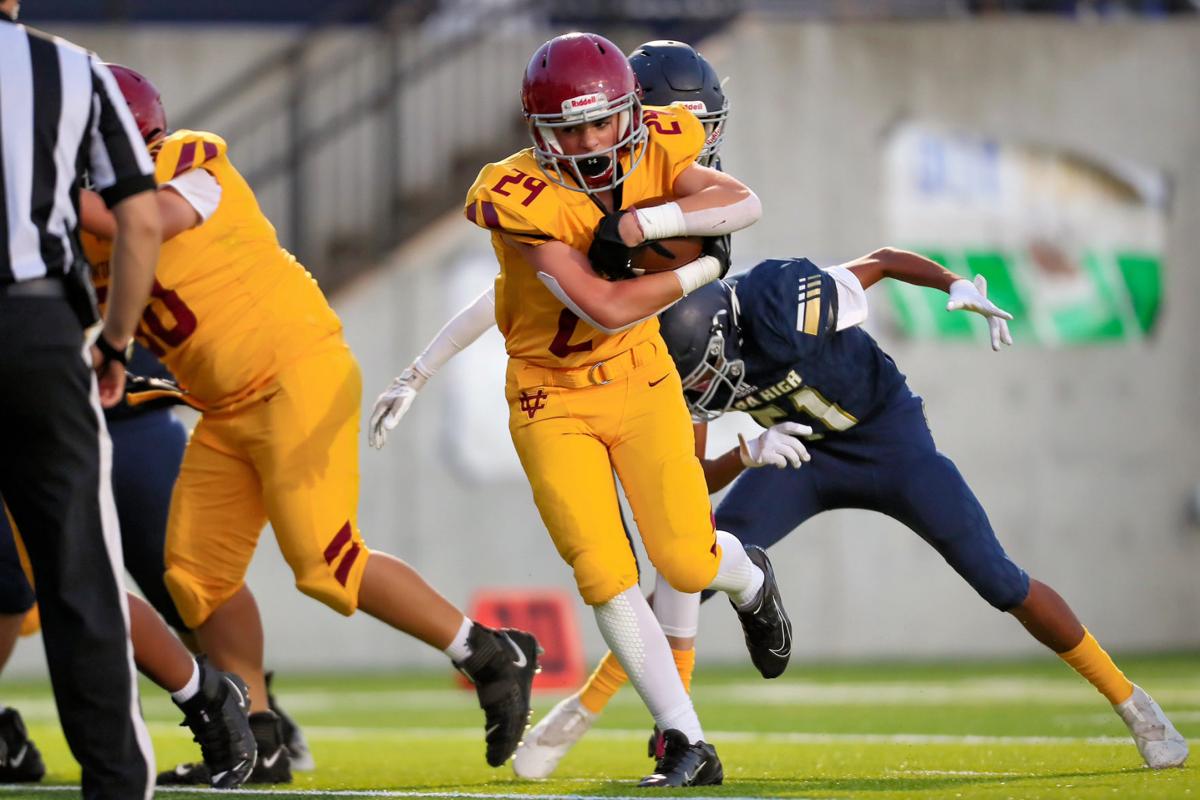 Vintage junior varsity running back Owen Swartley (29) breaks into the clear against Napa High on Oct. 29 at Memorial Stadium. 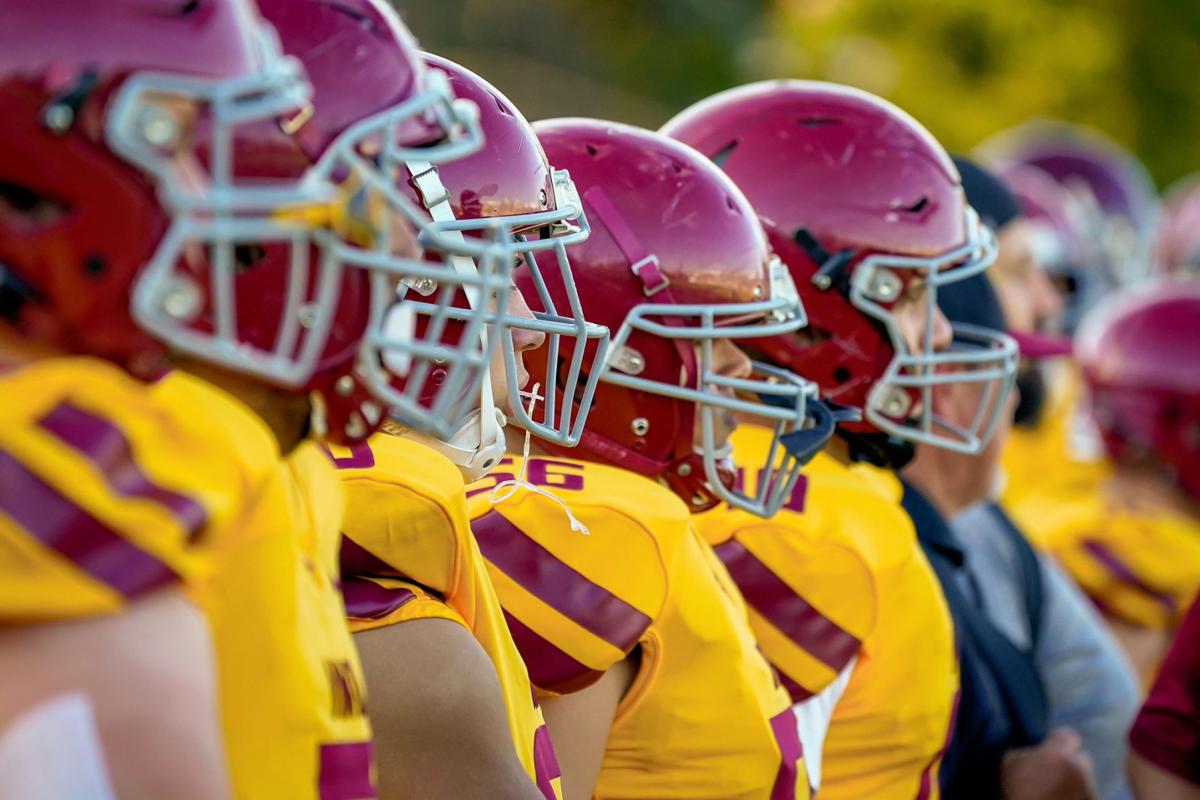 Vintage junior varsity players listen to the national anthem before their game against Napa High on Oct. 29 at Memorial Stadium. 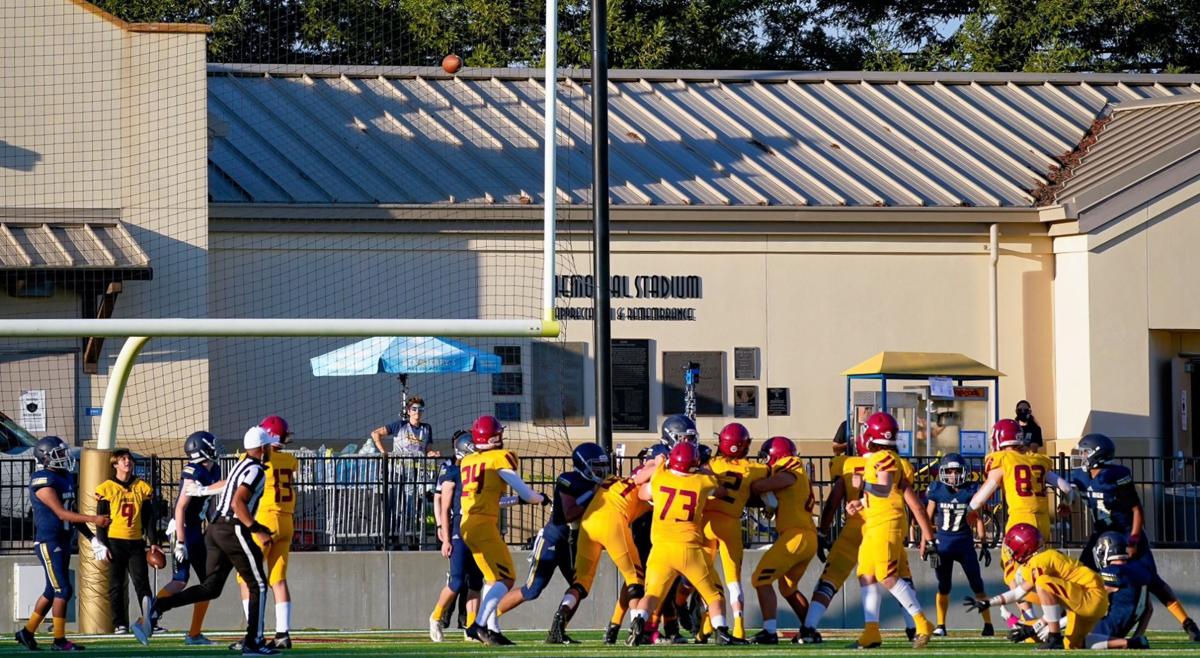 Vintage junior varsity players watch a kick go through the uprights against Napa High on Oct. 29 at Memorial Stadium.

The Vintage High junior varsity football team started its season knowing it would have neither a perfect season nor a 10-game campaign, but the Crushers made the best of the rest of it.

After their season opener at San Ramon Valley was canceled due to smoke from wildfires making the air unhealthy in Danville, the Crushers hosted an El Cerrito squad that did have a game under its belt and lost 14-0 — the first shutout loss for the program since 2015.

Head coach Kyle Schuh’s squad played like it had a chip on its shoulder in its remaining eight games, averaging 50 points per contest and outscoring opponents 399-91.

“I am very proud of the kids and what they accomplished this year as a team,” said Schuh after his 10th season at the JV Crushers’ helm. “We dealt with some adversity to start the season with COVID issues, like lots of teams did this year, but the kids battled through and we were fortunately able to keep ourselves healthy throughout the rest of the season.”

With the assistant of running backs coach Conrad Alvarez, offensive line coach Andrew Downing and wide receiver coach Daniel Alvarez, the offense fired on all cylinders this season, racking up 401 points and just over 3,200 total yards.

Jeffrey Page had a memorable season at running back, rushing for 1,424 yards and 21 touchdowns in 120 carries and averaging 11.9 yards per carry. He gained about a fifth of it with a 22-carry, 310-yard, four-touchdown effort in a 47-30 win at second-place Casa Grande.

Sabbagha and Brandt, played well at quarterback and improved greatly.

The wide receivers were led by Trey Sanderlin with three touchdown catches and Jayden Wooten with one, as they rotated with Riley Fonville, Vincent Ramirez, Kamren Razzi, Finn Salese and Alberto Contreras.

Starting on the offensive line, Jacob Mendez, Oscar Contreras, Joseph Ellis, Drake Sampton and Gabe Rocha rotated with Monte Martin, Noah Lustig and Drake Waters and blocked for an offense that rolled up 3,021 yards and average of 11 yards per carry.

The unit finished with 12 interceptions, six fumble recoveries, 10 sacks and six defensive touchdowns — two by McCaffrey, two by Madole and one each by Adam Drozdowicz and Sanderlin.

DeGarmo led the linebackers in sacks, with lots of help from Matthew Matheson, Drozdowicz, Ellis and Madole and strong contributions from Carson Teagarden, Owen Swartley and Wooten.

Leading on the defensive line were Matthew Stephenson and Joseph Celsi, with help in the rotation from Aiden Riddleberger, Jorge Llanos-Raya, James Haberman, Rocco Grazier, Eduardo Alfaro and Diego Tellez.

The defensive backs were led by Esteban Valencia, McCaffrey and Sanderlin, with Ayden Ruotsi, Dylan Sublett, Cody Morton and Salese rotating in.

“It makes me very happy as a coach to say that all of the players got the opportunities they did throughout the year in the games and were all able to contribute to the team’s success in their roles,” Schuh said. “I think the future is bright for them and the program.”

Josh DeGarmo was in charge of equipment and position assistance.

“I could not be more grateful for the staff I have and all the work that they all do that makes my job so much easier,” Schuh said. “I could not ask for a better group of people to work with and that care about the kids and this program like they do.”

Vintage junior varsity running back Owen Swartley (29) breaks into the clear against Napa High on Oct. 29 at Memorial Stadium.

Vintage junior varsity players listen to the national anthem before their game against Napa High on Oct. 29 at Memorial Stadium.

Vintage junior varsity players watch a kick go through the uprights against Napa High on Oct. 29 at Memorial Stadium.