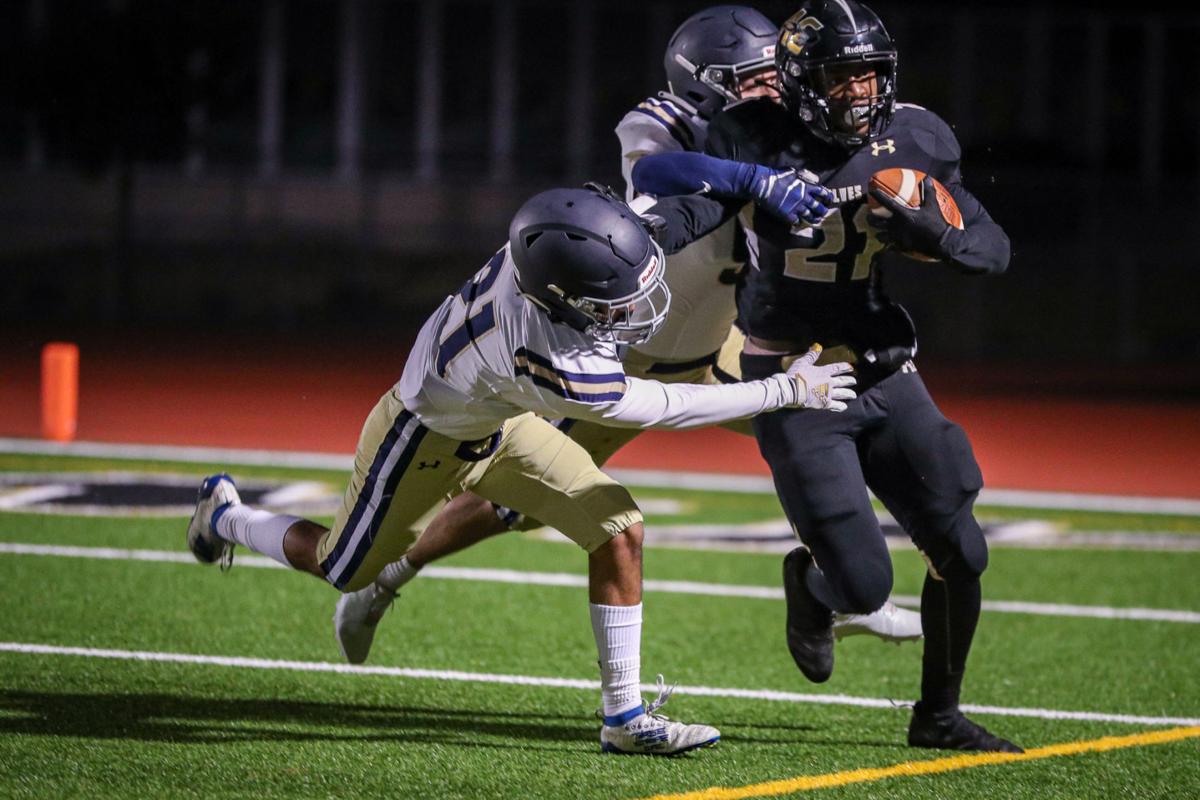 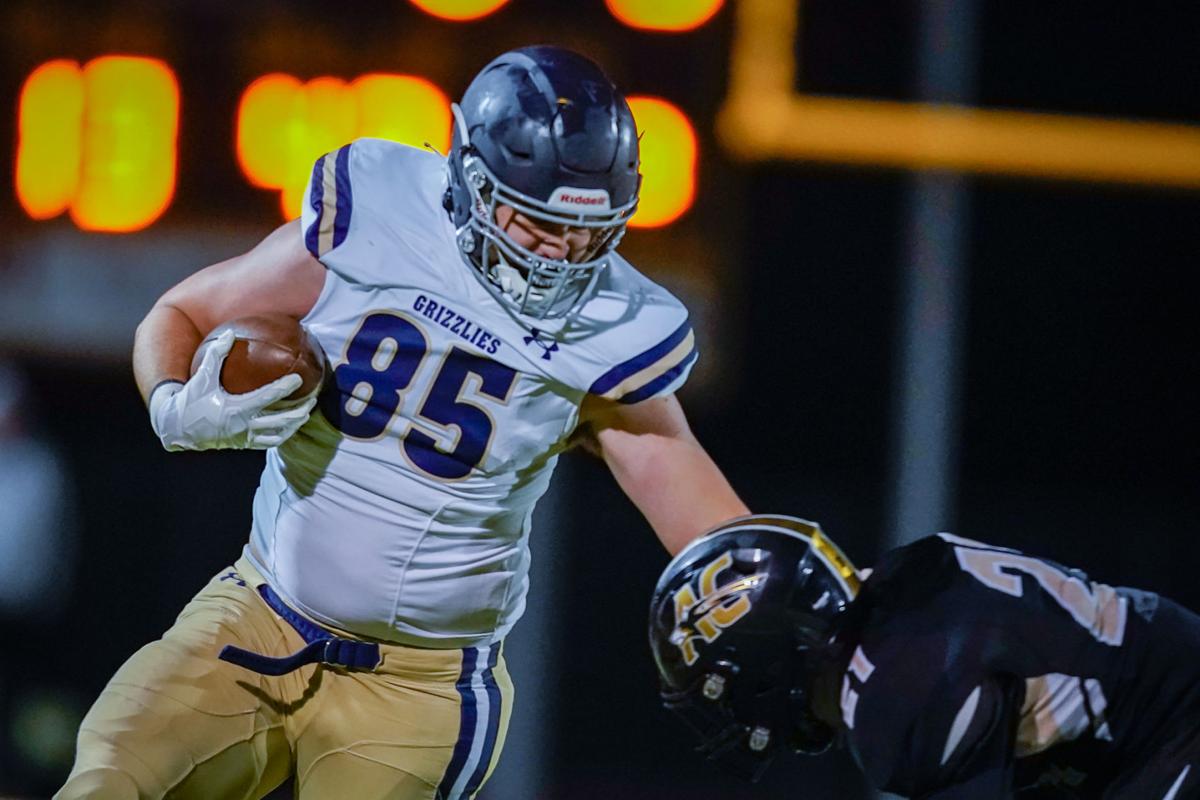 Napa High's Jack Giguiere (85), after catching a pass from quarterback Mal Turner, and hustles for more yards before being stopped by American Canyon's Jordan Fisher on Friday night in American Canyon. 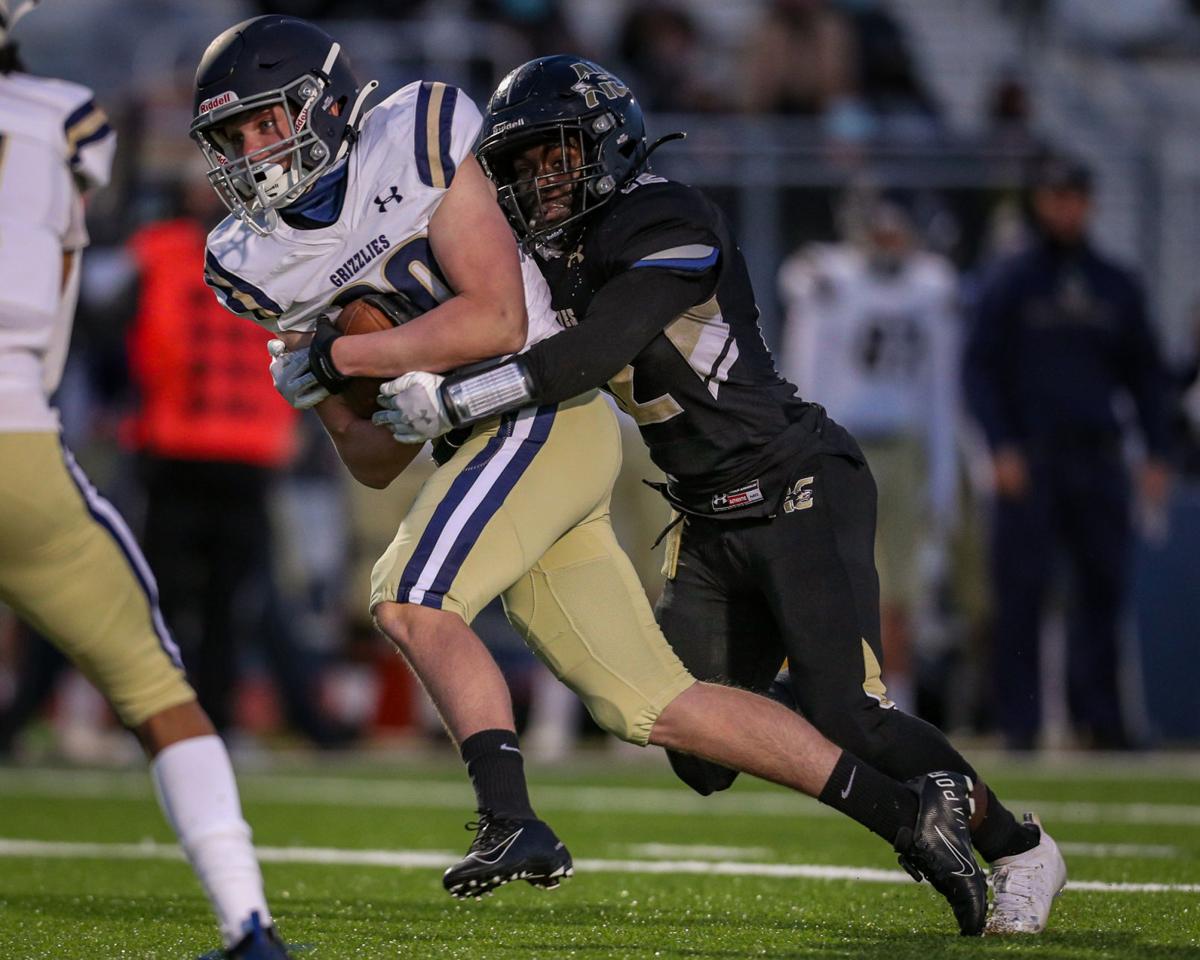 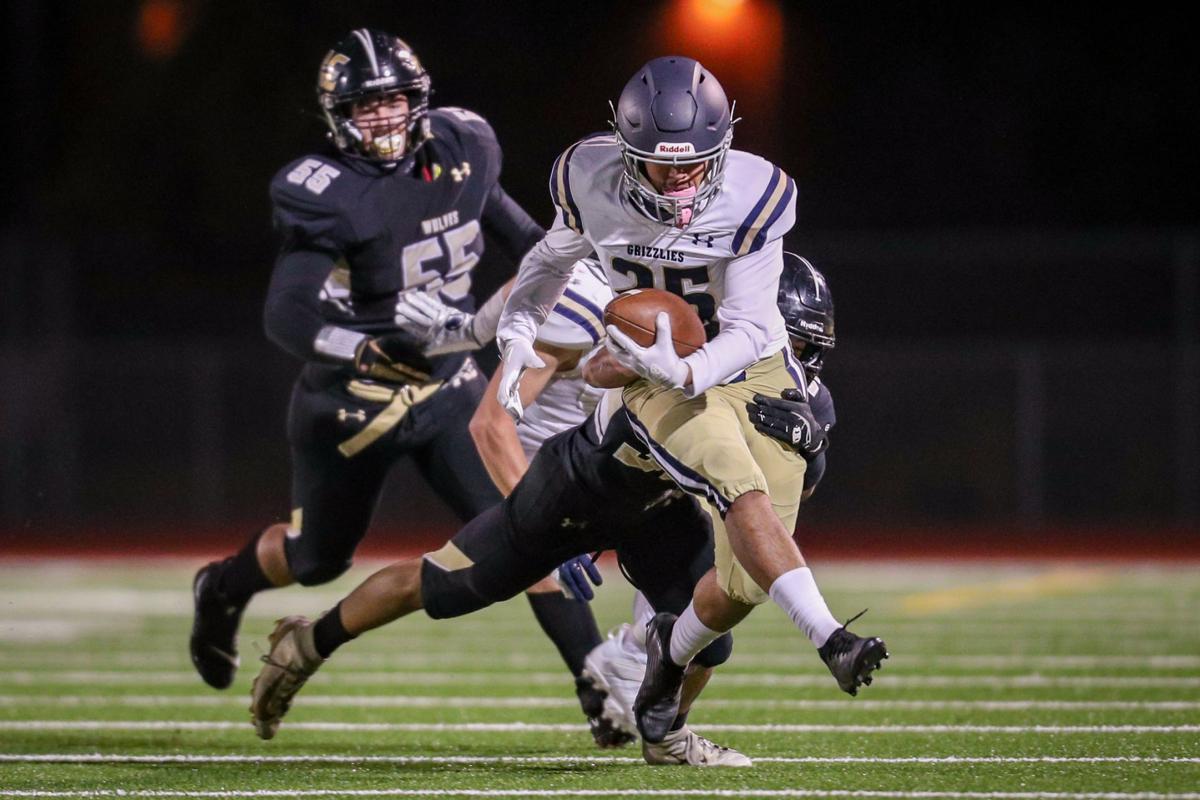 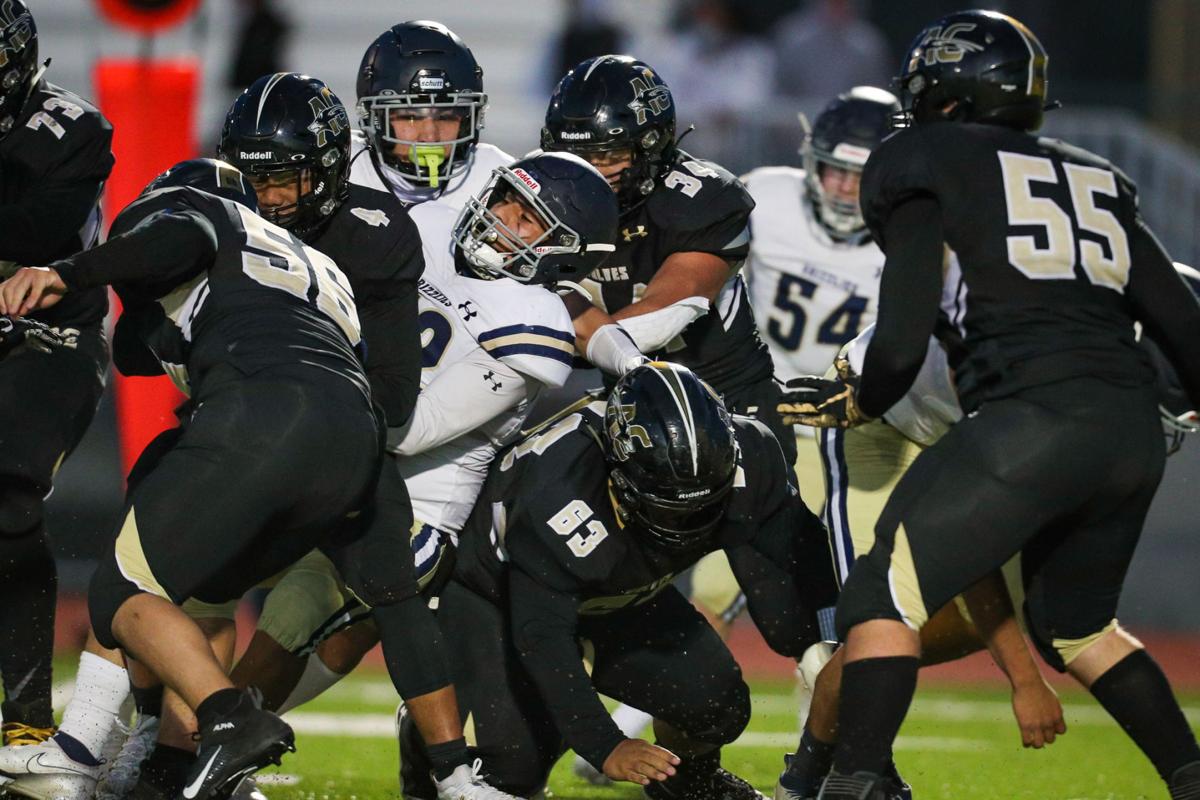 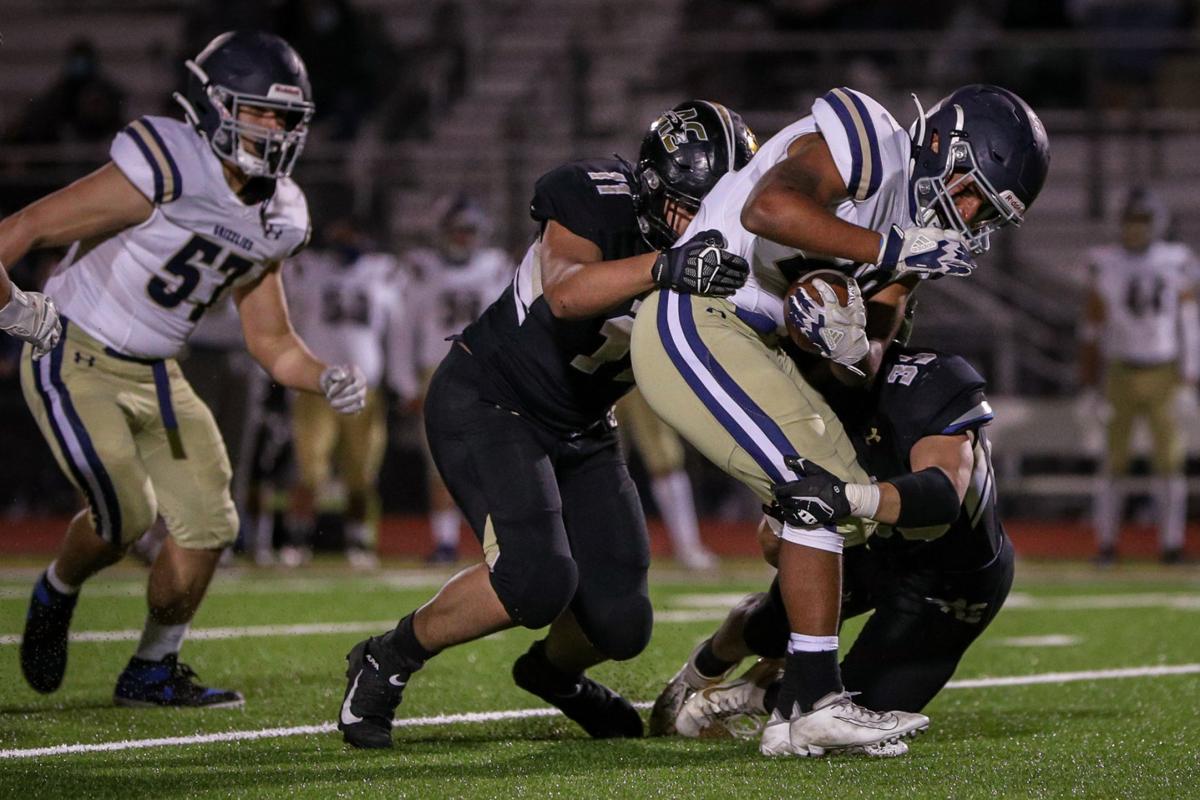 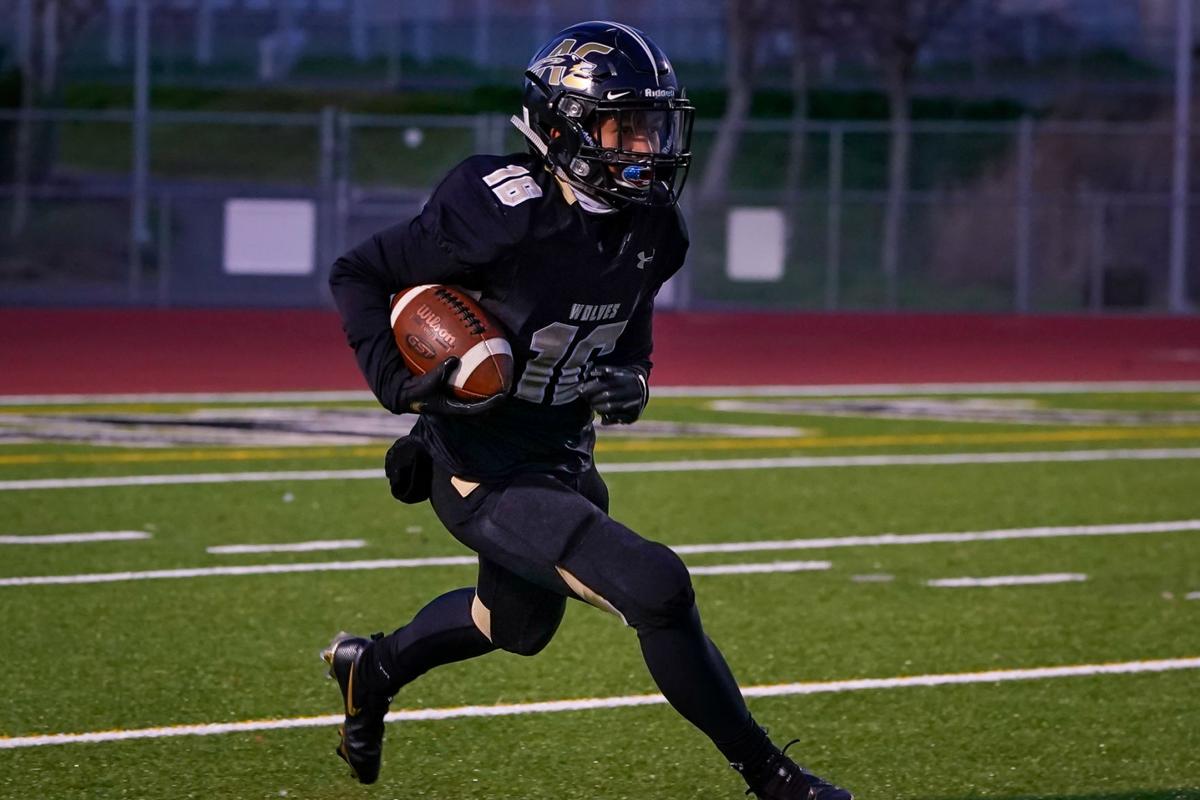 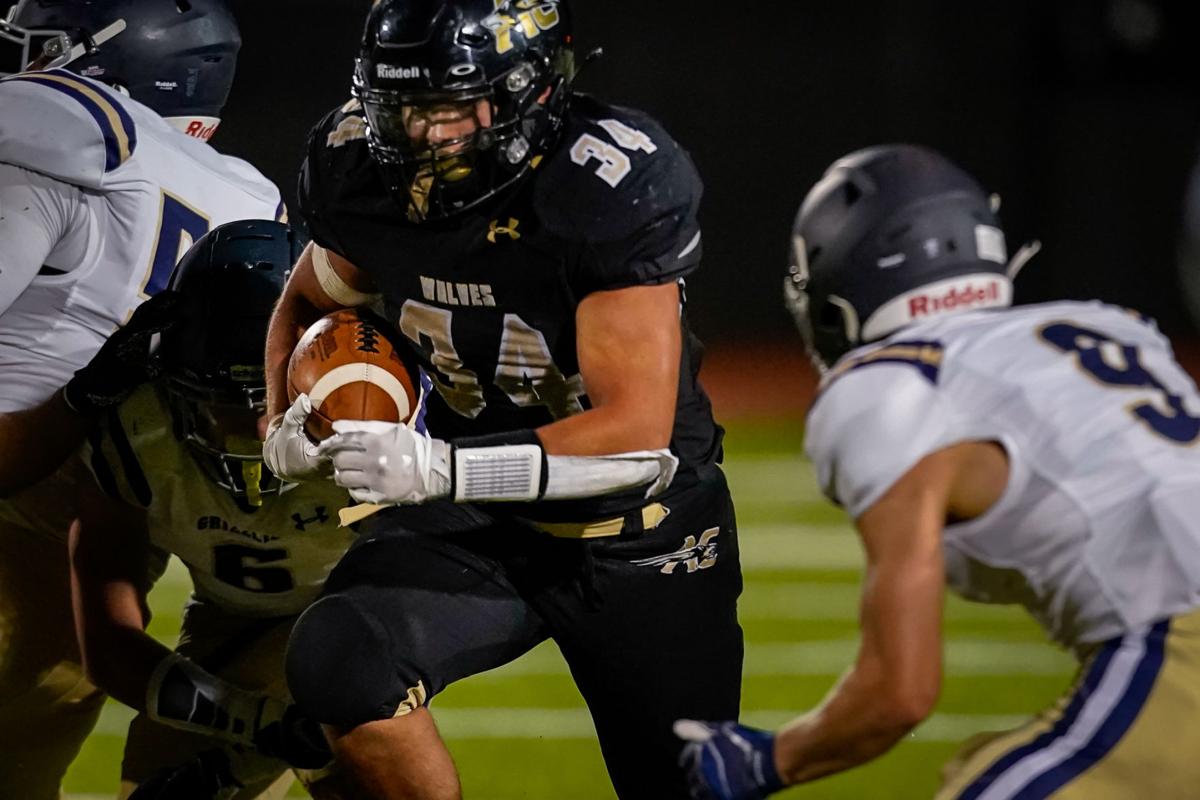 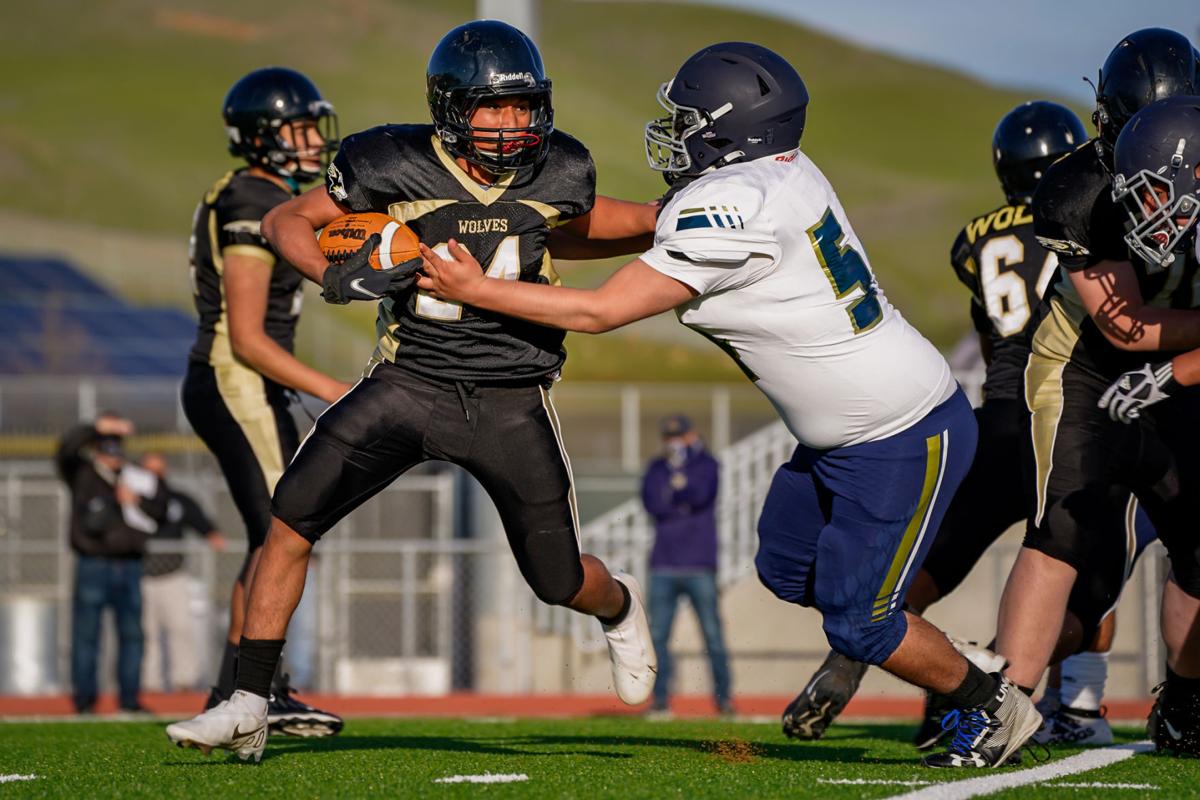 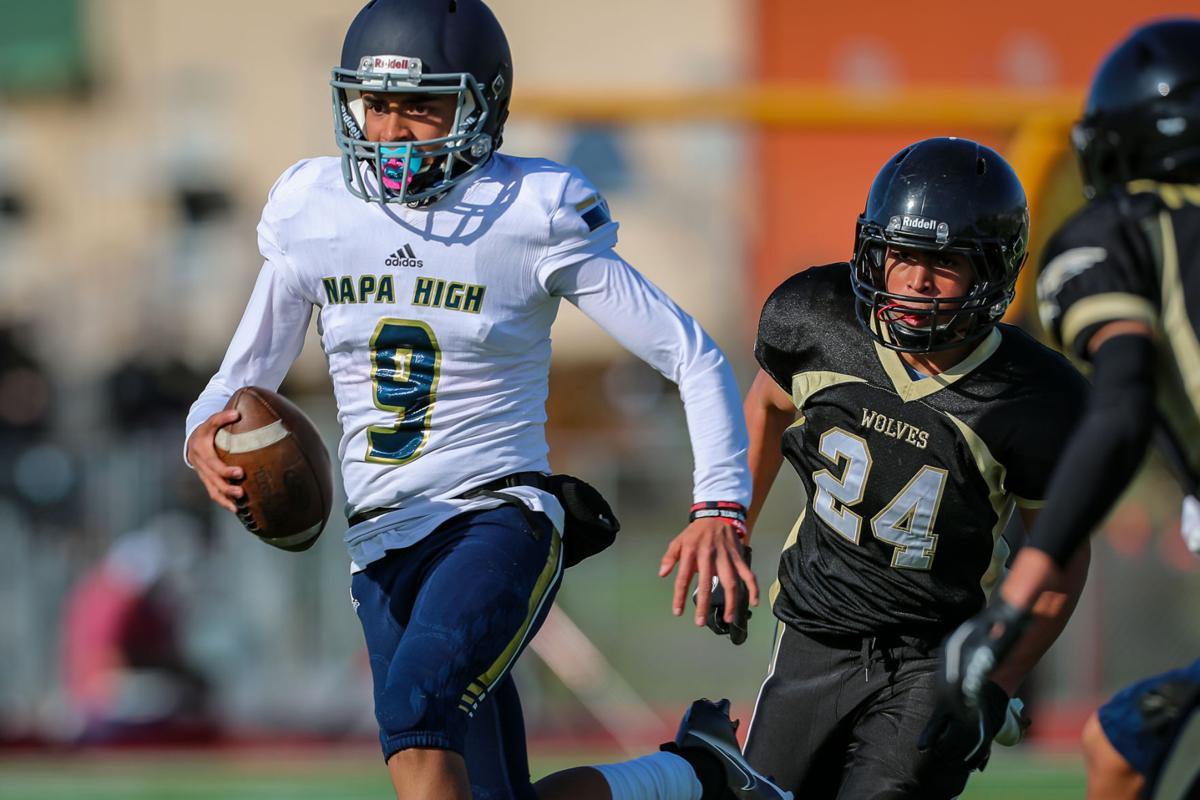 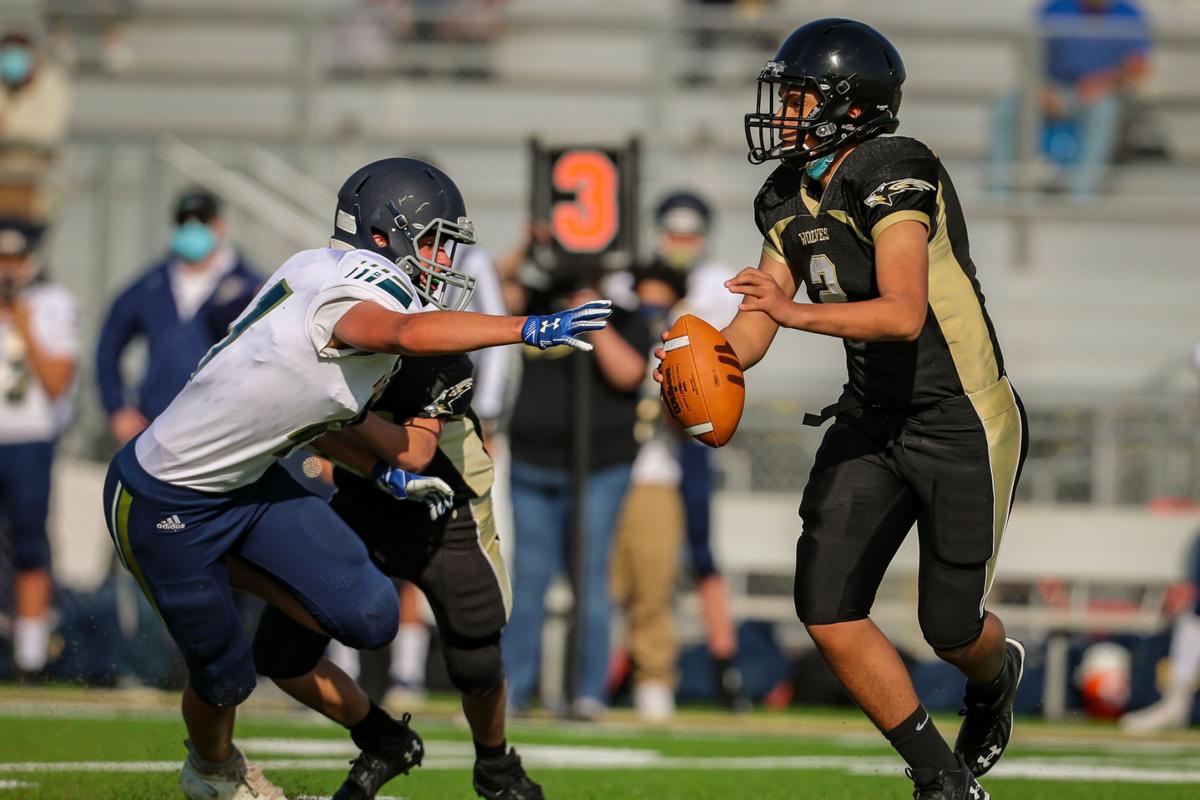 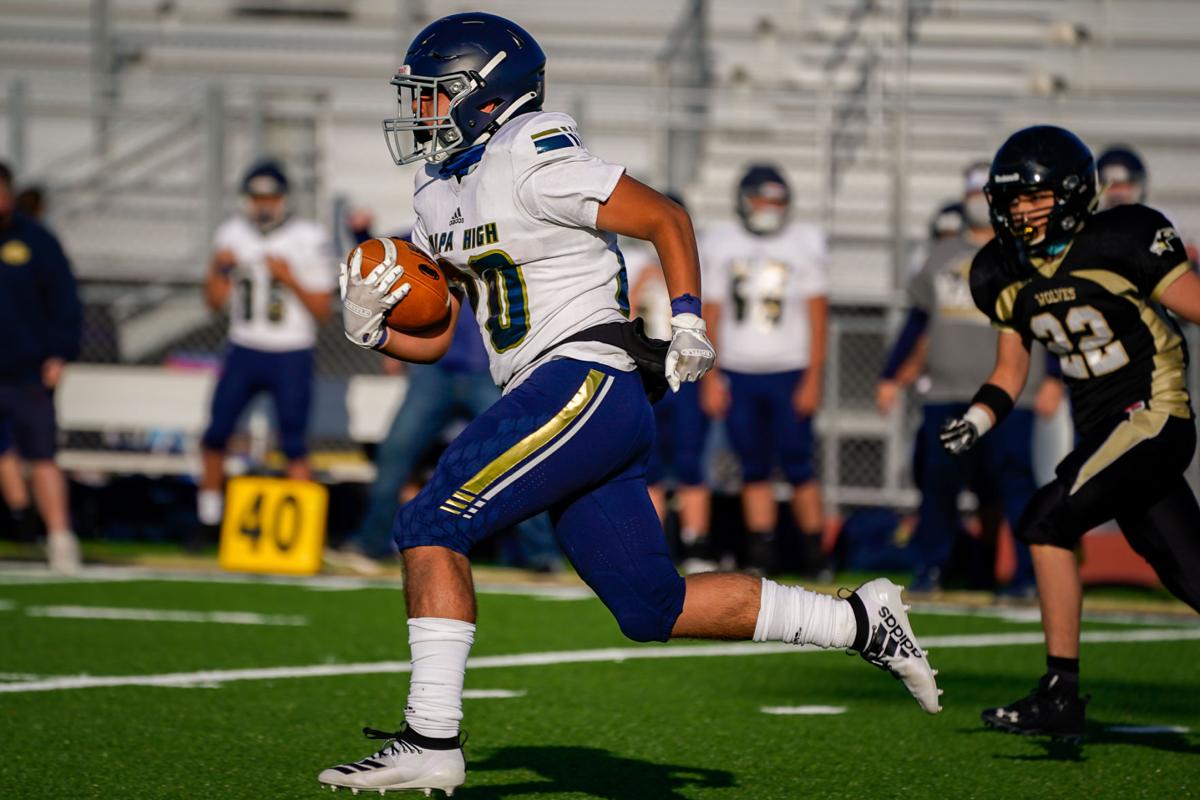 AMERICAN CANYON — In Friday night’s high school football game between Vine Valley Athletic League combatants Napa and American Canyon, one team looked to establish a body of work in its debut while the other hoped to make incremental progress from its first game.

The Wolves spoiled Napa’s season opener, 13-3, improving to 2-0 in the abbreviated spring season, as defense was the order of the day on both ends.

Napa had four trips inside the Wolves 20-yard line but could muster only three points, on a 32-yard Oscar Sotelo-Nunez field goal. The other trips into scoring territory resulted in two missed field goals and a turnover on downs twice.

“Those kids were gritty,” Wolves head coach John Montante said of his defense. “They were in some tough spots and they rallied.”

“The defense played hard,” Adams said. “We gave up 13 points, which hurts, but they played their butts off. We got turnovers and pursuit, which I was worried about coming into the game. We pursued well and we were physical.”

As for the tale of the tape, the Wolves defense held Napa to 92 yards of offense on 57 snaps. American Canyon had Grizzlies quarterback Mal Turner under duress in recording four sacks, two by Kopono Liu and one each by Ezekiel Anderson and David Garcia.

Liu also had three tackles for lost yardage, George Konoval added two, and Jordan Fisher and Camren Lee each had one. Joseph Lopez, Liu, Garcia, Anderson and Konoval each had an impact tackle (gains resulting in 1-3 yards).

“Our tackling got better (from last week),” Montante said. “There are some things we did well on offense, even though it is not evident. We’re catching the ball pretty decently. There’s growth and things to be proud of, but always things to work on.”

While American Canyon produced just enough offense to come away on the victory side of the ledger, the Grizzlies turned in some stout defense of their own. Napa held American Canyon to 181 yards on 57 plays.

Joseph Reyes and Leo Contreras each recorded a tackle for a loss. Thomas Hatton, Rudy Hernandez and Reyes each had three impact tackles, while Berna Leon, Omar Gonzalez, Isaac Rojas and Spencer Gorman each had one. Leon, Hernandez, Rojas and Reyes each registered a quarterback sack, and Rojas also recovered two fumbles.

While the American Canyon running game produced very little, 65 yards on 43 attempts, the aerial game produced in a timely fashion. Senior quarterback Vinnie Espejo completed 10 of 14 passes for 116 yards, two touchdowns and no interceptions. Trenton Angold and Fisher were on the receiving end of the scoring strikes, from 21 and 11 yards, respectively.

Montante hopes that such plays can create real estate that he desires in the run game.

“If you can make the defense horizontally and vertically, it helps,” the coach said. “You want to have as many dimensions as you can.

“We always want to continue working on assignment recognition, along with fine-tuning and honing assignments. We want to be better every day.”

With the season being truncated to VVAL opponents only, programs in California that are permitted to play are still navigating the COVID-19 pandemic even as the trend continues to be positive amid more people getting vaccinated. With Napa County presently in the second-most restrictive red tier, two adult spectators per student-athlete were allowed in the stadium — a far cry from the normally raucous Wolf Den Stadium.

“We’ll play in a parking lot,” Montante said. “All of these football programs across the state have been through so much. There are still some that aren’t playing. Whether the game is here, Memorial Stadium (in Napa) or a parking lot, these kids will play.”

The Wolves venture to Memorial Stadium next Friday to visit their nemesis, the Vintage Crushers, who are also 2-0 after blasting Petaluma 57-0. The programs have met four times. American Canyon won the first meeting in 2016, but Vintage has won the last three.

“The kids have to play better than they did tonight,” Montante said. “You always want to play a complete game. That’s your measuring stick. It doesn’t matter if it’s Vintage, Alabama or 49ers. You have an opponent that presents challenges, but it’s about what you do and how well you prepare and perform when the whistle blows.”

Napa visits Dodd Stadium next Friday to face the Justin-Siena Braves, who are also 2-0 after beating the Sonoma Valley Dragons 38-14.

Adams hopes to see his offense get better at finishing drives.

“It’s a new offense,” the coach said. “The kids tried their hardest. The coaching staff did a good job putting the offense together.”

“We’re going to evaluate it like we would any other season. It’s just shorter. We’ve got to evaluate quickly and get the right players out there. We have to play disciplined football. I thought we played hard, but we made too many mistakes. But we’ll get them fixed.”

Napa led 7-2 after three periods, but the Wolves scored 18 unanswered points in the final quarter. Ojani Castillo and Danny Maloney scored on 1-yard runs while Tommy Chau returned a fumble 10 yards for a score. Castillo had 137 yards on 20 carries.

Wren Ducot tackled Grizzlies quarterback Diego Montanez in the end zone for a safety. Napa’s only score was on a Carlos Mata 84-yard kickoff return.

Through two games, American Canyon’s defense has not given up a score. The Grizzlies had a total of minus-33 yards of total offense, with five errant shotgun snaps being the key culprit.

For the Wolves, Rigo Hurtado and Chau each had two tackles for losses. Matthew Jones, John Kyle Frogozo and Hurtado each had an impact tackle.

The Grizzlies had some defensive bright spots, as well. Jose Leyva Montanez had an interception and Jose Martinez Amezcua and Mata each recovered a fumble. Mata also added two tackles for losses, while Orion Hoskins and Amezcua each had one.

WATCH NOW: NCAA PLAYERS PUSH FOR REFORM AHEAD OF TOURNAMENT

Napa Valley Prep Boys Tennis: Crushers look back on what could have been

The Vintage High boys tennis team couldn't play for individual Vine Valley Athletic League or North Coast Section titles because of the COVID-19 pandemic, so it focused on dominating its eight league matches.

Napa High's Jack Giguiere (85), after catching a pass from quarterback Mal Turner, and hustles for more yards before being stopped by American Canyon's Jordan Fisher on Friday night in American Canyon.