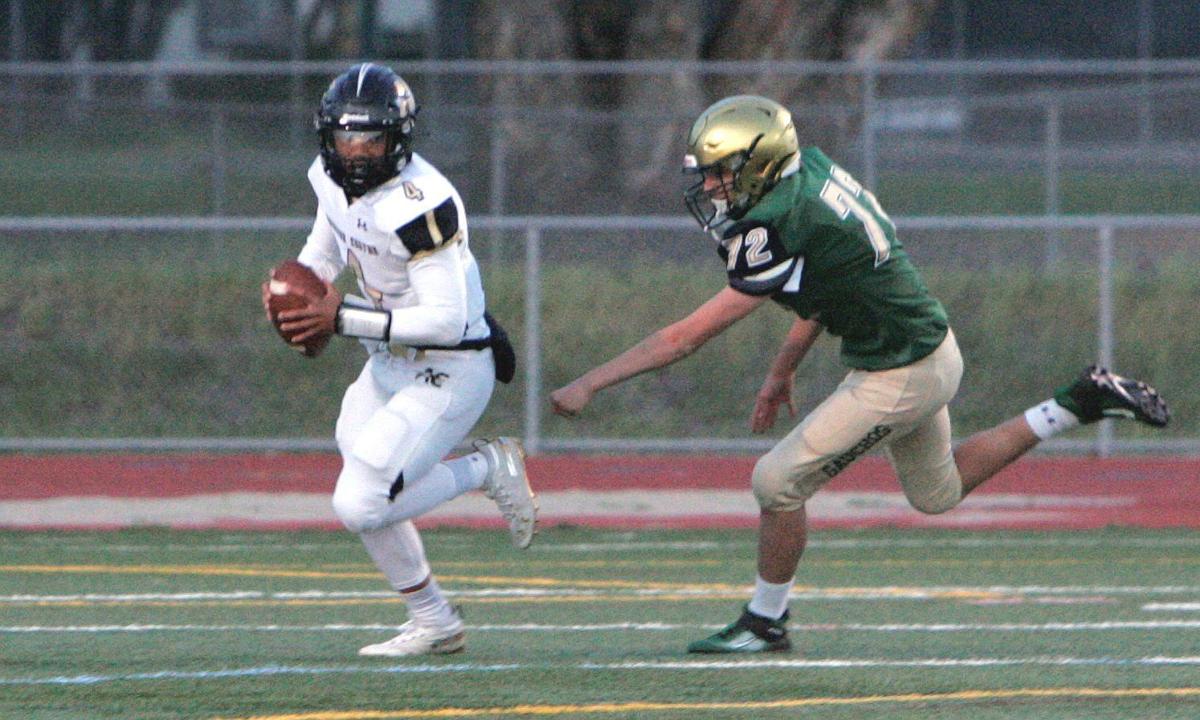 American Canyon quarterback Vinnie Espejo was running more sideways than upfield in the first half at Casa Grande on Friday night. 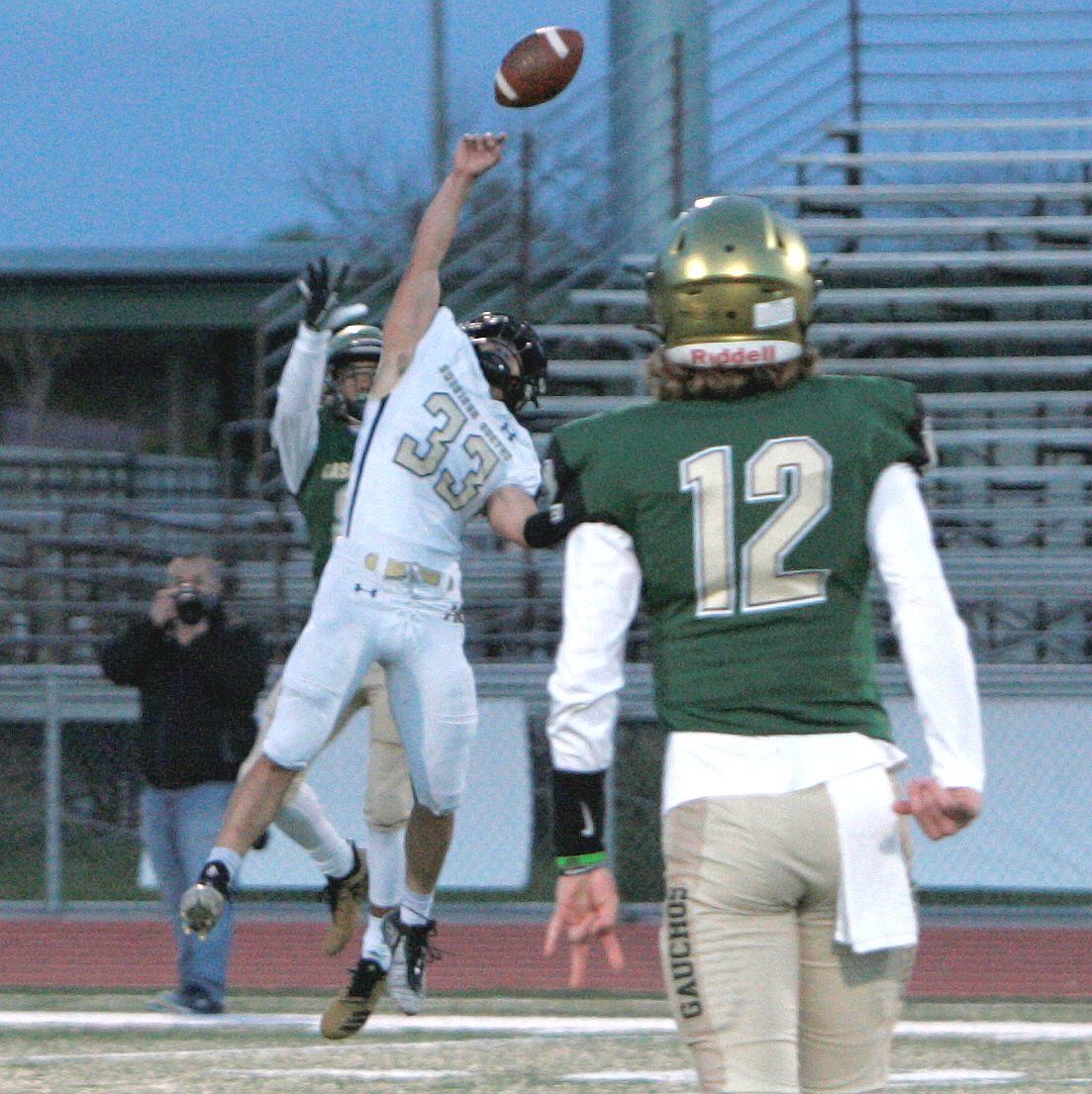 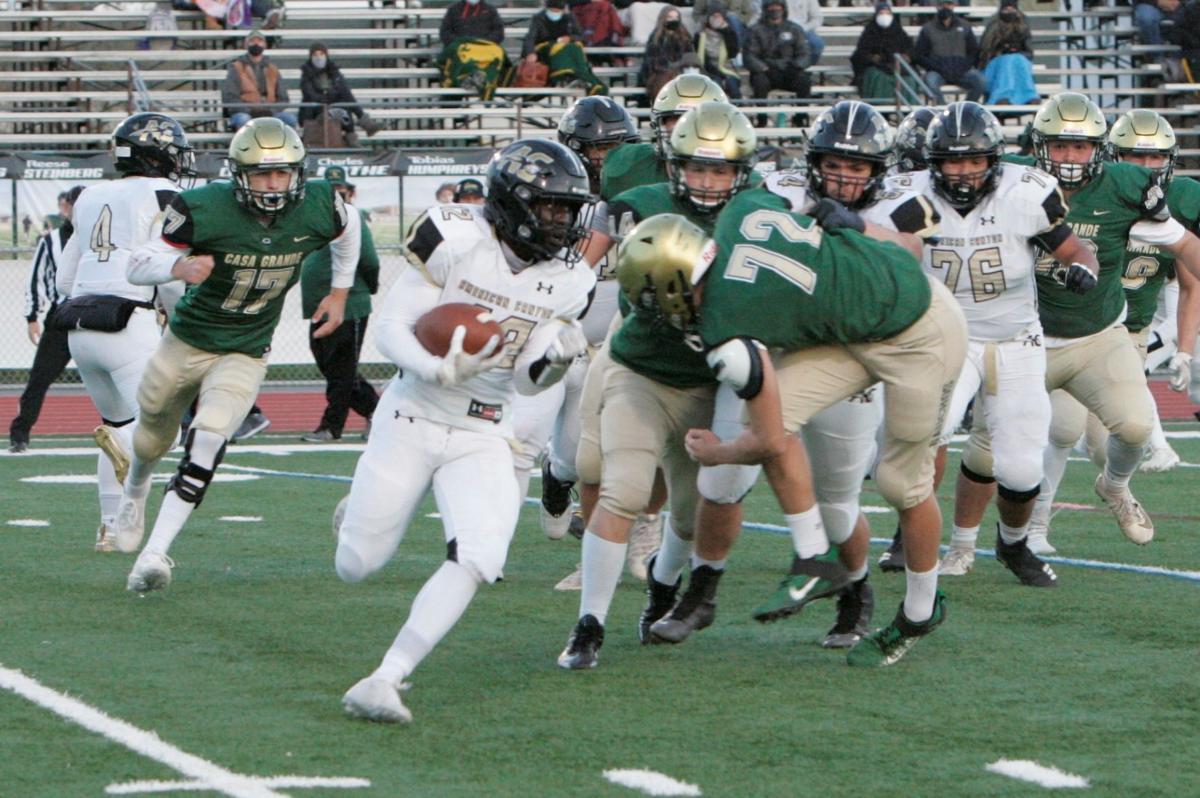 Camren Lee turns the corner for one of American Canyon's few long gains in the first half at Casa Grande on Friday night.

PETALUMA — The Casa Grande football team was hardly slow out of the gates after a pre-game Senior Night ceremony Friday night.

The Gauchos’ two junior quarterbacks, Jacob Porteous and Dominic Feliciano, completed one long pass after another and had a 36-point lead three minutes into the third quarter.

Just when it looked like American Canyon would lose with a second-half running clock for the second game in a row, having been shut out by Vintage the week before, the Wolves chipped away.

After giving up another long Casa Grande touchdown later in the quarter, American Canyon scored 24 unanswered points in the fourth before running out of time and falling 49-46.

If there ever was a moral victory, this was one.

“We wanted to come back from last week’s devastating loss at Vintage and our coaches hyped us up at halftime,” Espejo said. “I think the second half was the best game our team has ever played together. It exposed a lot of what we’re capable of. I have to thank the line for stepped up and doing their job. They said (at halftime) they were sorry and they would come back and do their thing. It makes us wish that all of us had been able to play like this all year.”

Espejo, who had put the Wolves (2-2) on the scoreboard with a 55-yard scamper late in the first half, saw his team’s manageable 28-6 halftime deficit grow to 42-6 with nine minutes left in the third quarter.

“I was started to doubt whether I knew football anymore,” Montante said.

Senior captain Ezekiel Anderson said it helped to put the game in perspective.

“We’ve just got to keep a positive mindset. I think that’s what the whole motto’s been through this pandemic, so we just translate it on the field and it worked out great,” he said. “Obviously we didn’t win, but I know we played our tails off.”

Casa Grande got a 54-yard scoring jaunt from speedy junior Paul Fetterly and, after American Canyon went three-and-out, a 32-yard scoring catch by senior Eli Cappelen had all but the Wolves thinking a running clock was imminent.

Espejo found Jordan Fisher with a 55-yard completion to set up the Benedictine College-bound Anderson’s 2-yard scoring plunge and two-point conversion — the first of three TDs and conversions for the powerful running back and linebacker.

Defense is just as key in a comeback, and Kapono Liu’s interception two plays later got the ball right back. After a nice pump-fake helped Espejo hit Fisher with a 38-yard pass to the 17, Camren Lee’s 14-yard run let up Espejo’s 3-yard touchdown keeper after a nice fake handoff to Anderson on the option. Lee ran in the conversion to make it 42-22.

The Gauchos started to show stress as Porteous had to fall on the ball after the shotgun snap sailed over his head, leading to a punt to midfield.

The comeback stalled briefly after Espejo came up short on a fourth-down keeper. Four plays later, the 6-foot-4 Porteous darted to paydirt from 36 yards out and Ryan Miller capped a 7-of-7 night on extra points for a 49-22 lead with four minutes left in the third.

Despite a 23-yard, highlight-reel catch by Fisher while draped by a defender, American Canyon turned the ball over on downs. But on the last play of the quarter, Liu fell on a Casa Grande fumble at the Wolves’ 35. Seven plays later, Espejo bolted in from 12 yard out to make it 49-30.

“The fun thing about this game for him is he and I were seeing the same thing,” Montante said of Espejo. “He’s yelling at me from the field ‘I want this (play), and that was the next thing I was going to call. It was just back and forth like that. That’s the fun, because that’s the learning of football, and being able to execute it. He saw (the right play) a bunch of times. It was good. He had fun doing it.”

Miller showed he wasn’t infalliable when he missed a 36-yard field goal attempt on Casa Grande’s ensuing possession, but the drive did eat up 5½ precious minutes.

American Canyon need to score quickly and it did, two plays later, when Anderson burst through a hole up the middle and showed his breakaway speed on an 80-yard touchdown run. Lee ran in the conversion and it was a two-possession game, 49-38, with 3:55 remaining.

“I found the crease and the offensive line gave me a big enough hole and I took it all the way,” Anderson said. “The line stepped up. I can’t thank them enough. The improvements they made from this whole season to now are drastic.”

Casa Grande got the onside kick but went three-and-out. Two catches by Fisher set up a 2-yard scoring plunge and conversion run by Anderson with 22 seconds left. But the Gauchos caught a pooch kickoff and ran out the clock.

“A couple more plays and it’s a different result, but it’s a learning experience. The Casa coach has them going in the right direction. They’re going to be good,” Montante said, praising Gauchos head coach John Antonio, a former Calistoga High skipper. “But our kids, man, had every reason to pack it in at halftime. We’re just a couple of steps off here and there and then all of a sudden, it started to click. Line starts to block, backs start to run, Vince starts to hit receivers, receivers start to hold on to the ball. It’s a process, so it’s pretty good to see that improvement. They played hard.”

Espejo threw for a season-high 195 yards, with 152 of them coming at the hands of Fisher.

“Vinnie’s a warrior,” Anderson said. “He’s got a calming mindset that he brings to the table, with our whole team. So when he’s calm we’re all calm and we all know what to do. He’s a great leader. He sticks it out even when a bad play happens. He wasn’t rattled at all. He kept his poise.”

Anderson thought Fisher helped the team come back with his attitude.

“Jordan is very vocal and he tells us to step up even at our lowest points,” he said. “I can’t say enough about him as a person himself. He loves to have fun, I’ll tell you that.”

“Our team, we fought, that’s one thing I can say,” he said. “We had a really good talk at halftime and our line stepped up and I was very proud of them. Our skills made plays once they stepped up. It was hard to not be mad after the way we played in the first half, but we’re young.

“We have a lot of bumps and a lot of bruises and in the first half we started flat. But once we started to feel as if we could do it, our line started to pick it up and that transferred into the second half. That comes with being a leader. You’ve got to keep your team up no matter what. I always tell them ‘Chin up’ because you never know what can happen if you keep fighting. I just kept telling them ‘Let’s go. We got this. Even if you made a mistake, we’re good. Move on and fight back.’”

Montante, who went for two points after every touchdown, said his main kicker, Stockford-Reid, is injured and that fellow lineman Hurtado would have had to kick a tying field goal had it materialized.

Anderson didn’t look like he was going to be stopped on his conversions.

“We knew we were in this game the whole time,” he said. “Obviously we had some doubts, but our leaders stepped up in a big way. I felt like everyone grew up tonight and hopefully matured a lot.”

American Canyon quarterback Vinnie Espejo was running more sideways than upfield in the first half at Casa Grande on Friday night.

Camren Lee turns the corner for one of American Canyon's few long gains in the first half at Casa Grande on Friday night.