Napa Valley Prep Football: Wolves win a wild one over Braves, 50-42
Share this
{{featured_button_text}}
1 of 14 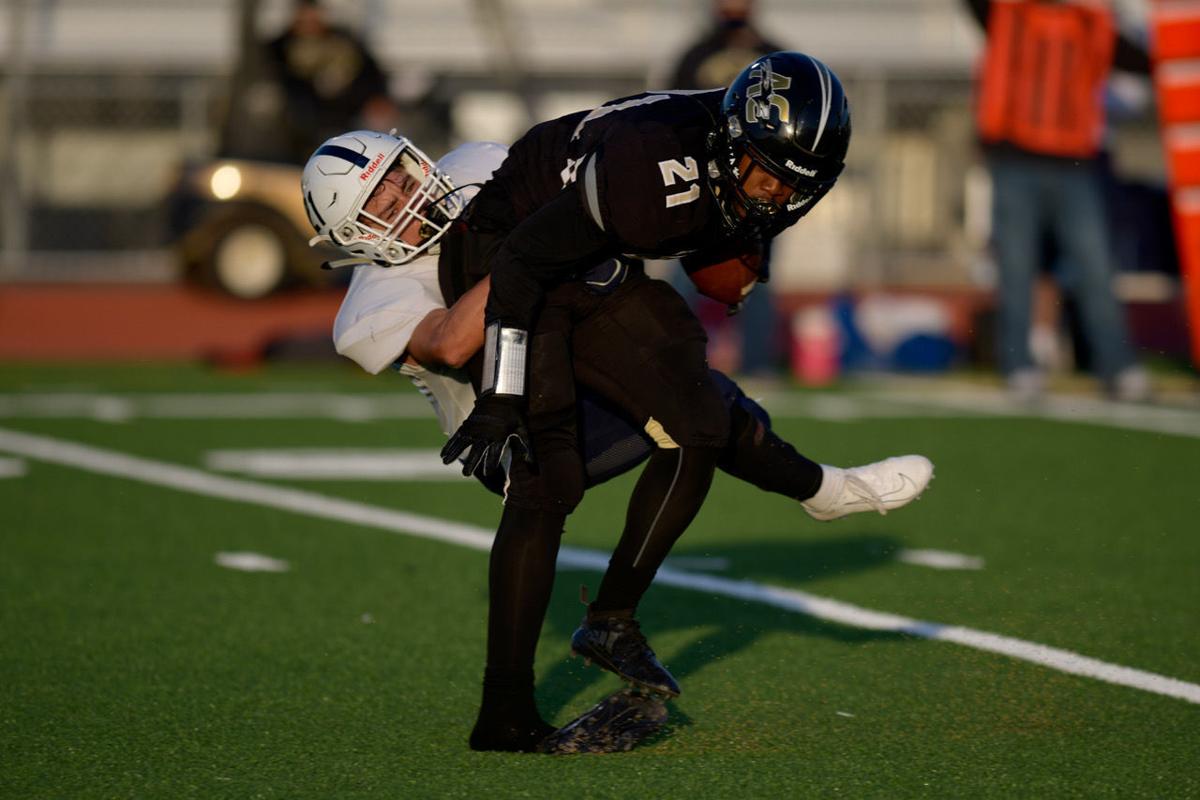 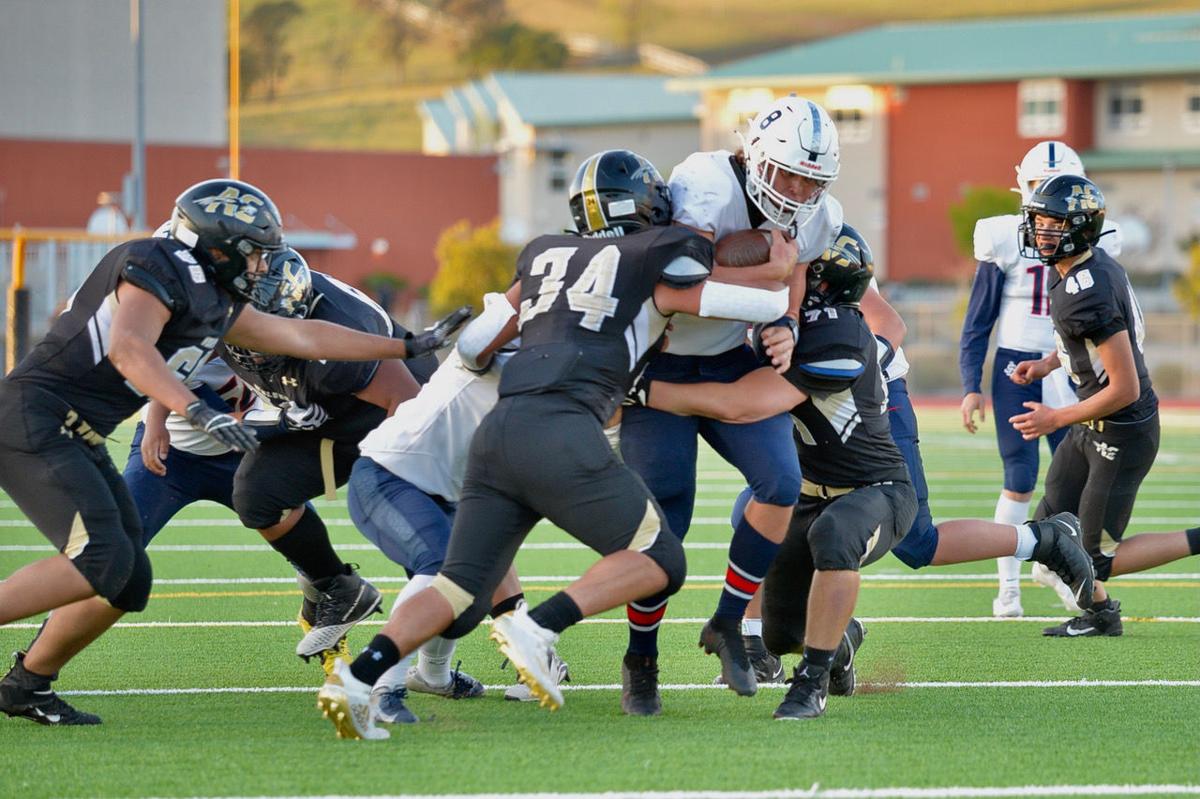 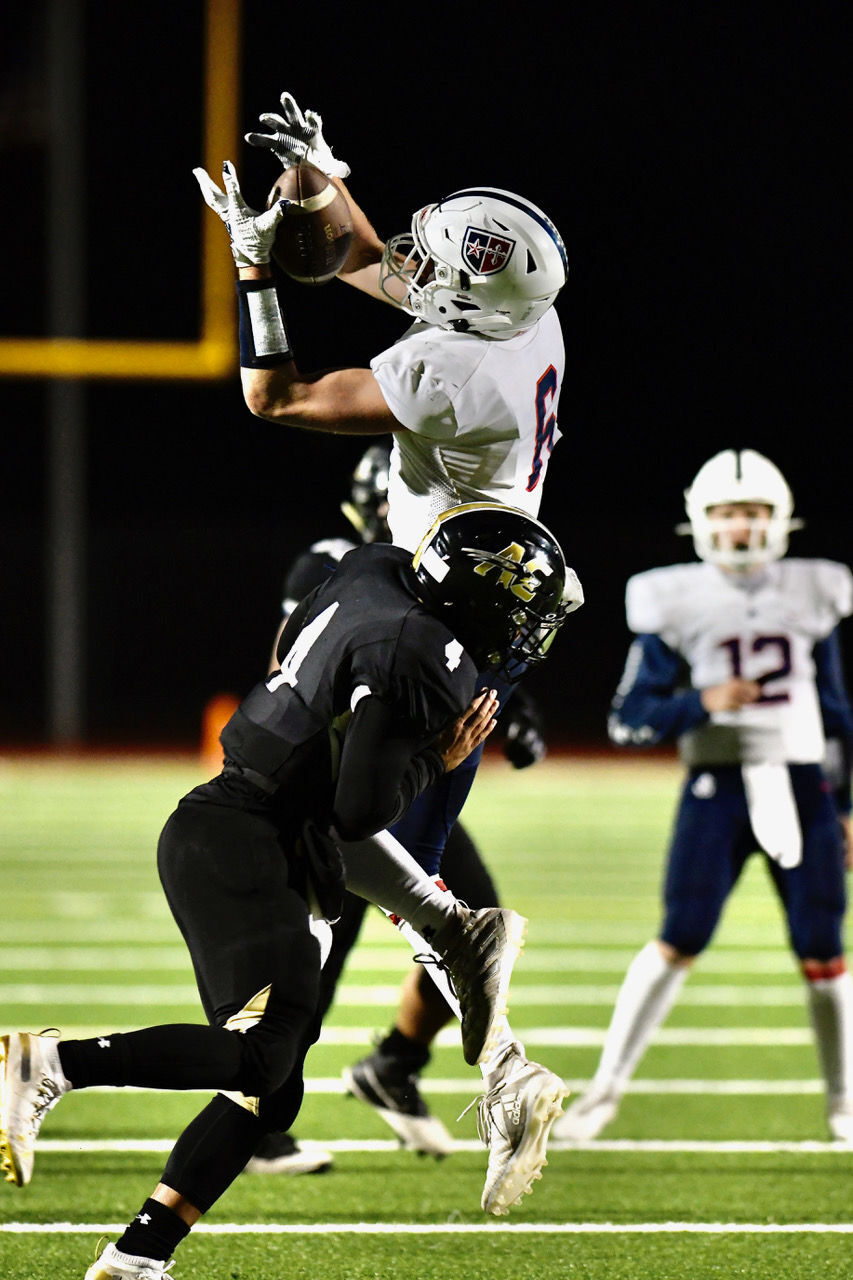 Justin-Siena's Josh Tichy makes a tough catch near the end zone while getting tackled by American Canyon's Vinnie Espejo on Friday night. 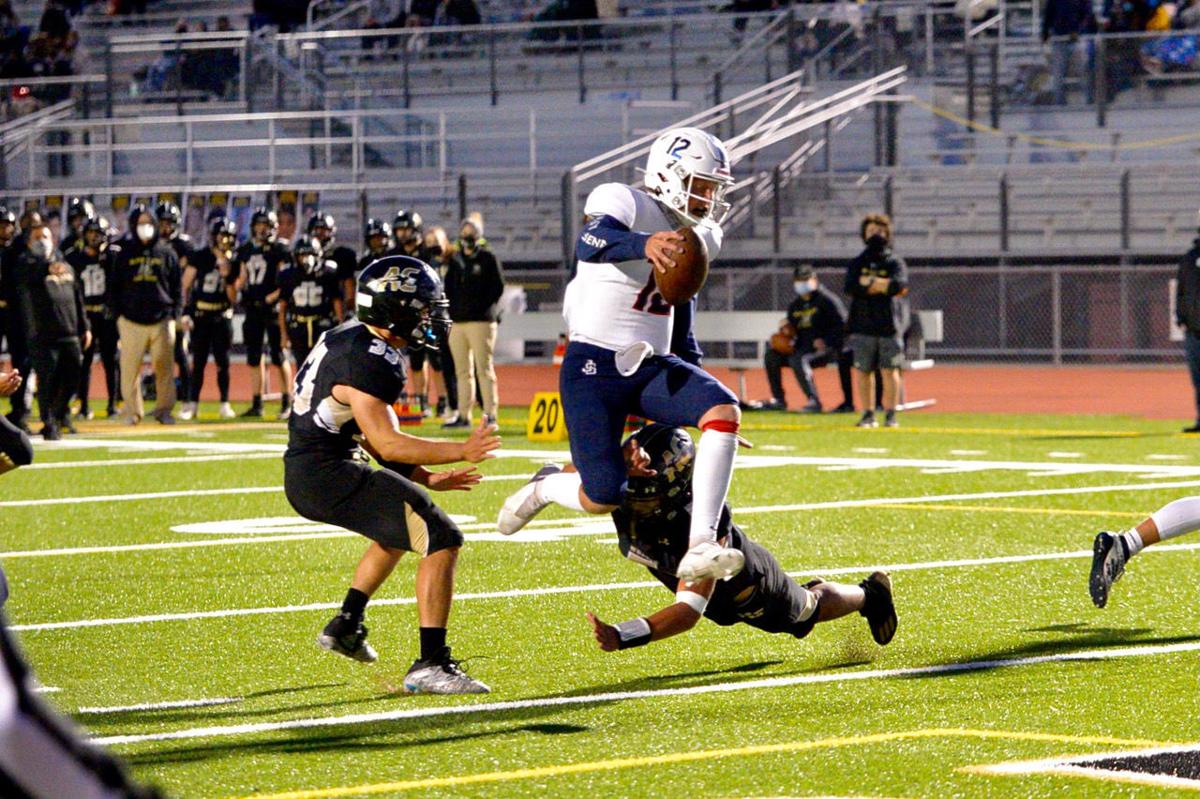 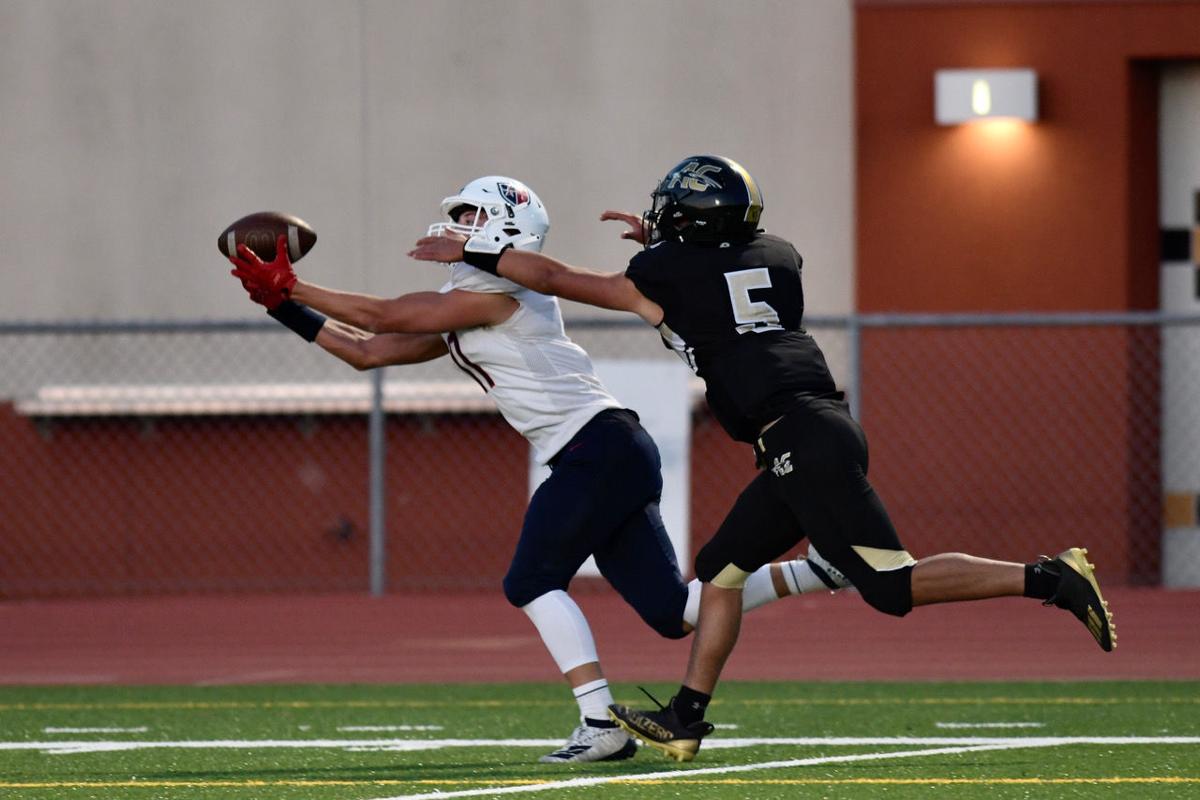 Justin-Siena's Miles Martin makes a finger-tip catch for a touchdown in front of American Canyon's Kaleb Anderson on Friday night. 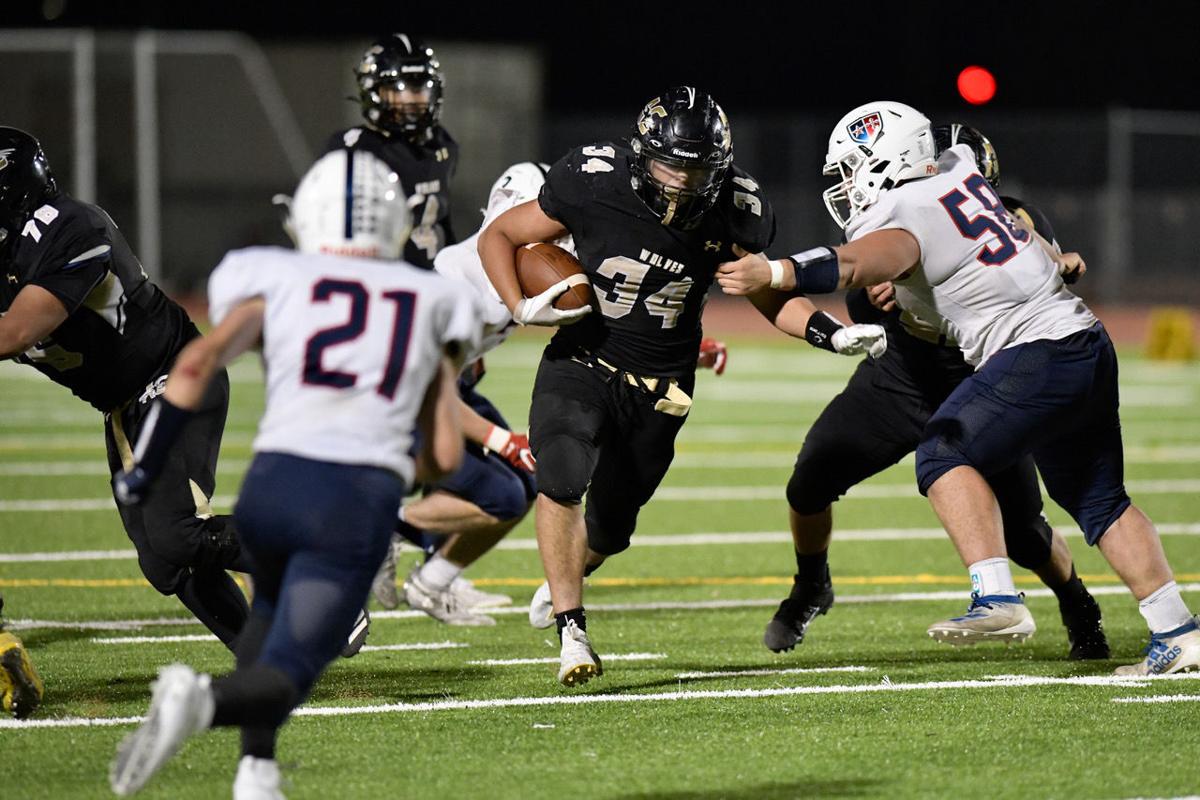 American Canyon's Ezekiel Anderson tries to get past Justin-Siena's Angel Garcia (58) as the Braves' Caden Parlett (21) closes in Friday night. 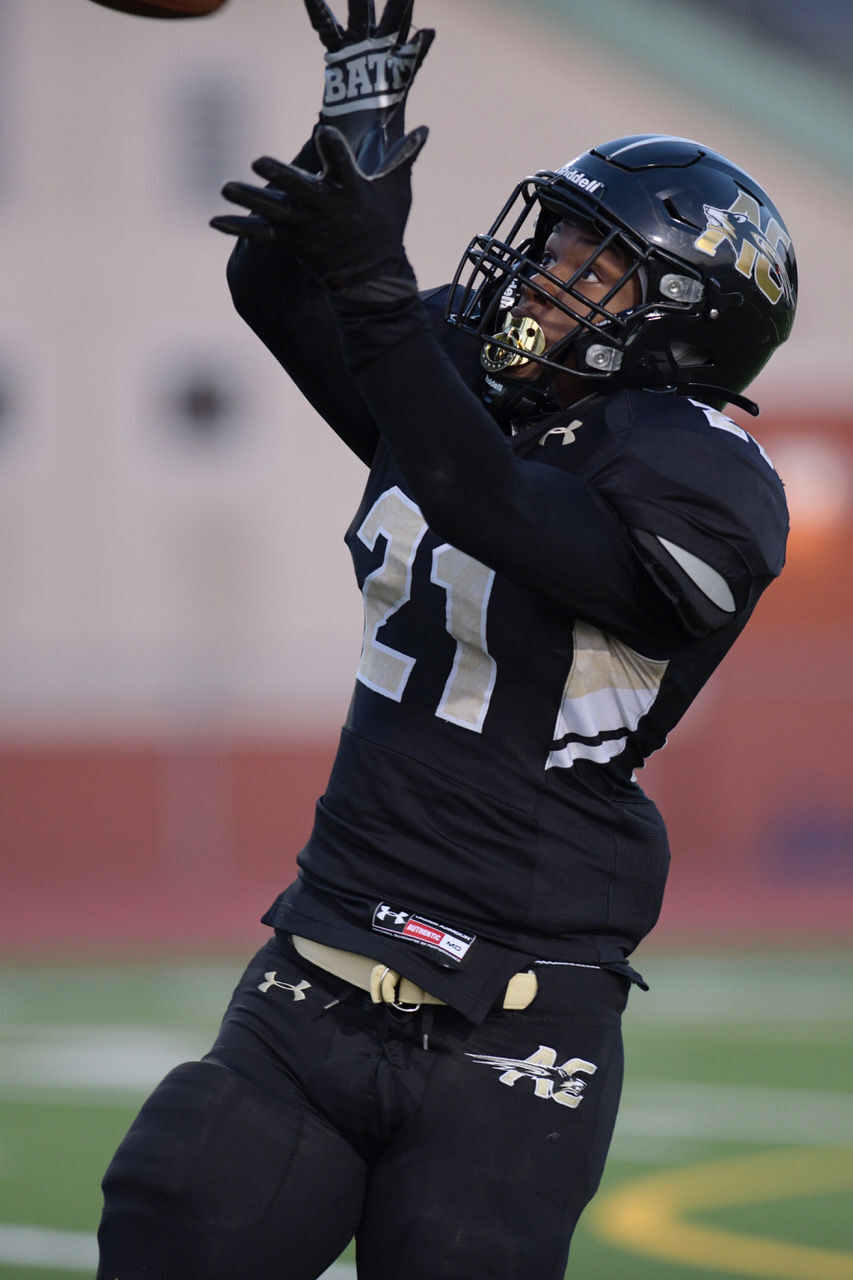 American Canyon's Jordan Fisher catches a halfback pass thrown by Ezekiel Anderson for a 42-yard scoring play in the first half against Justin-Siena on Friday night. 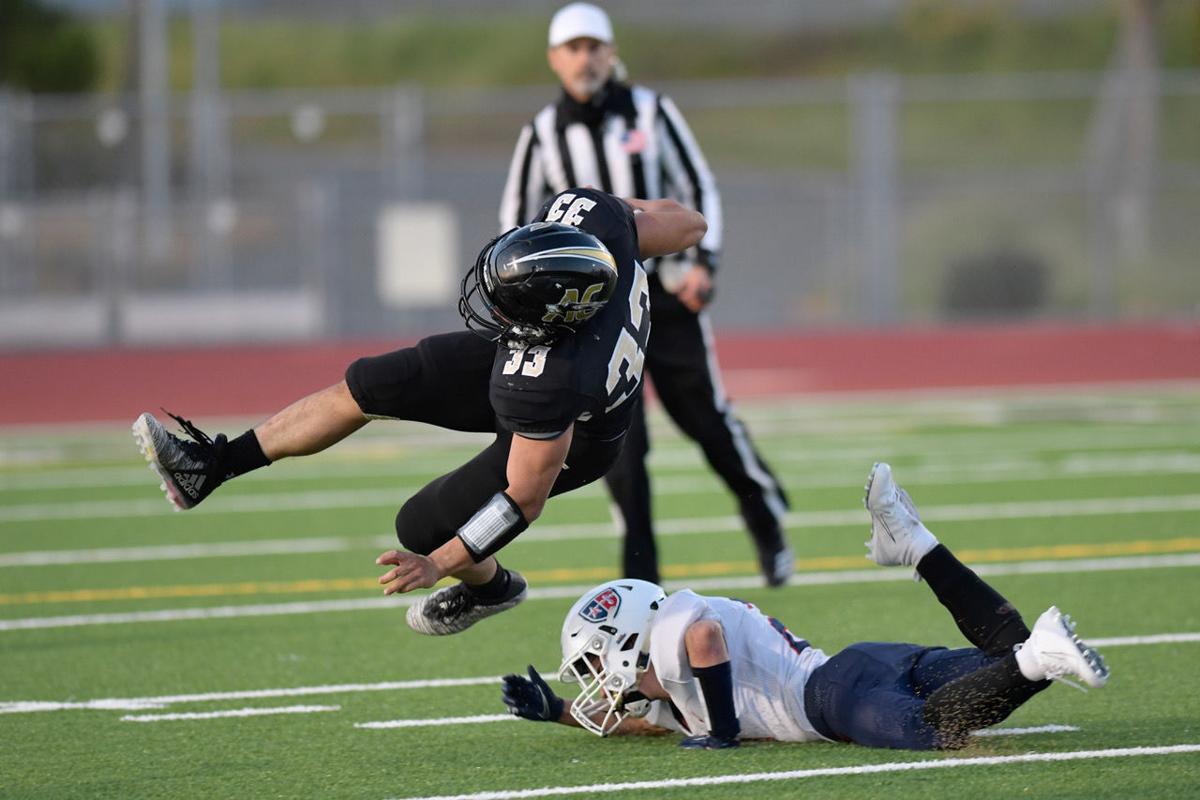 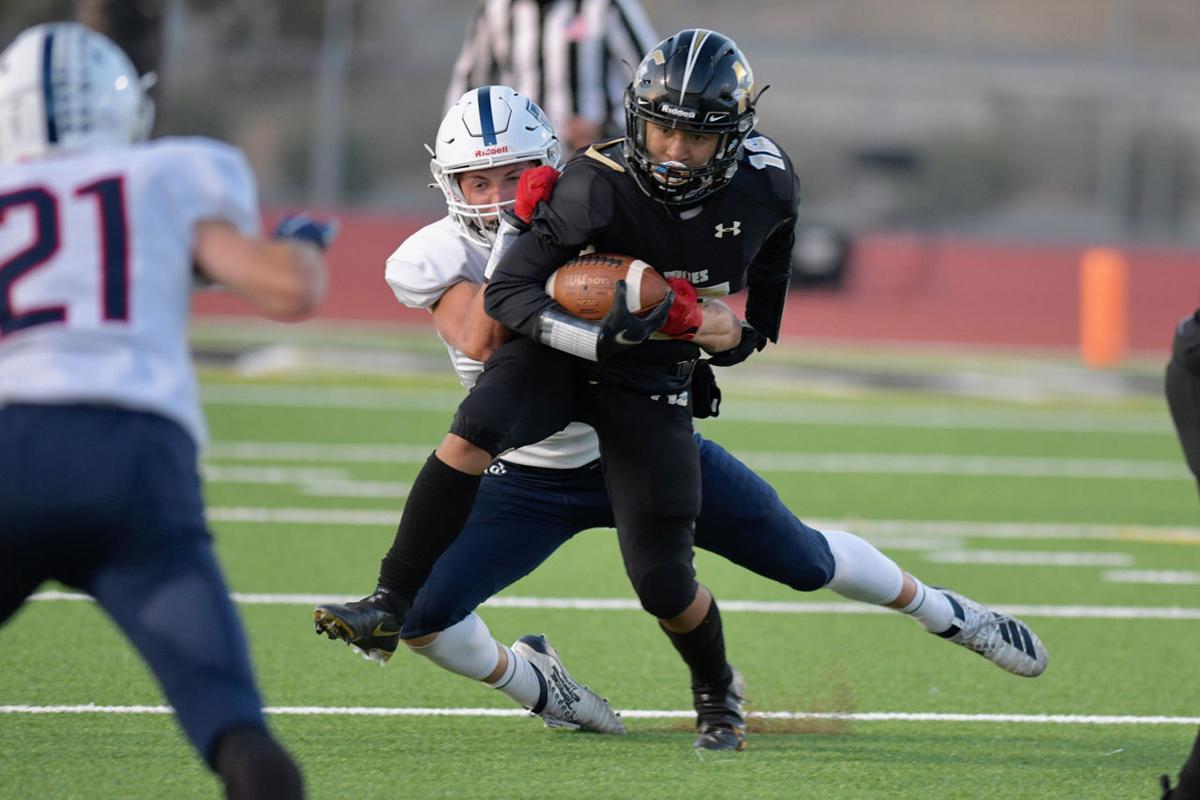 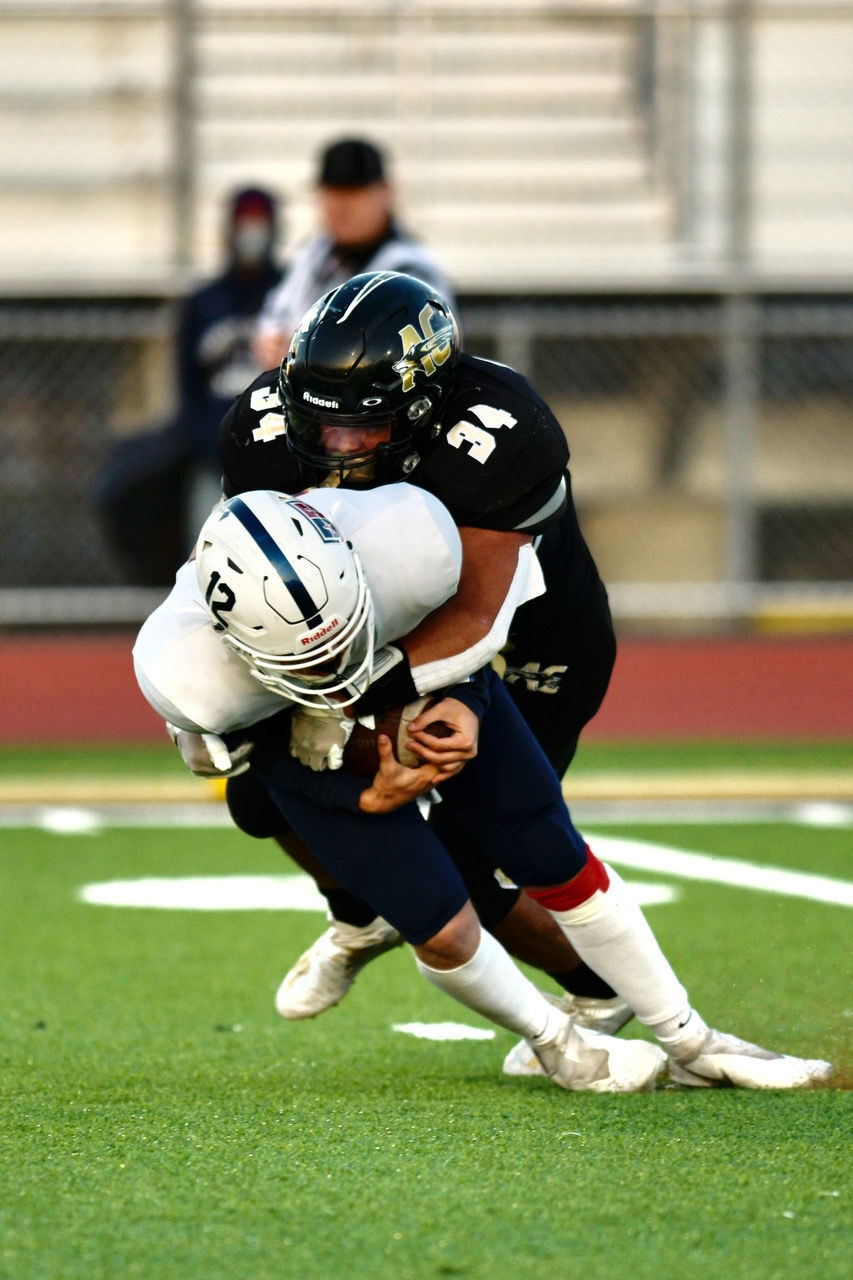 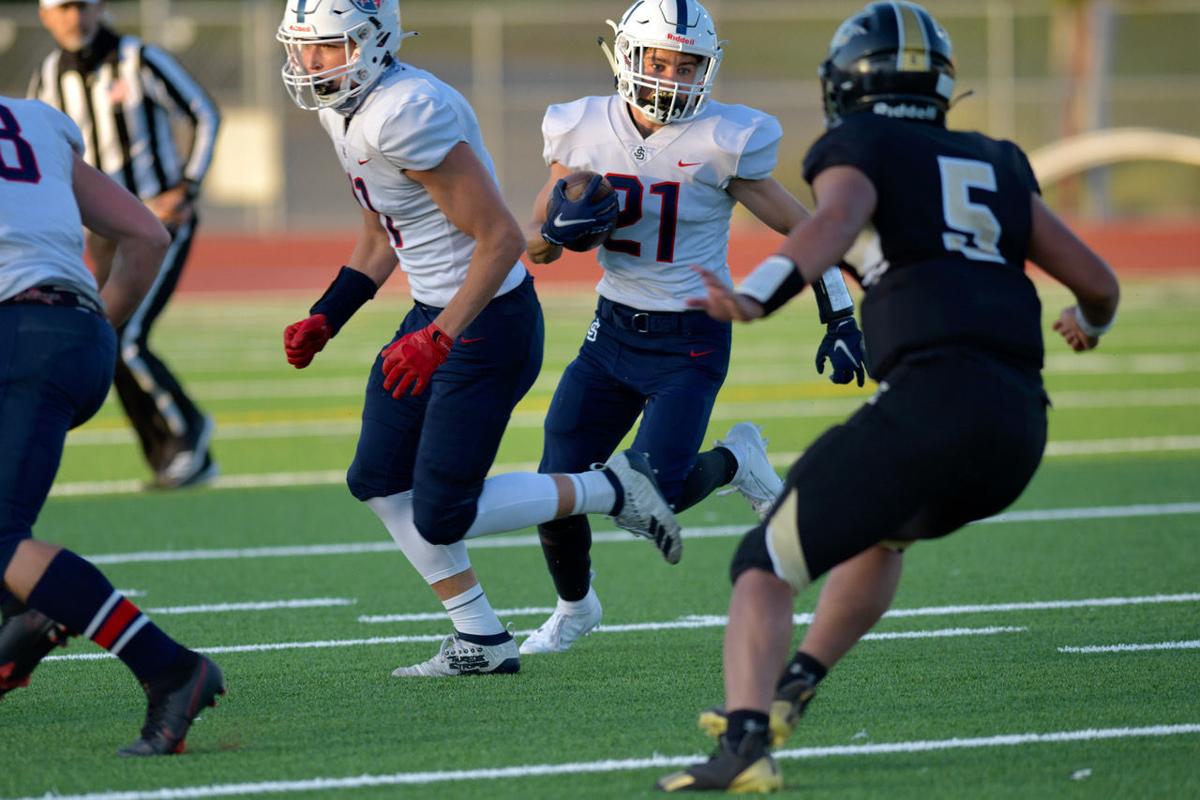 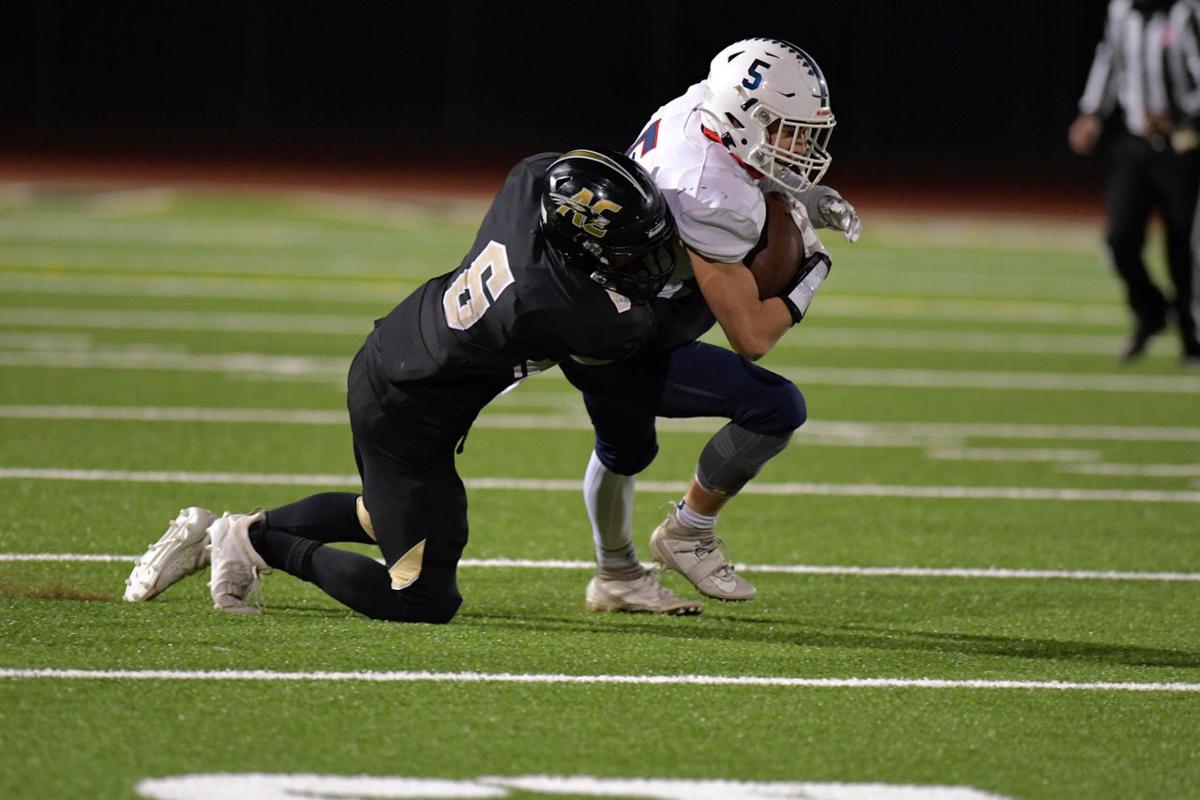 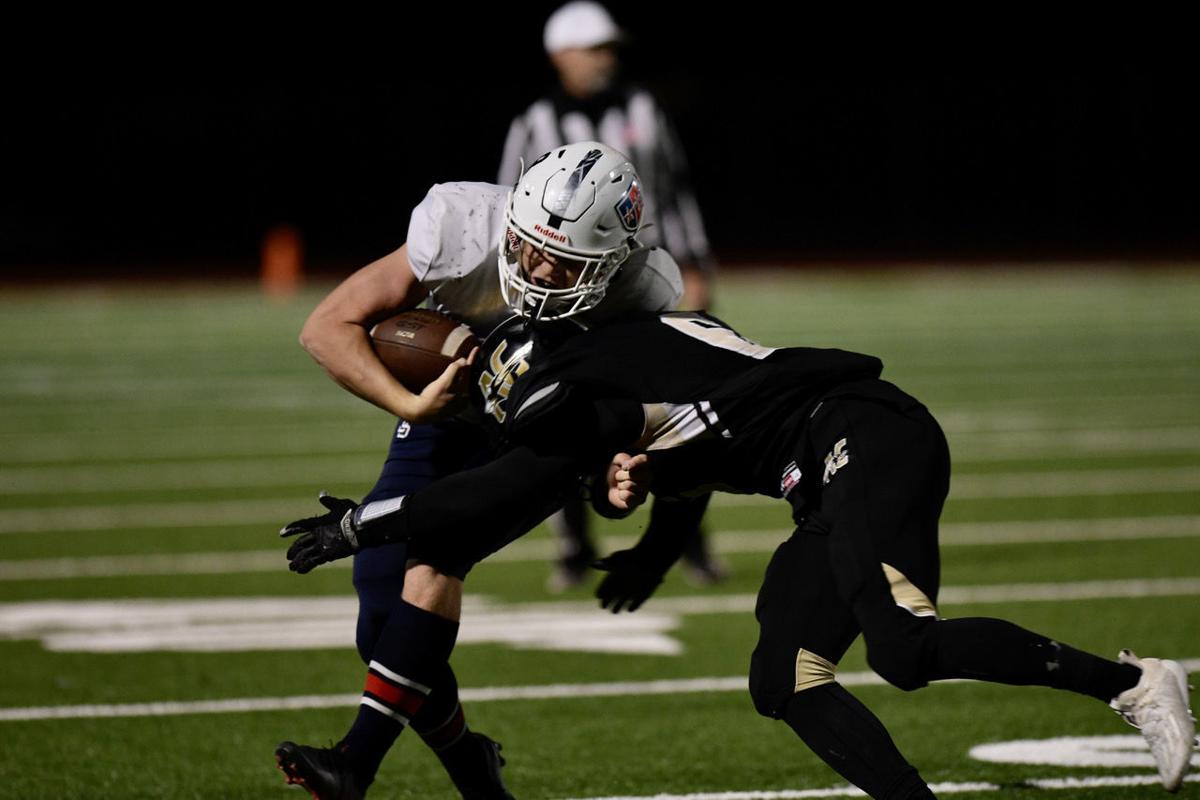 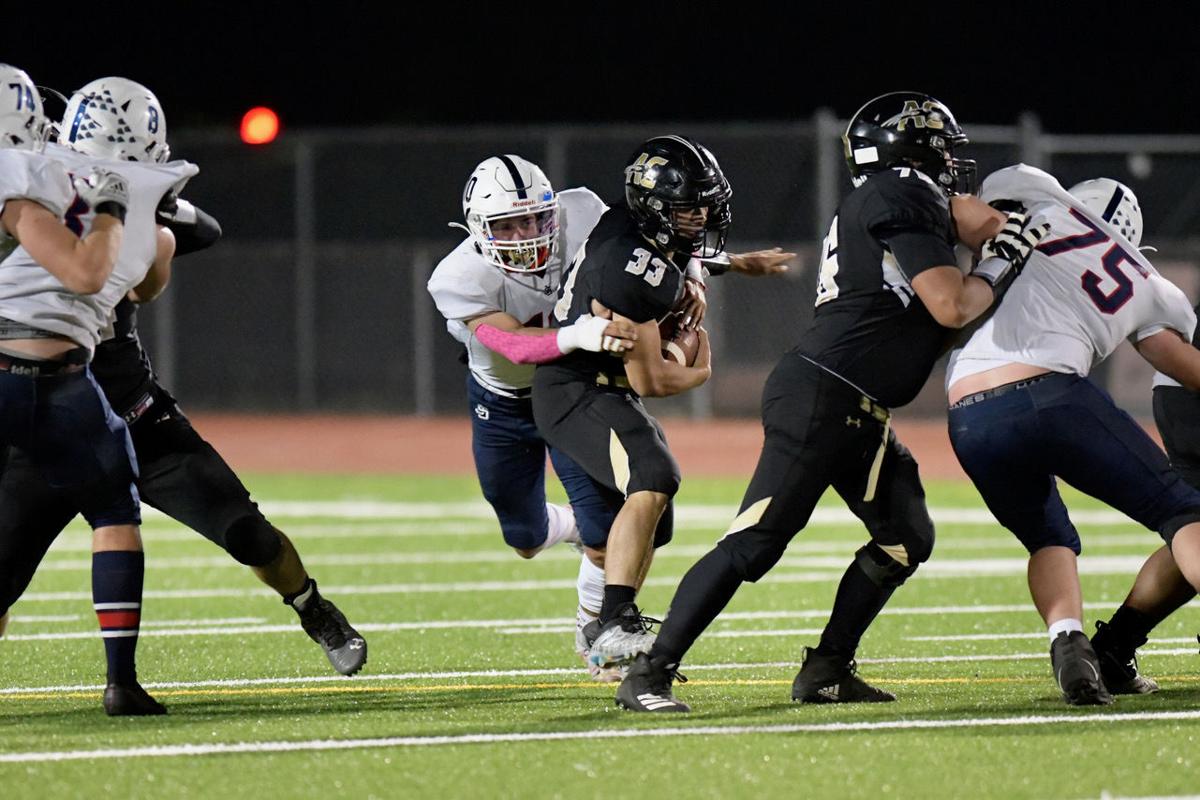 AMERICAN CANYON — With the chaos and uncertainty of the past year, it should have come as no surprise that the last game of the Napa Valley football season would be the wildest in many years.

From potential game-clinching interception returns, fake-punt attempts and many lead changes to two-star running backs slugging it out in a metaphorical heavyweight title boxing match and multiple halfback passes, Friday evening’s game was a grande finale for the 2021 spring football season.

American Canyon held on for a 50-42 Vine Valley Athletic League victory over Justin-Siena on Senior Night at Wolf Den Stadium.

“It was an absolute classic. Everything you could have wished for was there tonight,” American Canyon senior captain Ezekiel Anderson said. “To end it on a high note this year and especially for the seniors, I think this was the ultimate game you dream of and the way you want to end it. So I think it couldn’t have gone any better and we couldn’t have asked for anything else for our final high school game.”

The game featured seven lead changes and the victory was never certain until deep in the fourth quarter, when senior Mason Brodit jumped on a Justin-Siena onside kick attempt with one minute left and Anderson used two power rushes to achieve the game-ending first down for the Wolves (3-2 VVAL and overall).

“I'm proud of our guys. This game had everything. I just am so proud of everything that they dealt with — not just this year, but as a class (over four years),” American Canyon head coach John Montante said. “From the fires and just, man, this past year, they've been through so much. This season is going to be with them forever, and it's going to be in so many ways a transformative experience that takes these boys and turns them into men. I mean, this was a wild one and I'm proud of their fight and resilience.”

Added Wolves senior Camren Lee, “This group we've had to be tough mentally. This has been the most fun experience in my high school career, just grinding with these guys and facing adversity. Not every game has gone the way that we wanted it to, but just sticking it through and just finally being able to get to play — that has been the best experience.”

Justin-Siena (2-3 VVAL, 3-3 overall) never quit, even when the Braves fell behind by 15 points twice in the second half. Fighting through injury after injury and a cold wind, the Braves battled to the final horn.

“These are my brothers. I’ve been playing with them for four years and it’s tough to see it end so fast,” Justin-Siena senior lineman Angel Garcia said. “With these six games we wanted to prove ourselves in this league and it’s tough coming up short like this. Just seeing my brothers down like this kills me. It’s not the best feeling. But knowing that we left it all out on the field, we have nothing to regret.”

Noah Young continued to showcase why he is one of the top athletes in the Napa Valley, as the senior had the Wolf Den announcer calling his name on every other play on both sides of the ball. The running back had a team-high 124 rushing yards on 25 carries and found the end zone three times. The multi-sport athlete was also key on defense in trying to stop the powerful running game of the Wolves.

“Noah is a special kid. He’s got all the physical tools, He’s big, he’s fast, he’s strong, he’s aggressive, but he also understands things really well, too — which I appreciate about him,” Justin-Siena head coach Brandon LaRocco said. “He doesn't always like to let people know this, but actually he is really, really smart. When you see Noah you see the big, the strong, the fast, but people really don’t understand how intellectual this kid can be and how he understands the game. The way he preps and studies leads to a lot of success on the field.”

Anderson and Young battled back and forth, as both star players clashed with each other on what seemed like every drive of the game. Both two-way players left everything out on the field, each lining up at both linebacker and running back. Anderson finished with a game-high 151 yards on 20 carries and scored twice.

“Man, he is a big back for sure. He’s a great running back. I had to go face-to-face with him when I was playing linebacker and he’s a bruiser,” Anderson said of Young. “He is a big dude and he ran hard tonight. I have nothing but respect for that guy. He played his tail off.”

With less than three minutes remaining in the contest, American Canyon had the ball and looked to put away the Braves. Up seven points, the Wolves went with some trickery.

Anderson caught a shovel pass and hurled the ball downfield to an awaiting Jordan Fisher. The duo had connected earlier during the game on the same trick play for a 42-yard touchdown. It was close to happening again. But this time, after Fisher made the catch, the Braves defense forced a fumble and Seth Morrison jumped on the ball.

“I was really proud of Seth Morrison,” LaRocco said. “His hip got banged up pretty bad during the game but he was like, ‘I'm not coming out of this game. There's six minutes left in my football career and I'm playing this game.’ They’re all like that. It's just one specific example, but that mentality, the way they approach this game, I just love that mentality and I respect that.”

Justin-Siena quickly marched downfield after the fumble recovery. Senior quarterback Hudson Beers completed a 10-yard pass and a few more shorter ones, looking for the tying score. The Braves were on the Wolves’ side of the 50 and seemed to be finally hitting their stride after a rocky third quarter. A holding penalty pushed them back to near midfield and had them facing third down and 20. Beers looked to his right side and fired off a hard-thrown pass. Sophomore defensive lineman Jacob Aken smacked the ball into the air and senior linebacker Drake Hundley nabbed it and returned the interception 50 yards for what proved to be the winning touchdown.

“I am crazy proud of the way these guys fought until the very end, even with two minutes left and down by 15 points,” added LaRocco. “We still gave ourselves a shot to go for an onside kick and then have a chance to try and win the game. We can’t ask for any more than that.

“I told the guys, ‘Look, whatever happens, stay together and battle for four quarters and leave it all on the field. It’s the last chance that we get to be a team together and give everything you got.’ They did that and I am very proud.”

Justin-Siena's Josh Tichy makes a tough catch near the end zone while getting tackled by American Canyon's Vinnie Espejo on Friday night.

Justin-Siena's Miles Martin makes a finger-tip catch for a touchdown in front of American Canyon's Kaleb Anderson on Friday night.

American Canyon's Ezekiel Anderson tries to get past Justin-Siena's Angel Garcia (58) as the Braves' Caden Parlett (21) closes in Friday night.

American Canyon's Jordan Fisher catches a halfback pass thrown by Ezekiel Anderson for a 42-yard scoring play in the first half against Justin-Siena on Friday night.