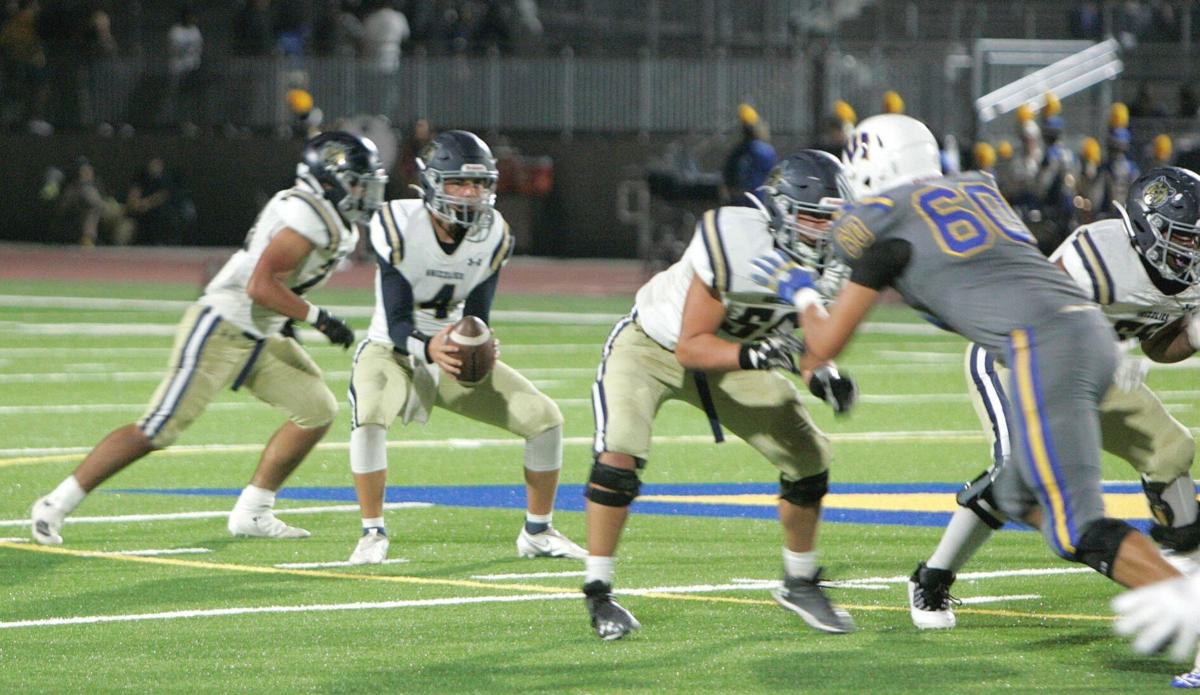 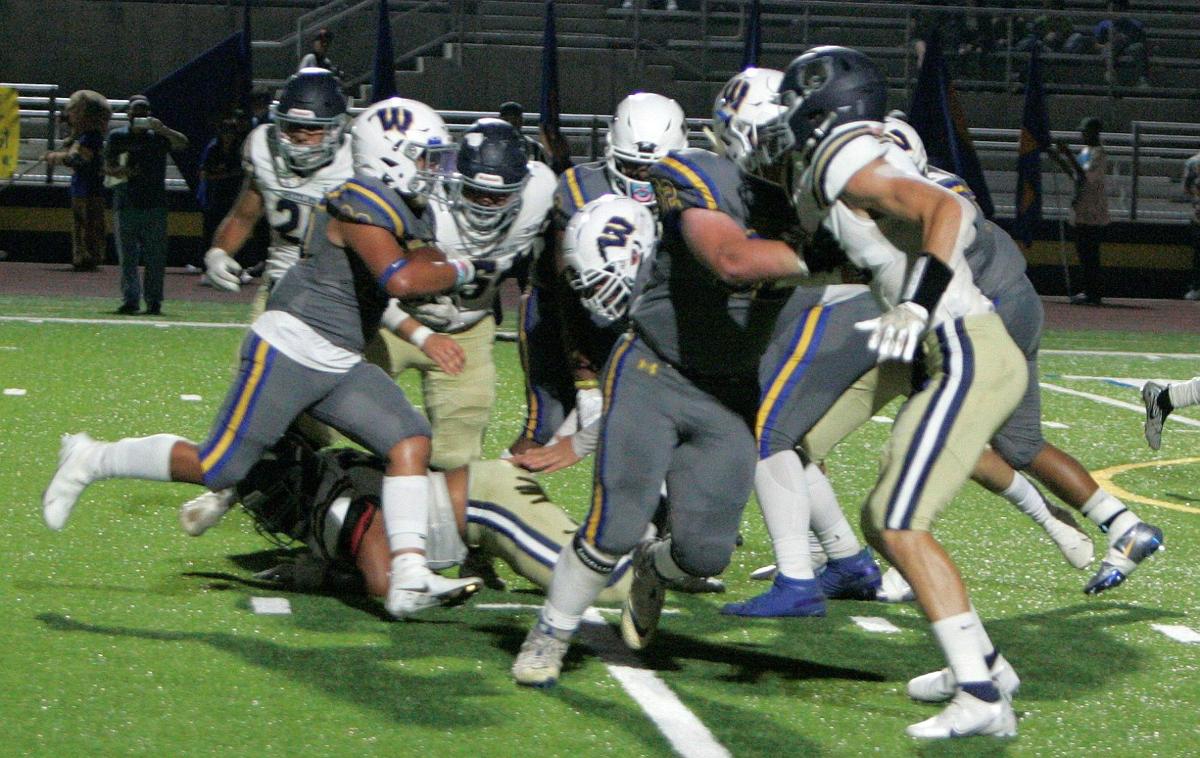 Chalk up the missed tackles to the Grizzlies’ lack of experience, not only from having to open their season against a Wood team with two games already under its belt but also being flat-out football rookies.

Senior quarterback Baxter Ken Tilford rushed for 152 yards and two touchdowns and senior running back Jayjay Olaes ran for 145 yards and two more TDs as Wood turned a few potential tackles for losses into big plays in a 34-14 nonleague win over the young Grizzlies on Friday night.

“For a lot of our kids, this was their first football action, ever—no Pop Warner, no nothing,” said Napa head coach Askari Adams, who is also the defensive coordinator. “It’s no excuse, but it’s what we’re dealing with right now. It’s hard for those kids. I couldn’t imagine coming out here in my junior year or my senior year having not ever played football and, ‘Boom, here you go. Play.’ If this was October, I’d be like ‘What the hell’s going on,’ but it’s not and I know we’ll improve every week.”

Still, no D-coordinator likes to have two 100-yard rushers in one game on his watch.

“It was not what I was expecting,” he said. “You best believe we’ll be tackling this week. We need to do a lot more of that. But it is what it is — first-game jitters, a lot of new players.”

The Wildcats (2-1) have not only a couple of burners but a pretty impressive booter, as well, in kicker Krishna Clay. The senior captain threaded a 40-yard field goal early in the second period and an NFL-distance 52-yarder as time ran out in the first half.

The longer one killed any momentum Napa may have achieved by getting on the board with a 23-yard touchdown pass from junior quarterback Anthony “Kiwi” Tubridy to senior Christoph Horton. With his team’s lead cut to 17-7, Tilford scampered 22 yards to midfield as time ran out. But Napa was penalized for bringing him down by his jersey neck hole, known as a horse collar tackle. Since a half can’t end on a defensive penalty, just enough time was put back on the clock for Clay to drill his mega-kick and snatch the halftime momentum.

The game had started, ironically, with Napa’s sure-footed extra point kicker Oscar Sotelo getting a shot at a 40-yard field goal after defensive end Thomas Hatton recovered a fumbled exchange on Wood’s first play from scrimmage. But it was low and wide, perhaps deflected, and the Wildcats followed with five-play drive capped by a 52-yard scoring jaunt in which Tilford broke at least two tackles. After Clay’s 40-yard field goal, Tilford broke off a 31-yard scoring scamper to make it 17-0 with five minutes left in the half.

Tubridy (11 for 30, 172 yards) helped get Napa on the board by taking the focus off New Mexico commit Horton, by finding Yovanni “Yo Yo” Palma for a 29-yard pickup. It was the third play of a nine-play march he would cap with a 23-yard scoring strike to Horton (five catches, 97 yards).

But Tubridy and Horton wouldn’t connect again until Olaes’ two long scoring runs had made it 34-7, and their 45-yarder would serve only to make the result more respectable.

“I didn’t even see him catch it because I’m not the tallest guy in the world,” Tubridy said. “I’m not the shortest, either, so I knew he was there. But I couldn’t see if the defender was right on him, so I just thought ‘my guy’s better than their guy’ and threw. Christoph’s catch radius is ginormous.

“We’ve got some ballers at receiver — Raul Castellanos, Zach Allen, Carlos Mata, Yo Yo — and if we can distribute them the ball it makes it easier on everybody — defense, special teams, offense, everybody. We have athletes all over our team. We just need to work on our preparation.”

To the Grizzlies and their coaches’ credit, they never stopped playing. After making it 34-14, they recovered an onside kick and forced Wood’s first punt. They drove back into Wood territory after each, only to throw incomplete on fourth down both times.

“I think this was a good opportunity for us to get better, learn from our mistakes,” Tubridy said. “As for our defense, they’ll work on it. We get after it in practice every day.”

“Kiwi did a pretty good job, Mata (22 carries, 91 yards) ran the ball hard, and Christoph made some nice catches. We just need the rest of the 11 to show up and get all 11 executing,” Adams said. “It just wasn’t happening tonight, but they played hard from start to finish and that’s what I like. As long as we’re still competing in the fourth quarter, I cannot be mad at them.”

The Grizzlies will host Rodriguez (2-0) this Friday night.

Head coach Johnny Pelfini said most of his JV Grizzlies also played their first games ever on Friday night and were hurt by turnovers in the shutout loss, but he gave the Wildcats (1-1) credit.

“Will C. Wood’s a great team, a big team, a very physical team, and they did a great job of controlling the line of scrimmage,” he said. “We made a lot of mental mistakes that turned into physical mistakes. We’re a really thin team — most of our guys are playing three ways — but we’ve got a good group of kids who really like football, so we’re excited to get back to work.”

“Liam had a great opening catch that went pretty far, maybe 60 yards, that set us up in good field position, but then we turned the ball over,” the coach said. “He’s our punter and, unfortunately, he punted a lot today, but he did a great job making things happen.

“Daniel got banged up early with a thigh contusion or something but he kept hobbling in and out all game, so he showed a lot of heart, which is promising,” the coach said. “He’s a tough kid and this is his second year. They both showed a lot of heart, and that’s what we can work with. We’re really excited to get back to the drawing board on Monday and get back to fundamental football.”