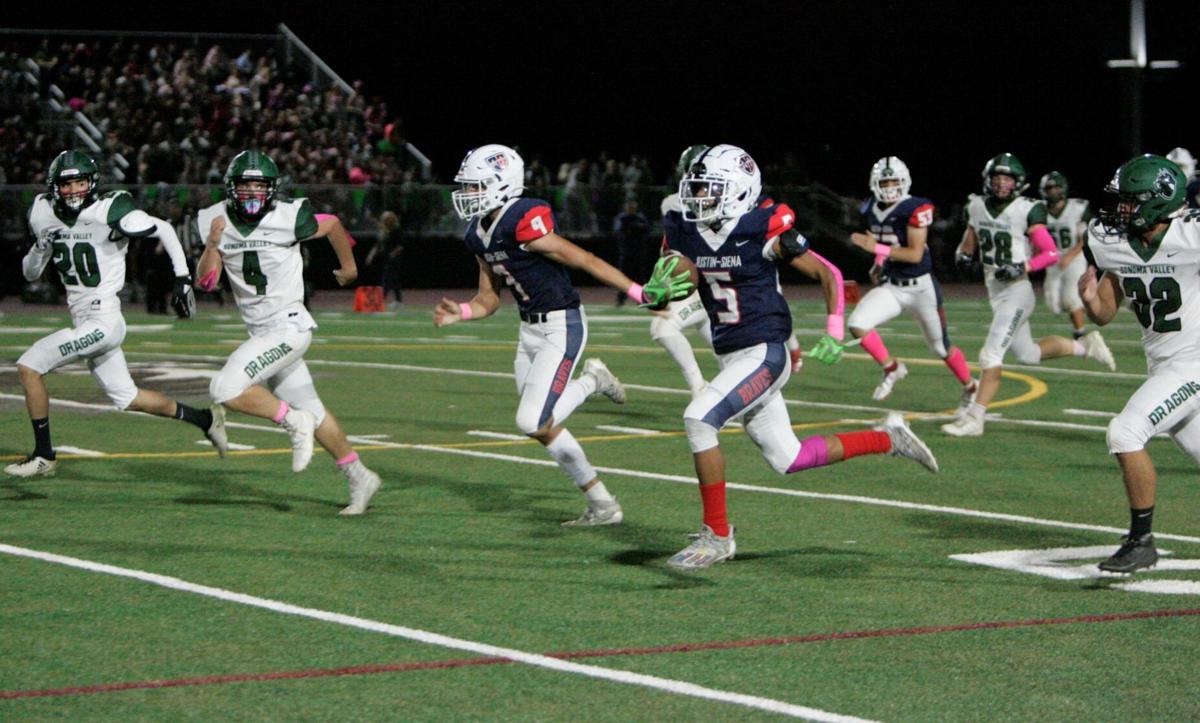 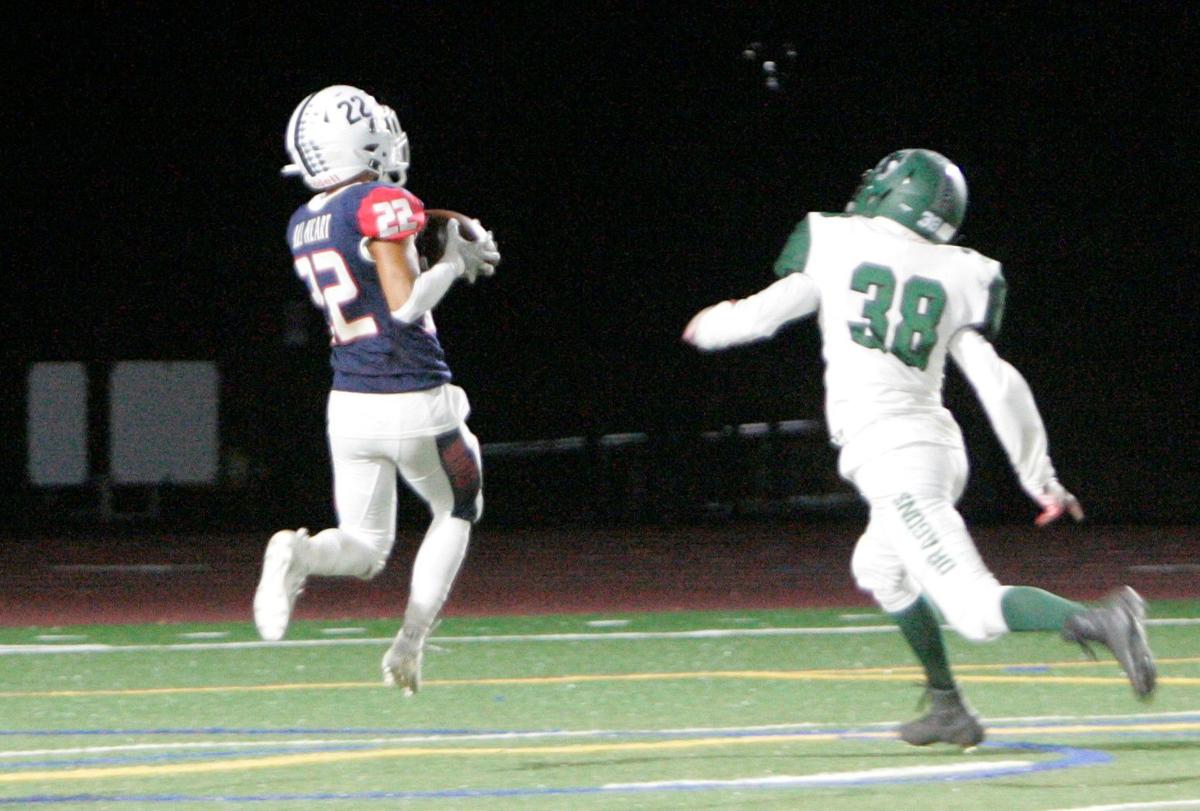 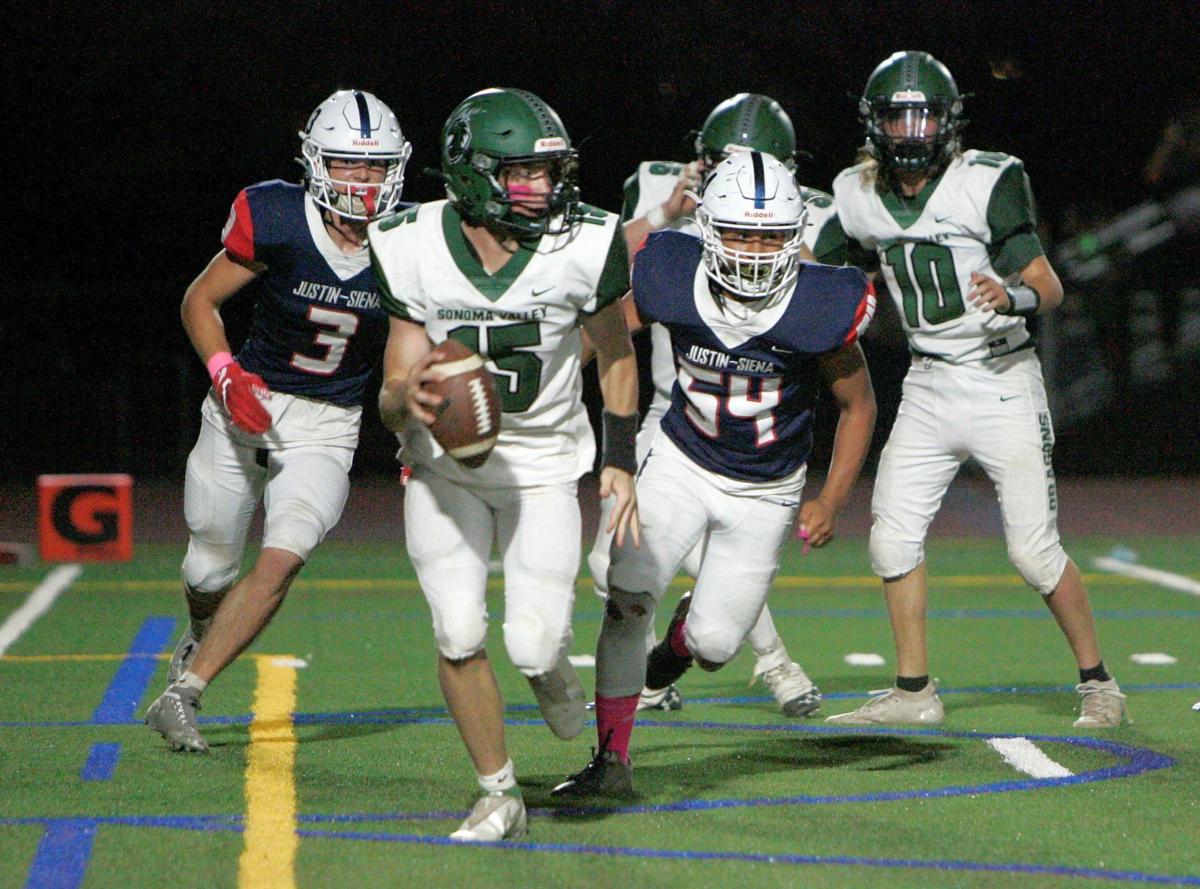 SONOMA — It may have been Homecoming for Justin-Siena’s opponent Friday night, but a few of the Braves call Sonoma home, too, making their game against Sonoma Valley feel like one for bragging rights.

Being the two smallest schools in the Vine Valley Athletic League makes them feel like rivals, too.

After a first half that’s sure to make him wince when the Braves review the game on film, Justin-Siena senior quarterback Zach Zurowski overcame whatever nervousness or excitement was distracting him early on by putting on a dual-threat clinic in the second half of a 35-7 rout.

Zurowski ran 11 times for 66 yards and a long touchdown, despite losing 31 yards on two fumbles he had to fall on. But he was a crisp 6 of 13 through the air for 129 yards and two more long scoring strikes.

“We knew we were capable of scoring more,” Zurowski said. “We knew we had to step it up in the second half. I trusted the guys in front blocking for me.”

The Braves’ defense forced Sonoma Valley three-and-out to open the game, but their offense sputtered with a holding penalty on the first play. Zurowski then lost the handle on a shotgun snap and the Dragons recovered at the Justin-Siena 25-yard line.

Two plays later, Trevor L’Esperance grabbed the first of his two interceptions. A regrouped offense cashed in seven plays later, when Caden Parlett’s fifth carry of the drive took him into the end zone from 4 yards out. Cesar Evina began a 5 of 5 night on extra points to give the Braves a 7-0 lead midway through the quarter.

The Braves began their next drive as the second quarter started and, after hitting Miles Martin with a 12-yard completion, Zurowski watched a shotgun snap sail over his head. He recovered it, but not before losing 21 yards. Four plays later, three-phase standout Martin set up another Braves scoring drive by recovering a fumbled punt at the Sonoma Valley 6.

Three plays later, Roman Williams burst in from the 2 and the Braves had a 14-0 lead.

The Dragons matched Justin-Siena’s intensity on defense after that but couldn’t get a push on offense because of penalties, and the Braves’ staunch run and pass defense. They had one first down in the first 1½ quarters, on a 21-yard run by Spencer Jacobs. Coming after a kickoff return to the Braves’ 45, it helped set up a 35-yard field goal attempt, but the kick sailed wide. With 6:29 left in the half, however, Tate Baker hauled in a well-thrown 34-yard scoring strike from sophomore quarterback Trent Ohman to cut Justin-Siena’s lead to 14-7.

The Braves’ Josiyah Maddalone got the momentum back briefly by returning the ensuing kickoff about 65 yards to the Sonoma Valley 16. But the Dragons, backed into their red zone, pulled off an impressive three-and-out.

With the stands on its side of the school’s brand new field packed with vocal fans, Sonoma Valley looked determined to tie the score or take the lead before the long homecoming halftime. The speedy Ohman was sacked by Brandon Guiducci and Giancarlo Guerrero on the first play. But the march would last 14 plays, including first downs on a defensive pass-interference call, a 22-yard keeper by Ohman, and Baker’s 11-yard catch-and-run to the Braves’ 10. Martin pushed Baker out of bounds at the 7 after his third catch of the drive. But on fourth down, Eric Gutierrez broke up a pass in the end zone with 14 seconds left to keep the Braves on top.

After each team went three-and-out to start the second half, Zurowski and Co. quieted the home crowd with three straight scoring drives. The first lasted one play — a 55-yard dart to Sangiacomo, one of the Braves’ Sonoma County residents, to make it 21-7.

“We got riled up 100% by our Sonoma guys before the game,” Zurowski said.

A Nick Andrews sack led to another Sonoma Valley three-and-out.

Two plays after Maddalone had an apparent 77-yard touchdown punt return nullified by a penalty but still got the Braves in Dragons territory, Zurowski fired a 33-yard scoring pass to Gutierrez.

“Eric is a two-way starter who also had a good game at cornerback,” LaRocco said.

The Dragons followed with an 11-play possession, but ran out of downs at the Justin-Siena 24 thanks to a sack by Sonoma resident Gianni Natuzzi. Three plays later, Zurowski faked a handoff to Emrys Davies and — much like speedy Baltimore Ravens Lamar Jackson — juked his way toward the Sonoma Valley sideline, turned the corner and took it to the house from 62 yards away for a 35-7 lead with 5 seconds left in the third quarter.

“That’s probably the best half of offense we’ve played all season,” LaRocco said. “We have more returners on the defensive side, with gifted linebackers like Cole (Chatagnier), Robby, Nick and Brandon, and we knew it would take time for the offensive to catch up.”

For Justin-Siena, the scoreless fourth quarter was highlighted by sacks from Giancarlo Capponi and Williams and the second pick of the night for L’Esperance. He helped limit Ohman to 9 of 27 passing for 88 yards. The Braves sacked him six times.

“We’re the smallest team in the league, the one team everybody thinks they can beat, so I knew it would be a dogfight,” LaRocco said.

Justin-Siena now prepares to host Napa (0-5), which lost 55-33 in its VVAL opener at American Canyon on Friday night. The Grizzlies’ 33 points nearly doubled the 38 they had scored in their other four games combined.

“Napa doesn’t play like an 0-5 team,” said LaRocco. “They have a good defense and their offense is coming together.”

The Braves fell to 3-3 overall and 1-1 in the VVAL with Friday night’s loss to the Dragons (5-1, 1-1 VVAL), who scored on the first possession of the game and never looked back.

“Sonoma controlled the game most of the night,” said Justin-Siena head coach Spencer Joske. “They brought a strong running game tonight and we struggled to find an answer.”

Sonoma Valley held Justin-Siena to 130 yards in the air and 55 on the ground. Logwood led the running game with 11 carries for 53 yards and a touchdown. The passing game was contained to Gray (4 catches, 47 yards, touchdown) and Benedetto Sebastiani (4 catches, 42 yards).

“We were down the entire game, but our guys never gave up. They kept fighting to the end,” Joske said. “We will take this game as a learning experience and use it to improve for next week against Napa.”