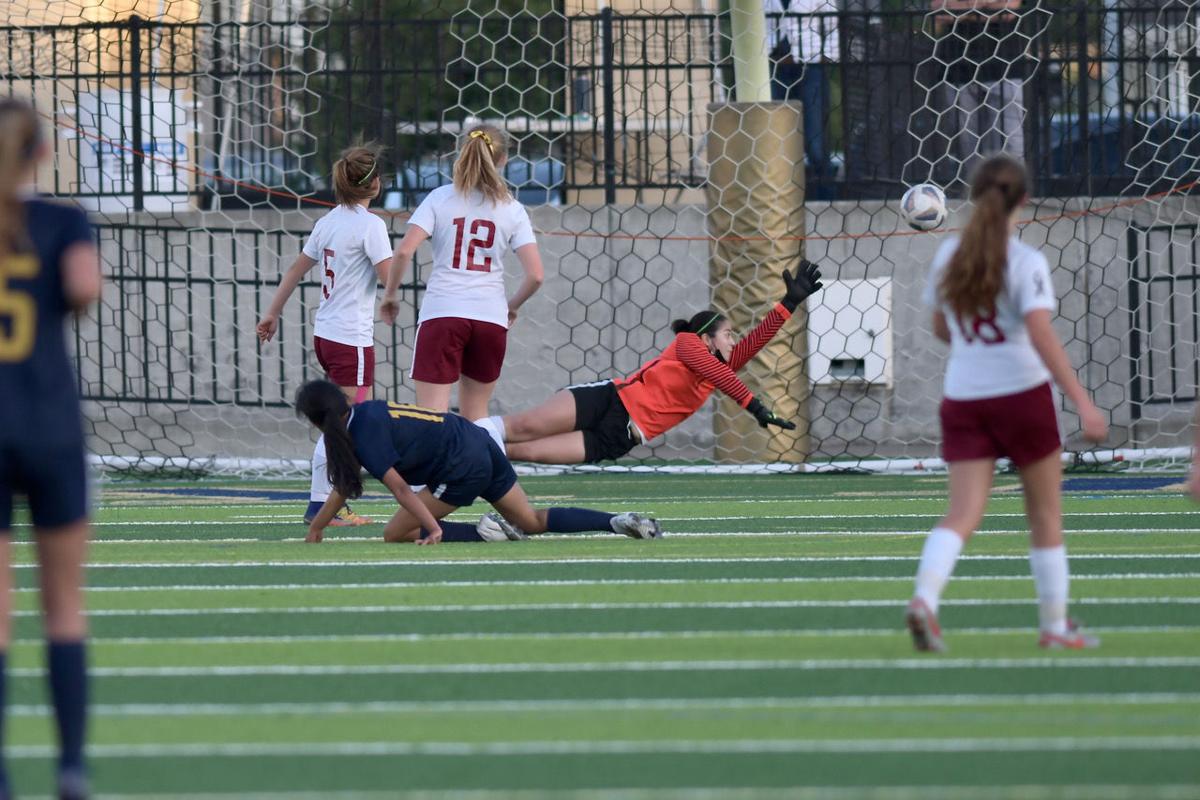 Napa High junior Ariana Del Rosario, on ground, watches her shot get past a diving Vintage senior goalkeeper Carla Magana for a 2-0 lead. 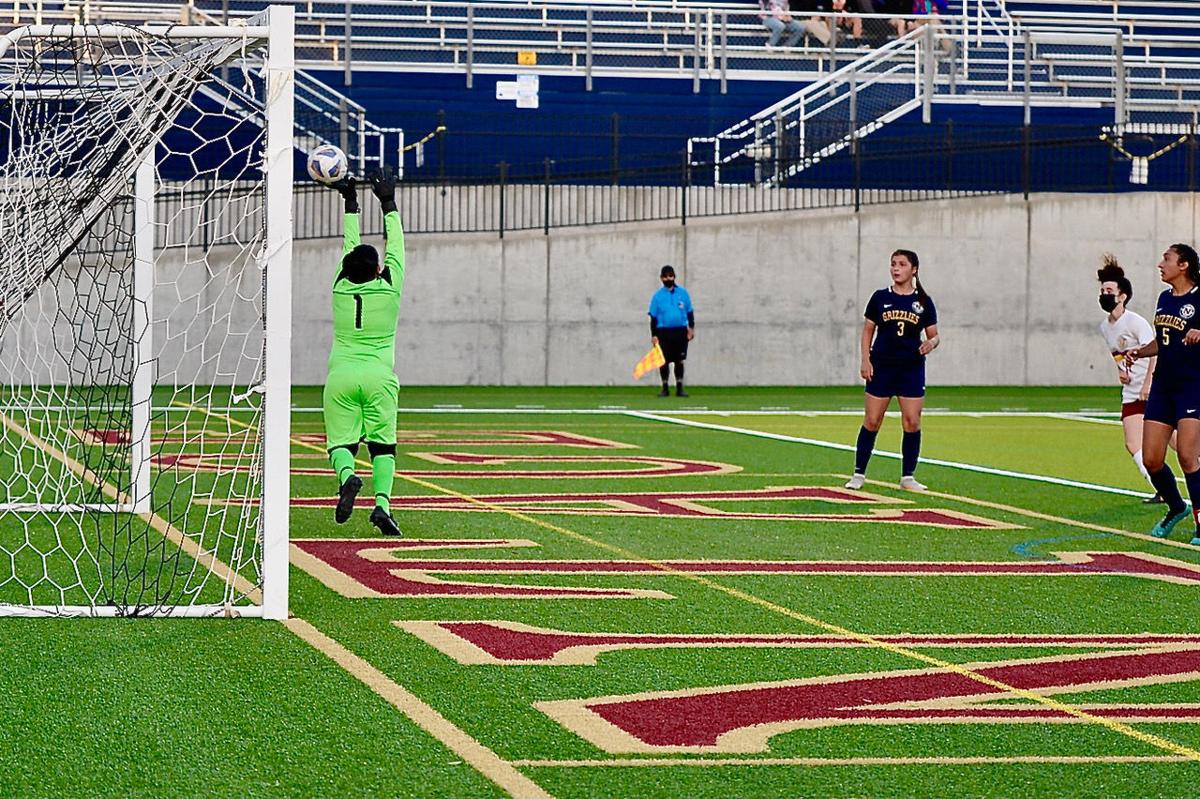 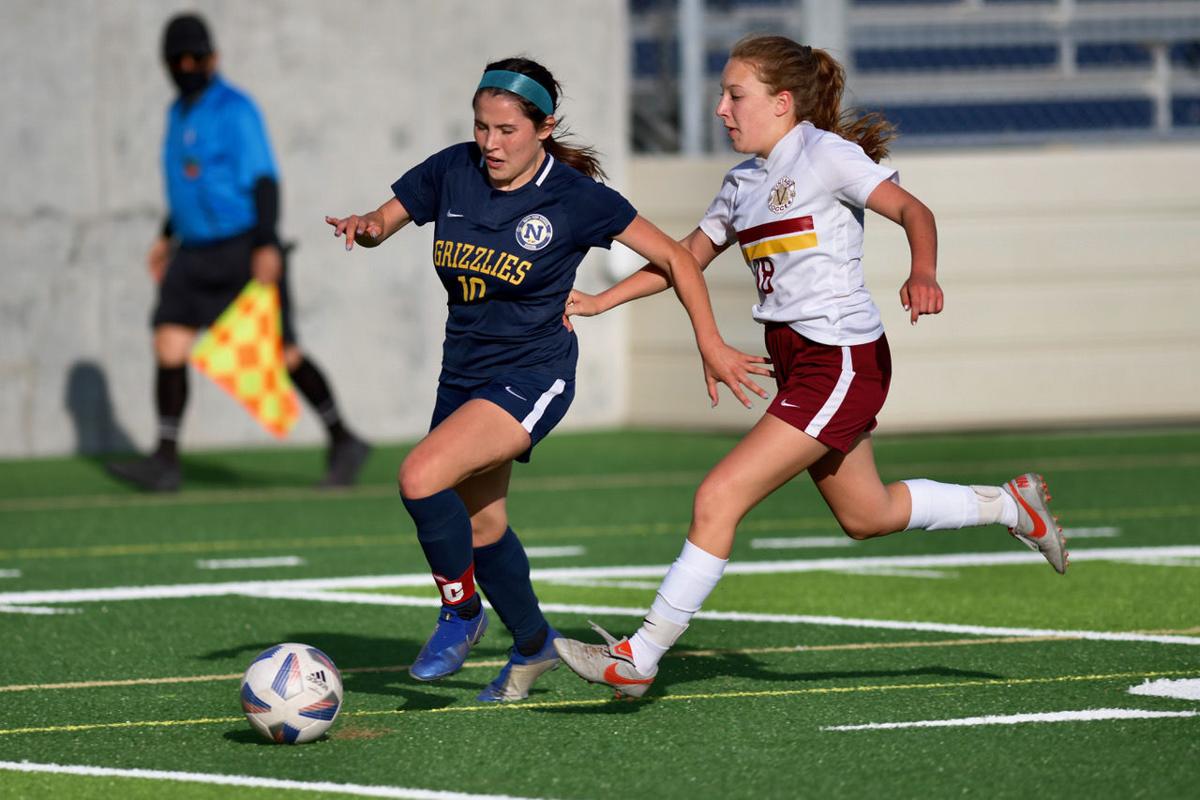 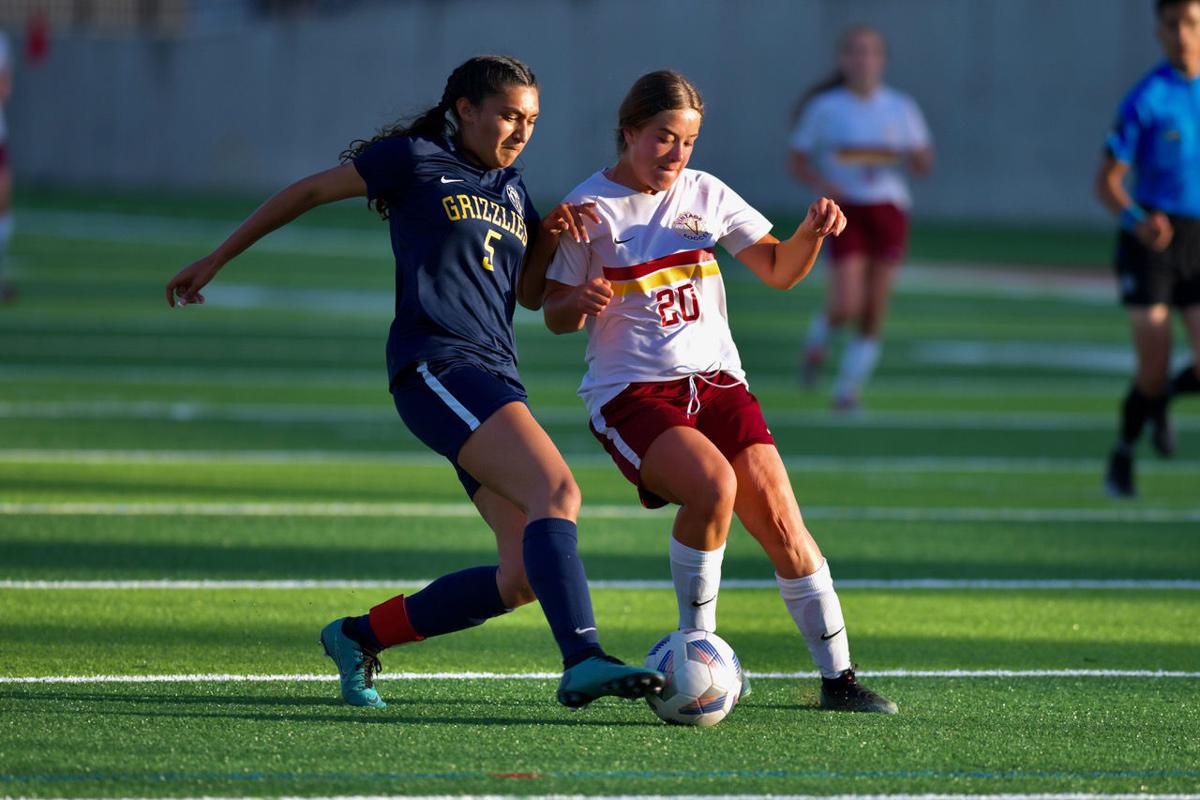 Somebody finally has bragging rights after a girls soccer Big Game in Napa and, for the first time since early January 2019, it’s Napa High.

The Grizzlies never trailed after being gifted an own goal in the first half Friday night.

Ariana Del Rosario doubled the lead with five minutes left and Sofia Reiswig’s free kick for Vintage during stoppage time was too late to turn the momentum in Napa’s 2-1 victory at Memorial Stadium.

The story since late January 2019 had been the four straight ties between the crosstown rivals, including a 3-3 scoring clinic weeks before.

“It is always a back-and-forth slugfest. Neither team wants to lose, each team leaves it on the field and, because a lot of times each team matches each other’s intensity, we end up with a tie,” Napa head coach Milton Gallegos said after his team improved to 3-2-2 in Vine Valley Athletic League play. “Today we just found a little bit of extra push to get that second goal and that really, I think, helped us relax a little bit.”

Napa High freshman Devin O’Donnell looked like she would break the ice in the 20th minute on a well-placed pass from senior teammate Annie Sanchez. A goal would result, but it was Vintage junior Celeste Calderon who, trying to kick it to the right of the post, inadvertently booted it inside it in for a 1-0 Grizzlies lead.

“That’s the game (of soccer),” Crushers head coach Miguel Ayala said of the own goal. “I thought we were possessing the ball well in the first half. I’m just really happy with the way my girls played.”

Each team kept the other’s goalkeeper busy all night, though senior Carla Magana had to fend off more shots on goal for Vintage (2-3-2 VVAL) than sophomore Ariel Nunez had to for Napa.

“Anytime we haven’t been aggressive in any game, the other team’s taken it to us,” Gallegos said. “Anytime we’ve matched their aggressiveness and push, we’ve always done well — especially today, fielding 12 players. We’ve never had more than 13 all year, so they have to be aggressive. They don’t have time to be soft and let teams come at us. With no subs, we have to be the aggressor and go after them.”

Each team had several corner kicks, but it was a cross from O’Donnell that set up Del Rosario’s first-ever varsity goal. The junior got the ball in front of the goal, dribbled left and, with her left foot, kicked it across her body and to just beyond the diving Magana’s fingertips.

“She’s a left-footer and she put it on her left foot and it’s probably the most important goal she’s scored since she joined Napa High Soccer. I’m happy for her,” Gallegos said.

As the game clock froze on 2:00 to signal stoppage time, of which there was maybe one extra minute, Reiswig put Vintage on the board. It sailed over the wall of Grizzlies, off Nunez's fingertips, and under the crossbar.

Gallegos said he wasn’t too worried that the final score would be yet another tying goal in this storied series.

“I know they have good free-kick takers and they were really working us on the left side and really catching us a little flat-footed at the end," he said. "But I was confident that as we were getting a little tired that we would adjust defensively. Not that it was in the bag. I was just confident that they weren’t too rattled by that goal.”

Ayala, asked if he thought the Crushers seemed nervous, said he had six freshmen on the field at times.

“They’re a little young, but no excuses,” he said. “They’re up here (on the varsity) for a reason. I’m really happy with where this team is at for the next couple of years.

“I’m really proud of the way the girls played. I couldn’t have asked for anything better. We just didn’t execute when we needed to, and that’s what it comes down to. Everything that we talked about leading up to this game, we executed. We created chances to score, we were pretty tight in the back. My respects to Napa. They scored and we couldn’t. (Nunez) is a good leader back there for them, always directing traffic.”

Napa was still without its top scoring threat, junior Ava Dominguez, who suffered a severe injury to her front teeth in a collision with the American Canyon goalie’s head on May 4. Gallegos said nerve damage was still being assessed, but that there was no fracture.

“We’ve missed her the last three games, but this is what good teams do: If you lose your main player, you adjust,” the coach said. “Others have to pick up the pace. Ella (Turjanis) had a good game and Ariel was focused in the goal. Annie hasn’t scored yet this year, but she’s done a lot for us and she’s been hurt a couple of games. We got her back right after Ava got hurt.

“My biggest happiness is not just that we won Big Game but for my three seniors, Diana (Calderon Montanez), Jasmine (Alonso) and Annie. They hadn’t had a Big Game varsity win and, with this being their last chance, especially after the uncertainty of even having a season, I’m really happy we could give those three girls a lot of time on the field.”

Napa High junior Ariana Del Rosario, on ground, watches her shot get past a diving Vintage senior goalkeeper Carla Magana for a 2-0 lead.