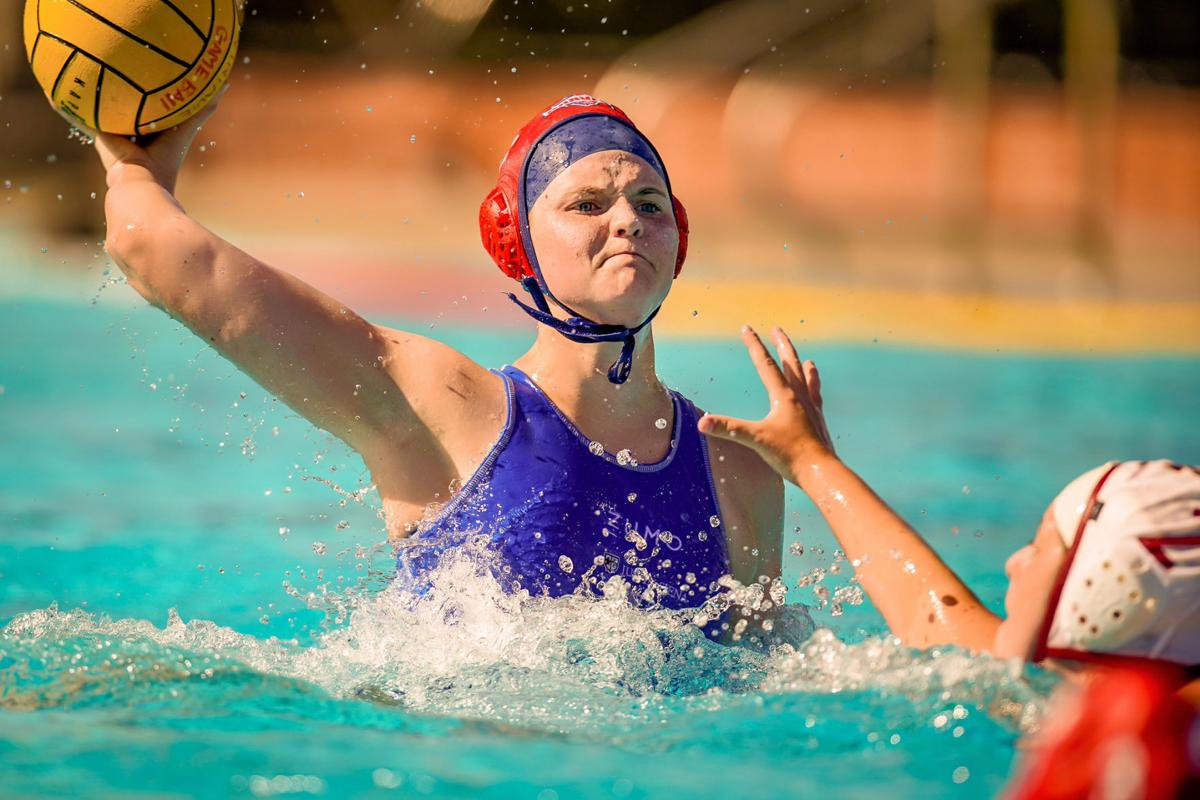 Justin-Siena's Elle Baskerville (5) winds up before scoring on a long-range shot over Vintage's Ashley Andrews on Wednesday. 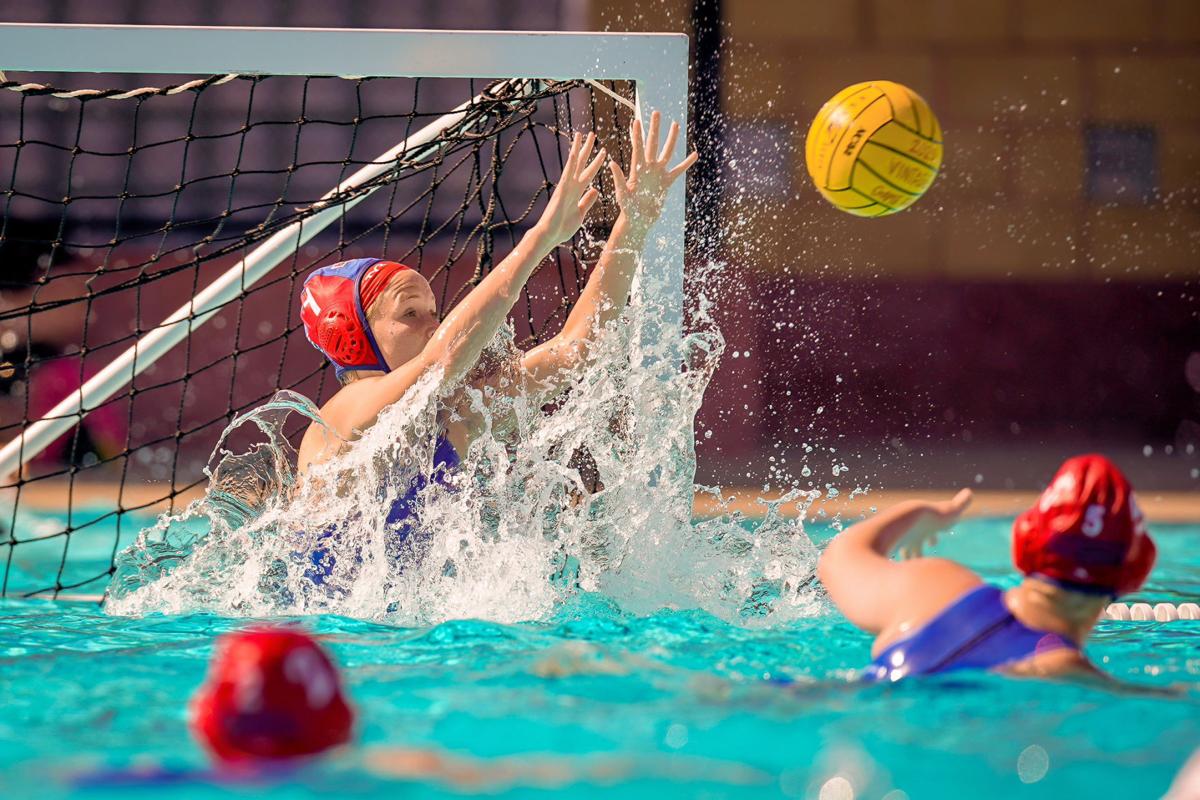 Justin-Siena goalkeeper Twyla Borck (1) leaps to make a save against host Vintage on Wednesday. 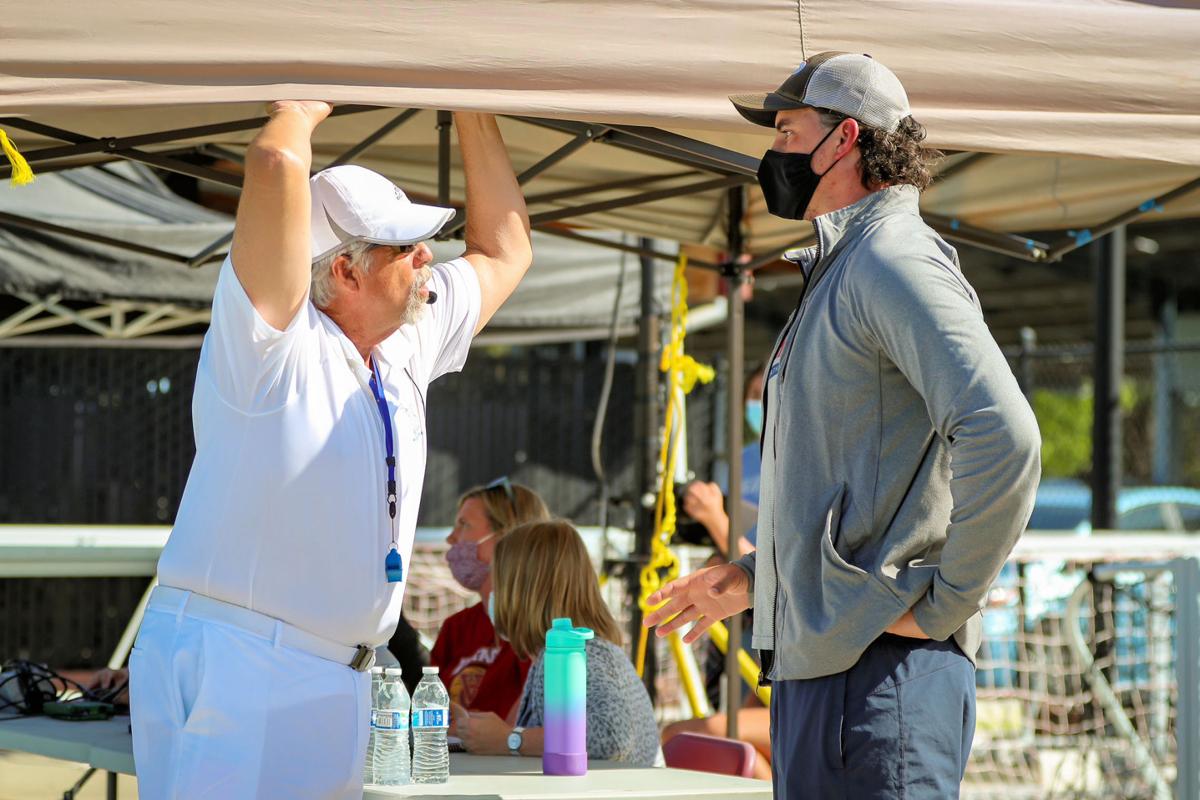 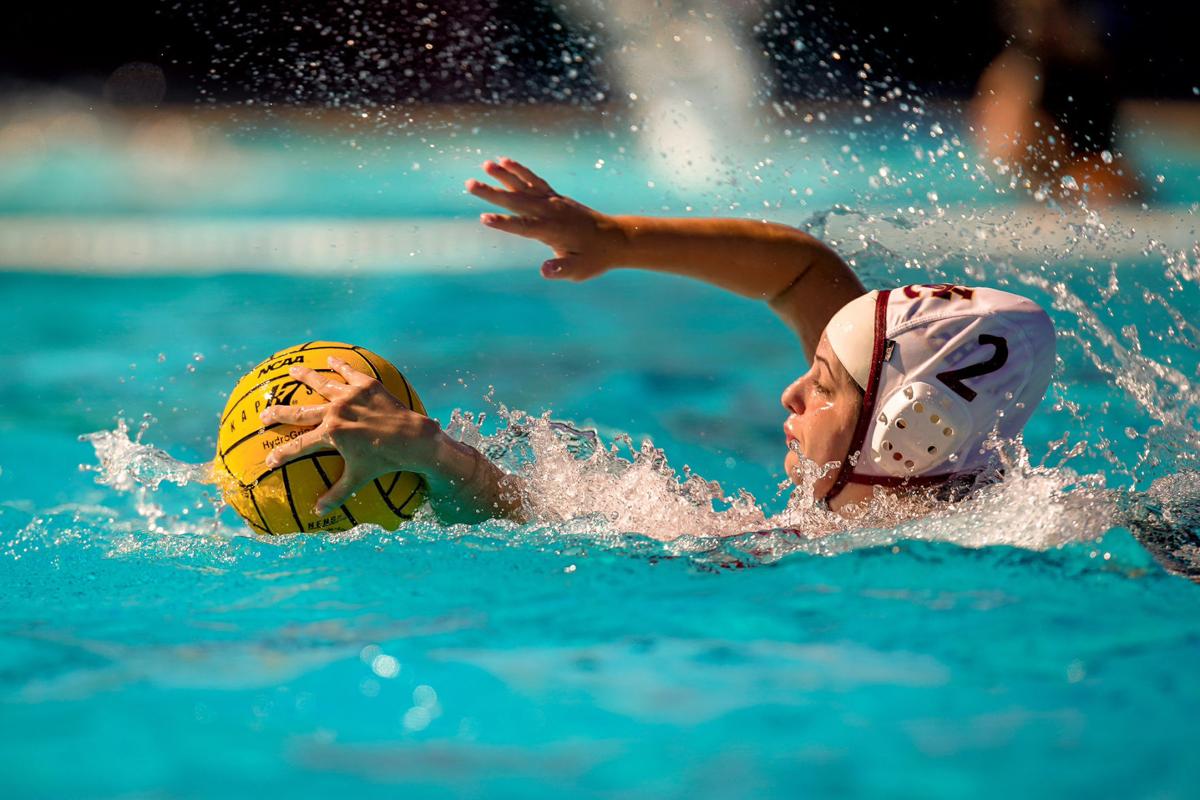 Vintage's Ashley Andrews (2) attempts to steal the ball from Justin-Siena's Angelina Phinney, whose right hand can also be seen, on Wednesday. 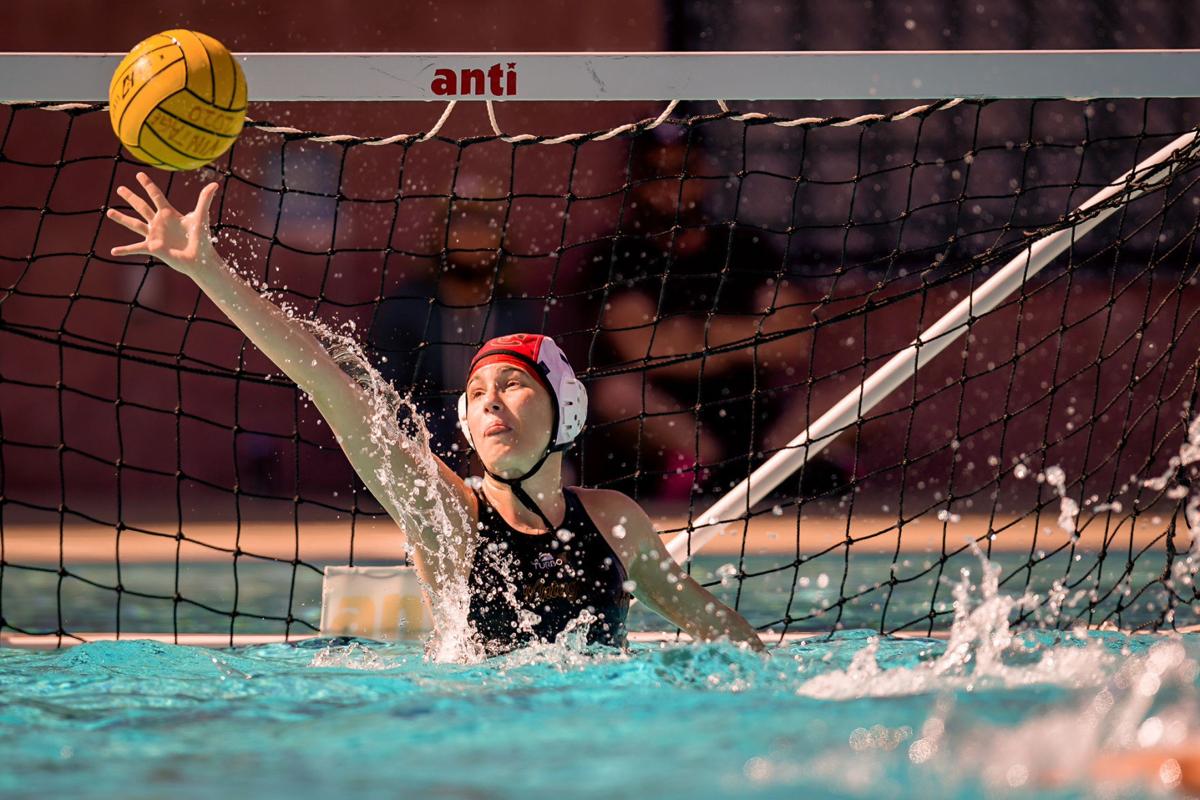 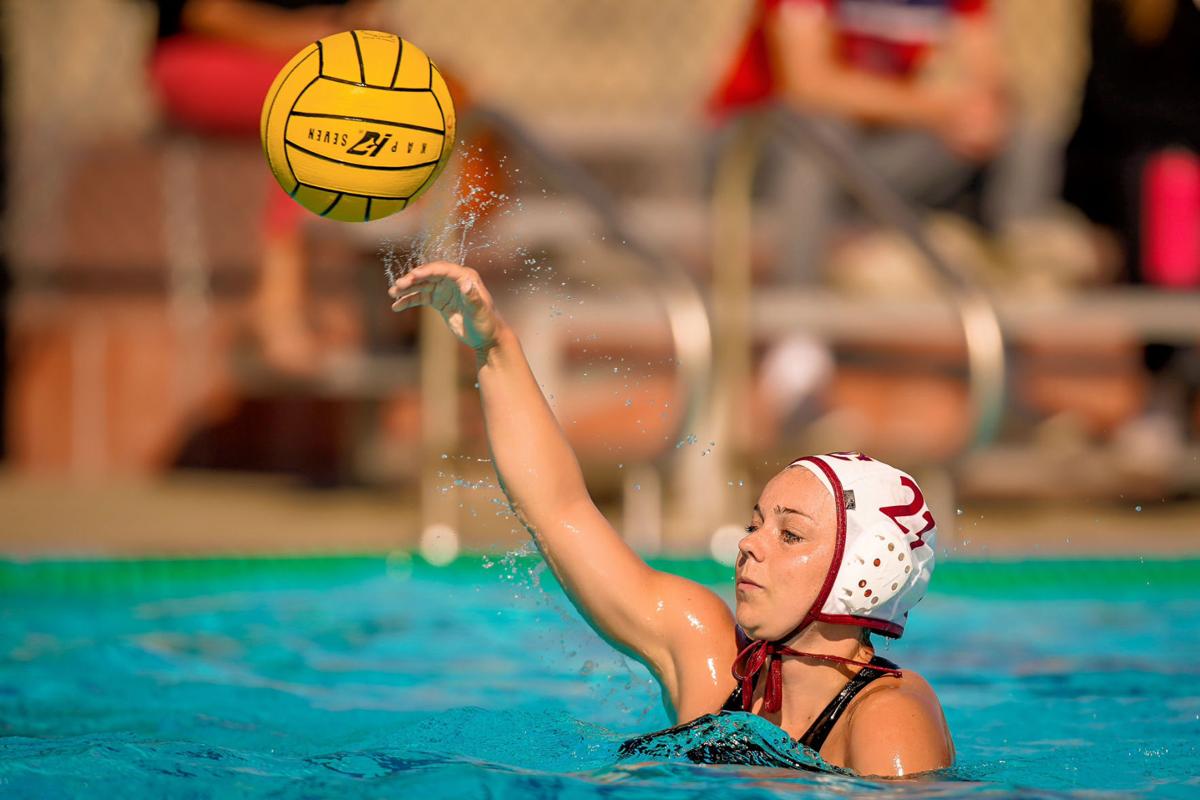 Sophia "Pia" Menzel shoots and scores Vintage's ninth and final goal of the day against Justin-Siena on Wednesday.

When an opponent has a defensive game plan to take away your top player, you have to adjust and come together as a team — even if you have only one substitute.

Justin-Siena did that Monday afternoon in a Vine Valley Athletic League girls water polo clash, using a strong third quarter to pull away from Vintage for a 14-9 victory in a battle of Trower Avenue rivals.

“We're a resilient team. We don't get rattled too easily,” said Justin-Siena head coach Joey Doyle. “Overall, that was a pretty frustrating game. We’re getting a lot of great, quality looks in the first and second quarters and pretty much the whole game. We just had a really tough time finishing and converting our opportunities.”

The Crushers had given up 5 goals to Sarah Reynolds in losing 10-3 to the Braves in the first meeting three weeks before. The junior had 1 goal this time, along with 2 assists and 3 ejections earned. Angelina Phinney had 4 goals, one in each quarter. Taylor Blakely had all of her 4 goals in the second half, adding an assist and 2 steals.

“Vintage did a really good job on defending Sarah,” Doyle said. “She’s our leading goal scorer and they ran, like, a big drop. They were double- and triple-teaming her the whole time, so they did a good job of neutralizing our top offensive threat. That opened up a lot of outside shots for us.”

Crushers head coach Sarah Tinloy has been pleased with the progress of her team.

"This group of girls have really elevated their level of play over the season,” she said. “We were able to give Justin a game and played as a team. I am so proud of the way they have come together. Their hard work and passion showed yesterday.”

Vintage (3-3, 3-2 VVAL) scored the first goal, as Lea Skille found the right post off a pass from Erynn Robinson. But a constant theme all afternoon for the Crushers was that, with each hard-fought inch of momentum, the Braves seemed to have the answer.

Justin-Siena (6-0, 5-0 VVAL) scored the next three goals. About a minute after the Crushers’ first goal, Carlie Fiorito got a wide-open Lexi Hollister (2 steals) to deposit the ball past Vintage goalkeeper Savannah Davis. The next two goals came within 30 seconds of each other, as Taylor Blakely scored on a fast-break opportunity. Blakely assisted on the next score, as she found Reynolds in front of the net.

“I definitely think this has been an interesting season, very unusual, but we have put in a lot of work and it is nice to see it pay off,” said Justin-Siena goalkeeper Twyla Borck. “What I think it comes down to is we play as a team. We look to score not for ourselves, but as a team to win. I think that is a really strong asset that comes from us being a small team. We have faith in everyone and we trust everyone.”

Vintage bounced back with two goals in the final two minutes of the first quarter. Skille had a cross-the-pool assist to Sophia “Pia” Menzel, and Skille grabbed her second goal of the quarter on a fast-break up the middle.

The Crushers once again took the lead early in the second frame, as Rachel Galvin received a quick pass after a stoppage in play and put Vintage ahead 4-3 with just under five minutes remaining in the half. Just 25 seconds later, the Braves were back on the board as Elle Baskerville wound up and uncorked a deep score. The sophomore scored on another deep shot to give Justin-Siena the lead for good a couple minutes later.

Baskerville (3 assists) helped Phinney pick up her first goal, with yet another far-range precision shot from the Justin-Siena attack, to put the Braves up 6-4 heading into the break.

Having only eight players, half of what Vintage had, was the result of the league’s smallest school having to also field basketball, lacrosse, track, softball, soccer and volleyball teams in the same two months as the COVID-19 pandemic forced schools to play an entire year of sports this spring.

“We came into this season really not knowing what our team was going to look like,” Baskerville said. “We had a really good team to begin with, but with COVID, a lot of us had to choose between basketball and water polo. So it was a little scary at the beginning, losing a couple of key players to basketball, but I think we have done well with what we have.”

The advantages that started in the second frame continued for Justin-Siena. Less than a minute into the third quarter, Blakely perfectly placed a floating shot into the back corner of the net. Menzel added a long-distance shot of her own to pull Vintage within 7-5. But once again the Braves answered back, as Baskerville grabbed her third goal with just under three minutes remaining in the quarter. The Braves extended their lead back to three goals when Fiorito (2 assists, 1 ejection earned) rebounded her first shot and buried the second attempt with 2:28 left in the third.

“I think a lot of how we play is based on momentum,” Borck said. “We are usually a second-half team; we get our momentum in the second half,” Borck said. “Even though they may have scored a couple goals, we can still build off of that momentum and carry it into our offense. The best way to get back at a team is by scoring on them.”

Phinney notched another goal up the middle on an assist from Baskerville to stretch the lead to 10-6. Vintage kept the contest close on Presley Calkins’ floater shot, but Justin-Siena found the back of the net 20 seconds later. Blakely, after a stoppage, quickly threw the ball up to assist Reynolds on her only goal of the game.

“I think it just comes down to discipline,” Doyle said. “We’ve been trying to stress all year to be aware and to not settle for shots — try to kind of work the defense down, look for high-percentage shots out there. Today we got a lot of good, quality shots, especially in the first half and third quarter. But we just had a very tough time, a lot of unforced turnovers or a lot of shots that missed the cage.”

Blakely scored on a pass from Maddie Vanoni (4 assists, 1 steal, 2 ejections earned) to push the Braves’ lead to five, before Vintage’s Ashley Andrews was stopped twice by Borck before grabbing the second rebound and nabbing a goal. Borck was solid for the Braves, as the junior had 12 saves.

The game ended with Blakely scoring her second of the frame, Galvin picking up Vintage's last goal with a near-net score, and Vanoni finding Phinney for a fast-break goal.

“Overall, I am very proud of their level of play,” Tinloy said. “They applied what we have been working on and they have truly become a team. It has been a pleasure coaching them this year."

At 5 p.m. Wednesday, Vintage hosts American Canyon while the Braves are in Santa Rosa to take on Cardinal Newman.

Justin-Siena's Elle Baskerville (5) winds up before scoring on a long-range shot over Vintage's Ashley Andrews on Wednesday.

Justin-Siena goalkeeper Twyla Borck (1) leaps to make a save against host Vintage on Wednesday.

Vintage's Ashley Andrews (2) attempts to steal the ball from Justin-Siena's Angelina Phinney, whose right hand can also be seen, on Wednesday.

Sophia "Pia" Menzel shoots and scores Vintage's ninth and final goal of the day against Justin-Siena on Wednesday.