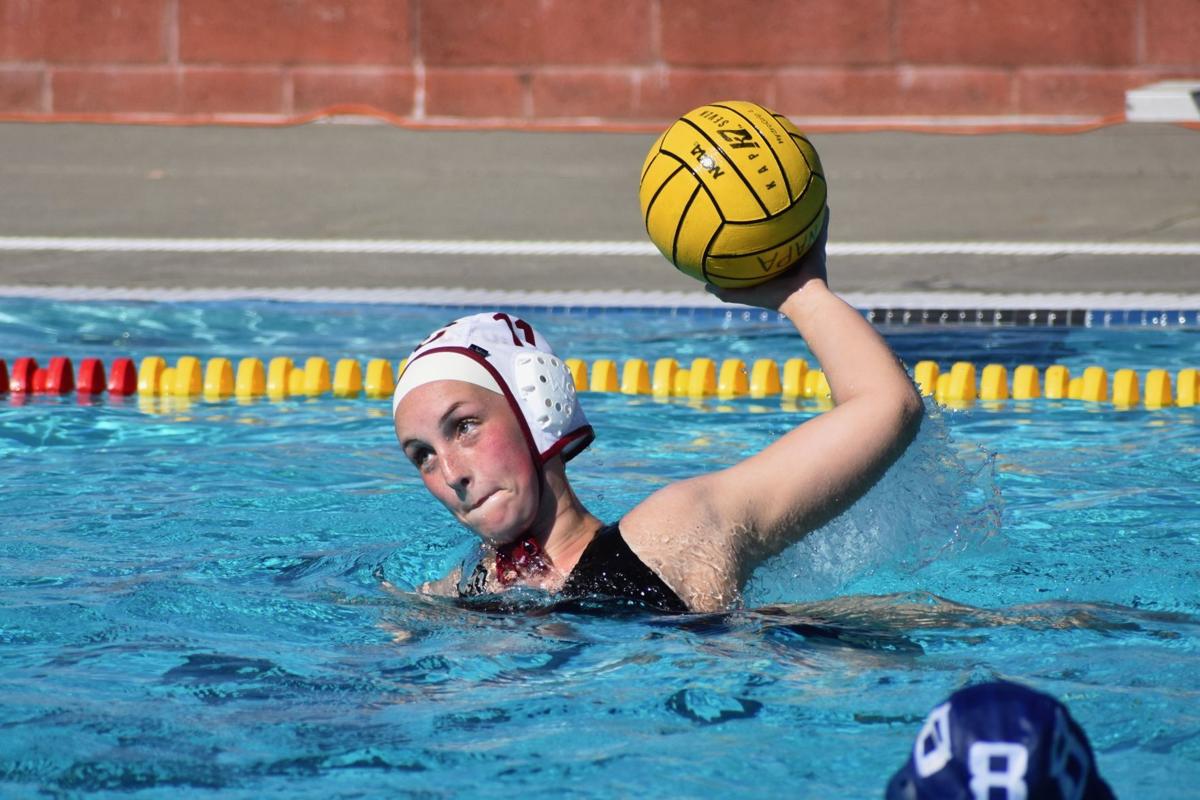 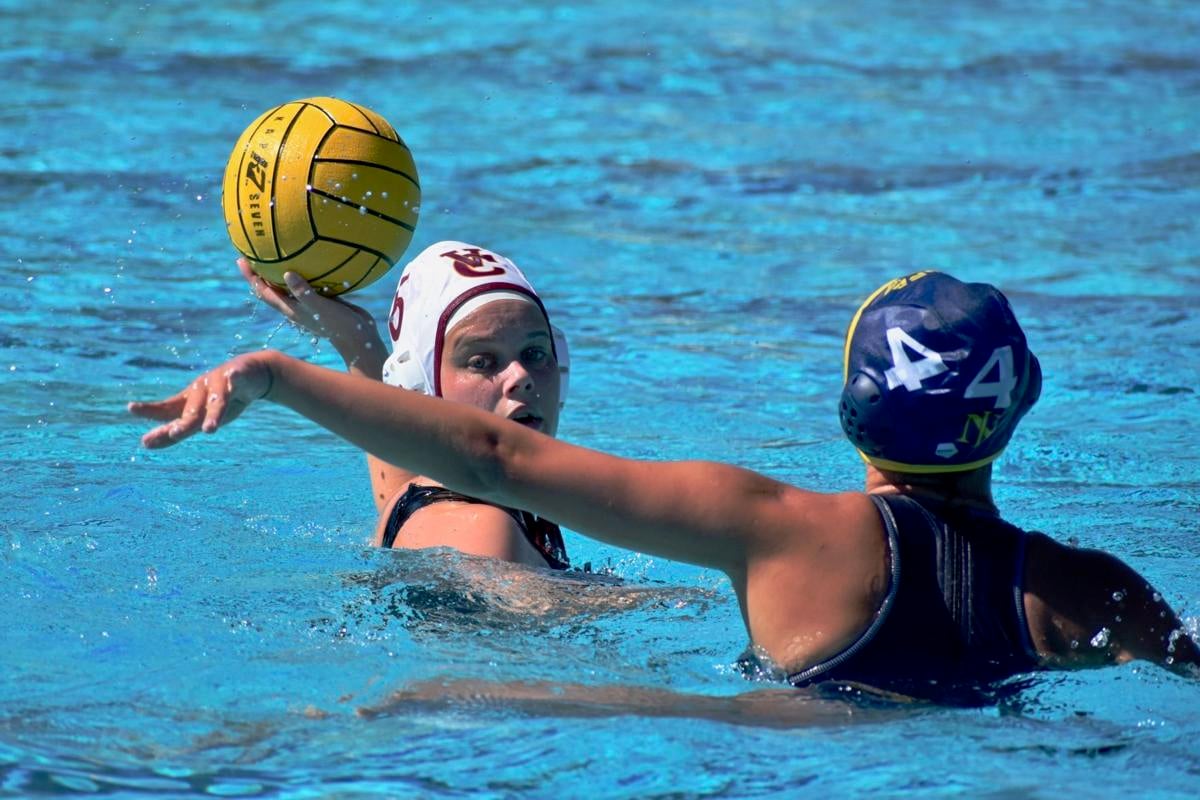 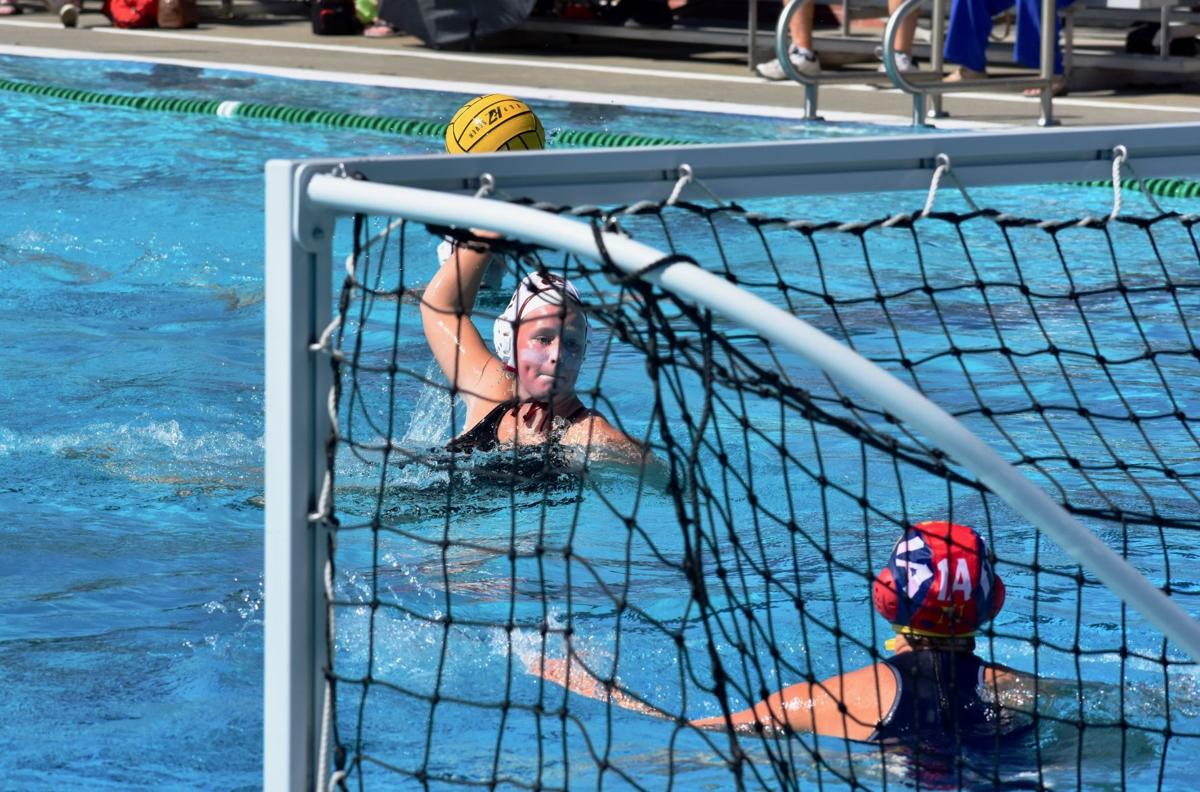 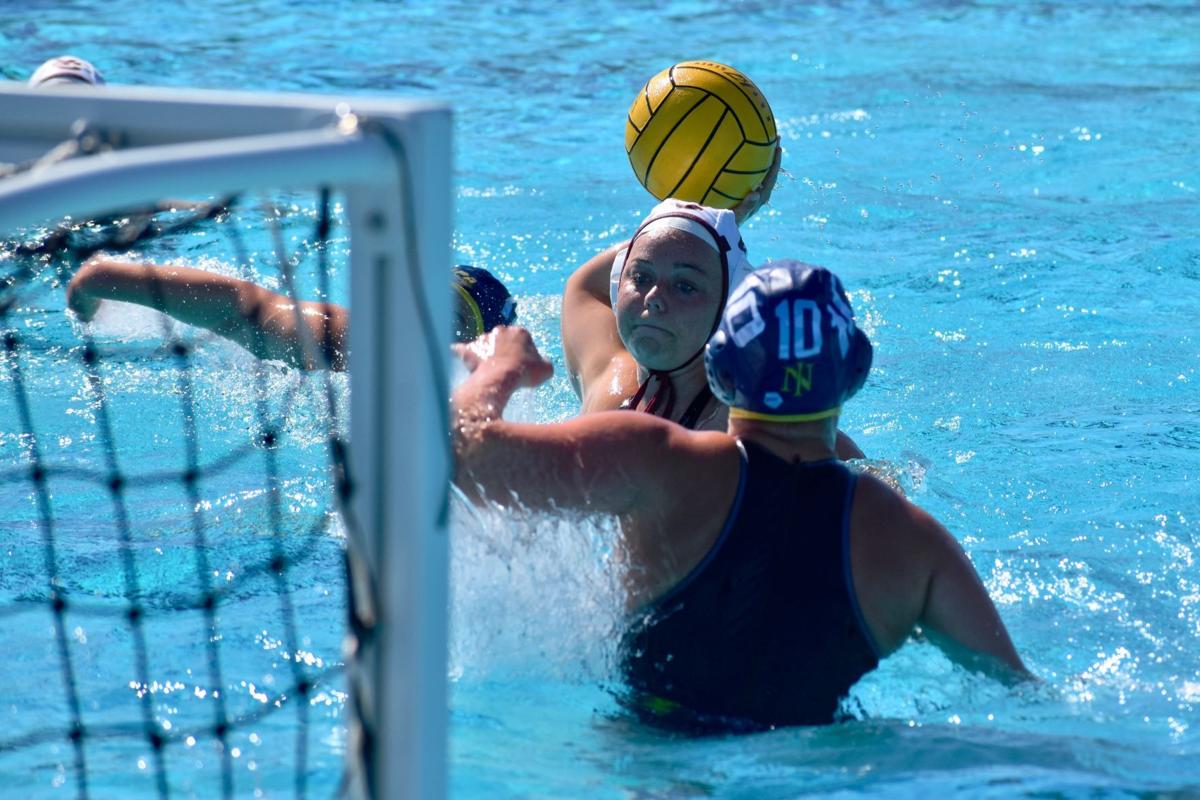 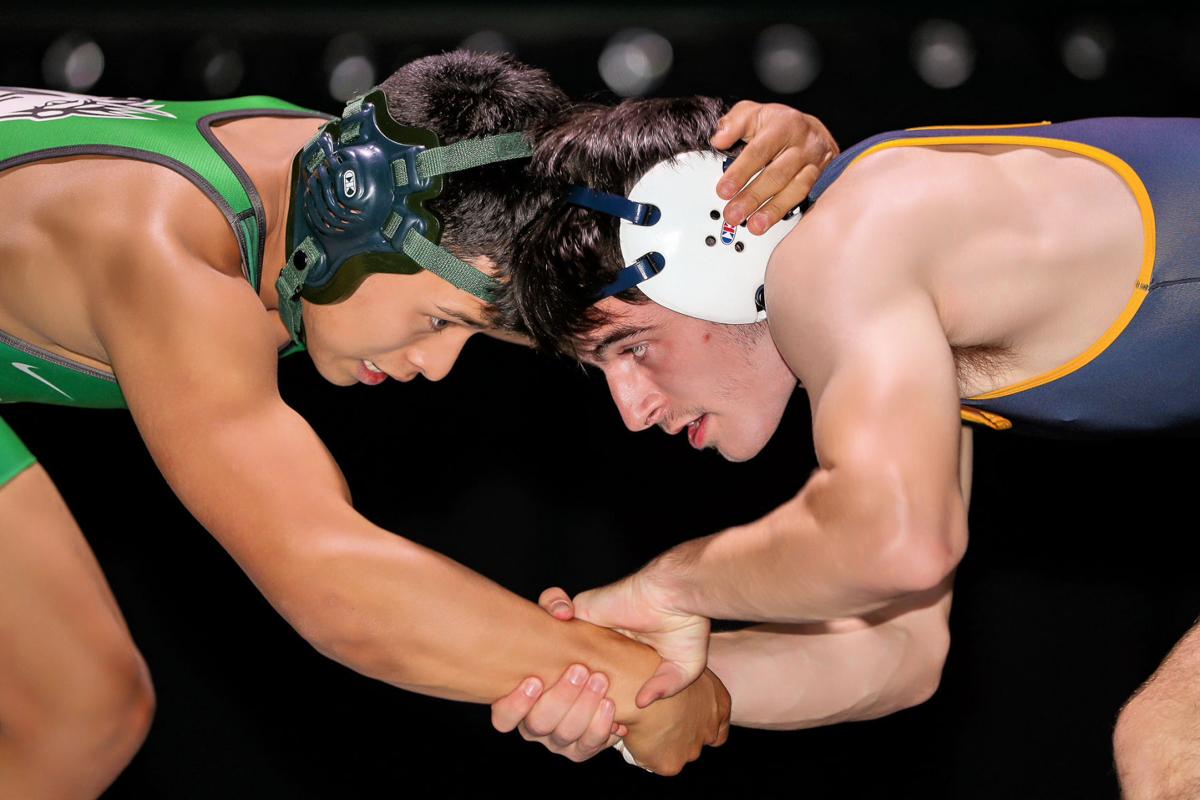 Napa High's Robert Gomez, right, locks up with Sonoma Valley's Francisco Morales-Florentino, a former Justin-Siena running back, in Sonoma on May 19. 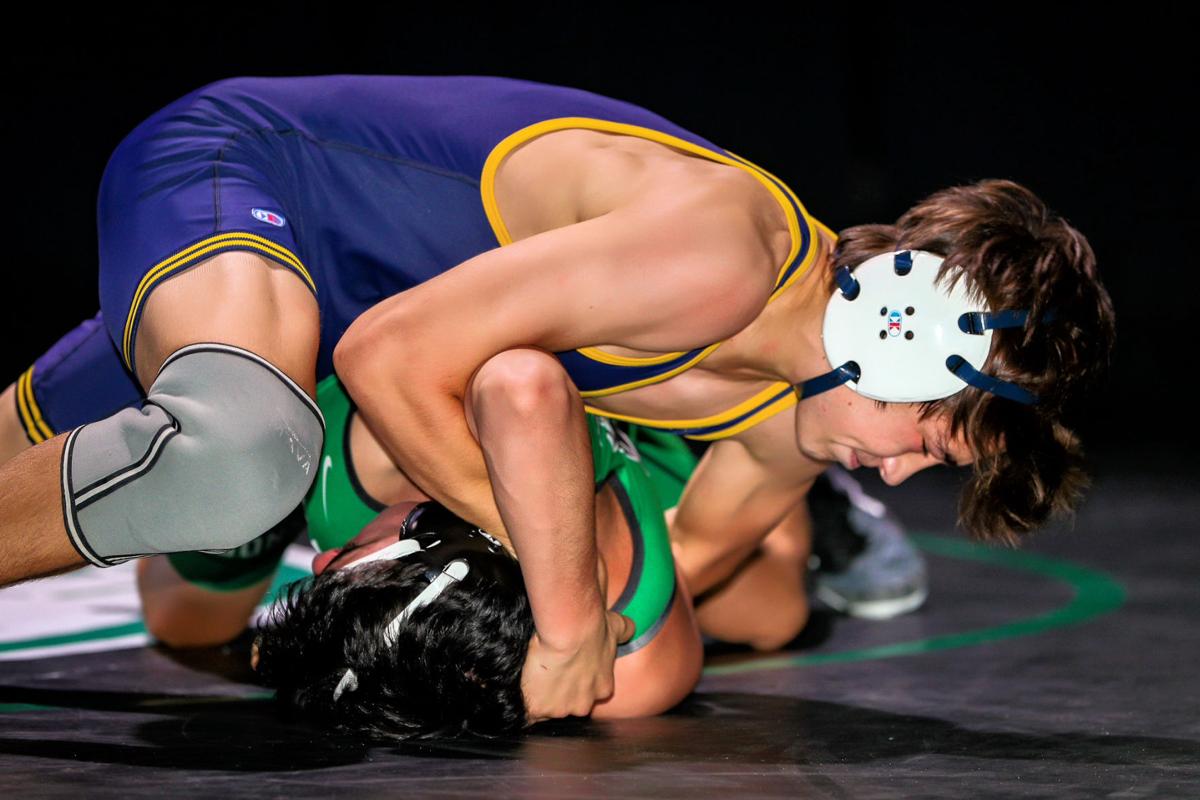 Napa High's Jonah Schwarze rolls Sonoma Valley's Marcello Saldana with a half-Nelson before pinning him in the first period May 19 in Sonoma. 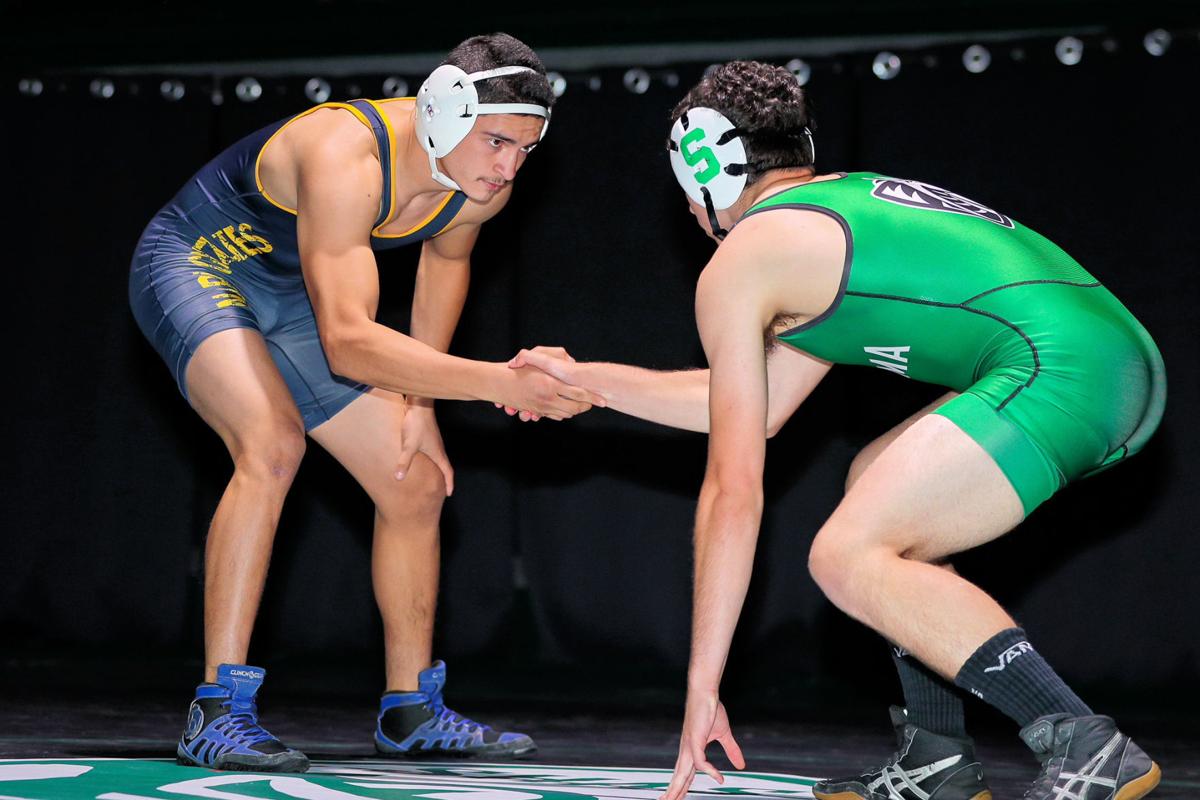 Napa High's Benito Saldivar, left, shakes hands with Sonoma Valley's Owen Brown before pinning him in the second period on May 19 in Sonoma. 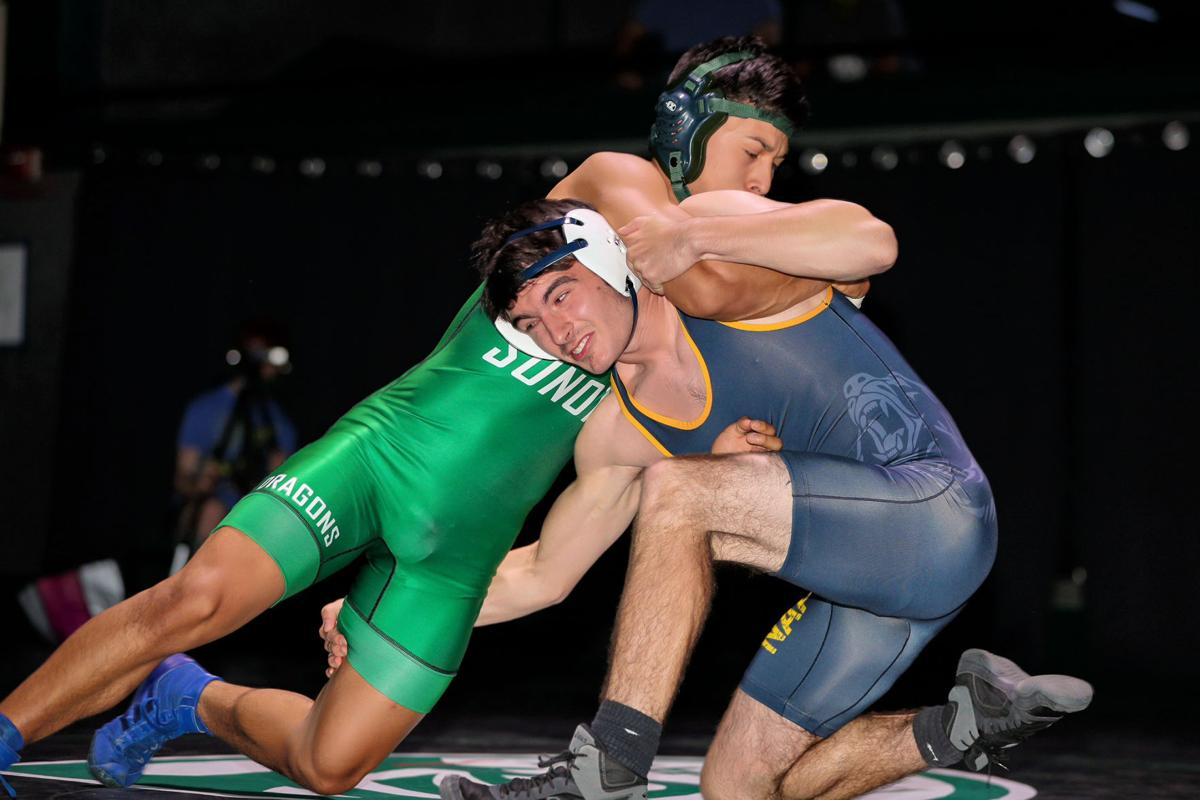 “All five of these seniors will be deeply missed next year, but they have worked with the younger athletes and taught them the true meaning of Vintage Water Polo,” said Crushers head coach Sarah Tinloy. “I am excited to see where life takes these talented young ladies.”

Calkins scored the first goal 45 seconds into the game and went on to add another goal along with an assist and steal. Robinson lit up the scoreboard with 6 goals while assisting on 3 more and earning 3 steals. Mozqueda earned 2 steals and was a playmaker throughout the game. Skille scored 1 goal and earned 2 steals. Menzel added 4 goals, 3 assists and 2 steals.

Goalkeeper Savannah Davis was a wall, stopping 16 well-placed shots by the Grizzlies. One was a 5-meter shot, an undefended penalty shot from the 5-meter line. Davis also assisted a counter attack goal, and came out of the goal to steal the ball three times from the crosstown rivals.

Emma Enos was another playmaker for Vintage, giving her team advantages and earning a steal. Juliet Lawrence added a goal, an assist and a steal. Ashley Andrews scored a goal and caused an exclusion, giving the Crushers a man-up power play opportunity. Rachel Galvin was a powerhouse on defense, stealing the ball 6 times while causing 3 exclusions, scoring 4 goals, and assisting 5 of her teammate's goals.

Christopher Gaxiola, Jonah Schwarze, Benito Saldivar, Graham Gongora, Axel Briseno and Rudy Hernandez all won by pin for Napa High in a VVAL scrimmage in Sonoma on May 19.

Robert Gomez and Nathan Schwarze lost by decision for the Grizzlies, who visit Petaluma at 6 p.m. Wednesday. Next Wednesday, June 2, Napa will face Vintage in a season-ending, and first-ever, Big Game outdoor wrestling meet at Memorial Stadium.

The Grizzlies out-hit the Cougars 6-5 but committed four errors in Monday’s nonleague road loss. Rancho Cotate broke a 2-2 tie with three runs in the bottom of the fifth.

The visiting Bruins broke a 4-4 tie by outscoring the Braves 4-1 in the fourth inning and 3-1 in the fifth while notching a nonleague win Monday.

Noah Young had tied the game at 4 for Justin-Siena by leading off the bottom of the third with a “soaring no-doubt, 350-plus-foot” home run over Solano Avenue,” according to Braves head coach Jeremy Tayson, Young’s third homer of the season.

The Braves (7-6) will try to improve on their 4-4 VVAL record when they host first-place Casa Grande at 4 p.m. Wednesday, one of five games in 10 days to close their season.

Sydney Scheer led the victorious Crushers with 5 goals in a high-scoring Little Big Game on Monday at Vintage. Valentina Arcos added 3 goals and 1 assist, caused an exclusion, and earned 2 steals. Kira Tavakoli scored a goal, assisted a goal and earned 3 steals. Guimar Arcos and Sofia Lopez each earned a steal, with Lopez also scored a goal. Addy Knox earned 2 steals. Aya Hassan had 3 assists, a goal and 2 steals, and Gianna Gresetto caused an exclusion. Juliet Larence scored a goal and had 4 assists and 4 steals, caused 2 exclusions and had a field block. Marysol Aguayo earned 4 steals and had a goal and an assist, and Isabelle Frye played solid defense.

In the goal, Parker McClintick had 2 saves and Audrey U'Ren had 4 saves while splitting her time in the field, where she had 2 steals and 1 assist.

Napa High's Robert Gomez, right, locks up with Sonoma Valley's Francisco Morales-Florentino, a former Justin-Siena running back, in Sonoma on May 19.

Napa High's Jonah Schwarze rolls Sonoma Valley's Marcello Saldana with a half-Nelson before pinning him in the first period May 19 in Sonoma.

Napa High's Benito Saldivar, left, shakes hands with Sonoma Valley's Owen Brown before pinning him in the second period on May 19 in Sonoma.