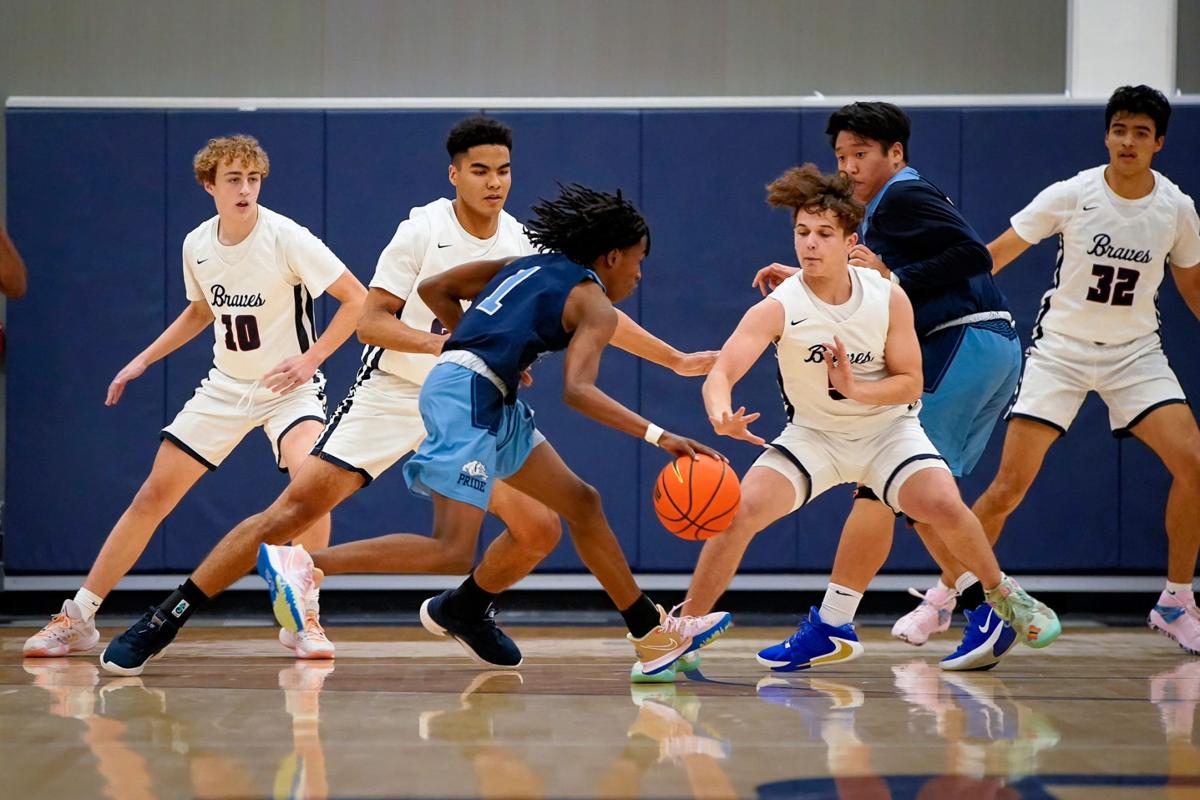 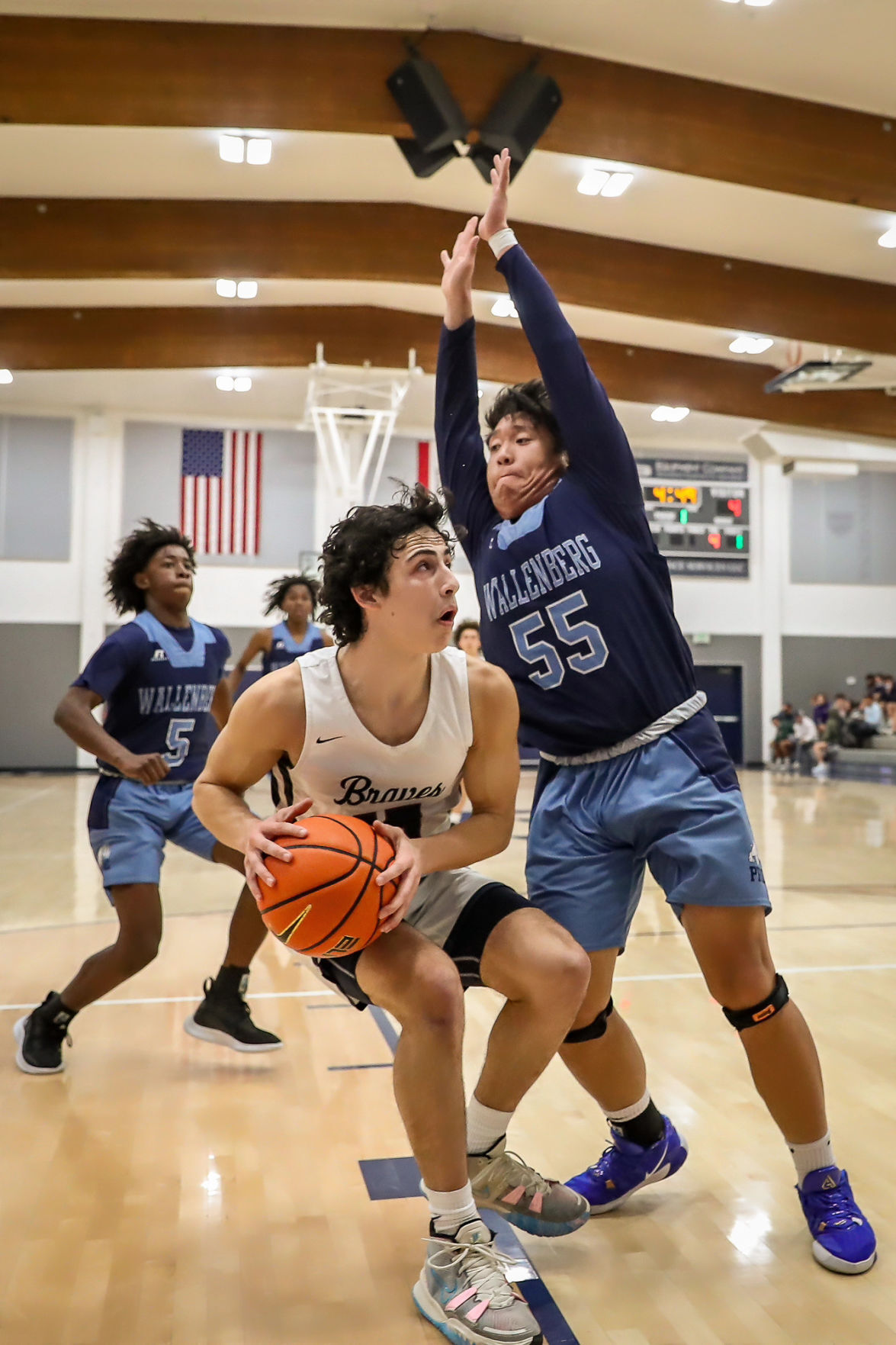 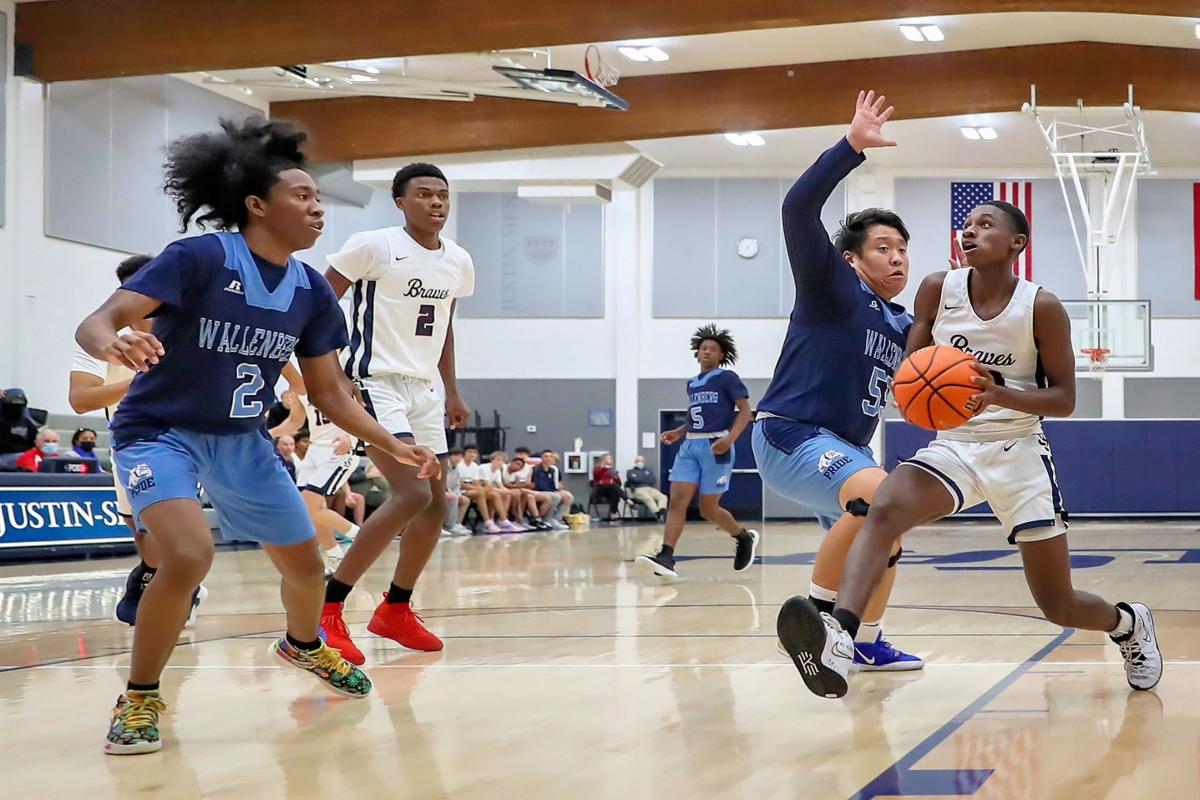 Justin-Siena's Ma'el Blunt drives for a layup against visiting Wallenberg on Tuesday night. 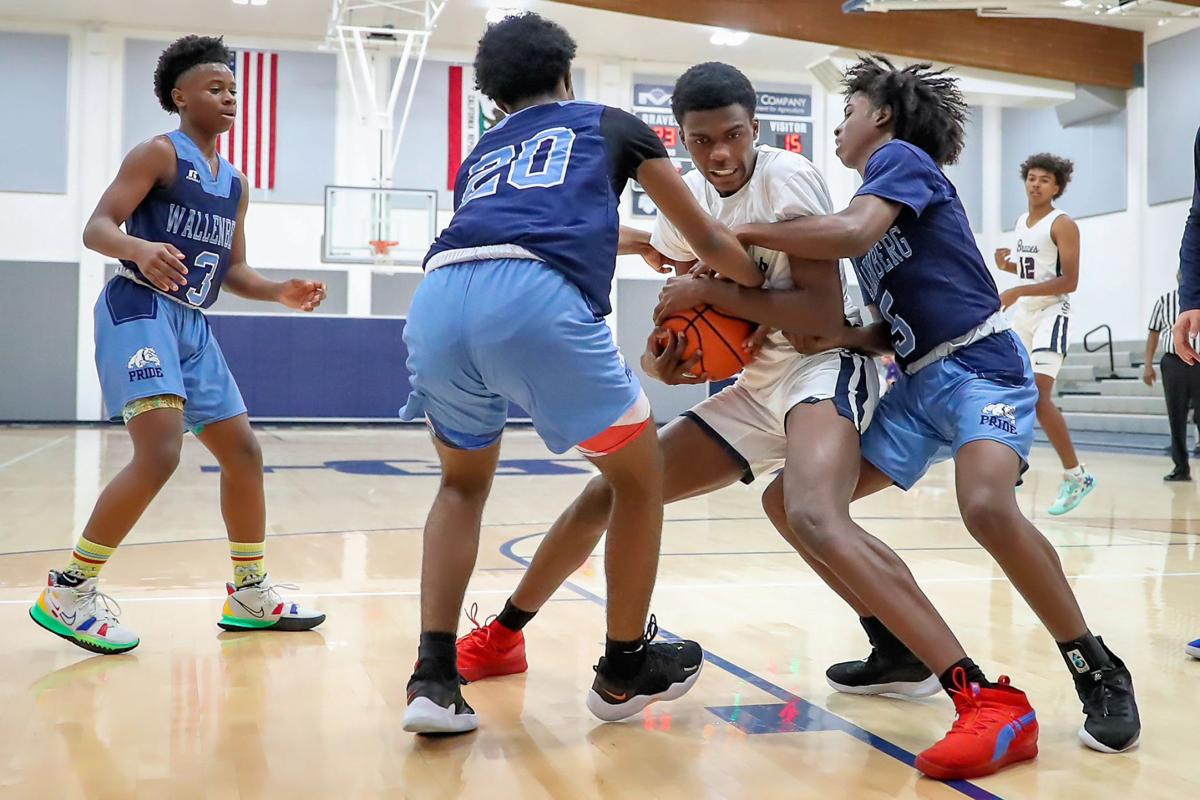 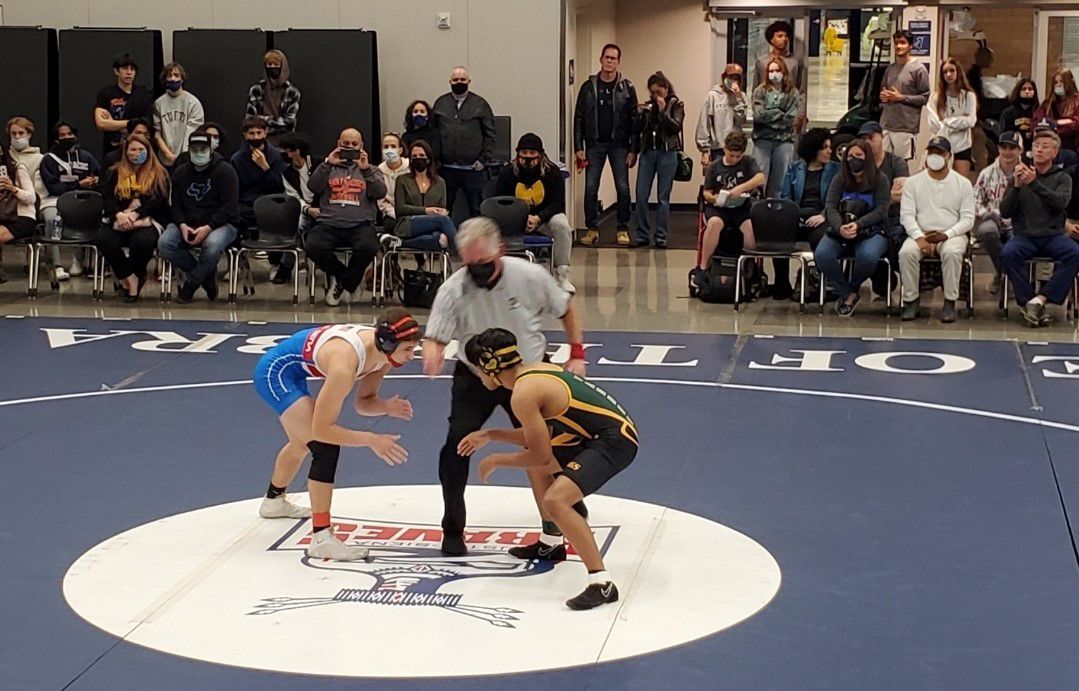 Cooper Cohee, left, leads off with a major decision for the Justin-Siena wrestling team against visiting Vanden on Tuesday night. 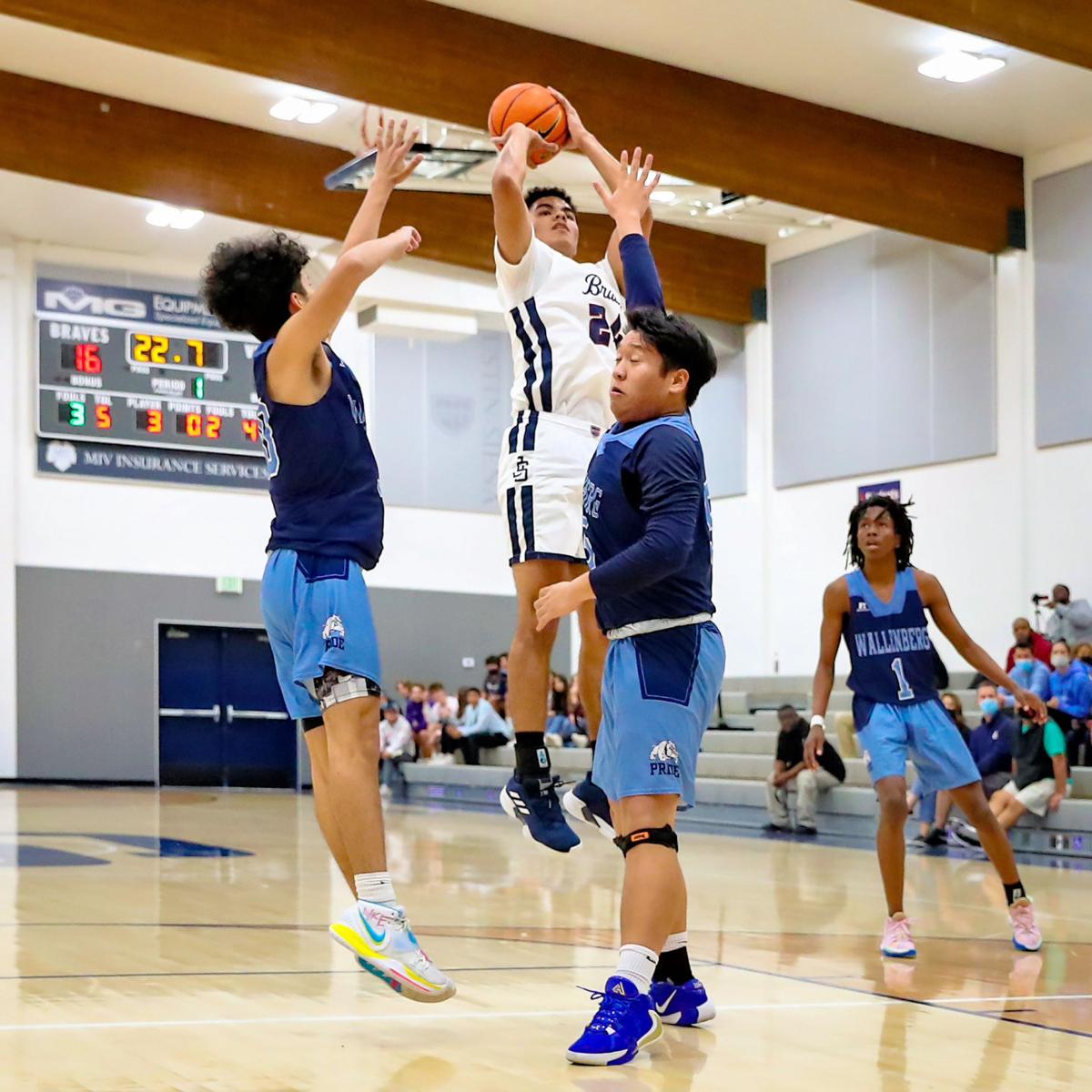 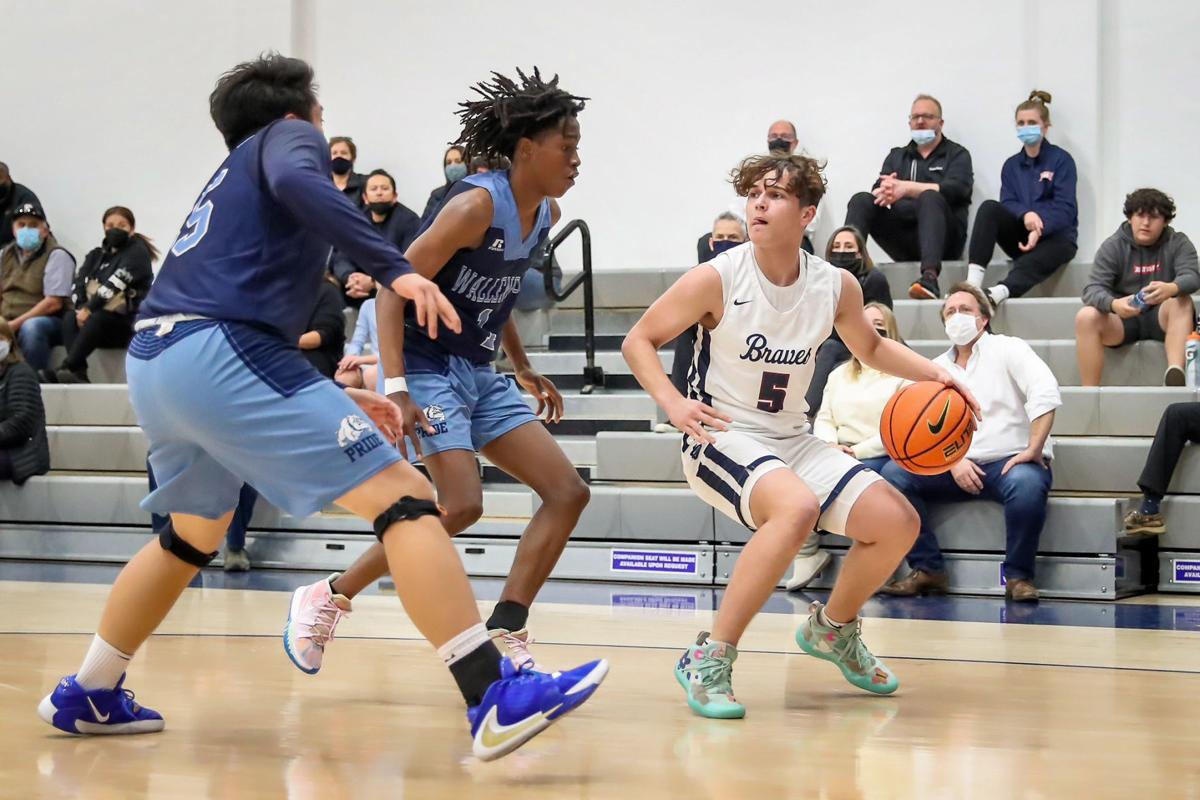 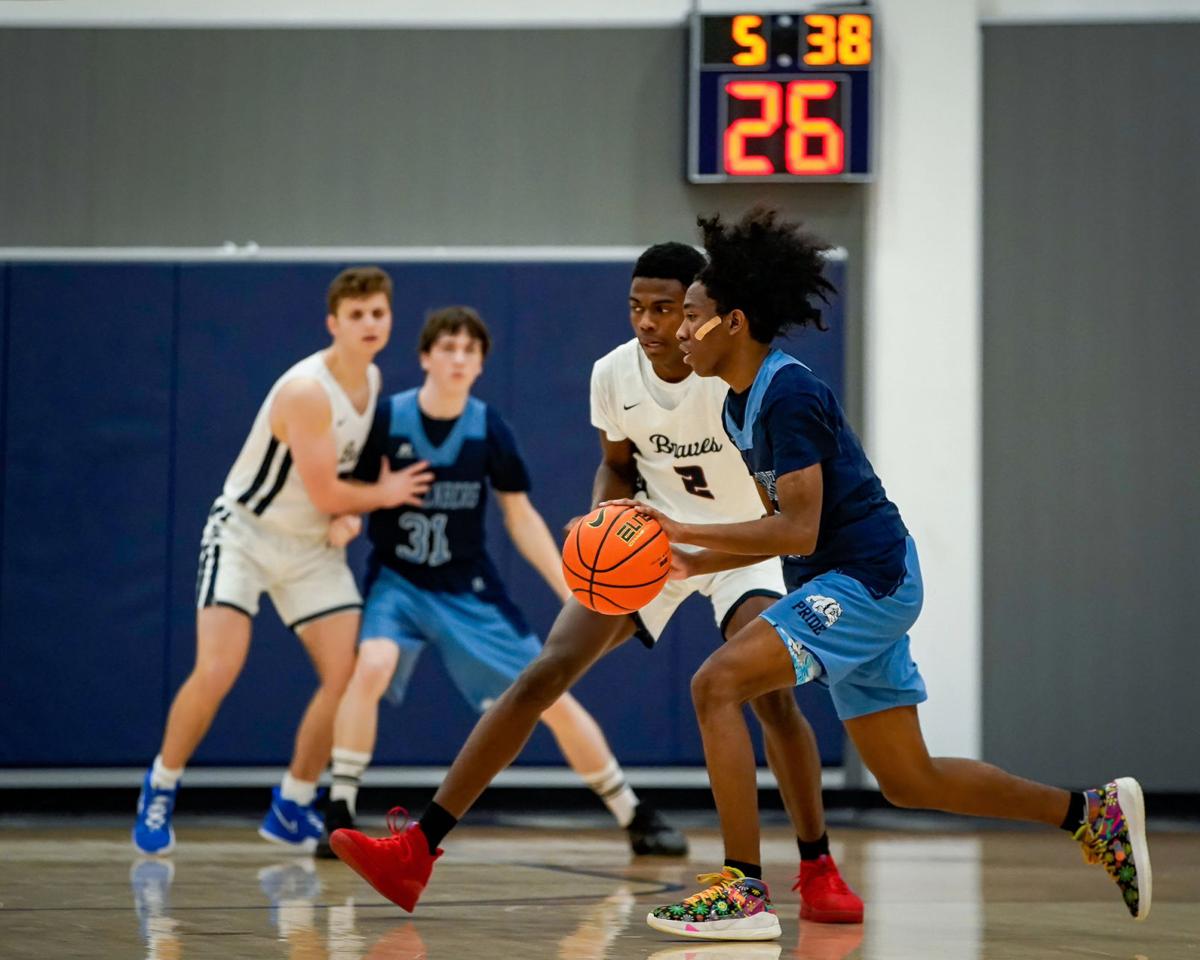 The up-tempo, highly competitive game was tight for most of the first half, as Justin-Siena took a 34-22 lead into halftime before slowly pulling away from the Bulldogs.

The Braves take on Palma of Salinas in the first round of De La Salle’s Vontoure Classic at 3:30 p.m. Thursday in Concord.

The Crushers hosted their second opponent this season from the tough Diablo-Foothill League and prevailed over the Dons of Lafayette in overtime Tuesday night.

“Northgate is a solid team, however, we had a few too many unforced errors. We watched film, which confirmed our need to improve in certain areas,” he said. “We continue to improve and knew Acalanes would be a challenge, and it was a battle from the tip.”

“He’s big and has a presence. They went to him right away,” Gongora said. “Luckily, we adjusted and held him scoreless in the second quarter.”

Vintage had beaten Vallejo 52-51 on a last-second layup and it looked like the Crushers would win this one the same way, when Ben Jackson drove hard and put up a floater in the final minute. But it rimmed out and the teams went to overtime. Jackson got it done in the extra four-minute period with two buckets, while Anthony Notaro added a free throw.

Gongora was pleased to see Vintage get scoring from six players, twice as many as against Northgate. Jackson Corley lead all scorers with 23, followed by Jackson with 18, Cole Capitani with 12 and Notaro with 6.

“There was better balance offensively and we were much more aggressive attacking the rim,” Gongora said. “The good news is we shot 22 free throws. The bad news is we only made 13.”

Acalanes was led by junior Theo Stoll and senior Noah Bloch with 18 apiece.

“I love it that we’ve been in two close, tight games and kept our composure,” the coach added. “We continue to compete even when the pressure is on, which will help us in the balanced Vine Valley Athletic League.”

Vintage takes on Archie Williams High in the final game of Thursday’s first round of the three-day Wine Valley Tournament at Napa High. Tip-off is scheduled for 8:30 p.m.

The Wolves scored in the 90s for the first time in school history as they trounced the visiting Pirates on Tuesday night.

American Canyon (3-2) opened up an 18-point lead in the second quarter thanks to full court pressure and sharp shooting. Pittsburg cut it to 43-35 by halftime, but the Wolves outscored them 24-9 in the third and never looked back.

Mikey Pierce led American Canyon with 20 points — his fourth game in the 20s this season — while throwing down three thunderous dunks. Max Parmigiani added 17 points, including three 3-pointers, and Khai Curry scored 12. Head coach Scott Hayburn said his player of the game was Raekwon Bell, who scored 9 while pulling in 15 rebounds and dominating the paint on both sides of the floor.

“It was a great atmosphere and a really fun game to watch,” Hayburn said. “Raekwon was outstanding, but every player on the team did his job tonight. Sometimes I like to just step back and watch these kids like a fan.”

American Canyon plays next at Armijo on Monday.

The Saints go into their Sutter Home Invitational this weekend with a 1-1 record after falling in overtime to visiting Winters on Tuesday night.

Will Meyer led the hosts with 20 points, including their only 2 points in the four-minute extra period. Charlie Carpy scored 11, Josh Johnson 8, Grayson Ittig 7, Micah Marquez 5, and Ethan Drumm 1. Ittig had St. Helena’s only 3-pointer.

The Braves’ first home dual meet of the season was an emotional rollercoaster Tuesday night as they wrestled well enough to win, co-coach Jason Guiducci said. But they couldn’t make up for five forfeits to the Vikings from Travis Air Force Base, who were a Superior California Athletic League opponent of Justin-Siena when it was a Sac-Joaquin Section school.

Baca drew the most raves on the night by closing out the dual with his pin in the 285-pound weight class even though he was outweighed by at least 40 pounds.

“Kurtis’ win brought down the house tonight,” Jason Guiducci said. “Though wins have been evasive, he has never quit and he’s trusted us when we said success would come if he stuck it out. Though he is our All Heart wrestler on the night, he has been all heart throughout his career.”

The Wolves fell in their season opener Tuesday night in Martinez.

“Looking forward to the challenge for the rest of the season,” the coach said.

The Crushers set the tone for the varsity’s victory by giving their own fans some free basketball. Nathan Marroquin drained a 3-pointer to put them up by 4 and seal the victory as he had all of his 5 points in the two overtimes. Brady Hearns led Vintage (4-1) with 14 points, Siam Sabbagha scored 9, Adam Drozdowicz had 8 while going 4 for 4 at the free-throw line, Jace Lopez had 7, Noah Akkerman scored 6, and Grayson Wyman had 4.

“We had an awesome win over a team that maybe was better than us,” Vintage head coach Chuck Johnson said. “Acalanes is always a quality program.”

The Crushers visit Alhambra on Thursday.

Ahewa Manna and Alena Nutt played well for the Wolves in their season-opening loss Tuesday night in Martinez.

American Canyon High School has had a very competitive boys basketball rivalry with sister school Vintage since 2019-20, when Vintage won its …

Justin-Siena's Ma'el Blunt drives for a layup against visiting Wallenberg on Tuesday night.

Cooper Cohee, left, leads off with a major decision for the Justin-Siena wrestling team against visiting Vanden on Tuesday night.