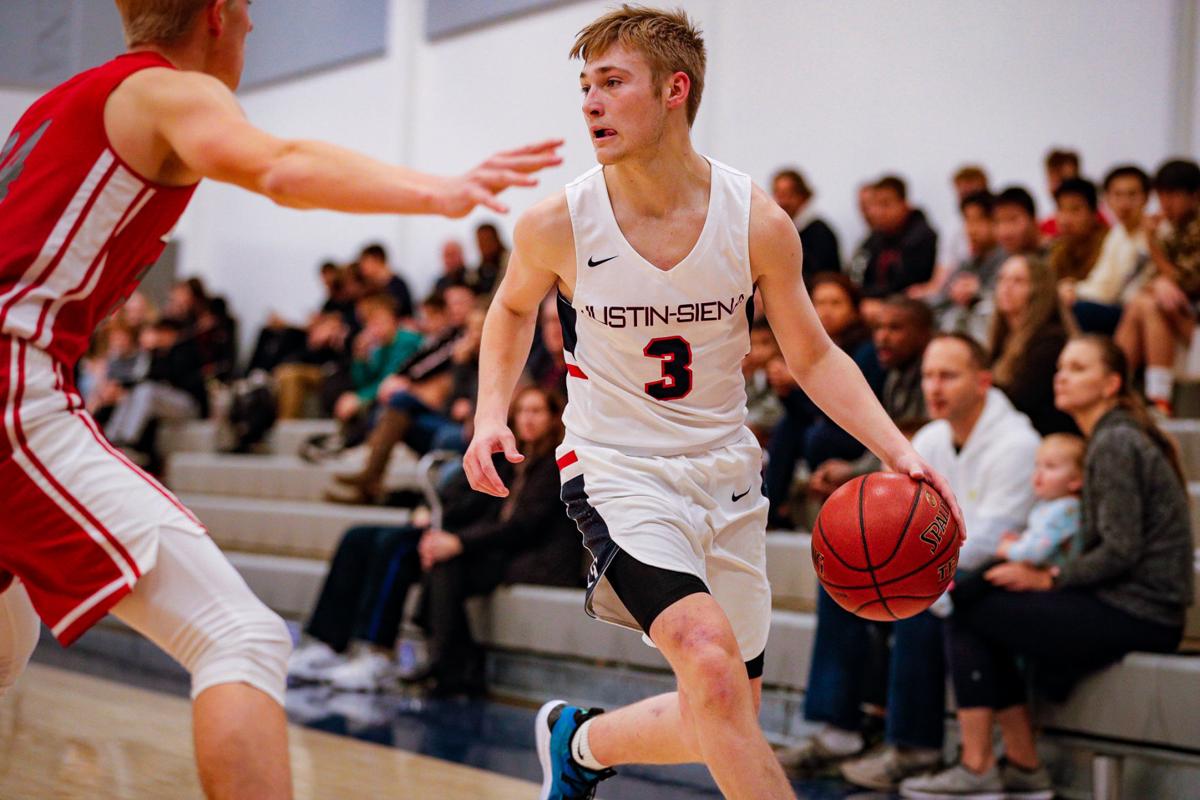 Justin-Siena senior Zach Johnson moves to the corner before shooting a 3-pointer against visiting El Molino's Patrick Atkinson on Dec. 9. 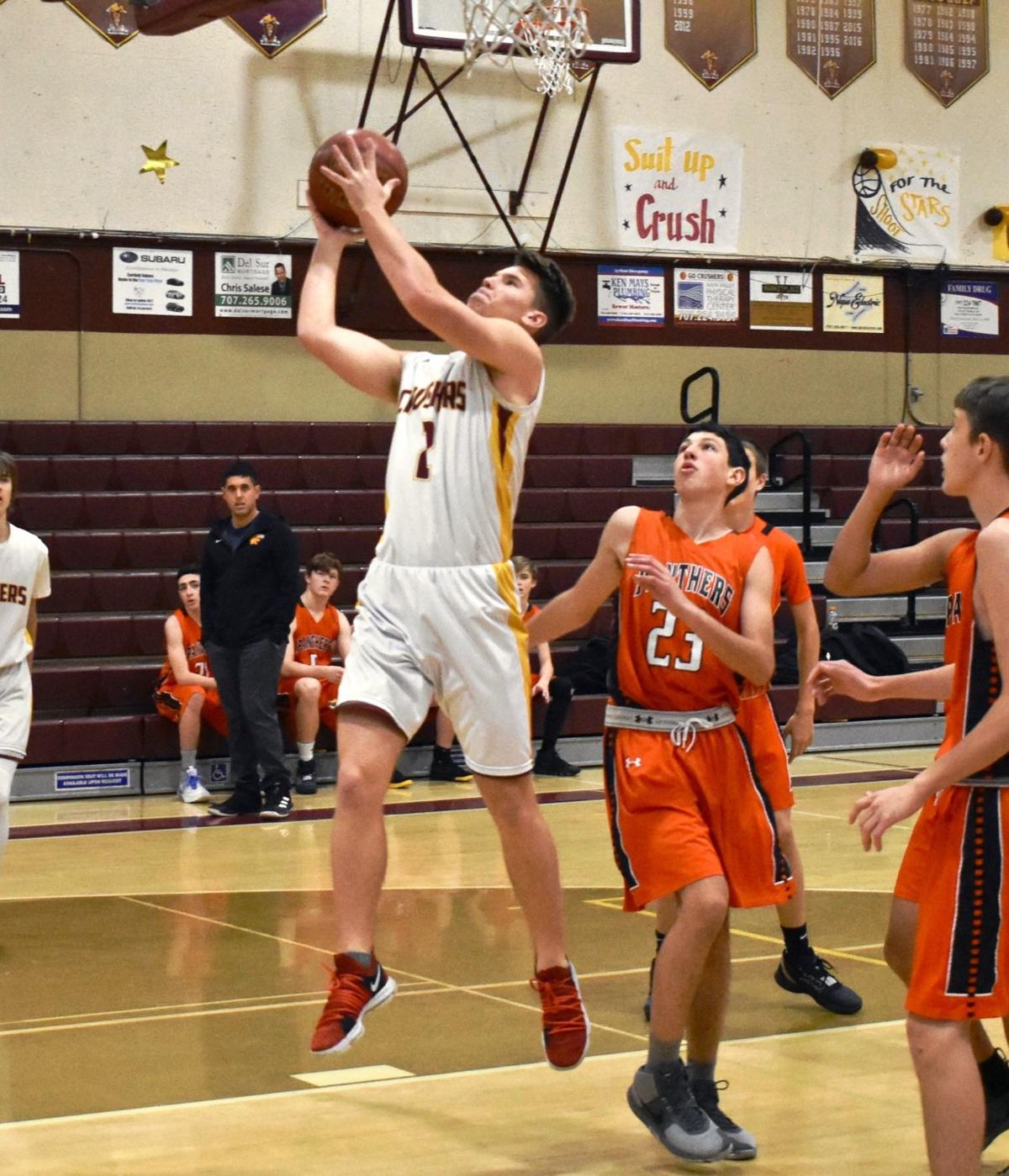 Sam Gomez (1) grabs an offensive rebound before scoring on a putback for the Vintage High boys freshman team during a recent game against Santa Rosa.

Oliver Aandahl, Noah Simmons and Gabriel Patrick each scored 8 points to pace the fourth-place Wolves (8-10, 3-4 VVAL), who “struggled all night to find holes in the solid Braves defense,” American Canyon head coach Scott Hayburn said, and shot just 2 of 20 from behind the 3-point line.

Since beating Justin-Siena for a third straight win on Jan. 3, American Canyon has hasn’t won or lost two in a row.

“We seem to be a different team every game,” Hayburn said. “We still haven’t found the consistency we need to win on a regular basis.”

Casa Grande’s Sonny Gigliotti scored 14 points in the first quarter, most on four 3-pointers, to put the Gauchos up by 10 points at Vintage in Wednesday night’s VVAL game. It was reminiscent of last Friday’s 60-56 home loss to American Canyon, the Crushers’ first defeat on their home court all season, in which the Wolves took a 15-point lead into the second quarter.

“I thought it was deja vu all over again,” Vintage head coach Ben Gongora said “I couldn’t believe it, like ‘Here we go again.’”

But the Crushers regrouped to cut their deficit to 23-18 by the end of the quarter, punched back with a 26-point second quarter to grab a 44-37 halftime lead despite having allowed eight 3-pointers. In the second half, they held the Gauchos to one 3-pointer and outscored them 28-17 to win by 18.

“We didn’t panic,” Gongora said. “But we were thinking ‘Am Can again?’ In the huddle we said ‘No, not this time. No upsets today.’ This was a total team effort tonight, with all nine players getting minutes and all nine scoring.

“I was happy there was no let-up tonight. We fought till the end and were able put the team away. It’s so nice to see.”

It was the first game back for Nothmann, a team captain, since his “devastating leg injury” in November, Gongora said. “He continues to be so positive and is getting better every day. I love that kid.”

The Crushers will host Justin-Siena, which beat American Canyon on Wednesday, at 7 p.m. Friday. Vintage won the first Battle of Trower Avenue, 46-37, three weeks ago.

“We are expecting a battle,” Gongora said. “It’s go time.”

Wolves head coach Travis Behn said his team took 20 shots on goal, but that his player of the game was center defender Sage Jimenez.

“She had her best game of the year,” Behn said. “She was breaking people down and distributing the ball and providing us more attack opportunities. Every time it got out of their side, she would shut it down and get it to our attackers.

“We were on their side most of the game and seven of our players had shots. We just couldn’t get it in, but Tanya (Rivas, junior midfielder) hit the crossbar in the second half.”

After edging the Braves 1-0 in American Canyon (6-8-3, 2-4-1 VVAL) earlier in the month, the Wolves needed another win. Now they need to beat first-place Casa Grande on Saturday or sixth-place Napa on Wednesday, both at home, to reach the postseason.

“Some of the windows are closing now,” Behn said of the Wolves’ playoff hopes. “We have to win half of our league games or half of our Division II games. A tie doesn’t hurt, but it doesn’t help.”

The Gauchos (6-0-1 VVAL), tied for first place with Petaluma, came to Memorial Stadium on Wednesday night and blanked the fourth-place Crushers (6-8-2, 2-3-2 VVAL). Vintage will visit Justin-Siena on Friday night.

The Dragons scored twice in the first half and blanked the visiting Grizzlies (4-8-3, 1-5-1 VVAL) on Wednesday night.

The Crushers (10-3, 5-1 VVAL) had to forfeit Wednesday’s game at Sonoma Valley, for their first loss in two years of VVAL play, because of “team discipline issues,” co-coach Javier Covarrubias said.

The Crushers (13-7, 5-2 VVAL) avenged a 40-29 loss to Casa Grande and pulled into a tie for second place with the Gauchos at home Wednesday night.

Anthony Notaro had 11 points in the fourth quarter, matching Casa’s total scoring as Vintage outscored the Gauchos 18-11 in the quarter.

“Our full-court man press the entire game wore them out,” Vintage head coach Chuck Johnson said. “Bryce Powers held their top scorer to 6 points. The entire team contributed to the win with their defensive effort.”

Cole Capitani had 13 points and 12 rebounds for his fourth double-double of the season, and Daniel Mitchell had 7 points.

The Crushers (12-6, 4-3 VVAL) lost a heartbreaker Wednesday at home. Vintage went into the locker room down by 8 points and came out on fire in the third quarter, outscoring Casa Grande 27-10 to take control of the game.

But the Gauchos clawed back to get to within 3 with under a minute to go, banked in a 30-footer at the buzzer to send the game into overtime, and rode the momentum to victory.

Elias Alvarez had a season-high 17 points and pulled down 11 rebounds to lead the Crushers. Sam Gomez scored 10, Ben Jackson had 9 points and Sam Loomis scored 6. The Crushers host Justin-Siena at 4 p.m. Friday.

The Wolves raced to a 45-10 halftime lead and didn’t look back at Justin-Siena on Wednesday night.

“They put on a devastating show of basketball excellence,” Justin-Siena coach Bruce Halverson said of the Wolves. “In all phases of the game, American Canyon was the superior team. From their smothering halfcourt defense to their aggressive attacking of the basket on offense, they were running on all cylinders.

“We struggled against this type of pressure applied on both ends of the court. We played as hard as we could for as long as we could, with all players getting an opportunity on the court.”

Vintage High senior Dominic Smith will take a 35-10 record to the state meet after placing second at 220 pounds at the NCS Wrestling Championships this weekend.

Four Napa Valley wrestlers are competing in the state meet this weekend.

The Crew honored their seven seniors and two McDonald's All-Americans during Crush in the Valley II over the weekend. They also improved to 26-3 on the season.

Justin-Siena senior Zach Johnson moves to the corner before shooting a 3-pointer against visiting El Molino's Patrick Atkinson on Dec. 9.

Sam Gomez (1) grabs an offensive rebound before scoring on a putback for the Vintage High boys freshman team during a recent game against Santa Rosa.